Mexico: Go with the Cozumel Flow

When you think of a place that makes your heart happy, what comes to mind?

For me, it’s a sunny island surrounded by lots of water. 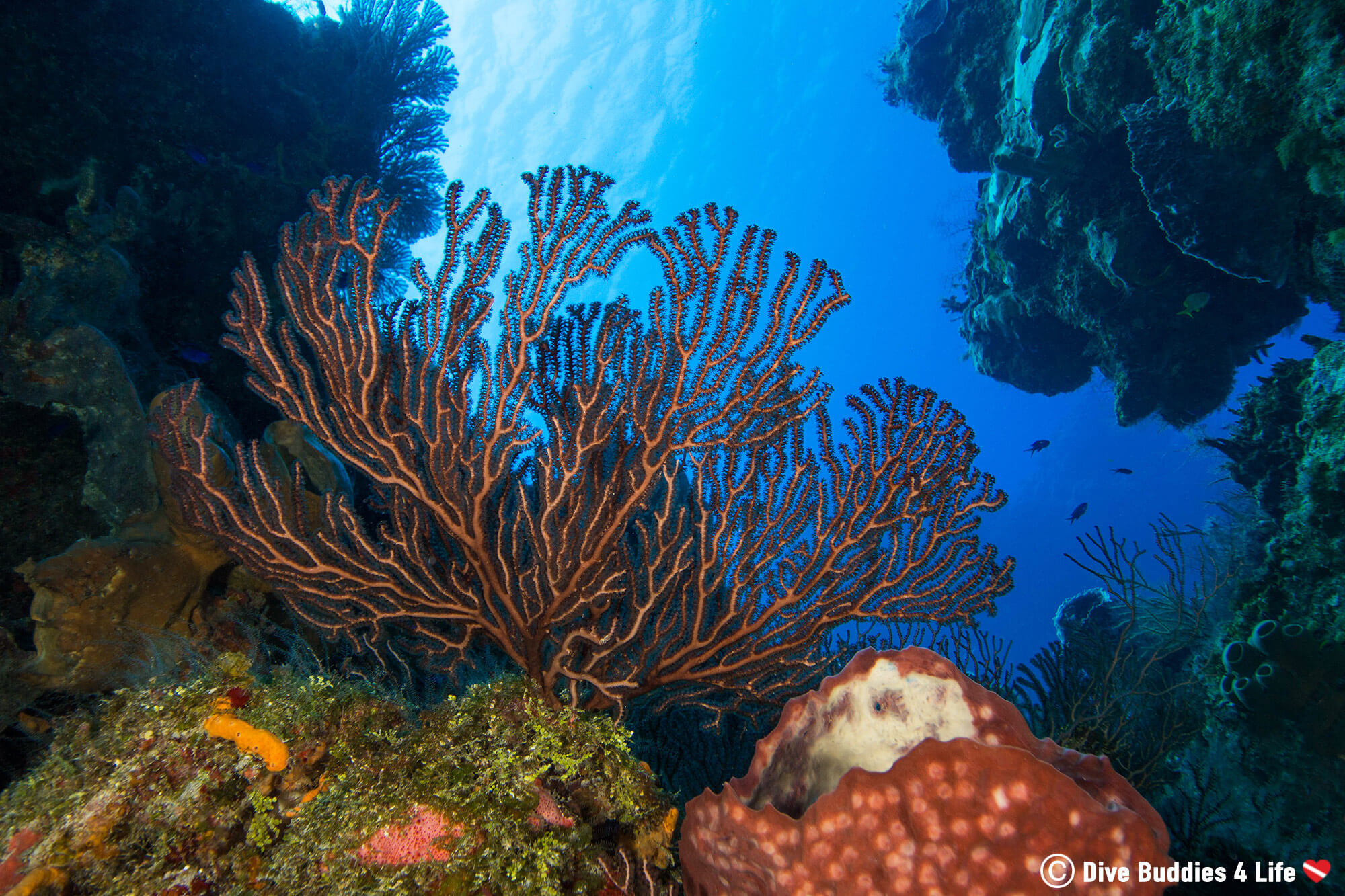 The Island of Cozumel

When people first think of Mexico, most picture the world-famous Mayan pyramids and all-you-can-eat-tacos. Every year millions of visitors travel to this southern country to take advantage of the warm weather and all-inclusive resorts. But for the adventurous, Mexico has more flavor than food and historic monuments.

Cozumel is one of the most relaxing tropical islands in Mexico, with its stunning cyanic blue waters and stark white beaches. Located 16 kilometers east of the Yucatan Peninsula, just off the coast of Playa del Carmen, this island is the perfect coastal getaway. From seaside vibes, delicious restaurants, zesty culture and everything in between, there are many ways to experience this slice of Mexico. But one of the best ways to enjoy Cozumel remains through scuba diving. 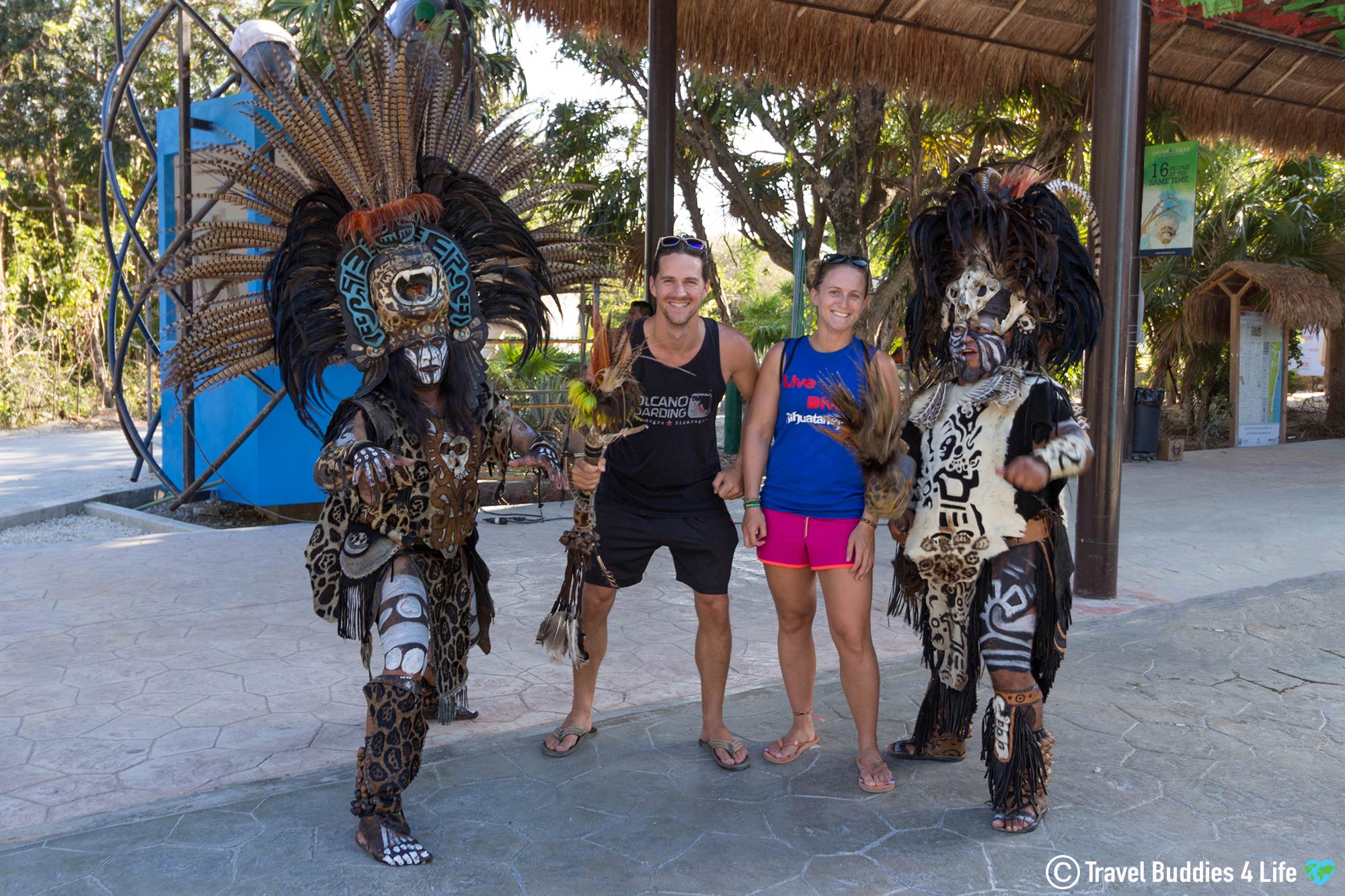 As one of the go-to scuba diving islands in Mexico, Cozumel, has the second largest coral reef system in the world. In fact, Cozumel’s Mesoamerican reef system spans over 1,000 kilometers from the Gulf of Mexico to the coast of Honduras. This massive reef is home to 26 coral species and over 500 species of fish. Suffice to say that reefs and marine wildlife are an integral part of the island’s identity. 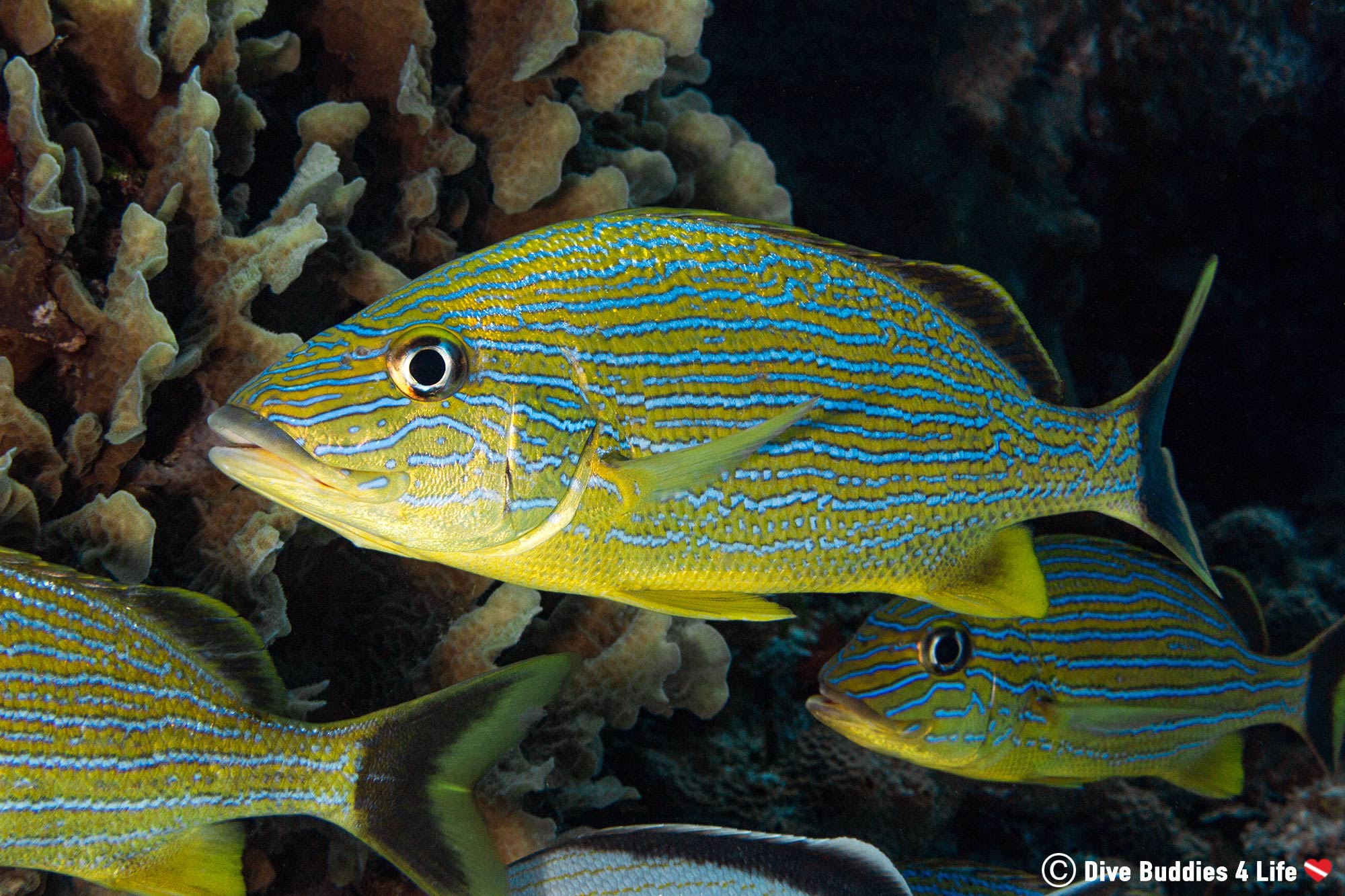 Heading out onto the Water

Several winters ago, Joey and I ferried over to Cozumel for the chance to explore this world’s best when it comes to scuba diving.

It was mid-morning less than 24 hours after docking in Cozumel. As surprising as it may seem, both Joey and I found ourselves boarding the dive boat in antsy anticipation of heading out into the Caribbean sea. We were warned by our divemaster that strong current and little protection meant that we should be ready for some of the speediest drift diving we have ever done.

It took about 40 minutes to zip across the sapphire surface to our diving location along Cozumel’s western shore. 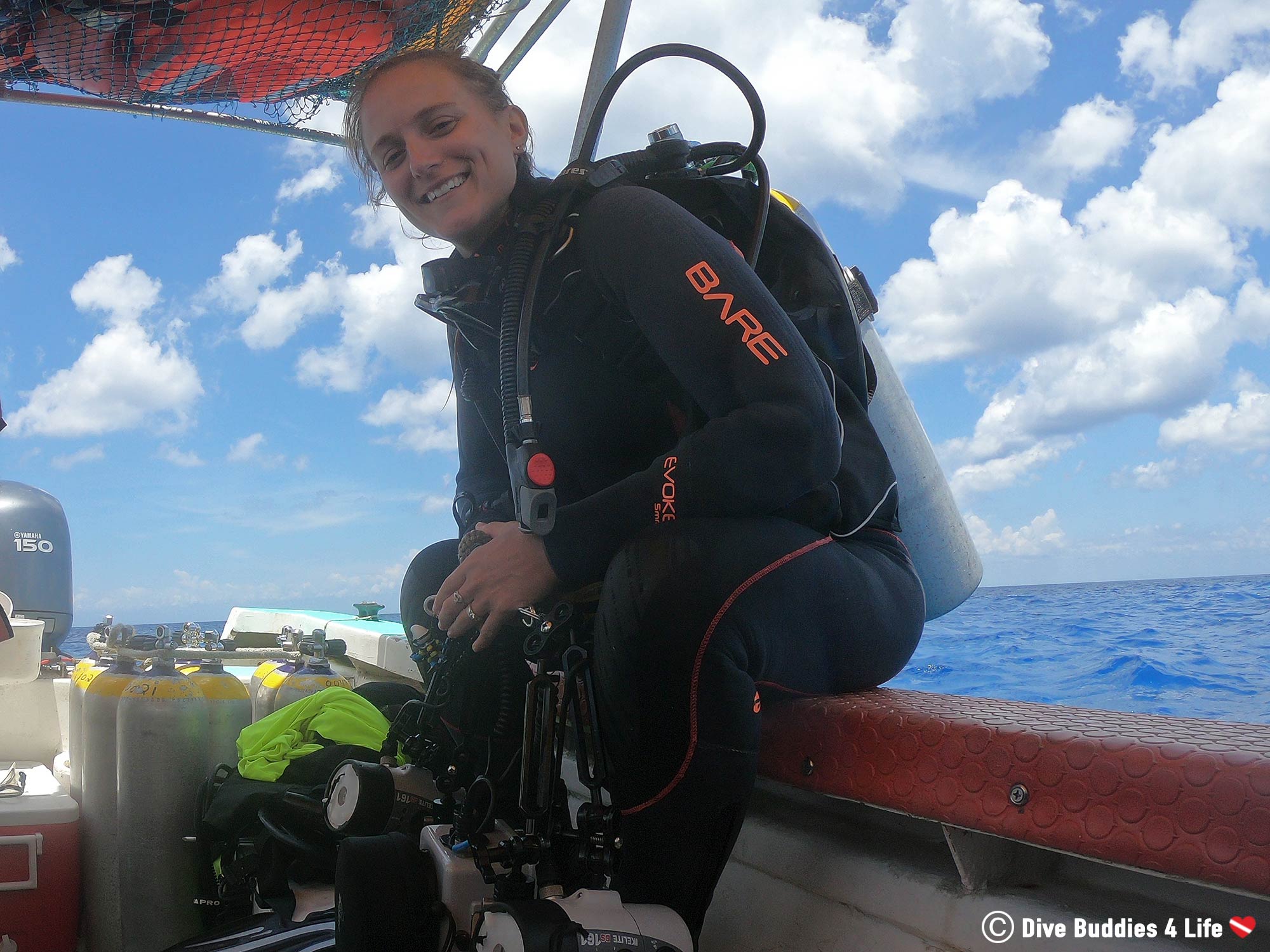 Columbia Wall is a relatively remote region that is often the longest to reach by boat. As the name fails to suggest, Columbia’s dive sites consist of a series of towering pillars of coral, some of which span over 20 meters (66 feet) tall.

Almost the instant we backrolled off the dive boat I could feel myself being whisked away along the drift. Conditions underwater were speedy and the current was flowing. Dropping from the sunny surface to the sea bed, I kicked against the current towards Columbia’s chain of gigantic coral-encrusted pinnacles. 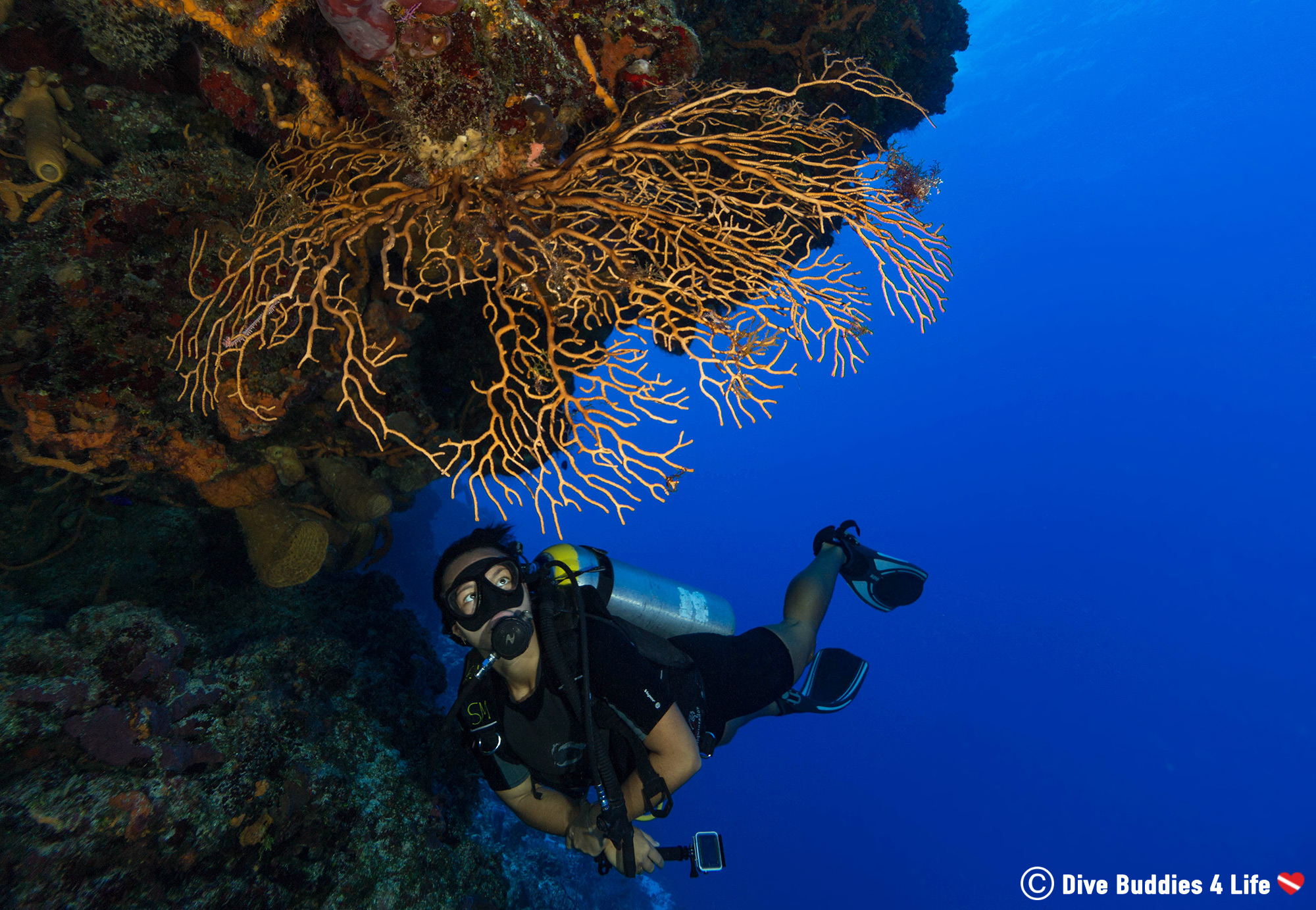 Once in the shelter of these coral-riddled pillars, I began unfolding my camera wondering “how the heck am I going to capture some shots in such strong current?” It took a lot of fine-tuning, but eventually, I became accustomed to photographing in a fast-paced environment and managed to start capturing some decent shots. As we zig-zagged about the coral-encrusted pillars, I found lots of baitfish flickering in the sunlight. Moving my mask closer to the formations I observe blennies poking out of soccer ball size brain coral and crabs confidentiality holding their position between the sponges. The constant frenetic activity of blue tangs and other tropicals made the reef feel saturated with macro life. It was interesting to just float and observe fish diversity.

After getting comfortable shooting wildlife, my next challenge was coordinating photo ops with Joey, which was easier said than done. 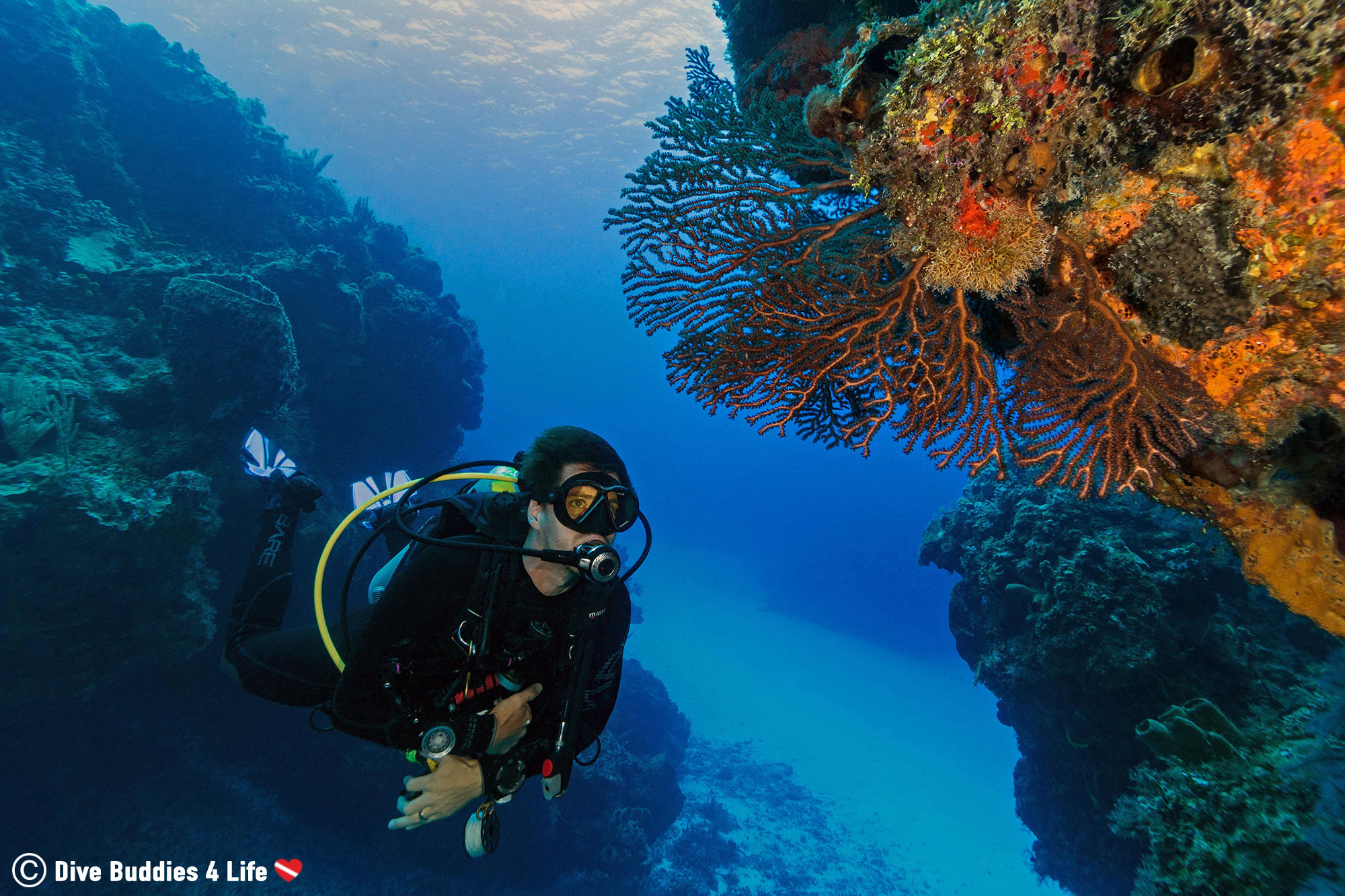 Much like Columbia, the Santa Rosa Wall is another region of Cozumel’s reef, with drift diving sites that carry divers past ledges dropping down into infinite depths. The wall begins at 15 meters (50 feet) cascading off into the Caribbean abyss. 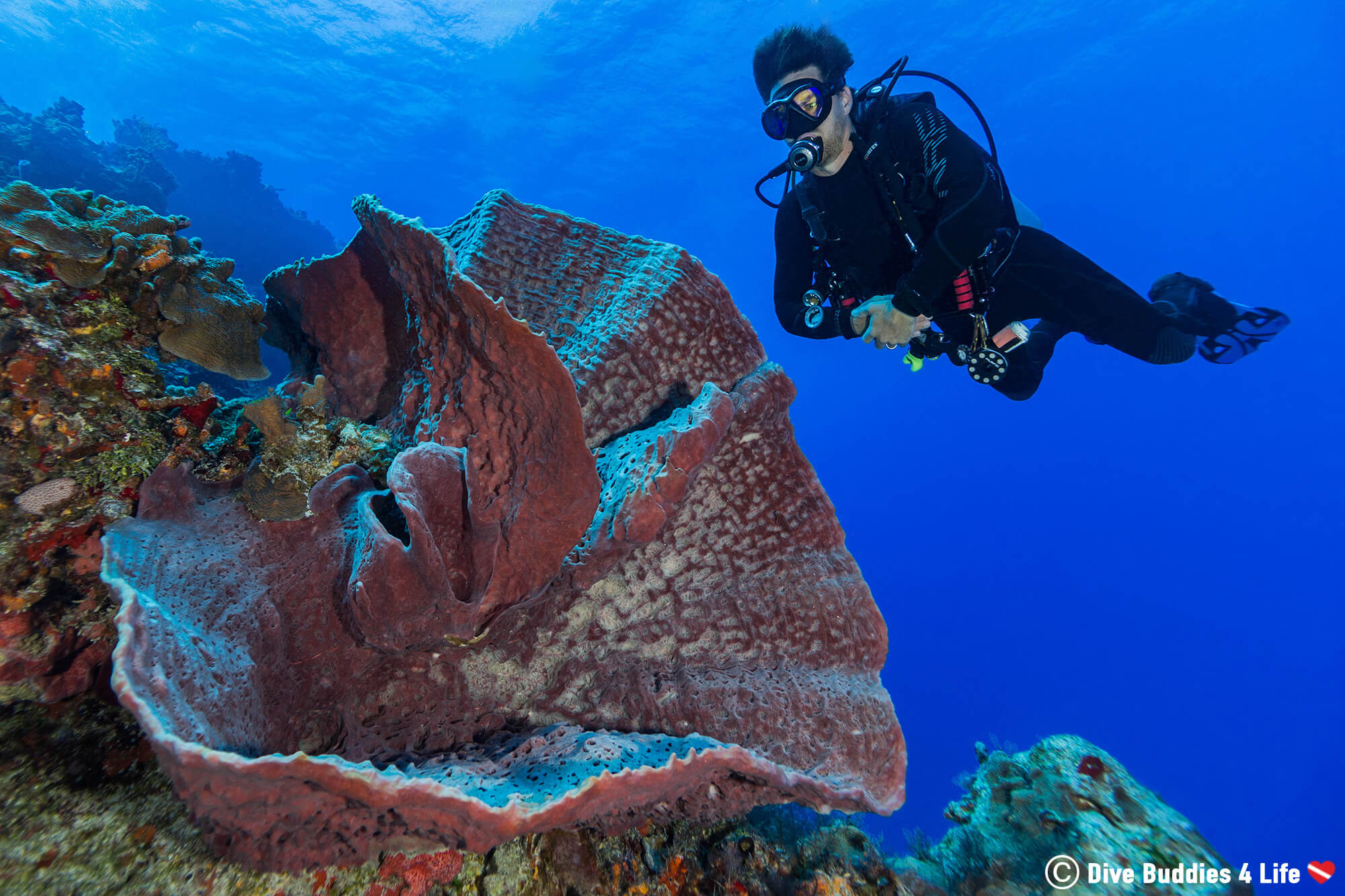 Along the vibrant segment of Santa Rosa, I enjoyed absorbing the watery world around me. I gaze up at the dramatic cliff-like underwater vistas and marveled. Overhangs framed with massive sponges made for great photo-ops. Small schools of rainbow-colored fish frolicked in the flow of the ocean, springing from one mound of coral to another in the distance. Branches of coral hung down from the low-lying shelves. Overhead, the surface buzzed with dive boats, each one holding a dozen divers eager to explore Cozumel’s celebrated reefs. My mind was overwhelmed by the dizzying activity all around me. 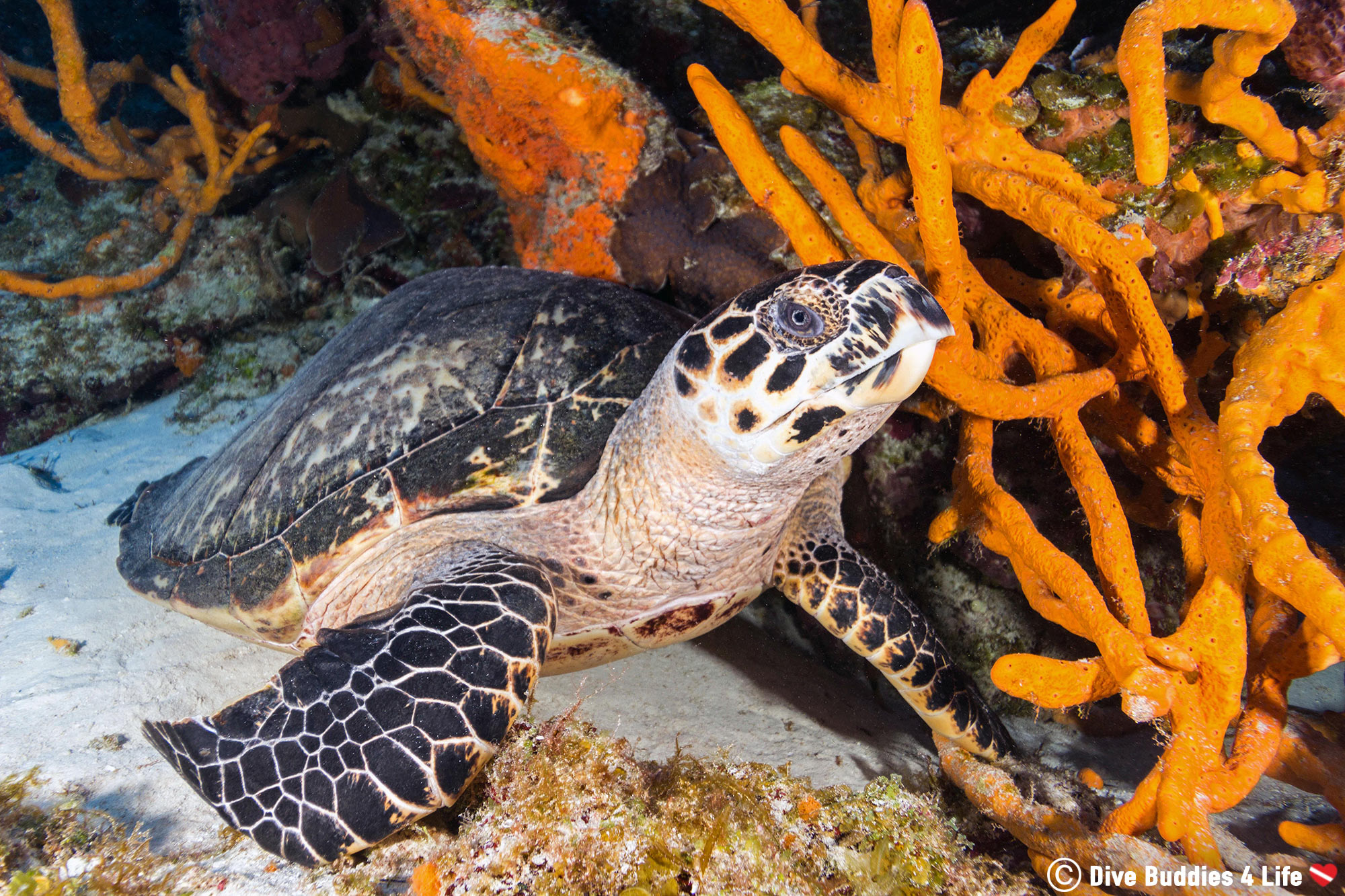 Punta Sur Reef is a fascinating shallower reef when compared to dive sites along the Columbia and Santa Rosa Walls. The dive sites along this segment of the island consist of lower-lying walls, swim-throughs and caverns bursting with life.

Our group enjoyed weaving in and out of Punta Sur’s sharp rock formations looking for critters and other encrusting life. Some of my most interesting finds include several schools of yellow grunt, a magnificent queen angelfish and some electric blue chromis (Chromis cyanea). The tail end of one of our dives on this reef even afforded us a fleeting glimpse at the largest spotted eagle ray I have ever seen. The body alone was both wider and longer than me.

While not as photogenic or spectacular as Columbia and Santa Rosa, I enjoyed dabbling in macro photography along the Punta Sur Reef as I found the current to be less powerful. 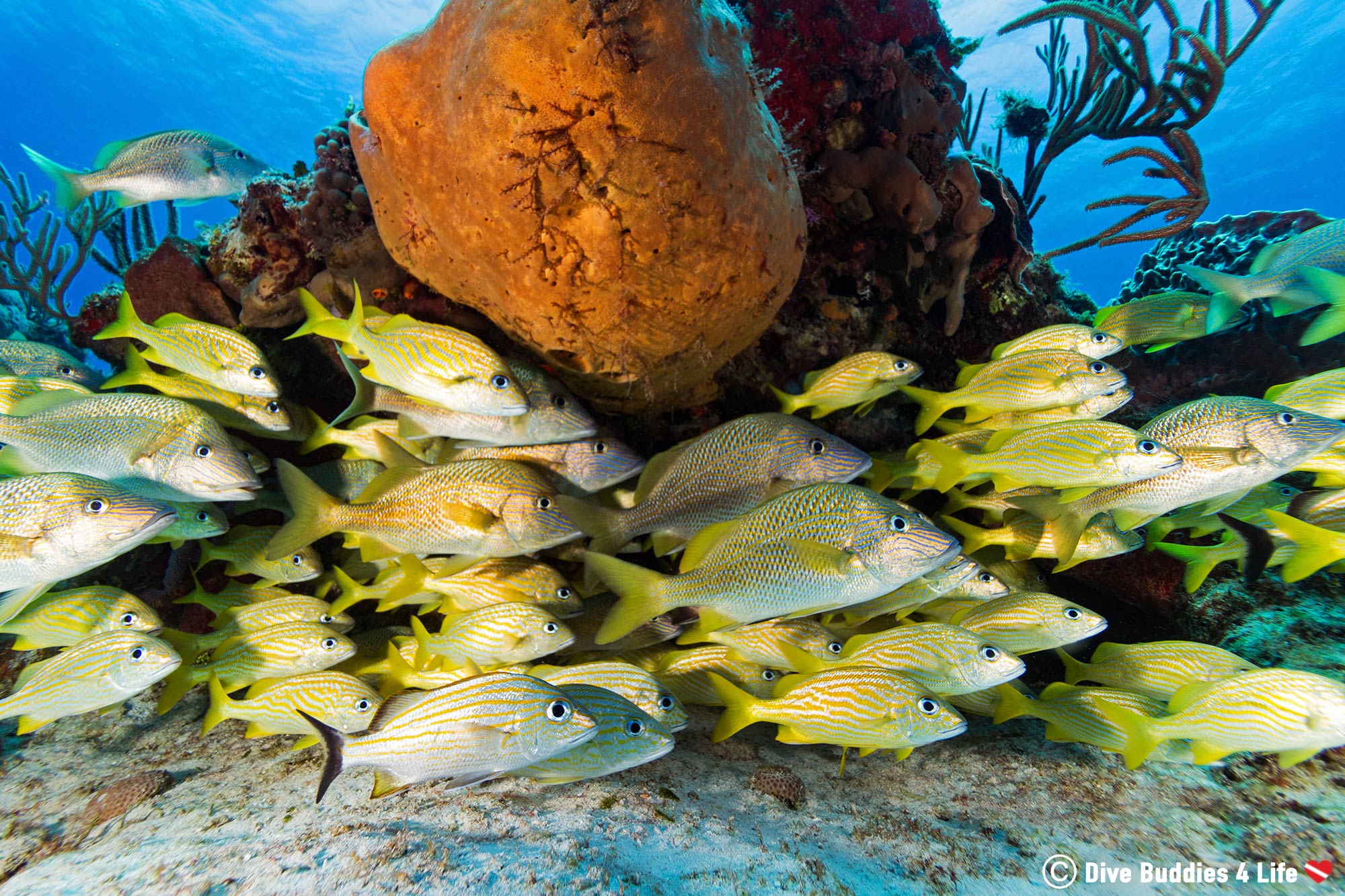 Felipe Xicotencatl or the C-53 is an admirable-class minesweeper formerly known as the USS Scuffle, built-in 1994 for the Navy during World War II. After 55 years of service, the C-53 was decommissioned in 1999 and donated to the Cozumel underwater park for use as an artificial reef. It remains Cozumel’s only shipwreck. 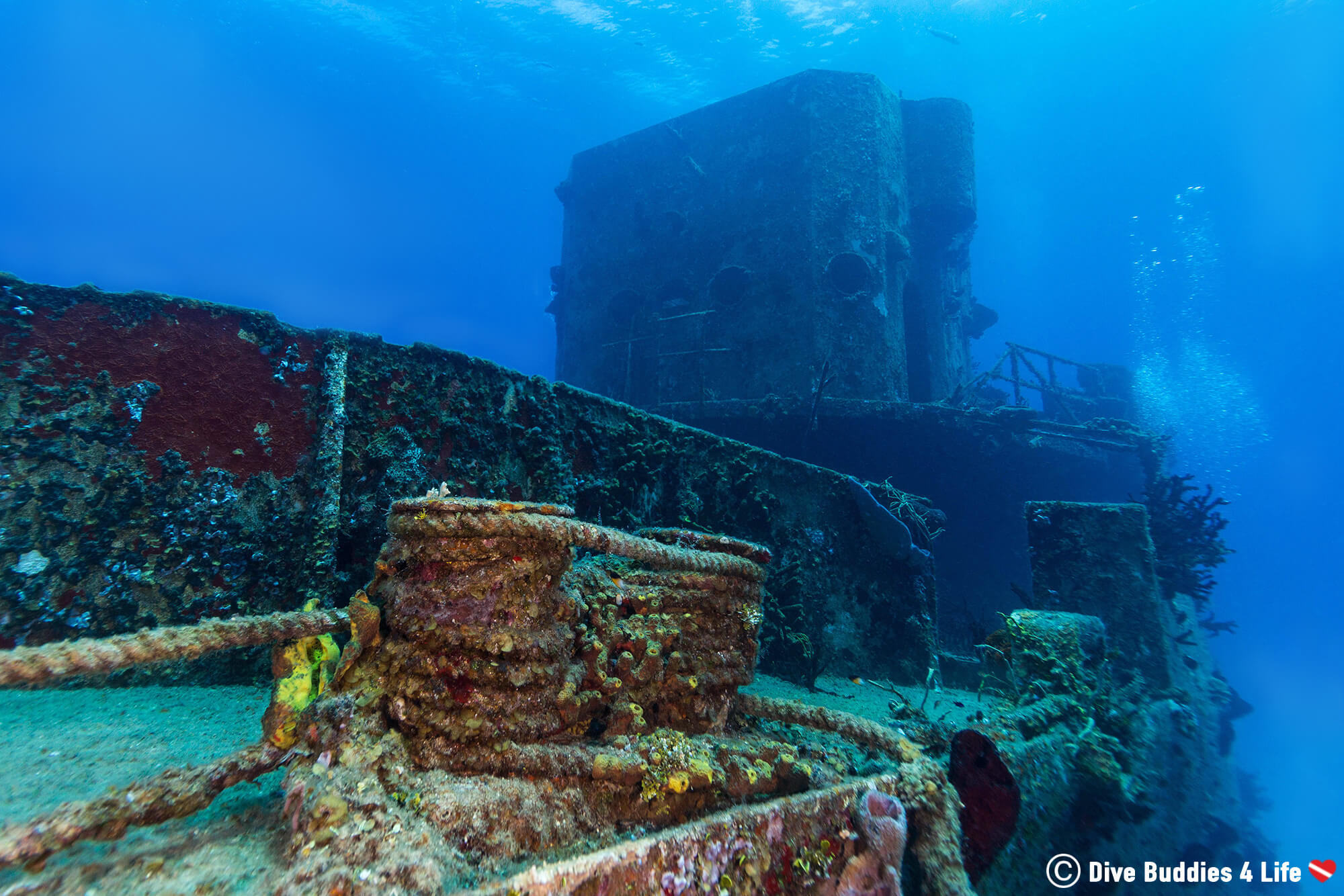 For our dive on the ship, Joey and I followed the guideline down to the sandy bottom. At first the ship showed as a looming dark mass in the distance, but as we approached the man-made structure, bits and pieces began to stand out in the sunkissed water. Felipe Xicotencatl was sitting in a perfectly upright position and had a towering superstructure that dwarfed us at 12 meters (40 feet) above. Looking at the hull of the ship I could see what was once a sheet of metal completely etched in geometric shapes of sponge and coral.

Along the port side of the ship, I got to poke my head into the various overhead compartments, checking out the crew quarters and the head. It was captivating to look into the dark internals of the ship. Tonnes of silverfish seemed to find refuge within the confines of the C-53. As I dragged my torch from right to left, the fish bodies sparkled like glittering confetti under the beam of my flashlight. 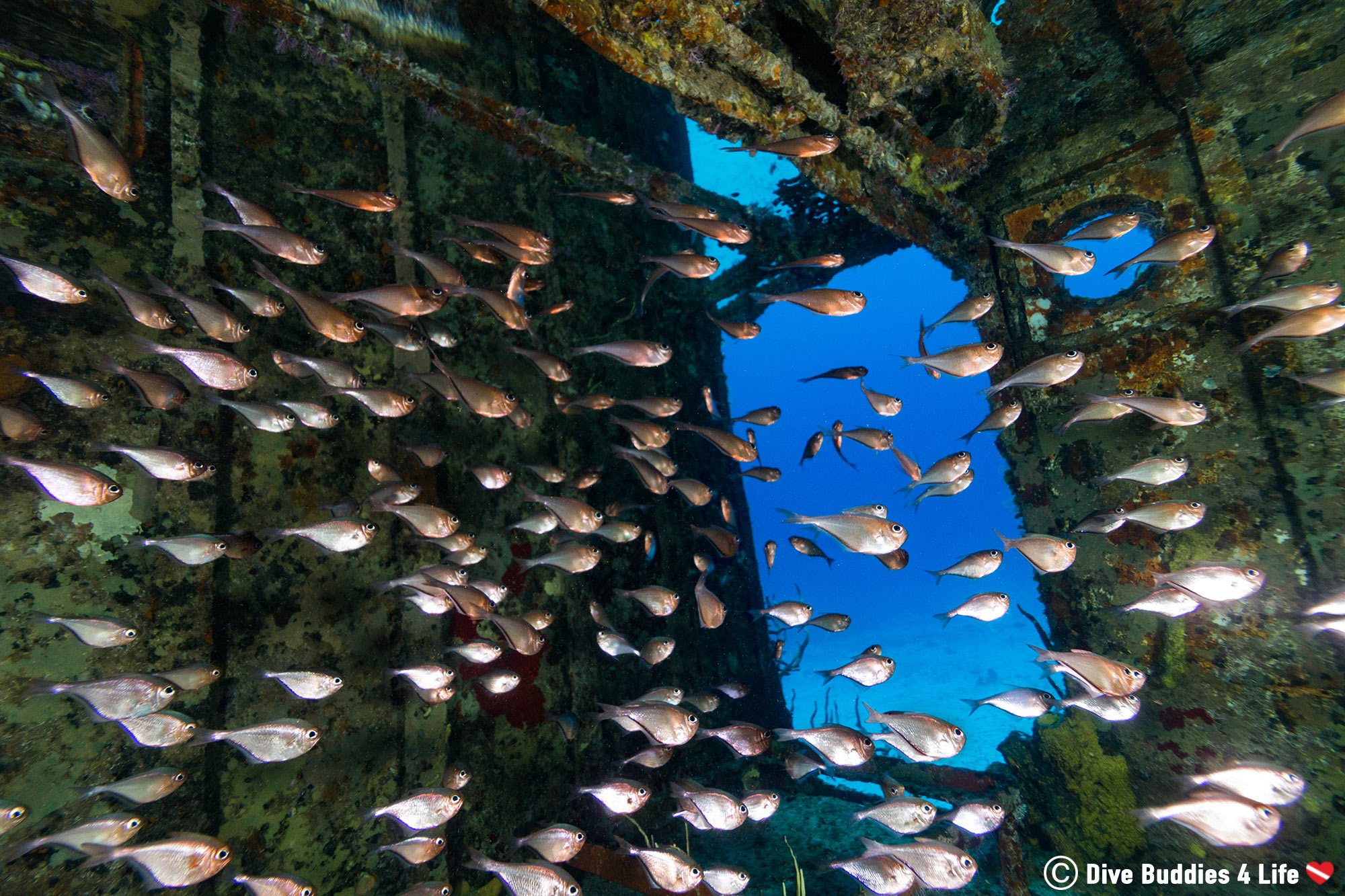 We spent close to an hour on the bottom exploring the monstrosity of the Felipe Xicotencatl shipwreck. It was a sensational attraction which I could have enjoyed for the entire day if my tank would last. But as always my time was metered by the compressed air on my back.

Reflecting back on our experience, I was pretty pleased with my dive time on Cozumel. The crystal clear tropical water and rich bounty of fish are always hard to beat in a dive destination. My only reservation was the poor condition of the coral – it was definitely not the storybook reefs that I’d heard about once upon a time. Don’t get me wrong, scuba diving here is better than fabulous, however the National Marine Park that is supposed to protect the marine environment is lacking and coral reefs are an empty shadow of what they used to be.

As a popular southern island, Cozumel is a Mexican dive destination suitable for all levels of diver. Between Joey and I, we spent many hours underwater enjoying as much bottom time as our recreational diving would allow. Suffice to say, after our salt-filled weeks on the water, we came home with minor sunburn on our face and shoulders, a slew of dive footage and a longing to one day revisit this island paradise. 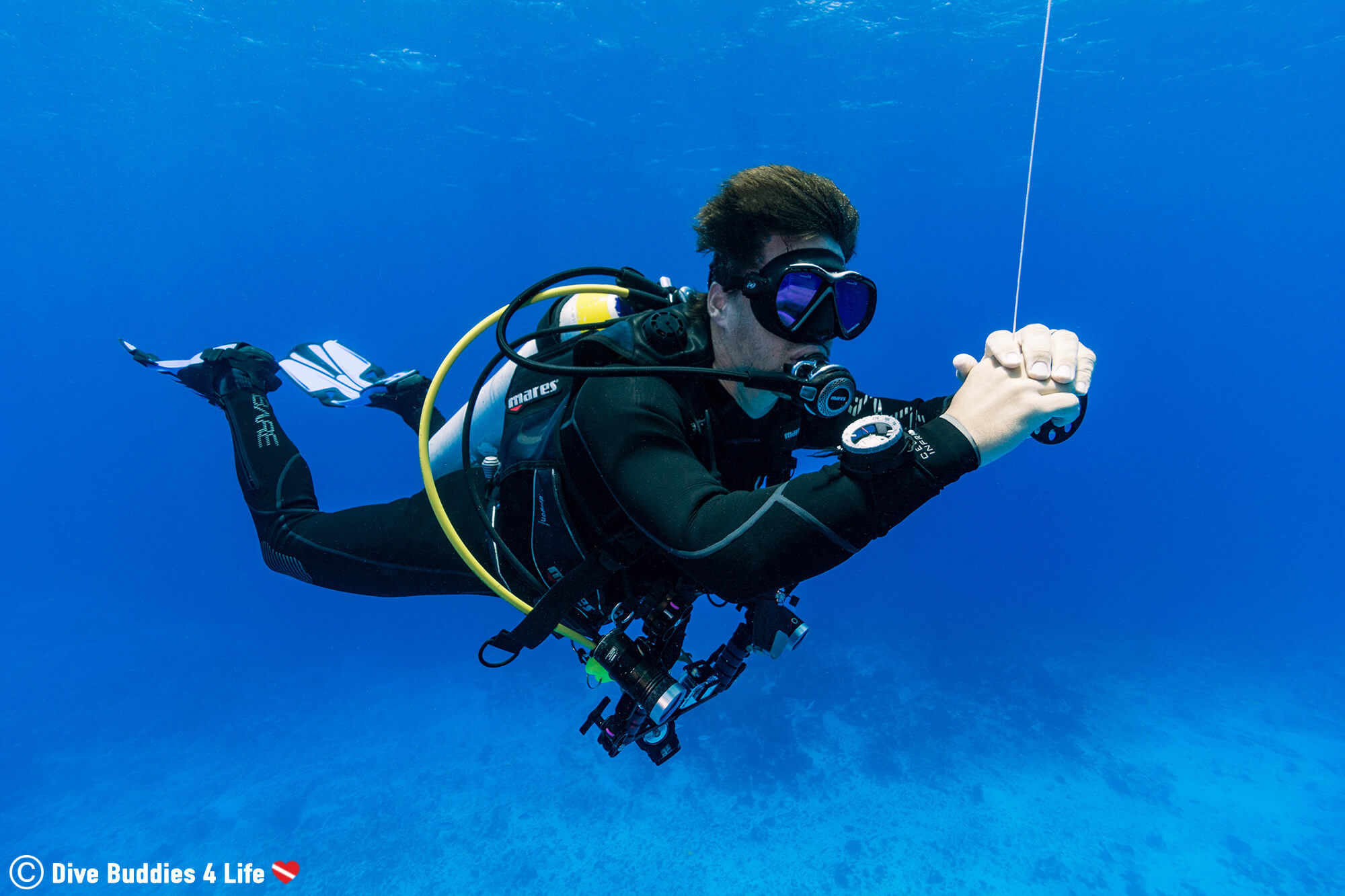 Mexico is an amazing scuba diving destination. Have you ever been diving in this country? Better yet, have you had the chance to hop over to the sunny island of Cozumel? 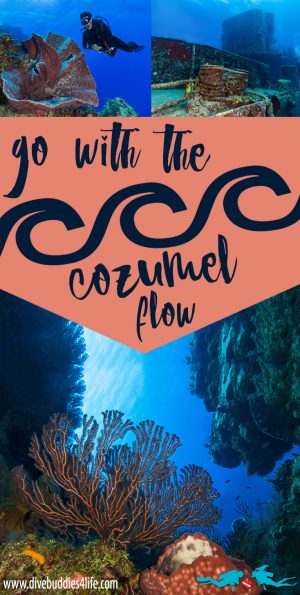