A Peek into the Alien World of Blackwater Diving

Nighttime falls over the vast open ocean. The sunlight blues and greens gradually fade to a gray then darken into an inky black. Hundreds of feet below, a multitude of fish, invertebrates, plankton, and other mid-ocean dwellers begin their nightly passage up towards the surface to feed. By daybreak, they will be gone again, sunken back down into the relative safety of deeper darker waters.

Imagine diving out in the vast open ocean with 180 meters (600 feet) of water between you and the bottom, the current dragging you along at 6.4 kilometers (4 miles) per hour and the swells rocking you up and down… Now imagine doing that in the inky blackness of night.

Blackwater diving is a type of night diving where scuba divers immerse themselves over deep channels of offshore water to witness the largest migration on the planet – the diurnal migration.

Every night millions of tiny creatures, sometimes no bigger than a grain of rice, migrate from what is known as the ocean’s twilight zone towards the surface of the ocean to feed and breed under the cover of darkness. Thanks to their particular adaptations to life at depths, these creatures range in appearance from glittering translucence to seeming like they belong in fantasy or science fiction films. 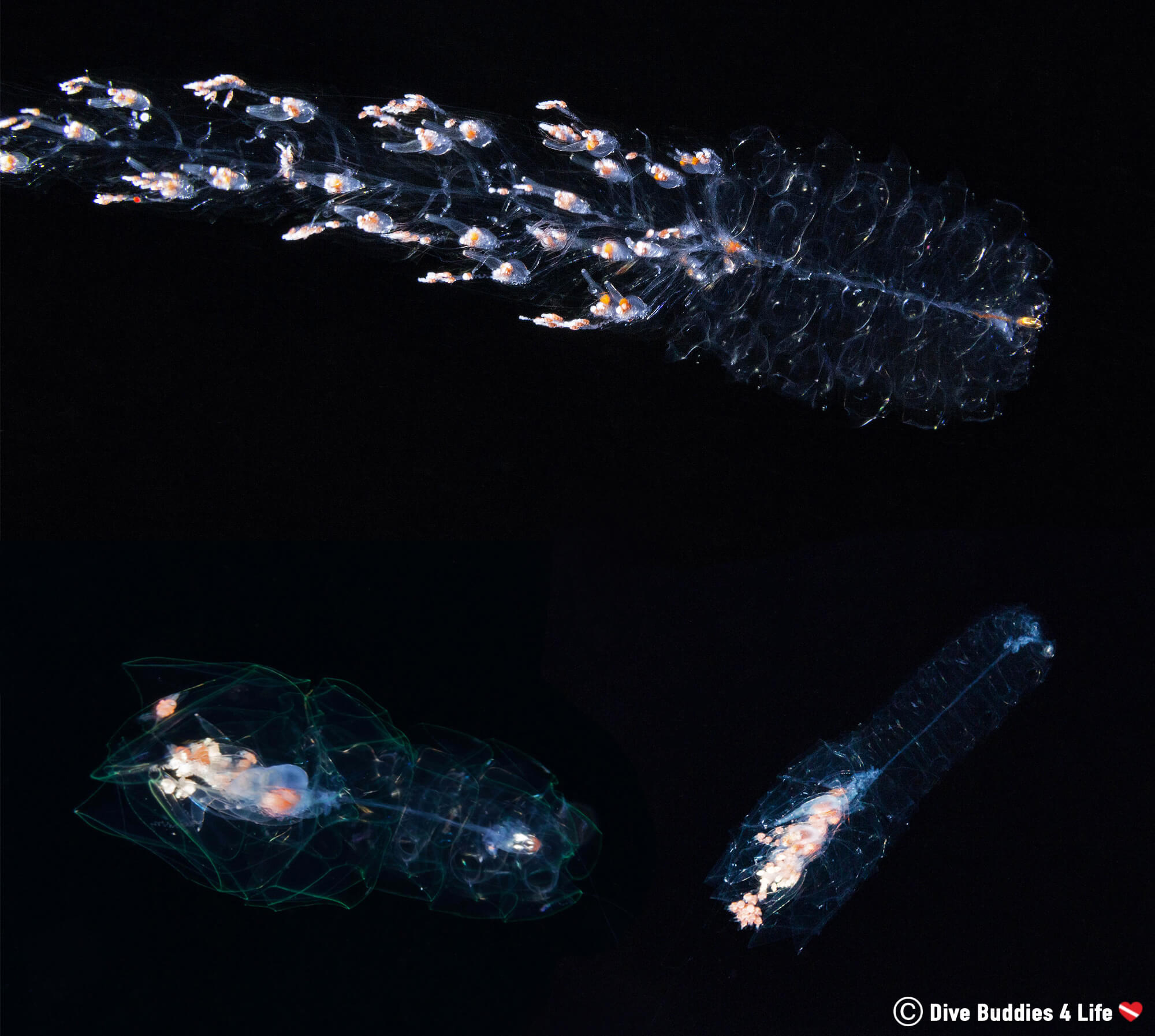 Blackwater Diving For the First Time

As a photographer, black water diving off West Palm Beach in Florida has been calling my name for some time, and I’m happy to have finally gotten the chance to take the plunge into a dark and challenging world offering a beautiful new cornucopia of macro-subjects.

What Happens on a Blackwater Dive?

Typical blackwater dives begin just before sunset when the dive boat heads to the offshore location.

Before divers begin, a weighted rope is thrown in the water suspended from a huge buoy. Variations of lighting instruments are placed along the weighted rope at 3-5 meter (10-16 feet) intervals acting as a visual reference for divers. This light also attracts blackwater subjects such as zooplankton and juvenile larvae.

Important Information: For safety reasons, in some blackwater diving locations divers may also be tethered to the buoy line or boat.

Due to the blackwater buoy’s free-floating nature, it will drift along with the current and the divers along with it. This provides a reference for the dive boat to circle and follow. 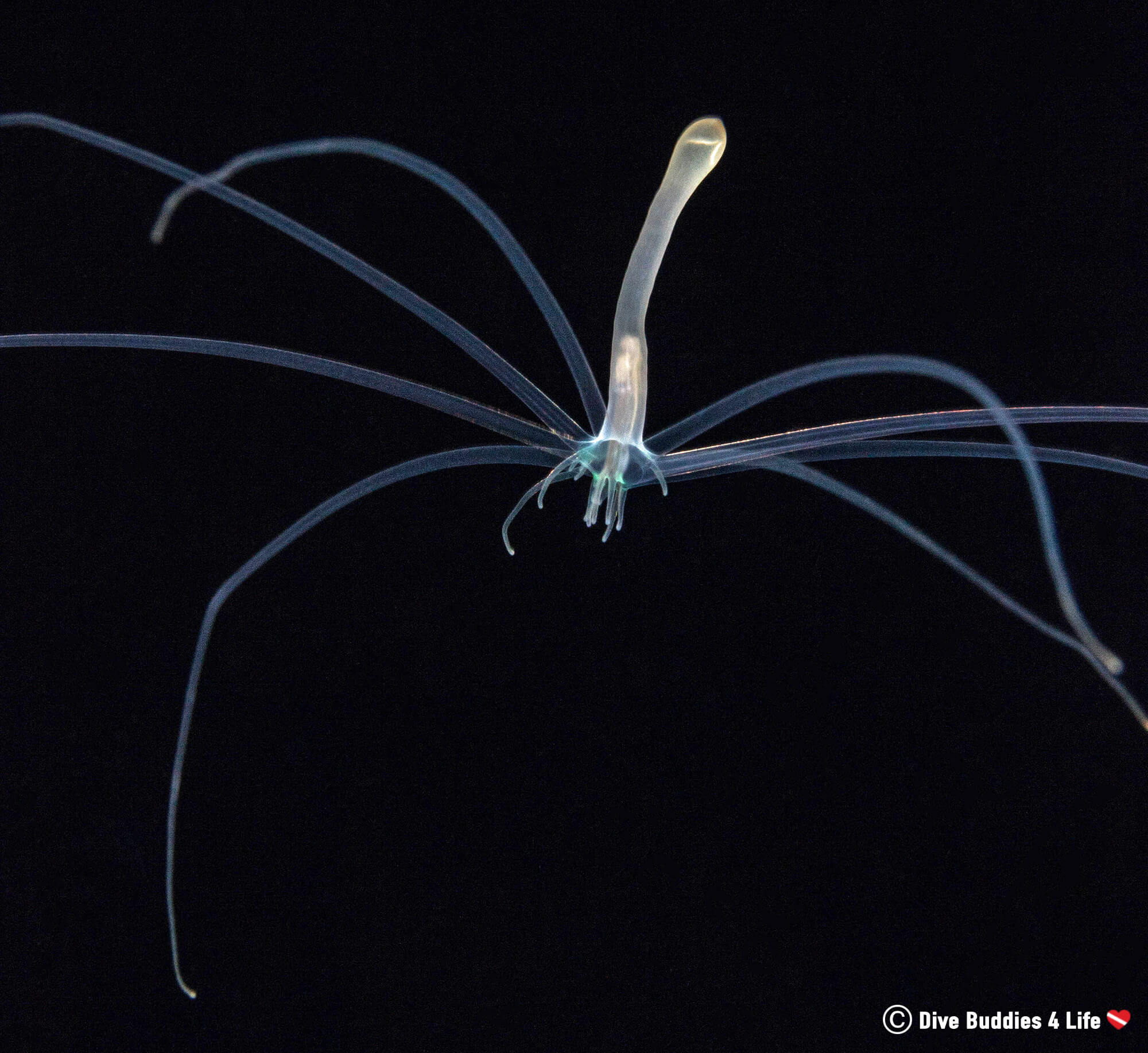 My first impression of blackwater diving was off the Florida Gulf stream’s pitch black canvas. After a few minutes settling into the dive, my eyes adjusted to the harsh darkness and I began to witness the presence of some of the ocean’s weirdest and most alien-esque creatures.

Blackwater diving is first and foremost a dive for small macro-sized critters that ascend from depths and drift with the current. This includes fish, crustacean and mollusk larvae and tiny pelagic creatures that live their whole lives in the open ocean.

Jellyfish, siphonophores and comb jellies are some of the most common blackwater encounters. There are hundreds of different types in many different shapes and sizes.

Larval and juvenile species are also a welcomed sighting on a blackwater dive. I often find myself wondering; what the heck is that? as they can have such strange appearances at different stages in their life. 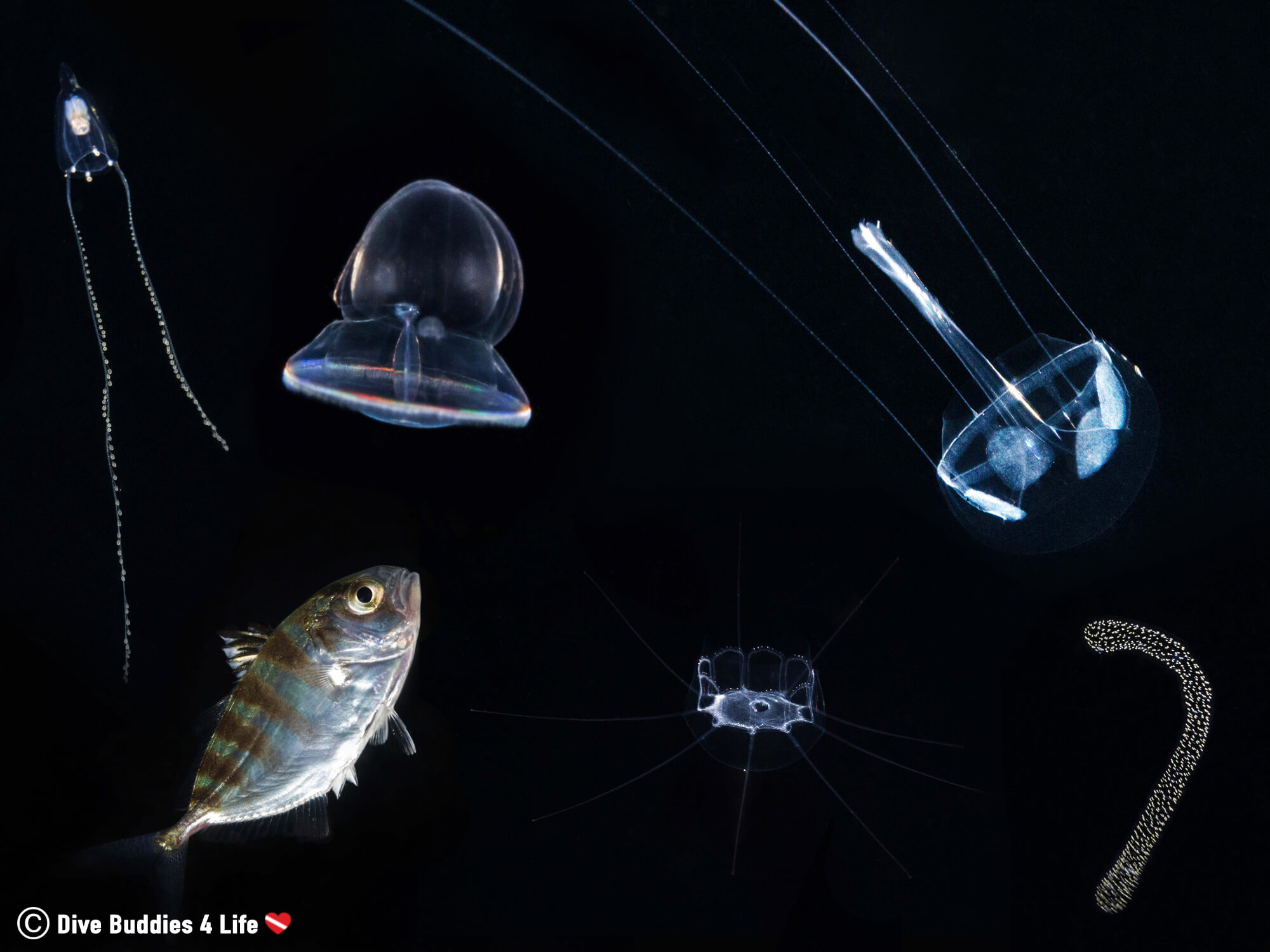 How to Find and Photograph Blackwater Subjects

Finding your subject in blackwater can be tricky. Ideally you would be diving with a dedicated buddy who can find and point out various subjects in the water column while you photograph them. However this is seldom the case as the vast majority of blackwater divers are there to photograph.

One of the next-best ways to do a blackwater dive is to position your back to the illuminated dive buoy and troll the water with a small handheld beam. Itty-bitty animals can be found all over the place but some of our more interesting critters were found within the 6 to 12-meter (20 to 40-foot) range.

Once you spot your subject approach slowly as the slightest vortex of water can collapse or swoosh your delicate subject away from you.

After approaching your subject allow the focus lights of your camera to take over from your trolling torch. Depending on the translucency or opacity of your subject you might want to increase or decrease the intensity of your strobes before taking a shot.

Gearing up for our first blackwater dive with @pura_vida_divers . We can’t wait to see what’s floating in the Gulf Stream.

For a successful black water dive, weather conditions have to be near perfect as scuba divers will be placed under the cover of darkness in the open ocean. This includes not just wave and current action but also how hard the wind is blowing affecting boat drift and diver safety. Luckily blackwater dive shops know their limits and will often take care of these logistics.

Another blackwater consideration is the moon cycle. Studies have actually shown that on a night with a full moon, organisms will not migrate up as far in the water column as they would with a new or no moon. 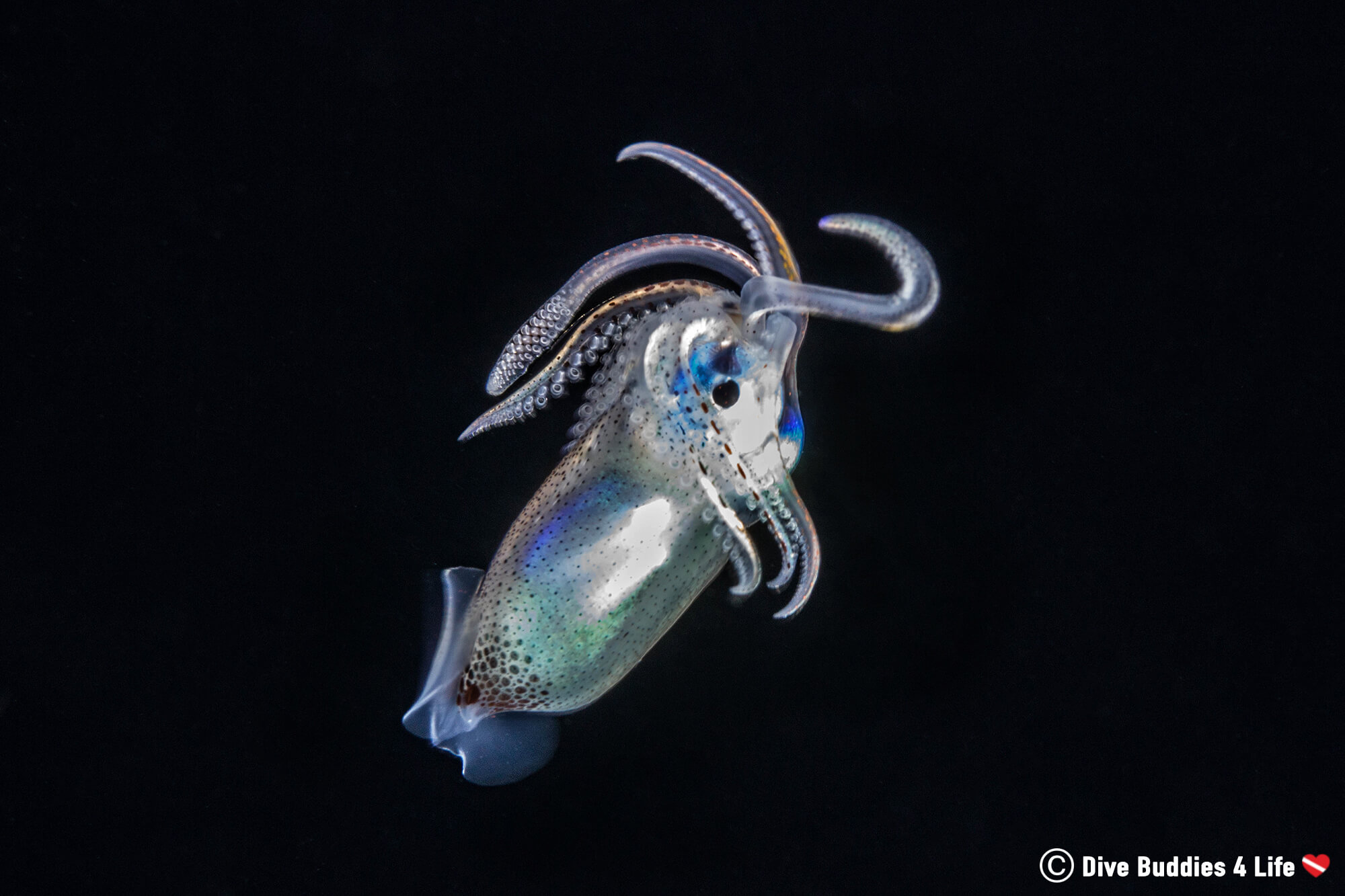 Simply going out on a night dive is not considered blackwater diving. There are certain topography parameters that create an optimal environment for the diurnal migration. “Blackwater diving” means going out at night over the deep ocean where billions of small species undertake this vertical migration.

Some of the best places across the world to do blackwater diving include: 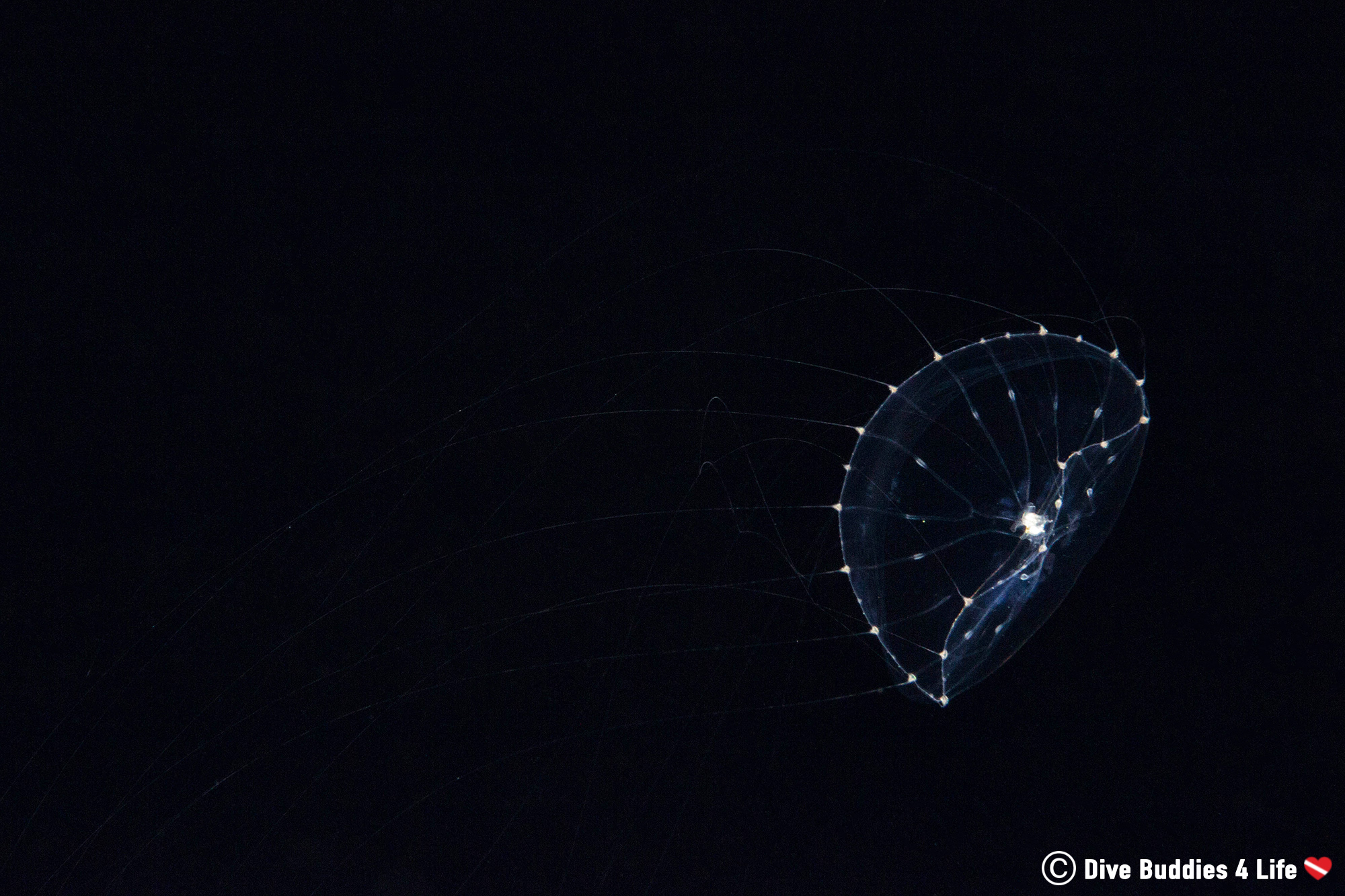 Diving by day can be pretty exciting, but diving by night is another thrill entirely.

Blackwater diving is a must-try for any underwater photographer. Aimlessly floating in a vat of blackness looking for minuscule pelagic magic is a sensation in itself. While challenging at first, after speaking to others with more experience and asking for advice, the photographs and experience from blackwater diving are so rewarding.

It’s thrilling, it’s unique and it’s as close to being in space as it gets. 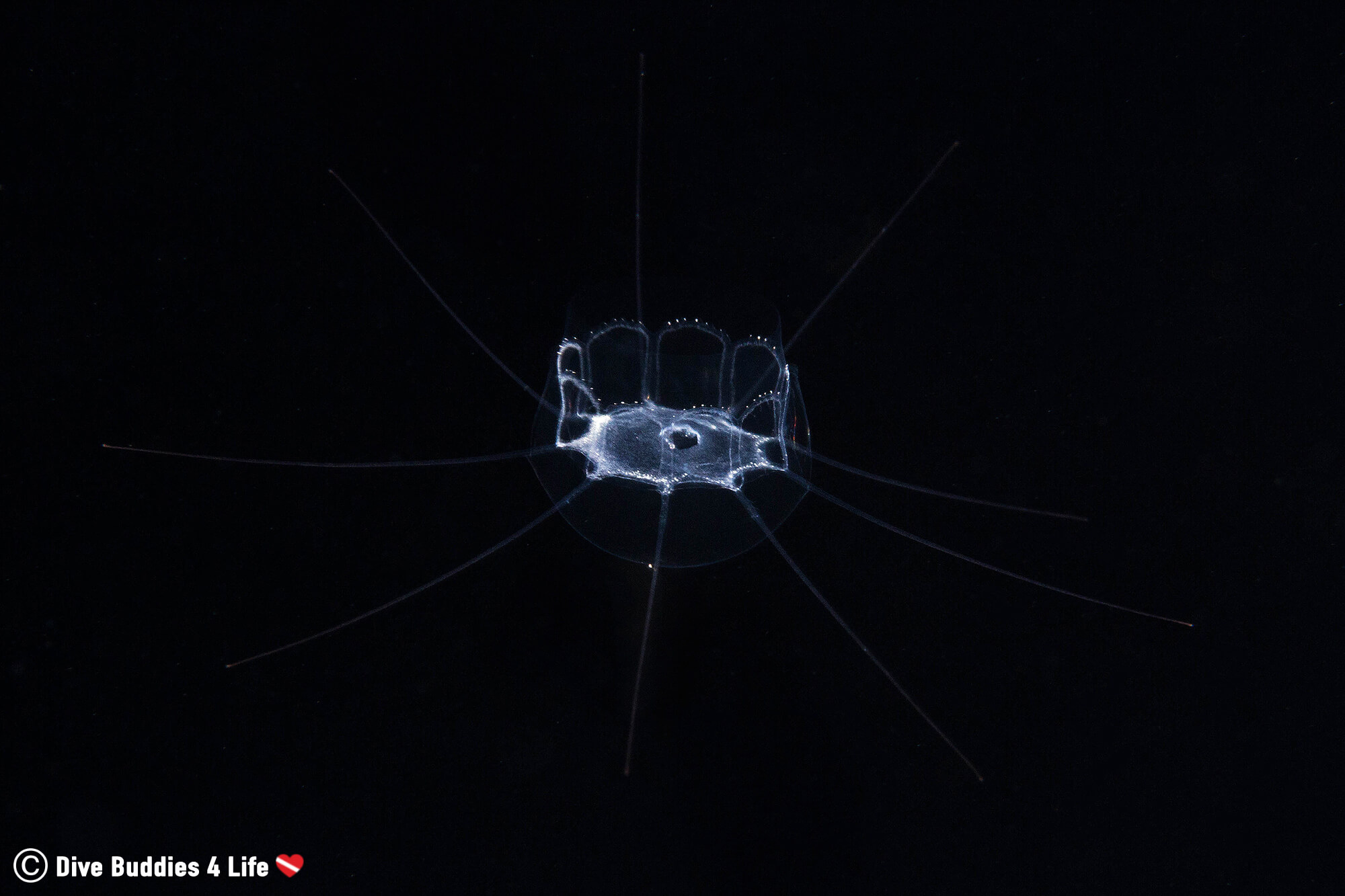 Have you ever experienced a blackwater dive? If so, where? How did you feel getting into the dark water in the middle of the deep ocean to float aimlessly along with the tide? 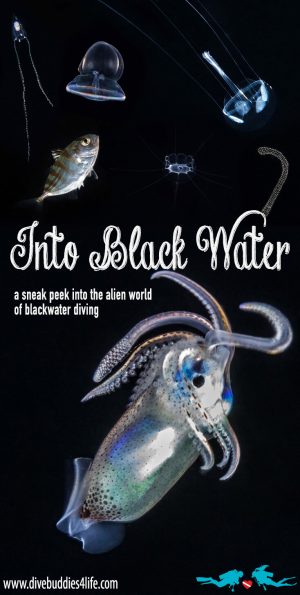