Heart pumping in your ears, adrenaline coursing through your veins, and the slice of a triangular dorsal fin cutting through the water…

When most people begin scuba diving, they often have some preconceived notions about ocean animals, particularly sharks. But contrary to popular belief, sharks aren’t the blood-thirsty, man-eating monsters the media has made them out to be.

Jupiter is known in the United States as the mecca of shark diving. Here the underwater world isn’t just great – it’s mighty!

Thanks to the depths and proximity with the warm productive Gulf Stream, an oceanic superhighway, the Atlantic coast of Jupiter displays an abundance of wildlife and relatively consistent sea conditions. Schools of fish, sea turtles and large groupers call this coastal city home. And where there is a productive region with a large host of marine life, there’s bound to be apex predators.

Large numbers of sharks congregate in Jupiter year round, but it’s not just the sharks and the consistency of sighting them that make this US dive location so appealing. It’s the high profile species such as Tiger, Hammerhead, and Lemon that migrate through the area. 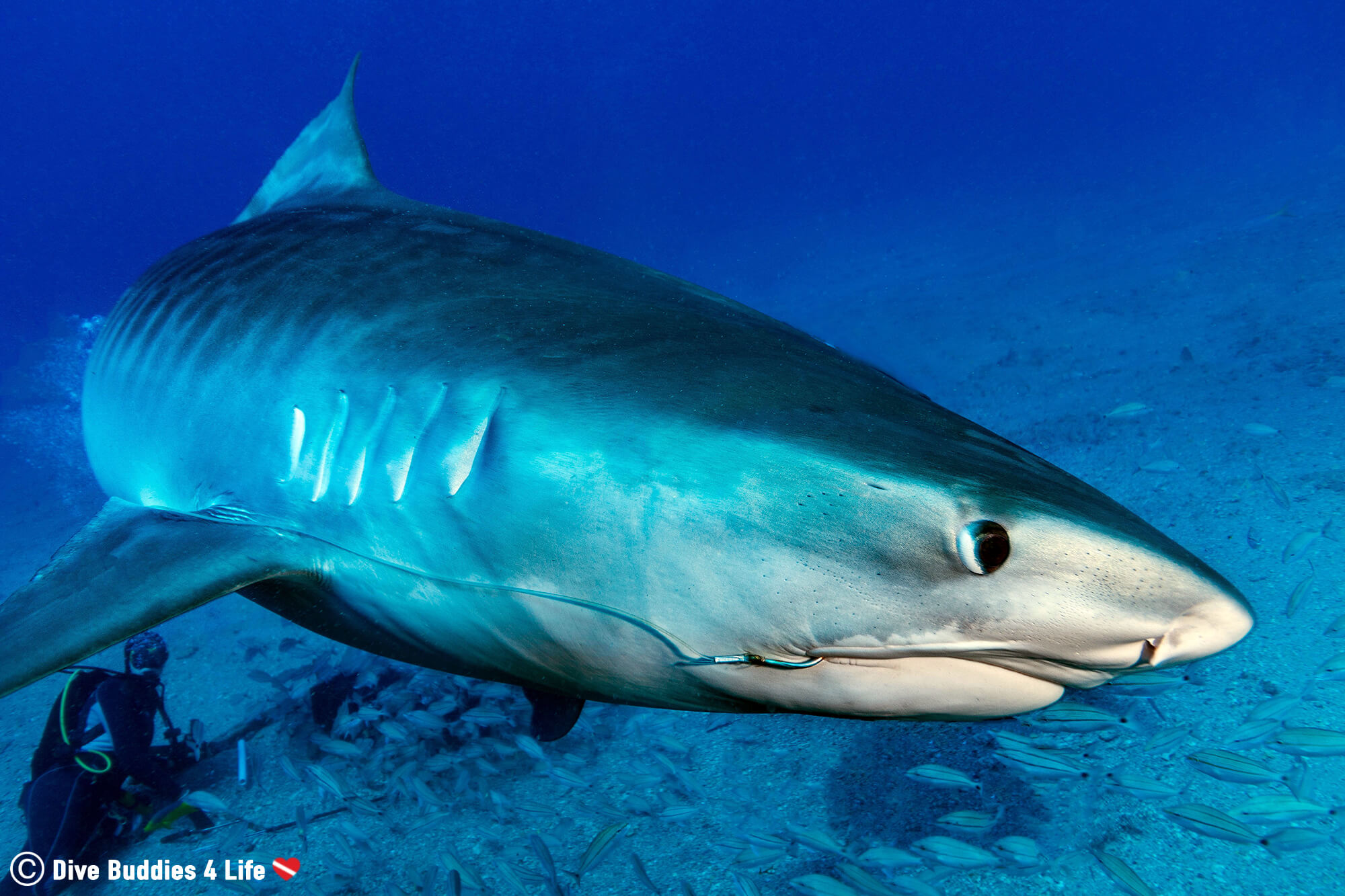 Due to powerful Gulf Stream currents, the style of diving in Jupiter is always drift dives. Here, advanced divers hit the water with negative buoyancy and sink down into the abyss, wasting no time at the surface. Typical depths range from 18 to 30 meters (60 to 100 feet), some dives reaching the sandy bottom while other are done free floating in blue water.

Beyond plain old drift diving, infamous shark feed dives are also a popular style of dive in this region. 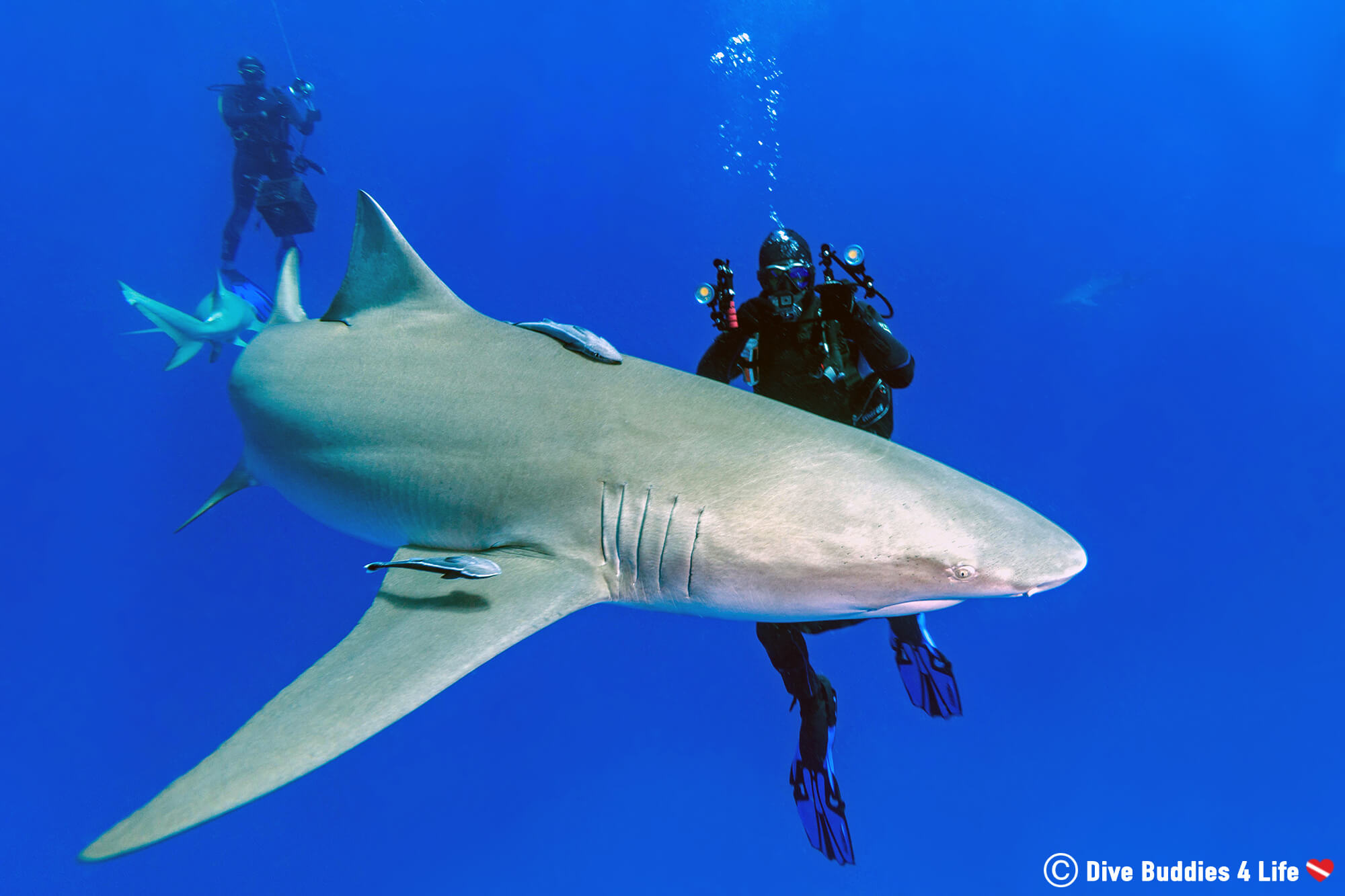 What is a Shark Feed Dive?

As the name implies, shark feeding dives, are dive adventures where the surrounding megafauna is given food in one of three ways; 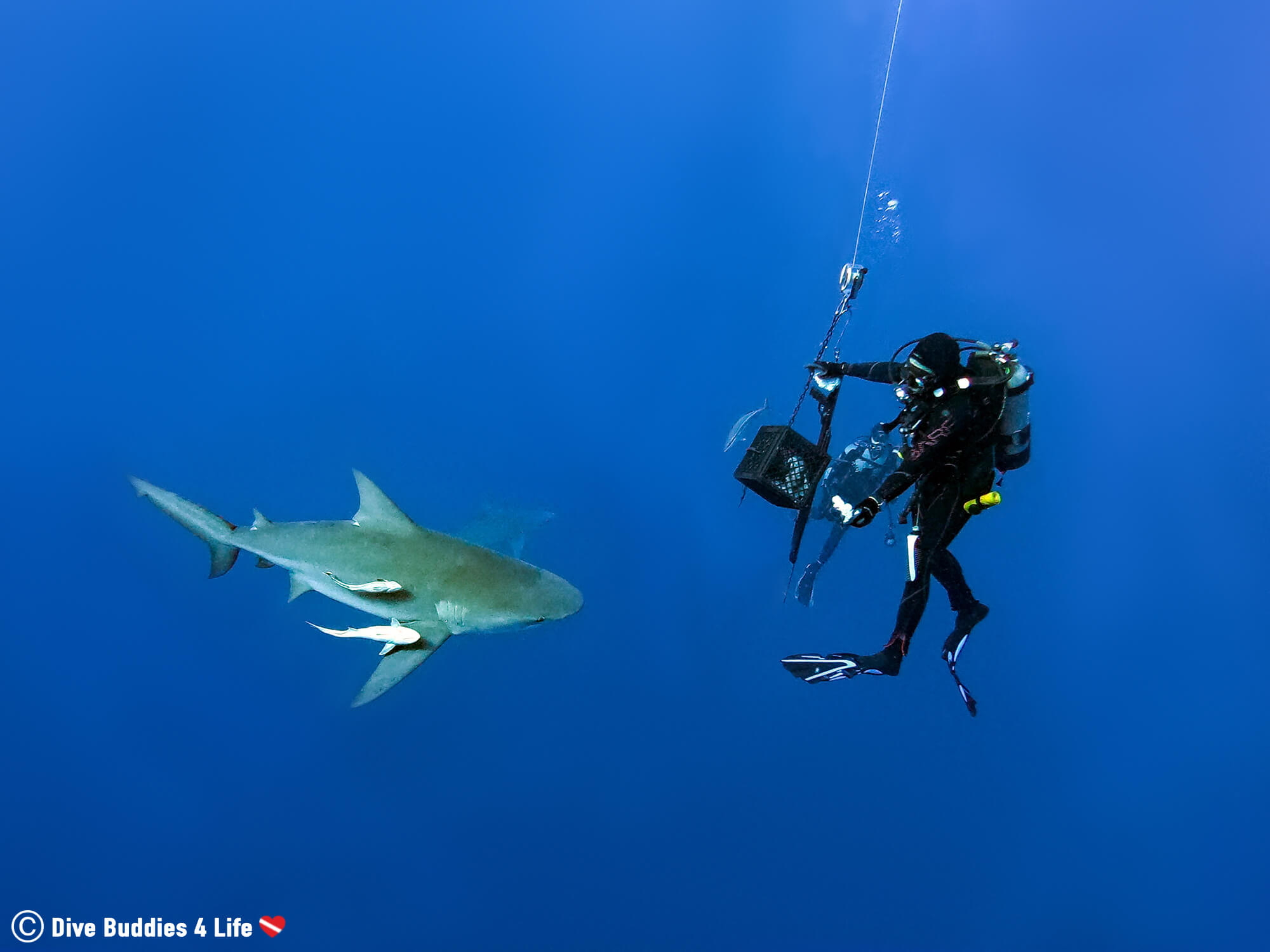 In Jupiter, divers and the shark feeder enter the water with a crate or bucket of “chumsicle,” which is essentially a frozen ball of dead fish parts. As time elapses and the dive progresses, the frozen bait slowly melts releasing blood and fish scent into the water. Sharks, with their keen sense of smell, are attracted by the dead fish odor, and begin to arrive and encircle divers looking for the source of food.

The experienced shark feeder will slowly pick pieces from the baited ice cube and feed the surrounding sharks, bringing them close and giving divers the unique opportunity for a face-to-face encounter with some of the oceans most beautiful predators. 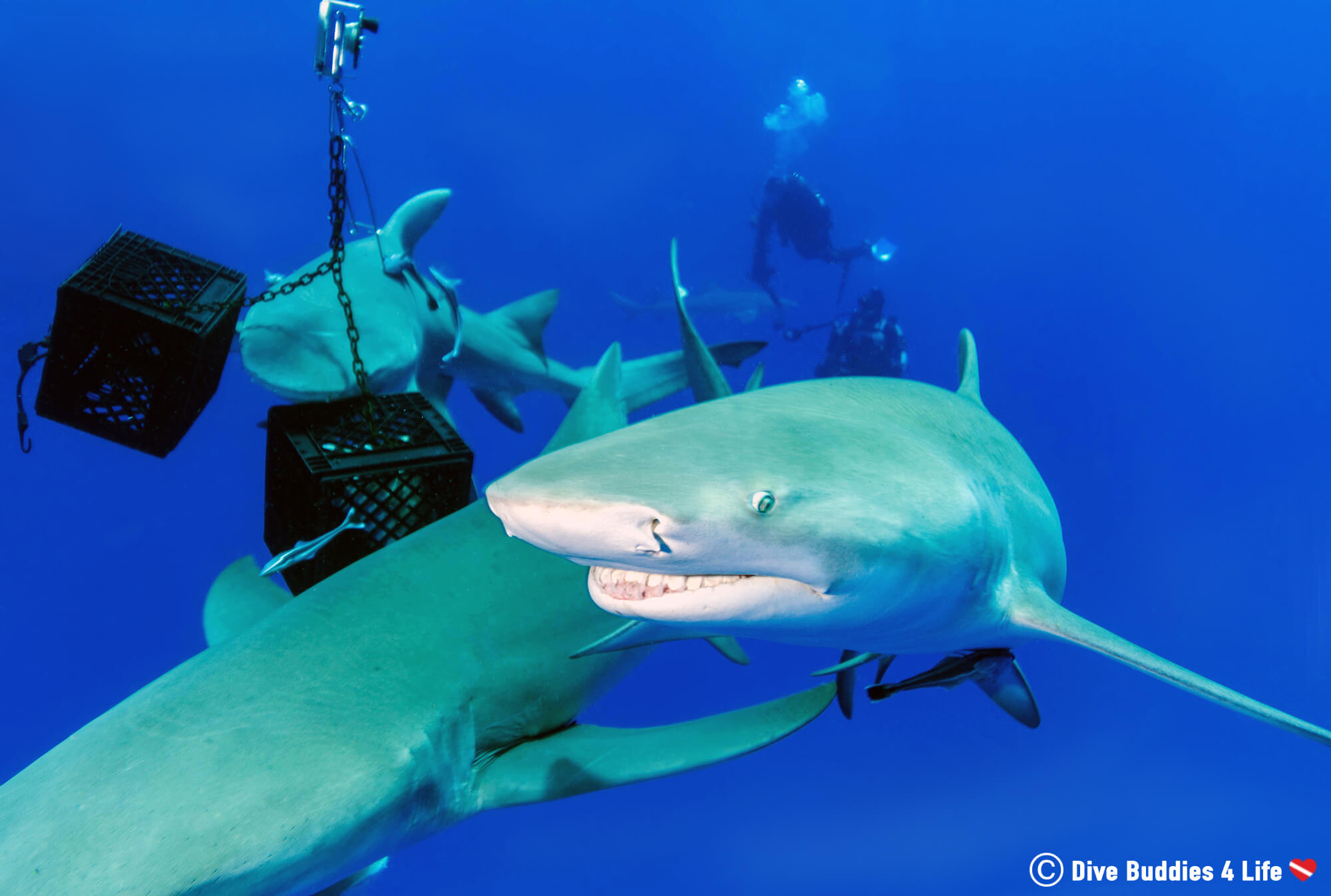 Is Shark Feeding Good or Bad?

Shark feed dives are one of those love-hate kind of dives. If you love sharks you will be lining up to see them, but if you’re firmly against human interactions with nature, you will be pulled the other way.

In a perfect world, we wouldn’t need to feed sharks. There would be healthy populations in all our oceans and divers could easily backroll off the boat and appreciate this majestic predator in a natural way. But sadly that isn’t the case, and many shark species are critically endangered. 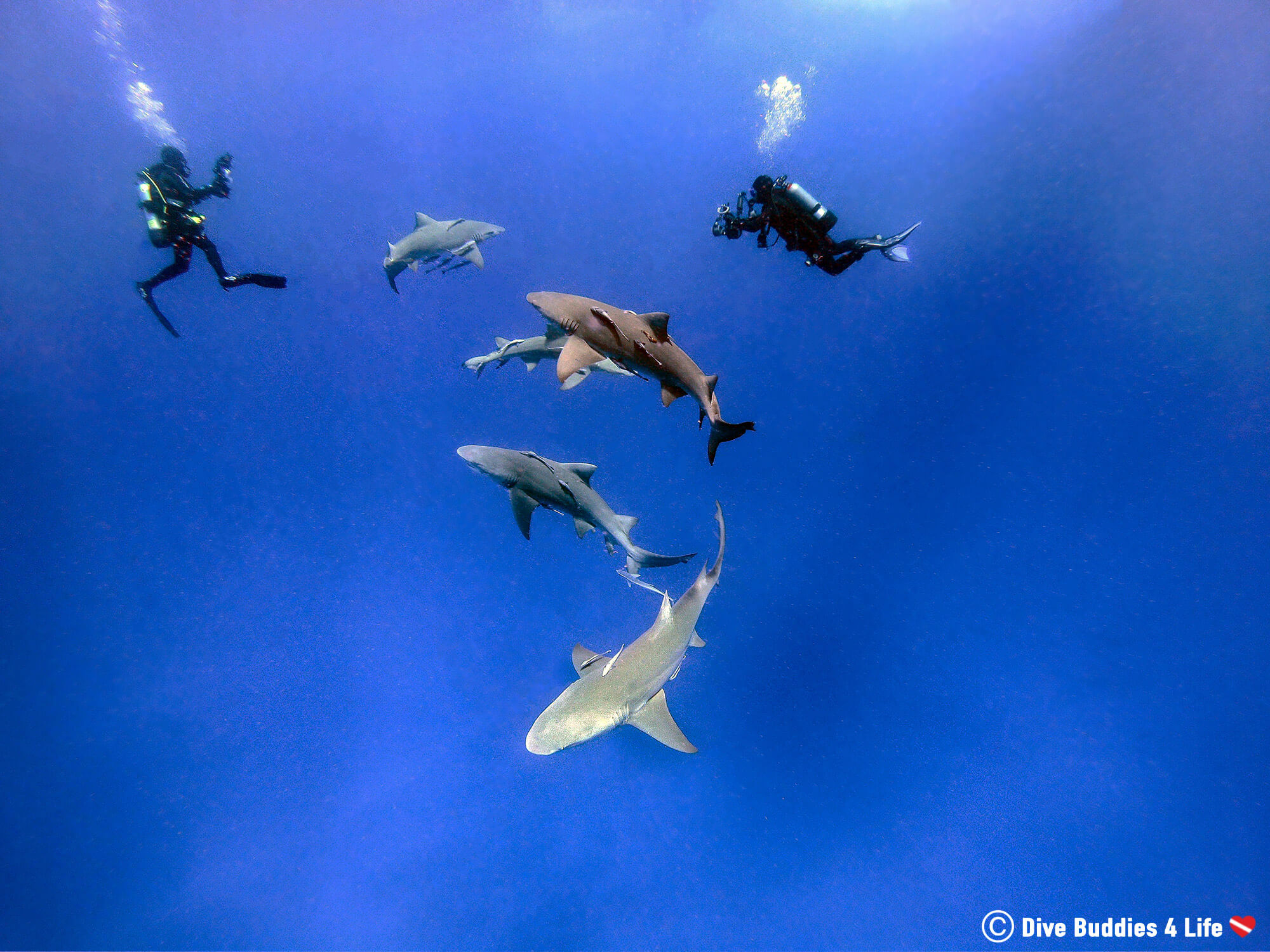 Without going into too much details, shark feed dives have always been a highly controversial subject, with good arguments for both sides.

When sharks learn to associate humans with food it sets a precedence, and they are conditioned to expect food from divers. So what happens to a diver that decides not to dive with food? Feeding can lead sharks to become aggressive and in worst case scenarios attack.

A sharks natural behaviour is also changed. If a shark finds a new permanent source of food, they no longer need to hunt. What does this mean for the health of our fish populations? Their migration patterns can also be disrupted and this could lead to an escalation of unpredictable changes. 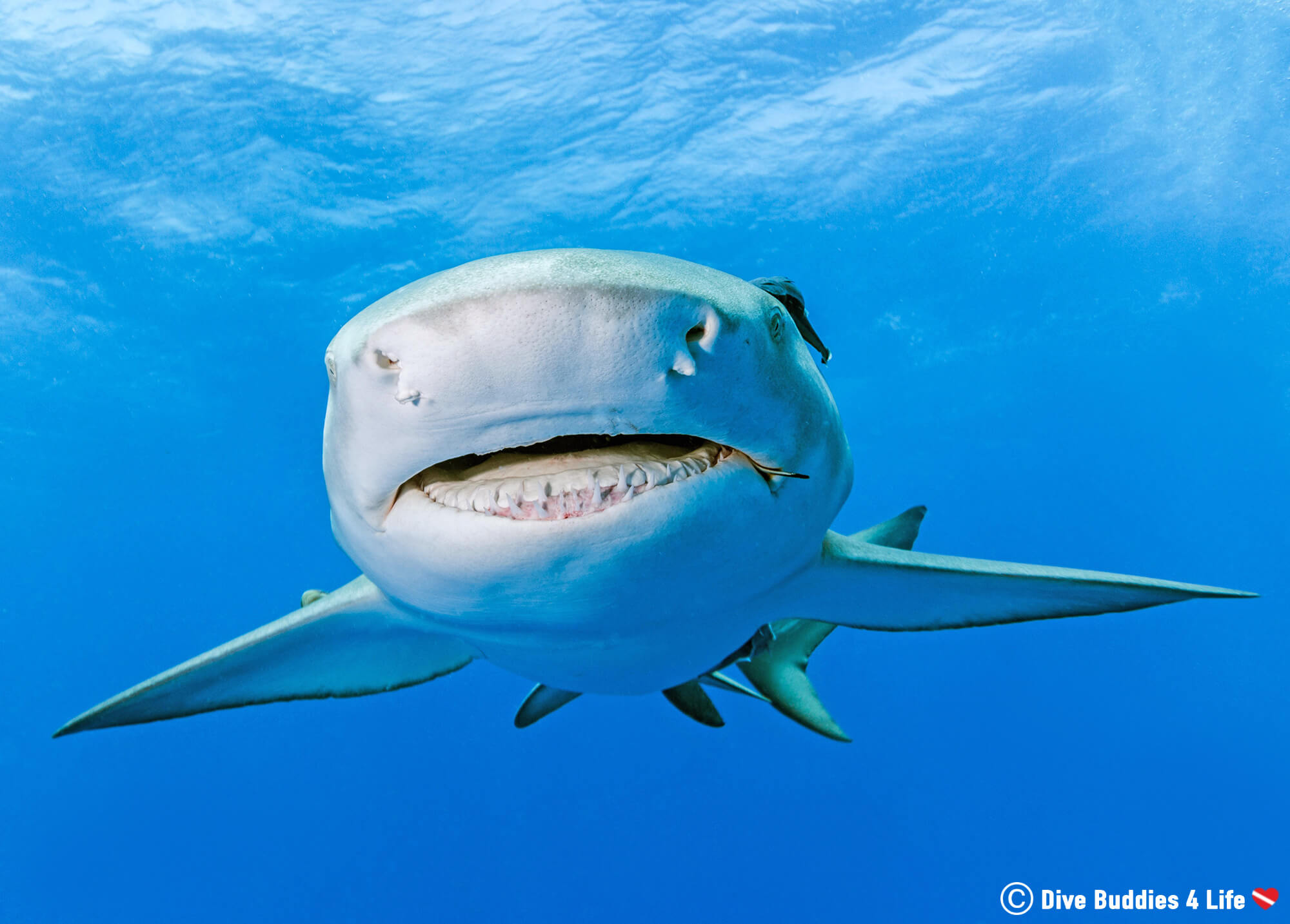 On the other side of of the dice, shark feed dives provide an important opportunity for education and public outreach. Shark feed dives allow returning sharks to become ambassadors for their entire species. It gives dive masters, scientists and conservationists the unique opportunity to study and paint a new picture of an animal fearsome of humans and in dire need of protection.

Shark dives also help the local economy. If a country understands how valuable a live shark can be in terms of recurring tourism revenue, maybe then will more effective protection laws come into place preventing sport and consumption killing. 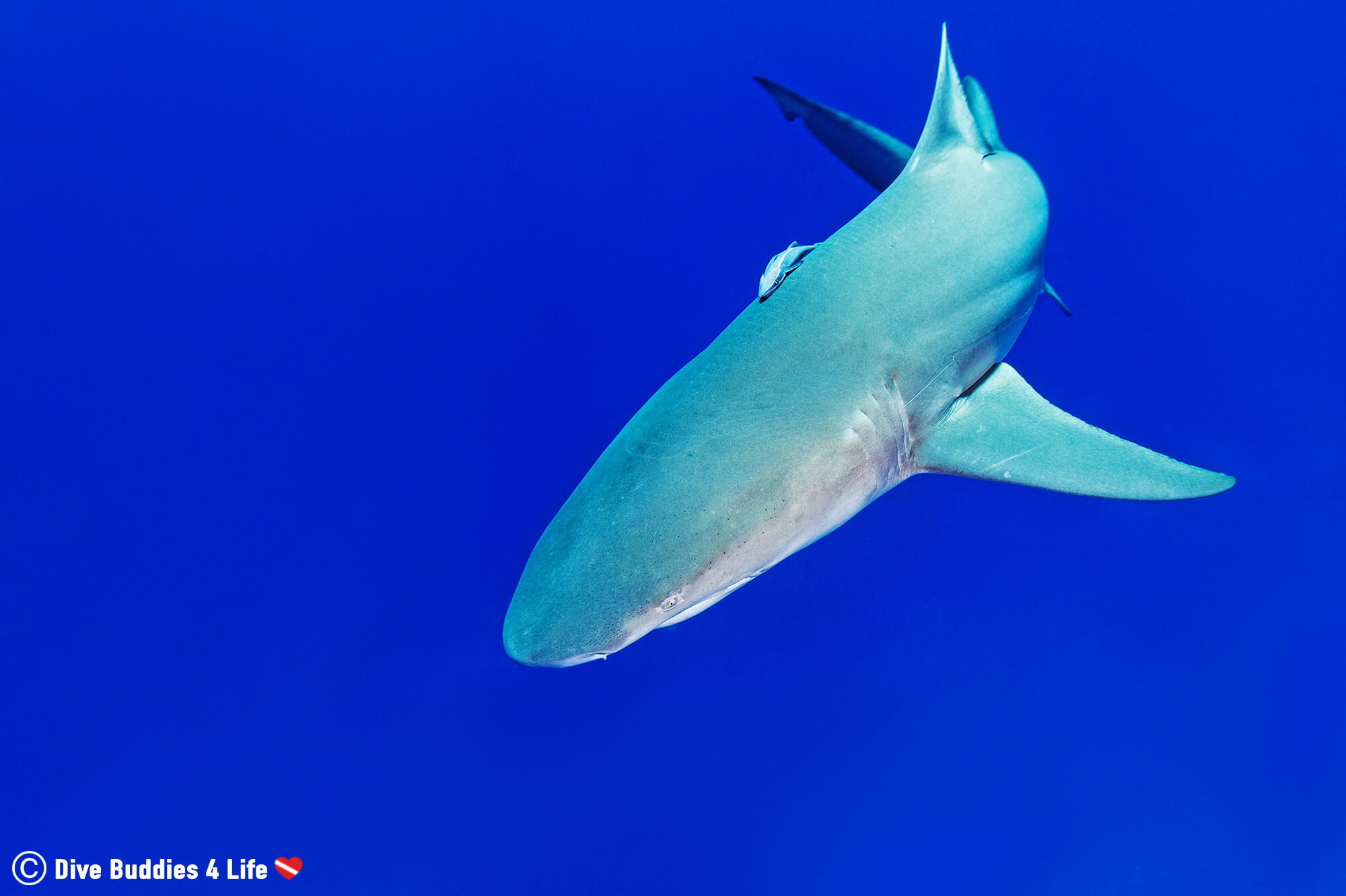 And the Verdict Is…

In spite of the varying opinions there is no black and white answer with regards to shark feeding being good or bad. It all depends on the situation, human behaviour and desired outcome.

The only thing we know for certain is that ANYONE who has the good fortune of seeing a shark in the wild, is one more person on this planet who will become an advocate to save them. And at the end of the day isn’t that the single most important thing?

That was our thought process when we signed up for our first ever shark feed dive in Florida, and in spite of the controversy surrounding shark feeding, we couldn’t have been more thrilled with the result.

From the moment I woke up, to the time I hopped on Emerald Charters shark painted dive boat, I was primed and ready for an adventure unlike anything I’d ever done before. 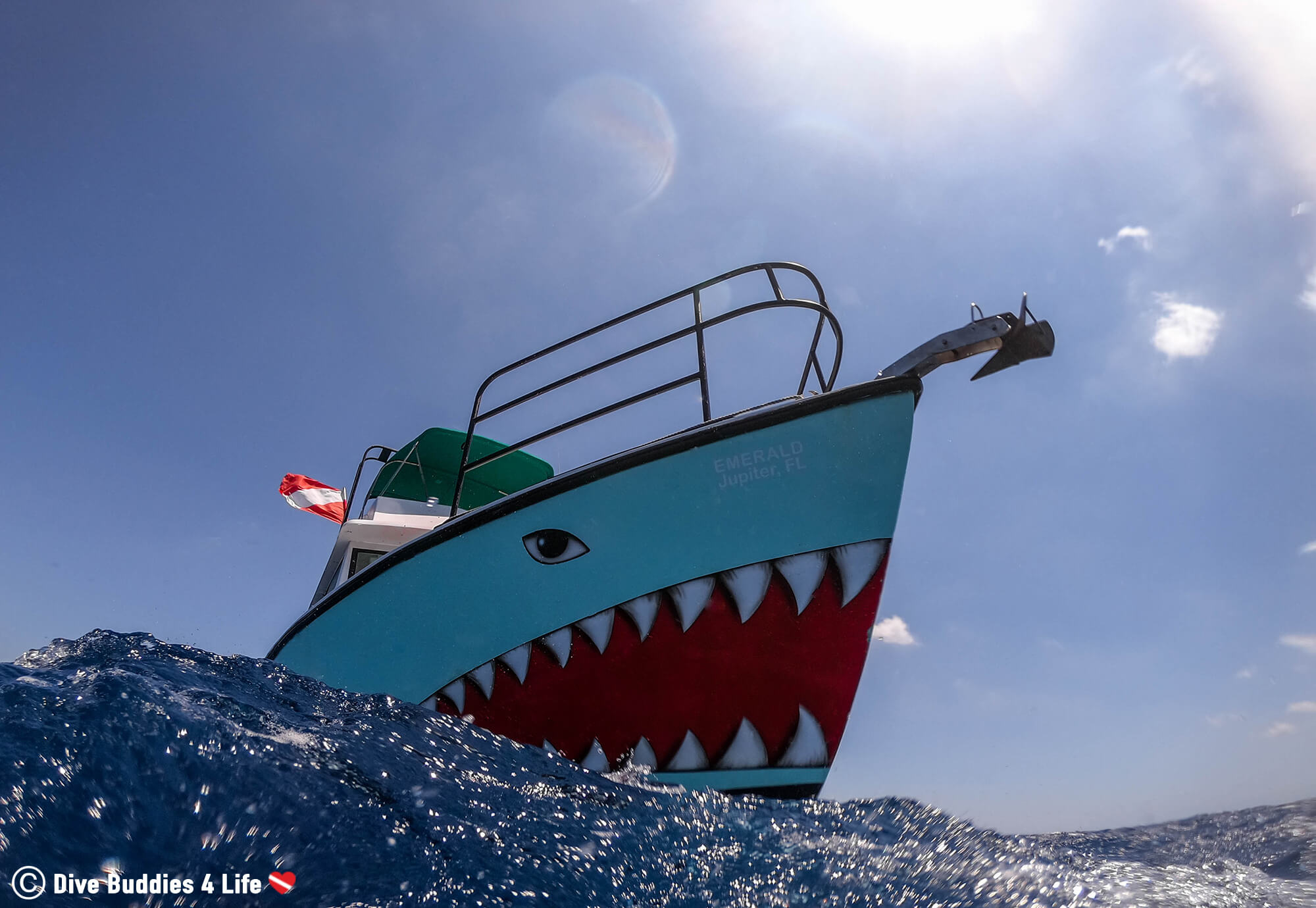 As we headed out to sea from the harbour the dive crew briefed us on the shark dive logistics and added a few thawed fish fillets to our already prepared milk crate container chumsicle. After about an hour in the dive boat we geared up for the dive of our lives.

The captain gave us the 2-minute warning and we shuffled to the rear of the boat. When the time came to dive, dive, dive I released the air from my BCD and jumped off the boat in queue. Being negatively buoyant I was taken away in the current letting my weight belt drag me down.

Beneath the waves, Jupiter was a blue world of ocean wonder. Accompanied by the rest of my fellow divers, we rode the current as a group while descending into the depths.

It didn’t take long for them to show. First one, and then another. Words cannot describe my sensations as these sharks trickled into view, all looking for a bite to eat. Before I could think twice we were surrounded by five of them. My heart pounding excitedly as my brain began to comprehend what was happening. 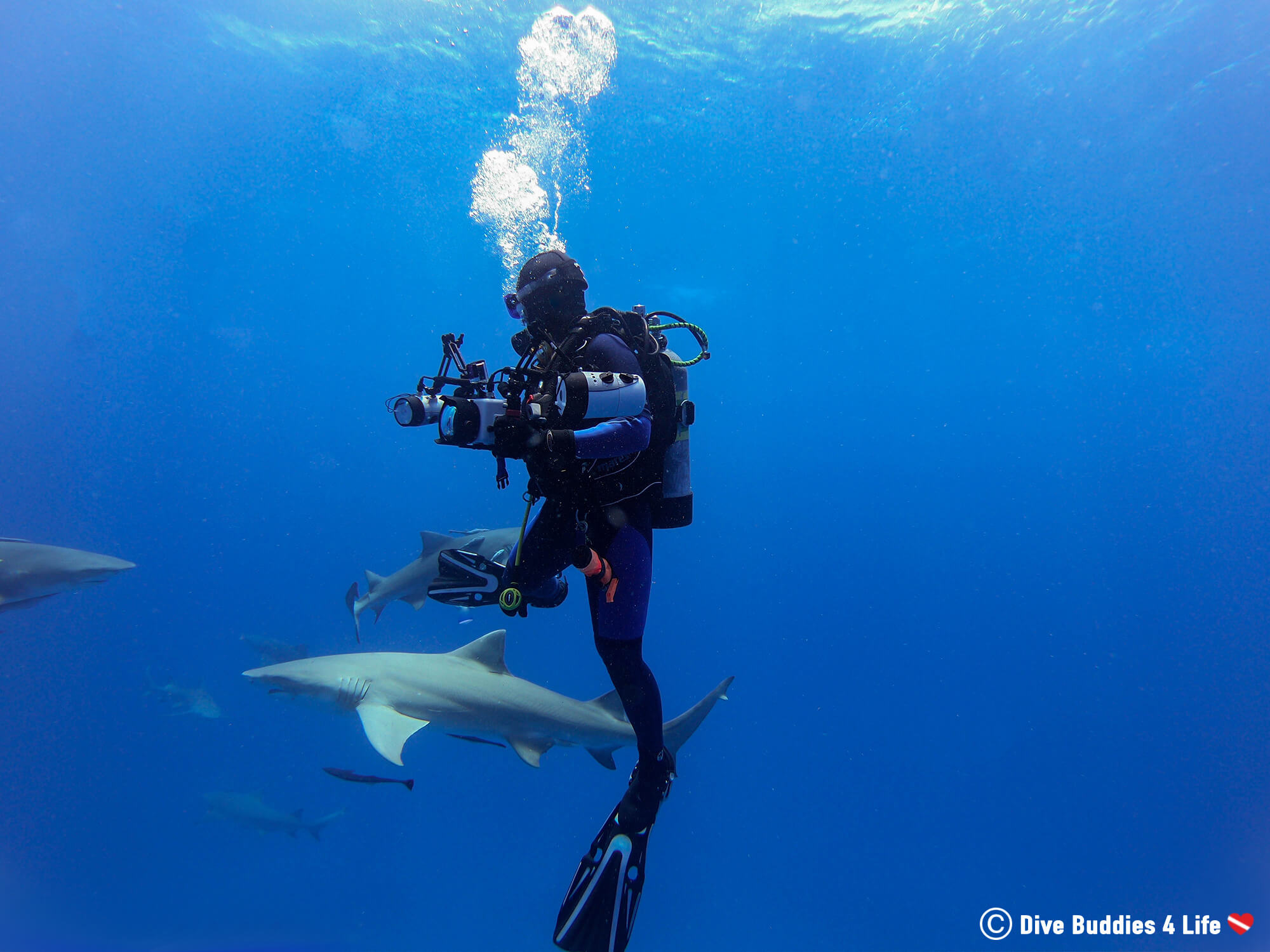 Despite the eeriness of floating in the big blue in the company of several different sharks, I’m was almost in a meditative state as I let them glide past me. It’s as if the strength of the ripping current did not even effect them. The only sound I remember hearing was my robotic breath as I move closer to the feeding crate – the most shark active area. 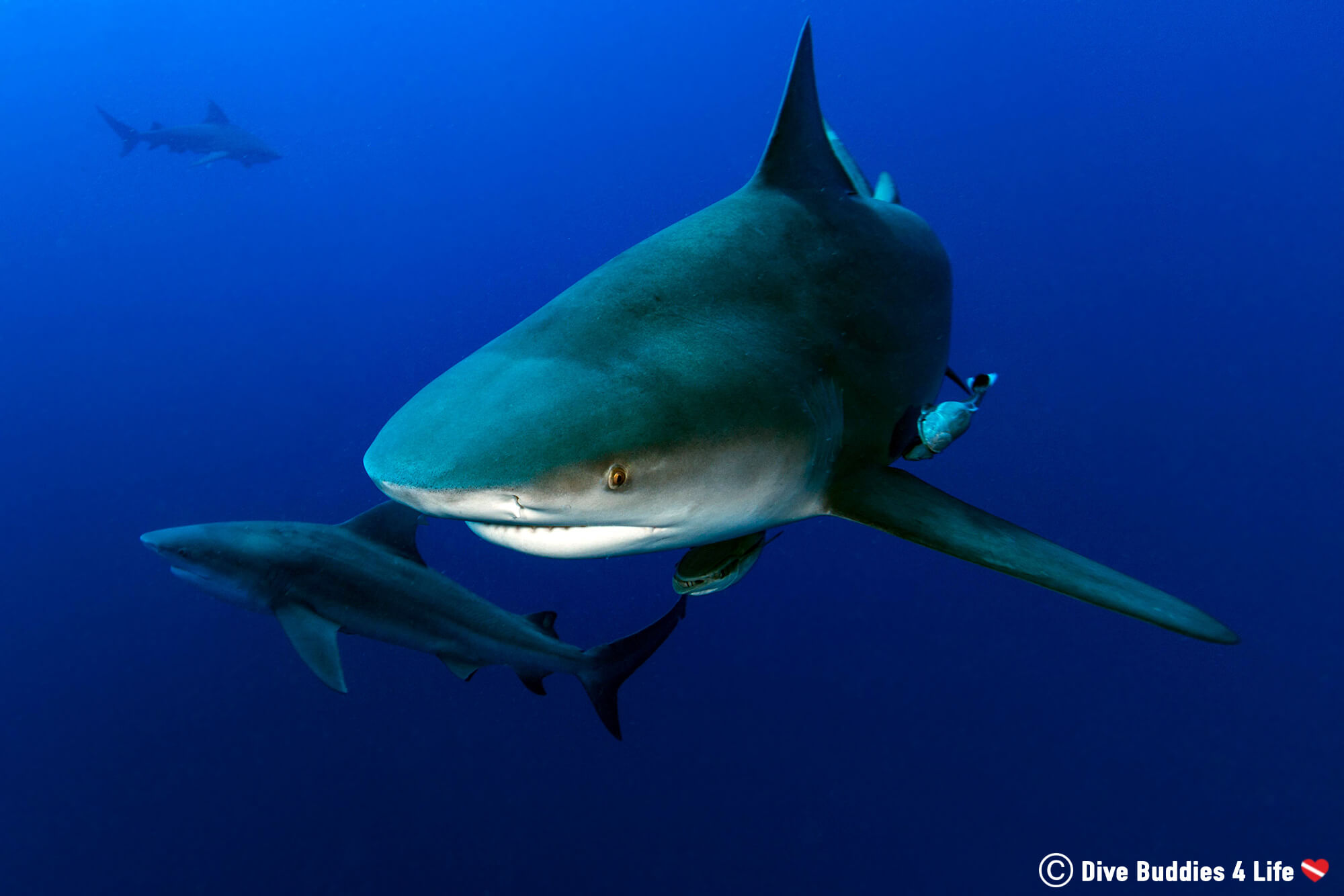 Our dive group enjoyed close to an hour on the first feeding dive. I’m not sure what got our blood pumping more – the fact that we were floating along at a pretty speedy clip, or the fact that we had an aggregation of bull sharks joining us on our safety stop.

The second and third dive started much like the first dive, only instead of spending the entire time drifting in the water column we descended to a shipwreck and did the feeding in that vicinity.

Lining the edge of the shipwreck, we watched as our feeding guide stationed himself on the sand below and would bring the sharks up towards us in a controlled manner with the food. Nurse sharks, reef sharks, lemon sharks, black tips all made an appearance, looping back again and again for more food. The silky grey creatures loom large and swam within touching distance of my hands. 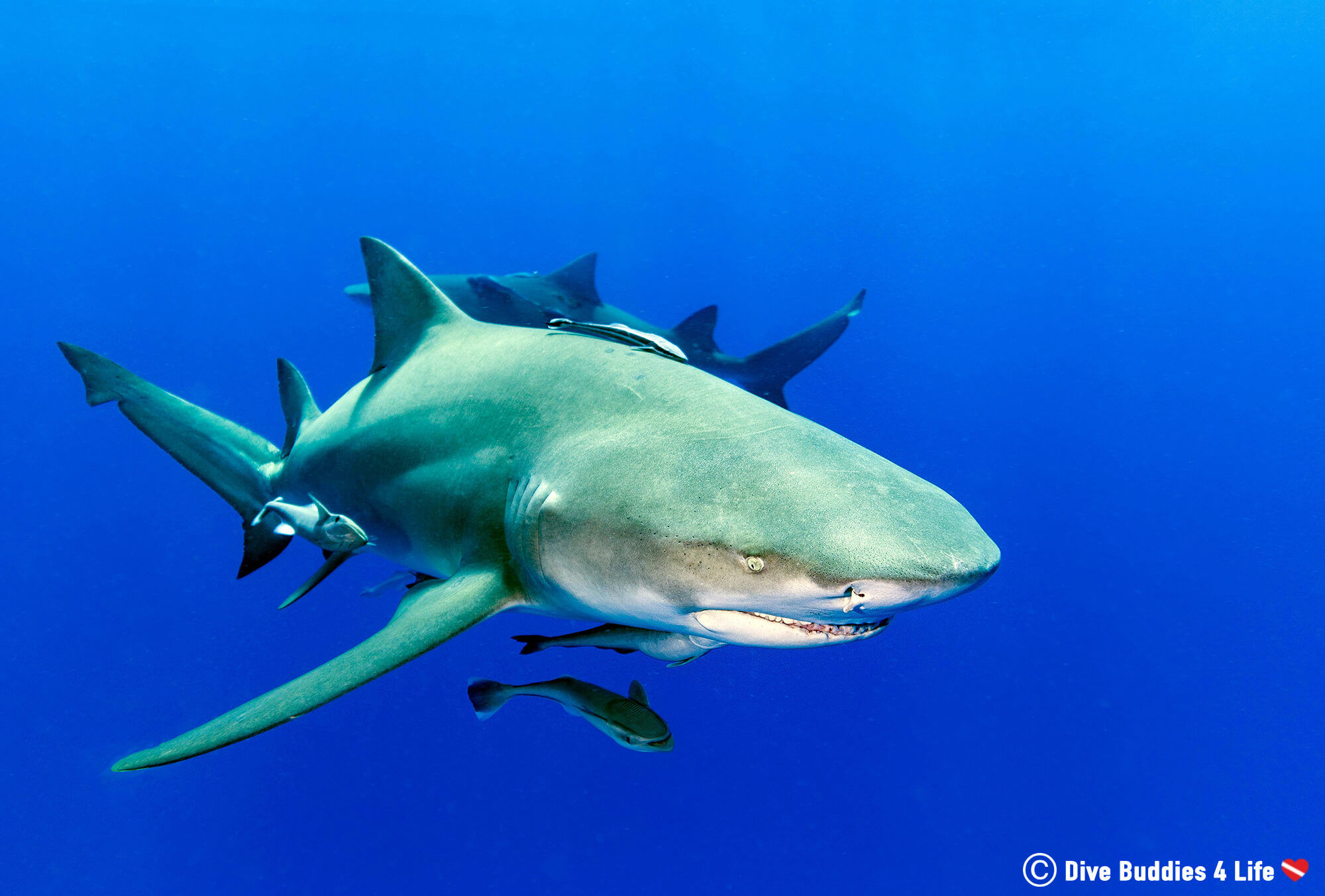 And then Patrick the 11-foot tiger shark arrived. 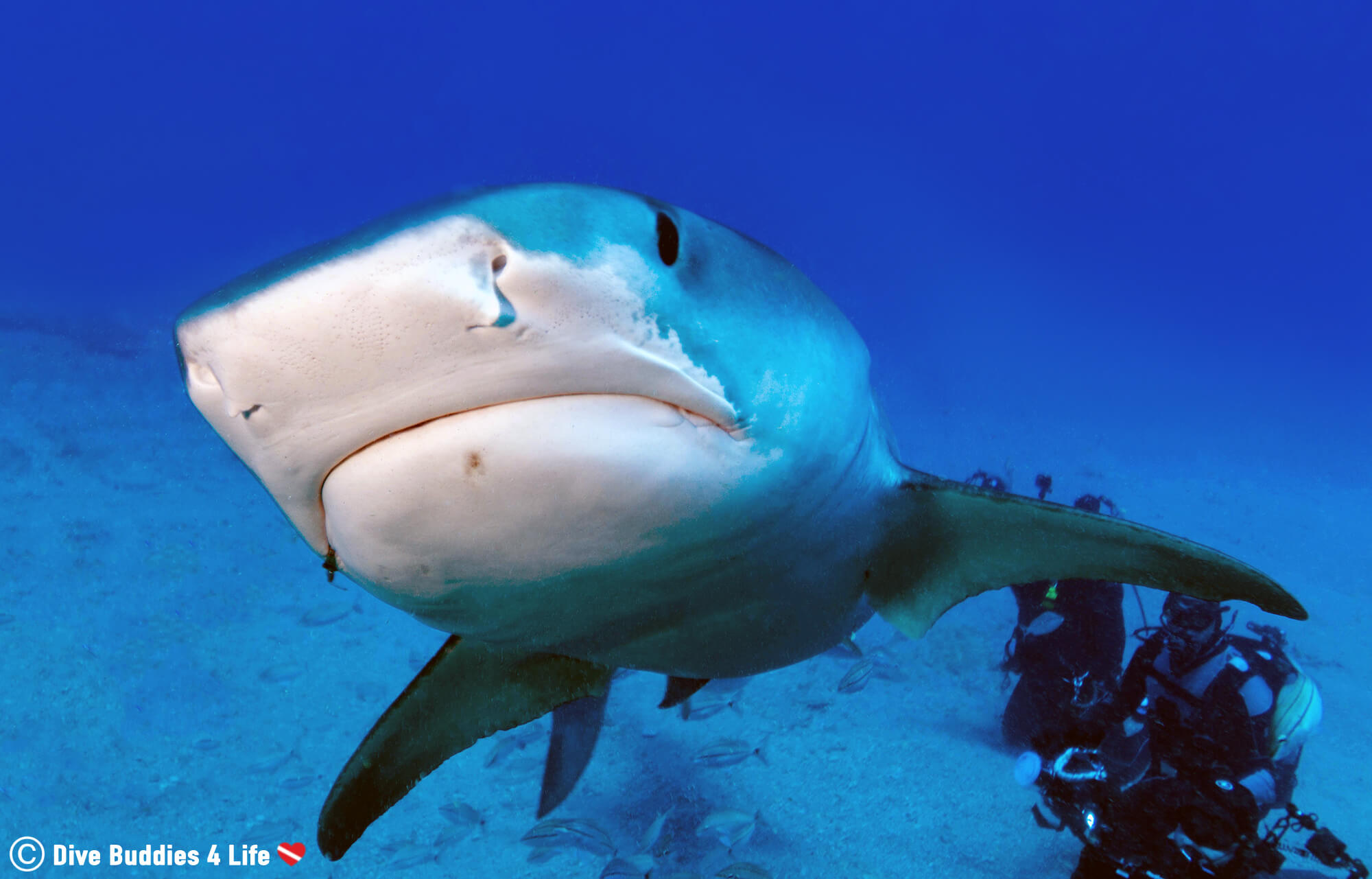 Patrick joined our group on both shallow dives, meeting like clockwork at the wreck and leaving us just before we drifted off towards the surface. The shark feeder was hoping to keep Patrick with us once we left the protection of the shipwreck for our safety stop, to no avail. This was probably for the best – I don’t fancy having his striped tail lurking around me in open water.

When all was said and done, we returned to the docks of Jupiter. It goes without saying that after a 3-dive shark show like that, Joey and I were feeling more than euphoric.

Our amazing shark feeder was even sweet enough to give me a lemon shark tooth he found while we were underwater. I was so proud I decided to take a highly attractive picture of myself with it. Sometimes I’m so pretty it hurts.

Florida is a place where sunny dreams and incredible dives are a reality.

The drift, the current and of course the massive amounts of sharks in one area… For two divers from Canada, diving in Jupiter was without question a complete sensory overload! 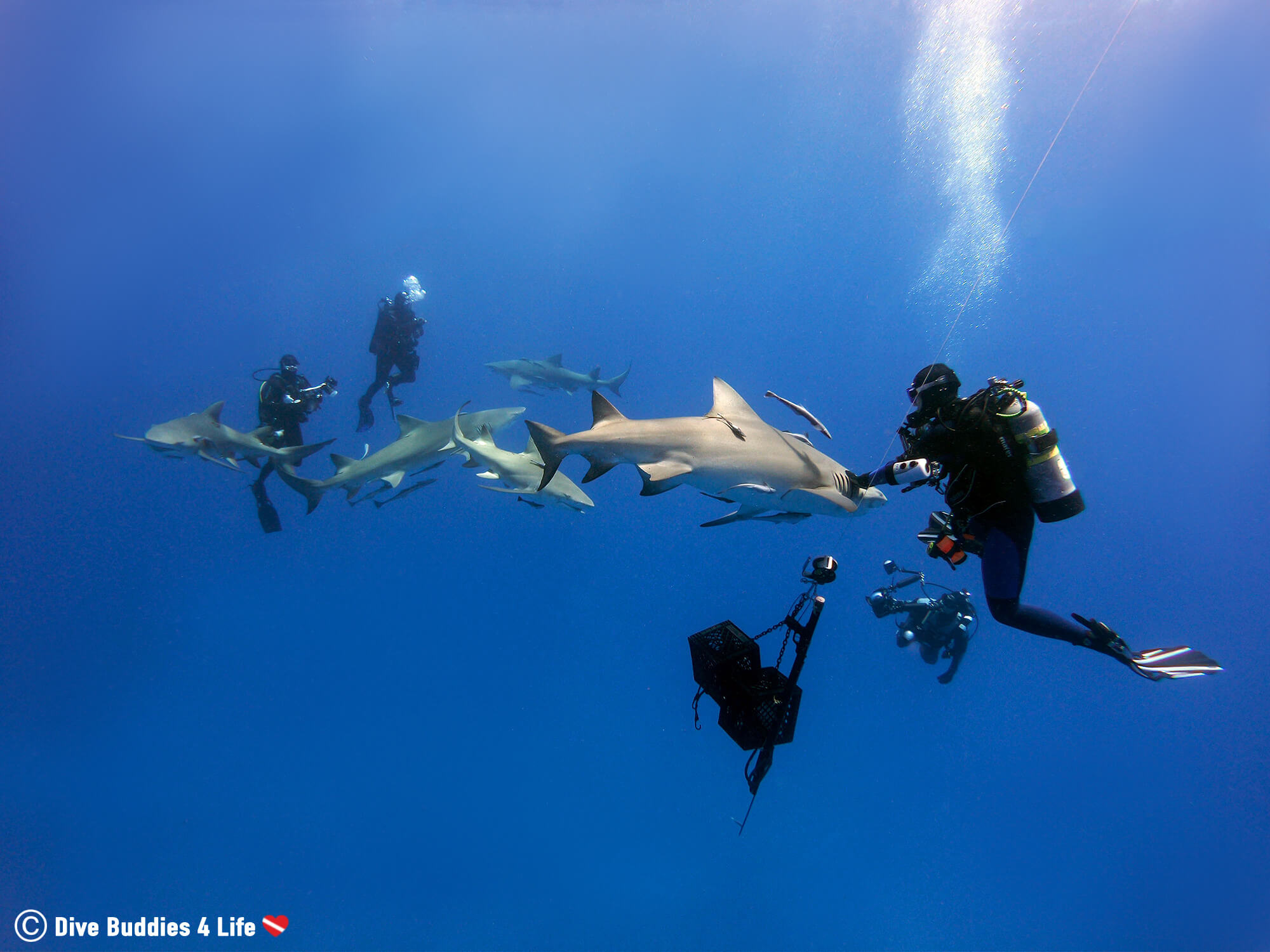 Shark diving is an out-of-this-world experience, that is certainly not for the fainthearted. In spite of its extreme controversy, I would highly recommend that any diver with even the slightest desire to get up close and personal with sharks, experience this style of dive before making an ethical decision.

To place yourself face to face with these apex predators is to truly watch nature take a leap of faith.

Have you ever tried a shark feed dive? What are your sentiments with regards to them? Are you pro or strongly against this style of diving? Why?

Additionally, any interaction or touching of animals on this dive was done in a safe and unharmful manner. As instructed by the crew at Emerald charters, when the sharks would come too close to divers we would simply back away to give them their space or gently redirect them with the push of a hand via their rostrum. 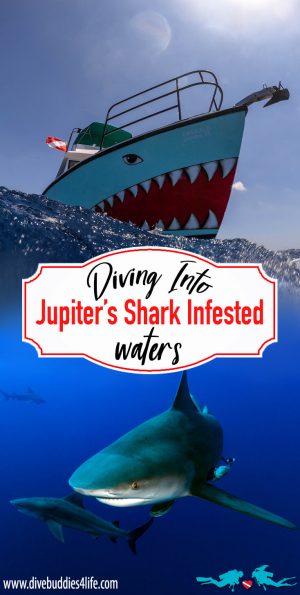