USA: Diving into the Den of the Devil

From the pictures, Devil’s Den Prehistoric Spring is a place that can be described in many ways; it’s dark, it’s creepy, it’s ancient.

But when you head down into the velvet underground for the first time and catch a glimpse of the dive platform surrounded by aquamarine water, it becomes truly magical. 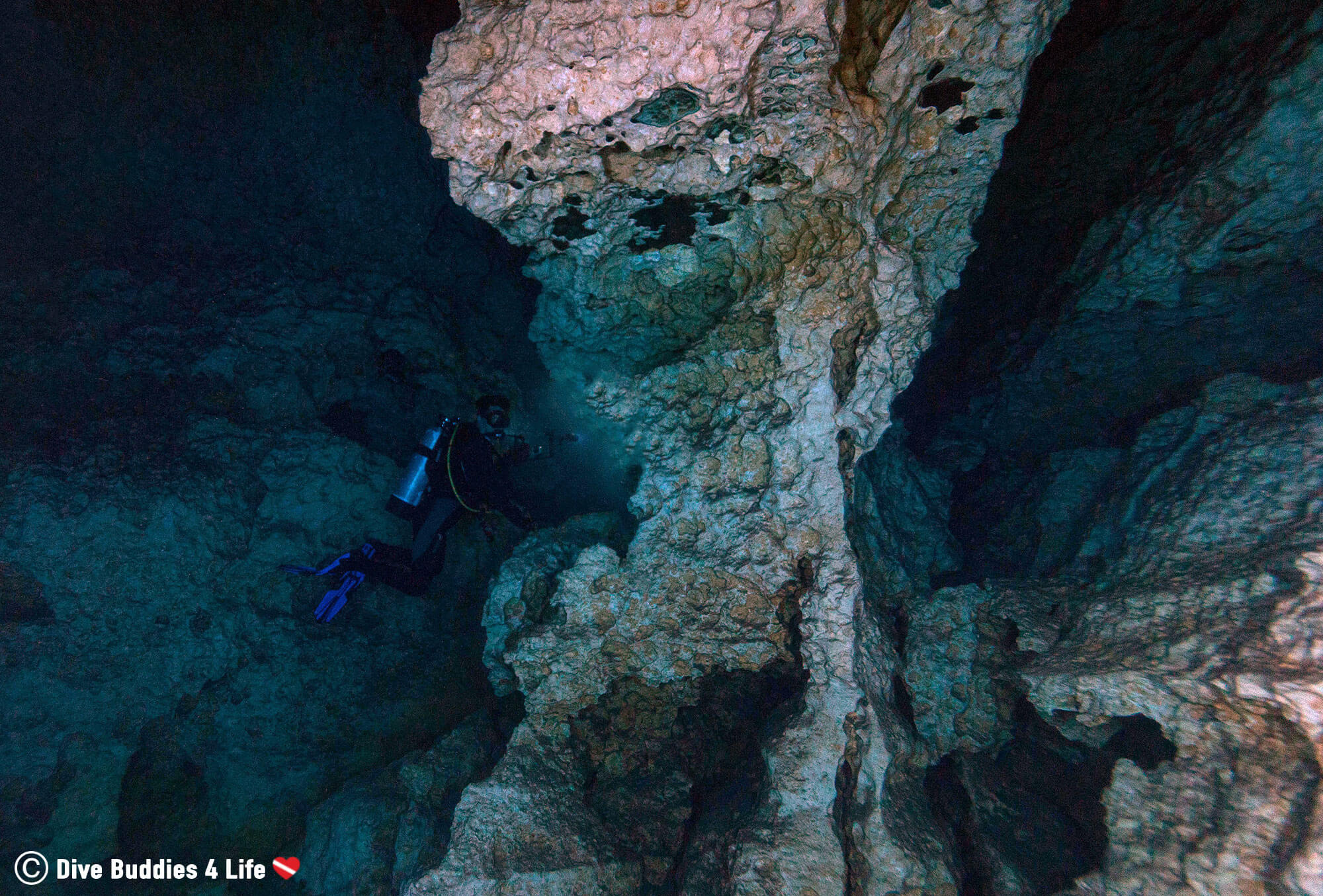 A Lesson in Devil’s Den Geology

The Devil’s Den is located in Williston, Florida and is a geological formation called a karst. For those not geologically inclined, like me, a karst is a term that describes a phenomenon where the earth has caved in over an underground water reservoir creating what is basically a cavern.

Over the years of the spring’s existence, many explorers have mapped, extracted fossils and even looked at geological evidence on the Devil’s Den. Human remains, animal remains, and even historical artifacts have been recovered from inside this watery pit. All have concluded that this particular sinkhole has a very prehistoric existence.

One of the most notable findings is a full fossil skeleton of Tremarctos Floridanus, an extinct species “Florida cave bear” found in the Devil’s Den proximity. The skeleton is now displayed in the University of Florida’s Natural Museum of History.

Thanks to fossil findings such as the Florida cave bear, as well as limestone deposits dating back to the Pleistocene Epoch, the Devil’s Den sinkhole is dated to be between 10,000 to 75,000 years old. 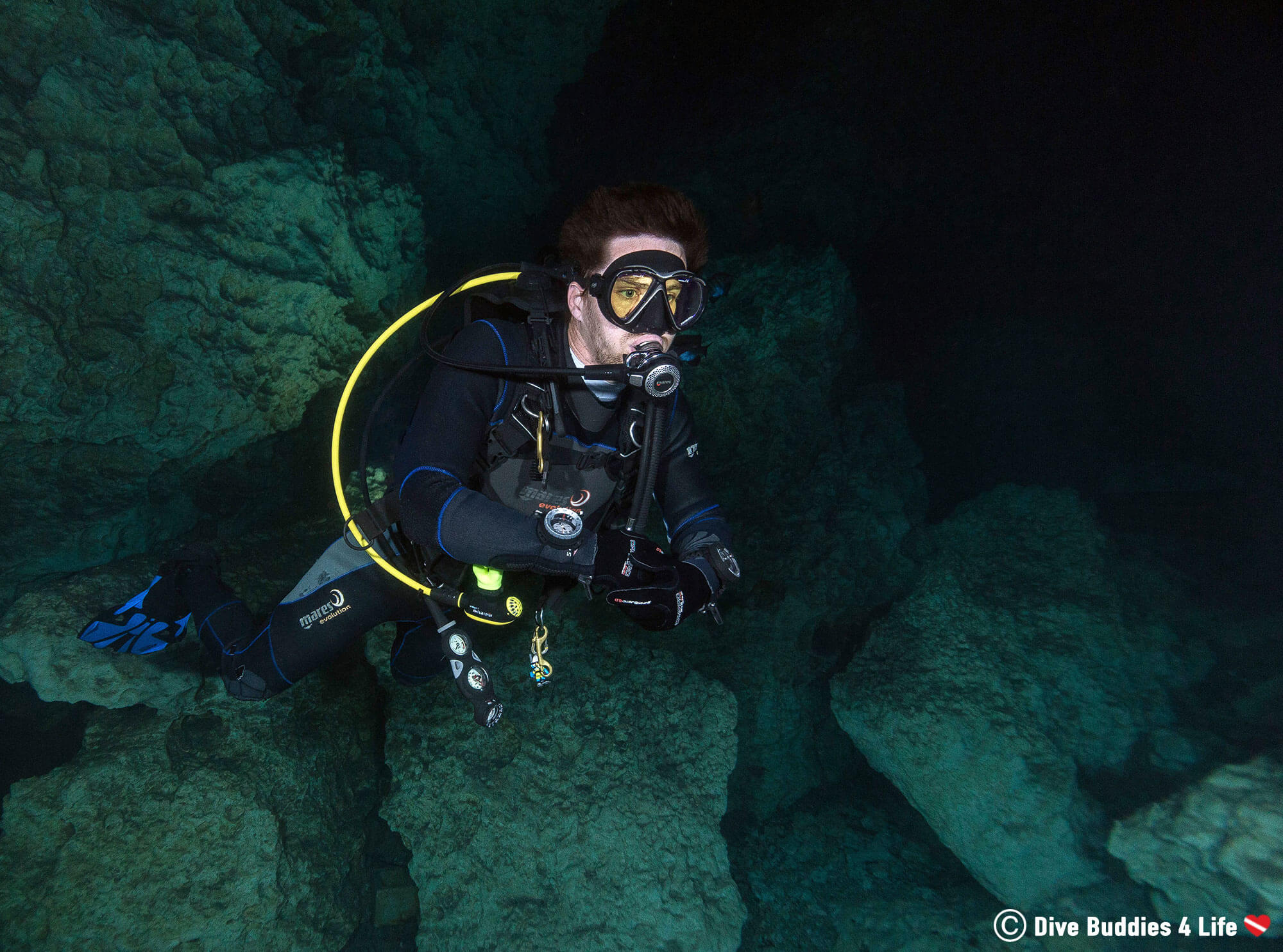 There is not much information on how and when the Devil’s Den was first discovered. What is known, is that before the cave became a dive site and famous visitors attraction, it was owned by a farmer who used to deal with locals sneaking onto his property to use the cave as a swimming hole.

Interesting Fact: Local folklore says that the pit was given the name Devil’s Den because of the steam rising from the spring in the cold winter mornings, looking like smoke was escaping from the depths of the netherworld.

Devil’s Den as we know it today was repurchased in 1993 by the current owners, who improved and expanded on the dive facilities. This natural wonder is now a world-class tourist attraction which consists of a swimming pool, pavilions, camping, cabins, and a fully stocked snorkeling and scuba diving facility.

The Dive Site Logistics and Layout

The Devil’s Den is first and foremost an underground cavern.

What does this mean for diving? While the Devil’s Den is still considered an overhead environment, the cavern is open enough that divers almost always have direct sunlight and an air opening above their head. Because of this, the Devil’s Den is not considered a cave dive and therefore scuba divers are only required to have their basic Open Water certification.

On the surface, the Devil’s Den cavern measures 37 meters (120 feet) in diameter. Under the water, the grotto has the profile of an inverted mushroom. The depth of this underground pool of water varies based on rainfall, but on average, the cave drops down to a maximum depth of 16 meters (54 feet).

Regarding water temperature, the Devil’s Den is filled with 22°C spring water, giving it a crystal clear appearance and relatively constant temperature all year round. 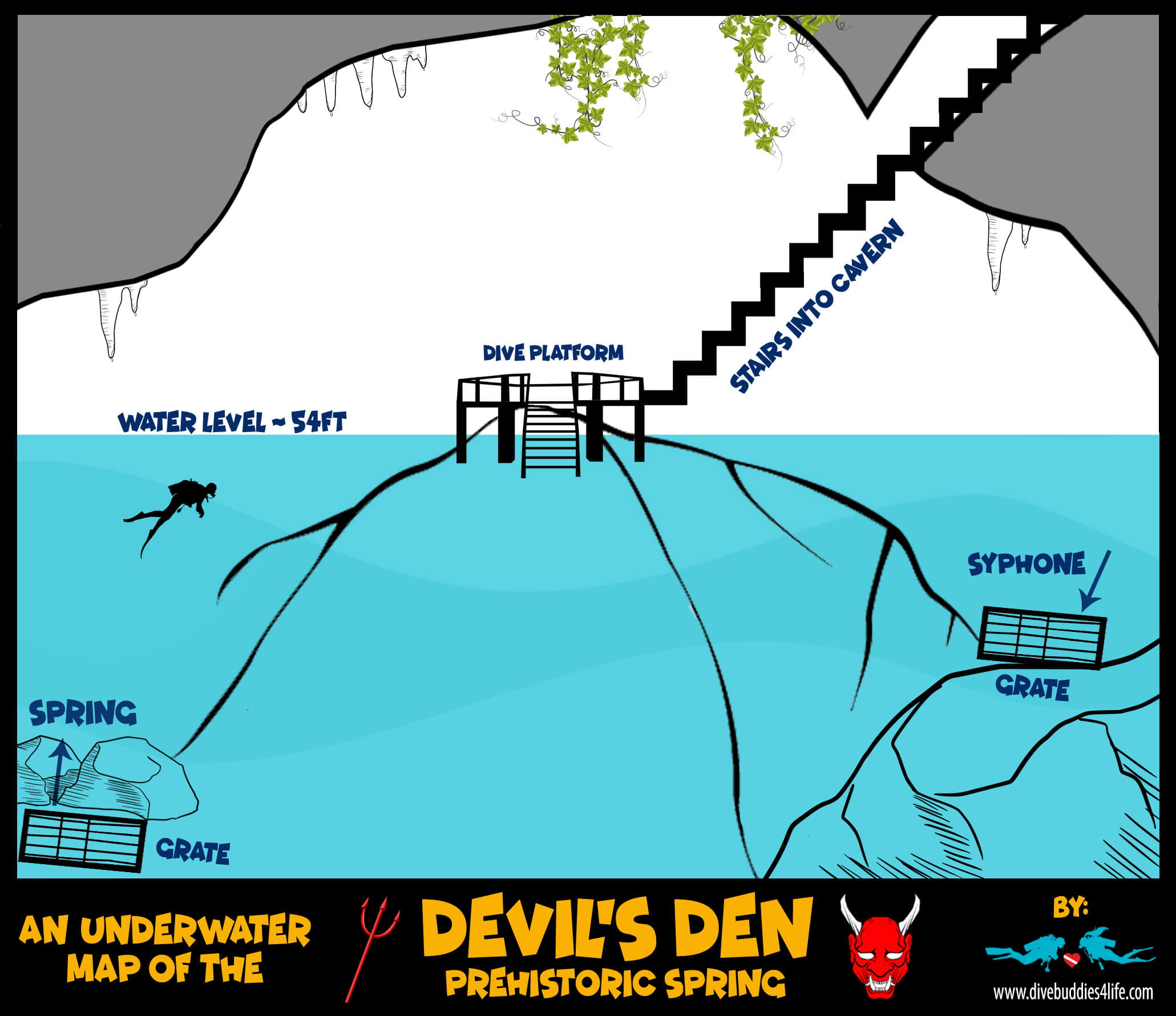 Dive Buddies Dive into the Den of the Devil

Joey and I arrived early into the parking lot of the Devil’s Den. And when I say early, I’m talking fifteen-minutes-before-opening-time kind of early. I like to be prompt. Our goal for the day was simple – to dive and photograph one of Florida’s most well-known sinkholes with as little crowds as possible.

As soon as the Devil’s Den park opened, we were the first ones in. We quickly took care of all the administrative tasks, received our dive briefing and began putting together our gear. 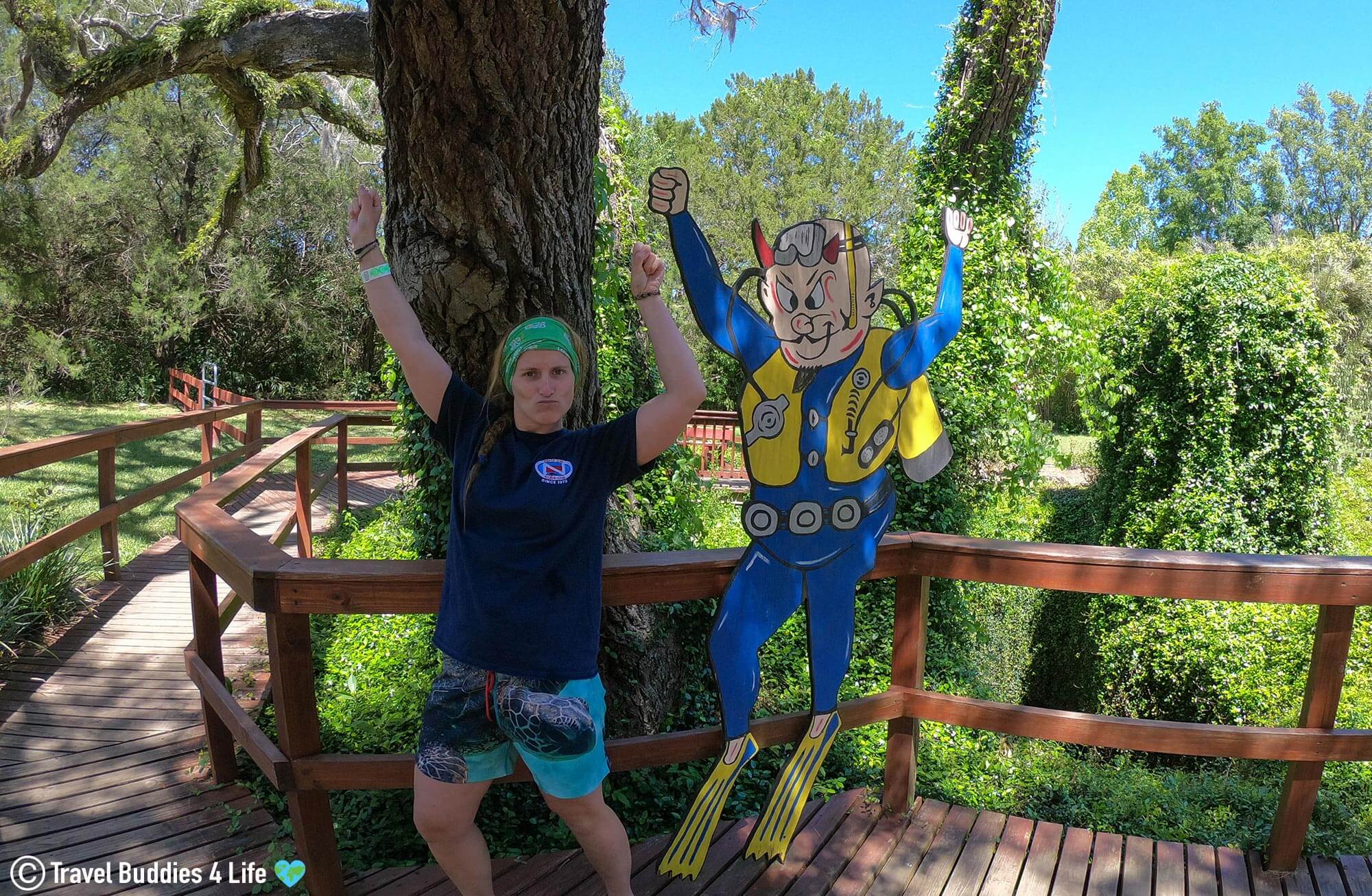 In less than 15 minutes we were ready and made trails to the sinkhole entrance. As we entered the prehistoric grotto through the small opening, the sunlight disappeared. Several small floodlights greeted our eyes and illuminated a downward descending staircase.

No matter how careful I stepped, the metal stairs clanged and resonated off the walls of the cave as I descended to the bottom of the Den. At the surface, the water was so clear we could see some freshwater fish dancing in the tube of sunlight funneling in from the cave ceiling. When I reached the foot of the stairs, I waded out onto the waist-deep platform and began putting on my mask and fins.

When Joey was ready for submersion, we bit down on our regulators, listened for the familiar Darth Vader sound that comes when a scuba diver breaths and pushed off into the watery pit of the grotto.

At first, I had an odd moment of vertigo – it must have been a combination of the lack of light and insanely clear spring water. It made it hard to figure out which way was up – or out. The blue and black coloration of the water all melded together like a pallet of paint. But apparently, I wasn’t too worried because I took the opportunity to grab a couple of pictures. 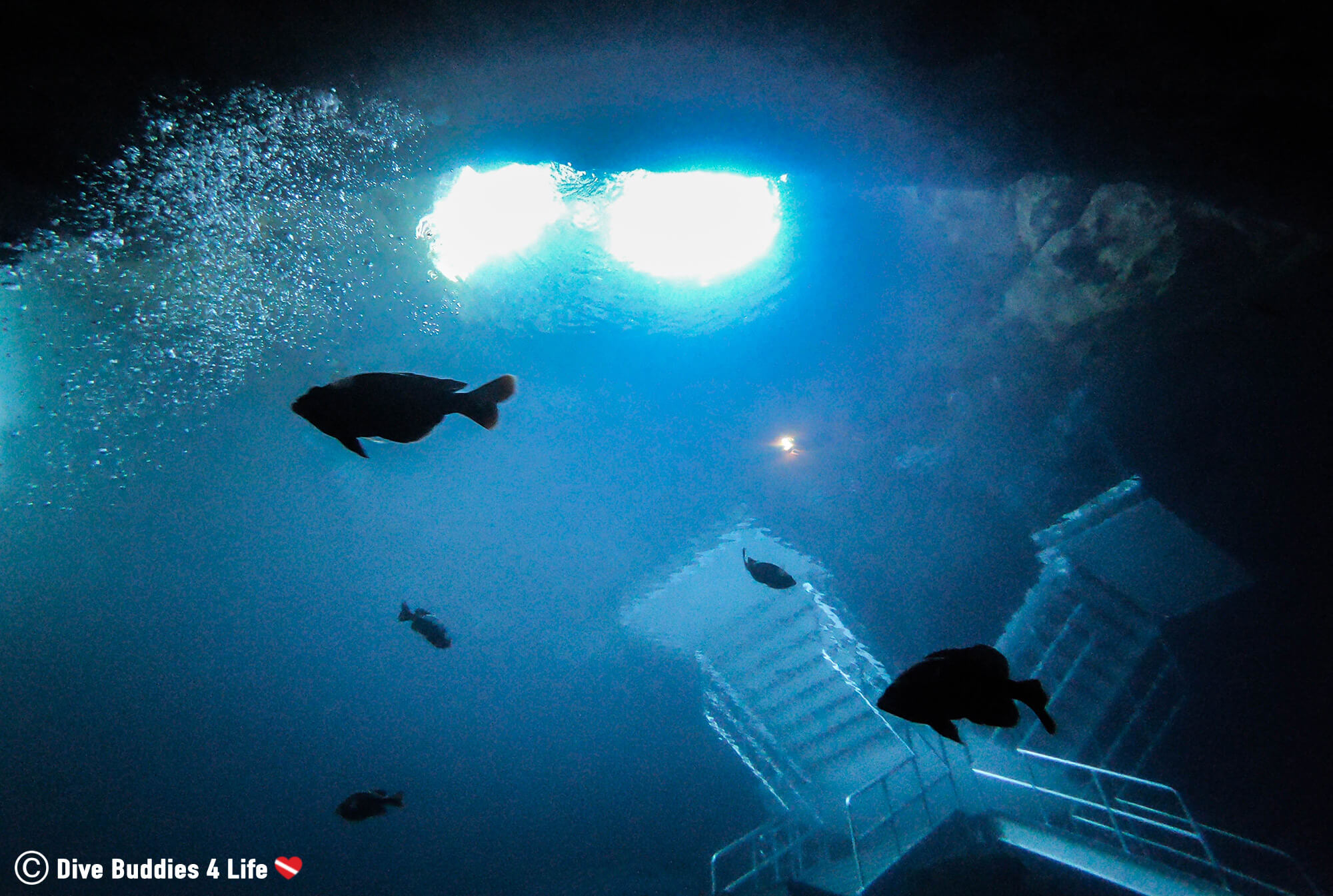 It was a freeing sensation to be floating alone together in this cave.

I could hear nothing except the sound of my own breath and heart pumping in my ears. It’s like being in another state of consciousness. It’s incredible how much you notice when your diving in a cavern secluded from all the distraction of open water.

Our bubbles rose in clusters to the surface each one containing a pearl of used air which burst as they hit the surface. As they rose, the bubbles sparkled like vibrant diamonds when the ambient light hit them just right. It gave the allure of mystery and wonder in such an expansive underground waterway. 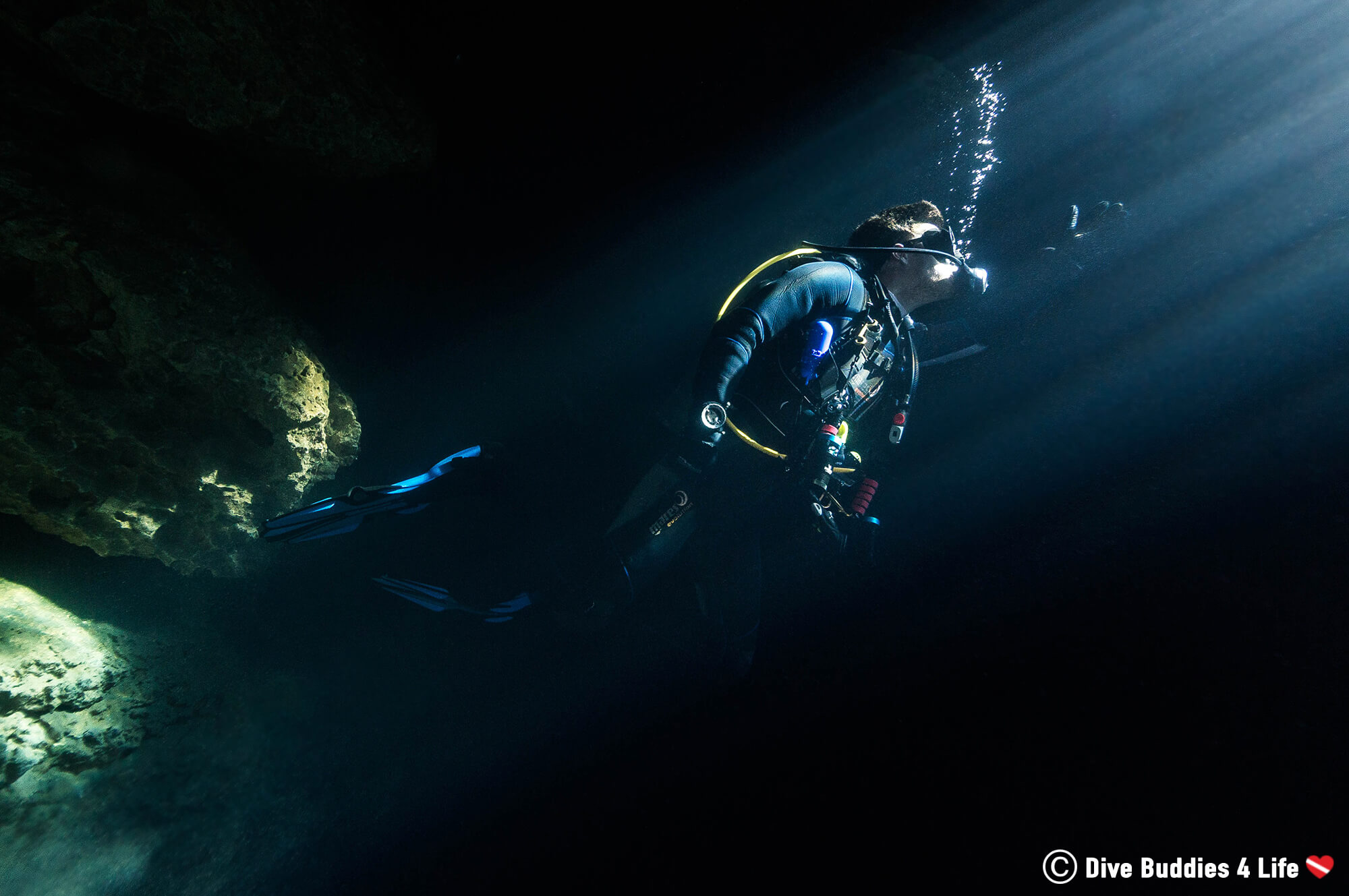 After my initial bubble breathing trance wore off we began to explore the oh-so-famous Devil’s Den spring.

As we circled the stem of the inverted mushroom, the cave’s small native fish came out to greet us. There were guppies, crappies and catfish. Despite our good intentions, some of the catfish were a little too fearful to get close, even though they were pretty big in size. I was a little disappointed that they didn’t get close enough for me to snap a picture. 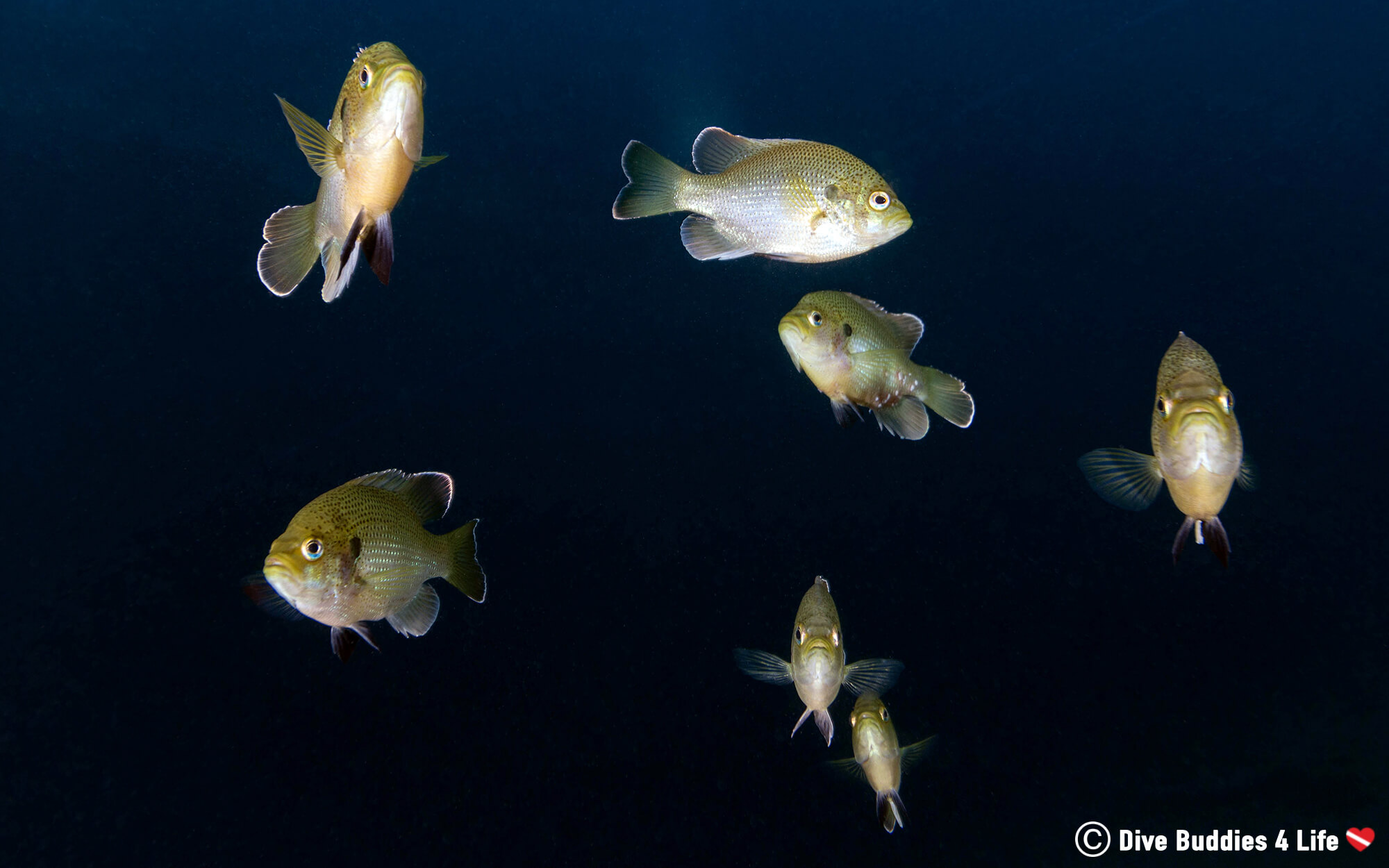 One thing I found surprising was how dark it was in the Devil’s Den. In spite of a good size opening in the ceiling and having sunlight beaming through the hole, it almost felt like we were diving at night. I’m glad we had our lights with us.

Given the shallow depth at which we were scuba diving, when our watches read 750 PSI, we decided to call it a day and headed for the snorkelers at the surface. At that point, I think we had been in the Devil’s Den for well over an hour, and I was starting to get a little chilly in my thin wetsuit. Getting out of the dark cave and warming up in the sun was more than okay for me! 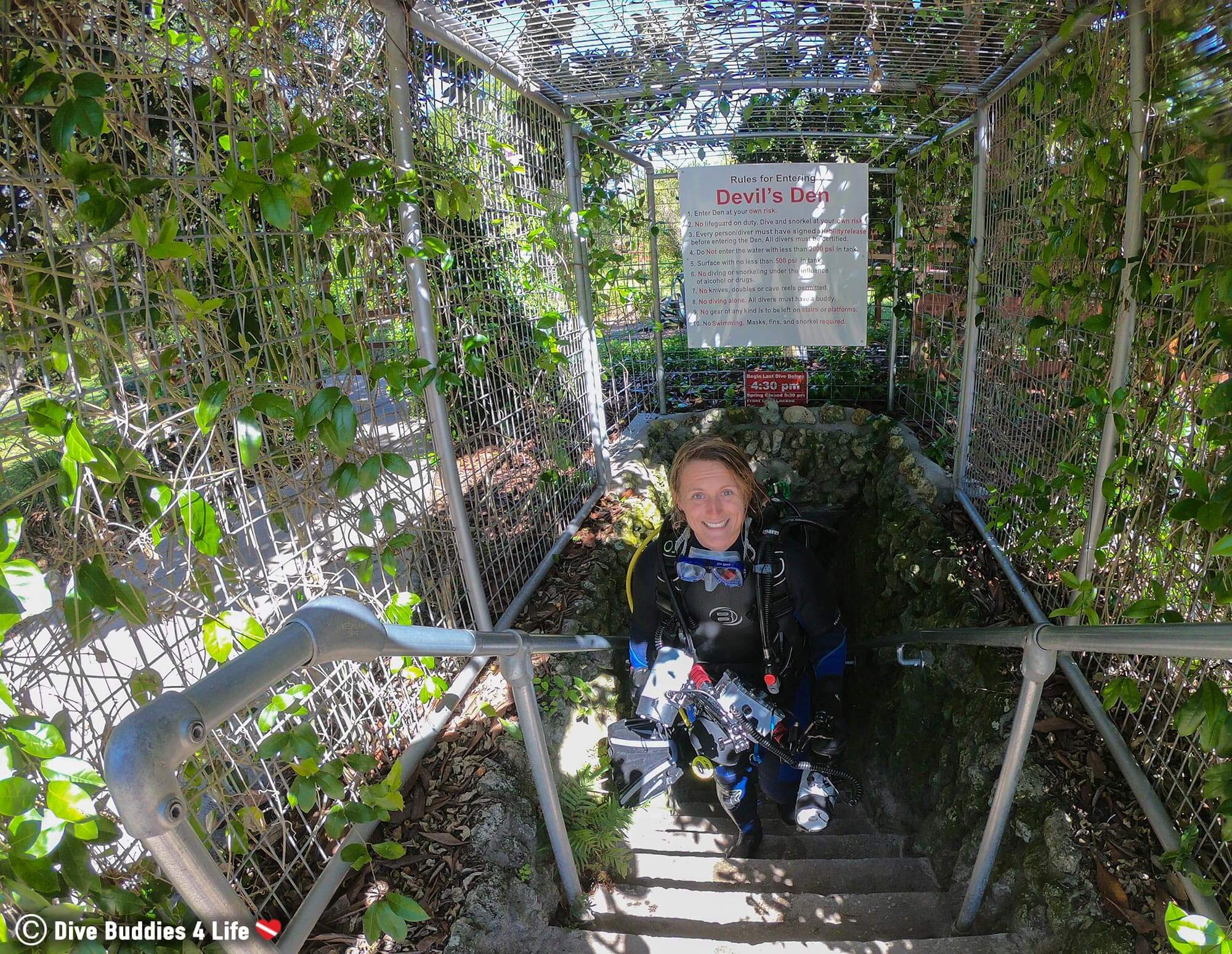 The great news about visiting the Devil’s Den Prehistoric Spring? You don’t need to be a scuba diver to appreciate this fantastic showing of a Floridian aquifer. Snorkelers are welcome to dive into the natural wonders of this prehistoric grotto.

Snorkeling is done on a first come first serve basis and can get very busy midday, which is why the center has implemented a maximum two hour snorkeling period. 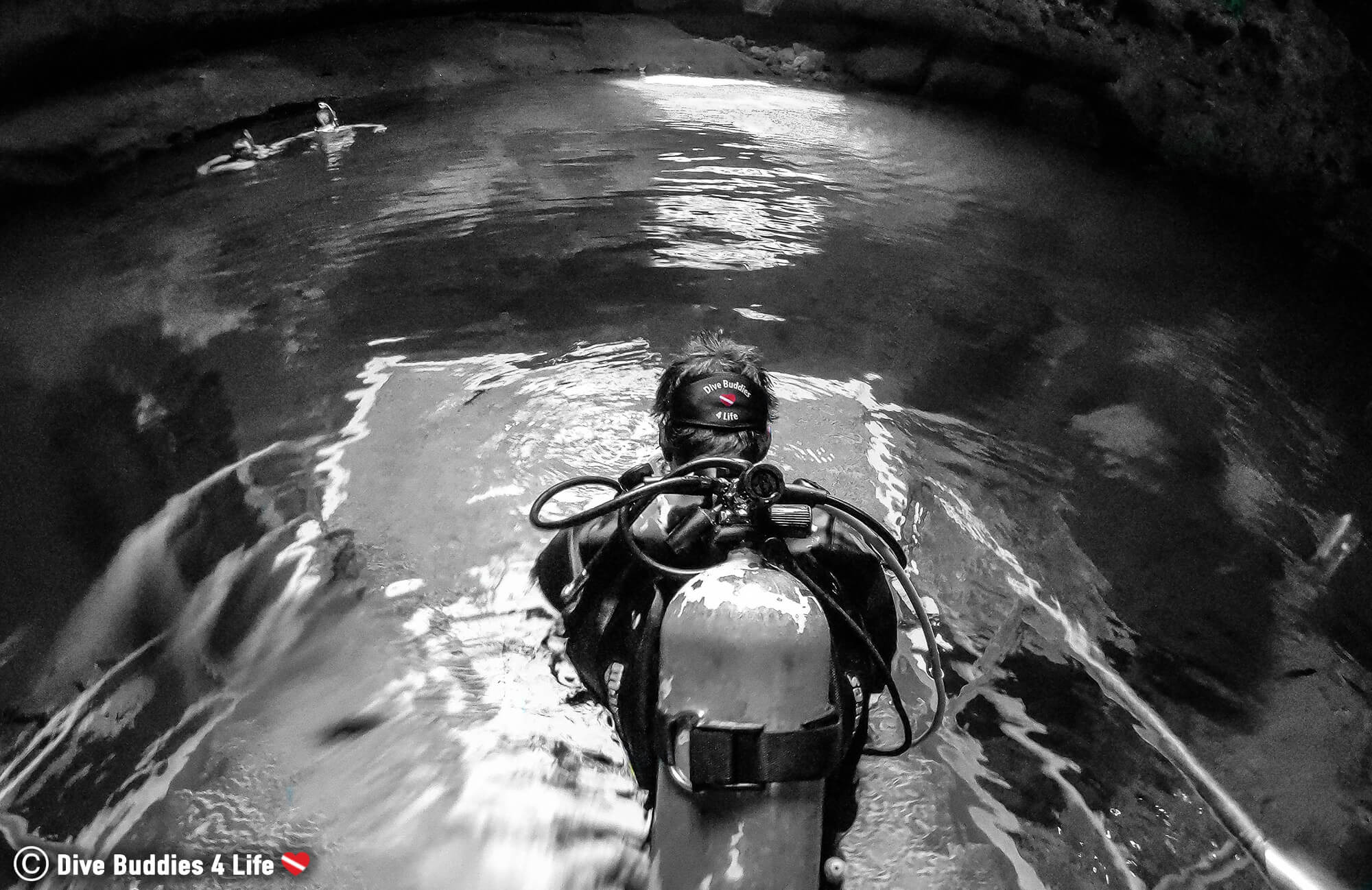 The Good, the Bad and the Ugly of the Devil’s Den

Unfortunately, our time underwater at Devil’s Den definitely got the short end of the stick. After a couple of spectacular dives at the Blue Grotto and Ginnie Springs caves, we found this dive site to be pretty lackluster.

I mean don’t get me wrong, the site itself was a sight for sore eyes, the staff was superb, and the visibility was right on par, but when I compare the depth and wildlife showing at the Blue Grotto or the geological rocks and fantastic scenery from Ginnie Springs, Devil’s Den pales in comparison.

Should you visit the Den of the Devil? Personally, I would say yes, but be careful when you choose to go. It gets super crowded on the weekend, so avoid Saturday and Sunday at all costs! On the whole Devil’s Den is definitely a nice dive to do, especially for the fact that it is relatively shallow and sheltered for new divers. I would also strongly consider just enjoying this site as a snorkel and freediving destination as opposed to a diving spot (the light from the cavern hole shows beautifully at the surface).

Would I pick a dive at the Devil’s Den over diving the Blue Grotto or Ginnie Springs? NO WAY! For Joey and I, Devil’s Den was without question ranked number three out of three, on our list of dive site to try in the Williston-Florida area.

Have you been to the Devil’s Den in Florida? What did you think of scuba diving or snorkeling in this eerie dark cavern? 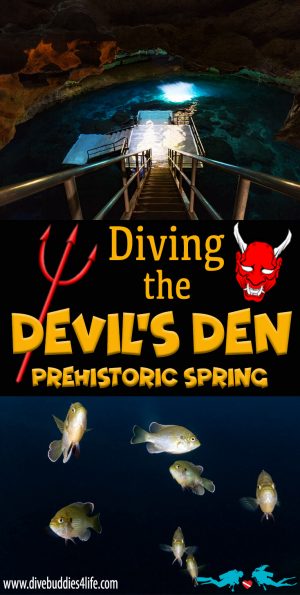