Snorkeling with Manatees in the Springs of Crystal River

The morning was pitch black. The time read 4 AM. The plan was to pile in the car and make the drive from Daytona Beach all the way across the state of Florida to the Gulf side coast.

As a scuba diver, ocean lover and marine biologist, I am obsessed with underwater critters – and – will go to phenomenal lengths to get in the water with them. That’s why, it should come as no surprise, that I planned an extensive adventure far from our accommodations, just to go snorkeling in Crystal River with some big beautiful manatees. 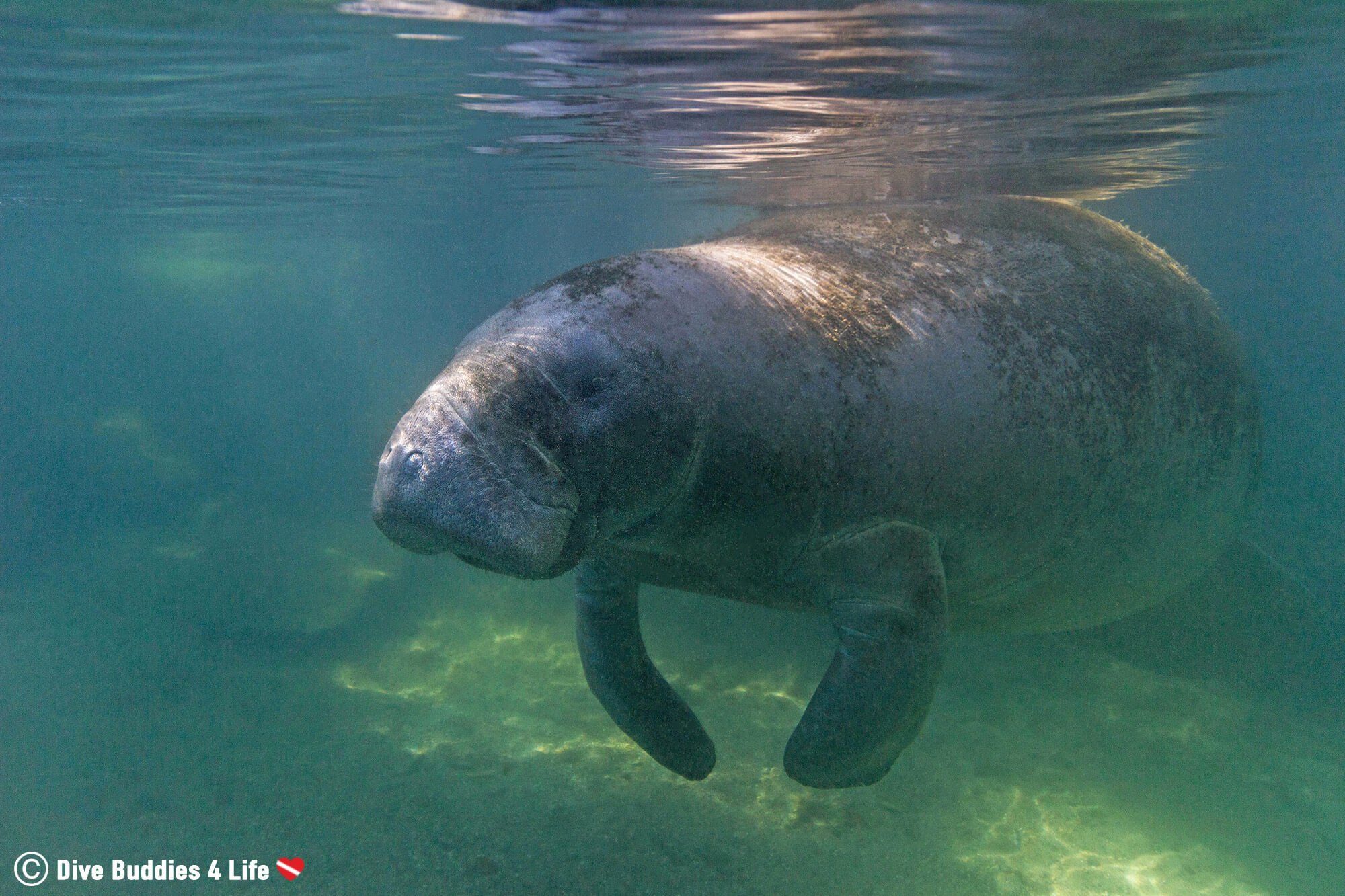 At over 1000 lbs (455 kg) and measuring up to 13 feet (4 meters) long, manatees are marine mammals from the order Sirenia, which include dugongs and the extinct Stellers sea cows.

These slow-moving vegetarians, which are close relatives to elephants, live their entire lives in the water, moving from marshy coastal waters to the open sea. Their habitat, depending on the species, ranges from the Caribbean Sea and the Gulf of Mexico to the Amazon Basin and West Africa.

Interesting Fact: It documented that manatee (and their dugong relatives) were once mistaken by sailors for mermaids. There are also rumors that these human-sized creatures, gave rise to the legend of these mythical sirens. 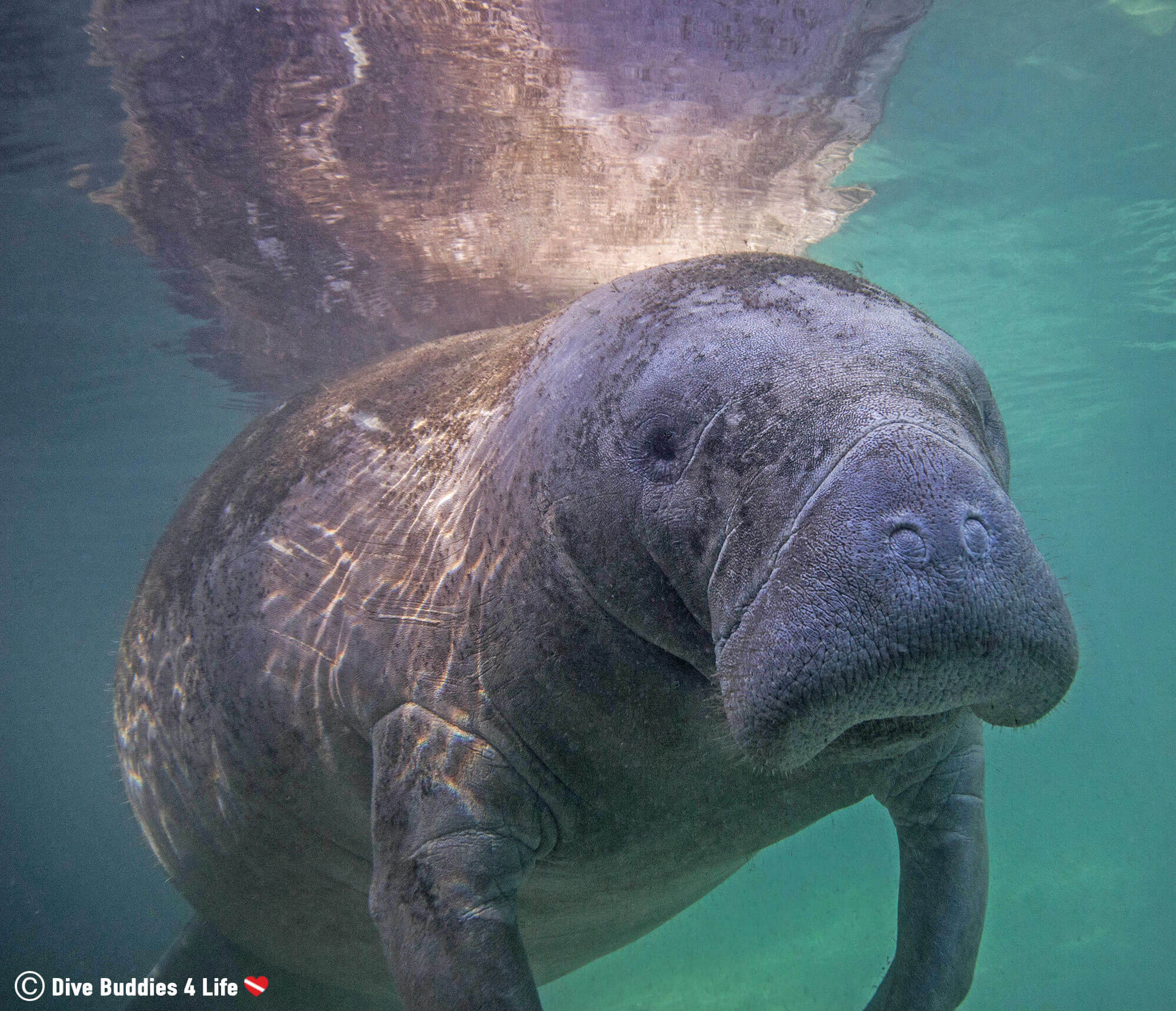 The US state of Florida is known for many things, but it is perhaps best known for its seasonal residents – the West Indian manatee.

The West Indian manatee is the largest of the three manatee species and has been on the endangered species list since the 1970s.

This marine mammal can adapt to living in fresh, brackish and saline water. Due to body composition and lack of thick insulating fat, in Florida’s winter months, the West Indian manatees leave the colder 68-degree ocean waters seeking refuge inland, in freshwater springs, to survive and stay warm. 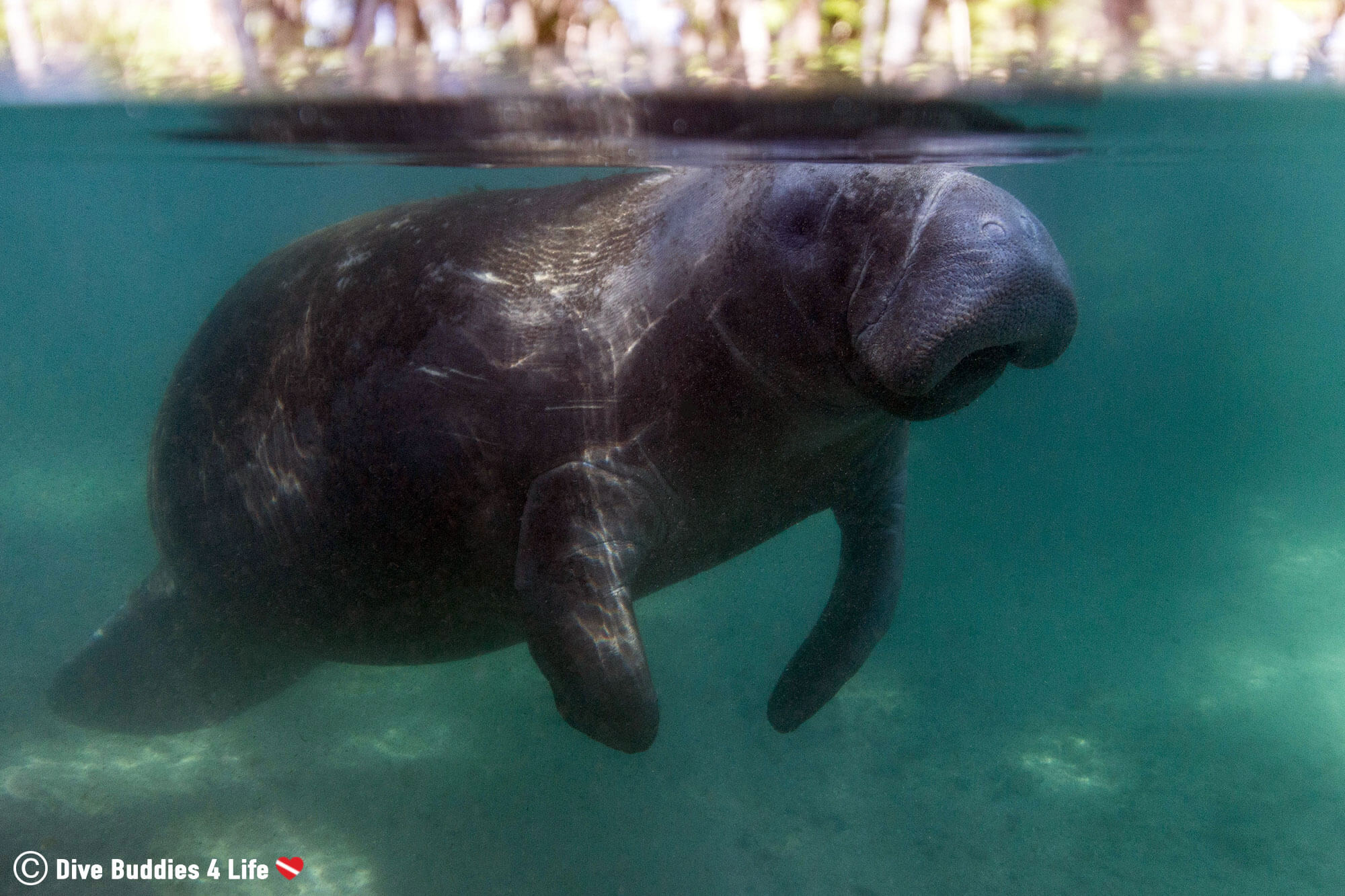 Nowhere else in the world will you find more manatees in the winter months than in Florida.

Maybe it’s the surplus of inland springs giving off consistent 72-degree water temperatures or maybe its the many power plants which also heat surrounding water. Whatever the case most scientists agree that because the manatee is limited in their ability to thermoregulate, they often depend on external heat sources for warmth.

The sunshine state has a handful of coastal and inland places where these gentle herbivores are known to frequent, the two most popular spots being Blue Spring State Park and Crystal River.

Crystal River is a small town of about 3,055 residents, north of Tampa and west of Orlando. On top of having a multitude of freshwater springs which converge and dump into the ocean, it is the only place in the United States where you can legally swim with manatees.

There are approximately 70 springs in the 2.5 square kilometers of the Kings Bay/Crystal River area. Every day 908 million liters of freshwater are produced and flow westward eventually discharging into the Gulf of Mexico. As the temperature cools down, in the winter and spring, an estimated 600 manatees make use of this regions consistent springwater to stay warm.

Snorkeling with Manatees in Crystal River

To say a manatee is huge is not an overstatement. Weighing around 1000 lbs (455 kg), which to put things into perspective is about seven times my size, these animals are positively beastly.

At 7 AM, after filling out liability forms, getting fitted for wetsuits and listening to the manatee rules and regulations briefing, we boarded a houseboat and headed off into the maze of waterways that make up Crystal River.

The moment had arrived to dust off one of Joey and my snorkeling ambitions – swimming with manatees! 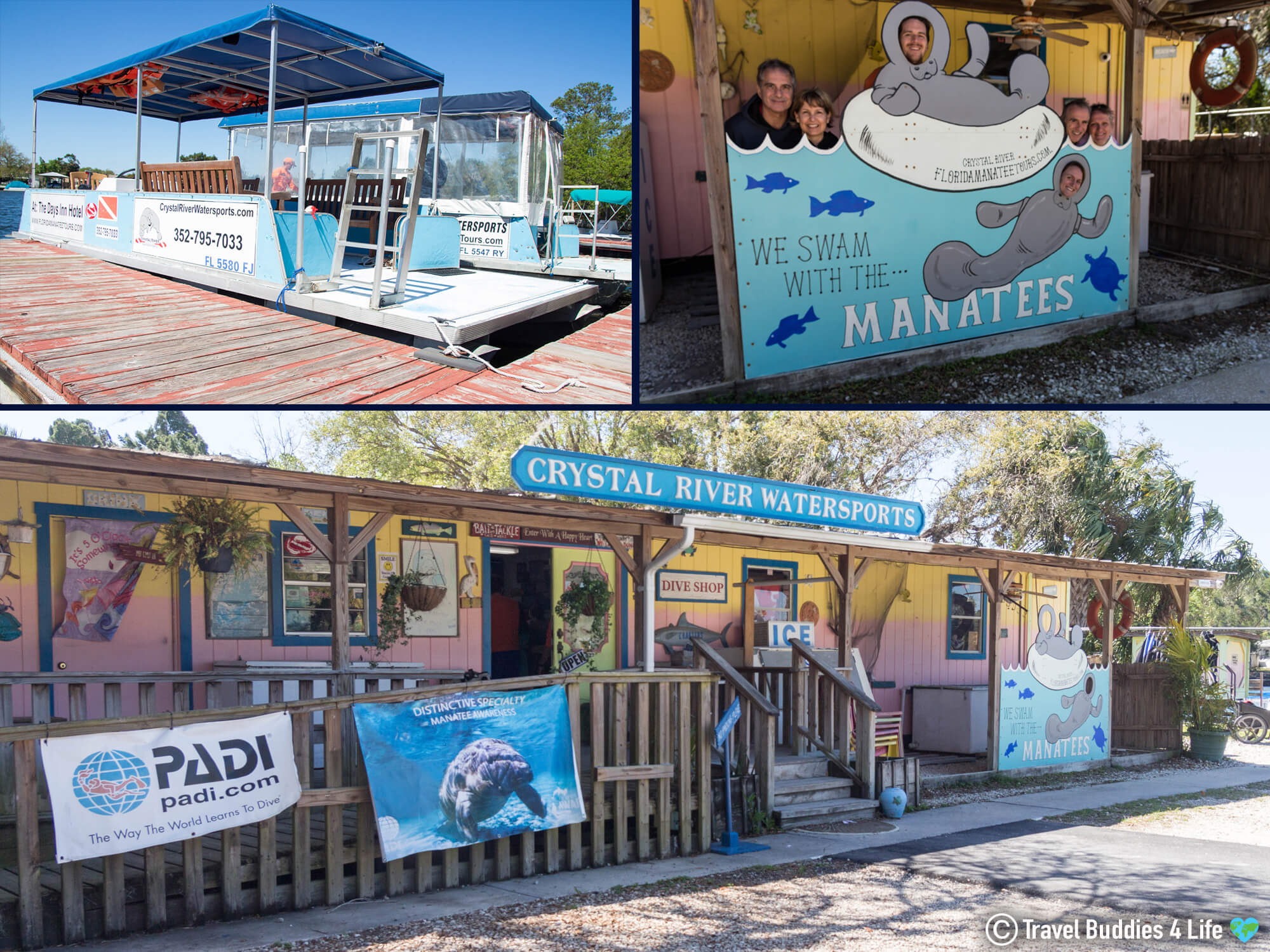 While no one can accurately predict where the manatees will be found, most tour shops have a relatively good idea of where the best spot is to see them will be. And with that in mind, when it came time to head out on the river, our captain informed us that we would be making our way, by water, towards Three Sisters Spring.

Three Sisters is a freshwater spring system in the Crystal River National Wildlife Refuge. It is made up of three small lobed inlets; Pretty Sister, Deep Sister, and Little Sister. Three Sisters located on the east side of Kings Bay and provides visitors with the opportunity to view manatees while swimming, paddling, canoeing and walking along the boardwalk. 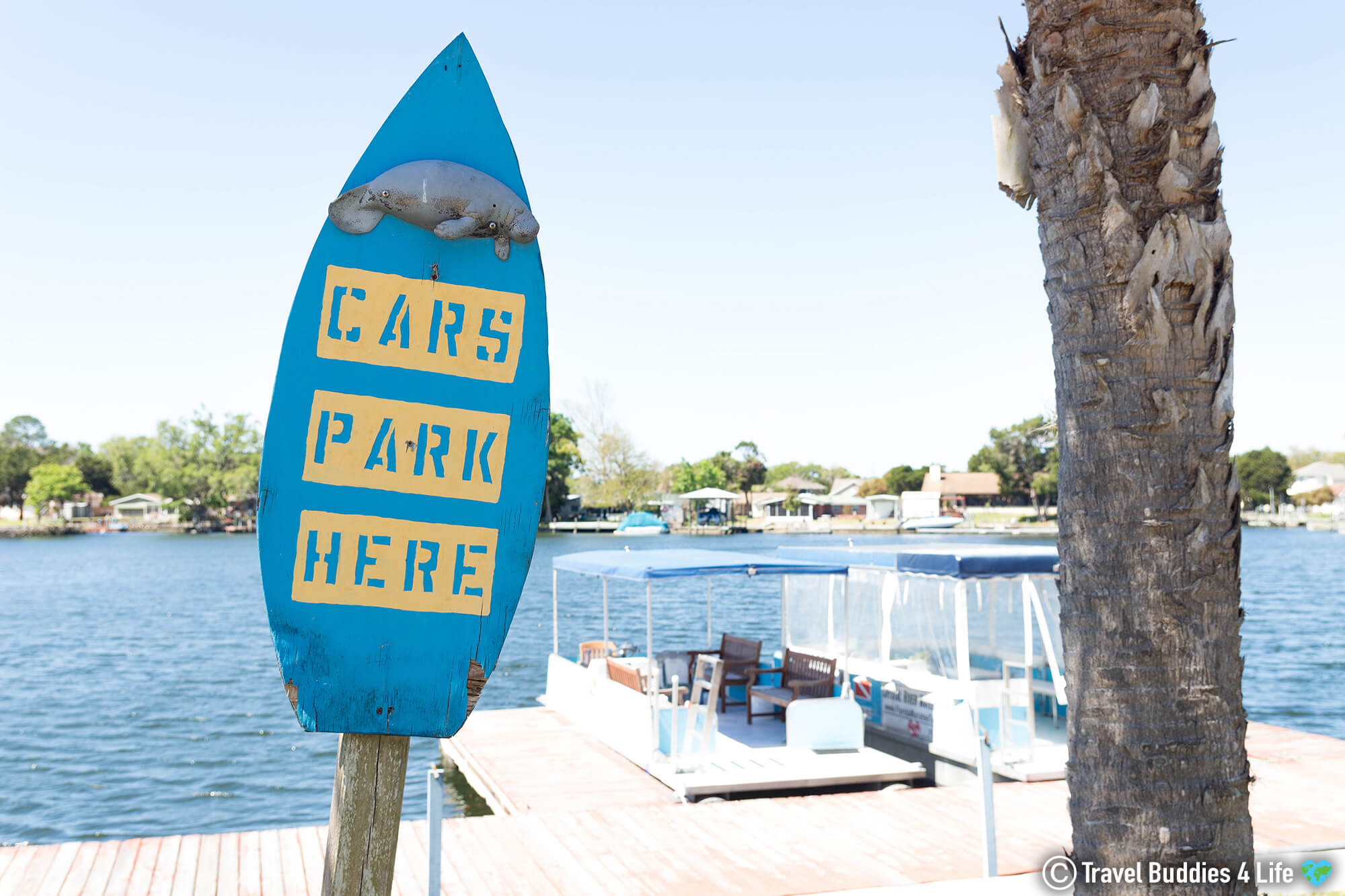 Getting to Three Sisters from our tour outfitter was a bit of a process. On top of the standard 20-minute boat trip, the high tide from the Gulf made it impossible for our boat to fit beneath the only bridge leading to the spring. And believe me when I say we tried – to the point that I was worried our covered houseboat would become a convertible.

Because of the temporary tidal impasse, we bided our time looking in other parts of Crystal River for manatees, to no avail. 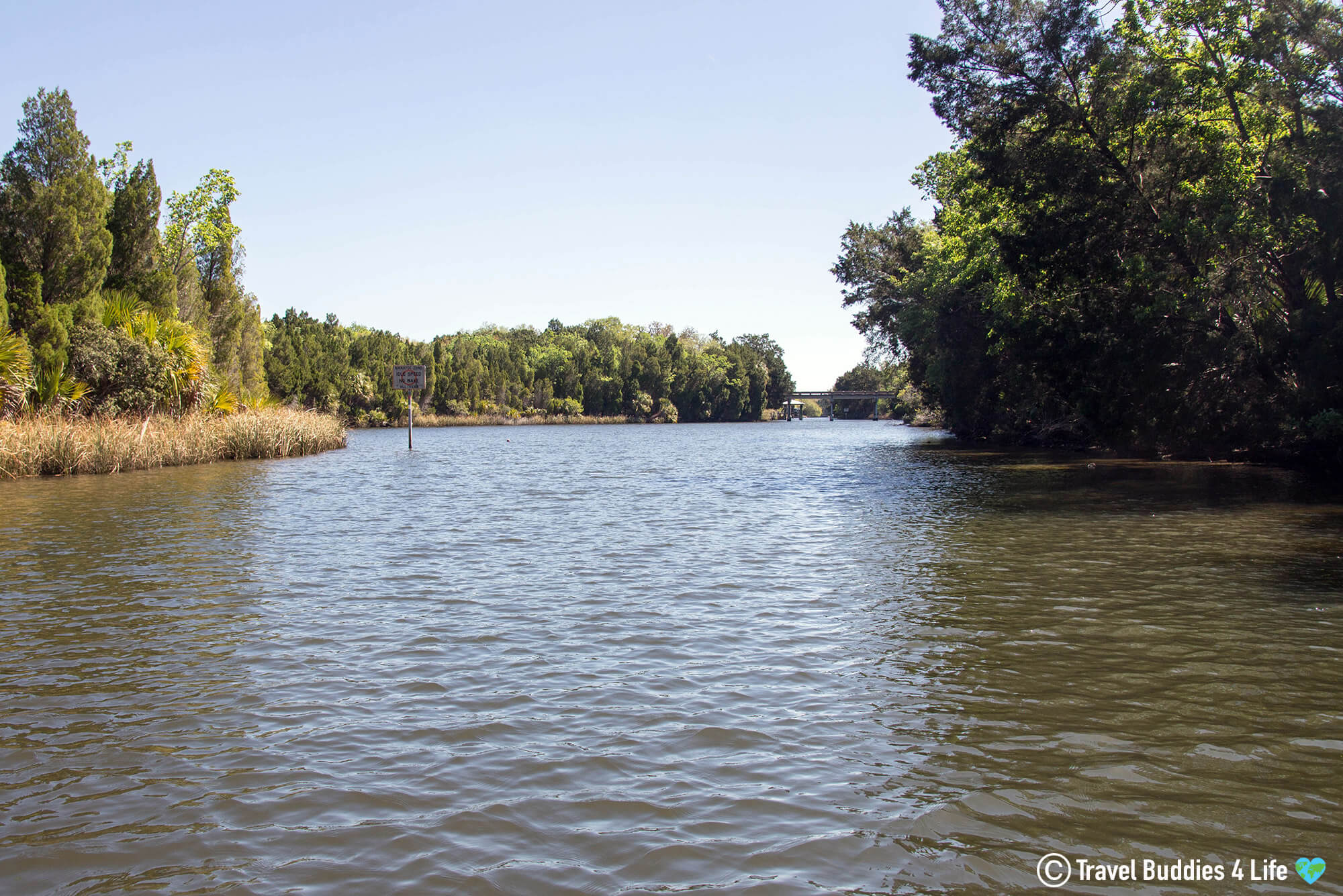 About halfway through the tour, we returned for another try at passing under the bridge that would bring us to Three Sisters Spring. Thankfully the tide had receded enough that we could fit beneath it.

Once clear of the metal frame it was full speed ahead into manatee territory.

The closer we got to Three Sister Spring the more excited I became. As we puttered along the river, I kept my eye on the lookout for ripples, splashed and other disturbances at the surface of the water which could indicate the presence of a manatee.

And then it happened!

It was in that moment I realized that for such a large porky animal – these modern-day mermaids can sure move!

Without further delay, the captain anchored the boat in the shallows while we prepared our already cold bodies to get in the even colder spring water. 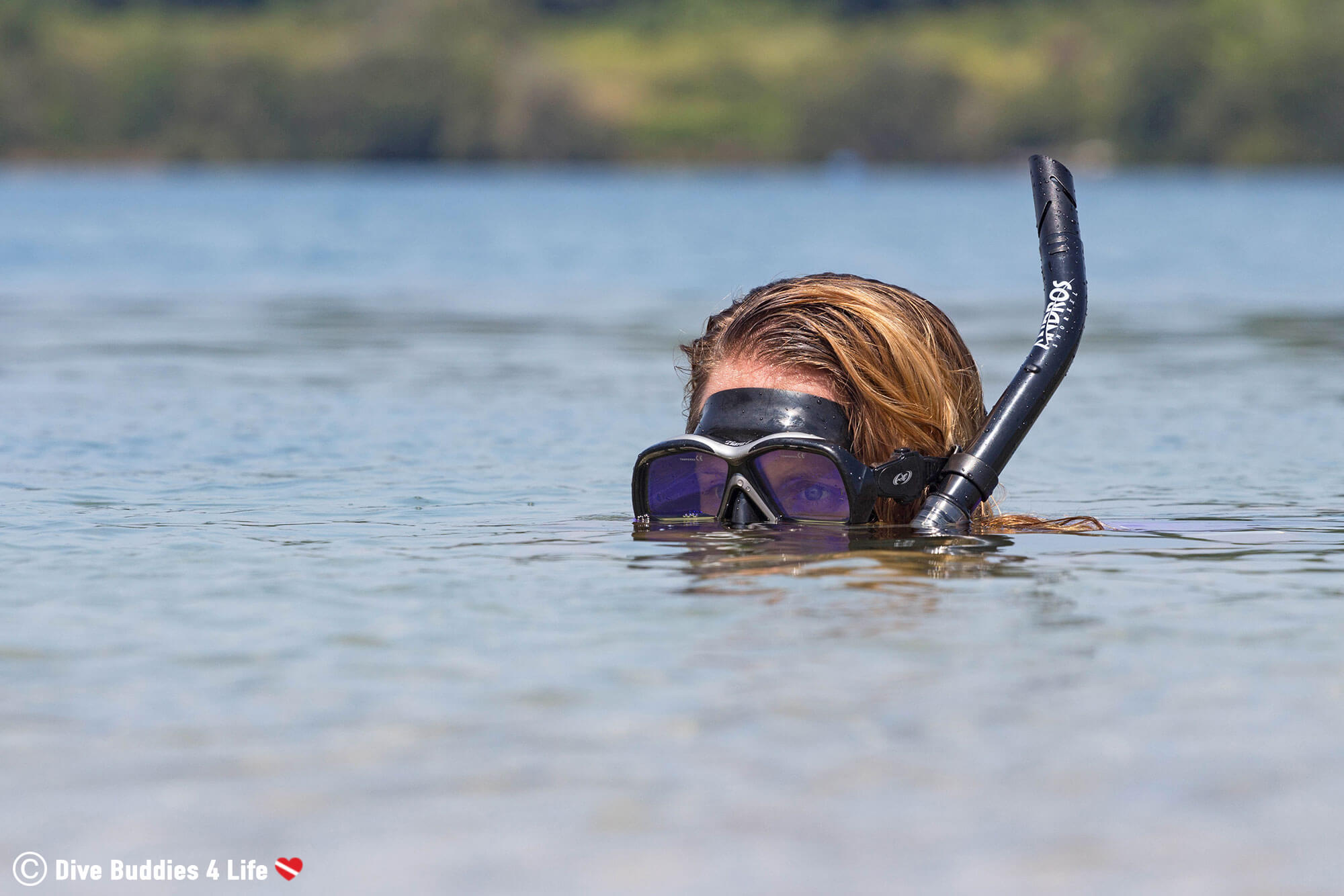 Even with a wetsuit on, I was mighty chilly – and I wasn’t alone. I could see Joey cringing as he floated in the river gearing up to follow our in-water guide up the spring.

When I first put my face in the river, I could see that the water was murky, to the point that I lost sight of the snorkelers several body lengths in front of me. But as we neared the spring and battled the soft flow of the current, everything cleared, showing like in an aquarium.

We passed through the narrow river mouth leading into Three Sisters.

Underwater – it was a soft sandy and rocky bottom. On the surface – it was dense green trees and plants hanging like garland all over the place. The surroundings made me feel like I was on a lazy river ride deep in the jungle. 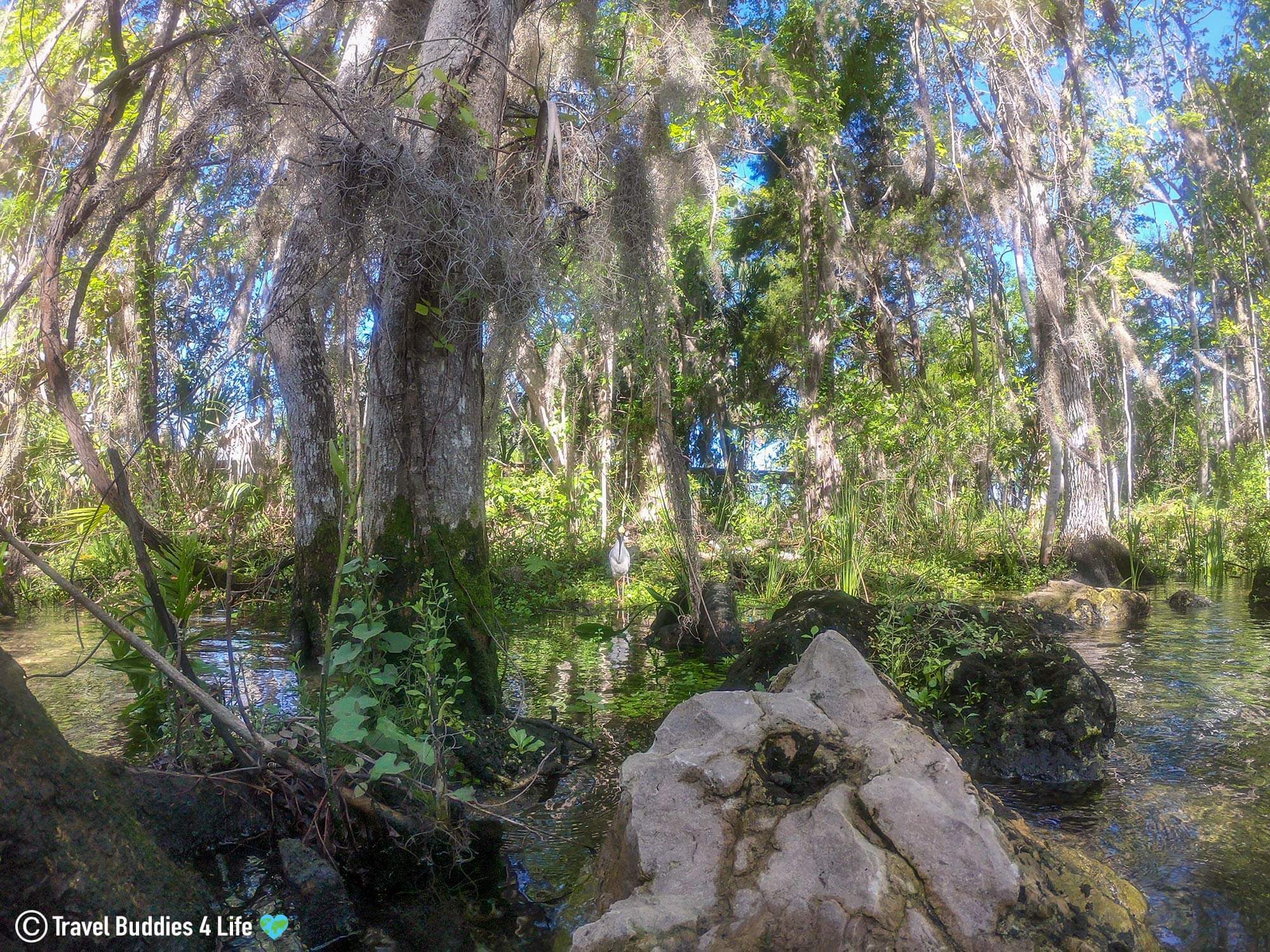 Further along Joey and I drifted, alternating between the deeper and shallower section of the spring. Some parts were so shallow I could stand on the bottom. Others I could barely scrape the bottom with my big toe.

Up ahead I heard shouting from our guide and knew it could only be one thing – a manatee.

As I waited patiently at the surface, its big old body came drifting by me, so close you could almost reach out and touch it, but I didn’t of course. I just watched and waited to see what it would do.

Unphased and unafraid by my presence, the manatee hung in the water column almost as if it were floating-in-space. Meer feet in front of it, I let myself float, suspended in this watery medium savoring this magical encounter.

As I watched this gentle creature move up and down in the water column as it needed to breathe, I could help but take in its elephant-like skin coated in patches of brown-green algae. That and, it’s utterly adorable hairy whiskers that seemed to cover every inch of its snout.

After spending more than our fair share of time with this face-to-face encounter, Joey and I left the lone manatee and swam further up the canal.

We knew we had arrived in the heart of Three Sister Spring when we hit the manatee motherload. First I thought they were rocks on the bottom, but then, as one moved and came up to breath beside me, I quickly realized that we were surrounded by dozens of them, all sleeping.


Big ones, small ones, mom’s and babies, there were even a few tagged manatees sleeping away the morning. It was an open invitation for muffled “oh my” gurgling through my snorkel.

Joey and I had just enough time to carefully swim around these giant blimps on the river bottom before our in-water guide herded us back out of the spring and towards the boat. All too soon our tour was over, and it was time to head home! 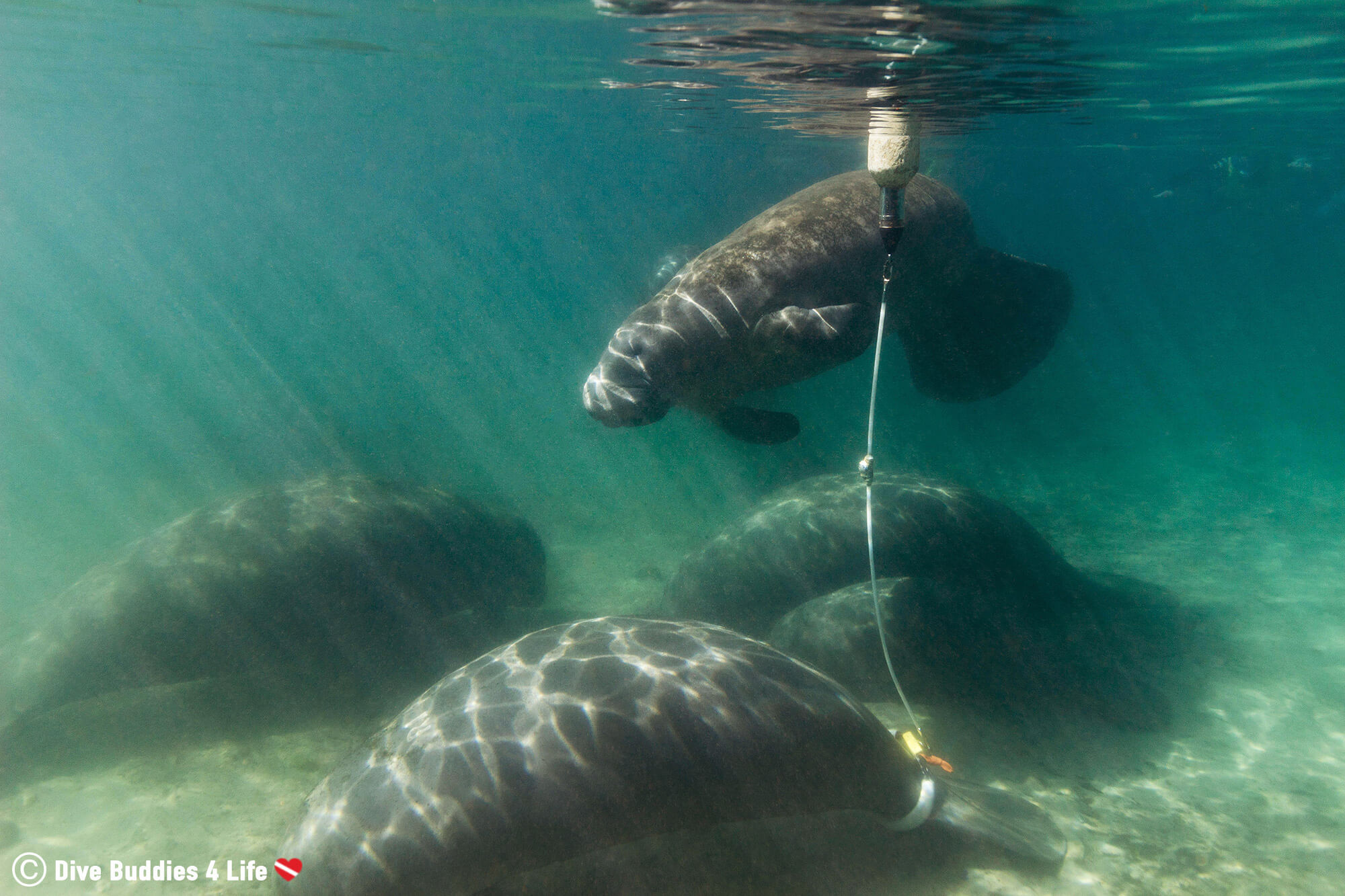 Our Sentiments on Snorkeling with Manatees

Snorkeling with manatees should be on your bucket list PERIOD.

As scuba divers, Joey and I have been privileged to witness some of the most wondrous things hidden from the rest of the world below the surface of the water. Snorkeling in Crystal River certainly ranks high on that list.

Meeting a manatee in the wild is a unique and life-changing experience. Watching such a giant animal slide so effortlessly underwater with no fear of people holds your attention to no end, and hearing their squeaks and whistles almost makes you feel like they are talking to your soul.

Would we recommend our outfitter?

I wasn’t necessarily over the moon with excitement with Crystal River Watersports. They were polite, professional and eventually found us manatee’s, but that is about the just of it. At the end of the day, after the boat ride to the location and problems getting under the bridge, we spend a grand total of 30 minutes in the water with manatees on our half day tour – indeed NOT what I was expecting.

With manatee tours being a dime a dozen in the Crystal River region, we would recommend trying your luck with an alternate tour provider. Hopefully, with them, you will get a better in-water experience swimming with the closest thing we have on this planet to mermaids! 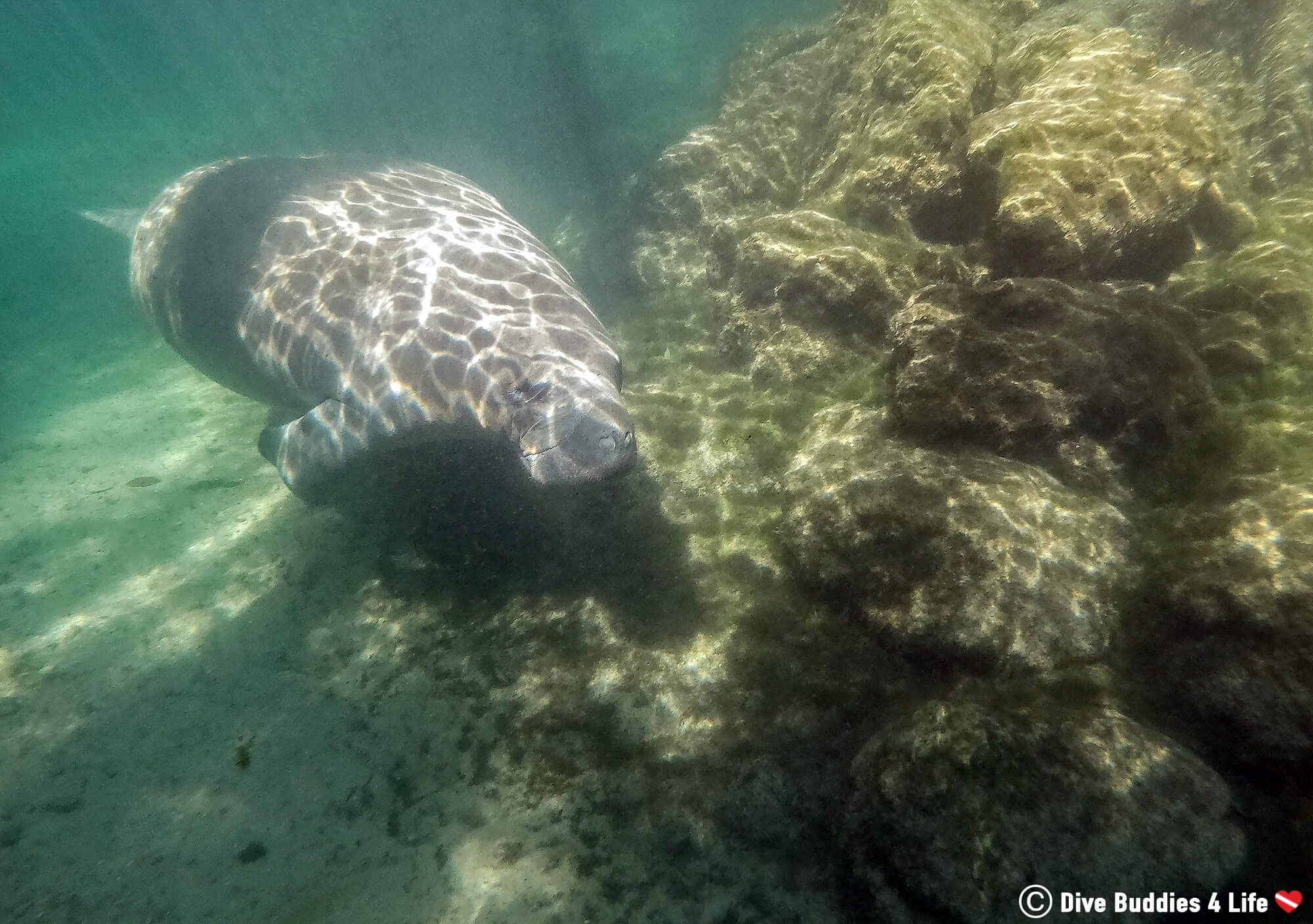 Our experience in the water with manatees was so incredible we’d love to do it again. Do you have any manatee tour operators that you would recommend in Florida? Let us know below. 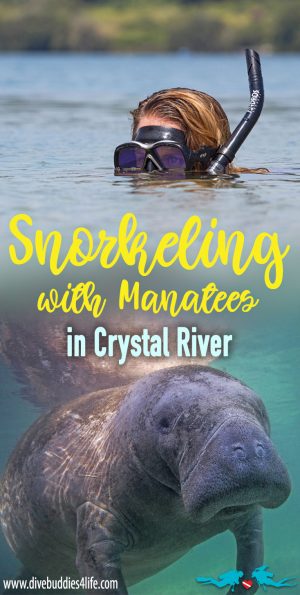