There’s nothing better than curling up with a great book – and you can’t beat a scuba diving thriller keeping you reading until the small hours of the morning. Nicholas Harvey’s second book of the AJ Bailey series, Gardens of the Queen, gave me a healthy balance of scuba fills and thrills. 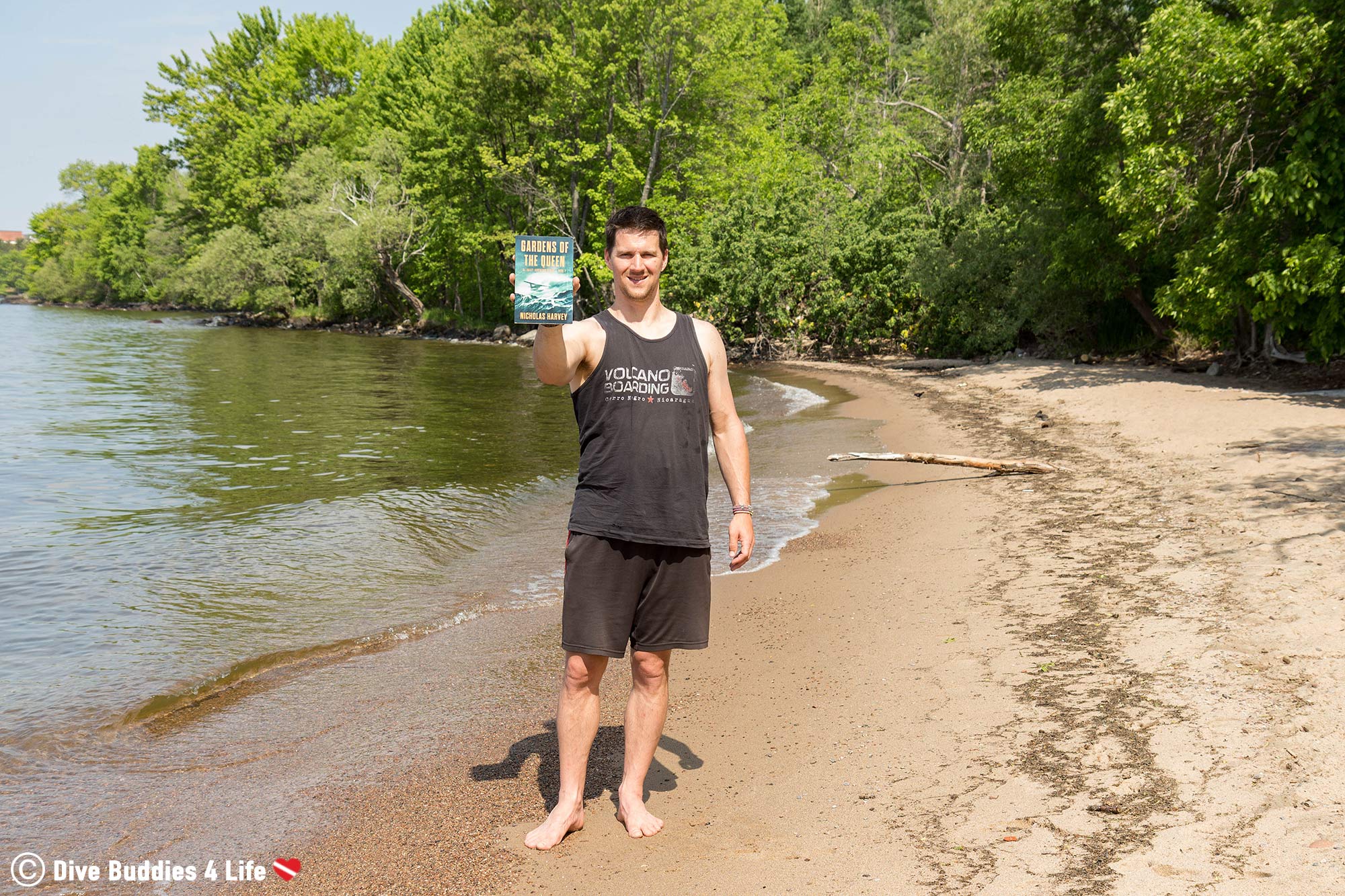 The Book: Gardens of the Queen

“A crash landing. A dangerous secret. A deadly game of espionage.

When a plane crash lands during a stormy night on Grand Cayman, dive shop owner AJ Bailey pulls the survivors from the roiling waters. The pilot, Carlos Rojas, recently fled Cuba with vital information, and now, Cuban and Russian forces are desperate to cover up the secret before it’s exposed. They will stop at nothing to silence Carlos. AJ finds herself up against the might of two governments as she tries to protect Carlos and the pristine coral reefs of the Gardens of the Queen. Can a small island dive operator prevail against ruthless, trained killers?”

Gardens of the Queen is the thrilling and fast-paced sequel to Twelve Mile Bank, but can be enjoyed as a stand-alone novel. 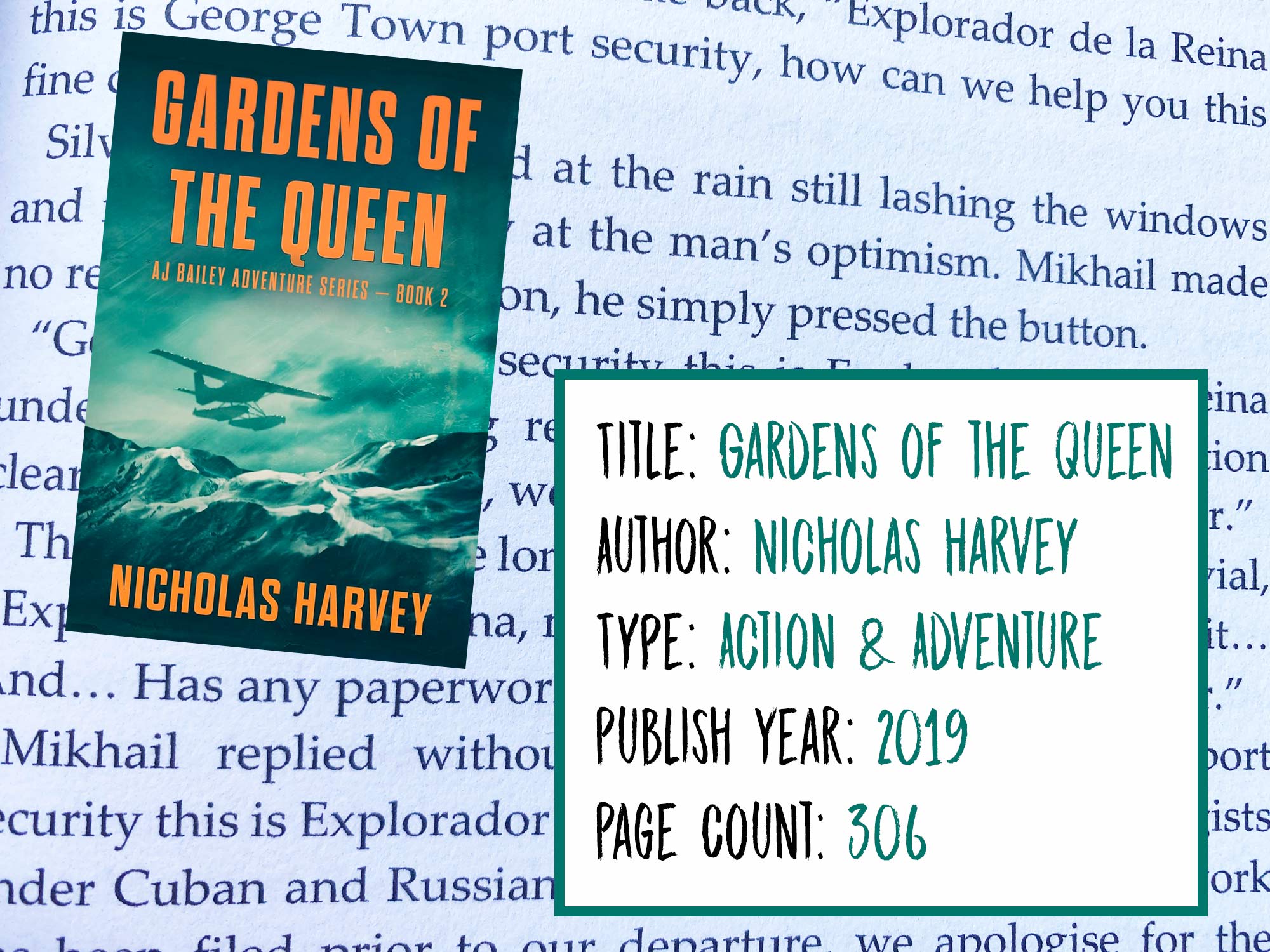 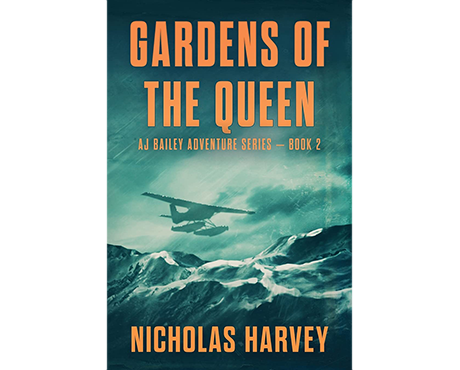 Gardens of the Queen – Nicholas Harvey: In this second book of the AJ Bailey Adventure Series, Nicholas Harvey brings the readers on yet another fascinating swirl of Cayman Island dive adventures. Get your copy on Amazon.ca or Amazon.com.

Raised in England, working in America and heading for Grand Cayman – that encapsulates Nicholas Harvey’s extraordinary life and career.

From a young age, Nicholas Harvey’s career has been dominated by motorsports as a driver, crew member and senior manager at the top level of racing. In the late eighties, he emigrated from England to America.

His writing flourished as a second career, beginning with his debut novel, Twelve Mile Bank (the first of the AJ Bailey Adventure Series). Through these books Nicholas’s writing combines a passion for diving, an obsession with military history and a love of the Cayman Islands. He places readers in the middle of the action where they can feel the ocean breeze brushing their face, water lapping at their feet and villains chasing amid the azure Caribbean.

Since the series’s pilot novel publication in 2019, Nicholas has been a full-time author. Now he and his wife Cheryl can be found touring the world in search of adventure on motorcycles, mountains and dive boats. 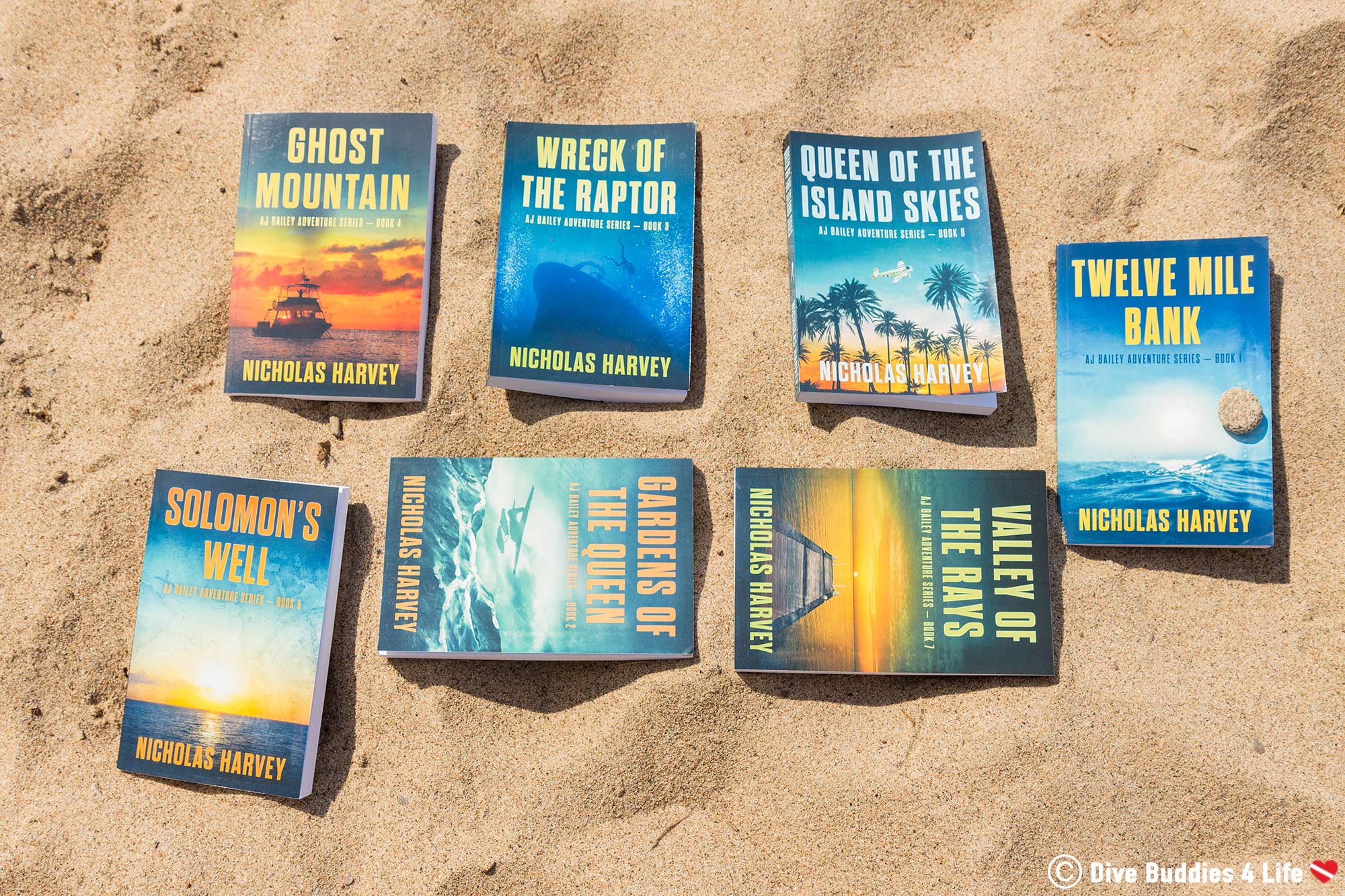 Join the Dive Quest to Save the Gardens of the Queen

Gardens of the Queen starts out in true action/adventure fashion with an adrenaline-jarring plane crash along the Cayman coastline. Here a local Caymanian and her illegal Cuban immigrant boyfriend stumbled upon a Russian and Cuban eco-conspiracy, to destroy Cuba’s Gardens of the Queen (Jardines de la Reina) one of the healthiest and most vibrant marine ecosystems in the world. Overall, the book is a deadly game of cat and mouse where returning characters AJ, Thomas, Pearl, Reg meld with new characters Carlos and Sydney in contention with a group of Russian eco-terrorists.

What I really liked about this book is that it builds off the main characters from the last book, Twelve Mile Bank, giving more personality, depth and breadth to familiar favourites. The book also introduces new faces, expanding the series character network and seemingly hinting that these new people will continue to make appearances in the books to come. The cast of unsavoury characters is also very well imagined. When an author gives me the subtle ability to hate a villain – I know they’ve done a good job dreaming up said character.

A second thing that I really loved about this story and feel is well-worth highlighting, is Nick’s progression as an author. Fundamentally this story is very equivalent to Twelve Mile Bank in terms of style and high-intensity action. If you enjoyed the first book, you will most certainly enjoy the second book. The author builds an intriguing plotline around a high-stakes hook and climax.

But delving deeper into the text, the most noticeable improvement between the first and second book of the AJ Bailey Series, is Nick’s experience at telling his story. In Gardens of the Queen, readers will find the small details and the elemental descriptions to the point and concise. And I really appreciated it! My mind tends to veer toward literacy that is refined and easy to understand
– hence why I found the book so enjoyable. 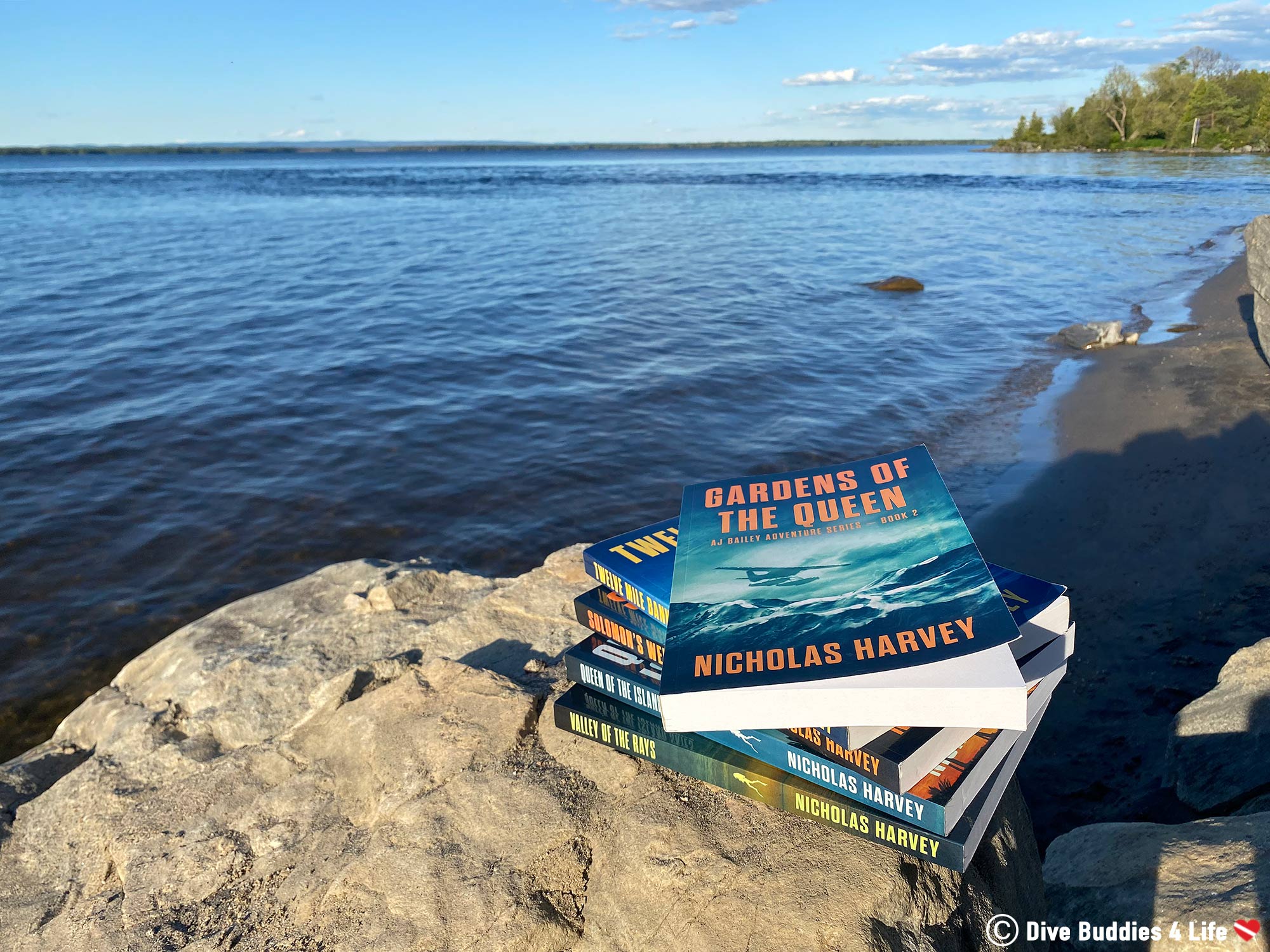 The Rest of the Series: AJ Bailey’s Scuba Diving Adventures

Gardens of the Queen was a fast pace read beginning at page one and following through all the way to the concluding page. This book is the second of a larger series written by author Nicholas Harvey. This collection of books follows Cayman Island dive shop owner AJ Bailey who becomes entangled in a series of happenstance events. The AJ Bailey Series includes; Cavern of the Lost Souls (Prequel Novella – 2019), Twelve Mile Bank (2017) Gardens of the Queen (2019), Wreck of the Raptor (2019), Ghost Mountain (2020), Solomon’s Well (2020), Queen of the Island Skies (2020), Valley of the Rays (2020), Neptune’s Wall (2020), Spanish Bay Reef (2021) and the Bloody Bay Rum Club (2021). 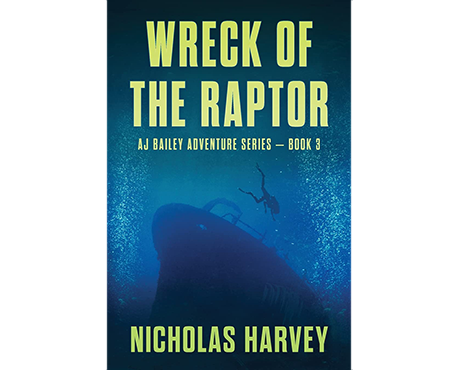 I truly enjoyed the second book of Nicholas Harvey’s series and look forward to my next encounter with AJ and the rest of the Cayman Island crew. If you’re craving a scuba diving-style ecological thriller, Gardens of the Queen is definitely the read for you.

Have you had the opportunity to read divemaster AJ Bailey’s Adventure Series? What was your favourite thing about this book? Let us know your opinion in the comments below.

Writers Note: This scuba diving book review was sponsored by the book author Nicholas Harvey. All novels were provided to Dive Buddies 4 Life by the author in exchange for the review. All comments and thoughts in relation to the book are honest and strictly that of Dive Buddies 4 Life. For more information on the book or to get your copy visit Amazon or Harvey Books website. 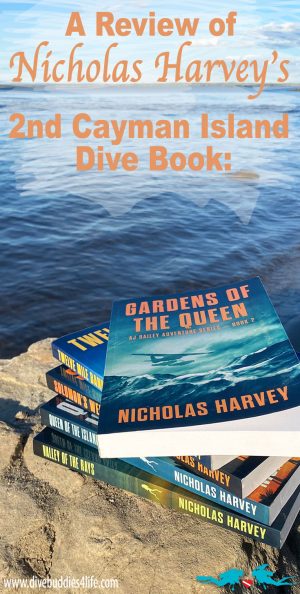