When it comes to heading underwater in France, the birthplace of modern scuba diving, there are some noteworthy places to explore – the southern Cote D’Azur, Normandy’s D-Day beaches, the Mediterranean island of Corsica… Being a country with plenty of coastlines, France has no shortages of places to dive. The sites are as diverse as the country is large. 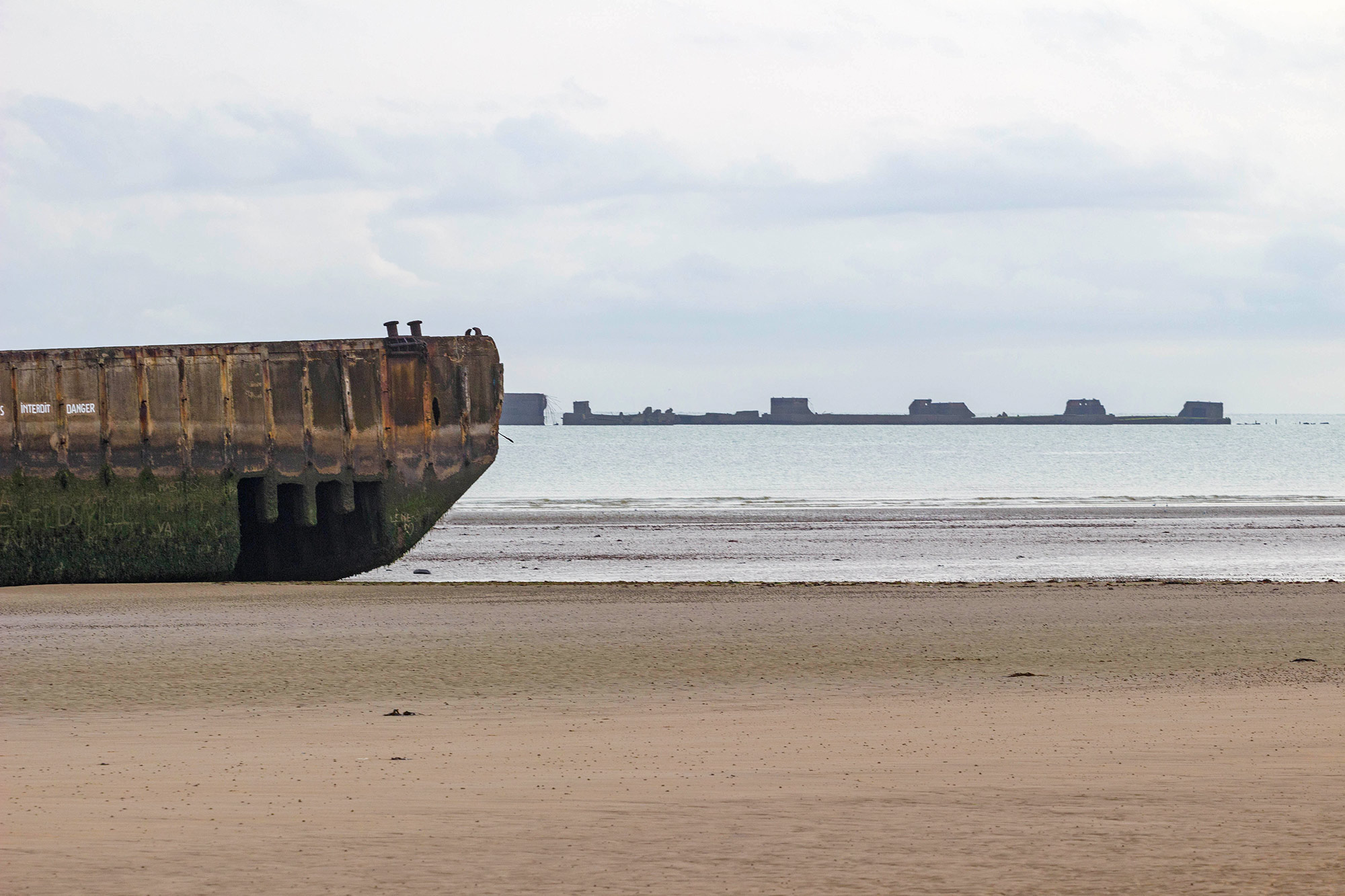 Scuba Diving the D-Day Beaches: Rooted in history, you’d be hard-pressed to find a diving local that offers a better opportunity to witness World War II wrecks. Dive into the D-Day landing beaches of Normandy and glimpse the Allied invasion that won back Europe from Germany.

So naturally, when Joey and I toured France, we tried to dip our fins into as many of these different diving regions as possible. This is what brought us to Brest, smack dab on the western extremity of the Brittany peninsula.

The Port City of Brest and the Brittany Peninsula

Brest is a French port city with a strong history linked to the sea. In 1631, the advantages of this seaport town were first recognized by Cardinal Richelieu. He constructed a harbour with wooden wharves soon to become a base for the French Navy.

During World War II, the Germans maintained a large U-boat submarine base in this city. After the Allied invasion of Normandy, the city was almost totally destroyed during the Battle of Brest.

Since the war, large parts of Brest have been rebuilt in utilitarian granite and concrete. This city is now an important military harbour after the one in Toulon. 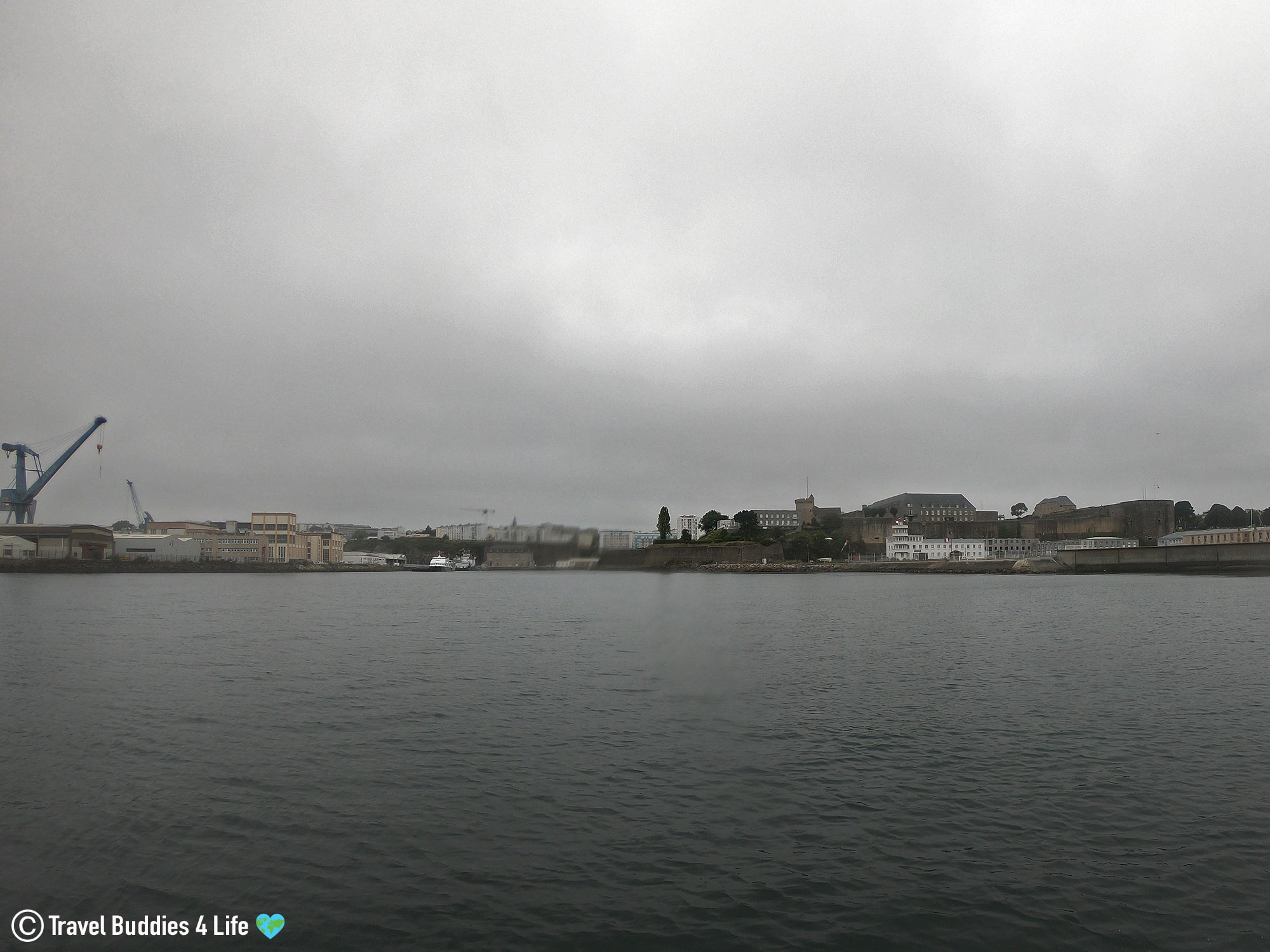 Brest diving sites are a combination of shipwreck and natural escarpment dives. I might not be the world’s biggest wreck enthusiast, but when Joey and I discovered how important Brest was as a military harbour, in particular during the second world war, we knew we had to hit the water with a local club.

We departed from the city’s busy industrial harbour, in a small pontoon boat. The weather was overcast and grey but the conditions were calm. Exiting the harbour, our boat was dwarfed in comparison to the larger sea-going vessels surrounding us. Puttering across the water, it took us less than 30 minutes to reach the two wreck diving sites we would be visiting that day. 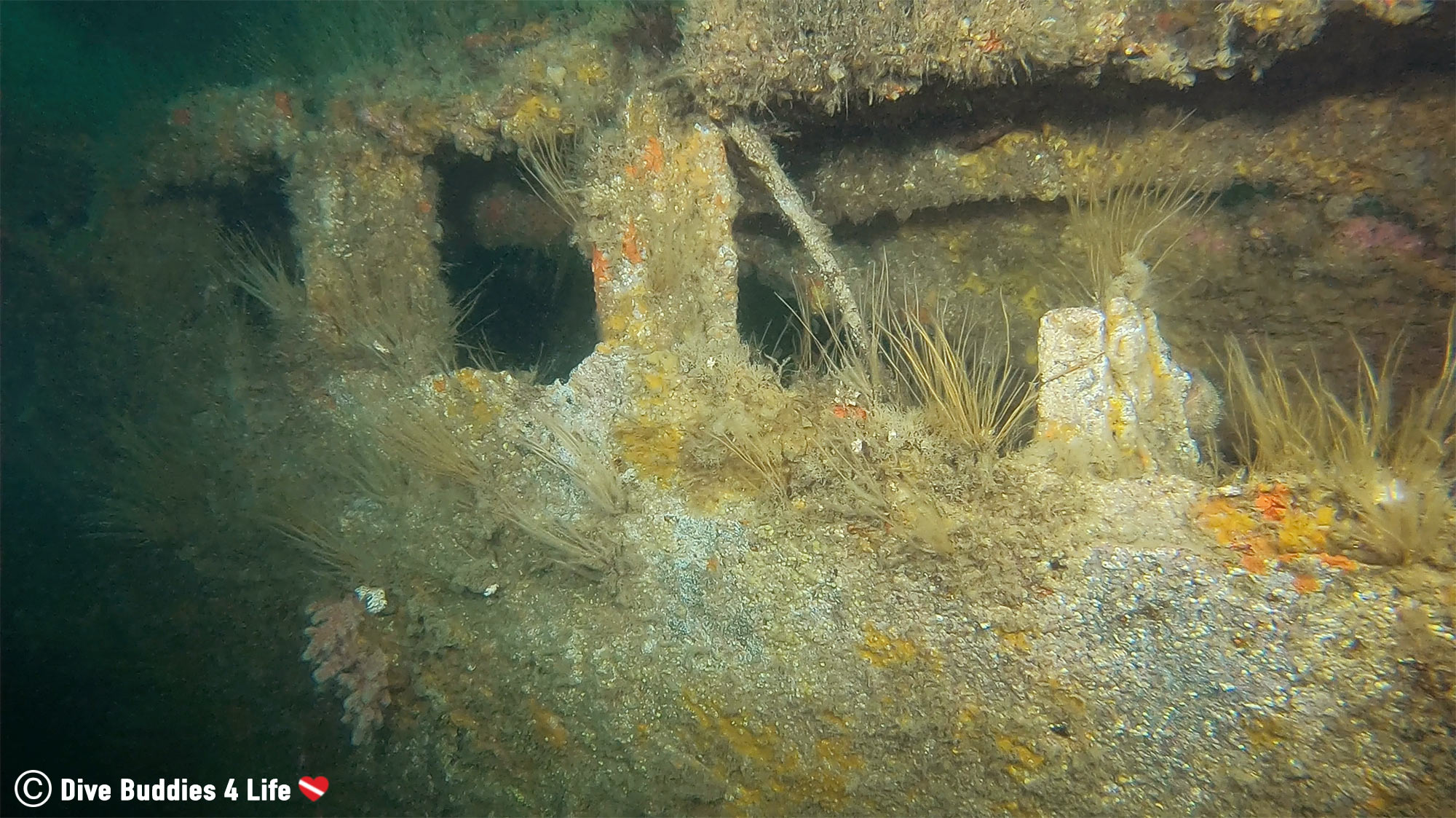 Our first dive was on a deep wreck resting at 30 meters (98 feet) on the seafloor. Although we aren’t 100% sure of the site’s name – I think this wreck was called Swansea Vale a British freighter that sank in 1918 at the entrance to the gully of Brest Harbour.

Jumping off the boat, Joey and I sunk into the cold productive waters of Brest with little regard to what we might spy. Right away we could feel the flow of current pushing us and grabbed a hold of the anchor line. Following the thick rope deeper we kept our bodies streamline to the flowing water and let our arms do the work.

Visibility wasn’t the greatest as the water was green and filled with plankton. It took a while but when we got closer to the bottom the wreck materialized into view. I began to get a sense of the scale for the wreck. It was a big guy! I also noticed how covered in marine life the age-old wreck was. 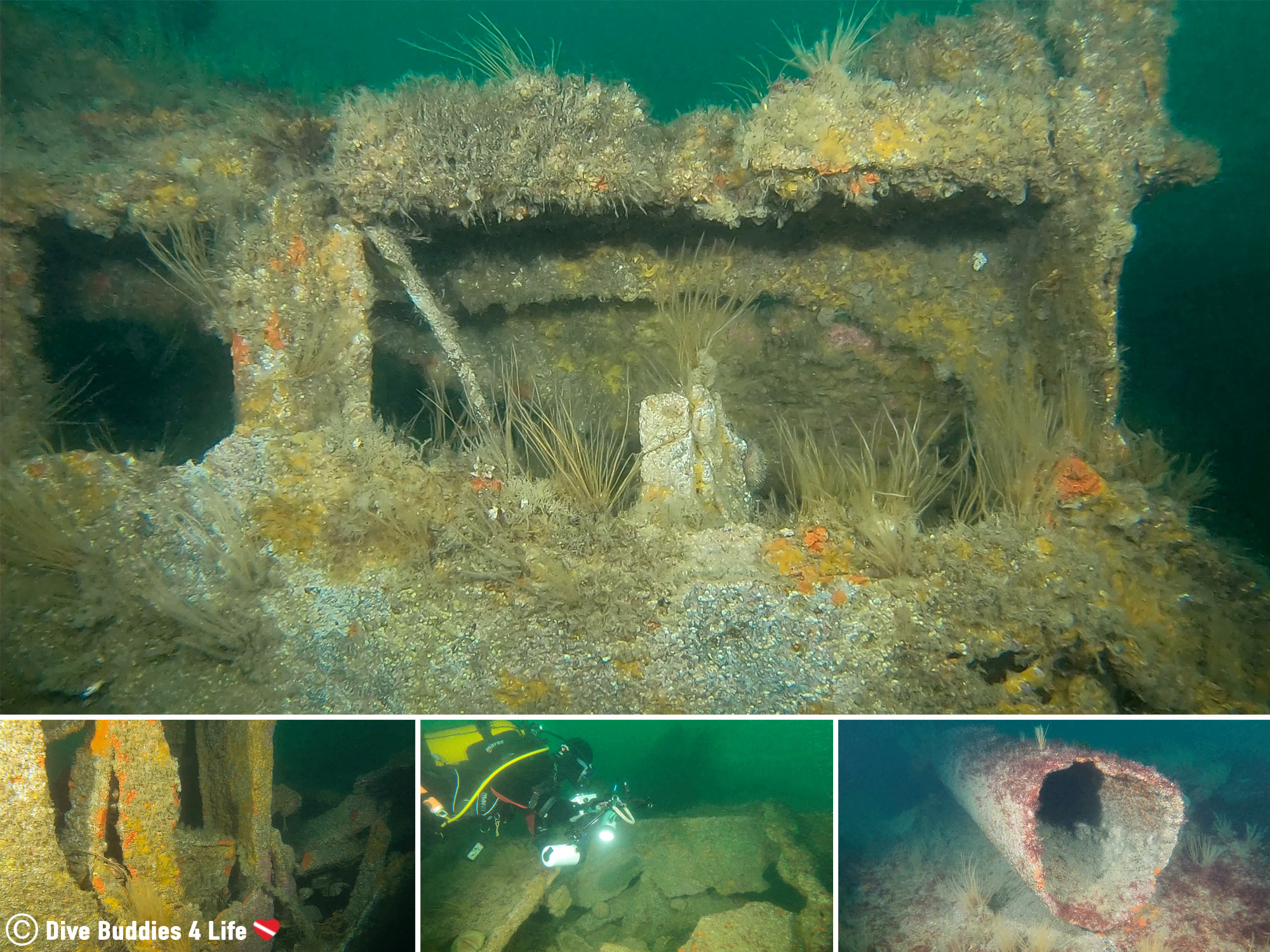 Small baitfish, a kind of hake swarm the top of the deck. They had stripes running vertically along their body and silver scales that seemed to catch Joey and my dive lights. Little wonder that seals make this a regular stop for feedings, it was like an all-you-can-eat fish buffet. Unfortunately, we didn’t see any on our dive.

As we worked our way down the length of the ship, Joey pointed out many wonderful macro features. Some pink and yellow adorned European painted top snails, craggy gorgonians and spiky sea stars. 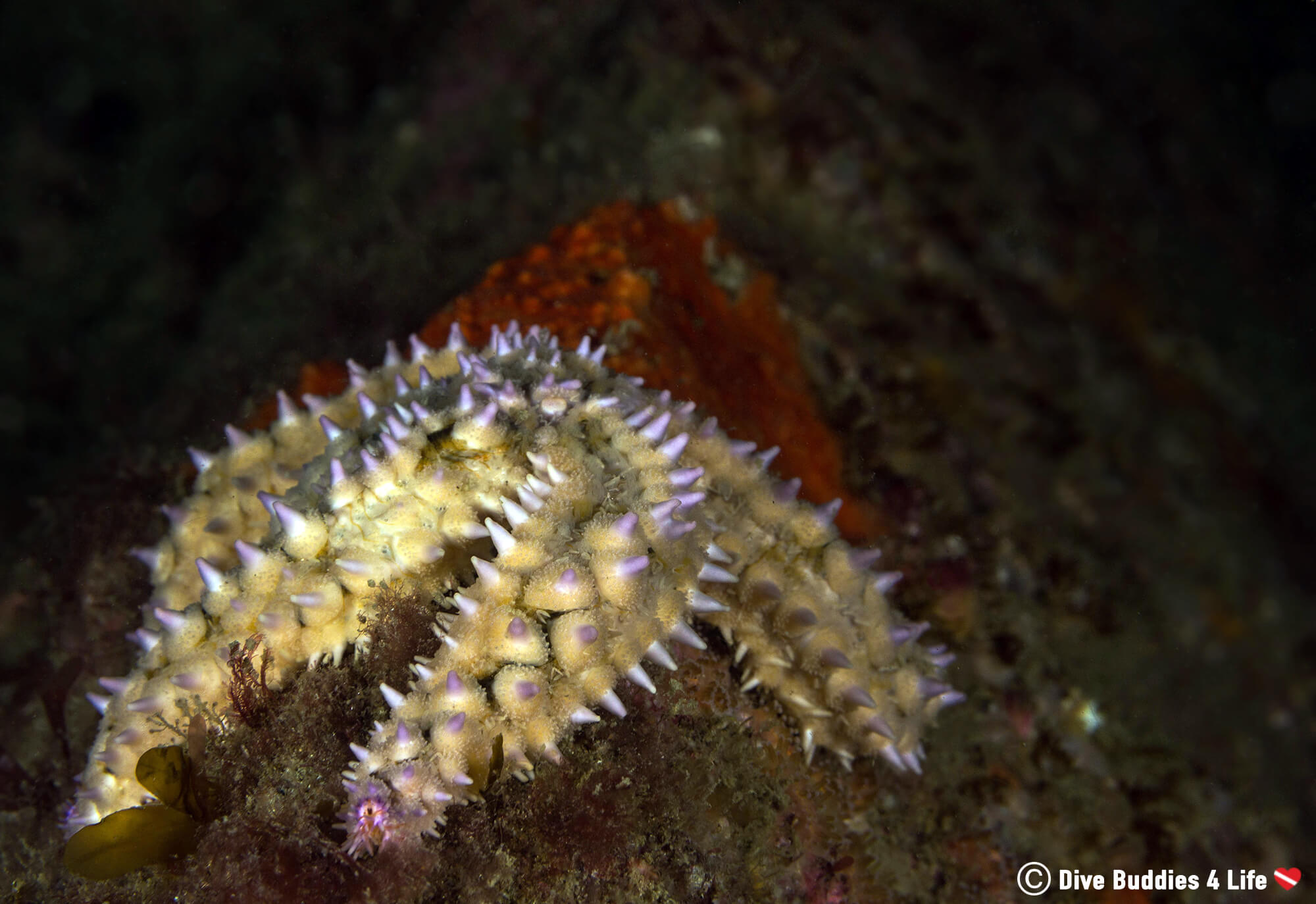 The port side of the ship as well as much of its scattered rigging were also covered in miniature light bulb tunicates (Clavelina lepadiformis). They look almost as if crafted from glass. As I stated before, I might not be the world’s biggest wreck enthusiast, but I do love to explore them. This one had plenty of life to keep a wreck skeptic happy as a sea clam. 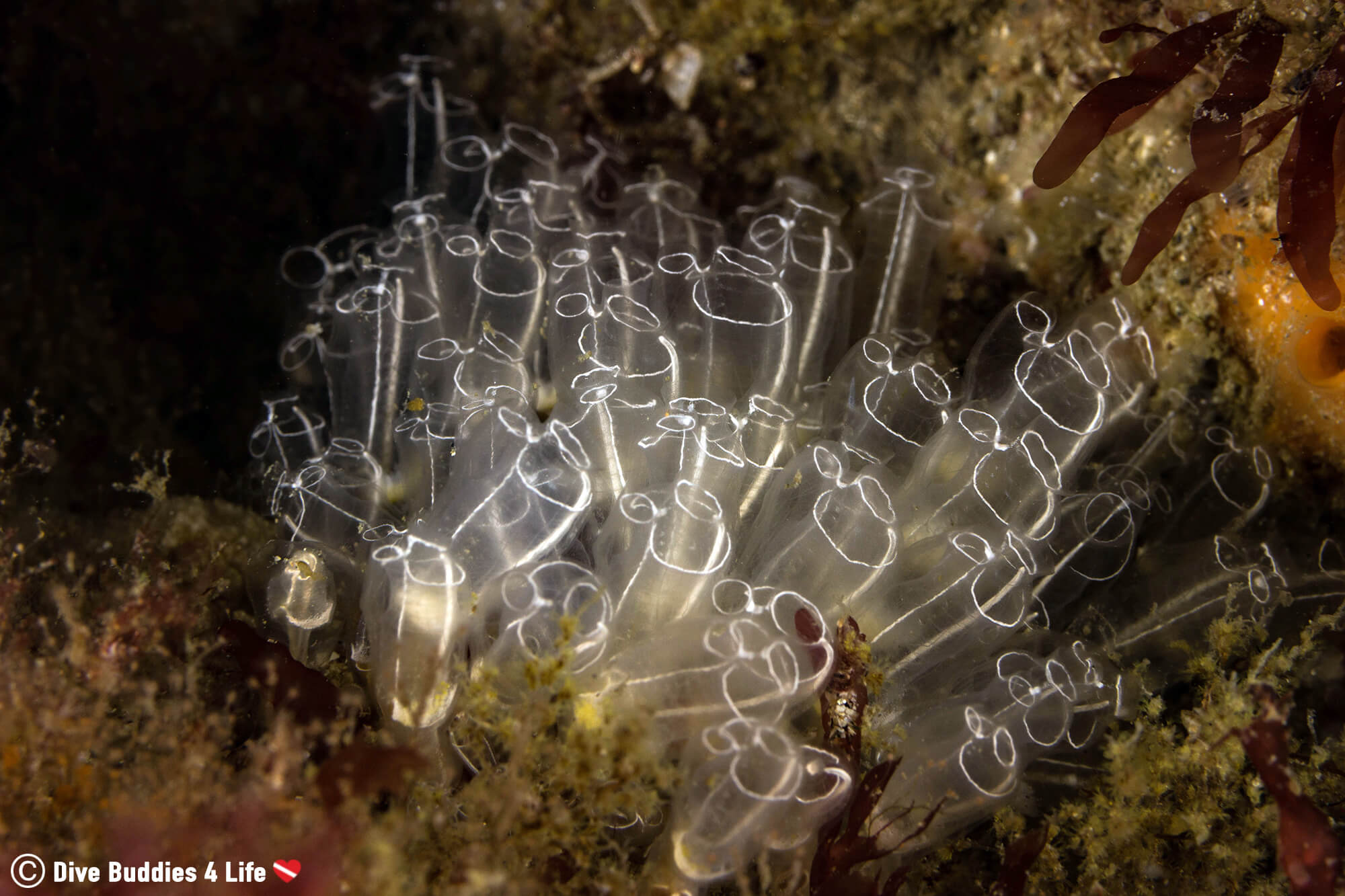 We hit our turnaround time and headed back for the boat. It was a promising dive but I couldn’t help but think there’s more to this wreck than I could see under these conditions.

Our second dive was at the Sec de Bertheaume, a wall dive reaching a depth of 20 meters (65 feet). We hopped off the boat and dropped down the descent line. Again the visibility was poor and there was a flow of current. Our shallower depth allowed decent light penetration.

The rocks cascaded down and down and down. Masses of shaggy plant life covered some of these boulders dotted with a zip of colourful sponge or tunicate. Fish weaved in and out of the rock pockets curious about the divers but hesitant to get close.

Progressing through the dive I noticed a few promising subjects and spent some time capturing a few intriguing images. I much preferred this dive site to the last, mainly because of the shallower depth and fauna coverage. 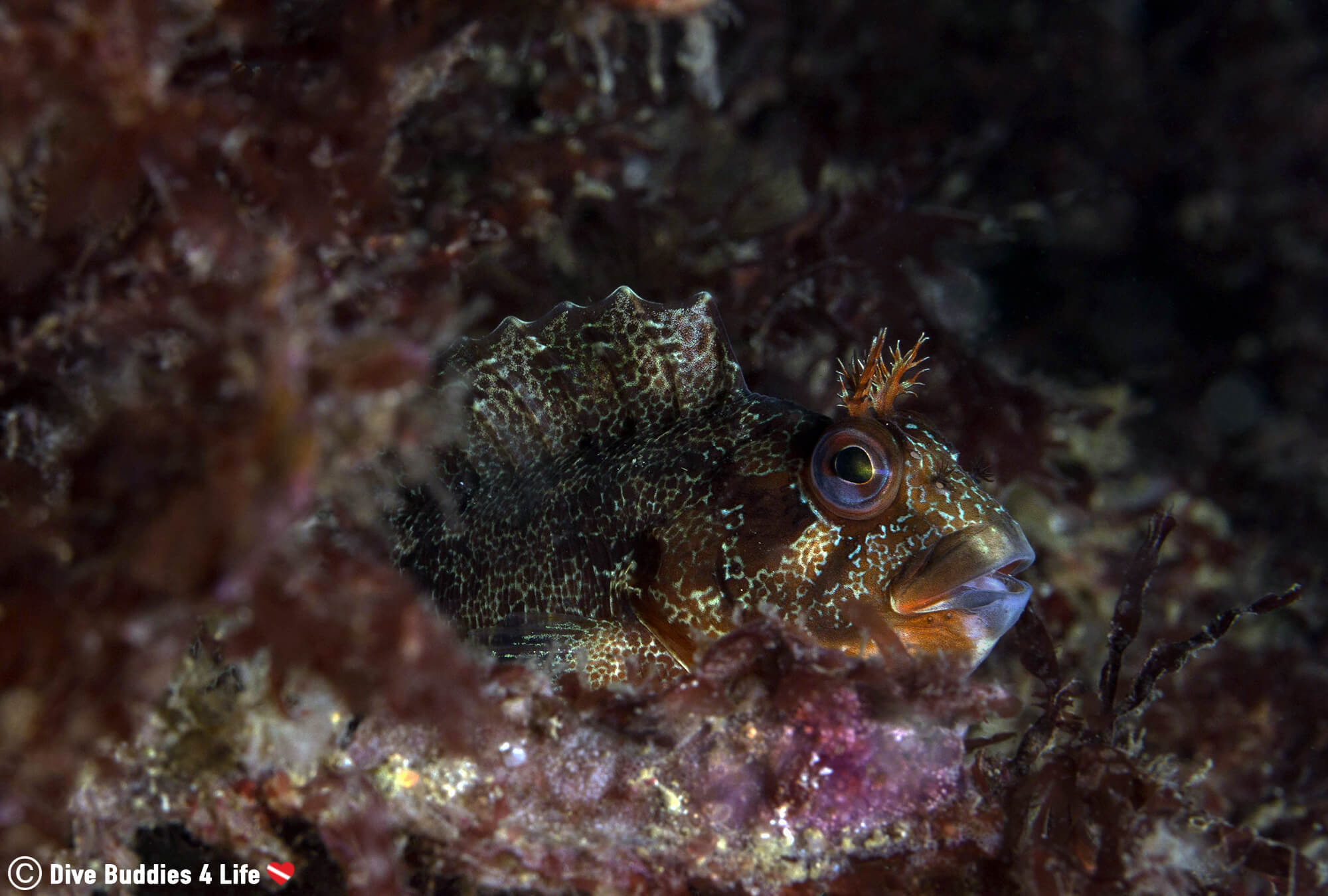 The cold productive waters of Brest is one of rugged beauty.

While scuba diving under strong current and limited visibility may not suit everybody’s fancy, for Joey and I, the environment had us falling in love with the macro life. We thoroughly enjoyed the wrecks, interesting critters and the warm welcoming arms of the local dive club. They helped us with everything we could need with regards to the dive site, but also let us do our own thing and run our own dive – as photographers we really appreciate being able to do that.

I would certainly take the time to dive into this location again if given the opportunity. 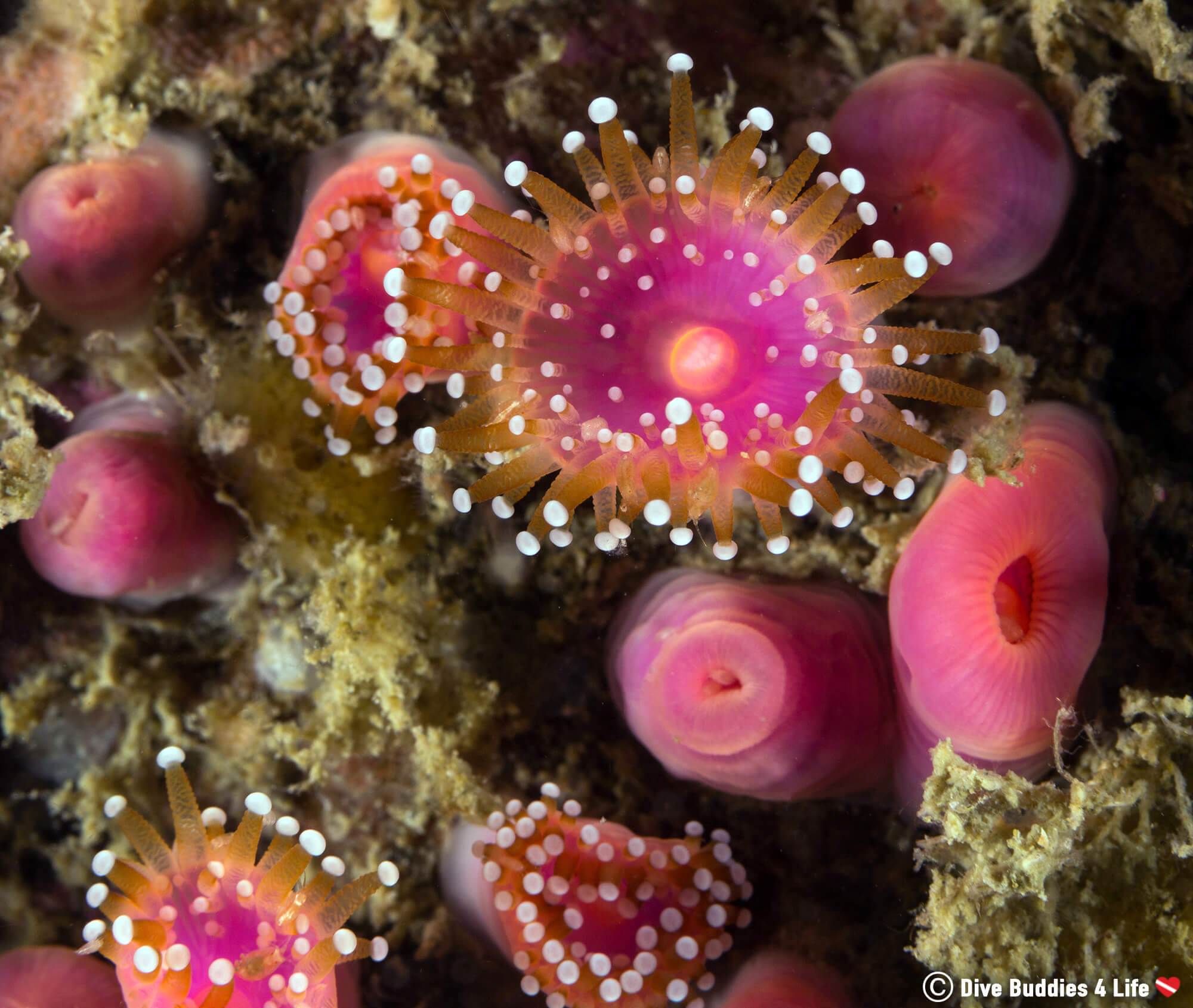 Have you ever gone diving on France’s Brittany peninsula? Where did you go and what did you see? 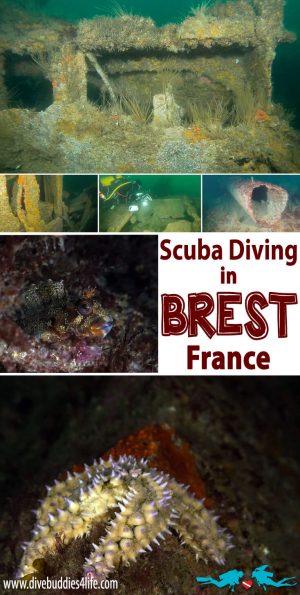