England: Diving into the Jurassic Coast

For many, the greatest draw to England is the Stonehenge, the medieval castles and the many other historic landmarks that stand as a testament to this country’s fascinating past.

For some, another world beckons – one found off the coastline, under the surface of the Atlantic ocean. 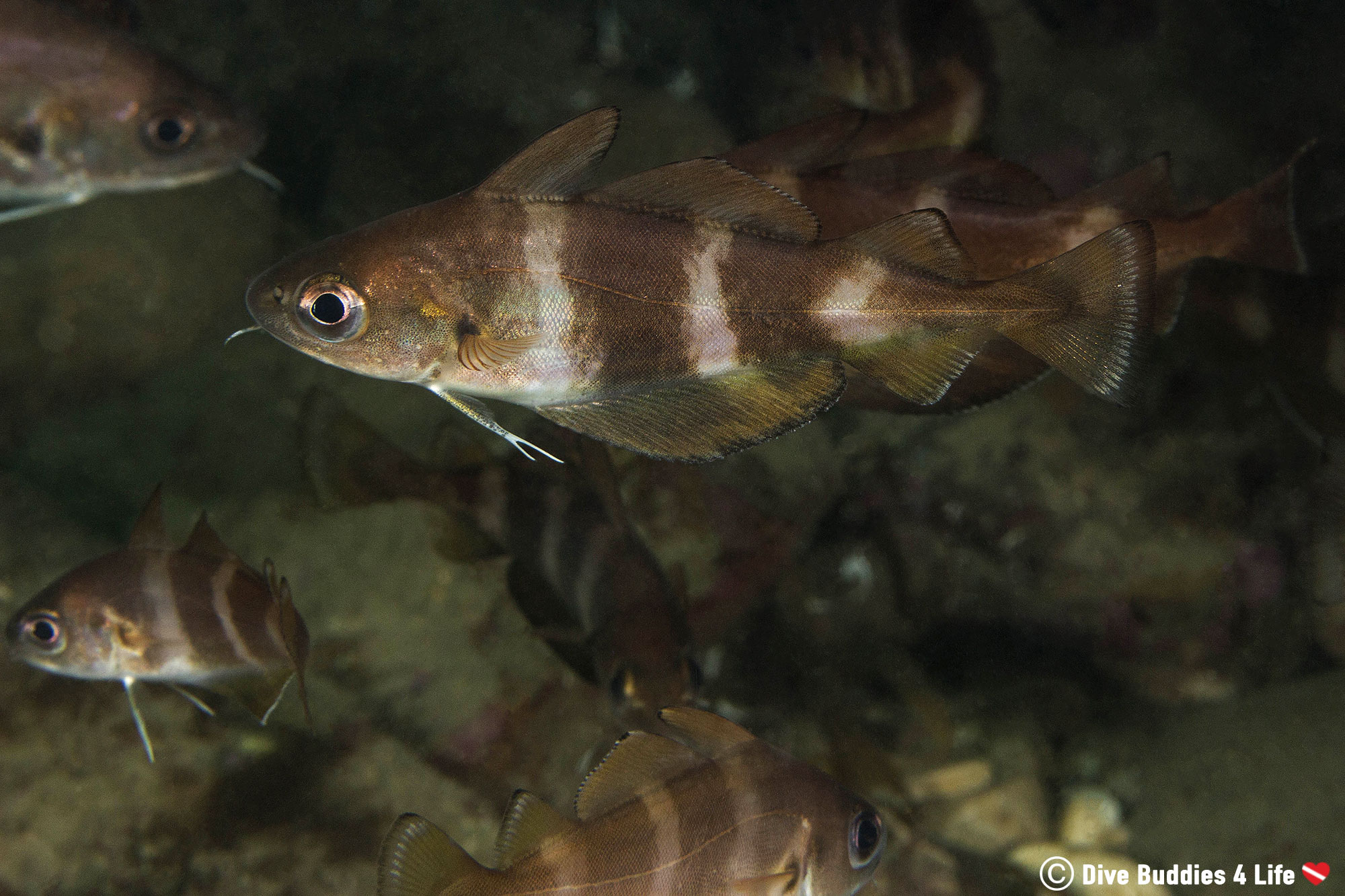 England is a cold water dive destination that doesn’t get enough attention. Few other places in the world can lay claim to having extraordinary inland diving, ocean diving, shore diving, wreck diving and big animal encounters all within the confines of a single country. 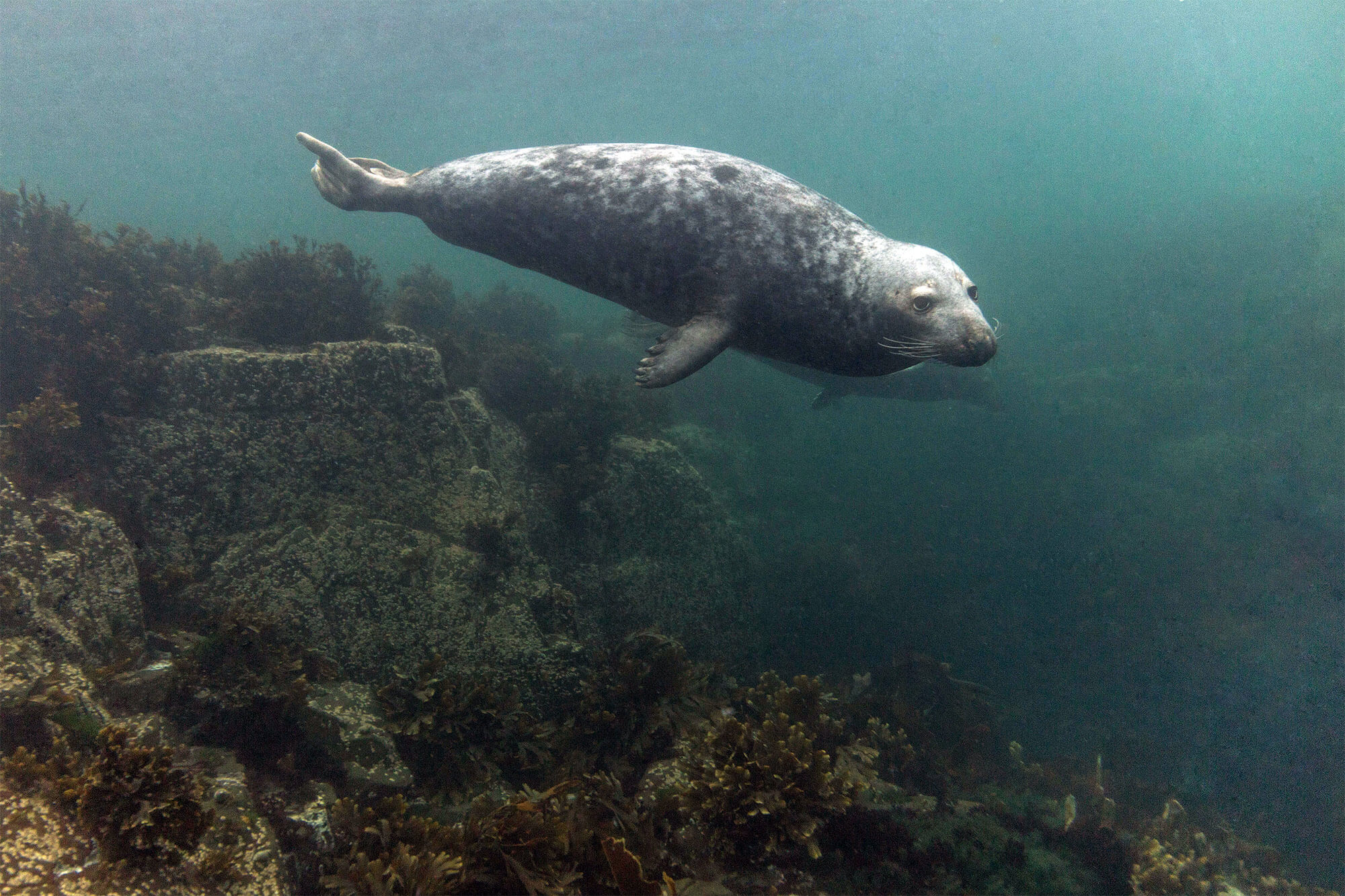 Seal Diving on England’s East Coast: Suit up into your cold water gear and get in the water with some of mother nature’s most playful creatures. Scuba diving the Farne Islands will open your mind and touch your soul as you witness some of the best diving in the United Kingdom.

The Jurassic Coast is a stretch of oceanside coastline framing the south-west region of England. It passes through distinct counties such as Dorset, Devon, Weymouth/Portland and Purbeck offering varied landscapes, iconic towns and seaside villages. Geographically, the coast begins at Orcombe Point in Exmouth and winds for 153 kilometers to Old Harry Rocks near Swanage.

On a global scale, the Jurassic Coast is a hugely diverse and cliff-saturated landscape, known for its incredible geology, fossils and landforms. As a UNESCO World Heritage Site, visitors can understand and explore the planet’s history, evolutions of life and natural processes that have shaped the world across millions of years of time.

The 6.5 kilometers long by 2.5 kilometers wide tied island of Portland marks the southernmost point on the Jurassic Coast. This unique island is isolated and ruggedly beautiful, attached to the mainland by a narrow causeway crossing the English Channel. Surrounding Portland, the nutrient-rich North Atlantic makes not only an interesting undersea environment, but Portland’s locality in the channel means that the sea bed whispers the tales of many sunken wrecks, some dating back to the wars.

Having visited England several years earlier, Joey and I had the opportunity to enjoy a long weekend of diving in Portland. We did a combination of shore and boat dives, to get a good idea of what there was to see in the vicinity! 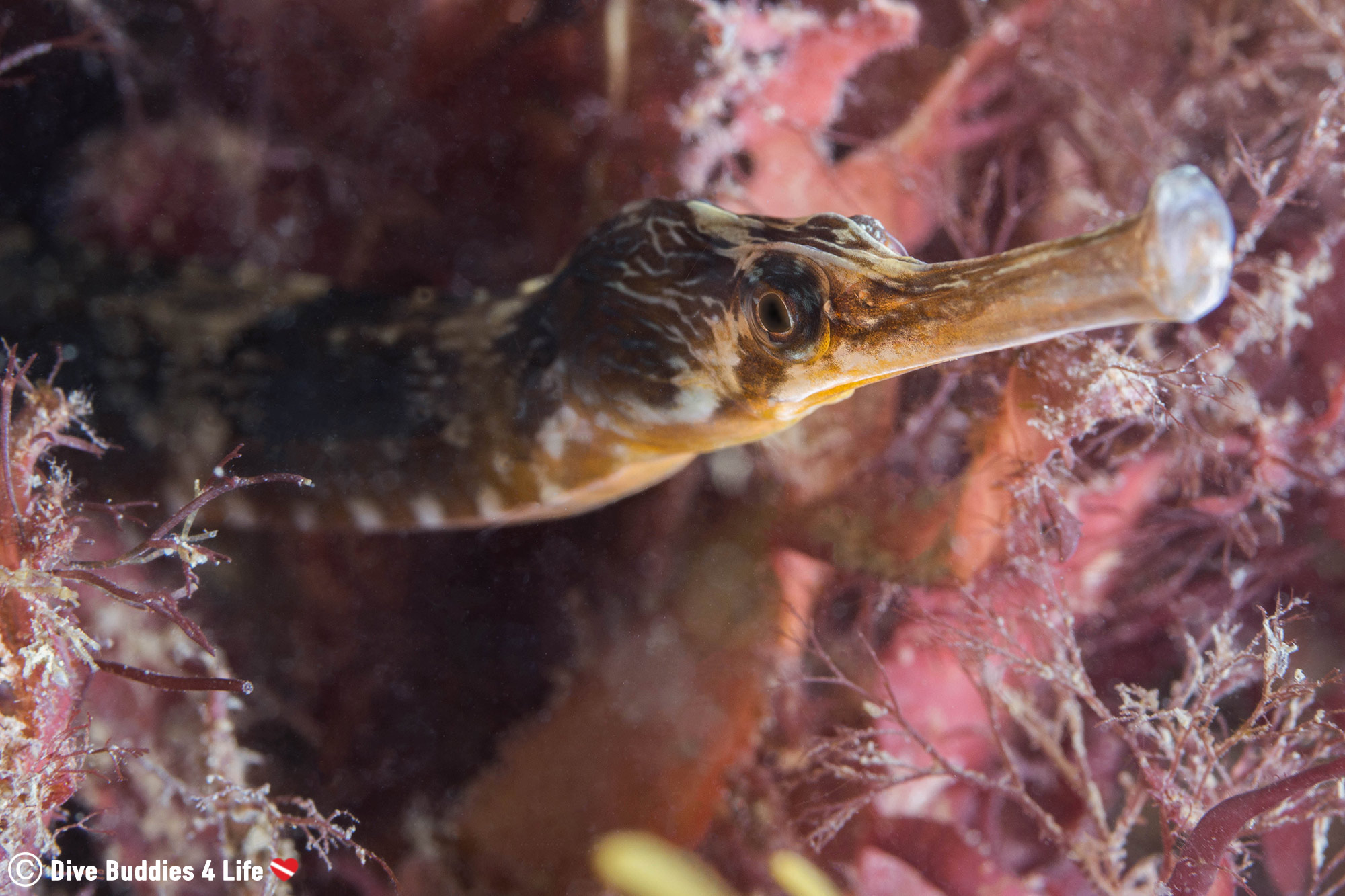 Chesil Cove is part of the 29-kilometer Chesil Beach barrier beach, that joins the island of Portland to mainland England. At the southernmost edge of the beach, the rocks and stones that form Chesil Cove slope steeply down towards the water giving way to a dive site with an abundance of flora and fauna. As one of the most popular south coast shore diving locations, the site’s depths range from 6 to 18 meters making it ideal for all levels of divers.

Joey and I enjoyed two dives at Chesil Cove. Because the site can be dived at any tide level, and currents are generally weak in this bay, our first dive was in the early hours of the morning.

Picking my way down the steep rocky dune, we carefully waded into the water one footstep at a time, near the ramp to the right of the storm gate. Once in the water we put on our fins, did our final preparations and dipped below the rippled surface. Looking out from my spot on the bottom of Chesil Cove, I could see that, while not stupendous, visibility was an average of 6-8 meters. Inflating my BCD so that I hovered like a helicopter on a landing pad I began kicking forward followed closely by my dive buddy Joey. 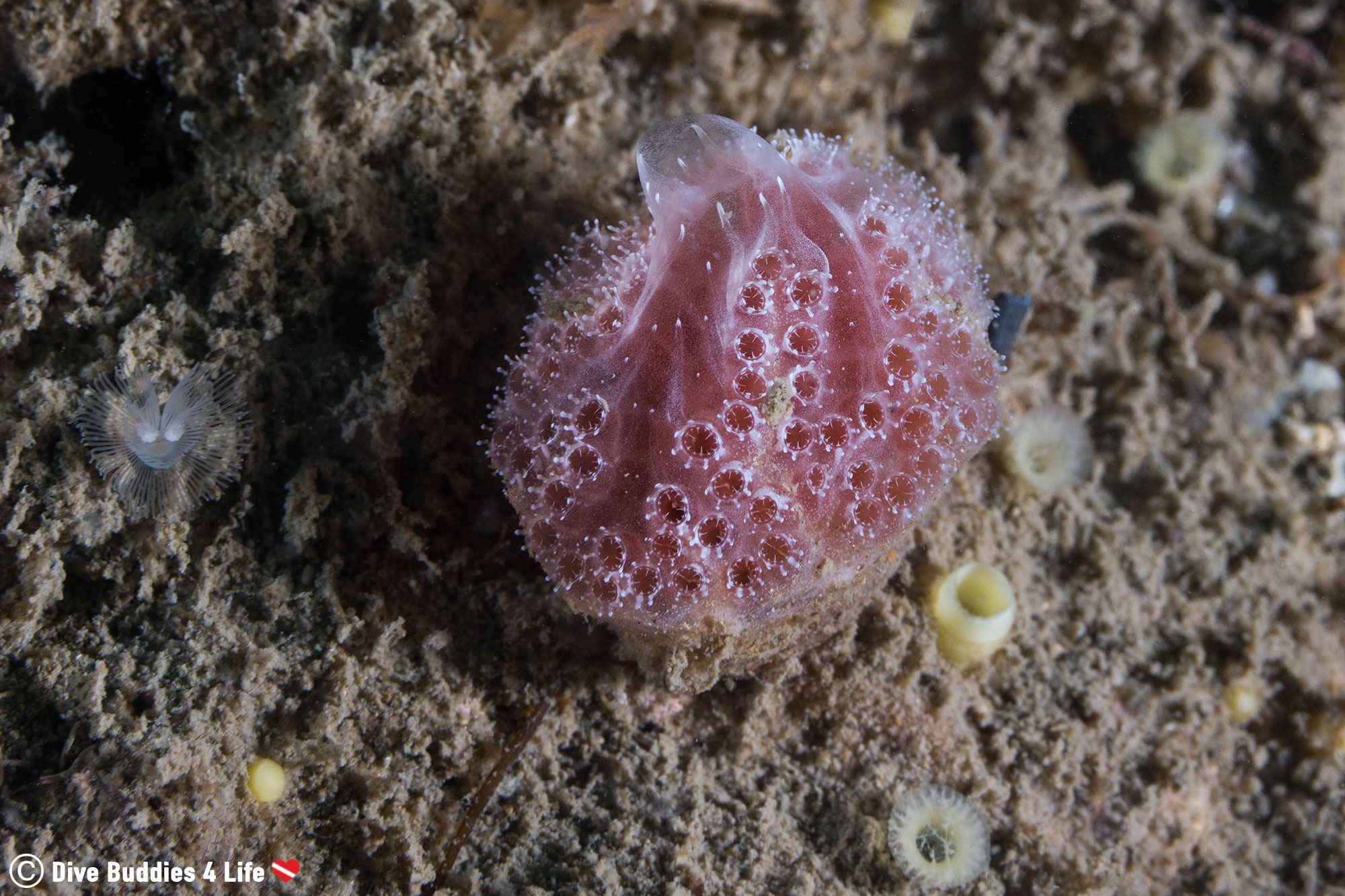 Although Chesil Cover has numerous underwater “trails” that divers can follow, we opted to just dive and see where the wildlife would lead us, which ended up being a large loop. Joey of course kept a close eye on his compass so that we could return to our entry point using the rule of thumb: shore is east and the ocean is west.

The aquascape was expressed by long beds of sand covered in patches of pebbles and rocks. Covering the rocks was a variety of vegetation – some low growing species of rockweeds and other long ribbons of kelp. In the shallows, the vegetation swayed forward and backward as the water lapped the shore, but as we progressed deeper, the plant life became less influenced by the waves. Looking for animal life, I gazed off at the distant sand patches where I saw a collection of small silver baitfish, called sandeels, swimming about the water column. In approaching the sandeels, I only got within several meters before they rapidly dispersed, ducking into the sand at the first hint of an intruder.

Some of our most interesting finds were in the 8-12 meter range where we spotted small pieces of ship wreckage covered in natural life. Hidden amongst the debris were many crabs, anemones, snails. We were even fortunate enough to find a small dogfish, which was a first for us, lounging underneath a fragment of kelp. 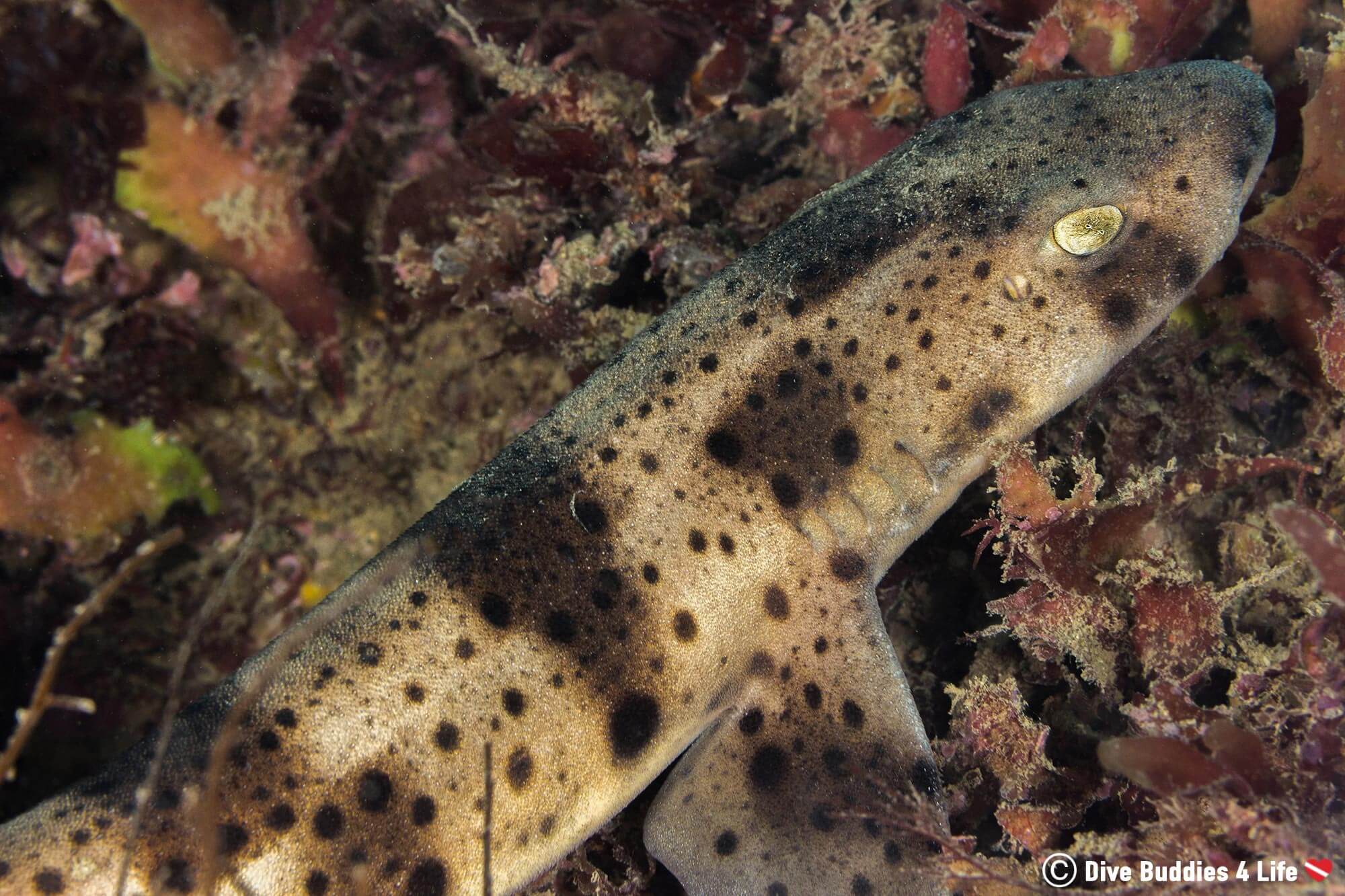 The hardest part of the dive was getting out of the water. I had noticed upon my entry that the beach was steep but, boy oh boy, from the bottom looking up, I felt like I had to scale Mount Everest – IN DIVE GEAR. And my complaints are coming on a relatively calm day. I couldn’t imagine how tricky it would be exiting the water with some swell action. After much huffing and puffing (and a helping hand from Joey) we scaled the beach back to our vehicle for lunch and a tank swap.

Heading back into the water in the afternoon, was much different than our morning dive. Instead of being a lone pair on the beach, we found ourselves amid a crowd of divers all itching for the taste of dry compressed air.

Our second dive unraveled much the same way as the first dive. We followed the wildlife sightings and poked around the plants to find some interesting macro creatures. Again the familiar favourites – crabs, sculpin and snails but also some new ones.

Amid the red algae, we found a few different species of nudibranch. They slugged along the rocks using their rhinophores to scent and taste the environment.

About mid-way through the dive, a frantic pelagic tuna swam across our patch. The small fish was swimming erratically with a hook in its mouth and a long trail of fishing line dragging behind it. Joey had to quickly and tactfully grab the end of the fishing line in order to unhook and free the trapped animal.

How to Find Chesil Cove and What to Look For 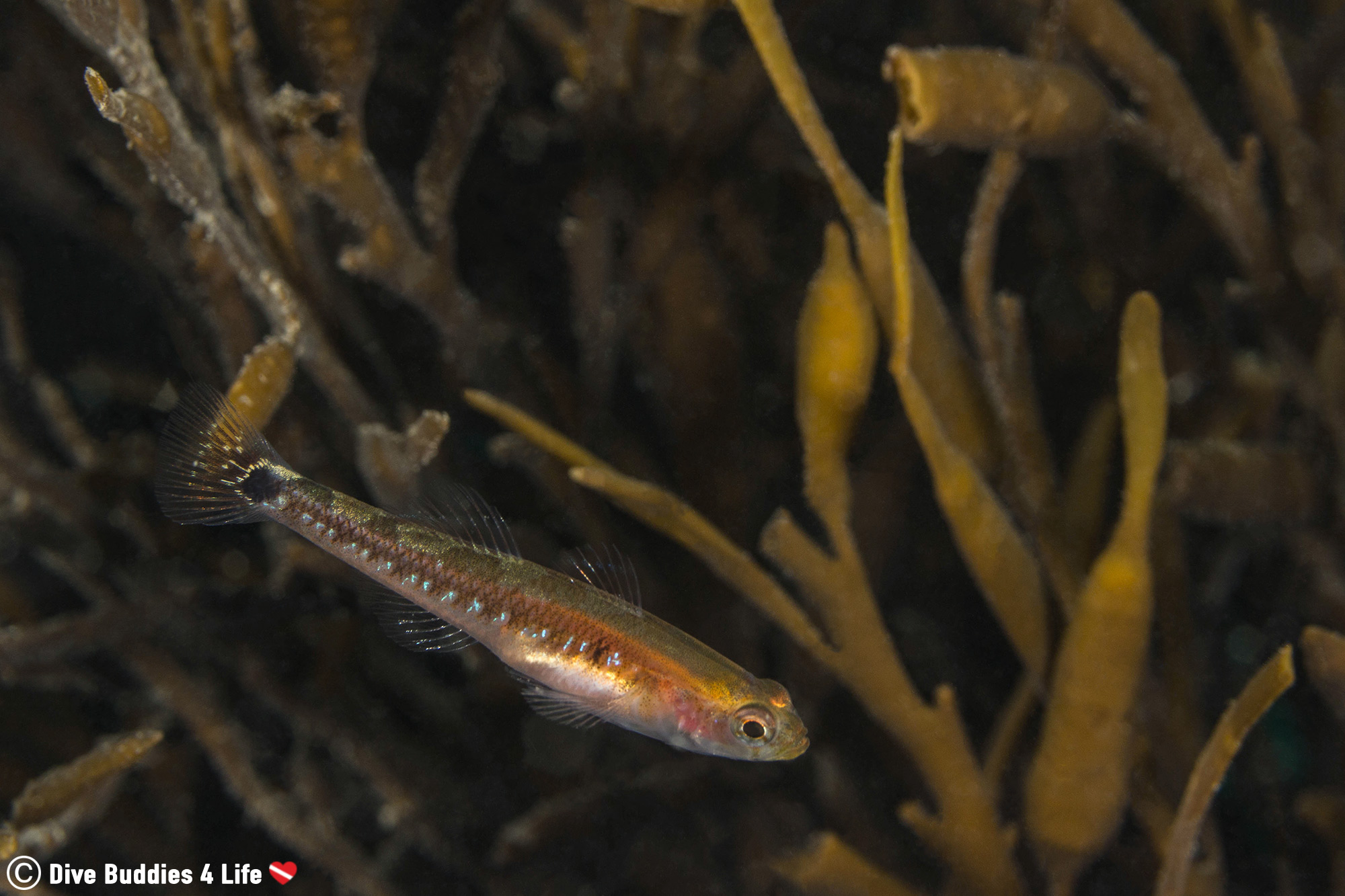 In terms of scuba diving, the Dorset coastline has long been a diver’s paradise not only for shore diving but for deeper channel wrecks, drifts and reefs. From old sailing vessels with precious cargo to relics of WWI and WWII, there is much to be found along this extensive island.

To access the abundance of historic shipwrecks and variety of habitats divers must join a charter to local sites. Portland offers several dive boats and RIB fleets that operate out of two locations; Portland Marina and Castletown. Of the 70+ wrecks and reef sites surrounding Portland, our 2-tank boat diving day was scheduled to take us to the Alex Van Opstal as well as a shallower reef drift.

The Van Opstal is a Belgian passenger liner sunk on September 15th, 1939 by a mine en route to Antwerp. She was an early casualty of World War II sinking just 15 days after the German invasion of Poland.

Descending the dark water to the remains, I could instantly tell she was in rough shape. And this was claimed to be the better-preserved portion of the ship. Reaching the sea bed Joey and I turned our lights on and let the running tide gently move us along the debris field. Following the starboard side, we passed mooring cables, an anchor, pipes, winches and pairs of masts. Being relatively new to the art of wreck diving I found it hard to discern what was what.

Eventually, the wreck became an even bigger rubble field. We followed a trail of scrapes to find the second part of the ship. In this part, it was hard to discern even the shape of the Van Opstal. I was hoping to find at the very least the propeller of the ship, however, I was later told that this had been salvaged.

The second dive was unfortunately not on a wreck, but rather a drift over a spongy reef.

As soon as we hit the water the current whisked Joey and me away. We descended to a comfortable depth where we could follow the bottom and enjoy the weightless feeling-like-you-can-fly sensation. We passed oodles of sponge covered reefs filled with growth and harbouring fish life. While I love a good drift as much as the next person, the speed at which we were cruising by made it hard to take photographs. 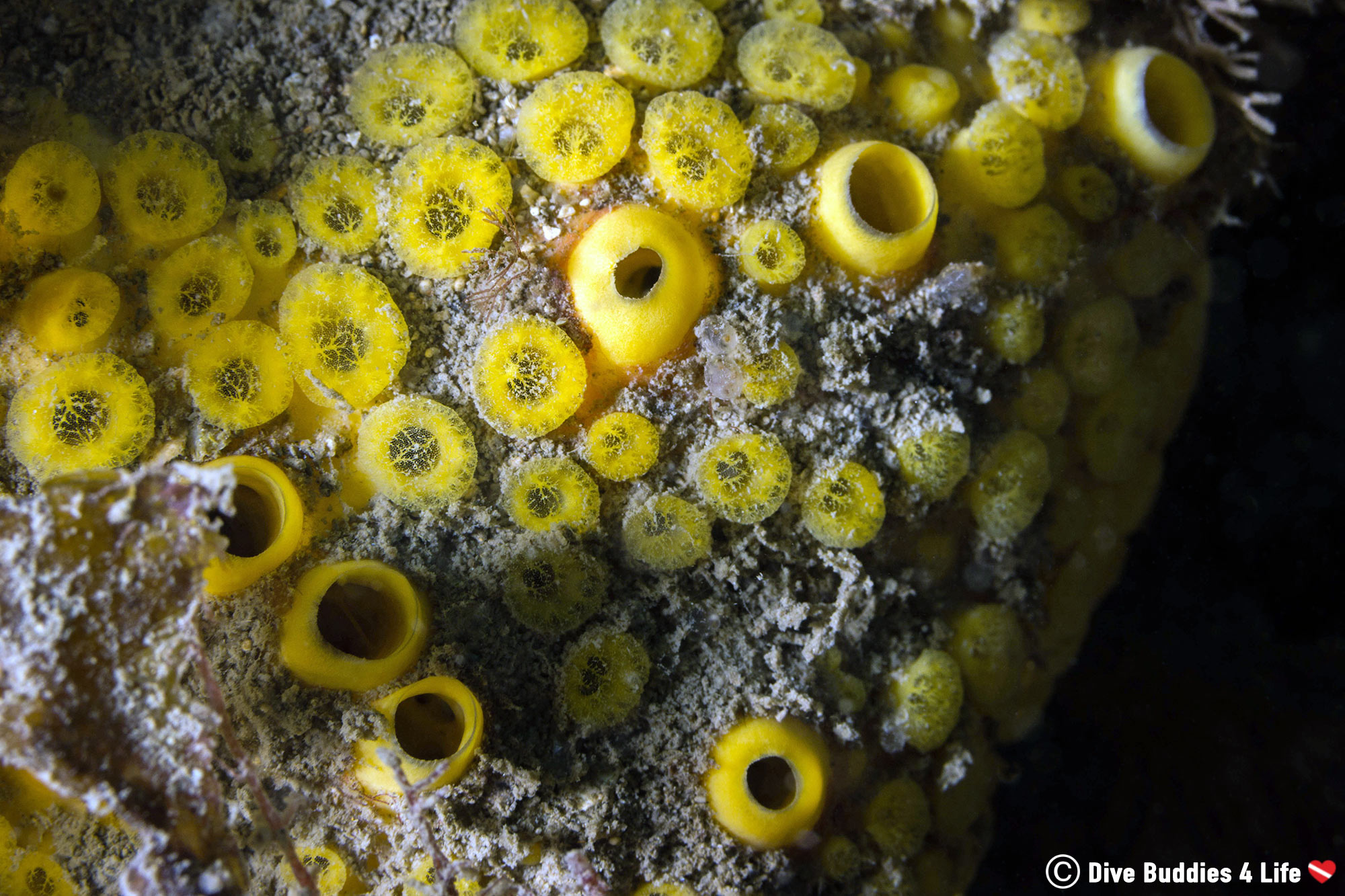 Portland Diving on the Whole

From the moment Joey and I knew we would be traveling to the United Kingdom, I began looking up dive highlights in its encompassing countries. This slice of Europe lives and breaths for cold water scuba divers and the underwater offerings make it one of the most unique places in the world.

Portland’s Jurassic Coast was one of the many diving locations that fell onto our radar as a must-visit and must-dive in England. Thanks to its many antique shipwrecks, Portland is a diving hub, with several dive clubs, shops and outfitters. As you can imagine I had high hopes for this seaside island.

To my chagrin, as much as Portland’s hospitable fishing towns and awe-inspiring scenery took my breath away, below the water I was definitely left feeling a little bland. Diving in England is more expensive than in Canada, and although I don’t mind spending money to dive, our wreck and reef dive charter was not overly amazing. To be frank I wouldn’t visit those particular dive sites again.

I was much more appreciative of Chesil Cove. This was hands down my favourite dive venture, but even here the fish weren’t exactly plentiful, granted we did see our first dogfish. 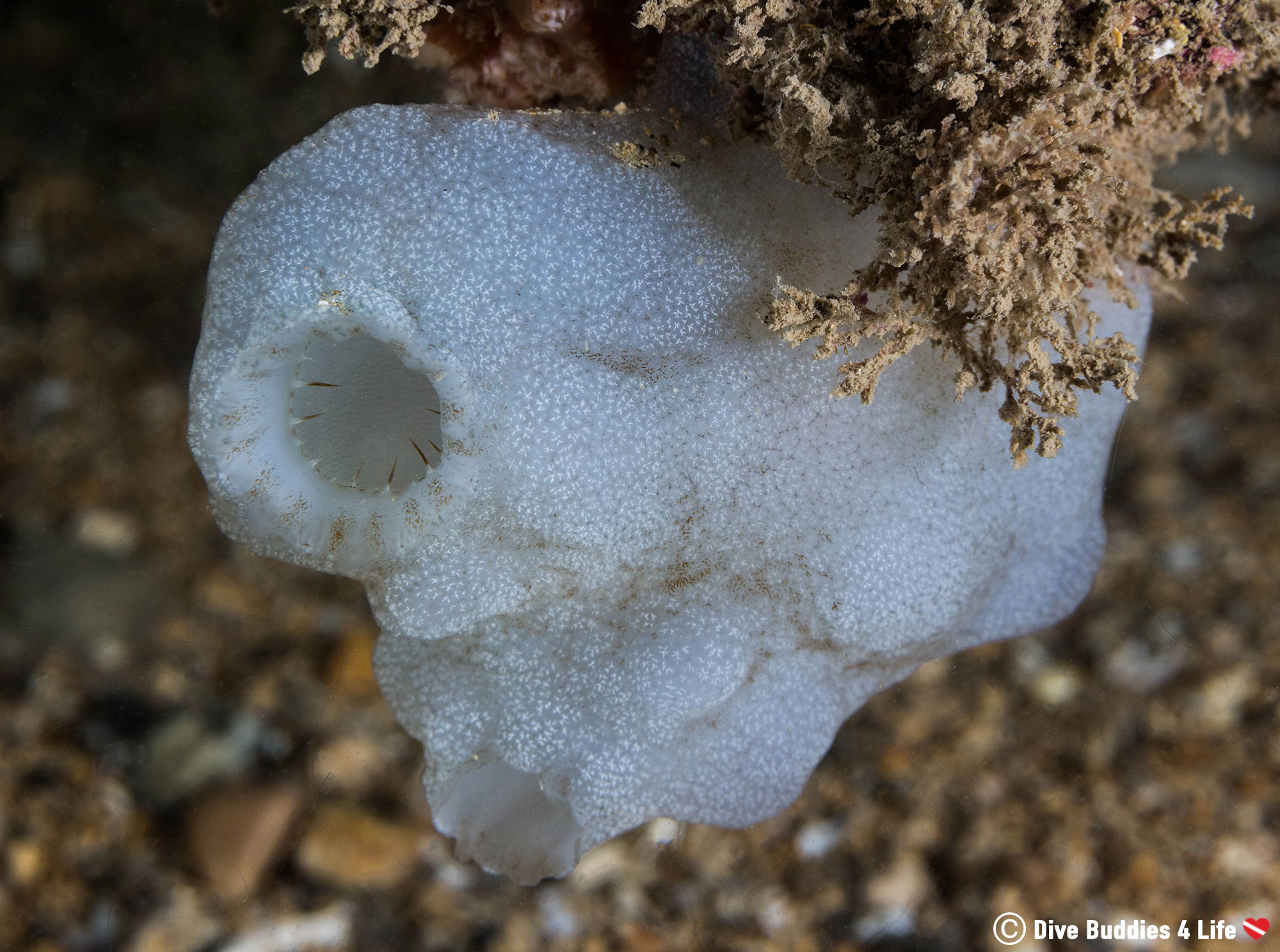 Have you ever looked forward to diving in a specific location and had your hopes and dreams shattered? Where was this lunchbox letdown location? 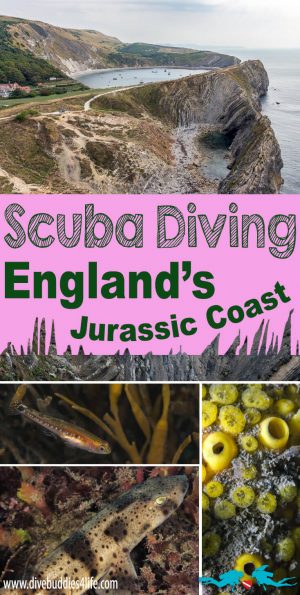