There are a lot of amazing cold-water places to dive around the world — remember Iceland‘s Silfra Fissure? 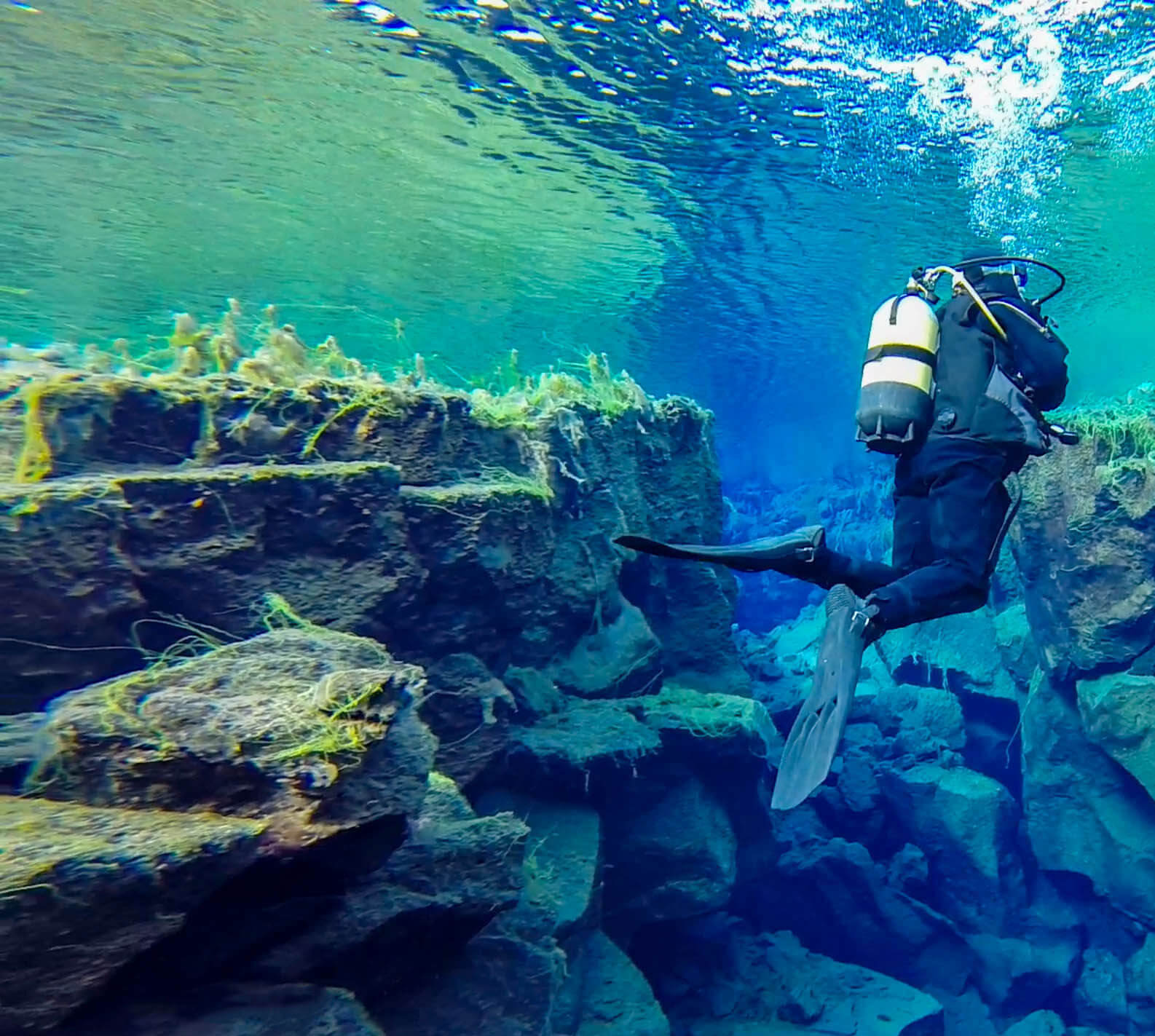 Read More on Scuba Diving the Silfra Fissure in Iceland:
The northern country of Iceland may be close to the Arctic circle, but that doesn’t stop fearless scuba divers from all over the world from submerging between the Silfra’s famous tectonic plates in the coldest and clearest water on the planet.

For British divers and snorkelers, they don’t have to travel far to get a one-of-a-kind in-water experience. The United Kingdom is home to some of the most remarkable cold water diving in the world. Adventure is right in their own backyard.

The United Kingdom is a collection of sovereign countries located off the coast of mainland Europe. These constituent countries are England, Scotland, Wales, and Northern Ireland.

Capped with elegant tea-and-crumpet culture and stunning countrysides, the United Kingdom is a crowd-pleasing travel destination with London as the focal point and Scotland as the natural escape. But this legendary island has more than historic landmarks and medieval turrets.

Surrounding the UK, the dark waters of the European Atlantic are nutrient-rich, making for a highly productive environment chock-full of life. In fact, aside from sharks and whales, some of the biggest things you can find off the coast are scuba divers.

When in England, right? This is what I thought to myself as I booked our Farne Island seal diving trip. While there are many places in the world that are known for their seal encounters, the Farnes Islands, ranks at the top of the list. 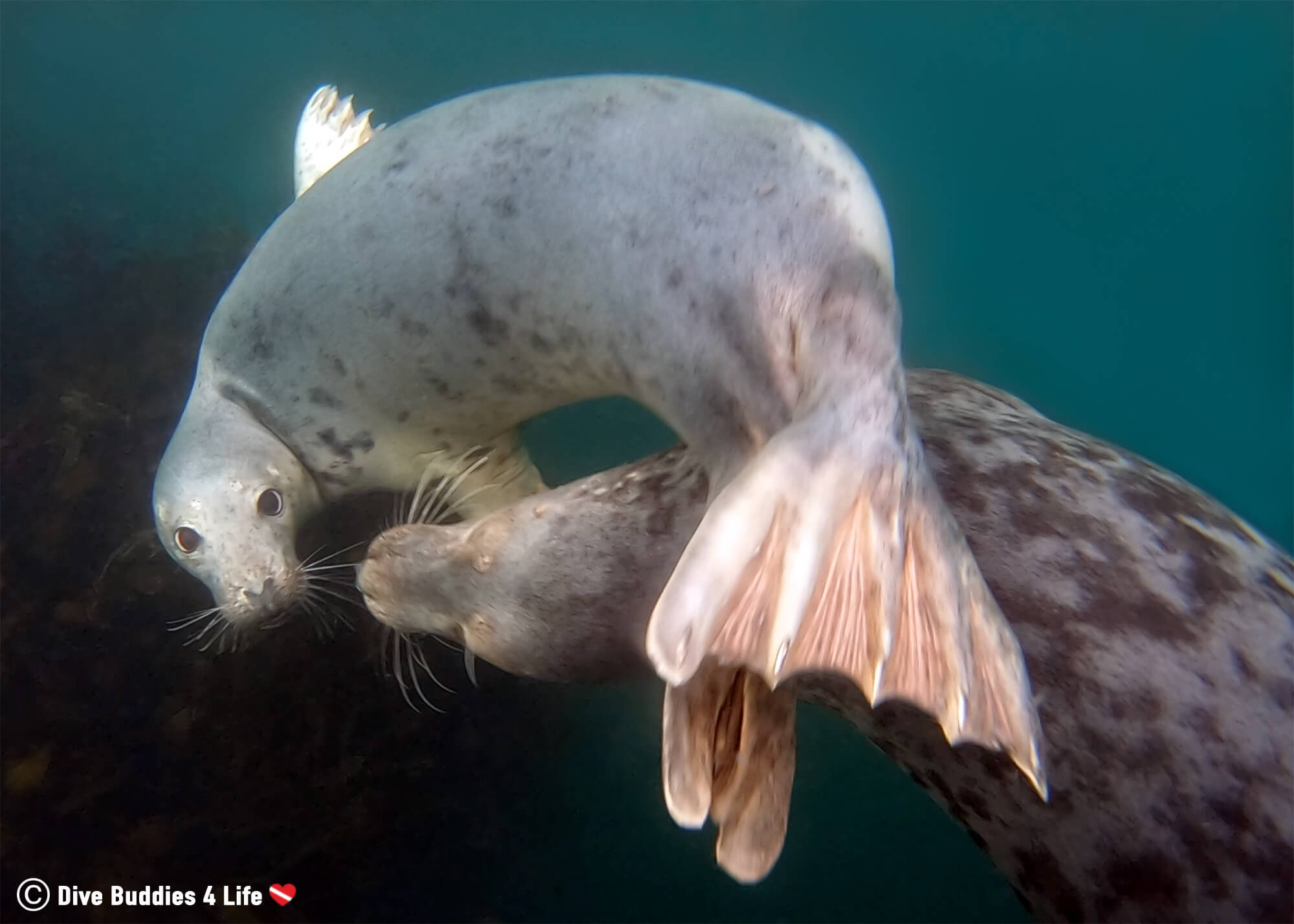 Seals at the Farne Islands

Northumberland is a historic county in the northeast of England just south of the Scottish border. This sparsely populated county is made up of castles and farmland as far as the eye can see. As part of the Northumberland region, the Farne Island archipelago can be found 3-5 kilometers off the coast between Seahouses and Bamburgh municipalities.

Isolated and vulnerable, this collection of 15-20 islands (depending on the level of the tide), is not only the most famous Sea Bird Sanctuary in the British Isles but also has a large colony of seals. The Outer Farnes is considered the less populated of the islands and home to between 3,000 and 4,000 grey seals. This is the second-largest seal colony in the UK. Every Autumn around 1,000 seal pups are born in the Farnes and can be seen sunbathing on the rocks. 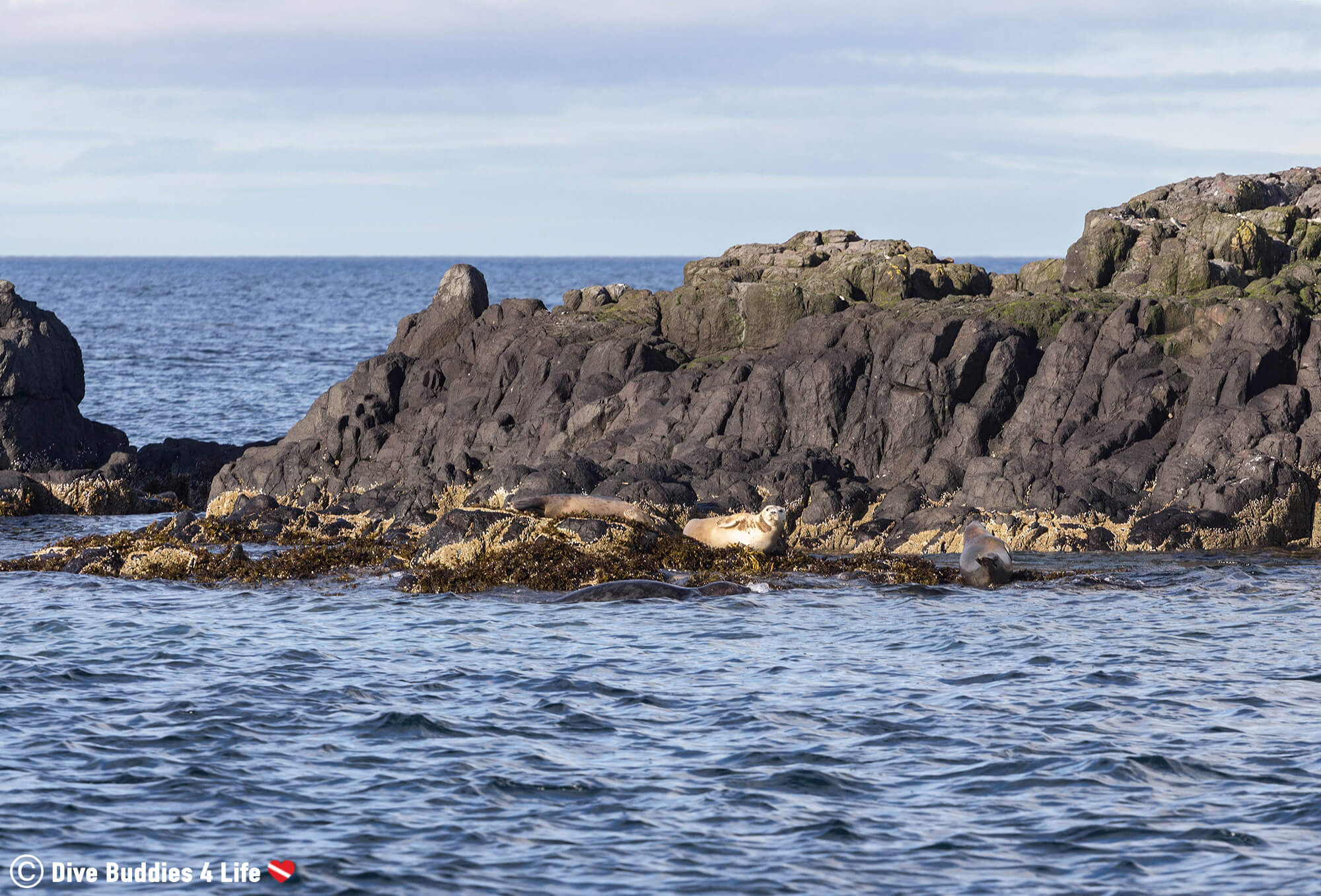 Looking out over the sapphire waves flecked with whitecaps, and the dramatic coastline of the Farne Islands, I could see the occasional black bobbing head of a seal in the chop. The weather was perfect, relatively flat seas and cotton clouds in an otherwise cobalt sky. Terns, fulmars, and guillemots circled the air and water hunting for fish. After a 30-minute boat ride due east of Seahouses sheltered harbor, the Farnes was finally in sight.

Equipment at the ready, I began to don the last pieces of my drysuit and help my husband Joey do the same. We’ve been traveling and diving in Europe for close to two years, and unfortunately, the zipper on Joey’s drysuit has suffered the short end of the stick and we haven’t had the chance to get it repaired. To compensate, he’s packed snug with extra layers of clothes, giving his physique a slight burly appearance. Today we are hoping that the additional clothes and playful seal encounters will help Joey forget the bone-chilling water seeping into his severely leaking drysuit.

When the captain gave the boat the all-clear, divers paired-off and began jumping into the water.

Hitting the ocean, even with a drysuit, the water was indeed cold. It’s the type of cold that makes your head go numb the same way and ice cream gives you brain freeze. I could tell by Joey’s grimace that he was loving the cold as much as me.

Once the initial cold-water brain-freeze had passed Joey and I began to sink. Together we descended using the gentle sloping profile of the island as a reference. At 12 meters (40 feet) we reached a rock and kelp covered bottom, showing about 10 meters (32 feet) of visibility.

The hunt for playful seals had begun!

Unlike what I had expected, the visibility at the Farnes was good, but it wasn’t pristine stretching out as far as the eye could see. Thanks to significant rainfall from the previous few days, there was a thick emerald tint to the water.

Looking through the many shades of green, I began swimming along the side of an anemone covered rock wall. The budding pink and orange anemones appeared like blossoming flowers in a gorgeous underwater garden. Watching a few of the nearby divers I saw them deking in an out of finger-like gullies searching for seals resting on the bottom. I quickly realized that scouting out these small inlets was the best way to find ourselves a seal and began following their lead.

Peering into the first inlet I spied nothing but kelp and crabs. The same was true for the second one.Where were these elusive seals hiding?

Scrunch, scrunch, scrunch. As I’m swimming from inlet to inlet I feel a gentle tugging at my leg. Carefully veering around to see who or what was pulling at my fin I find myself staring into a plankton filled void of water. There is nothing behind me.

Returning my focus onward and forward, I keep following my course. Scrunch, scrunch, scrunch. Again I feel me fin being shaken ever so slightly. Pausing momentarily, I turn around a little quicker this time around, catching sight of the flapping tail of a grey seal gliding away from me. What a crafty animal!

For the rest of this first dive Joey and I found ourselves playing a game of cat and mouse. Every time one of us would turn around in the water the seal that was inconspicuously following us, would try and sneak away before being spotted. Sometimes he would succeed and other times we would catch a fleeting glimpse of the seal darting away. As you can imagine, it made photographing these playful animals a little tricky. You had to be silent and subtle.

Following a surface interval, filled with more bobbing seal heads than I could count, we were back in the cold but productive waters of the Farne Islands.

For our second dive, we decided to stay shallow. As in 6 meters (20 feet) of water or less shallow. Several divers on the boat explained that the seals tended to be less coy and more interactive closer to the surface. And they were right!

In the passing moment after Joey and I descended, we could easily see a flurry of seal activity. They sped below us and to the sides of us. They popped out of holes and jumped out from beneath kelp leaves. Floating in this seal wonderland, I marveled suspended in the water column and watched as a couple of seal flipped and twirled in the waves. These mammals radiated such playful intelligence. 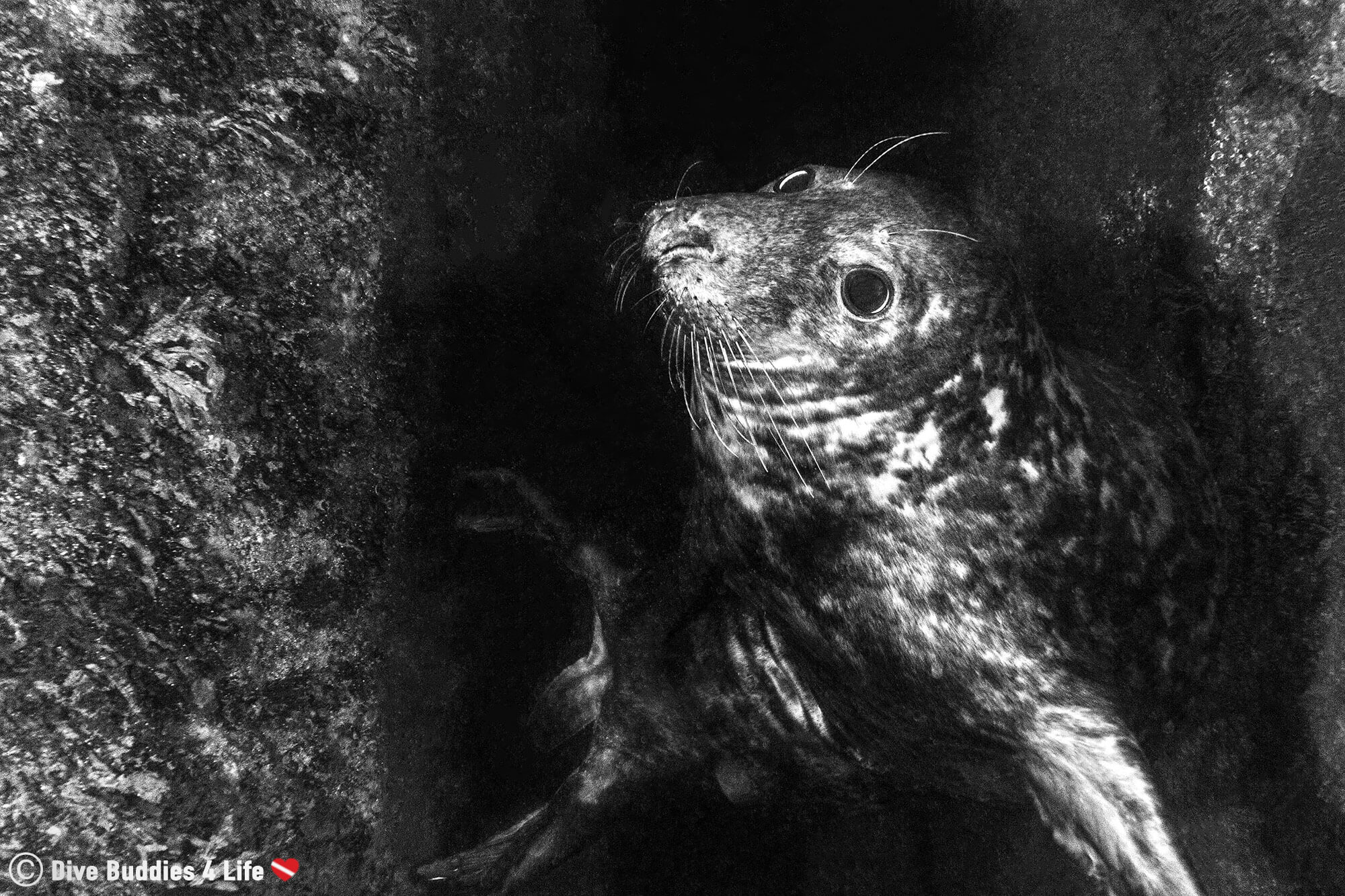 Curious by nature the seals moved in and around us so actively we had no way of keeping track if it was the same seals looping past us several times in a row, or different individuals coming in to see what abnormal sea creatures had invaded their humble abode. As the dive progresses, the seals became accustomed to our presence they moved closer and closer to our person.

One seal even plucked up the courage to approach Joey while he was filming. BOP! In case you were wondering that is what the seal sounded like when he bumped his bristly whiskers on the dome of Joey’s Go Pro and we have the epic pictures to prove it. 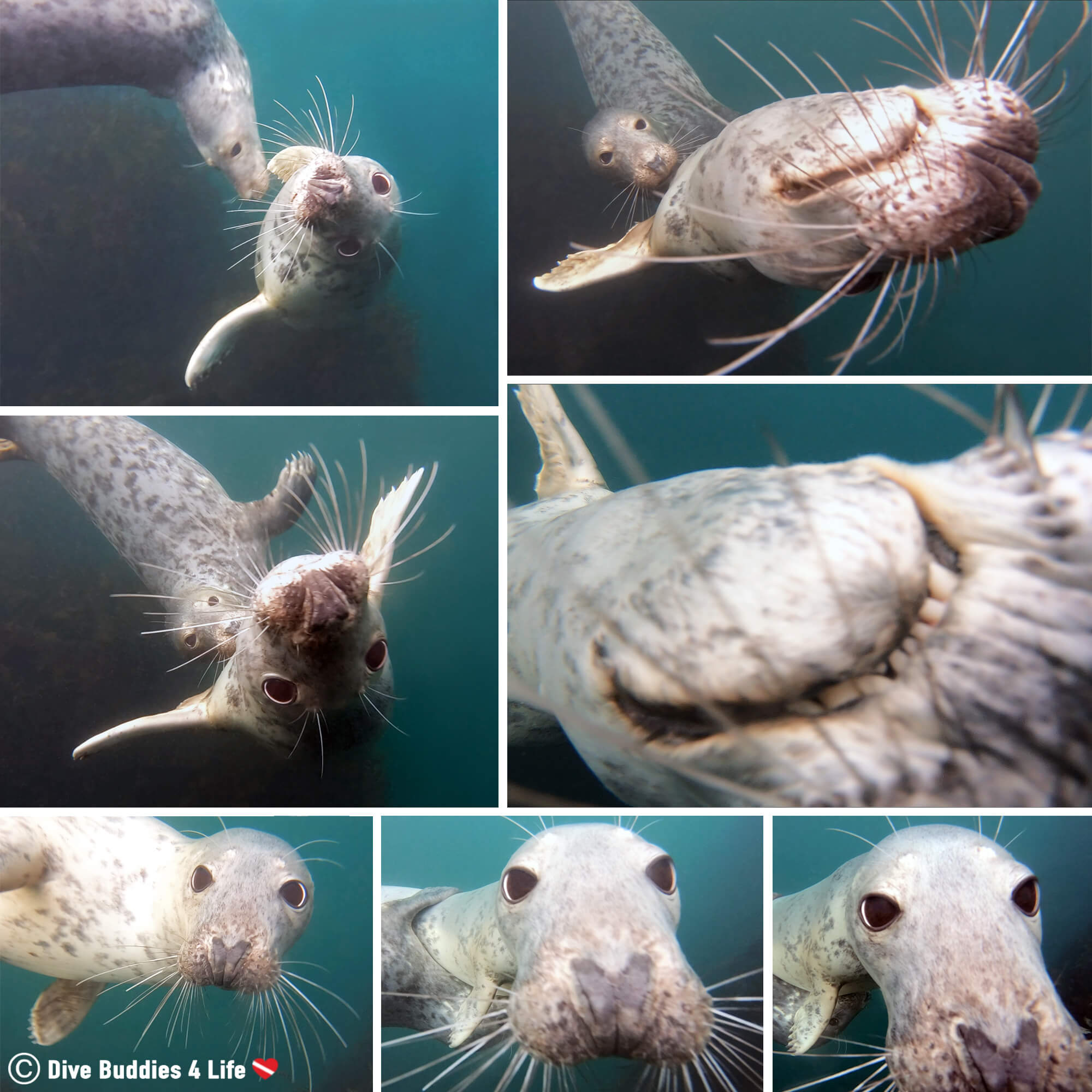 Aside from the seal practically kissing Joey’s Go Pro, the encounter that stole the show for us was a pair of seals dancing – or more likely showing affection – for one another in a shallow gully. Together the two seals would spin and nibble and spin some more, completely engrossed in each other. We watched and floated around in eager anticipation and they eventually swam up to us with their big, glassy puppy eyes.

All too soon we were back on the dive boat, preparing for the trip back to shore and breaking apart our dive gear. All in all we had an epic seal dive and I could hear the hallelujah choruses of this heavenly dive. As for Joey’s leaking drysuit, well let’s just say he didn’t get cold in water however getting back out of a wetsuit topped with a drysuit at the end of the day was even more undignified than it sounds. 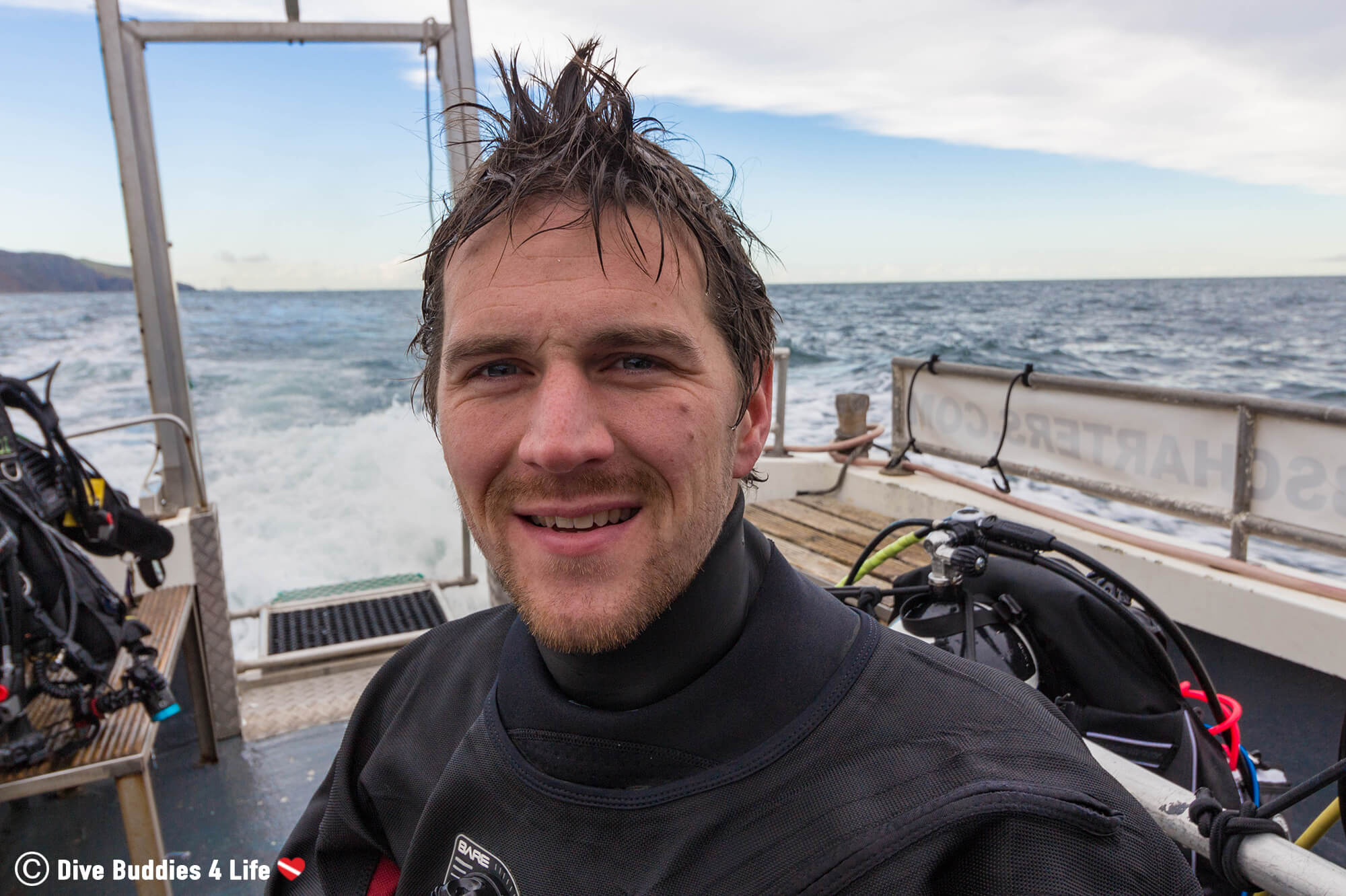 Farne Islands – A Must See for Cold Water Divers

When you live and breath scuba diving, sooner or later you’re going to get the opportunity to dive into some pretty neat spots all over the world. And neat doesn’t even come close to describing our feelings on the Farnes.

The Farne is a small collection of islands tucked inconveniently out of the way, for traveling scuba divers. But rest assured, the trouble and cost of getting to this region of northern England are fully outweighed by the epicness of this dive.

We would absolutely recommend taking a trip to this part of England for a dive, after all, there are only a handful of places in the world where you get the chance for up-close encounters with seals.

Have you ever been scuba diving or snorkelling with playful seals? Where did you enjoy this heart-warming experience? 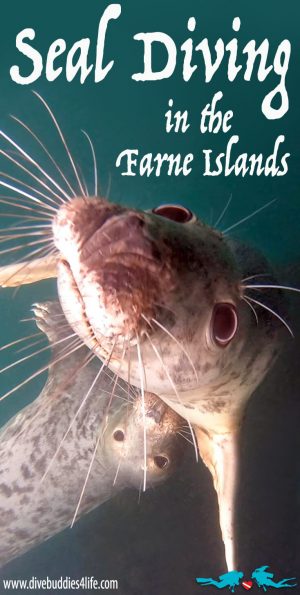