When we drove into the United Kingdom, I definitely expected, at some point during our stay, that we would get to see and ride the classic red double-decker bus Britain is so well known for. What I didn’t expect, was to get the opportunity to DIVE one of these iconic buses at the bottom of a quarry.

I mean how fitting is that. 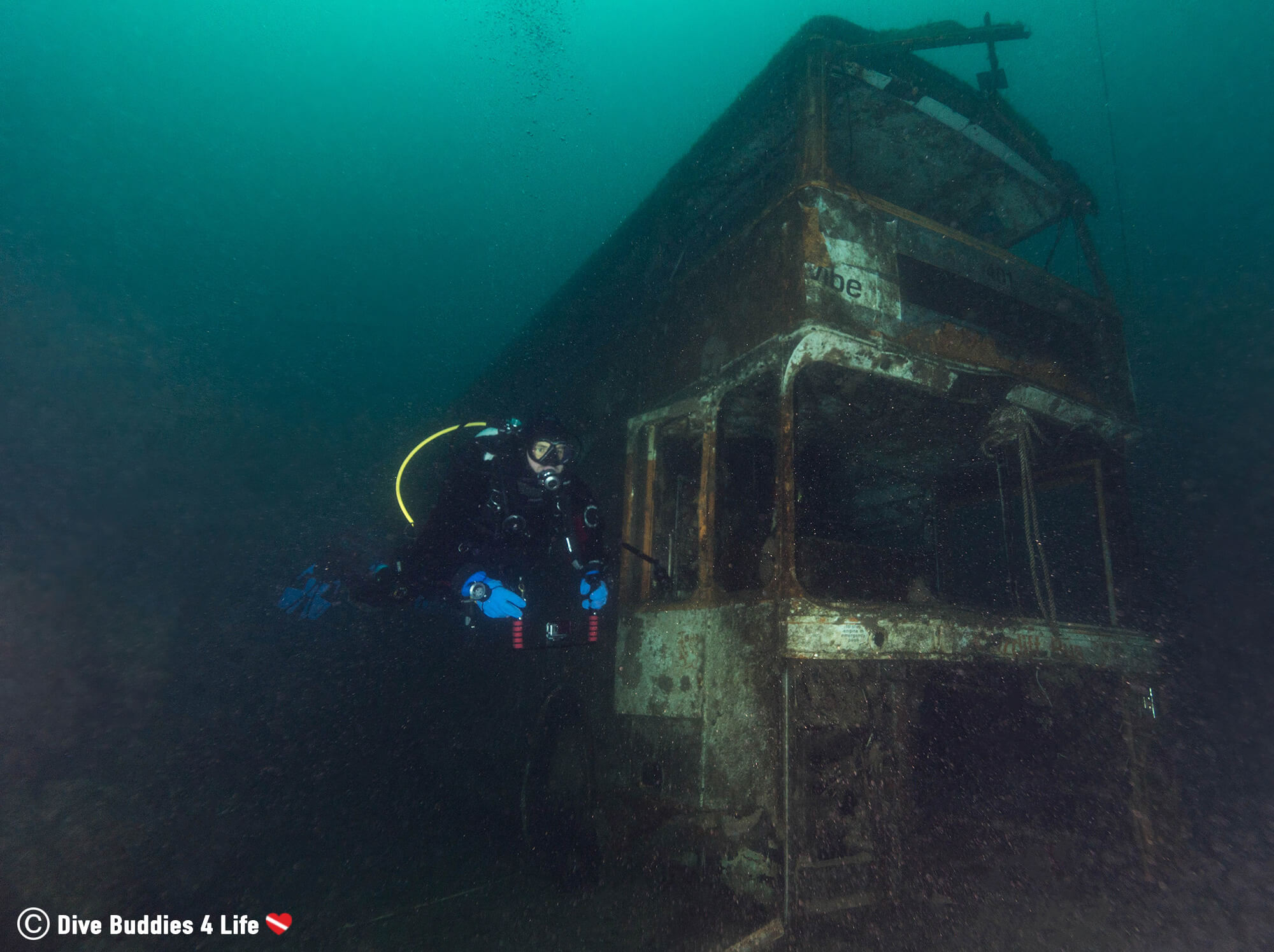 Inland Diving in the UK

Before coming to the UK, the ocean has always been Joey and my primary go-to diving location. I had never really experienced diving in such a contained and isolated body of water, nor did I realized what I was missing out on.

Freshwater quarries are sensational places. When diving in them, you don’t need to worry about the tides, the currents or open water waves crashing into your body as you struggle to put on scuba gear.

They are the perfect training grounds for rookie divers to learn the art of scuba diving, for trying out new equipment and of course for less frequent divers to grease off those rusty ol’ skills.

And that’s not even mentioning some of the insanely cool things that have been sunk in quarries for diver entertainment. 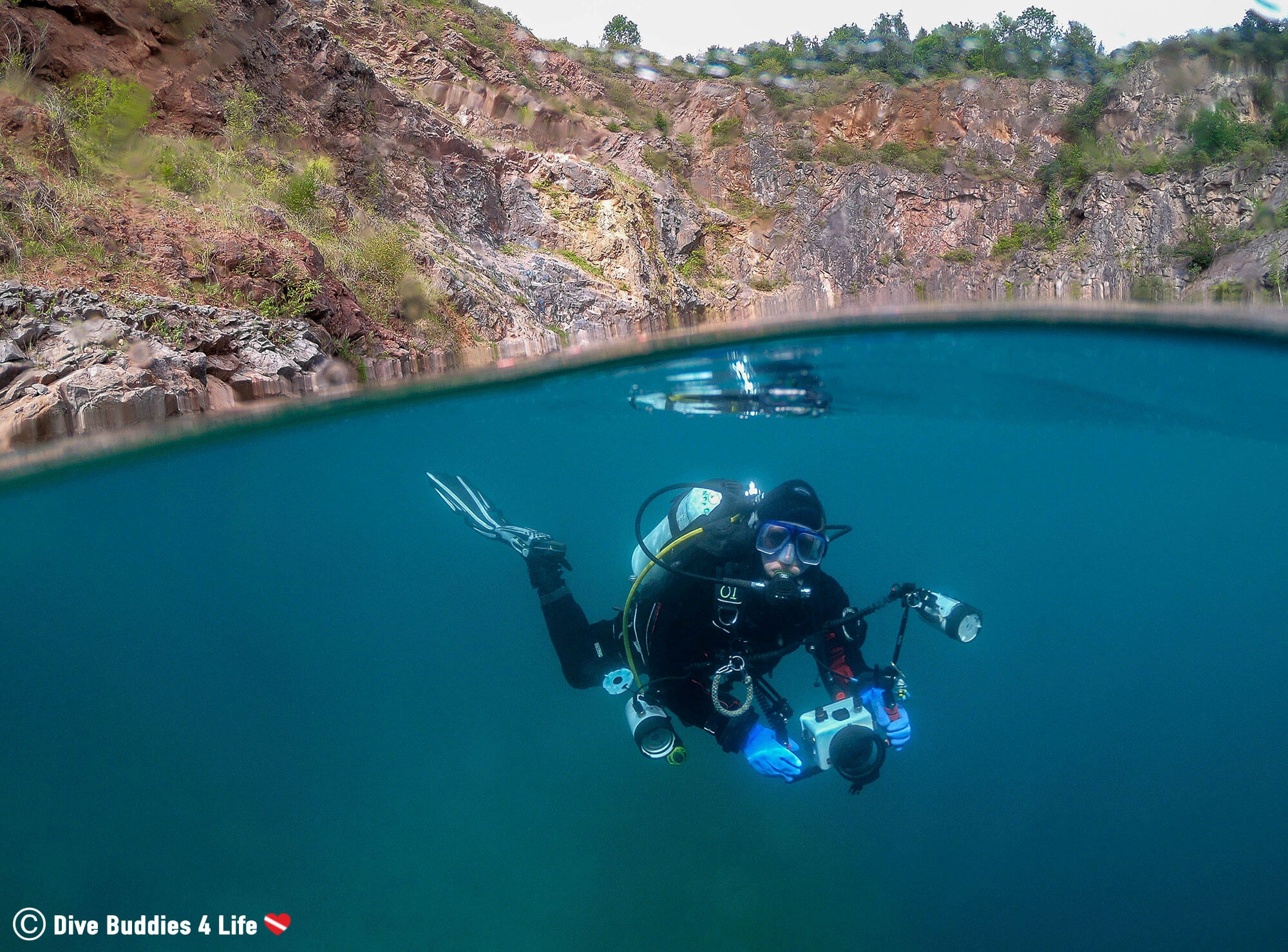 Dayhouse Quarry is a brilliantly clear dolomite quarry found on the cusp of the Wales-England border. The site is often referred to as Chepstow Quarry because of its neighboring Chepstow township nestled along the Wye River in between the Wye Valley and Forest of Dean.

This spectacular freshwater quarry dates back to 1938 when it was first marked on the map. The rocks in the Dayhouse Quarry formed 340 million years ago during the early part of the Carboniferous Period.

Interesting Information: Dolomitisation is a chemical reaction that occurs within limestone which involves the replacement of some calcium with magnesium to form the mineral “dolomite”

In the late 1990s, the quarrying ceased at Dayhouse and in 2005 the National Diving Academy took on the development of the site.

Now Dayhouse doubles not only as a dive site but also as a big activity center for many water-based sports. In the heat of the summer months, the quarry attracts swimmers, free divers, paddleboarders, fly borders, bungee jumpers, kayakers, zipliners, and many other water-loving enthusiasts. Every year around 10,000 divers visit this site.

When I first found out about Chepstow Quarry and all its freshwater wonders, I was beyond ecstatic. I mean how many places can you go diving with the intention of seeing a plan, a chopper, some army tanks, and a double-decker bus all in the same day. 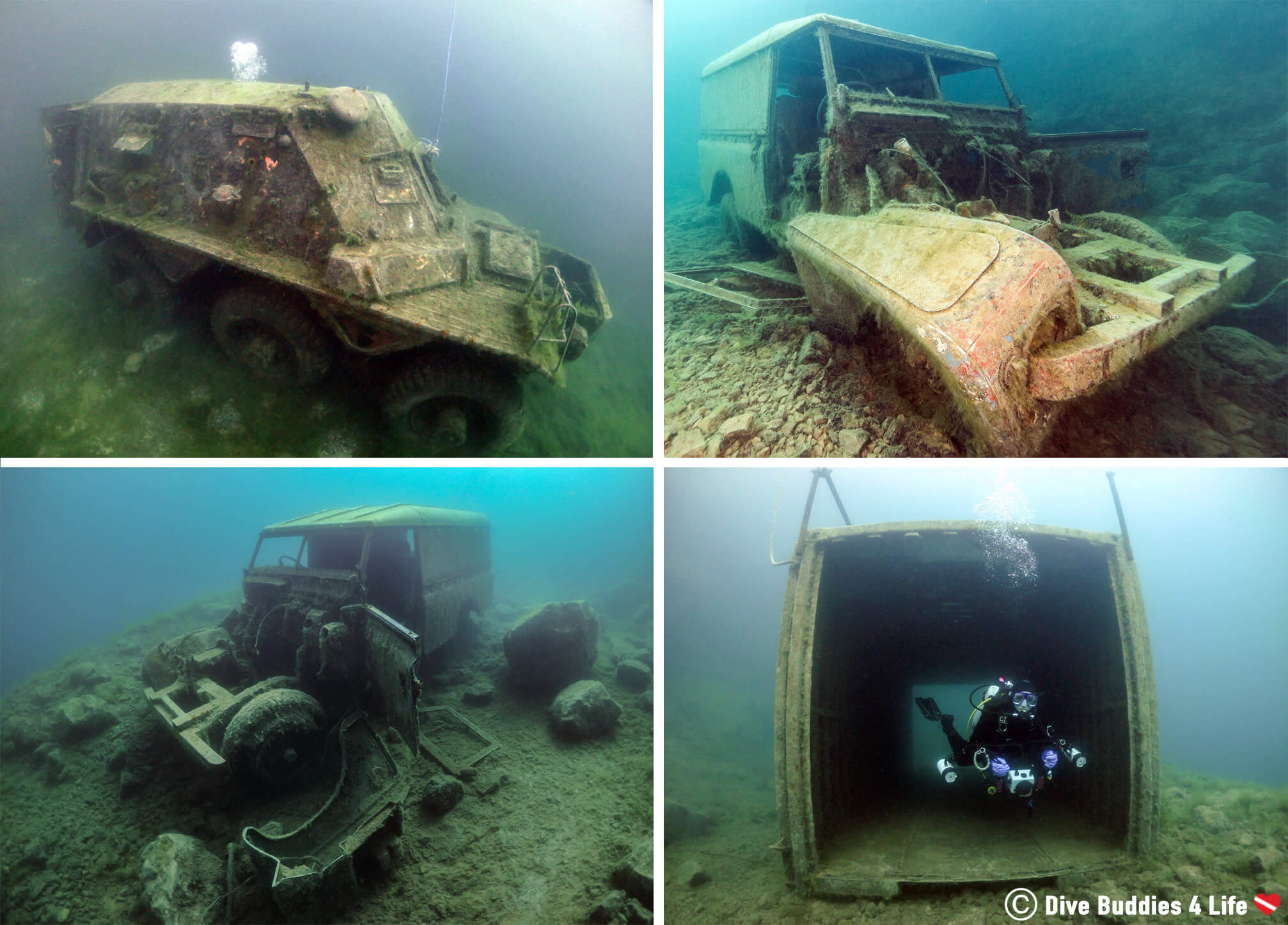 For optimal underwater conditions, Joey and I decided to avoid diving the quarry on the weekend (and the busy crowds they incur). Instead, we visit Chepstow bright and early on a Thursday morning. Suffice to say we were very pleased with the handful of divers that turned up and basically had the place almost entirely to ourselves.

Once we’d taken care of paperwork and equipment rentals in the dive shop, we assembled our gear and hopped in the shuttle van that was paid for in our 18£ day admission price.

Because Dayhouse Quarry is a blown out limestone pit with steep cliff walls encircling the reservoir, the dive facilities are not built right at the water’s edge. Instead, to get to the scuba diving entry point, divers must take a shuttle van, that runs all day, transporting people up and down the steep quarry embankment, to and from the docks.

After having been there myself all I can say is, thank goodness for the shuttle van, it would have been a pretty exhausting and strenuous hike without it! 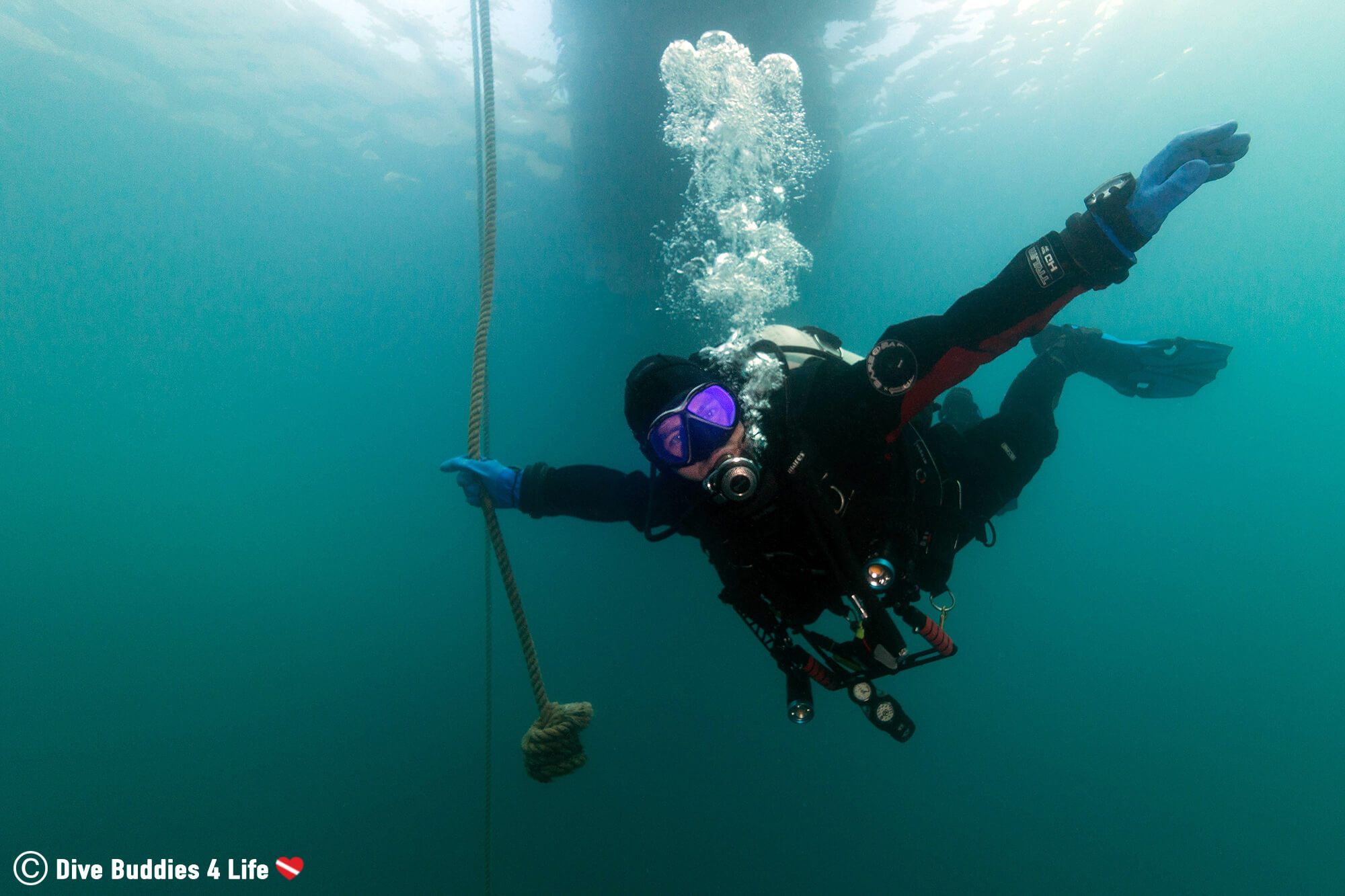 Following our shuttle ride down to the water, Joey and I did our final checks before giant striding in. Our first stop – a Royal Navy Wessex helicopter Mk3!

One of the very practical things at Chepstow Quarry is that most of their sunken attractions have tethered lines and numbered buoys. These numbers correspond to a displayed map of the area found in the dive center. It makes it very handy for deciding what attraction you want to dive and easily locating them amid the jungle of toys found at the bottom. 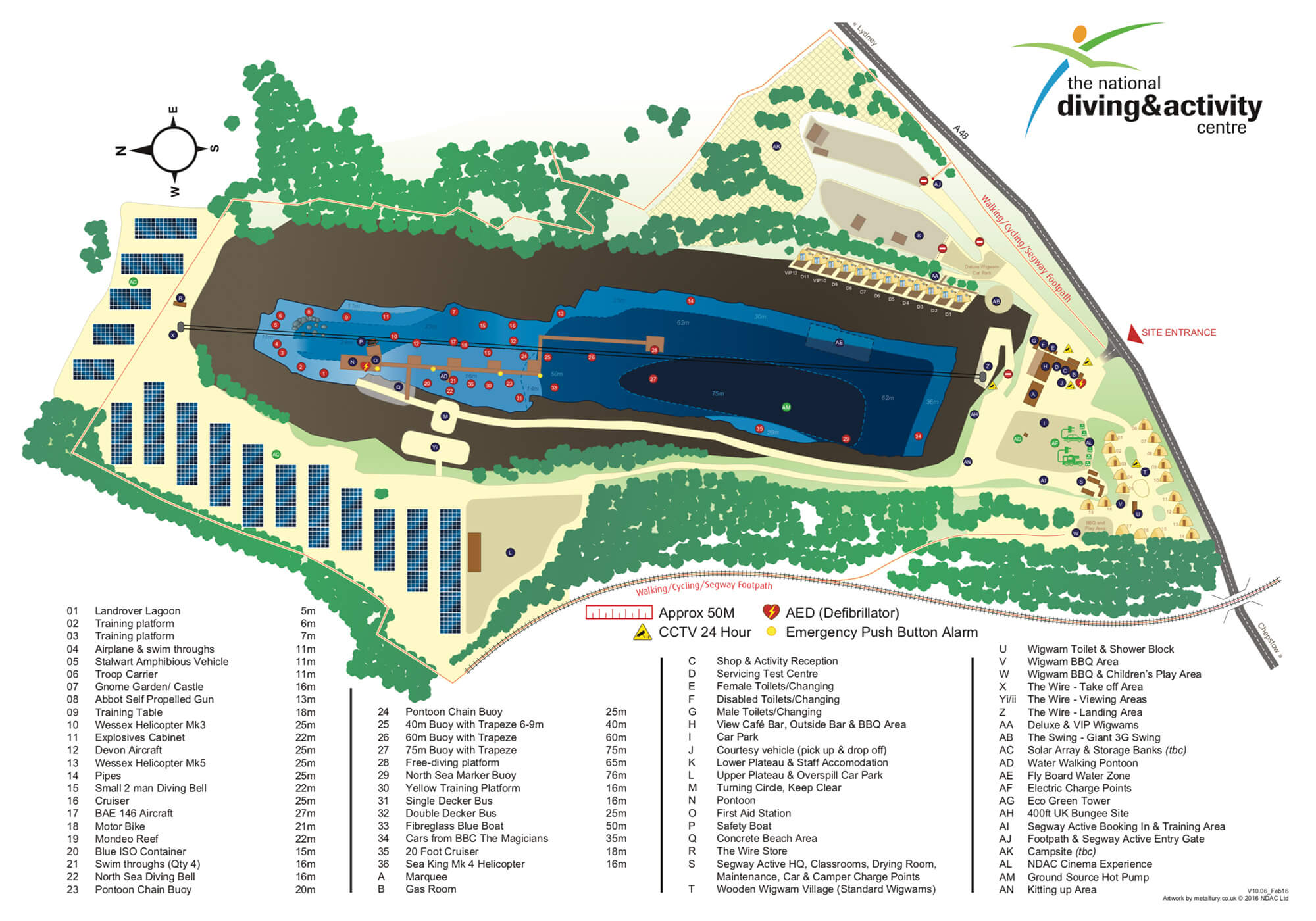 Using the surface buoy and following the rope into the blue, we wasted no time bottoming out right on top of the blade-less Royal Navy Wessex chopper. Resting at a depth of 20 meters (66 feet) this metallic wonder gave us our first photo opportunity. 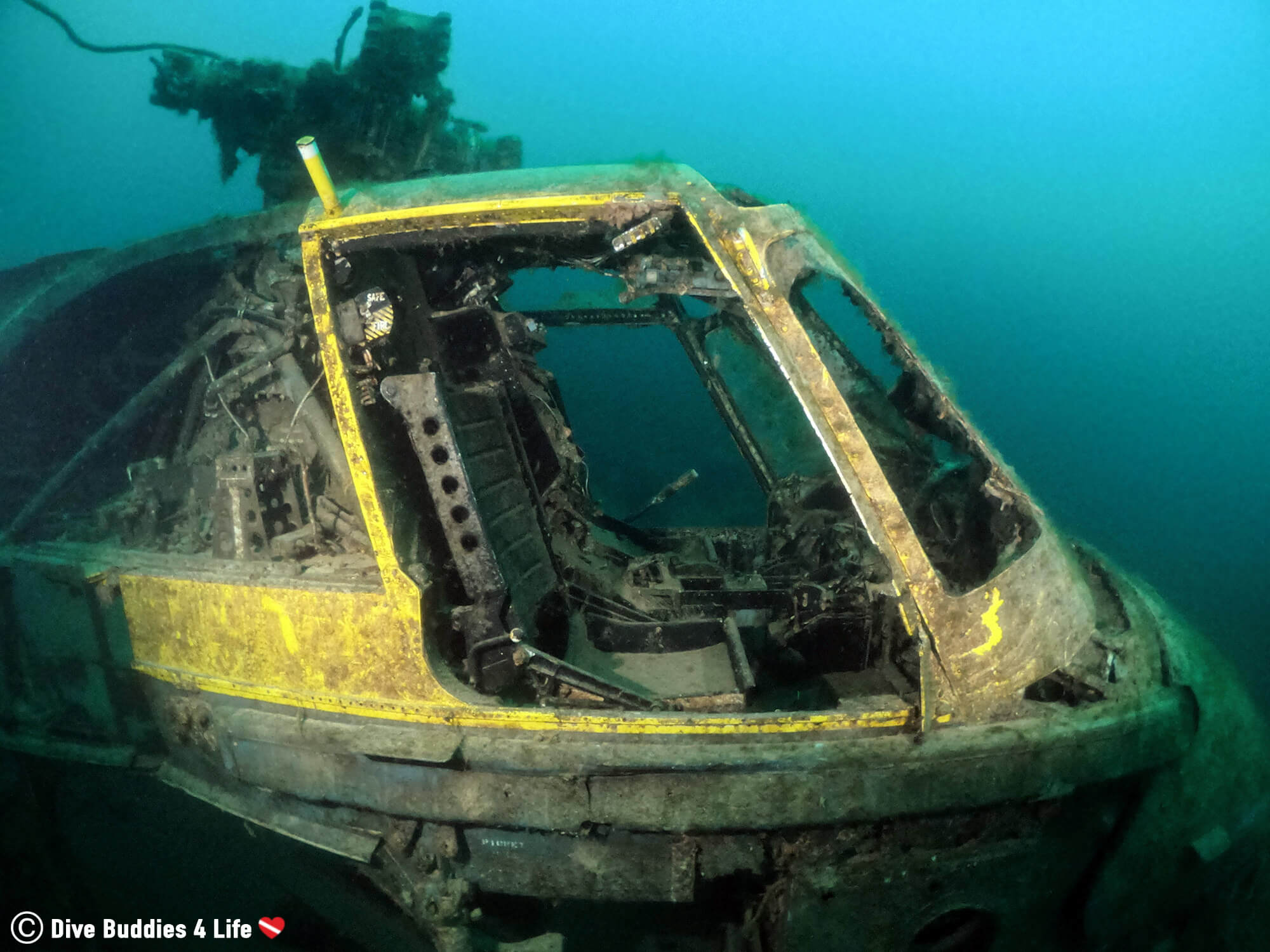 I must admit for being a helicopter the Wessex looked an awful lot like a rusty old tin can coated in slimy green algae. Neither Joey or I had ever dove with a chopper before, and at first glance, I wasn’t even sure that’s what it really was. Having been sunk back in 2007, I could see that the years had definitely made their mark on the weathered the frame.

Together we encircled the outer shell, and each took a turn poking our heads inside to the pilots quarters. On the interior, we could see the many gizmos and gadgets on the control panel. I’ve never flown a helicopter before, but there seemed to be a whole lot of switches and buttons to worry about. 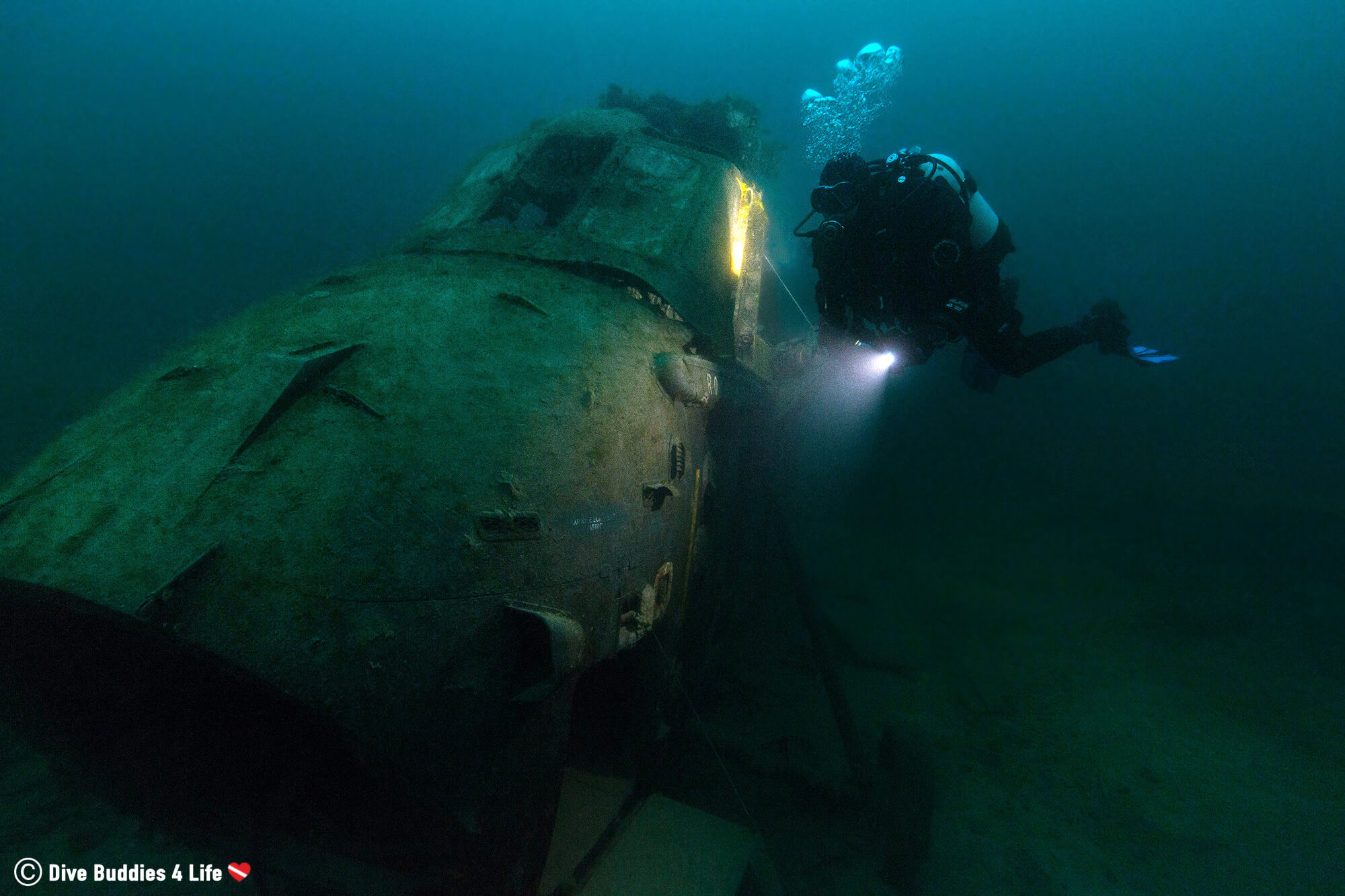 We wasted about one-third of our bottom time investigating the Royal Navy Wessex helicopter before moving on to the next attraction.

The tropical blue of this freshwater quarry became darker and murkier the farther down we went. It wasn’t long before Joey, and I had both our lights blazing, illuminating the muddy bottom as we searched for the much-anticipated double-decker bus.

Great bubbles escaped the sides of my regulator when suddenly the bus appeared. It’s always the same underwater; objects even ones as gigantic as this bus seem to loom out of nowhere, almost in a startling manner.

Being careful not to stir up the bottom Joey did a little swim through of the top and bottom deck which even had the intact spiral staircase connecting both levels. While I watched on, I could all but hear myself quoting Mrs. Frizzle’s famous “seatbelts everyone” line. Trust me when I say – if I had been topside, there would be some serious Magic School Bus theme song going on. 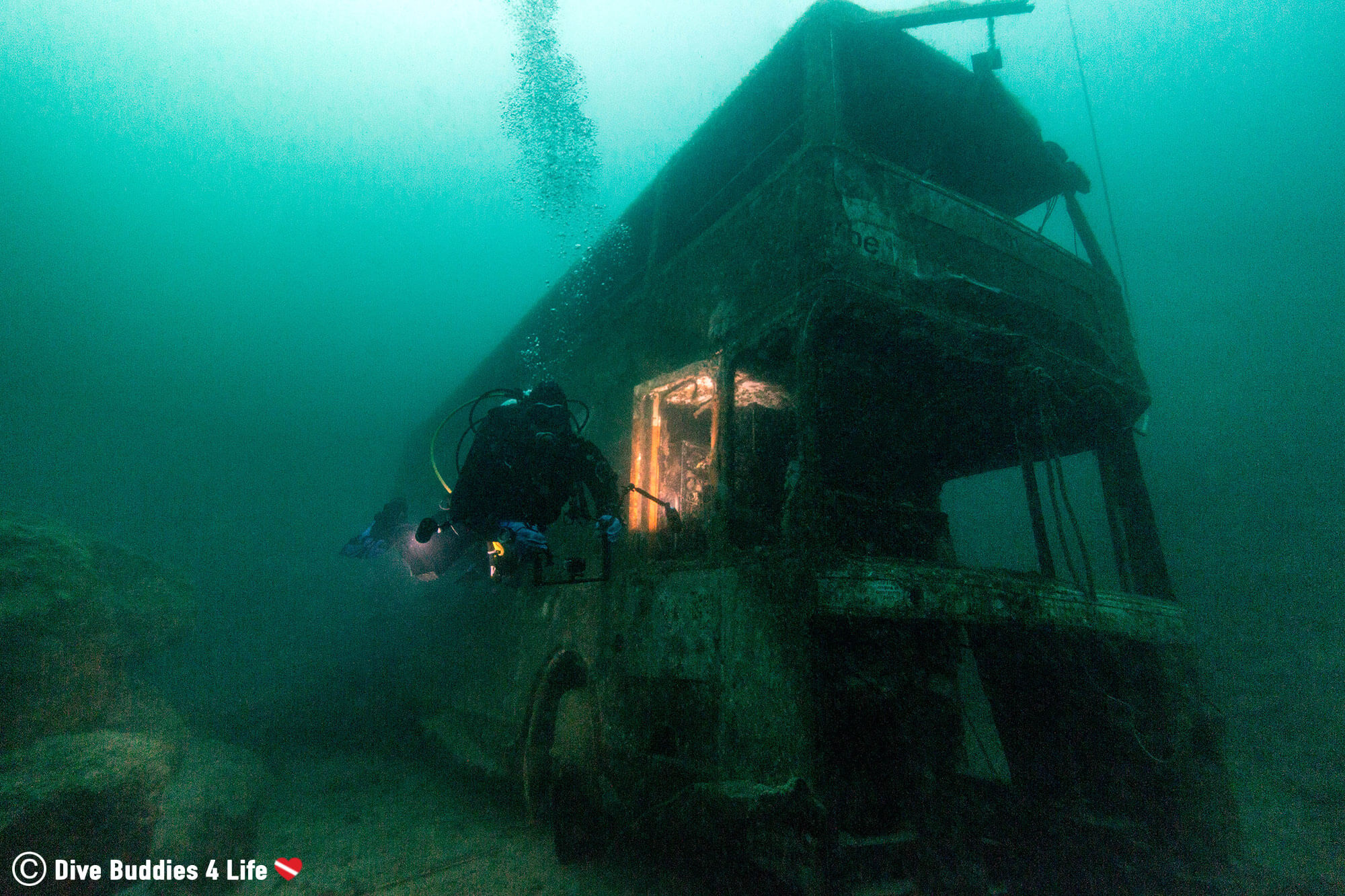 After the iconic double-decker bus, came the airplanes.

Chepstow has three sunken planes; a British Aerospace Jetstream 200, a Devonshire Aircraft and a BAE 146 Airplane. All planes are reachable within recreational diving limits.

My favorite airplane, of the two we decided to hunt out, was the humongous BAE 146 Airplane. At 21 meters (68 feet) long and 9 meters (30 feet) high, this beast of an aircraft was hard to miss and epic to explore.

The main compartment of the BAE 146 commercial aircraft is entirely empty and offers divers the opportunity to swim through its cylindrical hull towards the cockpit. Compared to the double-decker bus, the plane had plenty of room for diver maneuverability, even with my big camera, so I did a couple back and forth glides past the plane’s small circular windows. As I gracefully finned through this silver bullet I gazed out and imagined this bird at the height of her flying days.

When it was his turn, Joey did the same. I could tell by the look on his face that being in a sunken airplane like this one was an otherworldly experience and looking back on the pictures after the fact it almost looks like we are in a space shuttle. Pretty neat don’t you think?? 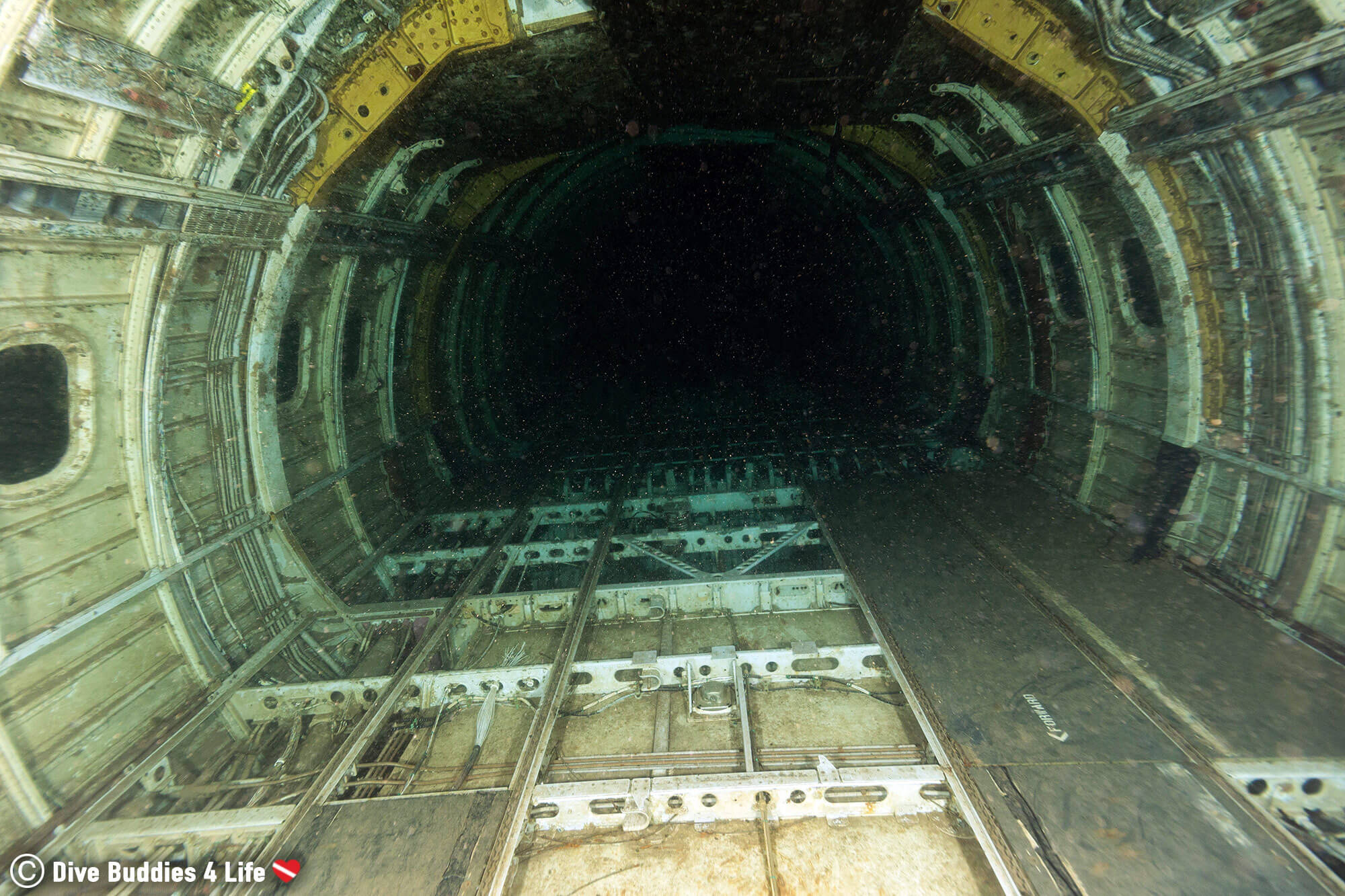 From the shallows of our safety stop, we were afforded a pretty stunning view of these rugged-looking military mobiles. 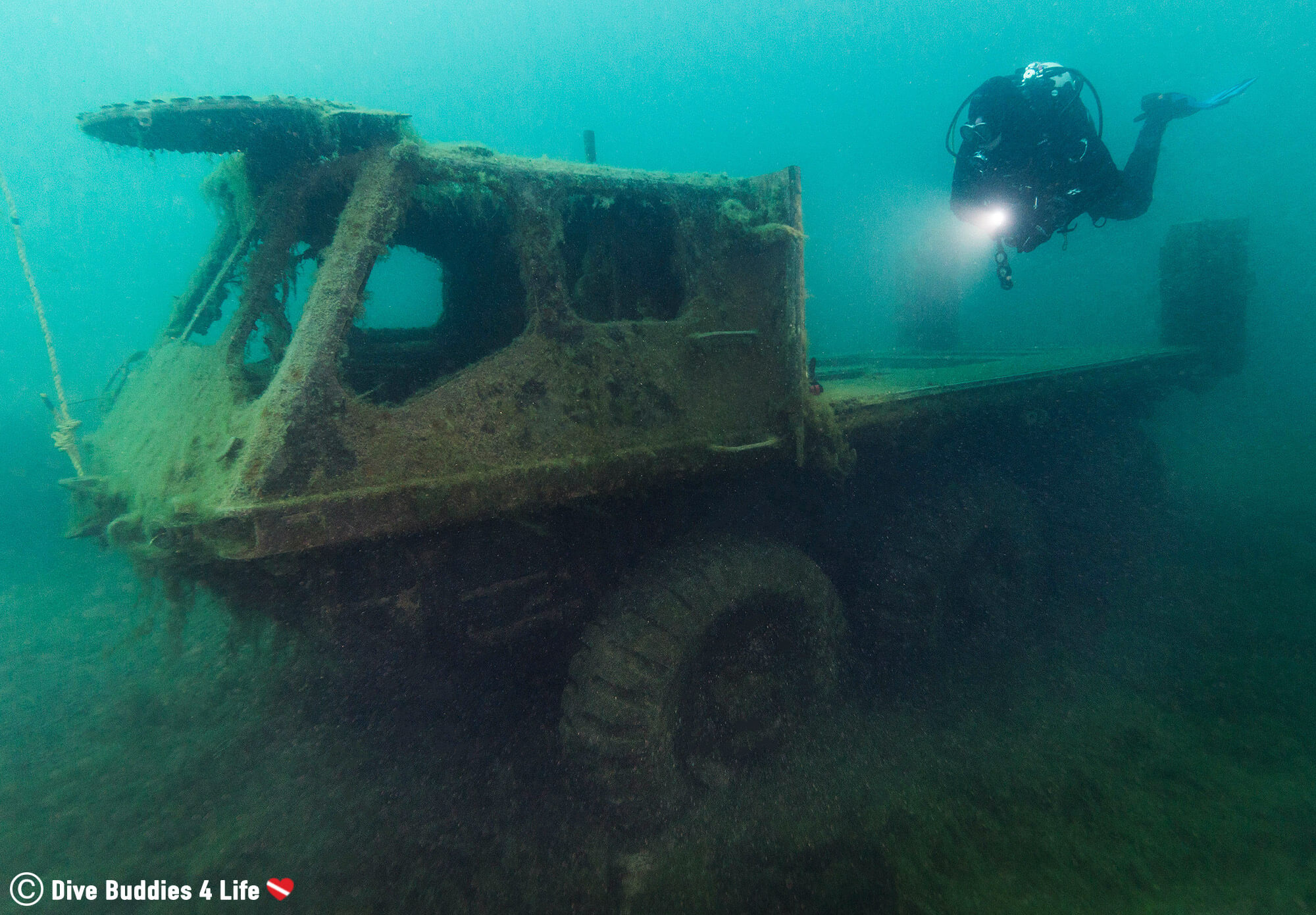 Like a kid on Christmas, Joey whizzed this way and that way, from the front of the armored car to the back of the car, not too sure what to look at first. We used up pretty much the rest of our air in the land rover lagoon.

While we hovered in the water, I enjoyed taking a couple of shots of Joey with his sunken military treasures. The Alvis Stalwart Amphibious Vehicle and the Alvis Saracen Troop Carrier got more than their fill of attention from us! 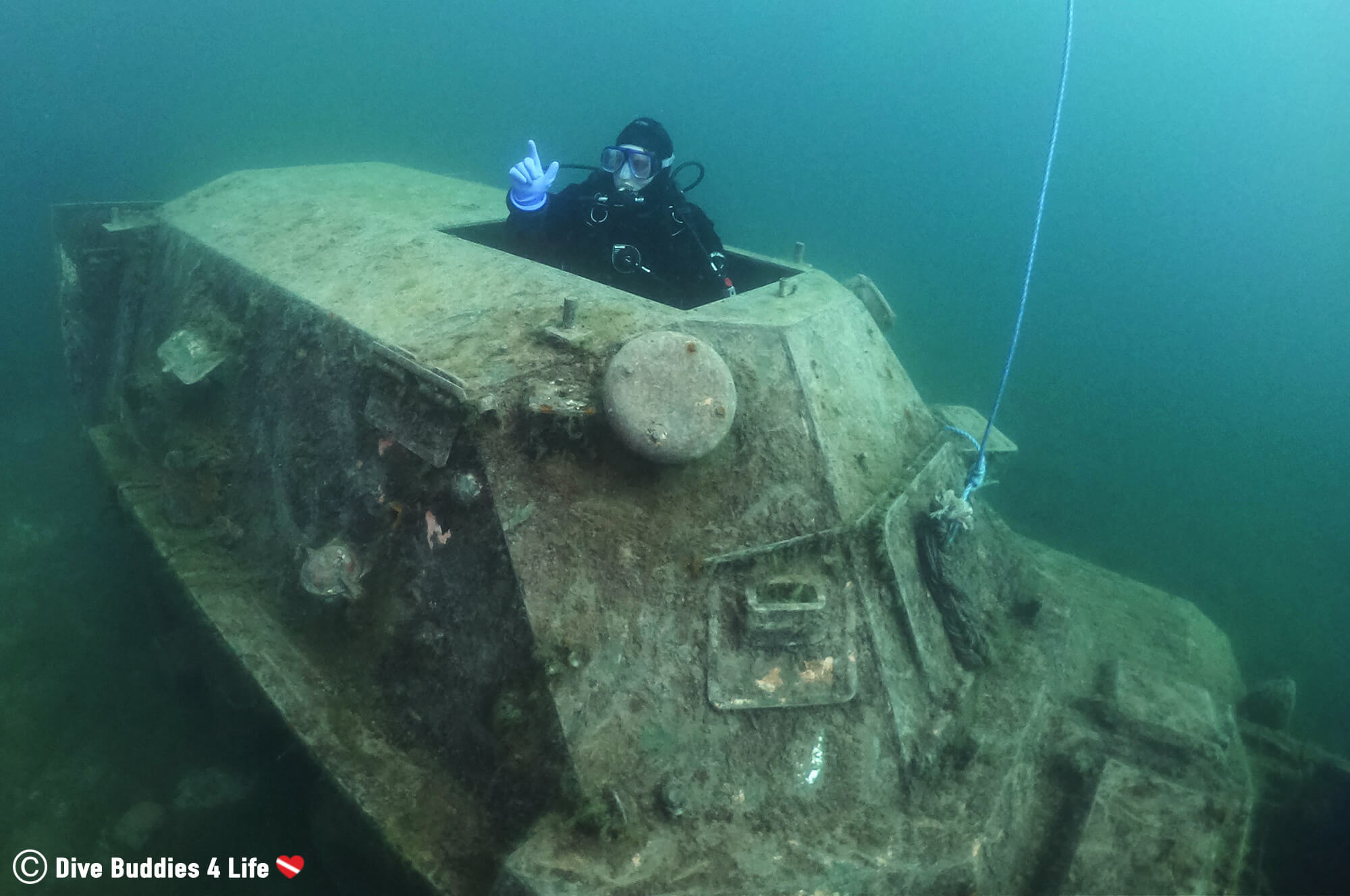 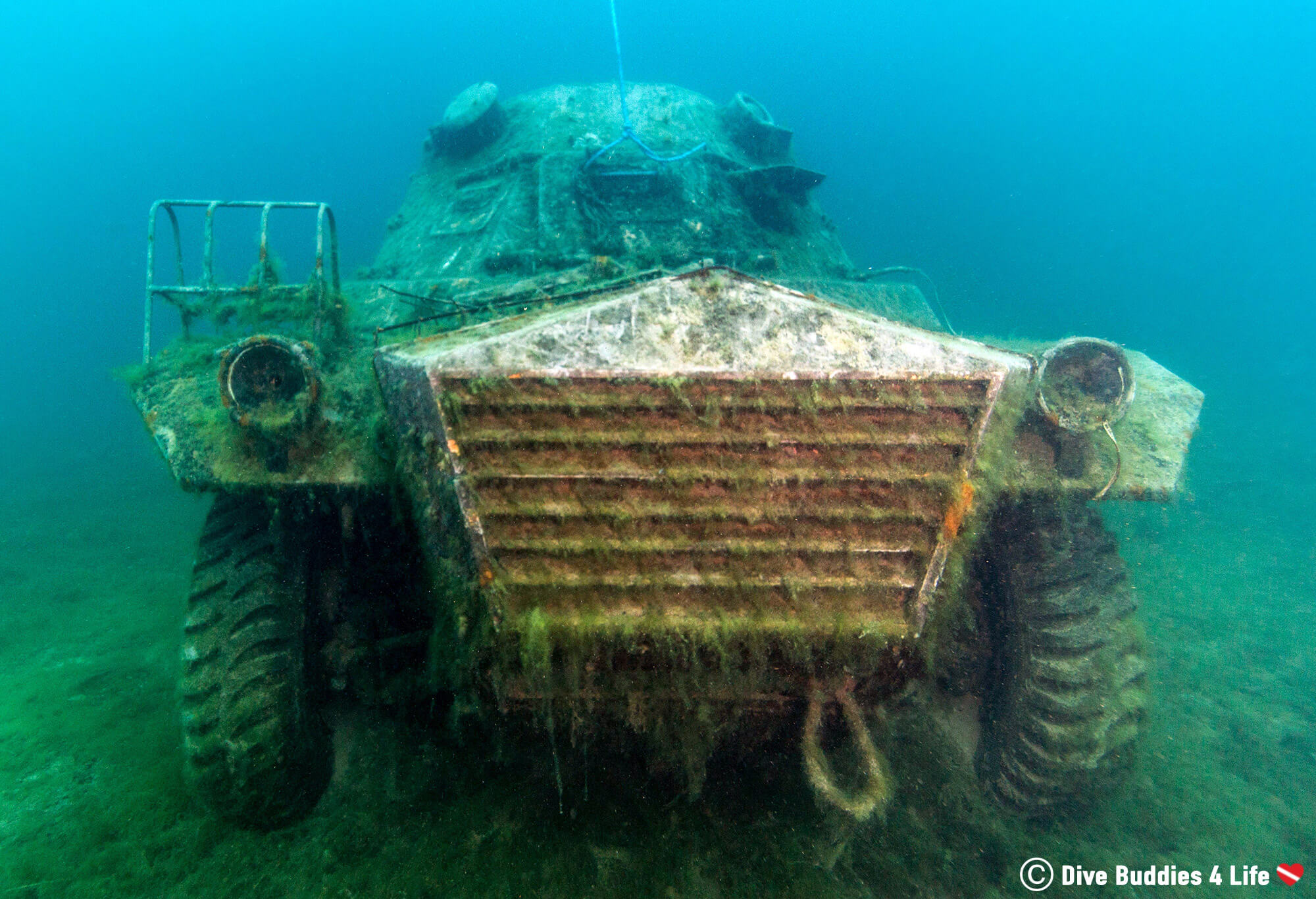 The Brits have got inland diving all figured out… Sometimes it’s not enough to merely dive in freshwater; you want to see some epic and exciting things.

Chepstow Quarry was a welcomed change from our regular ocean dive routine. It will forever be etched into my brain as the quarry where I did my first dive with a helicopter, airplane, double-decker bus, AND army tank. Not only where the staff positively delightful and helpful to new divers, but the water was a picture perfect shade of blue and the visibility was right on par.

The quarry came in highly recommended by a fellow British diver, and we happily support that recommendation a hundred times over. This place is the real deal. Chepstow is a unique attraction with a jungle of fun just waiting both above and below the water. 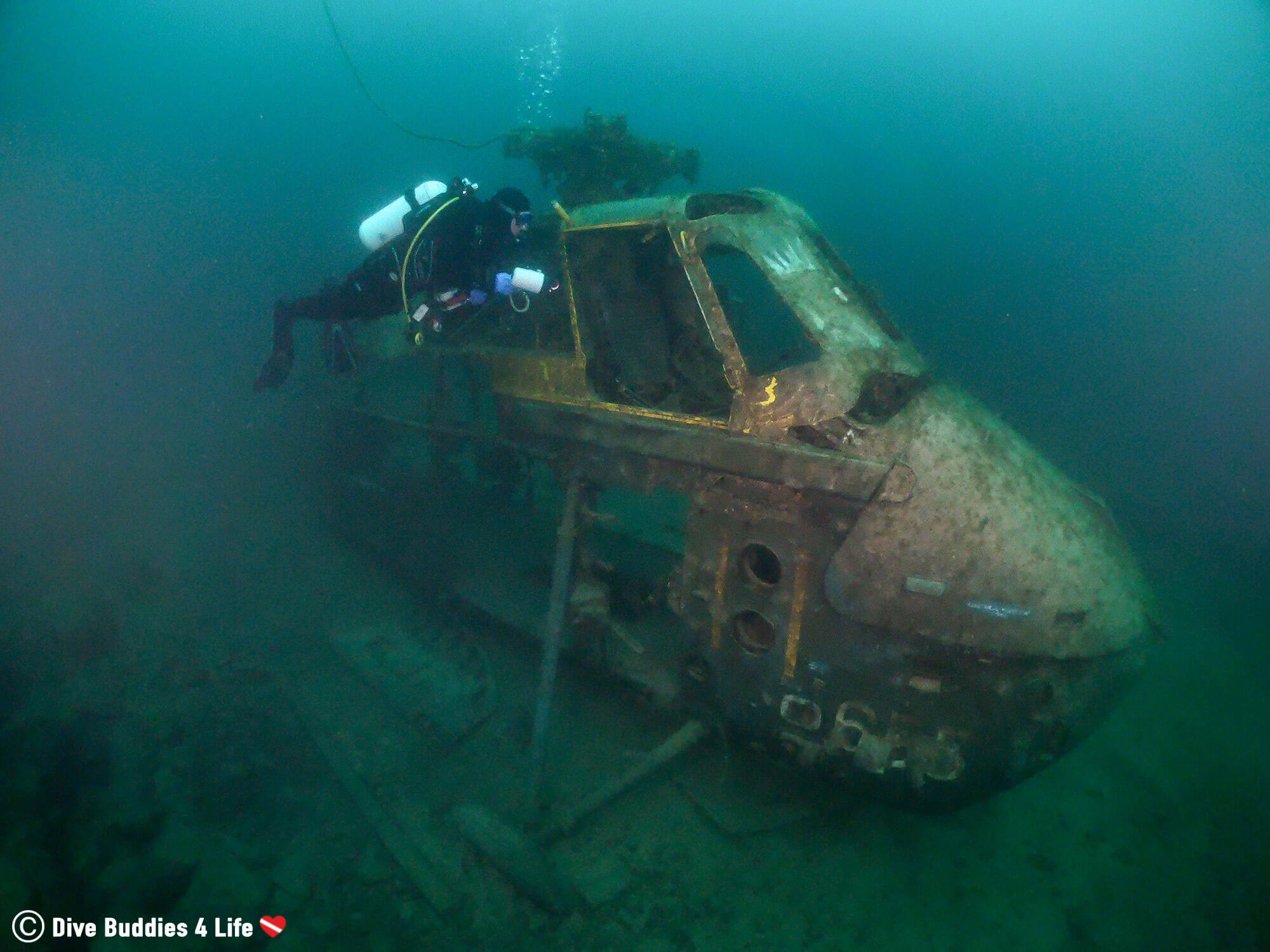 Have you been diving in a freshwater quarry before? What are your sentiments on this style of diving?

Writers Note: Thank you to the National Diving Academy for opening the center up to us and proving how sensational freshwater diving can be. Thanks as well for the dive sitemap which will help new divers find their way around the quarry. 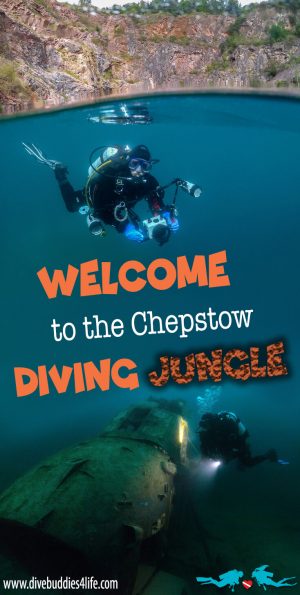