For yet more variety in Canadian scuba diving opportunities, a trip to western Ontario is a great possibility. The largest and mightiest of the Great Lakes, Superior is a wild and unruly place.

Thousands of boats, ships and canoes have been claimed by Lake Superior. Thousands of kilometers of shoreline make up her craggy coast. Thousands of species live in her aquatic realm, coming and going with the change in seasons. 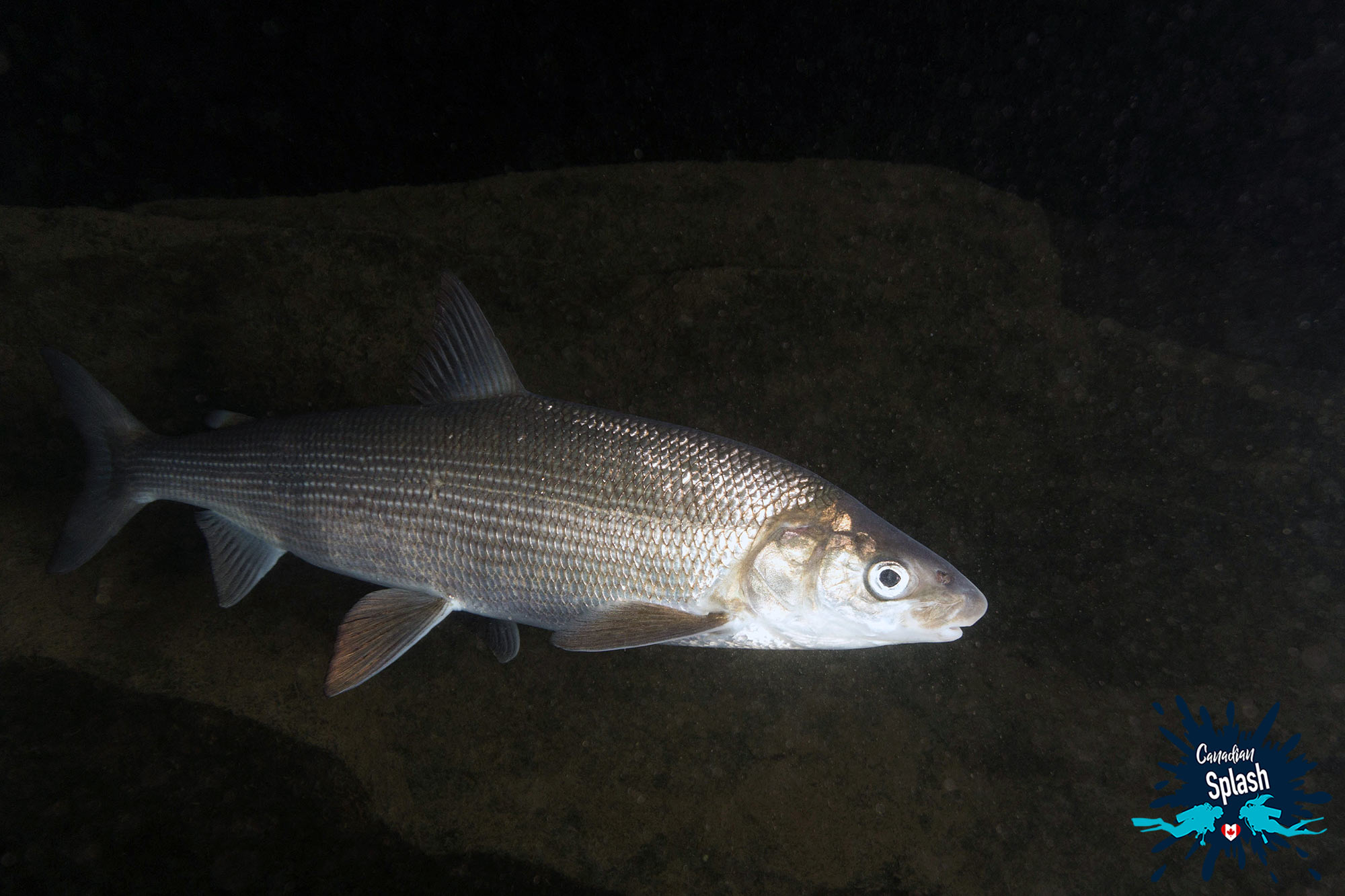 Lake Superior is the largest and most northerly located of the Great Lakes. In terms of freshwater lakes, it is the world’s largest by surface area and third-largest by volume – holding roughly 10% of the world’s surface freshwater. This body of water is fed by more than 200 rivers, including the Saint Mary’s River rapids. The Soo Locks enable cargo ships to pass these rapids and overcome an 8 meter (25 foot) height difference between Superior and Huron.

Thunder Bay is the largest city along Superior’s shores and one of the main diving hubs in the area. There are several shore diving sites that can be explored within an hour of Thunder Bay, as well as many offshore wrecks with dive charters going out in the summertime.

It’s a bit of a lottery as to exactly what diver will see underwater, but under the right season and circumstances big and small freshwater fish sightings are a possibility. Keep an eye out in the blue, try a night dive or visit a wreck.

Silver Harbour Conservation Area is a year-round public access point to Lake Superior. The site can be found roughly twenty minutes from the outskirts of Thunder Bay. Silver Harbour is one of many places in the region that was explored for silver in the 1800s.

At first glance, Silver Harbour doesn’t seem like much – merely a boat launch and picnic site at the water’s edge. Truth be told, that was my very impression when I first laid eyes on this run-of-the-mill waterfront location. But having an adventurous spirit, I was quick to discover that this site offers more than its initial appeal. Silver Harbour Conservation Area is actually a pretty unique scuba diving site, particularly with the changing of the seasons. 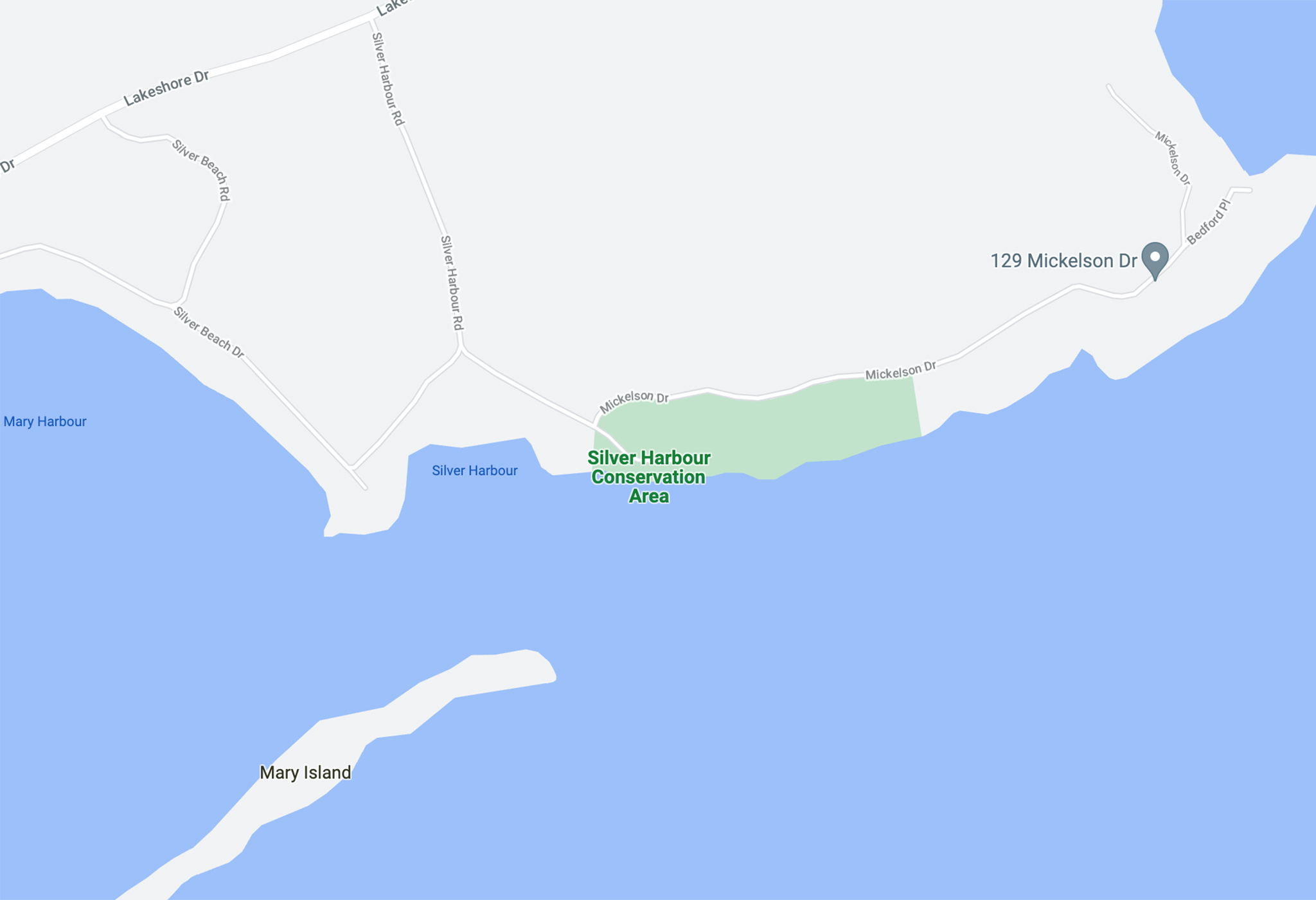 GPS Coordinates: 48.5099, -88.9741
Address: Silver Harbour Conservation Area, Shuniah, ON P7A 0G4
Divers can access the water via the boat ramp or docks and follow the shoreline towards the east. 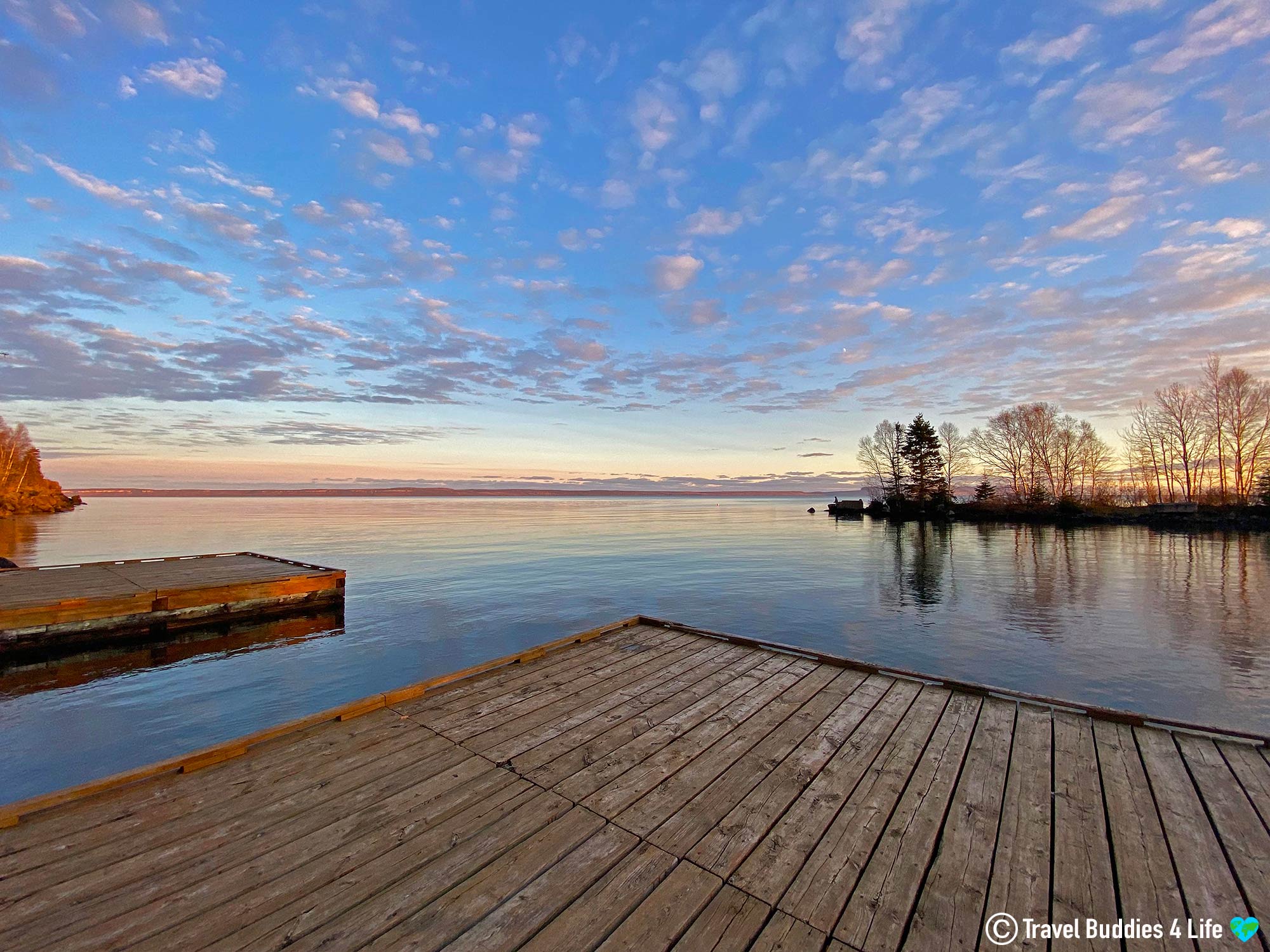 The air is glacial – the water feels even colder. It is just after suppertime and the sun is setting over Silver Harbour Conservation Area leaving watercolor of hues painted across the sky. Lake Superior sure is pretty at this time of day.

I stand beside our scuba diving van suiting up in layers upon layers of thermal protection. I have on enough shirts, sweaters and fleece that I feel like an Oompa-Loompa. But I will need all the warmth I can muster for this evening’s special spawning dive. 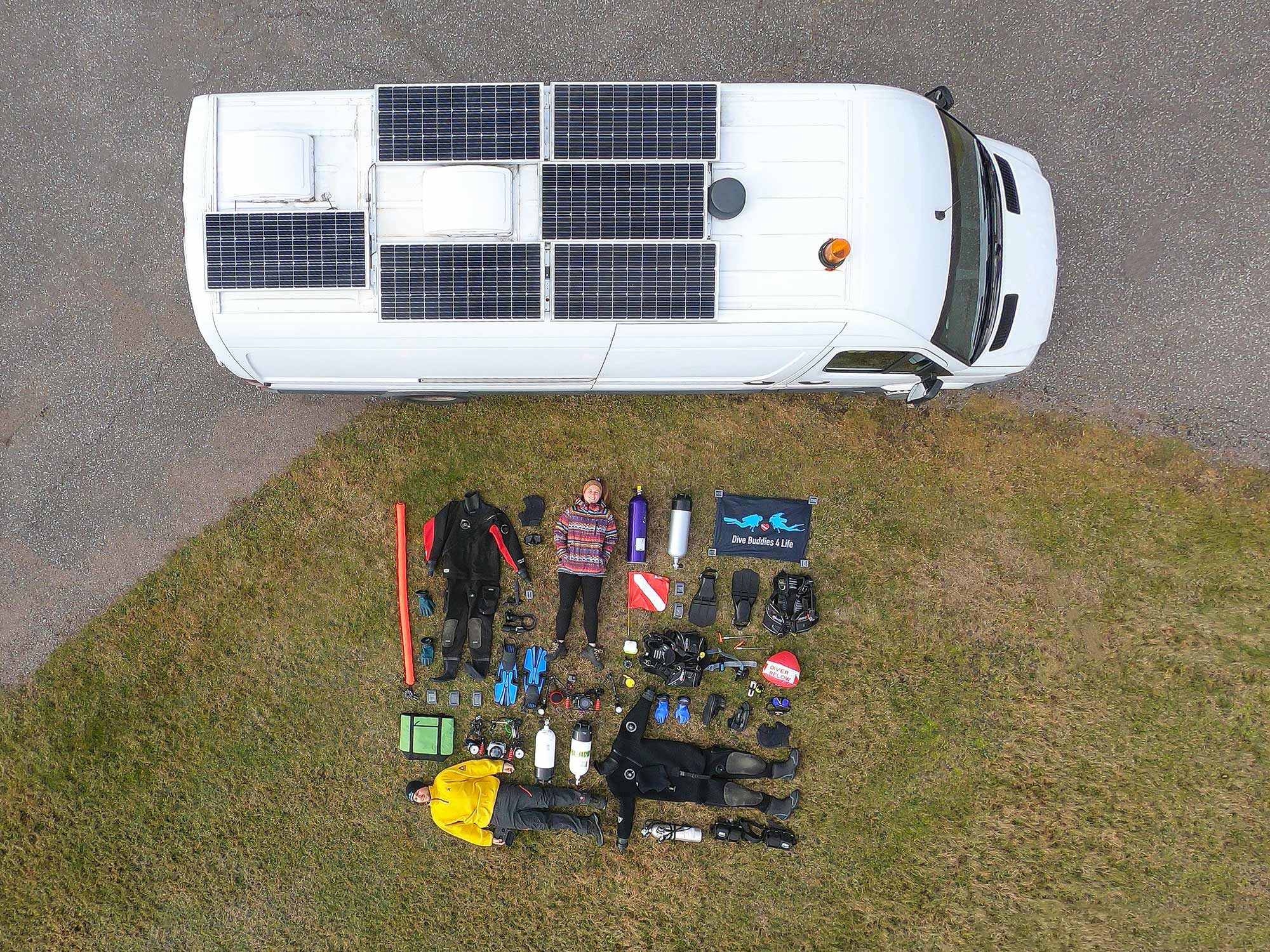 Want to find out more about our van conversion? Converting and living in your very own sprinter van is a wonderful way to see the world for less. As a pair of scuba divers, we converted this van as a means to travel and scuba dive across Canada.

Along the shoreline of Thunder Bay, as the summer season changes to fall and water temperatures are in flux, masses of whitefish more inshore to spawn in the shoals of rocks and gravel. Whitefish are freshwater fish found throughout much of Canada and in parts of the Northern US. They are valuable commercial fish preferring colder, deeper bodies of water.

This night’s frigid dive was planned in conjunction with the lake’s change in temperature. Joey, myself and a group of local divers braved the icy conditions to experience this one-week-per-year occurrence.

Unfortunately being our first time diving this location we spent more time familiarizing ourselves with the lake’s topography than actually finding whitefish. Our dive was done in a shallow 4.5 meters (15 feet) of water. On the whole we saw only a few skittish silver bodies barely approaching the outskirts of our light beam. After speaking with some of the local club members we found out that even as shallow as 4.5 meters (15 feet), we were too deep.

In spite of our pitiful attempt at finding whitefish on our first try, Joey and I decided to attempt a second dive the following night. Being just the two of us we hoped to have better luck.

Entering the water at the conservation area docks, we swam east through the cold but clear water. In a few short minutes we left the confines of the harbour hugging the winding shoreline. We followed the underwater landscape staying near the patches of rocks and remaining between a depth of 1.5 to 2 meters (5 to 7 feet).

It didn’t take long in this shallow rocky area for us to catch our first whitefish sighting. A long narrow two-and-a-half-foot body sparkling through our beam of light. After the first sighting more whitefish made their appearance out of the hushed blackness. It wasn’t long before we found ourselves surrounded by glimmering bodies weaving this way and that, some coming close and others remaining at the edge of our lights. At one point I counted over 30 fish encircling our bubbles. It was a whitefish spawning jackpot.

Most of the whitefish wanted nothing to do with us and spent their time and energy rubbing themselves against the rock bottom. Males would release small faint puffs of white into the water column. It was a process that seemed to repeat itself over and over. Joey and I knelt on the bottom playing witness to this feat of nature until our tanks were almost dry. 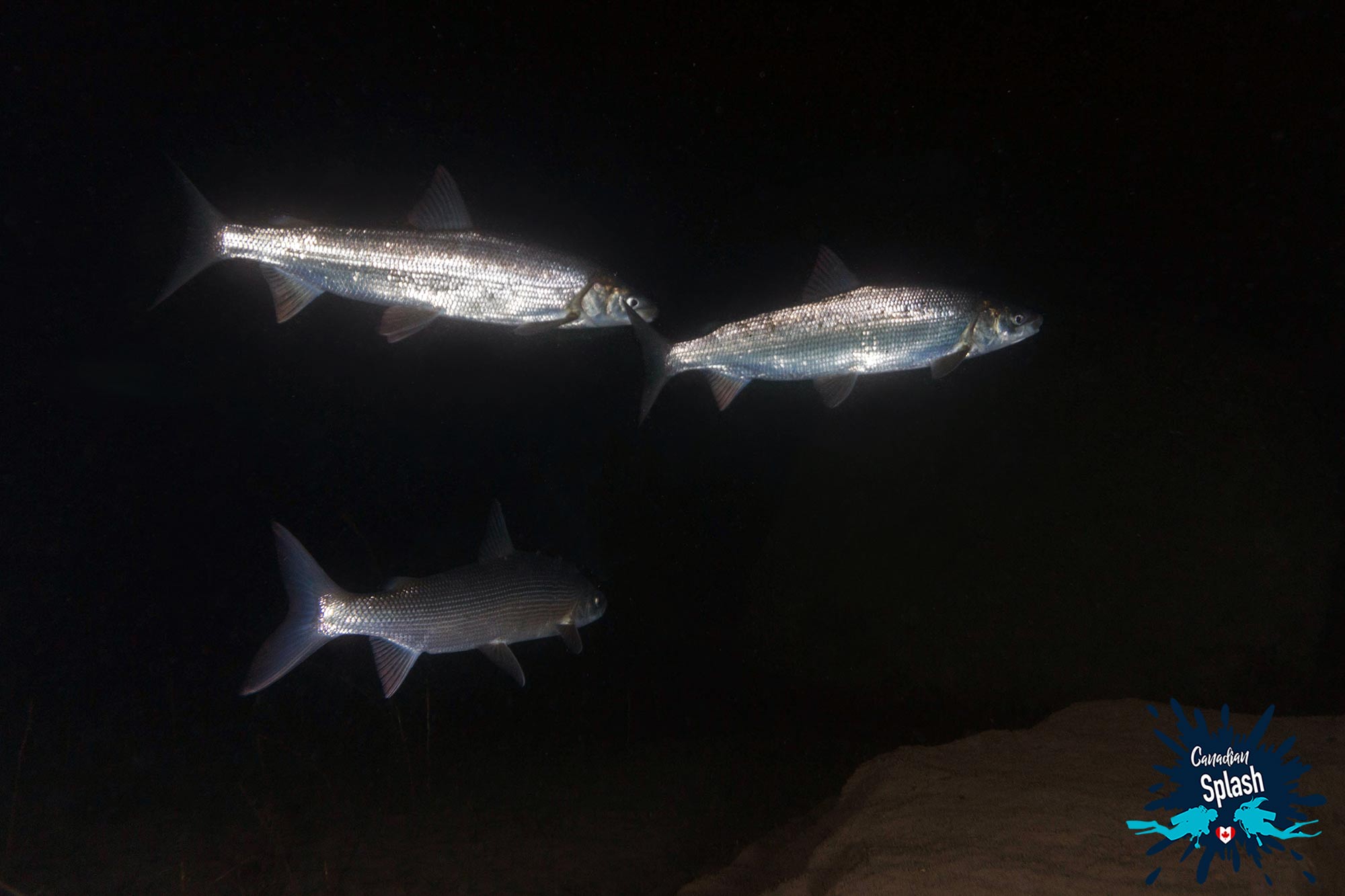 Thunder Bay’s Lake Superior was an exciting new Ontario dive location which we were thrilled to share. Sure the water may be fresh and cold but our lucky timing allowed us the chance to participate in the region’s seasonal whitefish spawning – where beneath the surface of the water a drama of life unfolds. Suffice to say, after enjoying an hour of this miraculous spawning dive event it took several large mugs of steaming hot chocolate for Joey and me to get everything back to temperature. 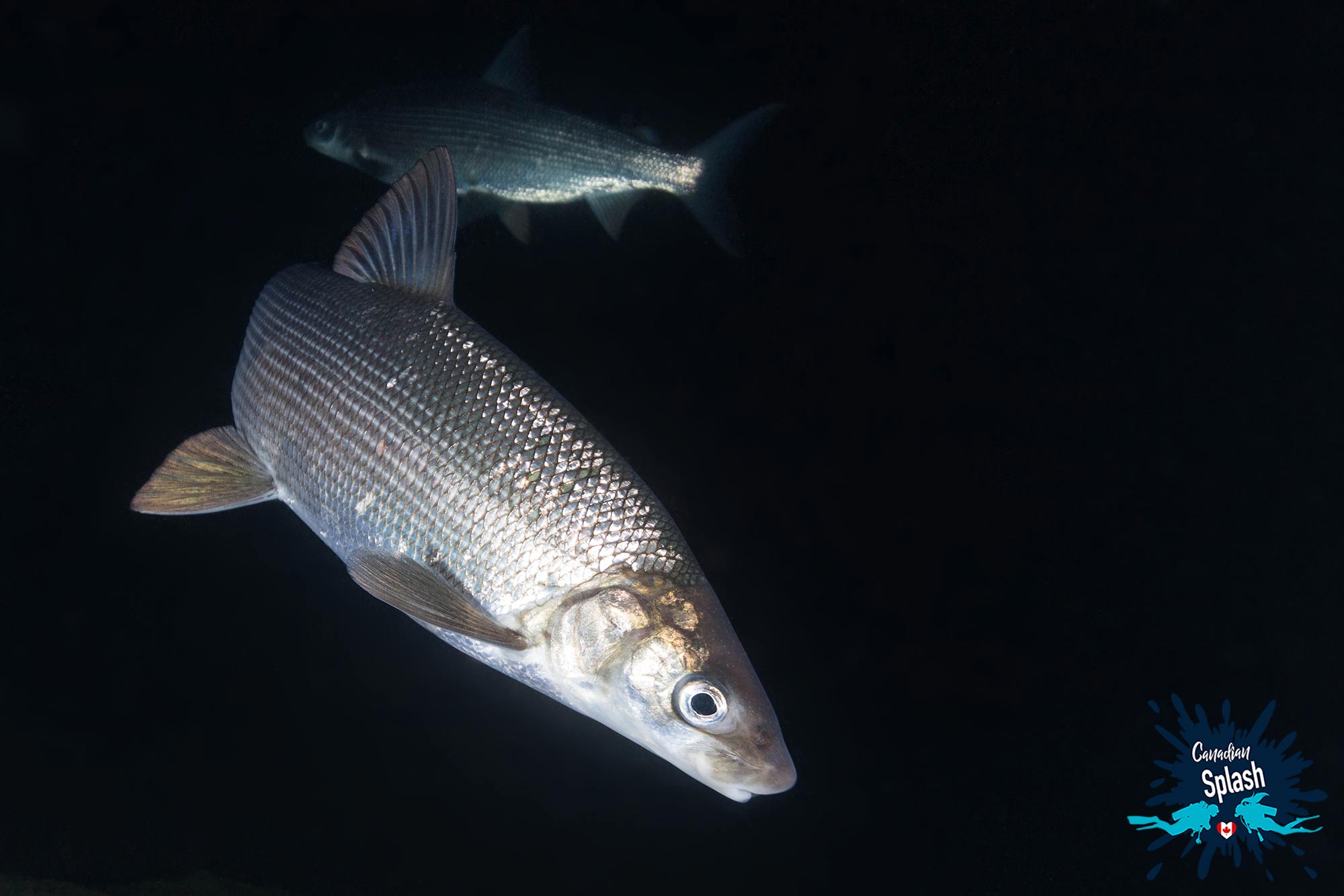 Have you ever experienced a mass spawning such as this event in a freshwater environment? What kind of species did you encounter?

Additionally, this scuba diving location was featured in Scuba Diving: Scuba Diving the Whitefish Spawning in Lake Superior as a part of their online publication. Want to explore more diving in Ontario? Take a look at H2O Ontario to discover more interesting Ontario-based dive adventures. 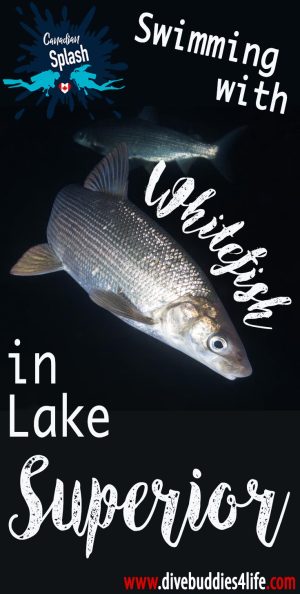