Germany: To the Top of the Gas-o-meter

Just when you think you’ve seen it all, WHAM! Diving throws you an unexpected curveball. For us, this happened in the country of Germany.

Germany as a Scuba Diving Location

Germany is an exceptionally prominent vacation spot when it comes to medieval history, fairytales and schnitzels. Surface activities aside, where scuba diving is concerned Germany is hardcore.

Bordered in the north by the Baltic and the North Sea, there are many coastal locations that beg some scuba diving attention. But what is even more intriguing, is the unexpected inland locations to be explored.

A new diving opportunity in a strange and unusual place is not something you pass up – especially if that place is well within a couple of hours drive of your accommodations.

The Tauchrevier Gas-o-meter is a mind-boggling dive facility considered the largest (in terms of volume) indoor diving basin in Europe. Located in Landscape Park Duisburg Nord, the Gas-o-meter holds 21 000 000 liters (5 547 613 gallons) of rainwater and an underwater landscape that is astounding. 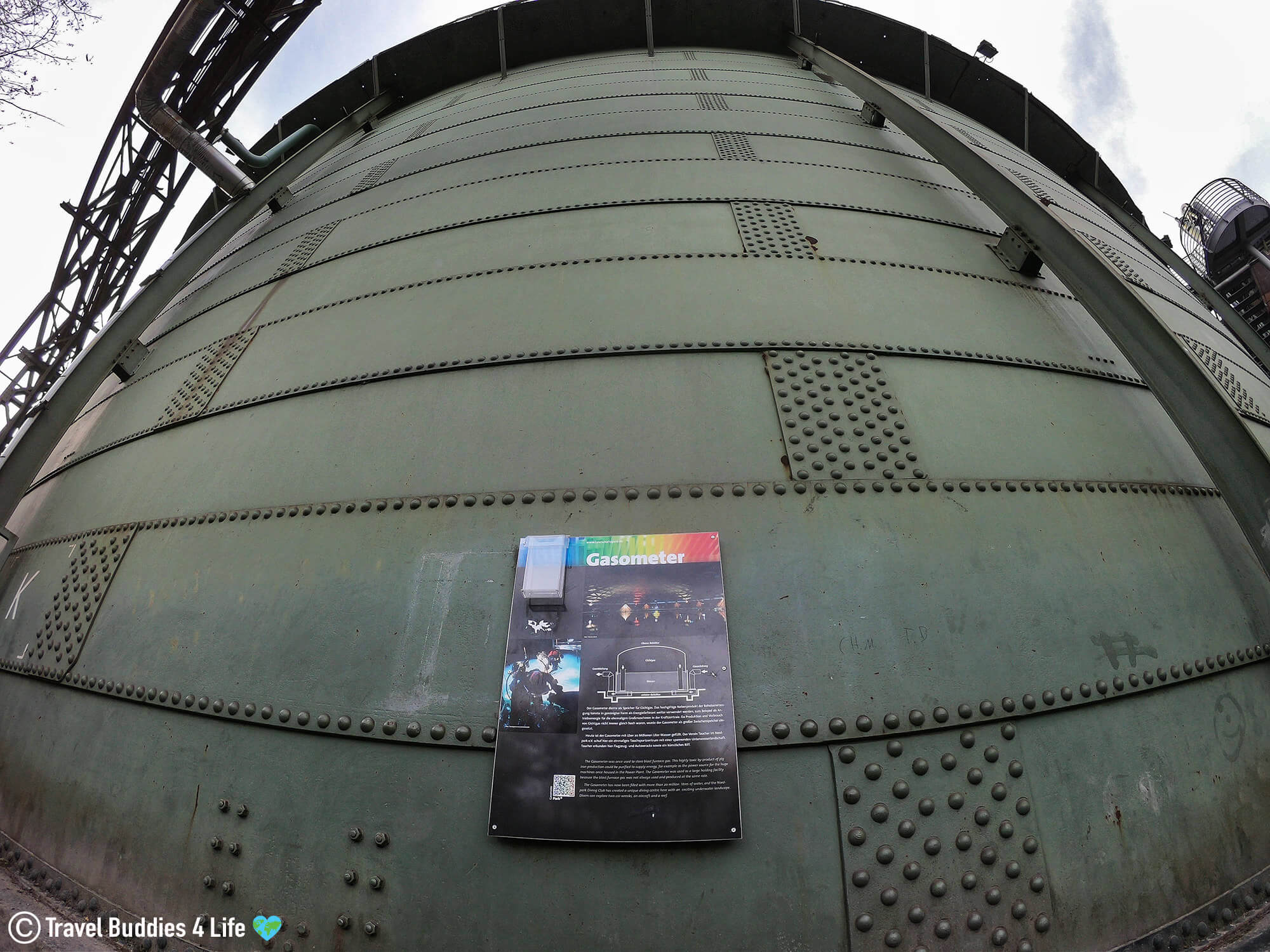 A gas-o-meter is a large container where natural gas or town gas is stored. It acts as a buffer removing the need for continuous gas production. These gas holders tend to be used for balancing purposes rather than for actual gas storage, to ensure the associated gas pipes can be operated within a safe range of pressures. 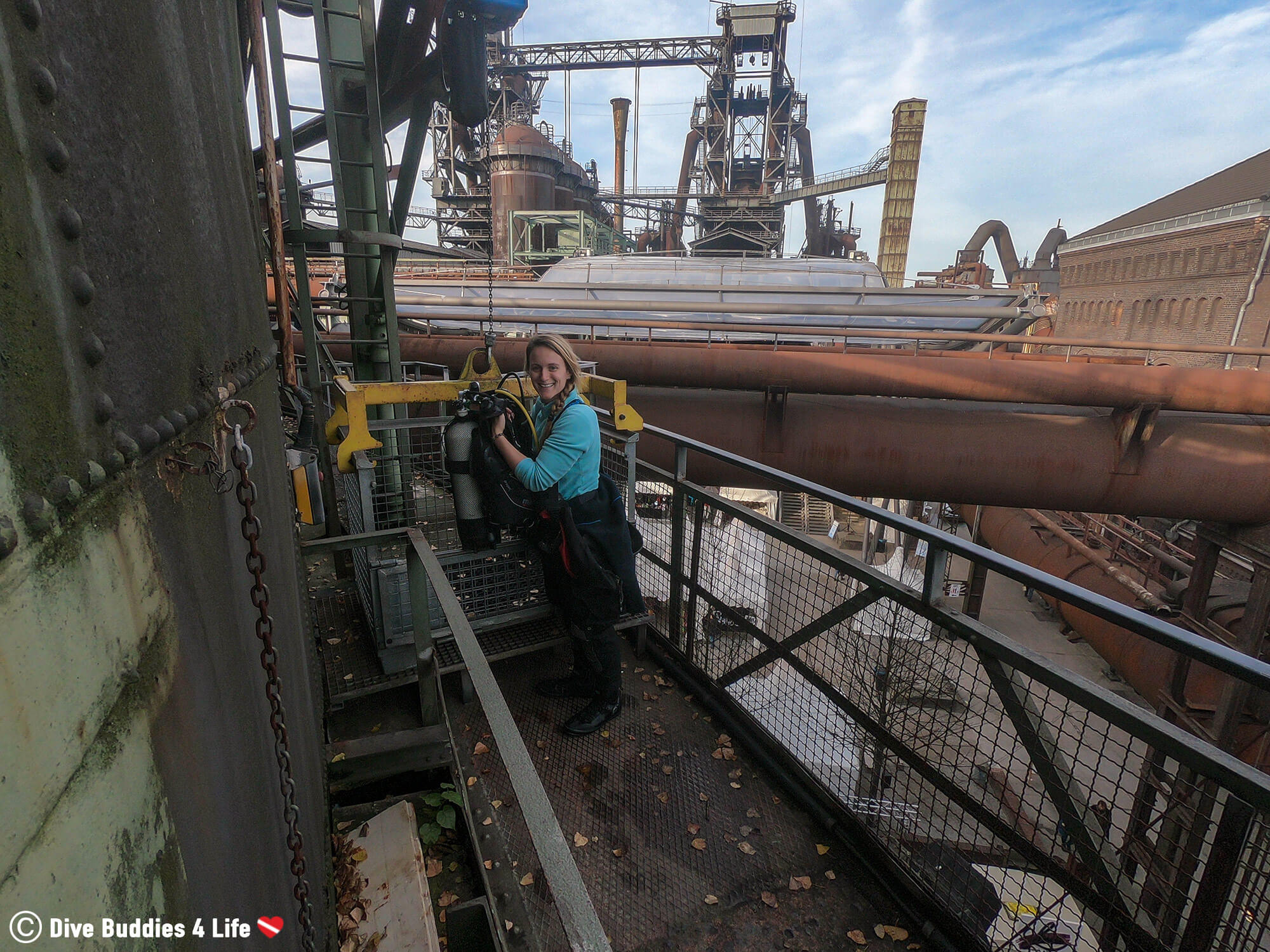 Now the retired Gas-o-meter has a new use, one that can only be described as extreme.

Curious divers can climb to the top of the Gas-o-meter tower and float 13 meters (43 feet) down to the bottom of this unique underwater landscape, one that cannot be found anywhere else in Europe. Here they will find a shipwreck, aircraft, two cars, and artificial reef and lots of other smaller knick-knacks. It’s an open invitation to explore and discover. 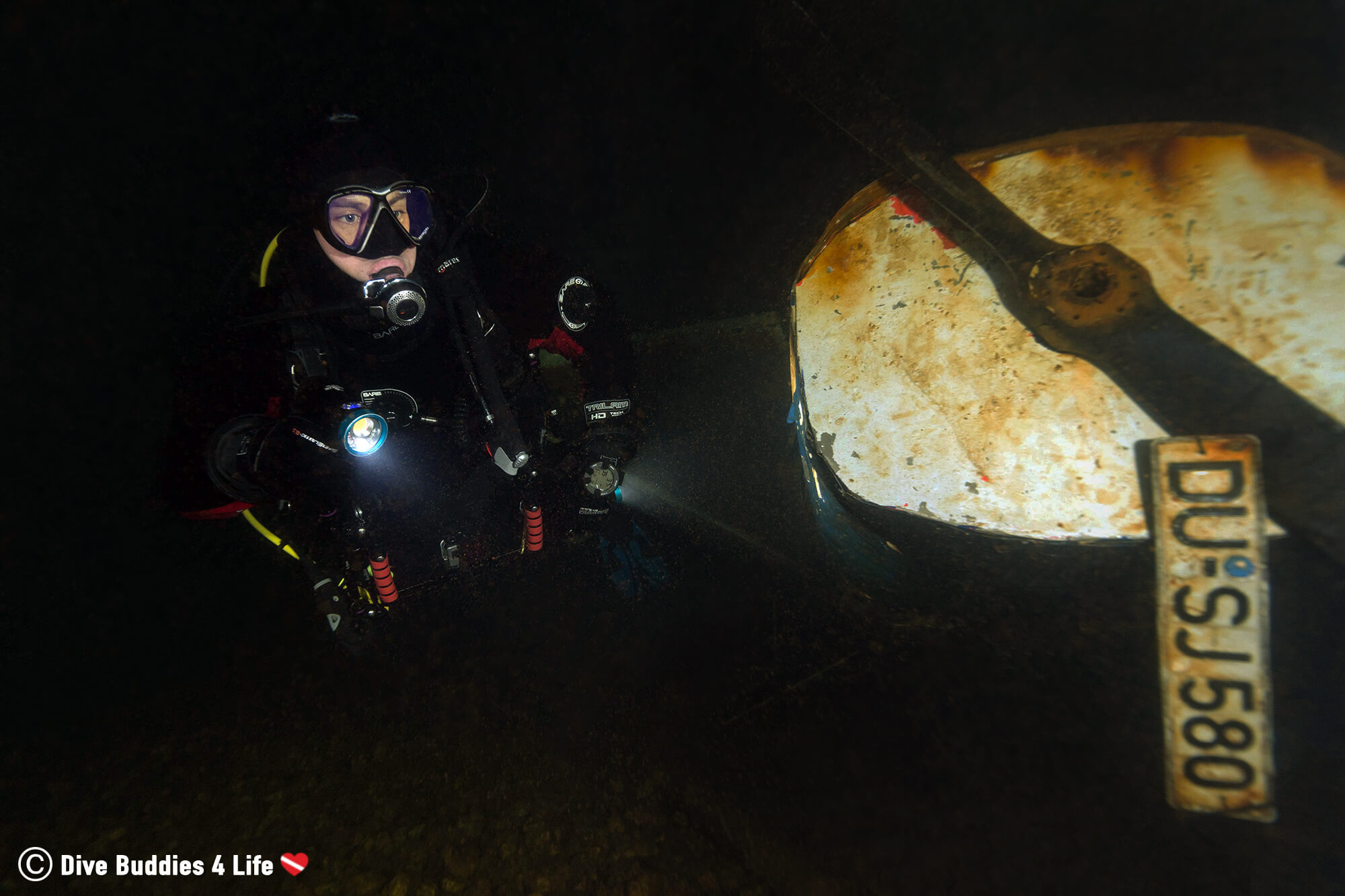 Up, Up and Into the Giant Gas Container

Pulling in to the Tauchrevier Gas-o-meter parking lot gave me that nervous-anxious feeling that I was a dive student all over again. I was well aware that we would be scuba diving, but aside from that, I had no idea what to expect.

After checking in at the front gate, we suited up in our drysuits and carted our dive gear across the road, into the Landscape Park of Duisburg Nord. Pipes, large receptacles and other metal knick-knacks peppered the landscape as far as the eye could see. I tugged my wagon of equipment along the pathway following the maze of signs leading us to the large repository turned dive pool.

Once at the base of the Gas-o-meter Joey and I loaded our tanks, weights, BCD, fins, and regulators into a mechanically operated lift basket. While our gear was being sent up, we hooved it up the zig-zagging metal stairs. 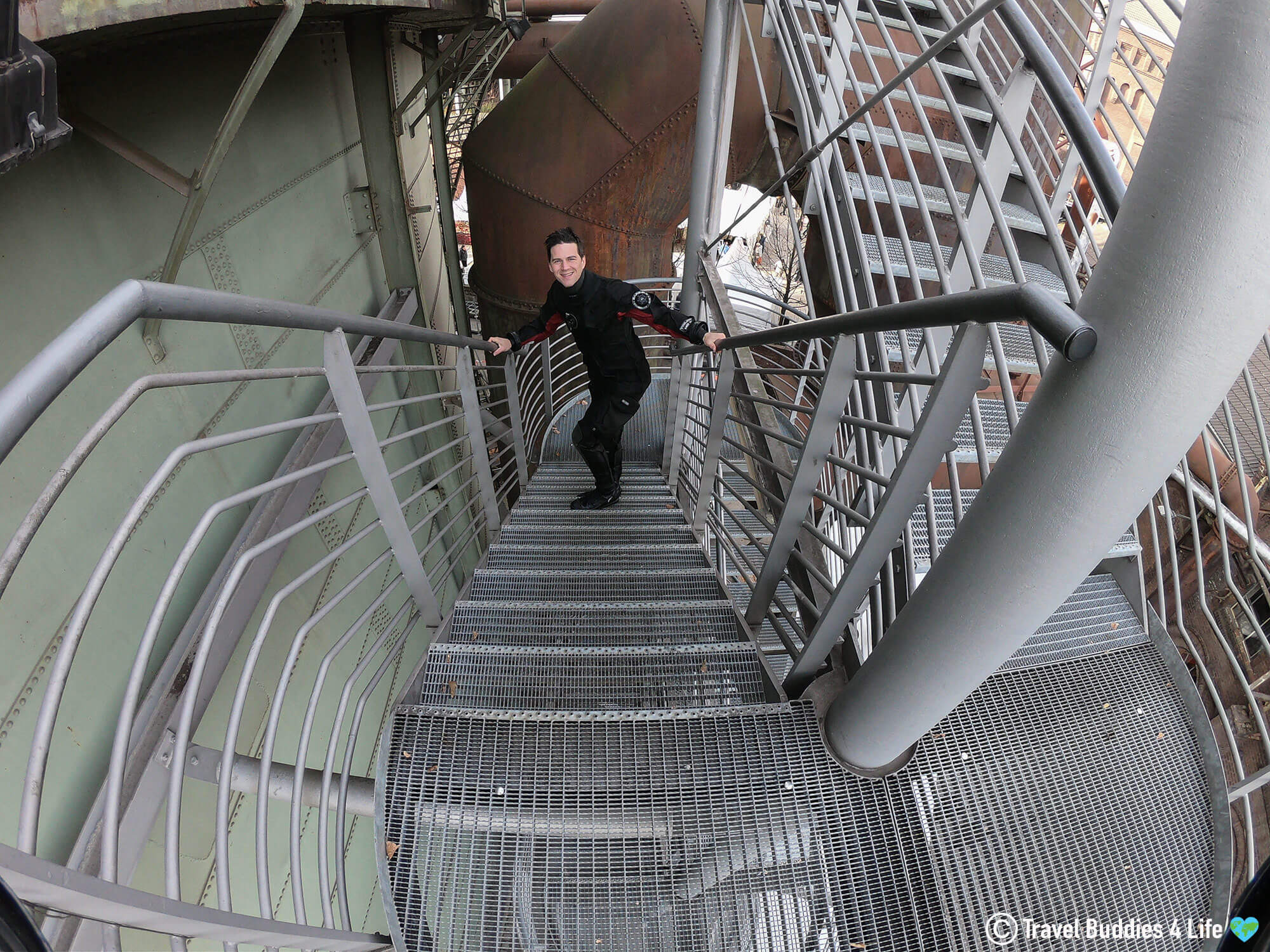 In general, I consider myself a pretty fit person, yet it was quite a hike to the top. One step, two-step, break, repeat. The more we climbed the better the view of the industrial jungle we were about to dive.

When we reached the top of the stairs, our dive gear was waiting to be unloaded from the lift-basket and brought into the pool facility. Kits on our backs and dive fins in hand we headed toward the door like opening leading on deck.

As we entered through the frame clouds of white water vapor escaped from the door. It made it almost impossible to see. I squinted through the billowing mist and could see several divers on the pool deck warming themselves around a lamp-style heater. It was a sharp reminder that on top of the zero degree air temperature, we would also be facing cold water as the pool is not heated or insulated. 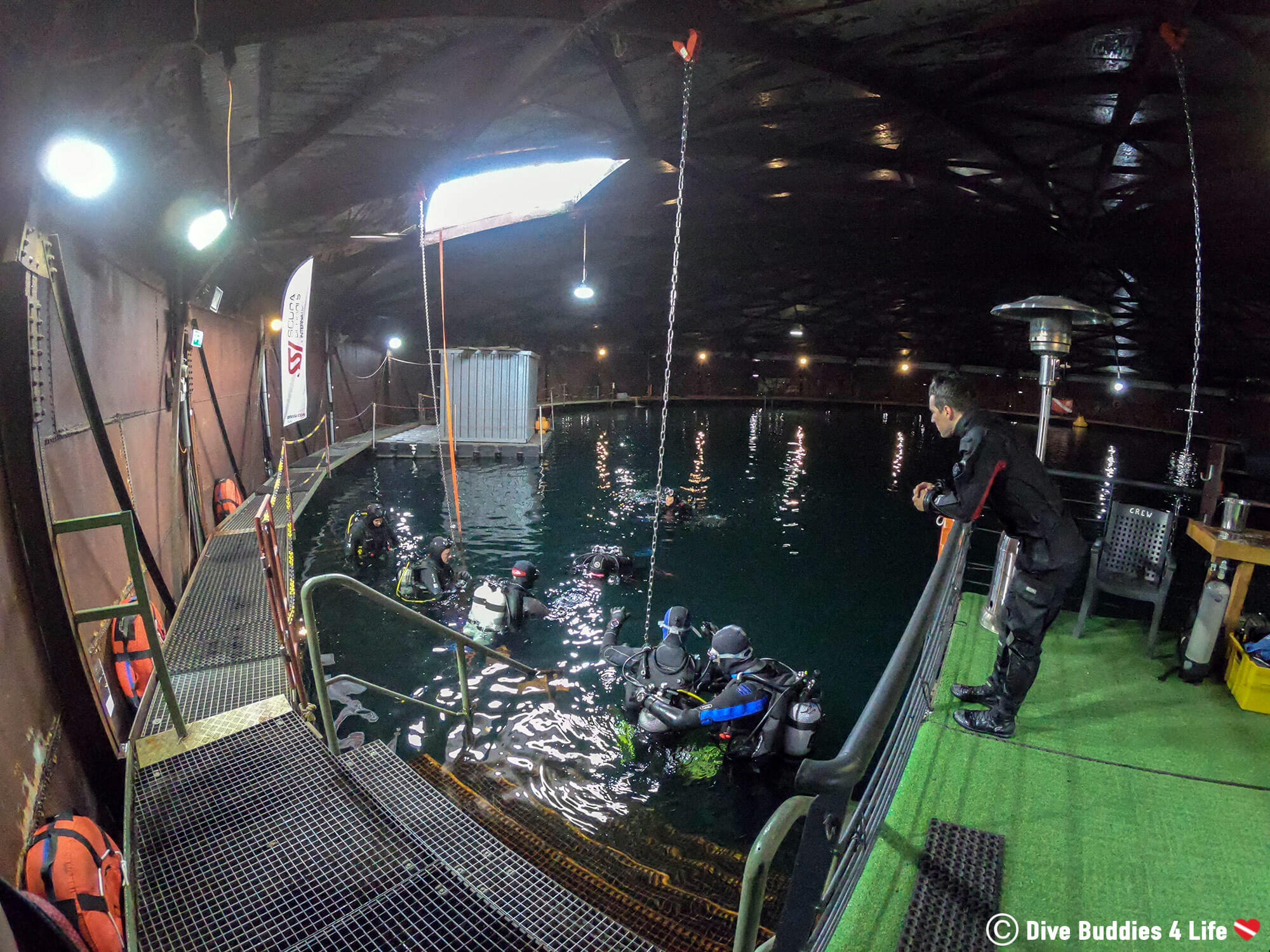 We wasted no time gearing up and getting into the dark, cold water. Aside from Joey and I, there was only two other divers underwater. How lucky were we?!?

Once I got my bearings, I began to explore this otherworldly place. Never have I dove in an environment quite like this one.

It was dark, which not only limited visibility to some extent but also made things feel very eerie. Floating there and gazing out into the water’s inky blackness gave me that odd sense of vertigo. It made it really easy to lose track of which way was up and which way was down. Thankfully we had several photography lights which helped light up the Gas-o-meter’s dismal abyss. 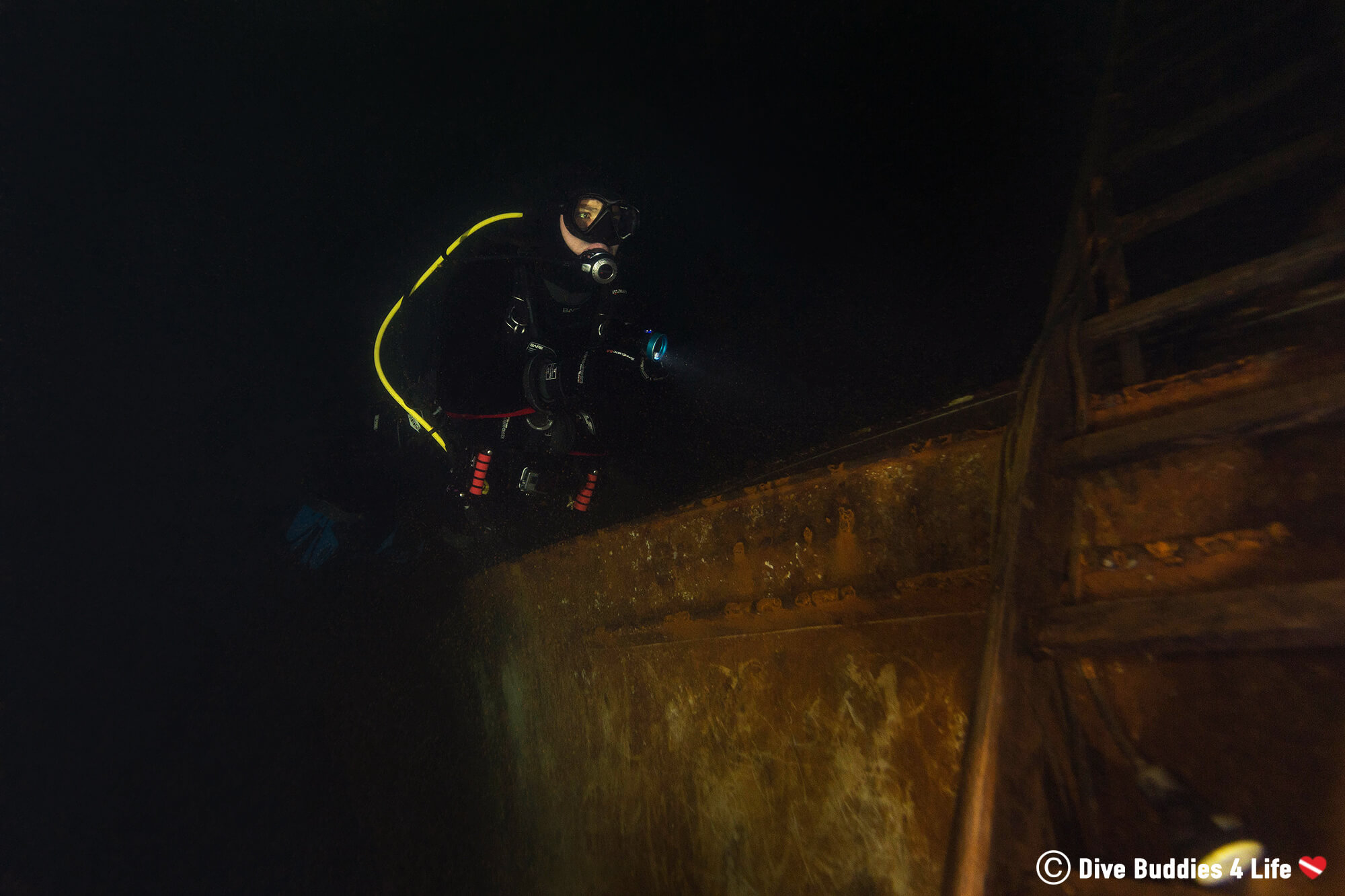 At 12 meters (40 feet) deep we found the pebbly bottom and on it one of the two sunken airplanes. Being cautious not to kick up bits of silt which had accumulated over the years, we circled the plane.

The aircraft was a bi-plane that could seat roughly 2 people. Measuring approximately four body lengths from tip to tail, this metal bird was showing signs of slow but steady wear. As proof, the once white and blue painted vessel had large areas of rust running along its seams. But wear and tear aside, what was really neat about this sunken wreck was the propeller and license plate still attached to the airplane nose. 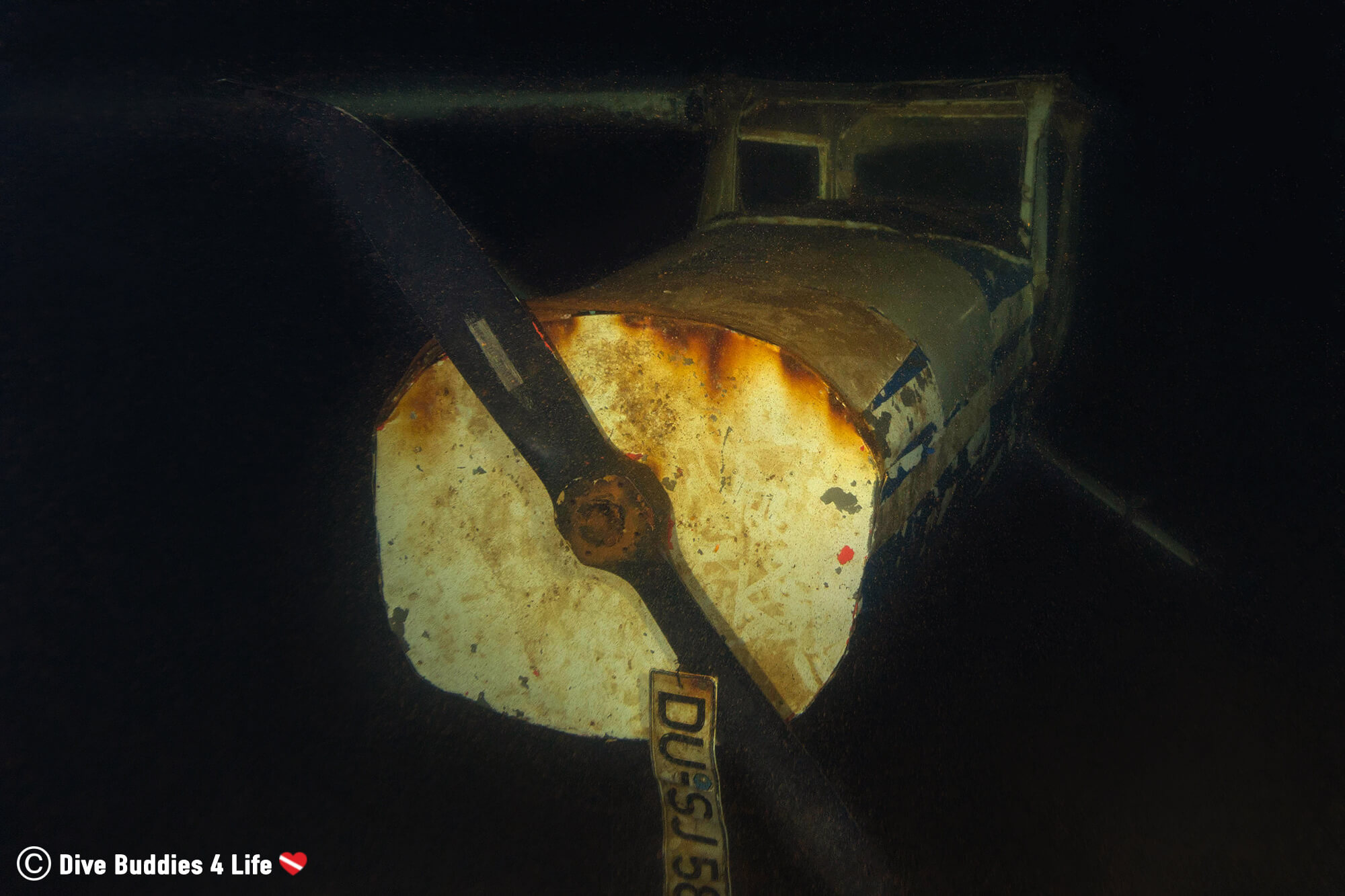 Continuing our exploration of the Gas-o-meter diving pool we followed a trail of small objects.

First a postage box, then some man-made rock formations with a fake lobster. There was also a Christmas tree and an abstract formation of various street and road signs. Even though we were far from Canada, our little scuba diving smurf felt it was fitting to take a picture with his favorite sign.


The trail of objects we were following, got a little bigger when found a couple of sunken vehicles. We explored a big boxy German ambulance and an old-school beetle one after the other. Sunken cars and airplanes are always so strange to see while underwater because unlike boats they are in a completely unnatural environment.

Towards the last leg of our dive Joey and I stumbled across the second sunken aircraft.

This airplane was heaps and bounds bigger than the last. Just one glance at the plane and I was already imagining the dive team that it took to get this metal shell at its final resting place.

The plane was missing the tail and consisted of the front and midsection. The vessel was completely stripped of seats and clutter which allowed for easy penetration and swimming. It was nice to see that for a lot of the sunken attractions in the Gas-o-meter, most had been stripped of their sharp and unnecessary parts. 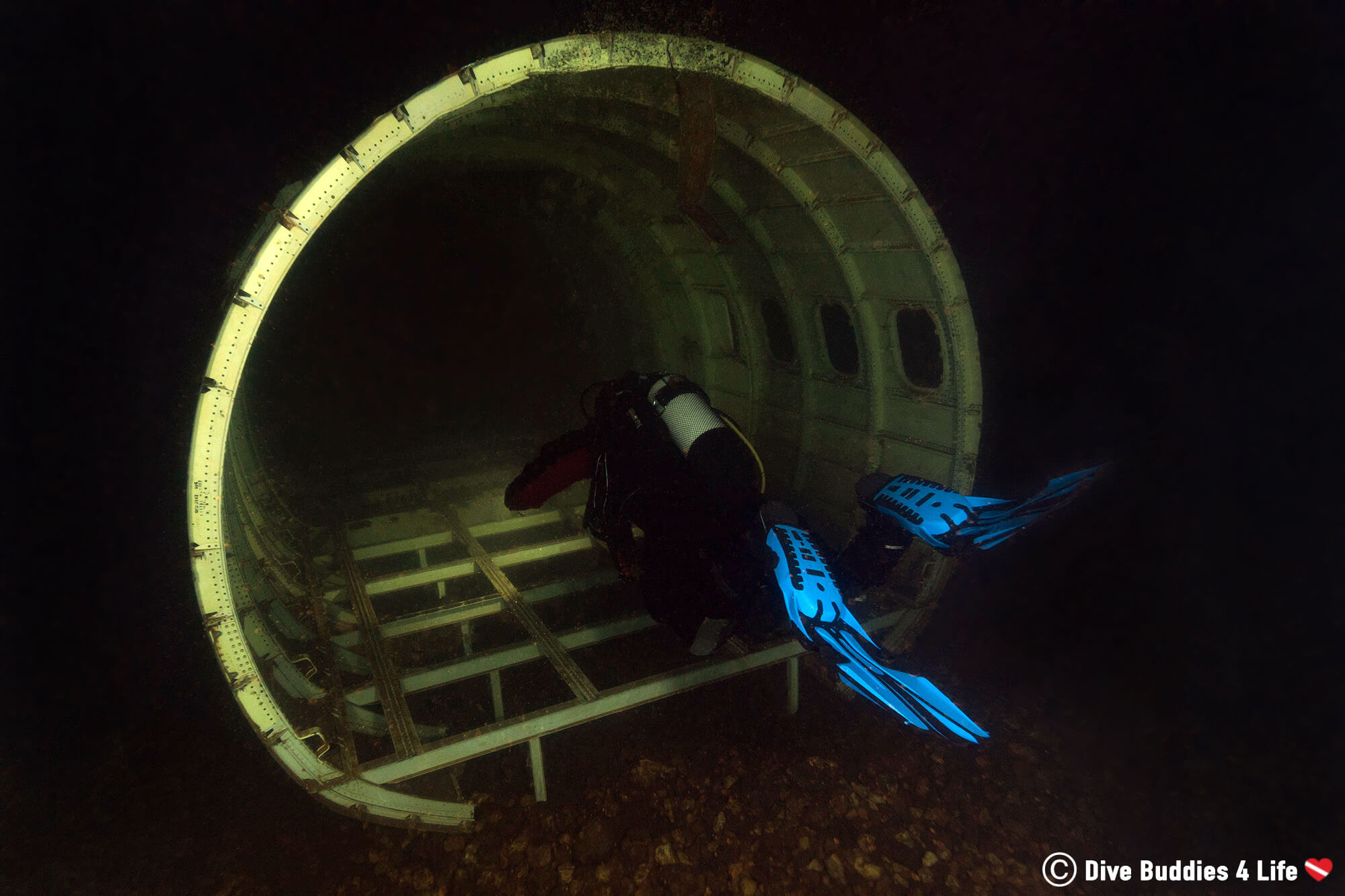 Given the temperature of the water, after about an hour of play-time in the Gas-o-meter diving facility, even in drysuits, we got a little chilled and decided to wrap up the dive. As we made our way to the exit, the Gas-o-meter has one other surprise in store for us.

No matter how old you are, and no matter how cold you feel, when you find a big green cow statue underwater you swim up to its side, throw one leg over its back and ride that baby. Yeeehaw!

So of course in spite of the cold, we stayed down for a little while longer imitating rodeo cowboys, before ending our Gas-o-meter dive and safely ascending to the surface. 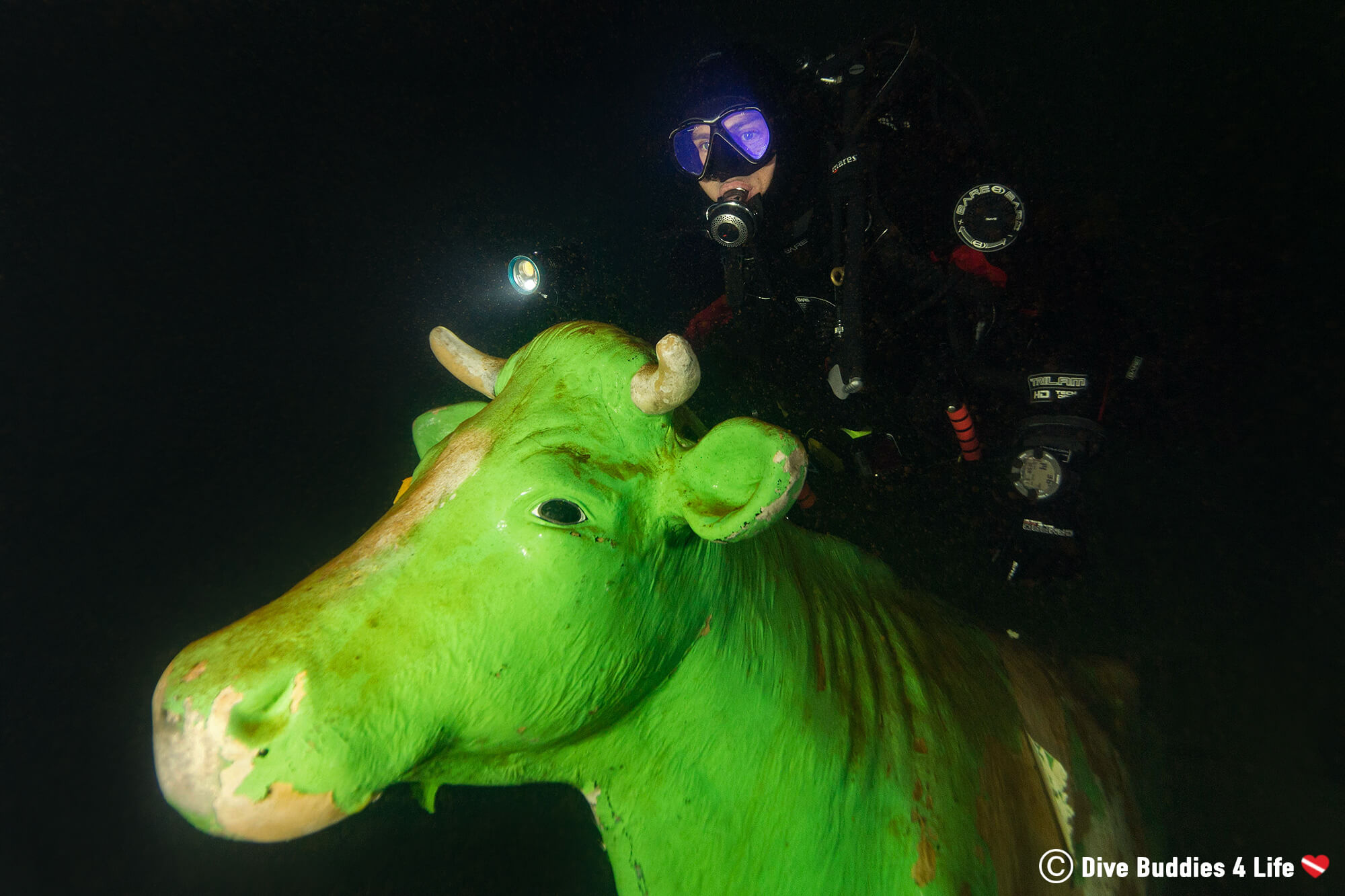 Germany is often neglected when it comes to scuba diving, but diving the Tauchrevier Gas-o-meter is certainly a place worth putting on the scuba diving map.

You probably don’t need much convincing but there’s an allure to exploring new waters and immersing yourself into a different environment. Germany’s Tauchrevier Gas-o-meter was a great cold water dive site that allowed us to step out of our comfort zone and try our fins at a different type of diving experience.

We loved how the cold dark water of the Gas-o-meter had so much to see in a relatively small area. It made for easy navigation and the feeling of adventure lurking around every corner. We were also glad we had brought our dive lights with us. The Gas-o-meter facility is located indoor and has limited lighting, therefore when swimming underwater it can be pretty dark.

It’s a humbling feeling to know that, no matter how big our logbooks grow, there is alway a strange new diving spot just waiting to be explored. The Gas-o-meter had a way of turning a regular dive in a regular location, into an extraordinary dive. 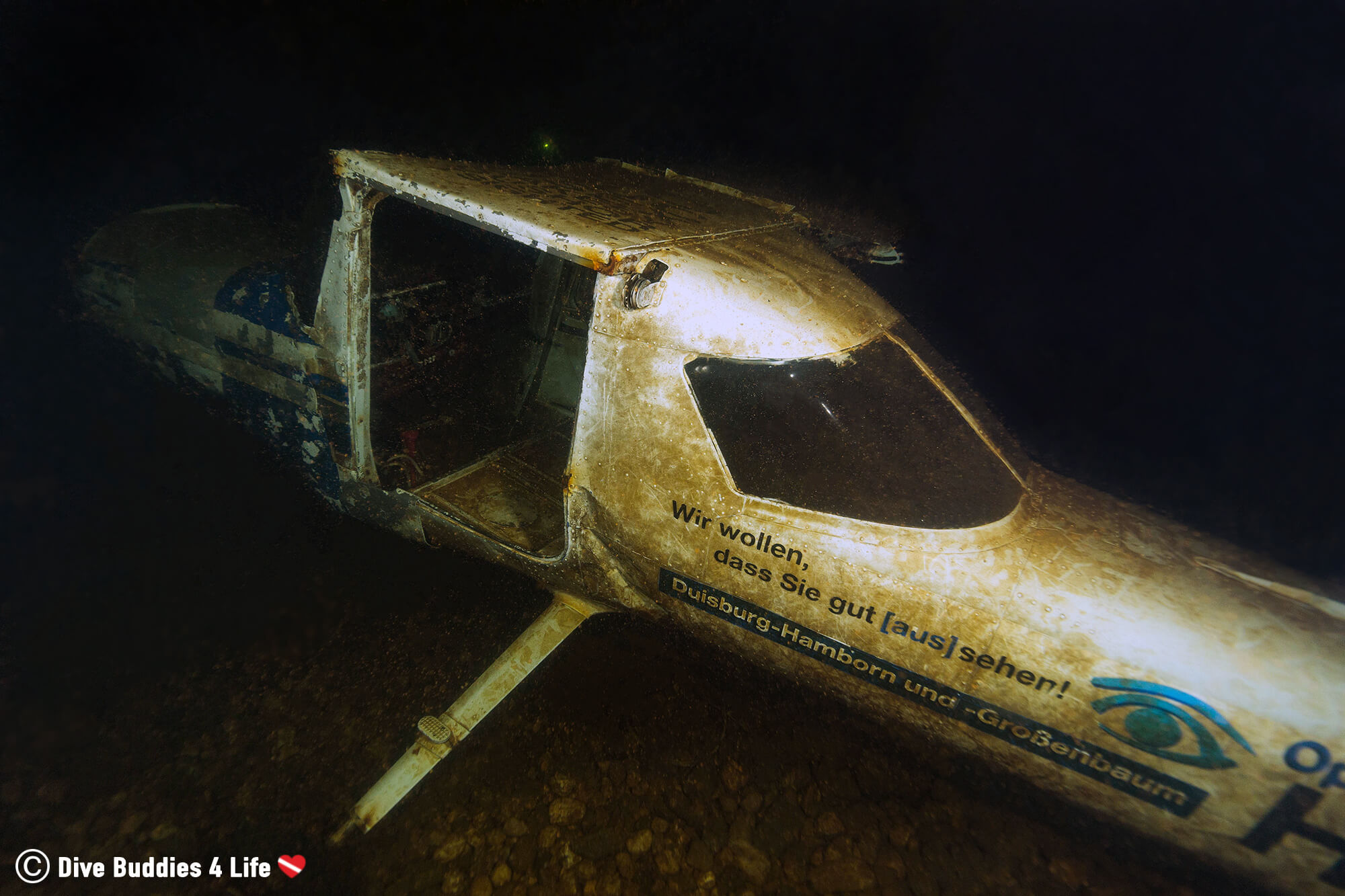 Have you ever visited and dived in a Gas-o-meter type facility? What was your experience like and would you do it again? 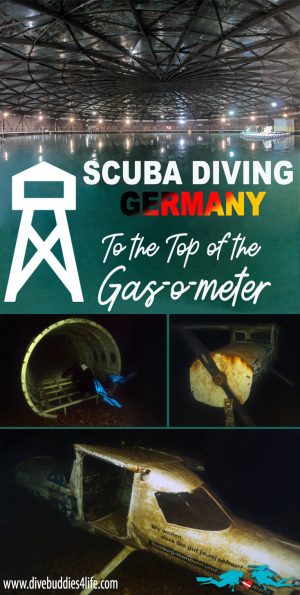