Diving Around the Amalfi Coast

There is a reason Italy is known as one of the top travel destinations in the world. The picturesque scenery, the ancient civilizations, the impeccably blue Mediterranean waters contouring the distinctive boot… For regular travelers it is considered a dream vacation; for avid scuba divers, it is pure bliss.

Every year, tons of tourists flock to Italy to enjoy the first-class beaches, vibrant culture, and world-class cuisine. But what they’re really missing out on is the supreme scuba diving. To date, some of my favorite diving sites have been in this part of the globe.

There are many different kinds of blue: the colour, the feeling and the ocean… can you guess which one is my favorite? #scuba #scubadiving #divinglicious #divebuddies4life #diving #underthesea #uwphotographer #tbt #throwbackthursday #traveltheworld #animals #seaside #ocean #mermaid #followme #travel #blogger

The marine protected area of Punta Campanella is located on the Sorrentine peninsula about 50 kilometers from the big city of Naples. Surrounded by the rich waters of the Tyrrhenian Sea, this peninsula is part of the Amalfi coast, a 40-kilometer region of Italy stretching between the Gulf of Naples and the Gulf of Salerno. The marine protected area includes some grotto’s, inlets and bays starting at Punta del Capo and ending near Punta Germano.

One of the most popular places to visit on this peninsula is the town of Sorrento due to its accessibility to the Amalfi coast and view of Mount Vesuvius.

Sorrento is a little of an unexpected diving destination. Most people go to the Amalif for the food and the beaches, but then when you see the water you just know it needs to be explored further. 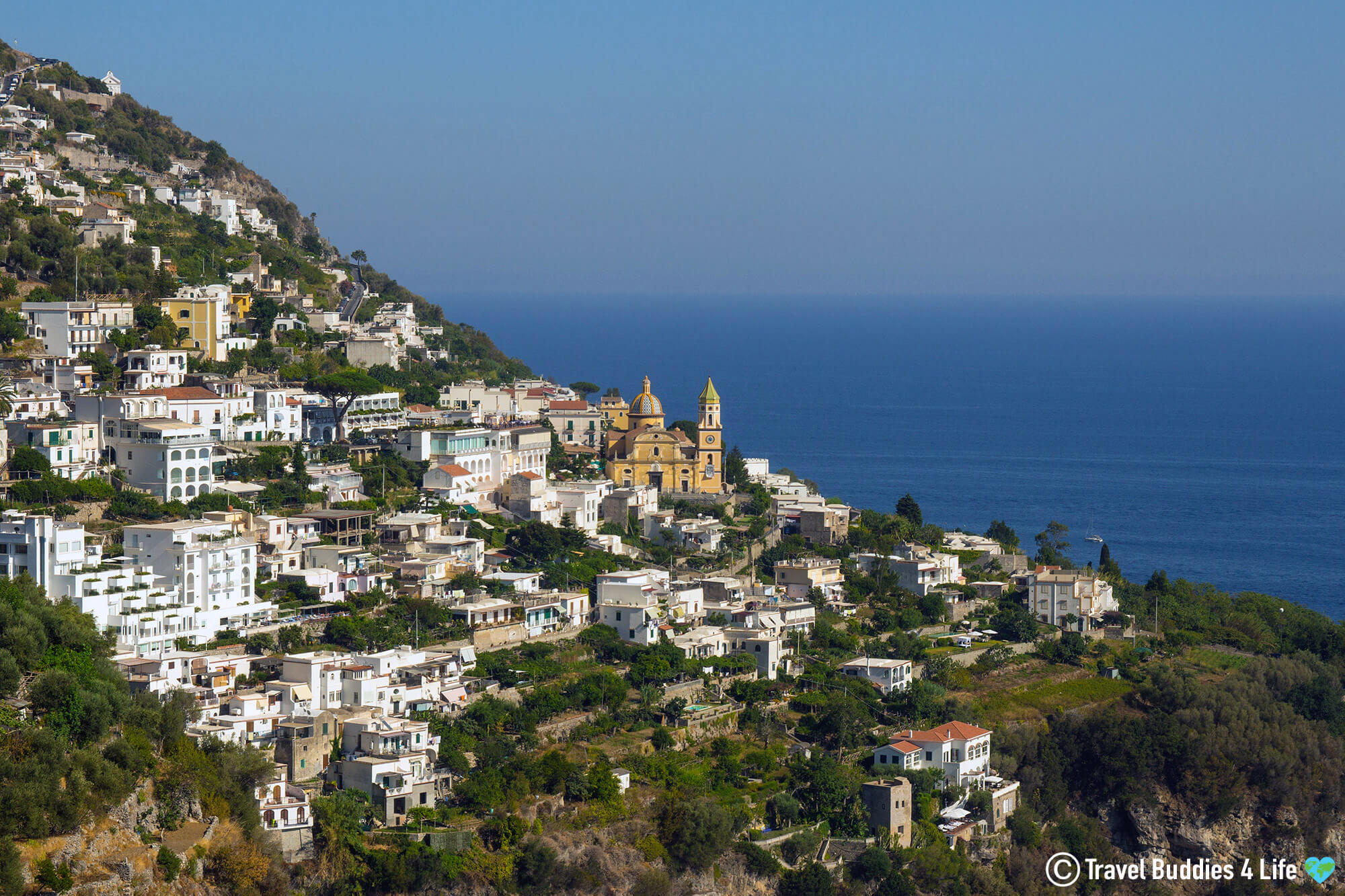 Dive Buddies Takes to the Water

All around Sorrento, there are diving opportunities big and small to be found. It took only one glimpse at the blue Tyrrhenian sea for Joey and me to get the scuba diving itch. After weaving through Punta Lagno’s maze of streets and dead ends, we finally arrived at the water’s edge ready for a much anticipated day of diving.

From the Punta Lagno harbour there are about 17 dive sites that can be explored by boat from this center. The dive sites range from plunging wall dives carpeted in marine life to dark and dismal cave dives forcing you to navigate cracks and crevices with only a flashlight. Today Joey and I would be dipping our toes into the cream of the crop; Vervece and Grotta dell’Isca.

To drive the #Amalfi coast is to witness #Italy's dramatic #coastline and sparkling sapphire water at it's best! #travel #italian #adventure

Getting Salty at the Rock of Vervece Dive Site

Like our other fellow divers along on the trip, before we took off from the harbor, Joey and I prepped our dive gear. Once everyone was ready, the boat headed out to the first dive. A mere five-minute boat ride from the shop, the Vervece dive site was visible right from shore. At first glance, Vervece may seem like just a small rock poking out of the water but don’t be fooled. This part of the gulf is an integral part of the Punta Campanella marine protected area thanks to strong currents and abundance of healthy marine life.

I was one of the first to roll off the boat and hit the fresh blue water at Vervece. Like clockwork, Joey followed with his GoPro in hand. As soon as the water enveloped me, I knew it was going to be a good dive. Just looking down from the surface the visibility was incredible. Still, nothing could have prepared me for the fauna that was waiting for us out in the blue of Vervece.

Our dive group was split into two different teams; the main group which was lead by one of the female divemasters and would be doing a few circles around the gigantic Vervece rock and Joey, myself and the shop owner diving for the sole purpose of finding the massive school of barracuda that is known to frequent the area.

On the Lookout for Barracuda

We started the dive descending 6 meters (20 feet) down to a sunken statue of the Virgin Mary. The religious figure was anchored to the bottom by a concrete slab and complete with hands brought together in prayer and a dainty rosary encircling her upper torso. The algae growth that covered her body lead me to believe that she had called this dive site her home for quite some time. 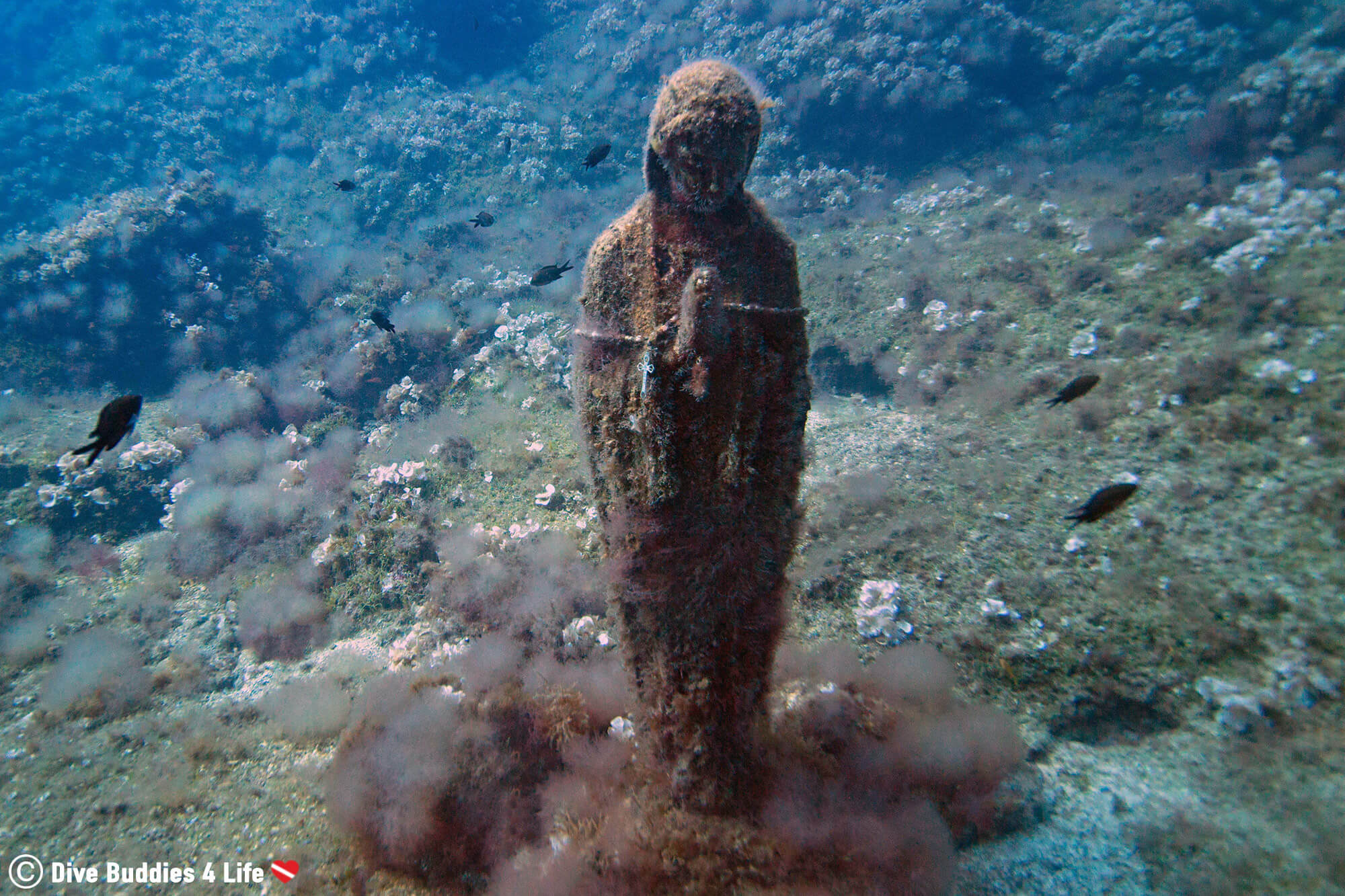 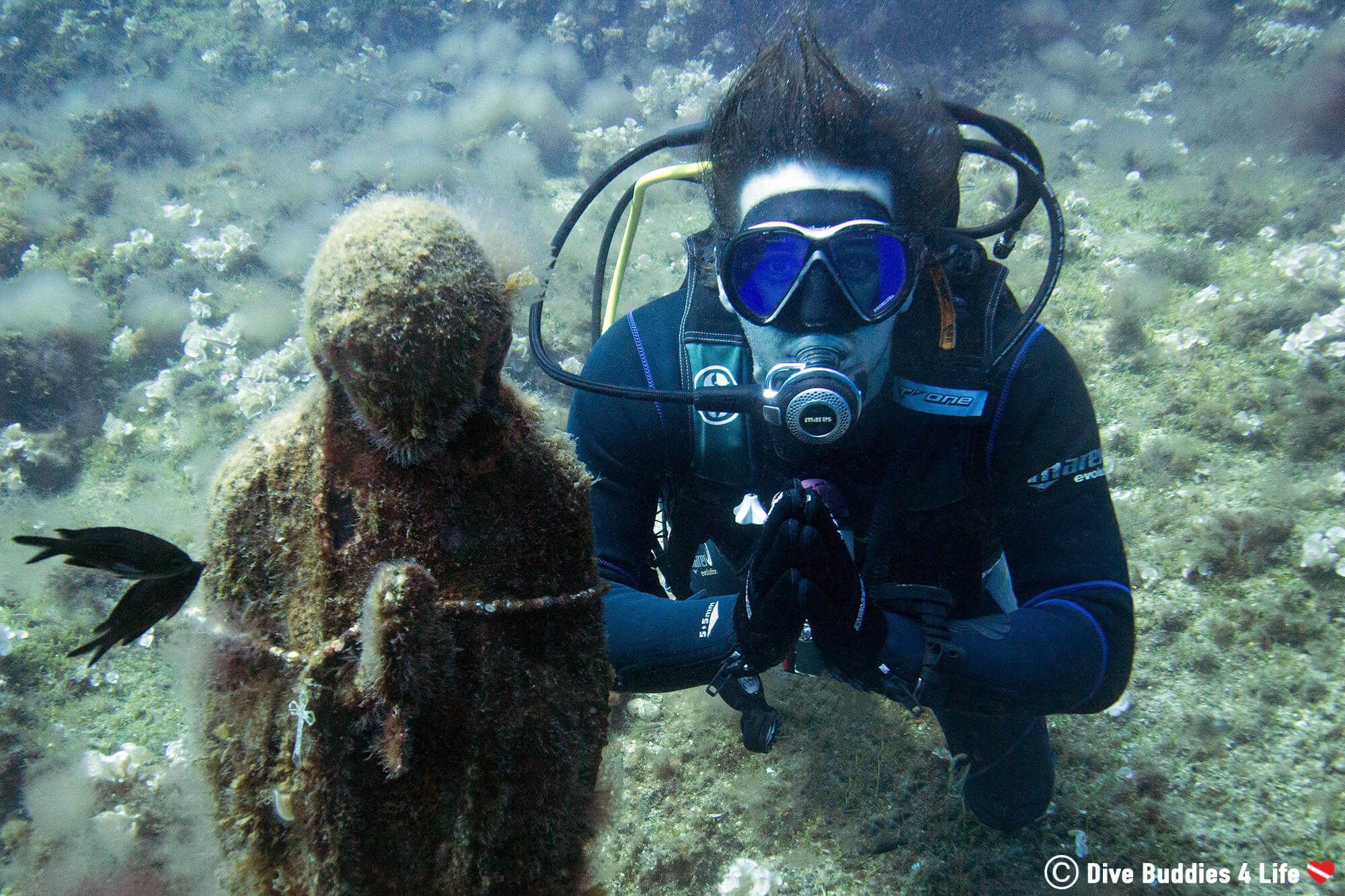 As we moved away from the statue and out into the open sea, fish were flying at us fast. The amount of damselfish was truly staggering. They filled the water like confetti on New Year’s Eve. It wasn’t just damsels either, so many groupers were sneaking around at the edge of my visibility, close enough to identify but too far for a good picture.

At a depth of about 21 meters (70 feet), we stopped following the bottom, which just kept plunging down, and headed towards the open sea. The divemaster told us at the beginning of the dive if the schools of barracuda were hanging out at this dive site there were two possible locations they would likely be, both places involved free-swimming out into the blue.

It must have been our lucky day because not even two minutes into our swim I caught sight of a few silvery arrow dynamic bodies in the distance. They were here! 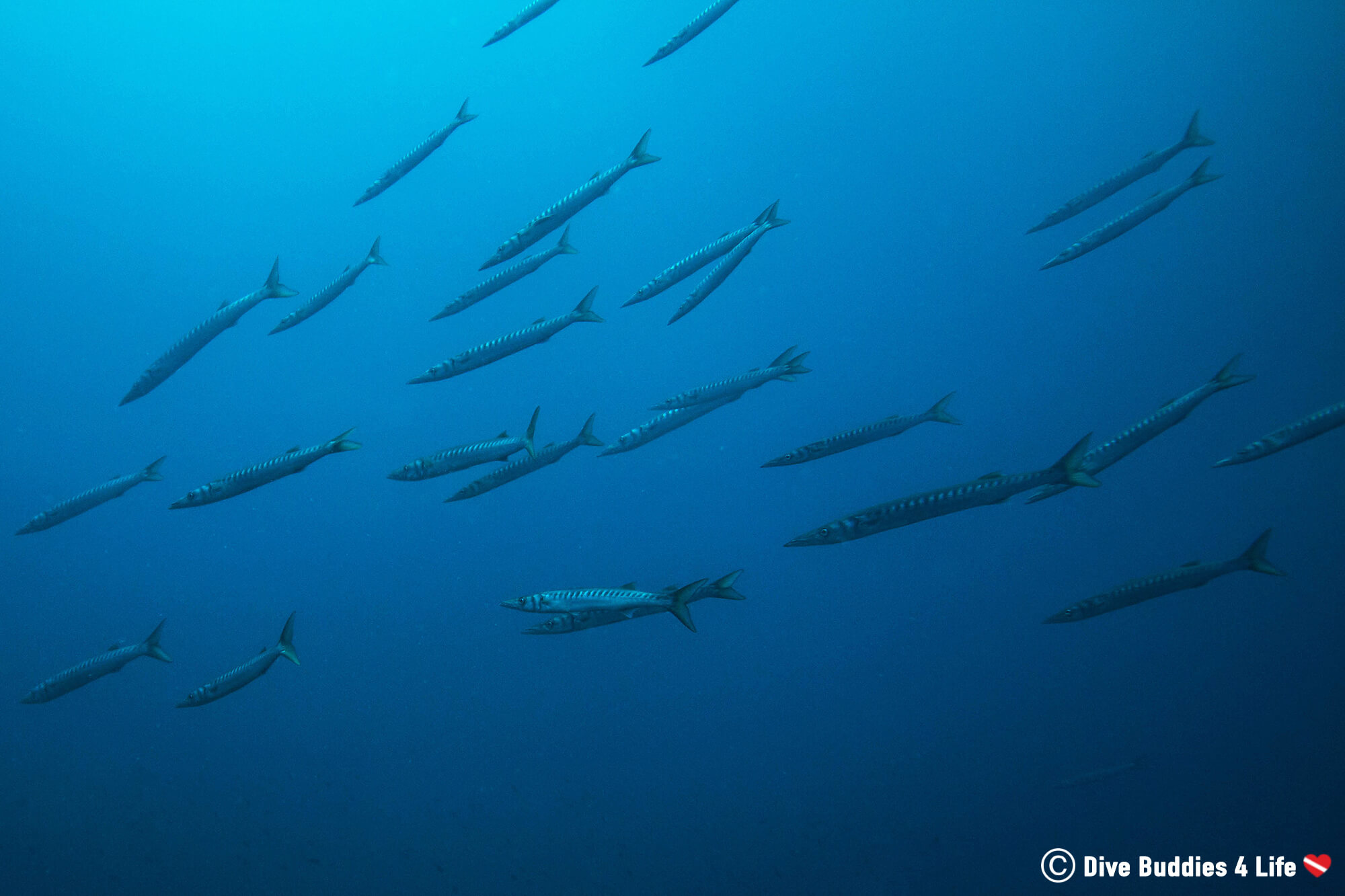 We followed the handful of barracuda from a distance and before I realized what was happening more and more started to drift into my line of sight. The next thing I knew we became surrounded by these magnificent creatures. I think I counted over 100 at one point all gliding along effortlessly through the water. The closer I got the more I realized how big these predatory pelagic fish were. I think the largest one I saw was about 1 meter (3 feet) long. 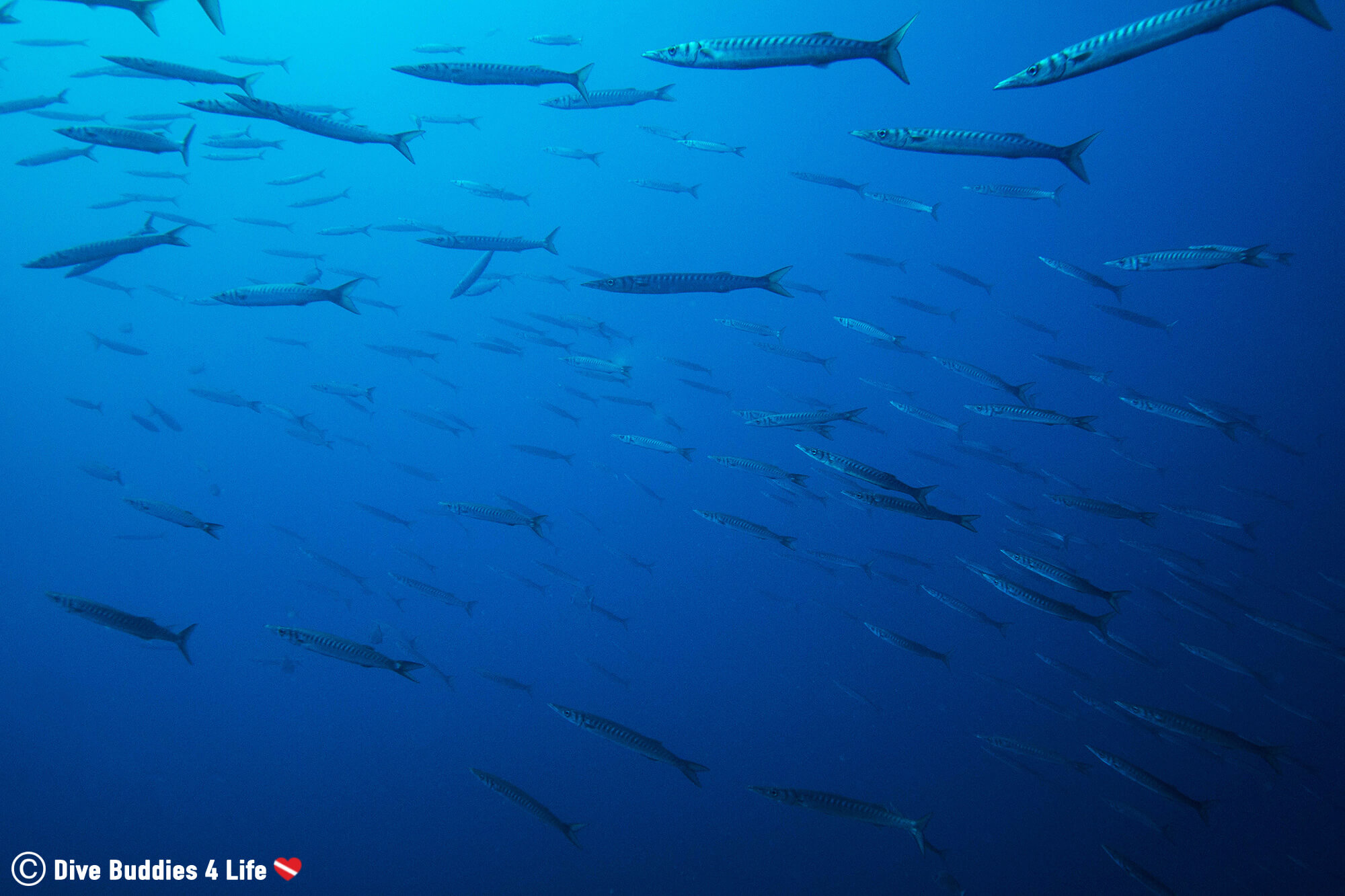 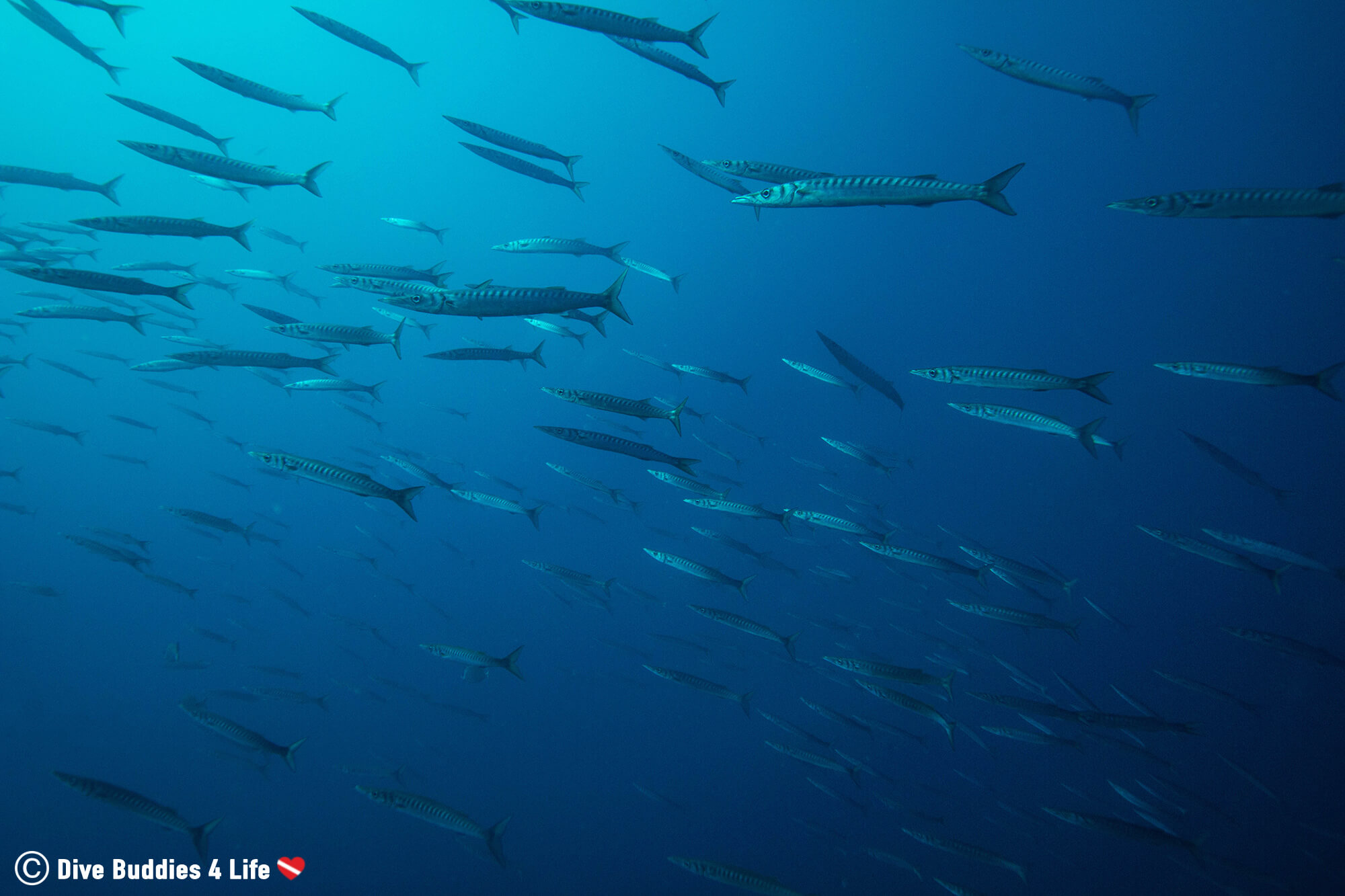 Contrary to what a lot of people believe the school of barracuda we dove with were shy and skittish creatures. As much as I tried to approach them, they never let me get closer than 2-3 meters (7-10 feet).

Interesting Fact: Barracudas can swim at the speeds of up to 25 miles/hour (40 kilometers/hour) useful for both hunting and escaping predators.

I had so much fun playing follow the leader with the school of angry looking barracuda that I could have sprouted gills and stayed there all day. But as our tanks slowly emptied it was time to bid them adieu and head out of the open water back to Vervece Rock where were would do our safety stop and locate the dive boat. Talk about ending our Vervece dive on the right fin! 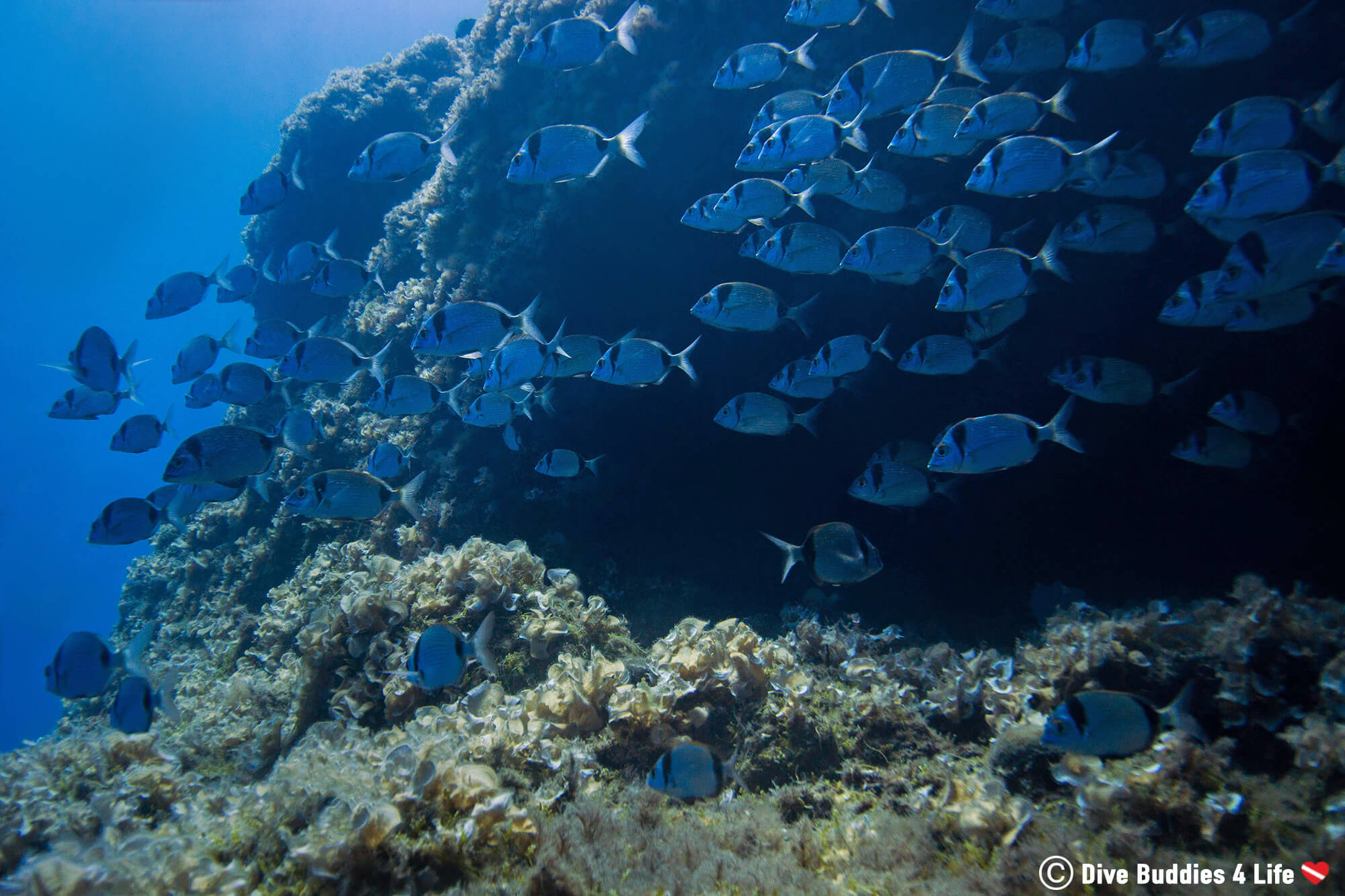 Into the Darkness of the Grotta dell’Isca Dive Site

From the Vervece dive site, we headed south towards the point of the Sorrentine peninsula. Our next stop was the Grotta dell’Isca or Isca Caves (as the non-Italians like to call it), a stalagmite filled cave just waiting for exploration. It took us about 30 minutes by boat to reach the Grotta situated beneath sea level under the Homonym Island.

Once again we had fabulous visibility everywhere we turned our mask. I felt like a Mediterranean mermaid. 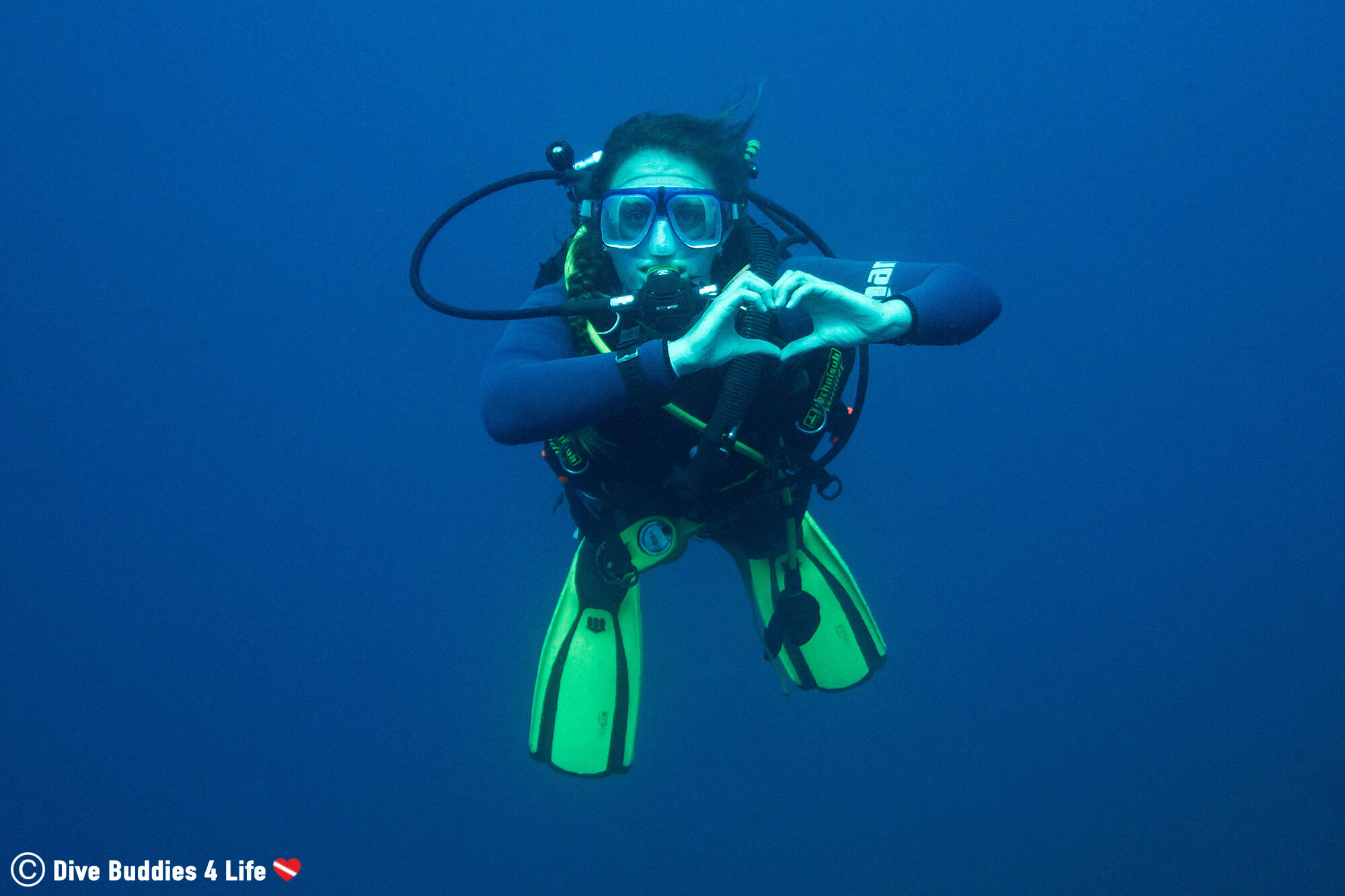 Going from swim-through cave to swim-through cave, we admired the silhouettes of other divers in front of us. Their profiles resonated against the vivid blue of the sea as we exited the tunnel on the other side. Colorful fish were darting this way and that way with no set path in mind. I finned by huge rocky walls sweeping from the rough surface into the depth. The walls were coated to the nines in colourful sponges and green and red plant life. For two scuba divers who have done most of their diving in Canada, it felt like heaven on earth.

Before long our scuba group made it to the main cave. We gracefully swam into the jet black tunnel, careful not to stir up any of the silty bottom sediment. Slowly and by the beam of our flashlights we surfaced in the heart of the cave and were greeted with a ceiling covered in long, dripping stalagmites. 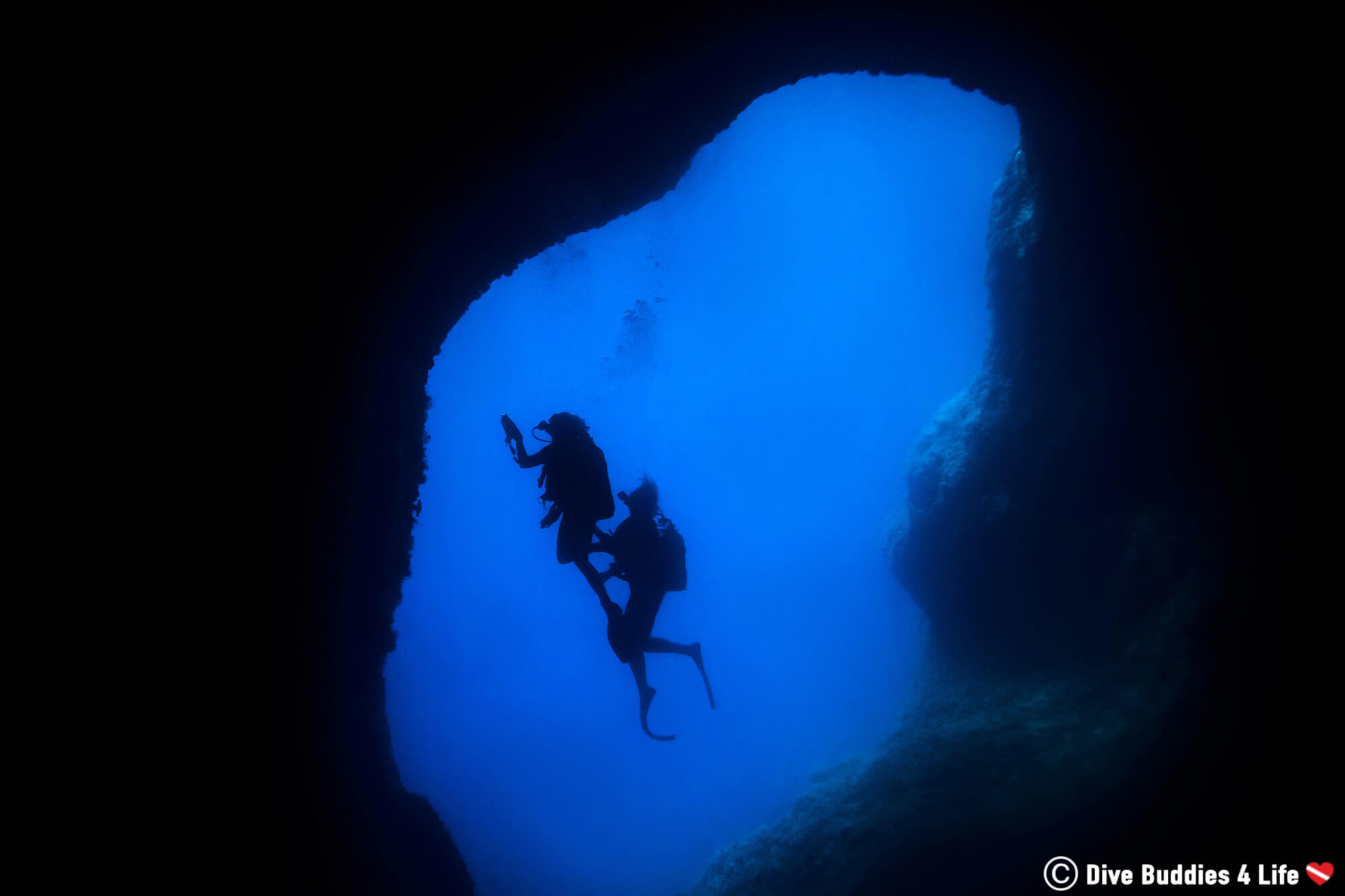 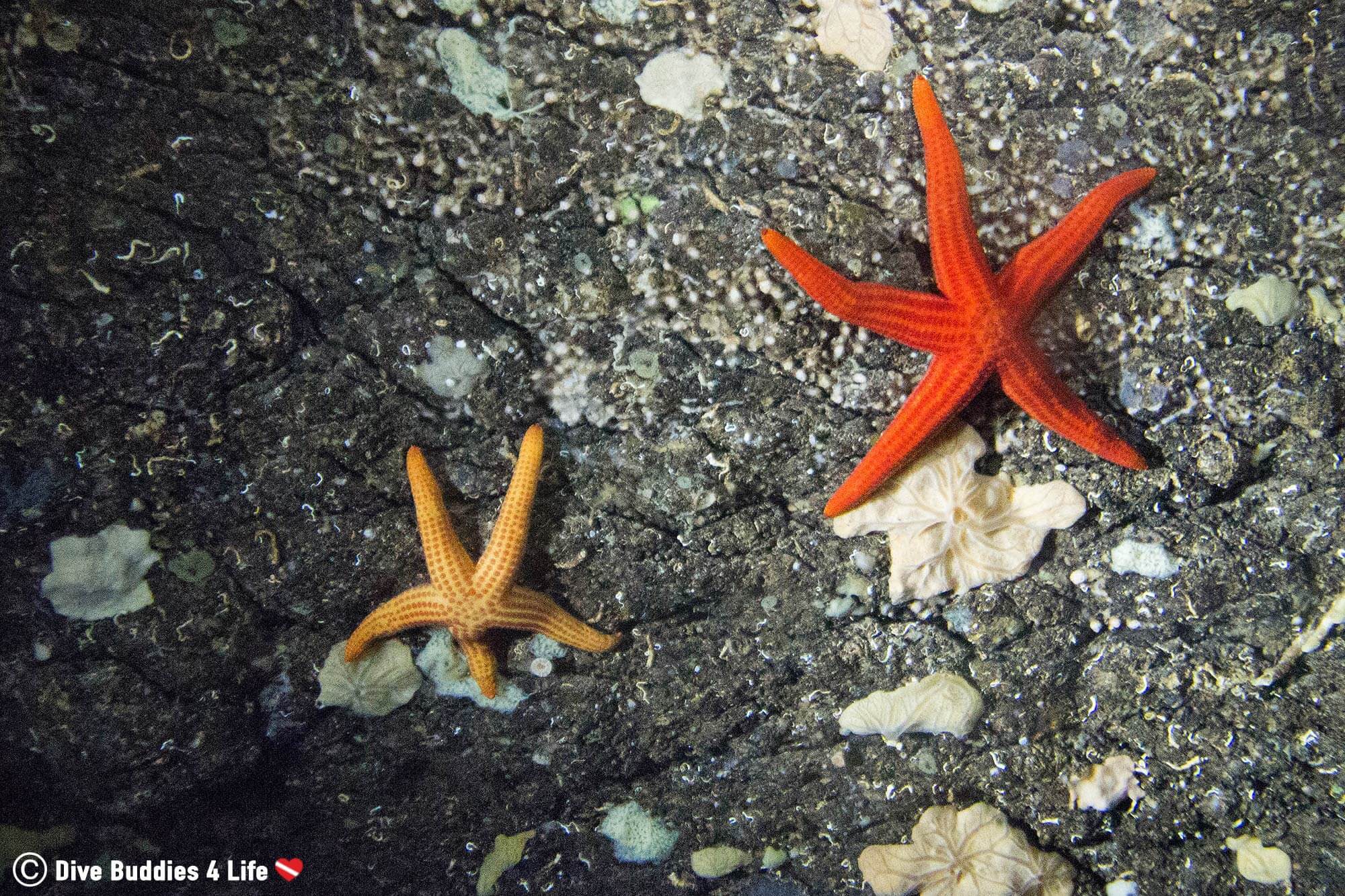 Joey and I inflated our BCD’s and floated like to buoys in the ocean, gazing up at the massive dome. There was something about the black stillness of the cave that had us under its spell. After 15 minutes of floating and gawking it was time to exit the confines of the cave.

On our day of diving with Punta Campanella, I was treated to several first-time species sightings, but the highlight was hands down seeing my first big school of barracuda. 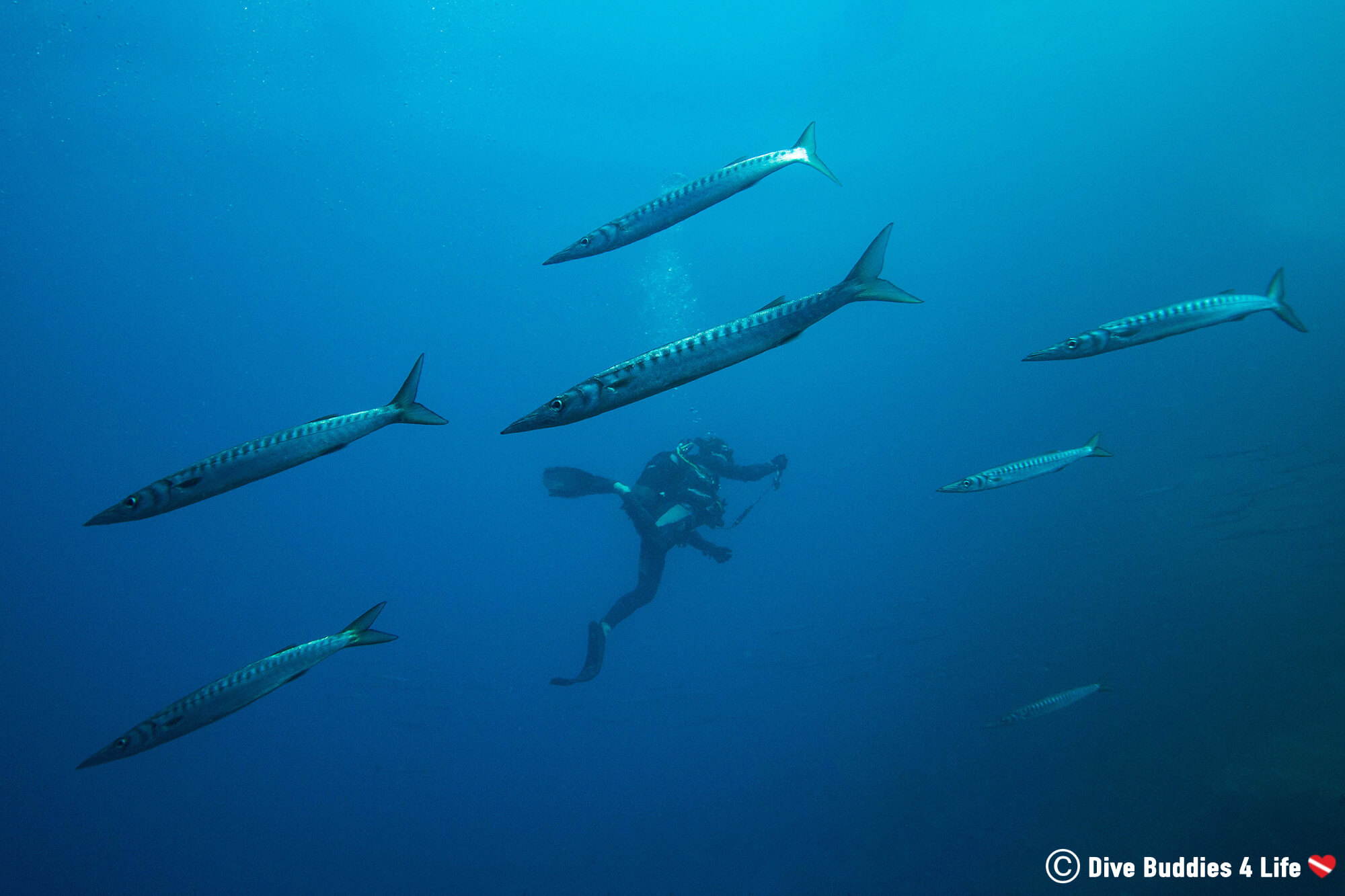 When it was finally time to return topside, Joey and I swam slowly back towards the boat. I can’t say I was ready for the dive to be over.

Punta Campanella may be a lesser-known Italian dive destination, but after spending a day diving in this neck of the woods, I can say that this spot packs quite the diving punch. From diving in giant shrimp filled caverns to swimming with fearsome barracuda, the clear blue waters of the Amalfi coast was second to none. To this day it has been my all-time favorite dive spot.

Divers, do you have a favorite Italian scuba diving site to share? Let us know below, we’d love to explore and write about it 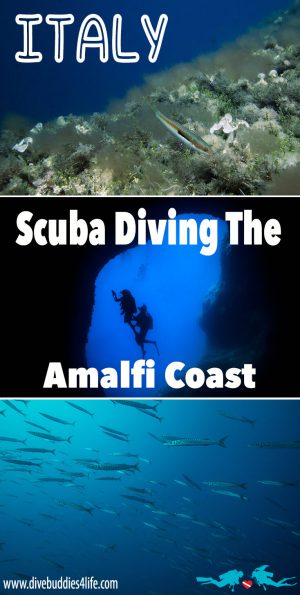