Slovenia: Diving in an Underwater Playground

Scuba Diving from the Shores of Piran

Our scuba diving adventure in Slovenia was the perfect balance between organization and spontaneity. We knew we wanted to hit the water during our short six-day stay in the small town of Isola, but we had a hard time finding a dive center that was open on the only Sunday we had available for diving.

Needless to say, we were pretty pumped when Sharkey Dive Center in Piran came through! 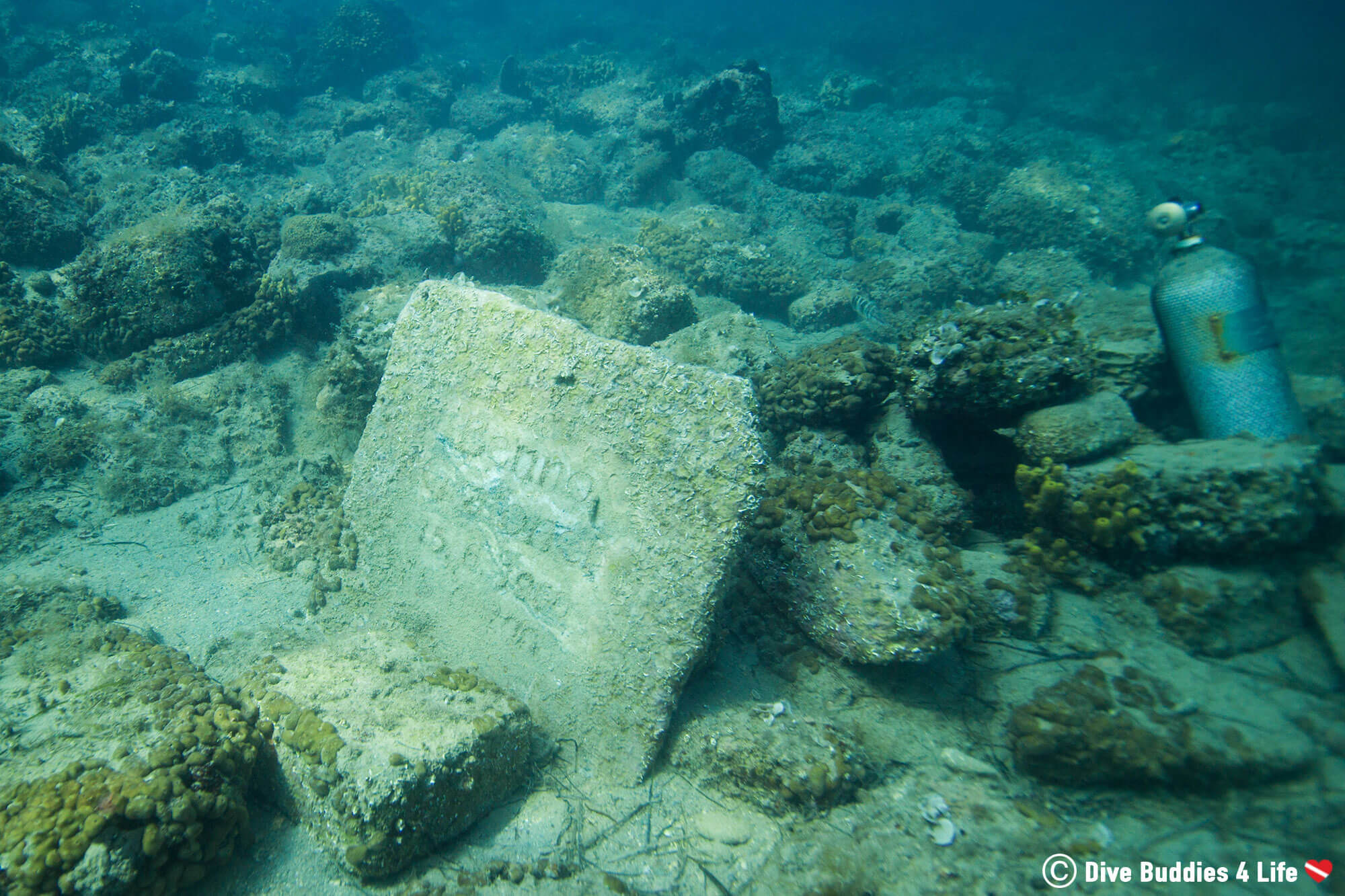 Sharkey Diving Center is a small dive shop located on the shores of a pretty good diving site in Piran – the Fiesa Reef. The shop is in a shipping container on the property of the Fiesa Hotel and well equipped for any scuba diving needs.

There is no parking immediately on site. If you’re a heavy packer like us, when you first arrive (hopefully with two people) leave someone with the car while the other heads 200 meters down the pedestrian pathway to the shop. At the shop, you will be able to borrow their dolly for ease of gear transportation. Otherwise, if you aren’t traveling with dive gear, the dive facility is well stocked to rent.

Once you’ve unpacked ask one of the staff members and they will help direct you to the appropriate parking place. 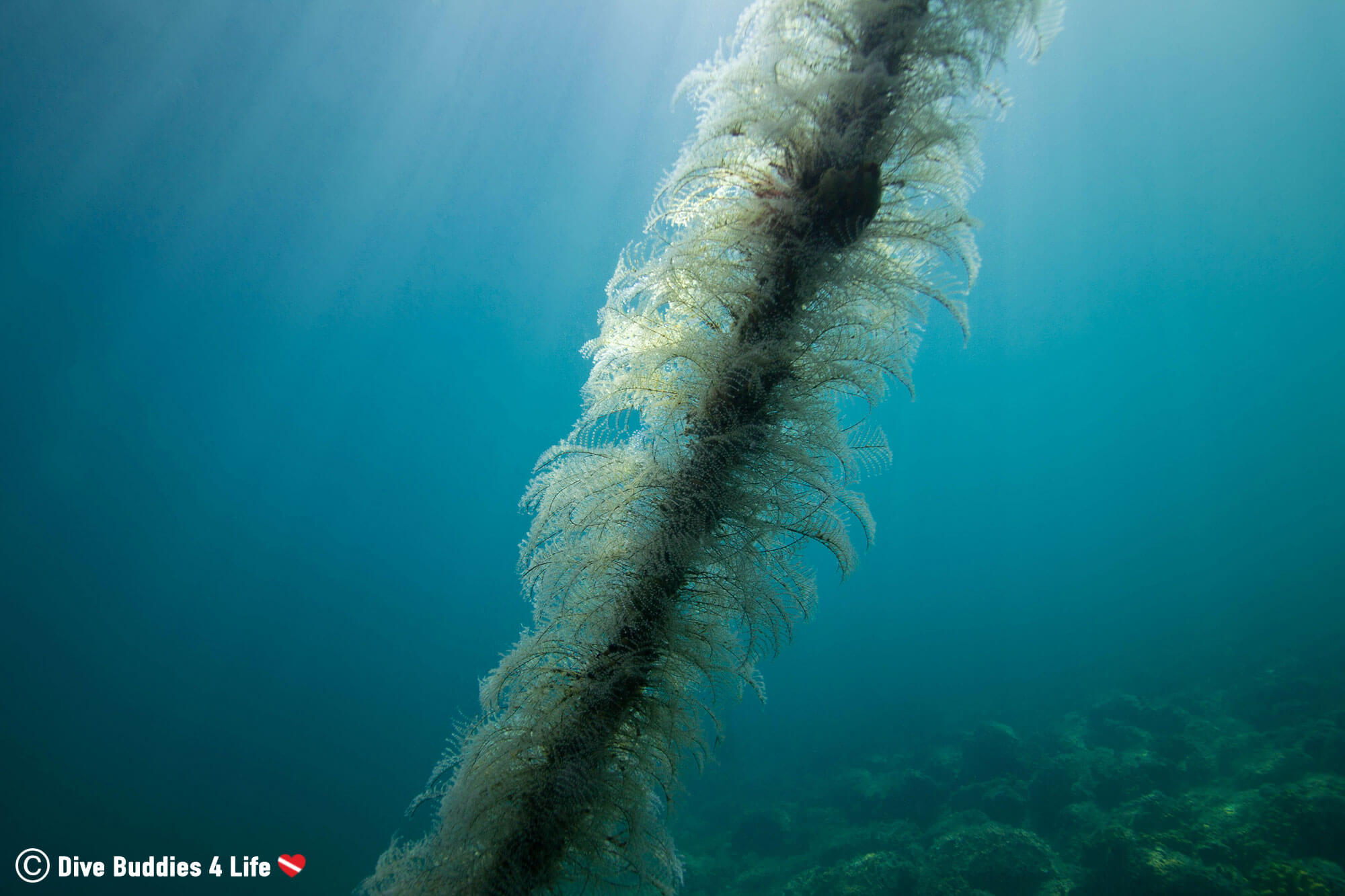 Shore Diving into a Slovenian Playground

Joey and I arrived bright and early on our Piran dive day, not too sure what to expect in terms of underwater adventures.

After parking, renting and assembling all our gear, the shop owner gave us a quick orientation of the dive site, as we would be heading off on our own. The map he showed us was very detailed, right down to the compass heading and fin kicks. From wrecks and reefs to seagrass beds, statues, and even a sunken car, there was a pretty big underwater playground in this neck of the woods. It was certainly above and beyond what I expected.

Eager to get in the water and explore all these sunken treasures, we rapidly suited up and waded out into the sea.

Once we had submerged into the gentle rocking of the Mediterranean sea’s waves, I followed Joey’s fins. He decided to start our dive by heading right out towards the deeper part of the reef and hunt out the sunken car.

Alternatively, if we had begun our dive by heading left, we would have headed towards a barren seagrass bed to search out the ever-elusive Long Snouted Seahorse (Hippocampus ramulosus). But alas, right it was! 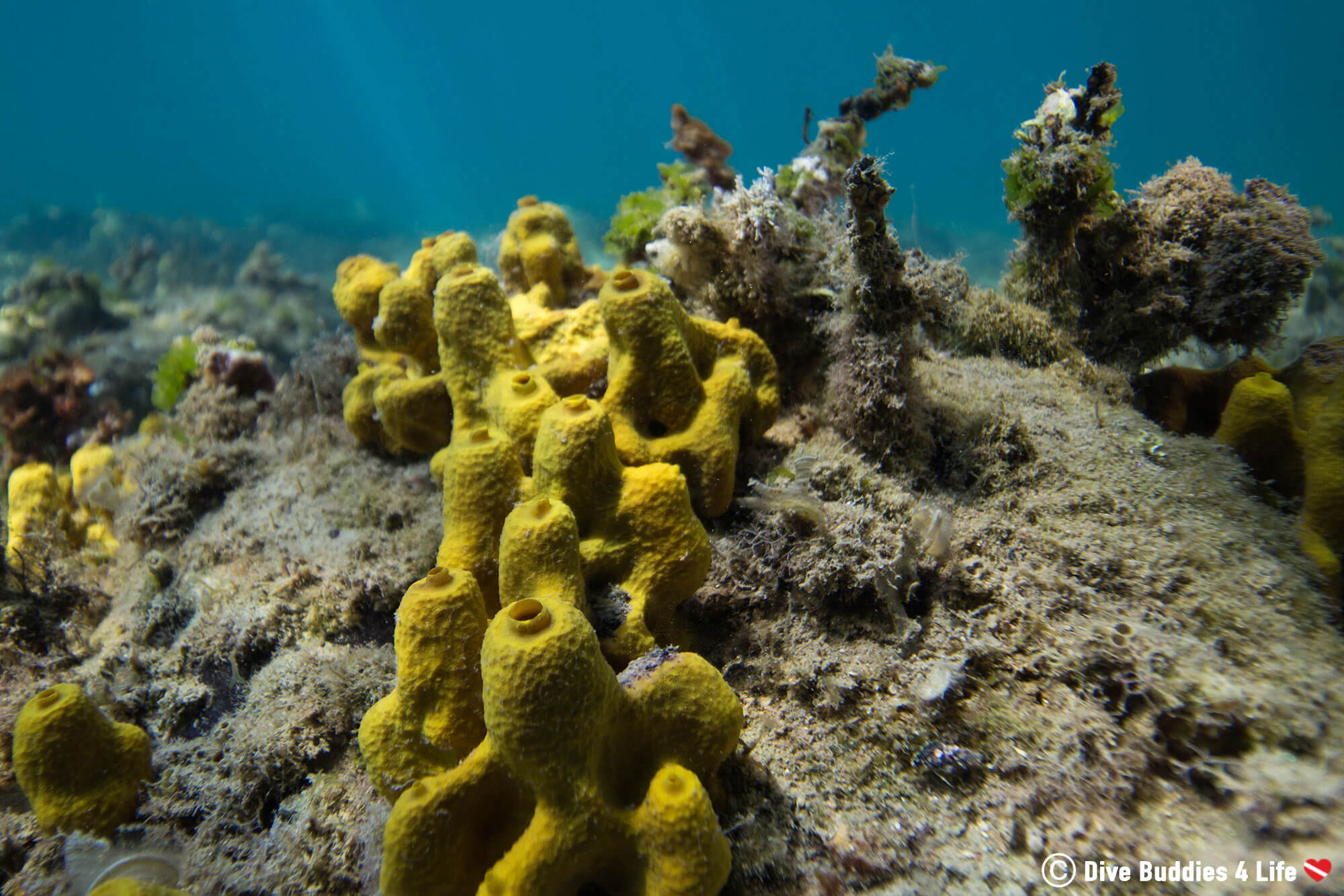 Like in Croatia, Montenegro and a few of the other places we had previously dived in, Joey and I expected to see much of the same marine flora and fauna on Slovenia’s small stretch of Adriatic coastline. And we were right, the gobies, damselfish, blennies, anemones, sea stars and crabs were plentiful.

But there was more than just our classic sightings. Slovenia’s marine life got much more exciting.

As we swam over Fiesa Reef I caught sight, out of the corner of my mask, of my first ever wild cuttlefish floating in the sea all big-eyed and iridescent. What a stroke of good luck! 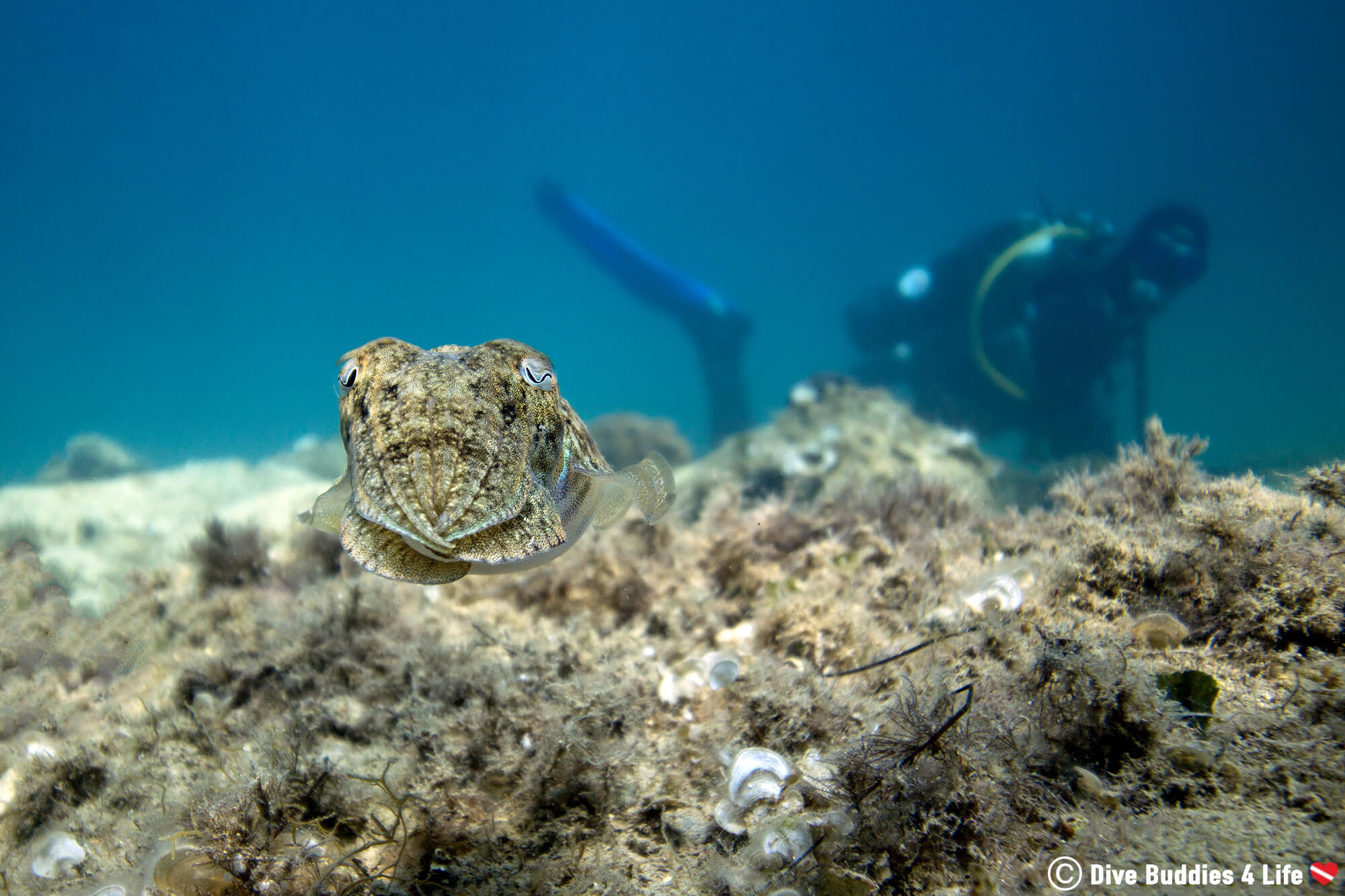 Because you can just call out underwater, like you would be able to on land, it was hard to initially get Joey’s attention without spooking the cuttlefish. But when I finally did and signaled towards our new found friend, Joey was back at my side in a flash.

Having worked with cuttlefish during my employment stint at an aquarium, I have come to know these adorable creatures as pretty skittish cephalopods. The species we found was a European cuttlefish (Sepia officinalis) and the little guy was about the size of my hand. We watched and patiently waited to gauge it’s behavior and fear level.

Much to my surprise, the cuttlefish was positively fearless, definitely not what I expected. As I readied my camera and crept in for a picture he came right up curious and intrigued. As I snapped photo’s, using the natural light from the sun, I watched as he shifted colors going from brown to white to zebra patterned all at the drop of a dime.

From my background in marine biology, I knew that this ability to rapidly change pigmentation and blend in with the environment comes from a specialized cell called a chromatophore.

We spent easily over half of the dive just swimming around with this friendly and curious cuttle. So far our dive day was brimming with good fortune. At one point, during our cuttlefish interaction, Joey had his hand out and the cuttlefish was inches away from grabbing ahold of his fingers with those suction cup-covered arms.

Eventually, the cuttlefish seemed to get bored of us two divers and casually drifted away into the blue waters. That was our cue to head onward and forward to the many other Piran attractions. 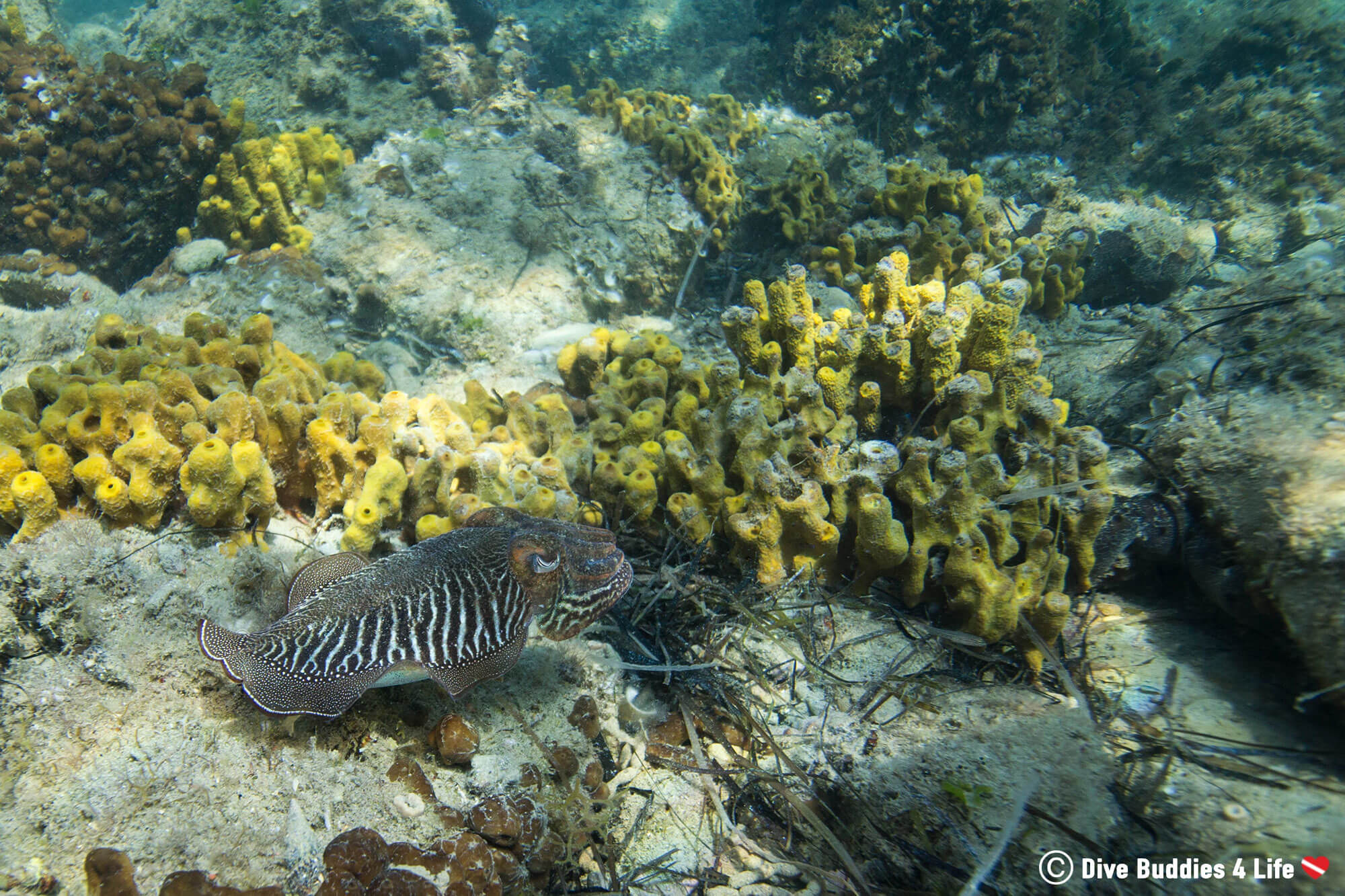 Joey and I swam on and arrived at the edge of the busy reef. Here the depth descended several feet and bottom turned from rock to sand.

Like underwater trailblazers, we followed the meeting point of sand and rock until we arrived at an expanse of giant clams half buried in the sand. This bed of clams was like a mini-maze and was essentially gigantic one-foot-long clams anchored vertically in the water and semi-buried in the sandy bottom. Their appearance reminded me so much of tombstones that I christened this place “The Clam Graveyard.”

Swimming through “The Clam Graveyard”, Joey and I found many crabs mounted on the clams picking away at their exterior. What a bunch of ravenous scavengers.

Not long after we left “The Clam Graveyard” in our wake, did the cutest little sunken car materialized out of the blue. Finally we found what we had been looking for!

The old sunken car looked very odd amid the watery backdrop. As we swam closer to the automobile I noticed that the windows were removed and the back seats missing.

I could also see the years of marine growth etched on the car’s metallic frame, giving it an artificial reef like appearance. It wouldn’t be long before nature had completely claimed this vehicle as its own. 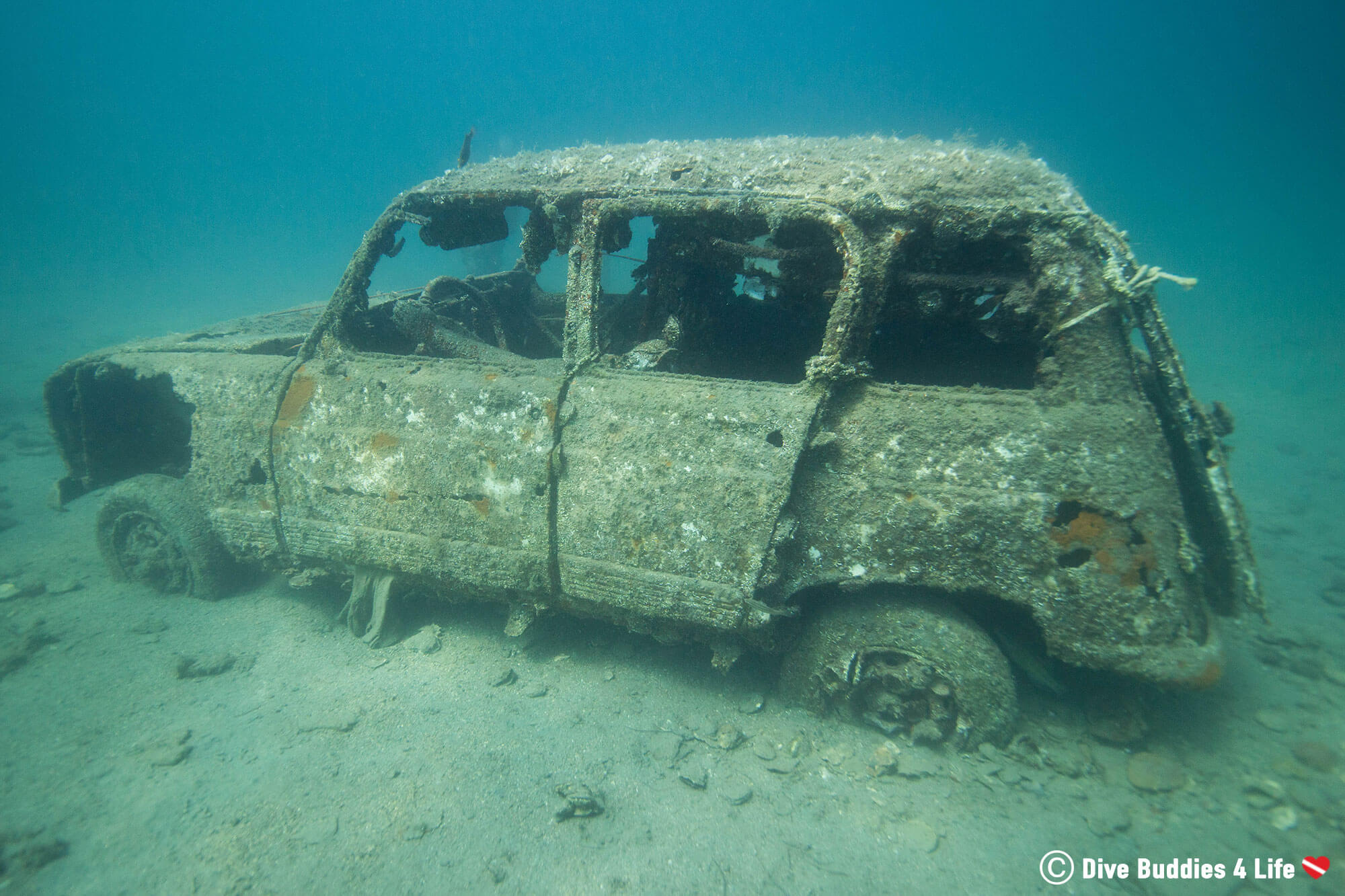 Joey and I bottomed out our dive at 11 meters (32 feet) as we moved on from the submerged car to further check out a small sailboat wreck at the bottom of the cove. As cool as it was to see these sunken boats, nothing compared to the underwater car. Regardless, that didn’t stop us from scouring the wreck for cryptic critters, hoping to find a seahorse or two. Unfortunately, we came up empty-handed. 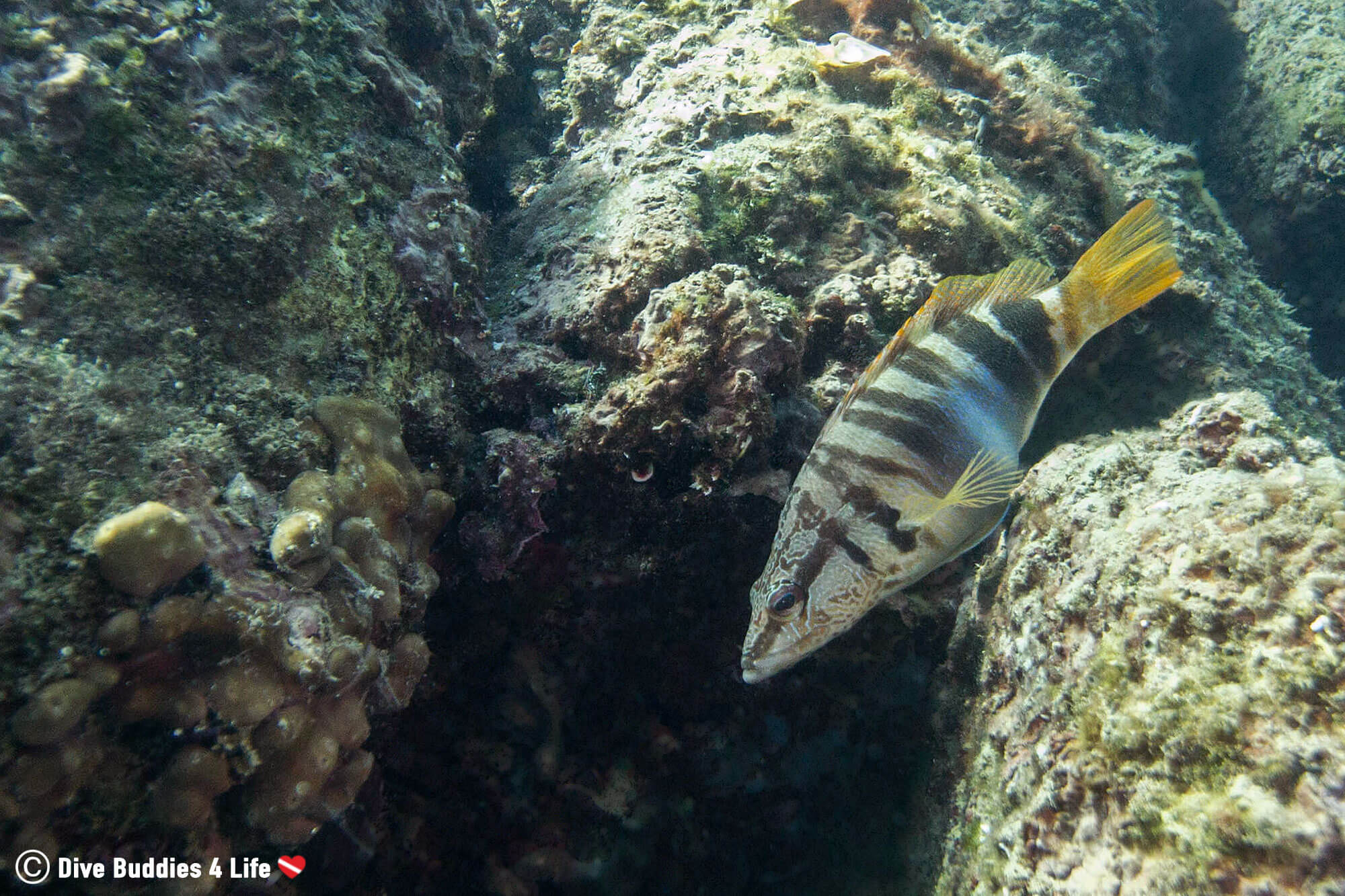 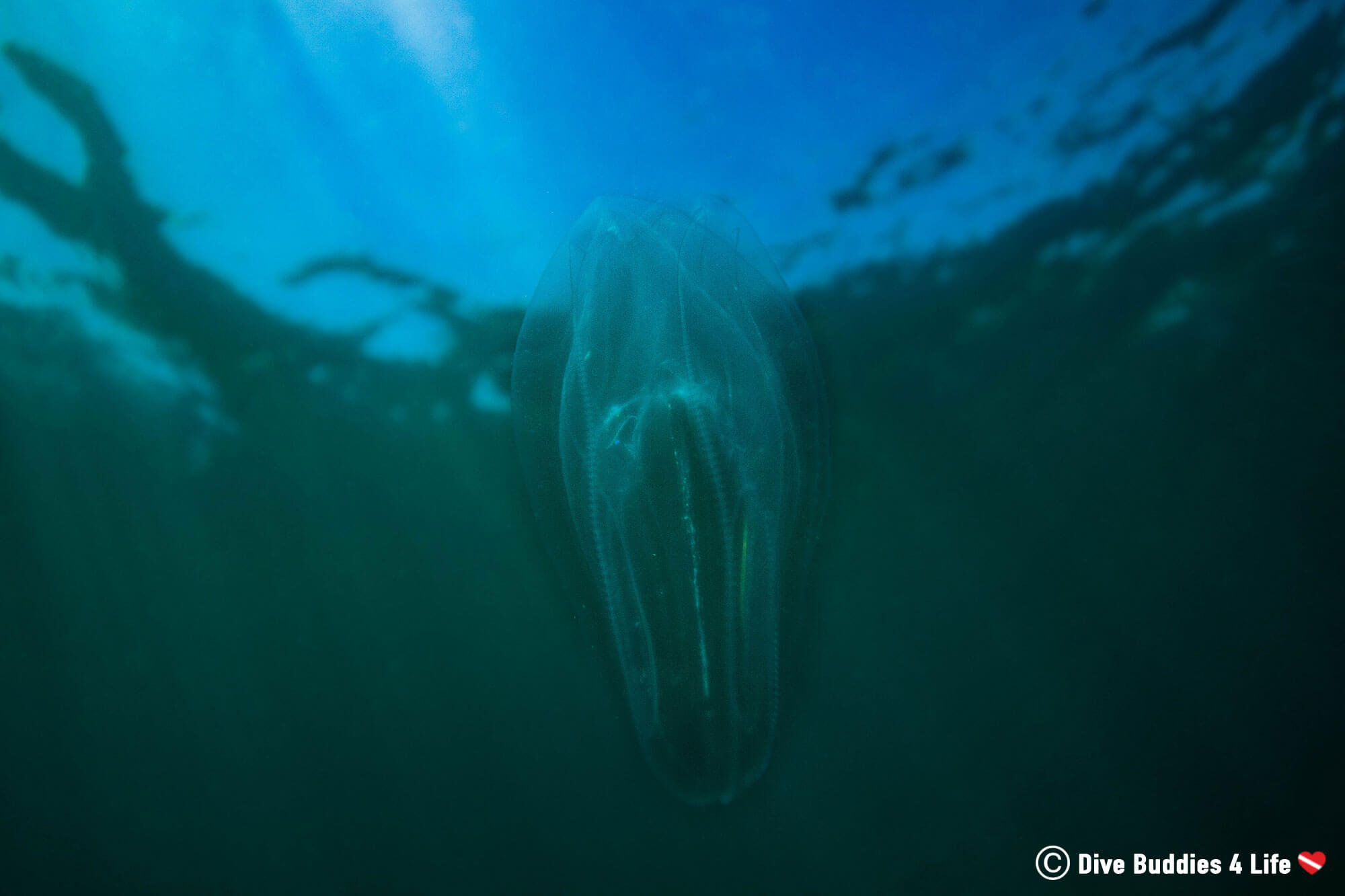 Back into the Slovenian Sea

After some of the neat animal sightings on our first dive, Joey and I hardly expected to have the same luck. But guess what? We were very wrong! Shore dives two and three were even more successful on the animal sighting front.

On top of the Piran regulars – gobies, wrasses, damsels, congers, sea perch, and more cuttlefish – we also got to look at some adorable tiny nudibranchs and a huge slimy predatory sea slug (Tethys fimbria). The Tethys was creepy-crawling on the bottom of the ocean floor like a vacuum cleaner scouring the area for unsuspecting prey. It was awe-inspiring to watch this rare-a-find animal in action. I felt downright spoiled! 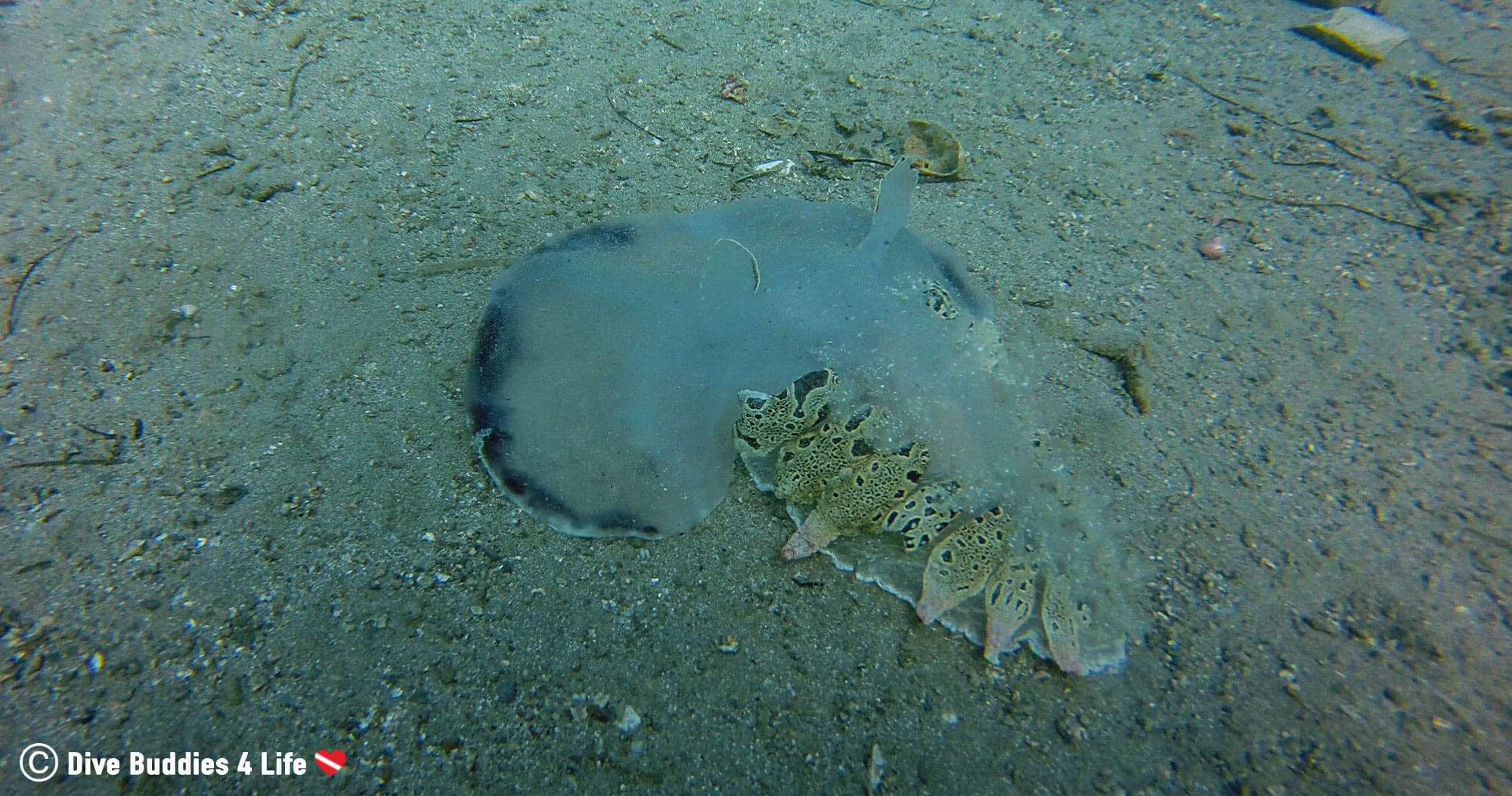 Interesting Fact: Tethys fimibria may look like nothing more than a dead jellyfish or slimy plastic bag, but they are in fact the largest sea slug in the Mediterranean growing as large as 30 centimeters.

If I wasn’t dumbfounded by our magnificent predatory sea slug encounter, Slovenia’s underwater scuba scene threw another curve-ball our way. This curve-ball took the form of a beautiful jet-black seahorse, curly tail and all. I found it at the very end of our last dive sleeping on the mucky bottom of a seagrass bed. I had been hell-bent on finding one since diving in Croatia and this find left me beyond elated. It was a grinning from-ear-to-ear kind of moment!

What a way to end our dive day in Piran. 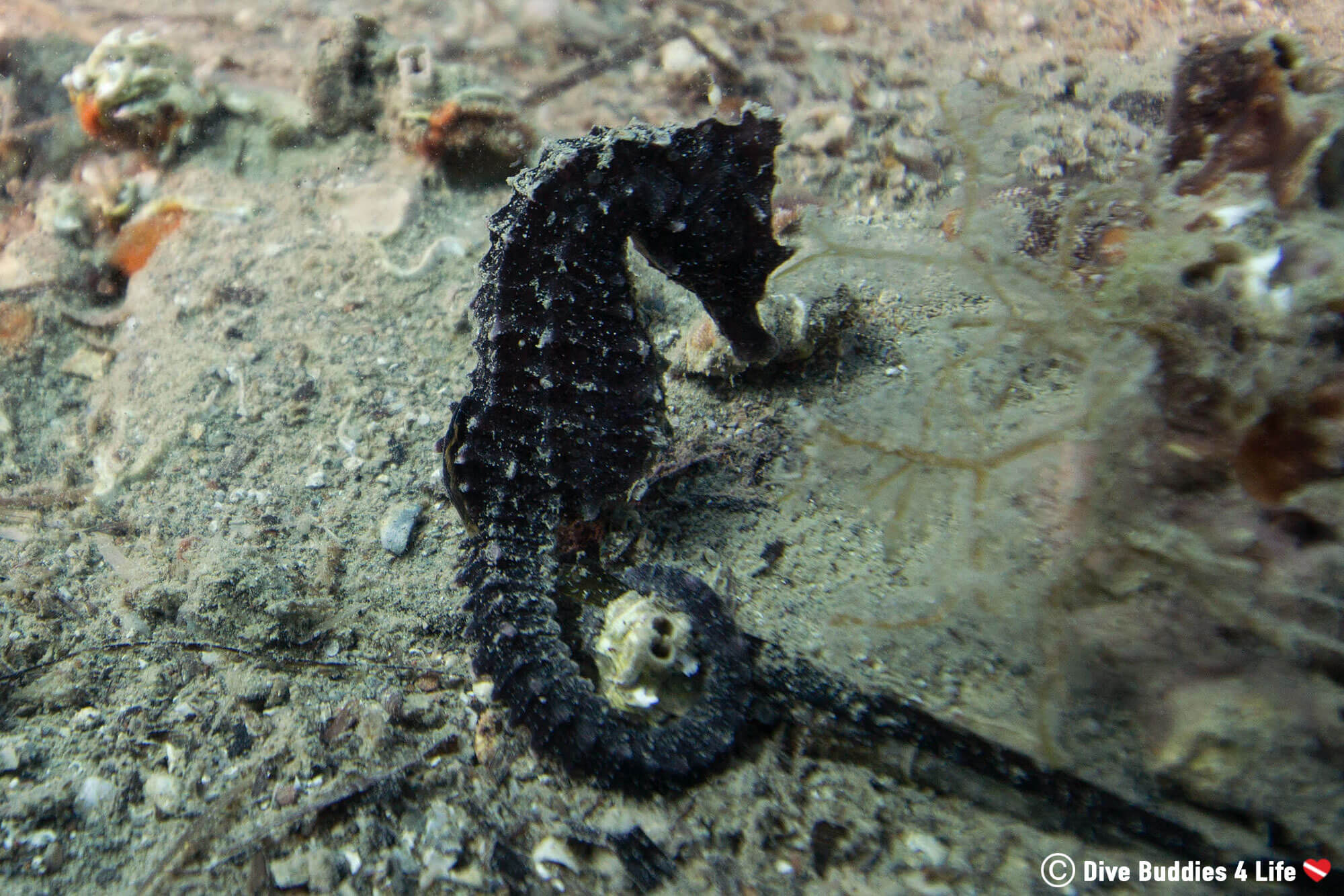 To our dismay Joey and I didn’t get the chance to do a night dive while in Piran, Slovenia. But anyone who has done a night dive, no matter where you are, can attest that the sea really comes to life after the sun sets.

If you are a fan of the dark and want to do some night diving in Piran; lobsters, squid, octopus, and conger eels frequent Slovenia’s Fiesa Reef when the sun goes down.

For a country that has only 40 kilometers of coastline, which hugs the Mediterranean sea, I was pleasantly surprised at the variety in marine life available to explore in Slovenia. If you’re a licensed scuba diver making vacation plans in Slovenia don’t forget to pencil in a few days near the coast for some diving. We found it totally worth it!

Whether you’re finning around in the shallows dancing with the curious cuttlefish or heading out in deeper waters on the hunt for some sunken treasures, it is without question that Piran is indeed a scuba diver’s playground! 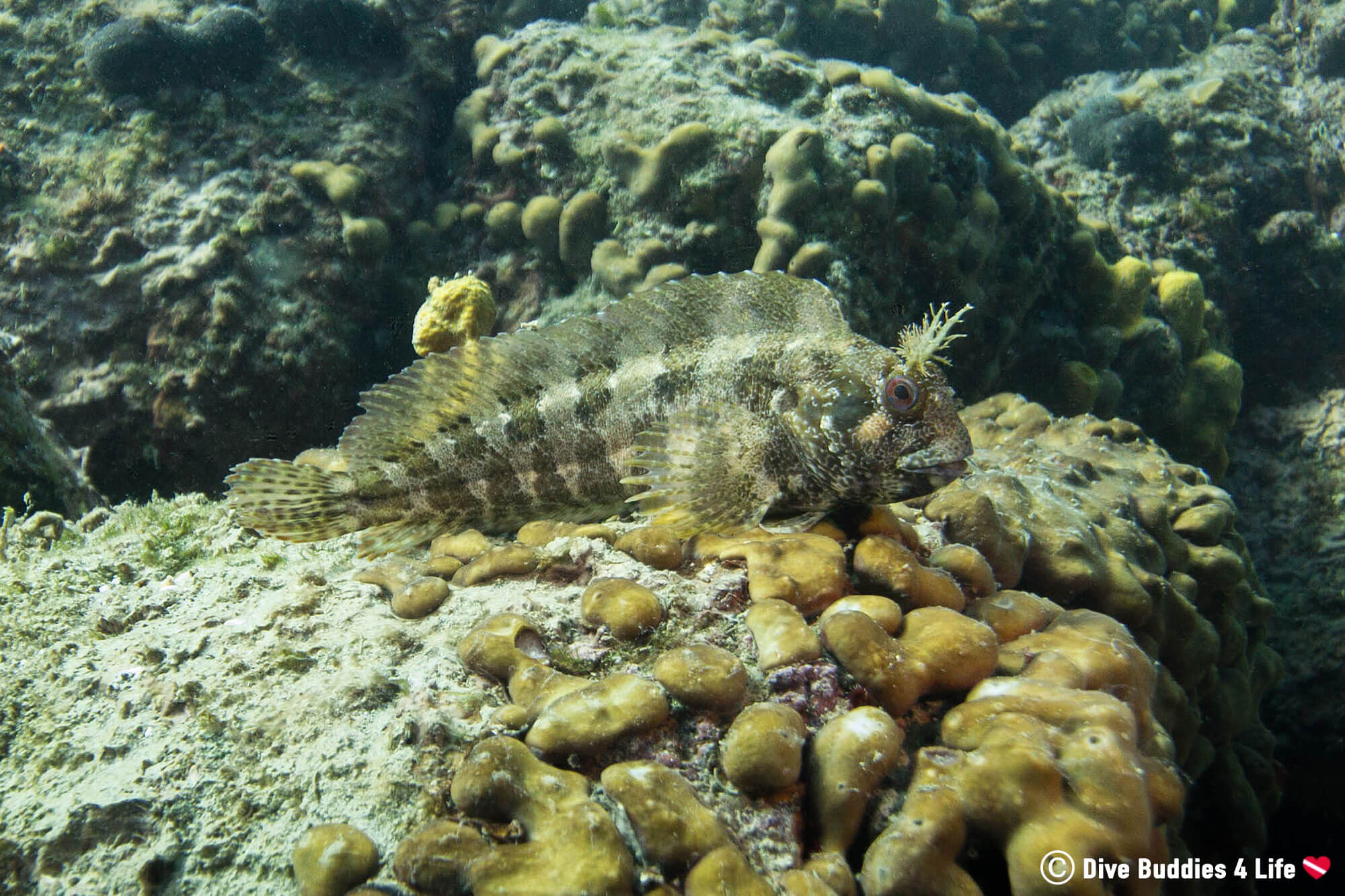 Have you ever visited the not-so-well-known country of Slovenia? What did you think of it? 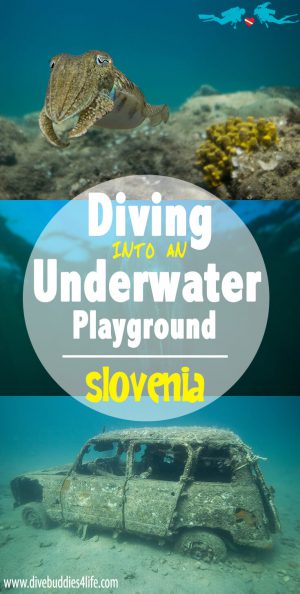 The pixel-perfect lines running tip to tail on thi

A dive light is an essential piece of your scuba d

⁣Blasting into the weekend as fast as our scoote

⠀ Here we have yet another intriguing display of

Dreaming of the gorgonian coral gardens of Cozumel

Gazing out into 2021 and wondering what things wil

Sending a little teal and some zesty orange colour