It was I who kept track of the days – how many since our last dive? How many until we are back on the Adriatic sea? How many until I get to use my underwater camera again?

We had only been away from the coast for two weeks, and already I was going into some severe saltwater withdrawal. It didn’t take a junkie to tell me I am scuba-addicted.

By the time we traveled from Bosnia-Herzegovina back into the country of Croatia I was desperate to get back in the water. I couldn’t wait to strap on my tank slip beneath the Mediterranean surface.

Staying on the Dalmatian Coast

During our stay in Croatia, we took up lodging in a small town outside of Zadar. The town was called Ražanac, and it was a quiet coastal place with one main street and three beaches. Ražanac was about an hour from our dive center of choice; the Zlatna Luka Scuba Diving Center in Bibinje.

Bibinje is part of the Dalmatian coastline, a historical region of Croatia known for its incredible landscapes and insanely blue waters. Named by the Illyrian tribe which took up residence in this area in classical antiquity, Dalmatae, as they called it way back in the day, stretches from Croatia’s northern island of Rab all the way to the Bay of Kotor in the south.

Joey and I left our Airbnb before seven in the morning, amped for an action-packed day of scuba diving. It may have been early, but we had no problems making our way to the Zlatna Luka Scuba Diving Center. We had hunted it out and made all the dive arrangements the day before.

The Zlatna Luka dive shop was cleverly crafted out of an old shipping container and had dive site information plastered all over the wall. When I couldn’t find what I was looking for on the posters, I asked the company’s knowledgeable staff members manning the front desk. They were so ready to answer all of my scuba related questions.

Once we had checked in with the dive center, we dropped our gear on the boat at the end of the pier and prepped for departure. Before we left the harbour the boat captain had everyone hook their BCD’s, tanks and regulators up, ensuring that we were ready to take to the water.

The Divemaster that Dives to the Beat of His Own Drum

It took us about 30 minutes to travel by water to the first of two dive sites we would be exploring. As per the PADI and DAN recommended rules of recreational scuba diving, our first dive would be our deepest dive.

After gearing up, I hit the water with a splash and flipped onto my back like a sea otter waiting for the rest of our group to enter. Like most countries along the Balkan coast, diving in a wetsuit is generally speaking the way to go. The water can be dreadfully cold outside July and August, and even then it gets chilly when you breach the thermocline. As I floated in the water, I watched intrigued as our divemaster joined me sporting nothing but a mask, tank, regulator and metal plate with a belt-like strap for a BCD. With everyone entirely suited up in cold water gear, I couldn’t believe my eyes. Not only the fact that our divemaster would be dealing with the cold but also that this man had his buoyancy perfected to such an art that he didn’t use a weight belt or BCD.

It was mind-boggling to see the strange scuba antics that divers in other corners of the world have adopted. This divemaster diving to the beat of his own drum was certainly at the top of my list.

A Deep Dive in the Adriatic Sea

The Adriatic sea has plenty of great dive locations, and this one was by far a Croatian favorite. My heart soared as I took my first breath underwater. Combers, sea bream and crabs, all graced us with their presence mere moments into the dive. Out of the corner of my eye, I also spotted the familiar skittish swimming pattern of the schools of damselfish that I had come to know on our Balkan coast diving journey.

Not long into the dive we arrived at the cusp of a rocky edge and began descending into the deep. Today Joey and I were supposed to be doing our deepest dive yet. I could feel the water pressure increase with every breath, as we passed sponge covered rock after sponge covered rock. As we hit the dreaded thermocline, the water temperature took an icy turn. Joey and I were both diving without hoods, and the cold water leaking down my neck into my wetsuit gave me goosebumps.

The dive group turned on their underwater lights at the 24 meter (80 feet) mark as the visibility started to waver. In spite of the depth and the loss of natural light, beautifully colored orange and purple gorgonians began showing themselves.

Interesting Fact: Gorgonians are also known as sea whisps or sea fans and are closely related to corals. They are filter feeders which use tiny polyps to catch things like plankton and organic matter brought to them by the current.

We maxed out our depth at 42 meters (138 feet) – it was the deepest dive we had ever done to date and slightly outside of the recreational diving limits. There was stuff to see everywhere we turned our masks.

By far the coolest thing we found at depth was a bunch of mermaid purses wrapped around a gorgonian limb. Mermaid purses are basically the egg cases of certain species of sharks, skates, and chimaeras. They are made out of collagen protein strands and typically have a tough leathery look to them. The divemaster told us the eggs were probably from a Small-Spotted Catshark (Scyliorhinus canicula) one of the most abundant elasmobranchs in the Mediterranean sea.

After finding those mermaid purses, my head was on a swivel for the rest of the dive. There were sharks in the area, and all I could hope for was to catch a glimpse of one.

I was beyond pleased when we rose above the thermocline on our way to the surface. I had gotten pretty chilled during our time at depth. I could tell Joey was getting cold too by the way he kept his arms and hands close to his body and stopped fiddling with his GoPro. I couldn’t even imagine how cold our wetsuit-less divemaster was fairing out.

In the shallows we investigated; seagrass beds hoping to find some elusive seahorses decorated sea walls and even under some big rocks looking for shrimp and crabs. The divemaster also went as far as gently moving what I thought was a bulging piece of sponge. I almost spit my regulator out in amaze and amusement when a crab popped up from under the sponge and began scurrying away with its home on his back. Joey and I had just seen our first Sponge crab (Dromia personata).

A Second Dive is Always a Good Idea

On our surface interval, we changed tanks and had a collective break before heading back for some more Dalmatian coast diving fun. This time we spent our entire dive hunting out little critters, especially delicately decorated nudibranchs.

During this dive, there was an unspoken rule that hung in the water. Every time someone found a fascinating animal they would flash me with their flashlight so I could swim over and take a picture. At first, it was nice to take a picture and have someone already calling me over to my next model, but it wasn’t long before I was swimming left and right and left again trying to keep up with all the different discoveries.

Don’t Miss: Diving in the Kornati archipelagos also known as the Stomorski islands. This National Park is made up of 109 islands and their encompassing seas which at one time were the richest in the Adriatic for sponge hunters.

Let me assure you that even if you are not a scuba diver the country of Croatia really is worth discovering. Beyond the excellent diving experiences; the amazing coastlines, beautiful national parks, and city scenery are world class. Come, drive the Dalmatian coast and stay to enjoy the postcard-worthy beaches, it’s no wonder Croatia is on everybody’s traveling bucket list.

Hey there scuba squad; call me crazy, but I love the feeling of water pressure crushing in on your body when you do a deep dive. It’s so intense to feel the massive amount of water between you and the surface. Do you like that squeezing feeling? 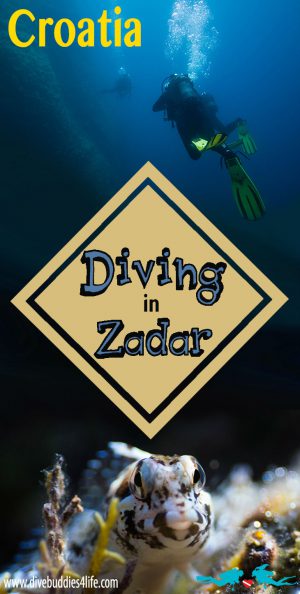