Exploring Some WWII Wrecks at the Beaches in Normandy

Shipwrecks are like sunken time capsules. They capture a moment in history frozen forever on the bottom of the sea. Each has a story to tell, and with a little exploration can reveal so much about the time and the people.

And for the D-Day shipwrecks along the landing beaches in Normandy, there are a lot of stories to be told. 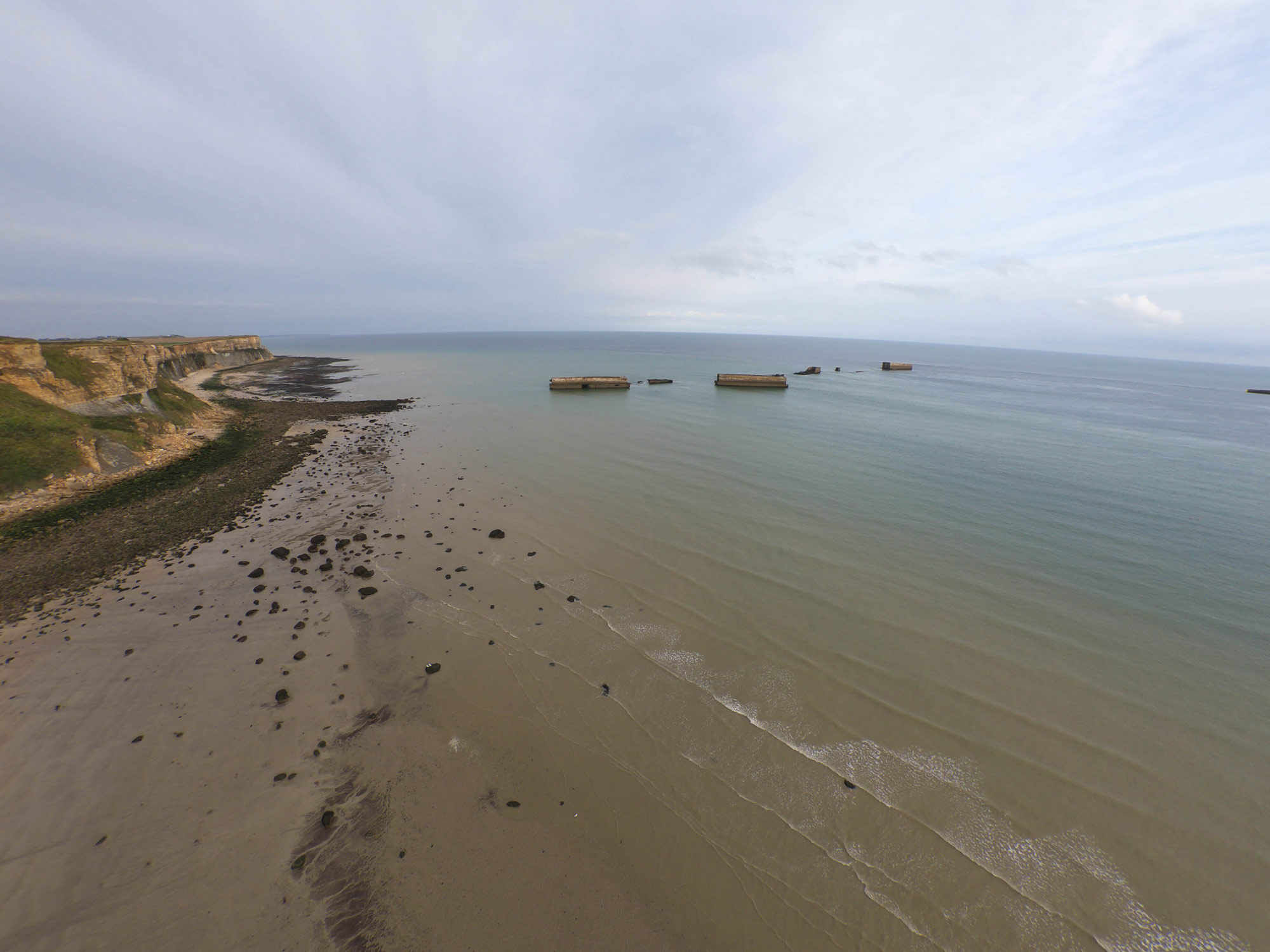 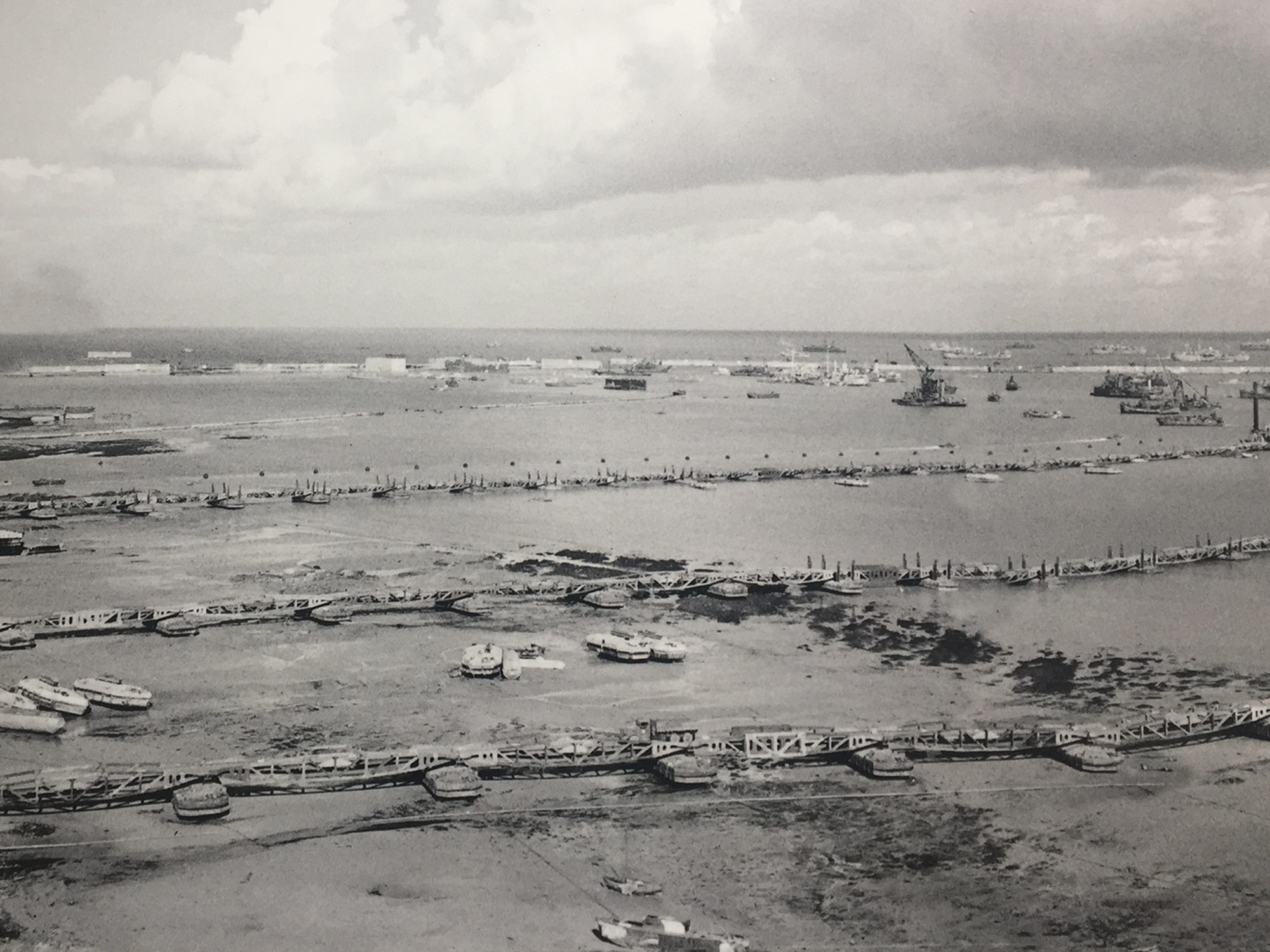 Normandy is a region of France, located in the north-western corner of the country. The area is characterized by chalk-white cliffs and sandy beaches. And while this segment of French coastline is known for a lot of things, Normandy is perhaps best known for its historic significance – as the D-Day landing beaches during the Second World War. 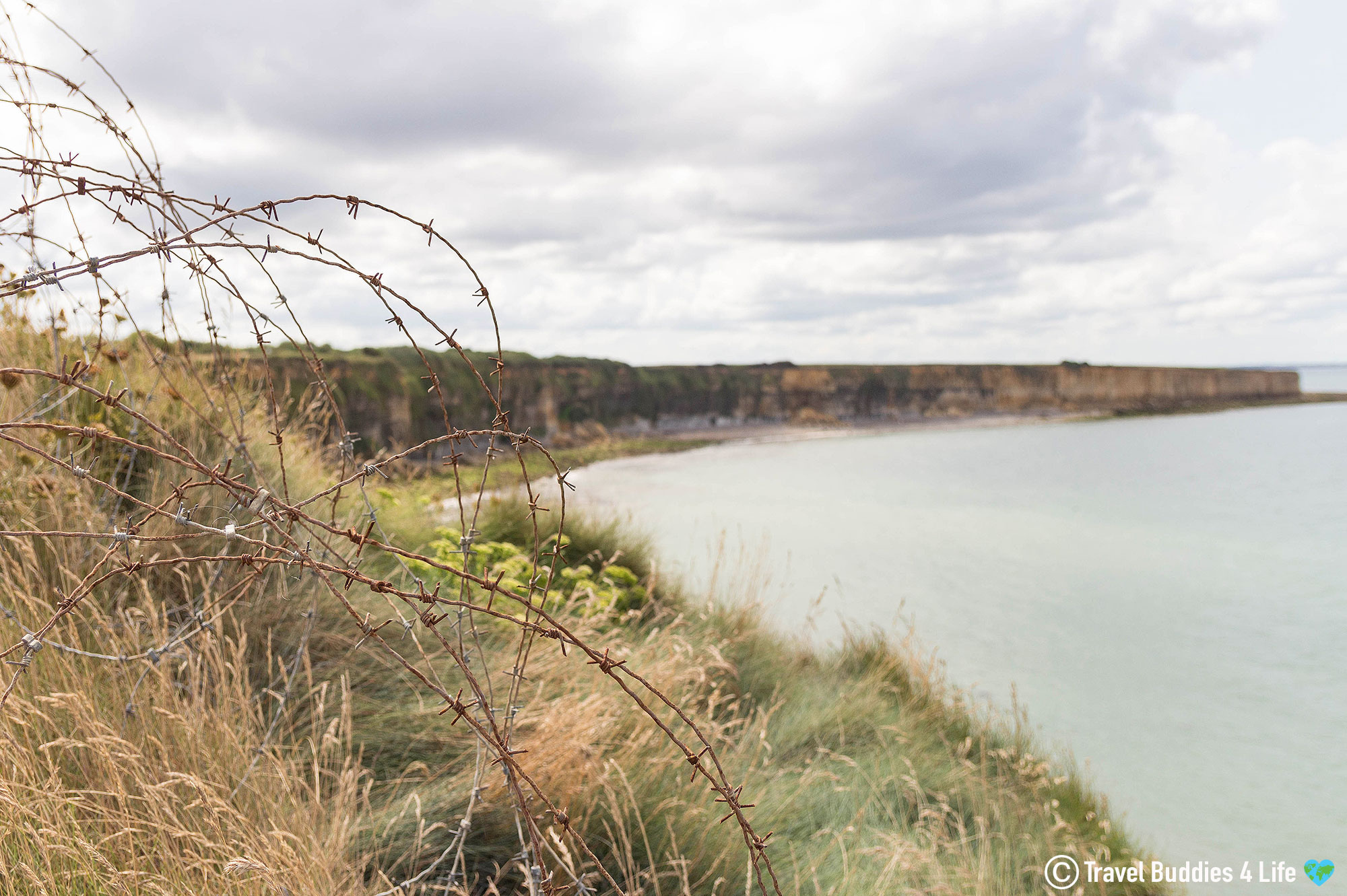 On Tuesday, June 6th, 1944 the British, American and Canadian allied forces invaded a select stretch of coastline to begin the liberation of Europe from the Nazi reign of terror. Of the 30, 600 square kilometers that make up Normandy; 96 kilometers comprise the five landing beaches codenamed: Sword, Juno, Gold, Omaha and Utah. Infantry and armoured divisions landed on the beaches in unison, paired with airborne assaults and naval bombardment. Together their goal was to push back the German army and regain a foothold in Europe.

As you can probably imagine, this massive undertaking resulted in immense losses on both sides. Where the Allied forces were concerned, some soldiers made it to shore, while other brave souls met their untimely fate in what would eventually go down as the largest seaborne invasion in history.

People flock from all over the world to visit Normandy, walk the historic beaches, visit the museums and pay homage to the fallen soldiers. After all, it was not too long ago that many gave their lives for a cause much bigger than themselves.

Rooted in history, you’d be hard-pressed to find a diving local that offers a better opportunity to get up close and personal with World War II wrecks. Just off the coastline, hundreds of sunken wrecks litter the Normandy sea bed. Tanks, ships, landing crafts, troop carriers and even the pontoons used to make the Mulberry artificial harbors. Most of the wrecks can be found less than 25 meters (82 feet) deep. 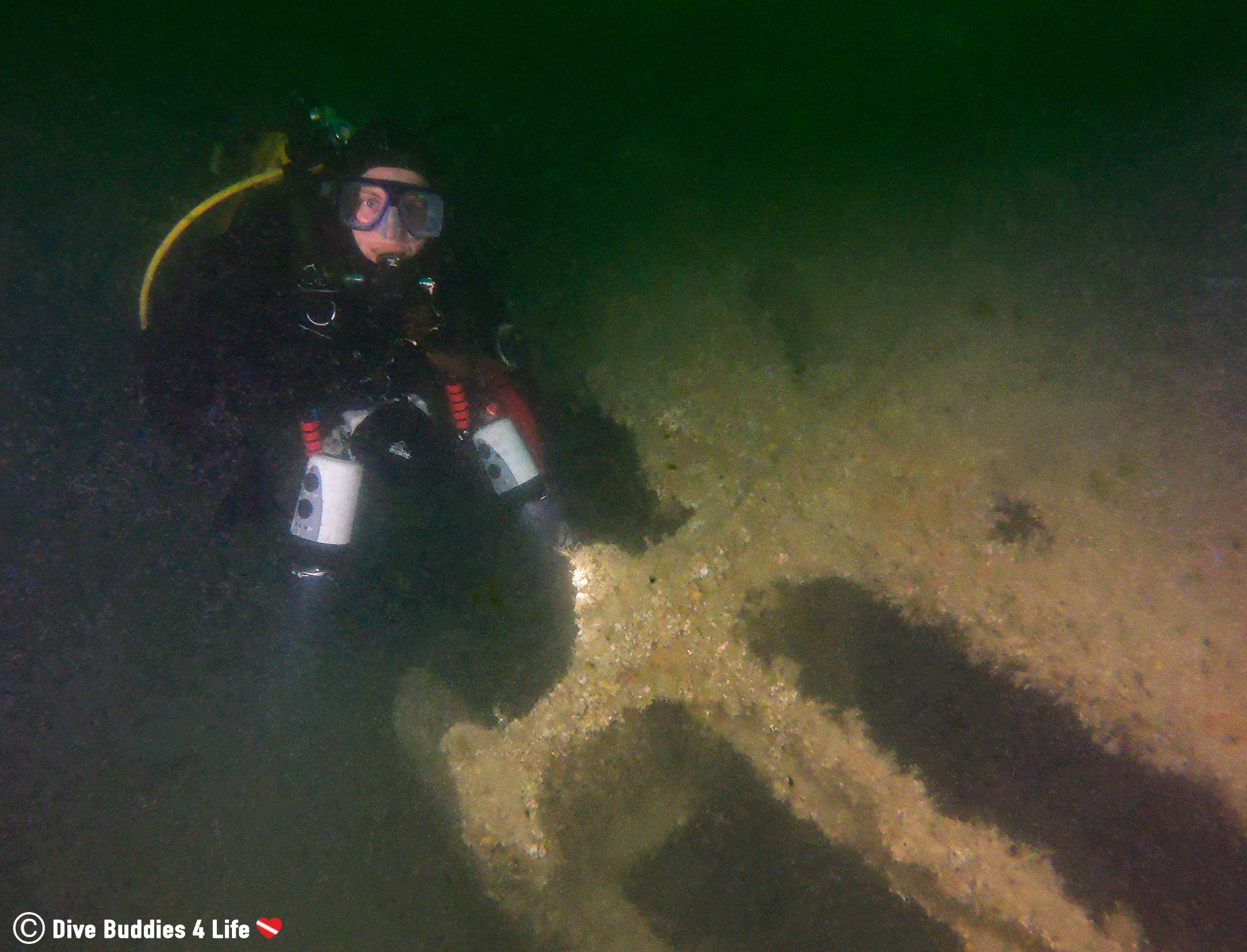 Into the Waters of the Landing Beaches

The oceanfront towns of Arromanches-Les-Bains and Asnelle are popular starting points for D-Day wreck diving, after all, these communities are located right on the Gold beach landing site. We joined a friendly dive club in Asnelle for our dives which generally heads out a couple of times per week pending weather and ocean conditions.

After loading our dive equipment into the RIB, which happened to be strapped on a trailer behind a GIGANTIC tractor for deployment, we received a quick rundown on the particularities of diving in this historic location. For obvious reasons we were diving a war site with massive loss of life and respect for our surroundings was of the utmost importance. But beyond this, we were also warned to be cautious as there could be unfound explosives on the remaining wrecks. Yup – you hear me right – KA-BOOM! 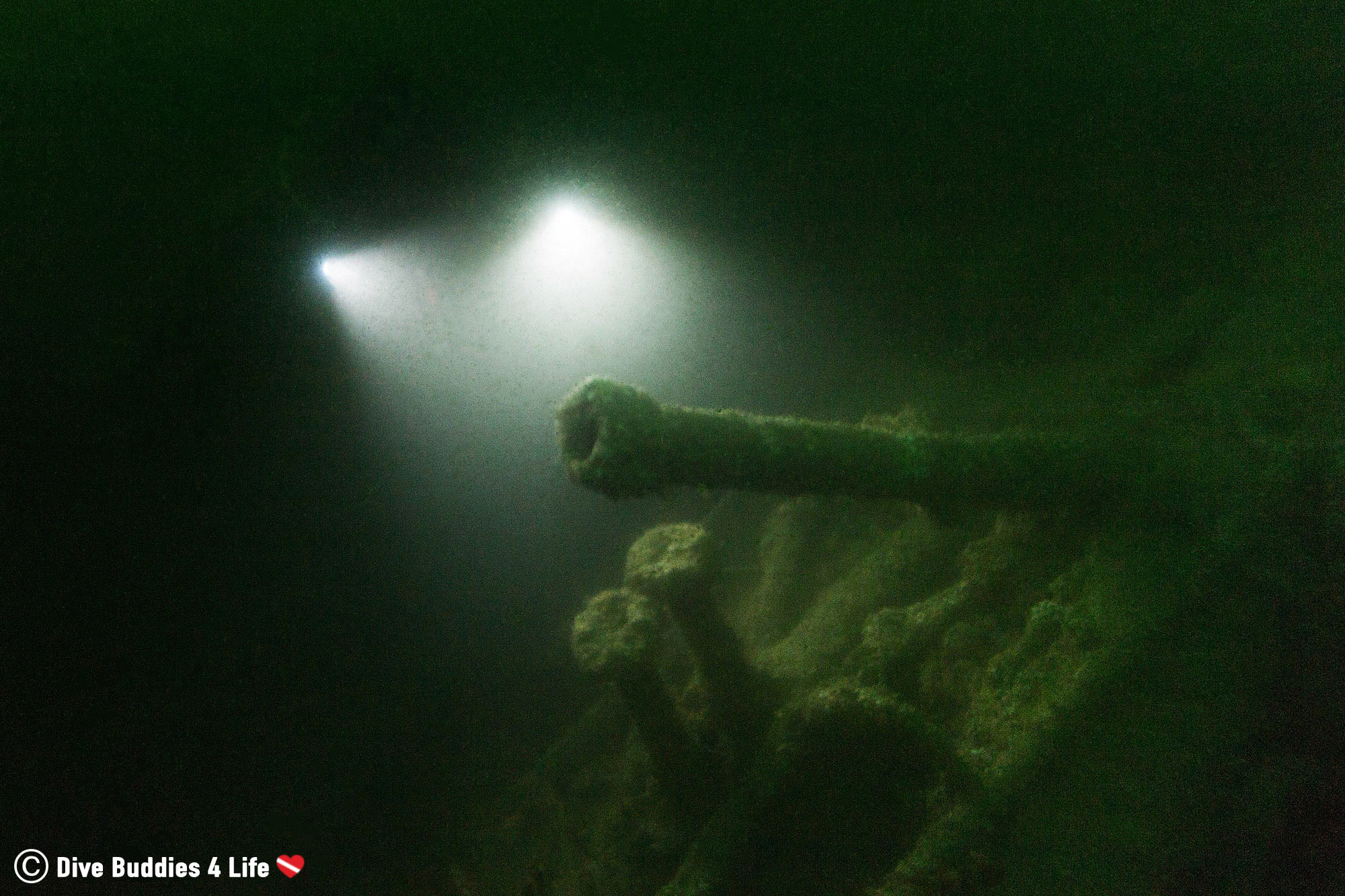 The day’s dive site was reserved for a section of the Pontoon Harbour. With a full RIB of divers, we sped out from the beach arriving at the site roughly 20 minutes later.

Backrolling off the boat, Joey and I ascended into Normandy’s dark and dismal environment. The mooring line became my only reference as I picked my way down into the murky water. Reaching the bottom I could see the scattered silhouettes of silver scaled fish weaving in and out of the objects in front of me. I was surprised at the amount of life. Moving elbow to elbow with Joey, we progressed from the mooring line along the pontoon masses on the bottom. Visibility was slim and we kept each other close and used our photo and video lights to stay in check. Looking through my mask I could briefly make out the shapes of man-made objects which after close to 80 years on the bottom had become fully encrusted in marine flora and fauna. 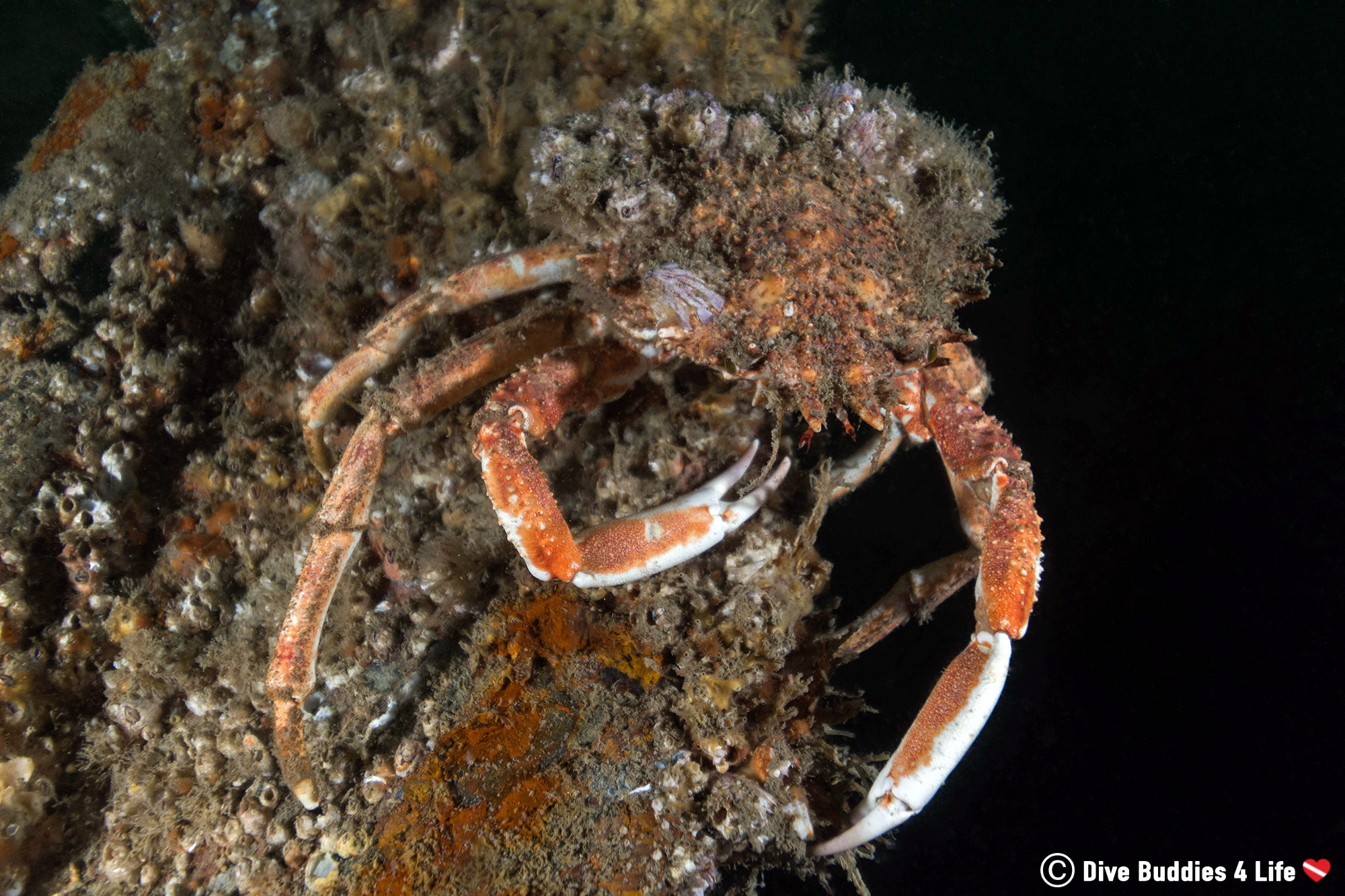 Diving deeper we searched through nooks and crannies of the debris with our lights looking for interesting animal finds. The pontoons were now home to crabs, lobster, hake, sponges and even the occasional conger eel.

Our dive at depth lasted for just shy of an hour before we began hunting out the mooring line to return topside. In spite of poor visibility, we did manage to find the line and head up to the surface. Once on the RIB, you could already see the tide beginning to pick up. The ocean was flowing and the boat began to drift. 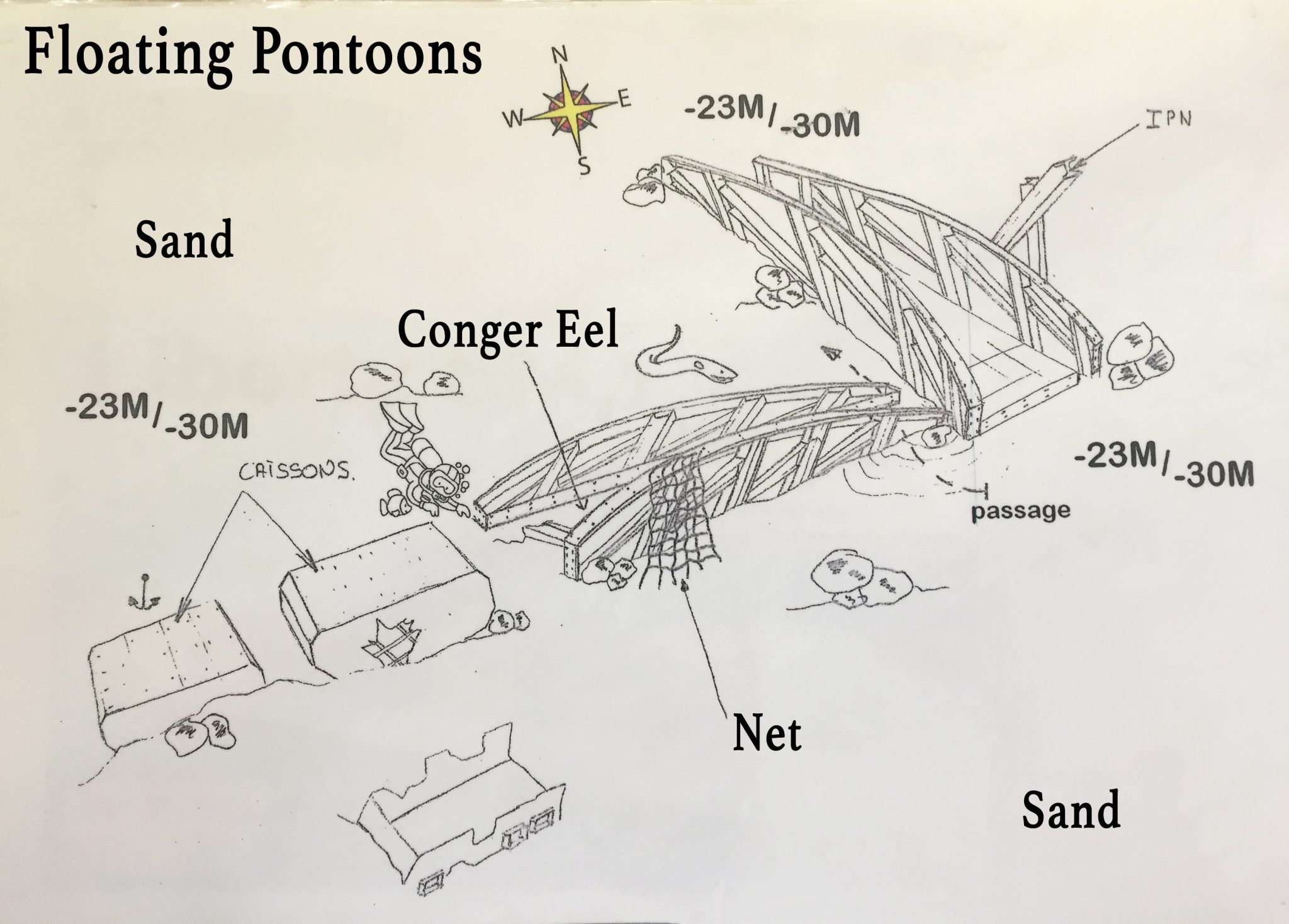 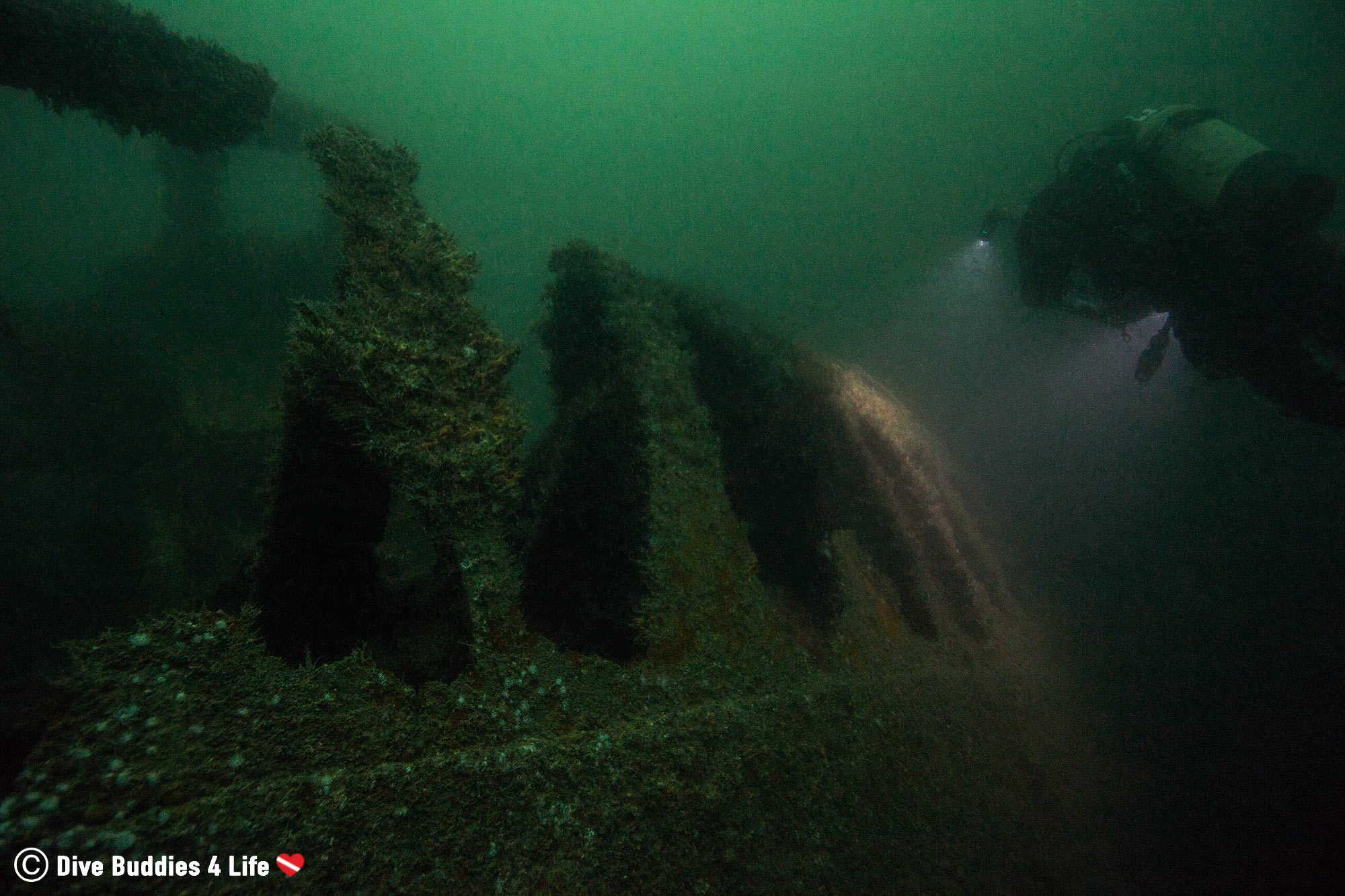 The Empire of Broadsword Shipwreck

Our second D-Day dive was about a week later, on the Empire of Broadsword, an impressive beast of a ship lying just off the coast of Omaha beach.

The SS Empire of Broadsword was a Type C1-S-AY-1 infantry landing ship built in 1943. At 121 meters (396 feet) she is one of the biggest Normandy wrecks and was sunk by mines in July 1944 while maneuvering to an anchoring area. The blasts caused catastrophic damage to the ship’s hull and keel.

We were a small group for the day’s dive. Getting to the Empire of Broadsword took us longer than our previous dive about 40 minutes. We sped along the spectacular coastline and tied off facing Omaha beach. Heading down to the wreck, I immediately noticed that although still limited, visibility was better than our previous dive. It was great to be able to see further than an arm’s length away. My first glimpse at this huge chunk of metal it was easy to discern a ship even with the Broadsword’s middle structure practically reduced to rubble. The vessel was split into three distinct parts – the stern, midships and bow – spread out over 120 meters (394 feet).

Making my way around the ship Joey and I thoroughly enjoyed the many weapons and guns poking out from the most unlikely of places. There were even some critters who had made their home in the barrel of these weapons. 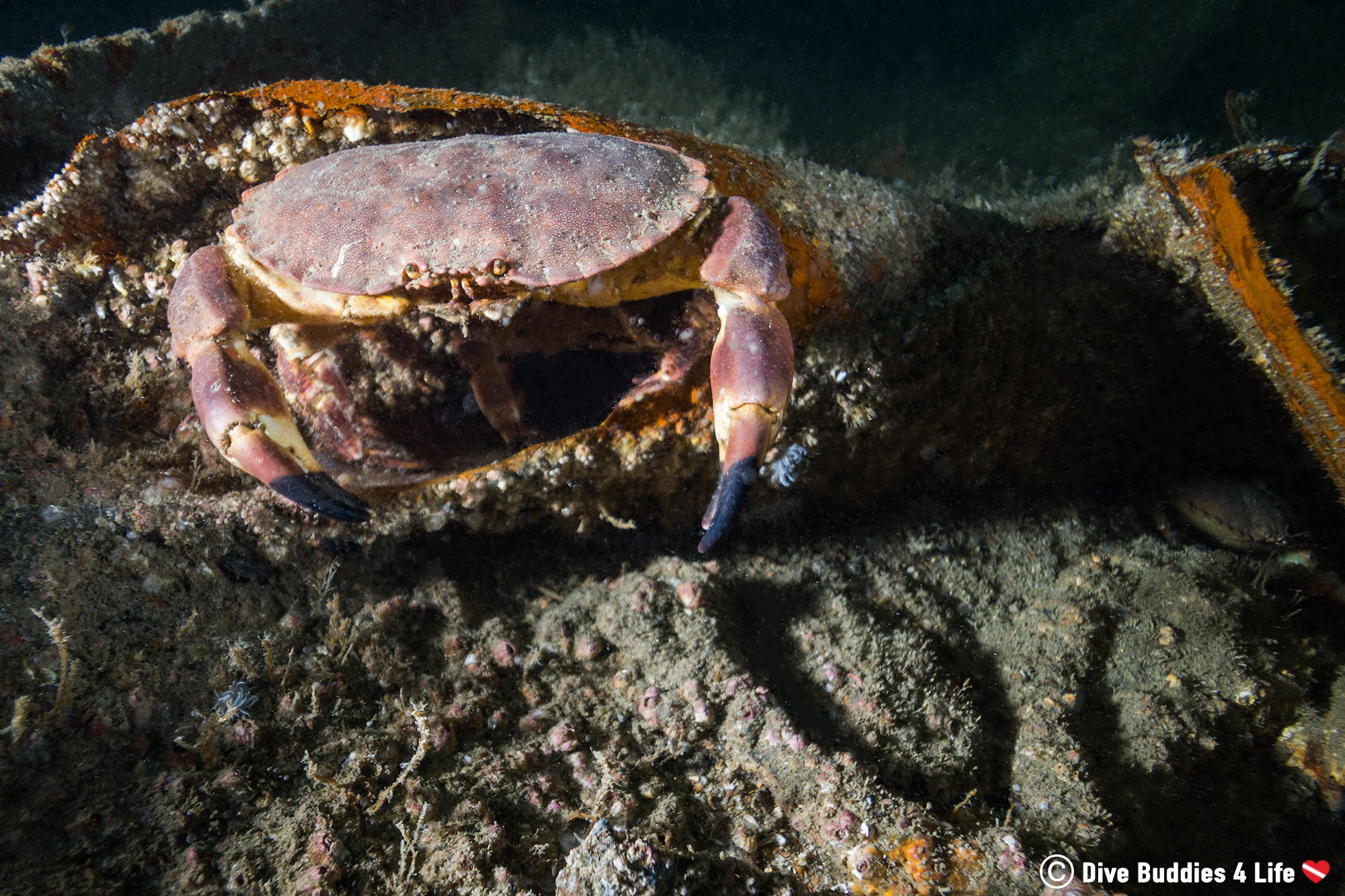 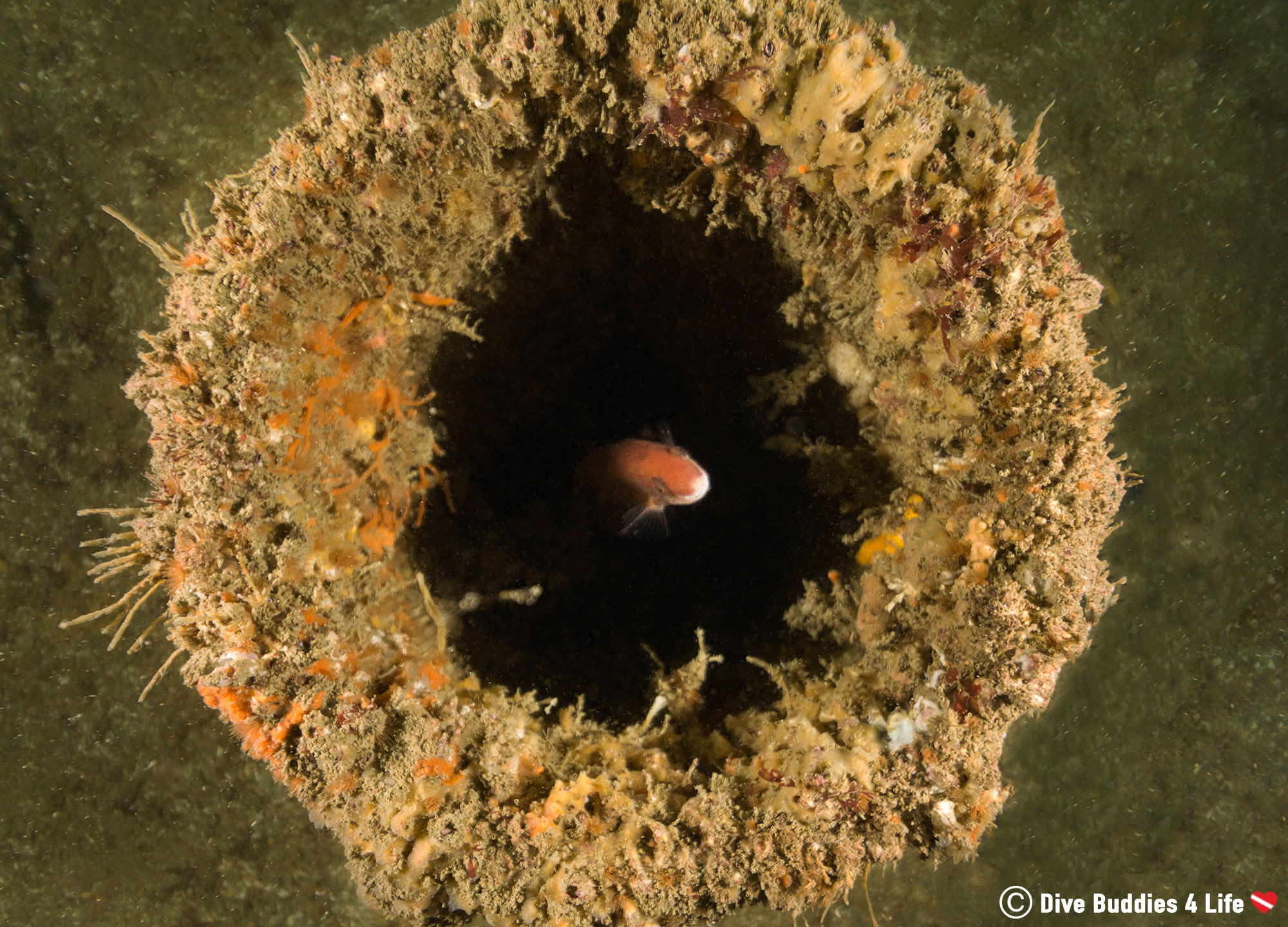 I took my time examining this silent witness from the second world war now resting on the bottom. Looking at this massive ship, it was hard to comprehend the ferocity of the explosion needed to cause such damage. In the eerie stillness of the ocean, it saddened me to think of all the turmoil brought upon this picturesque region.

Wrapping up our dive, Joey and I took one last look at the ship realizing how much of a privilege and honour it was to be diving in such a historically significant place. Climbing back into the RIB, we began strapping down our equipment with the mindset that the day’s adrenaline-rush was well behind us, but Normandy had other plans.

Unfortunately, due to current and limited visibility, one of the last divers to ascend became tangled in their delayed surface marker and was dragged to the surface from depth. As per the club and France’s strict dive emergency protocols, the diver was hauled into the RIB, placed on oxygen and a MedEvac chopper was radioed to take the diver to a hyperbaric facility in Paris.

Hanging on to the RIB for dear life, we ripped back to the beach at breakneck speed. It was a long nerve-wracking trip, but it helped that the diver in peril was conscious, alert and in good spirits. Landing on the beach we were greeted by paramedics, police and eventually a helicopter. Thankfully once medical personnel assessed the situation and police did their interviews, it was decided that the diver could be transported by ambulance to a local medical facility for closer observation and did not need to be evacuated via chopper. It was a relief to know that another life would not be claimed by this ill-fated place. 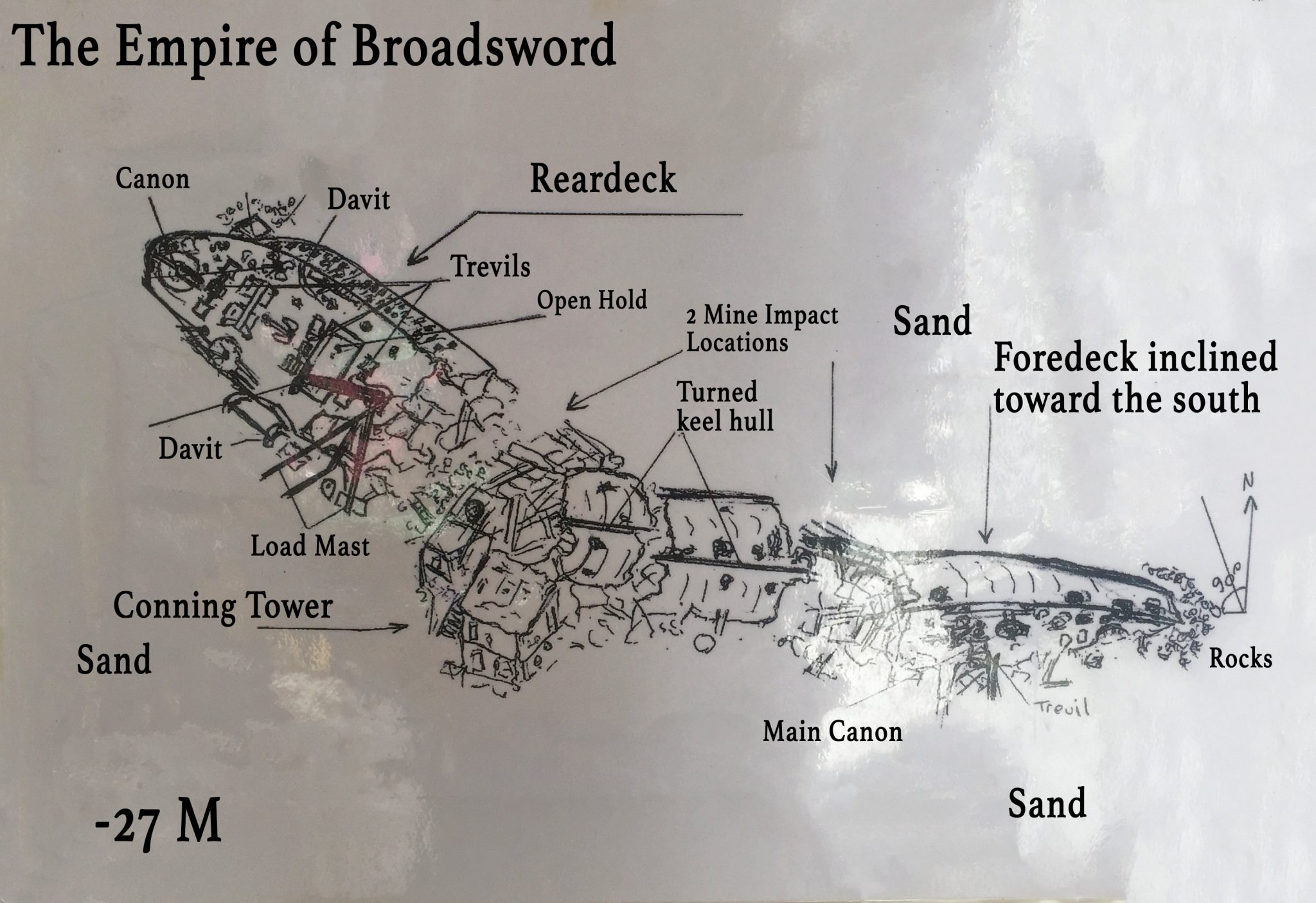 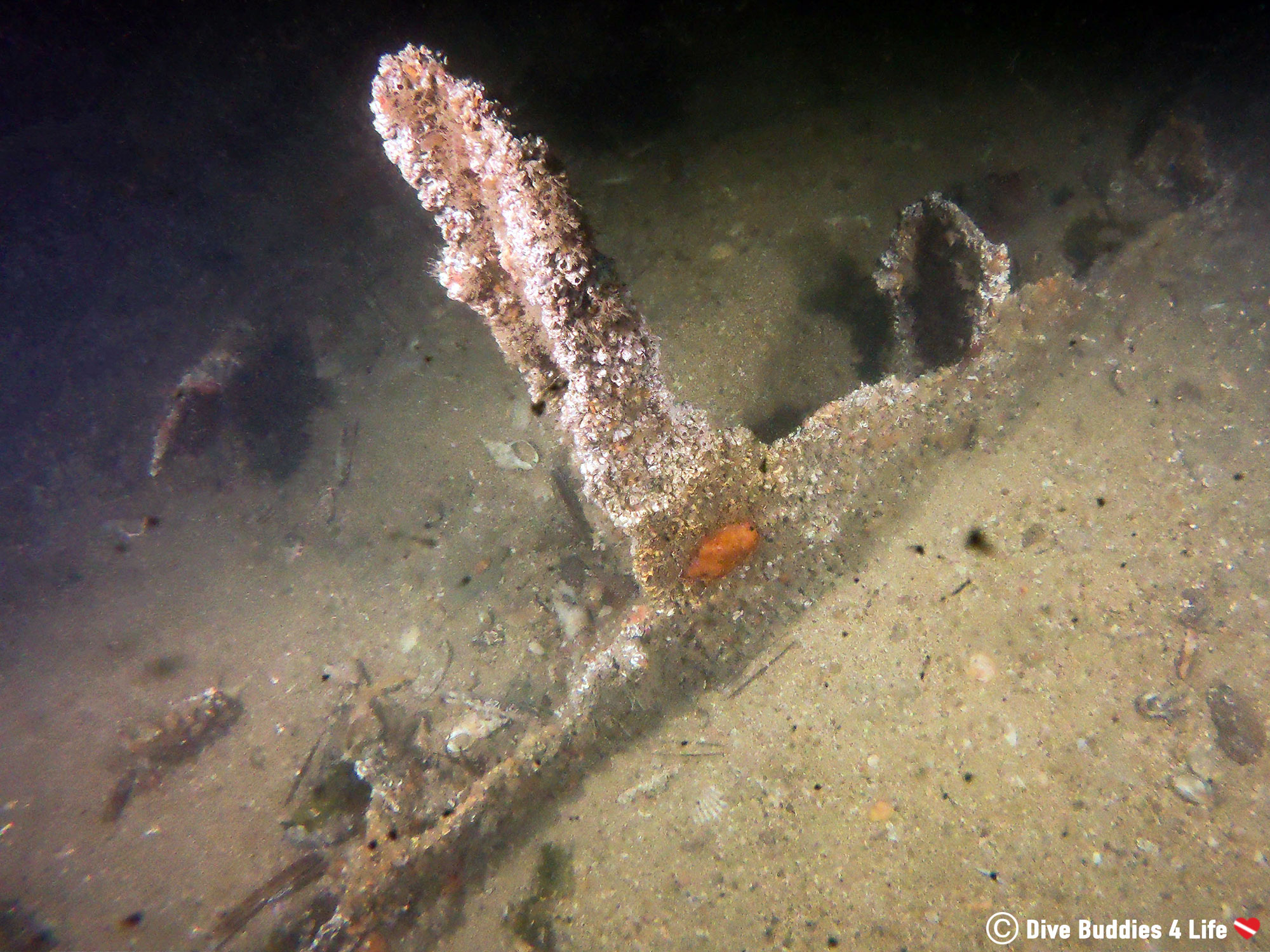 Over the course of time, history has made its mark in many places. The landing beaches of Normandy are a few of those places where the story that has shaped our past truly comes to life.

There are no words that can be used to describe seeing and exploring a place that was once riddled with so much violence and loss. From the oceanfront monuments, constructed in remembrance of all the lives lost, to sandy beaches that were once stained with blood, Normandy is both interesting and special, in a very sad and somber way.

Further to our land visit, heading underwater and scuba diving several D-Day shipwrecks was a pretty unique dive experience. Untouched and unmoved since World War II, these sunken time capsules and war graves, enabled us not only to take a trip back in time but also to reflect on the sacrifice many soldiers selflessly made. 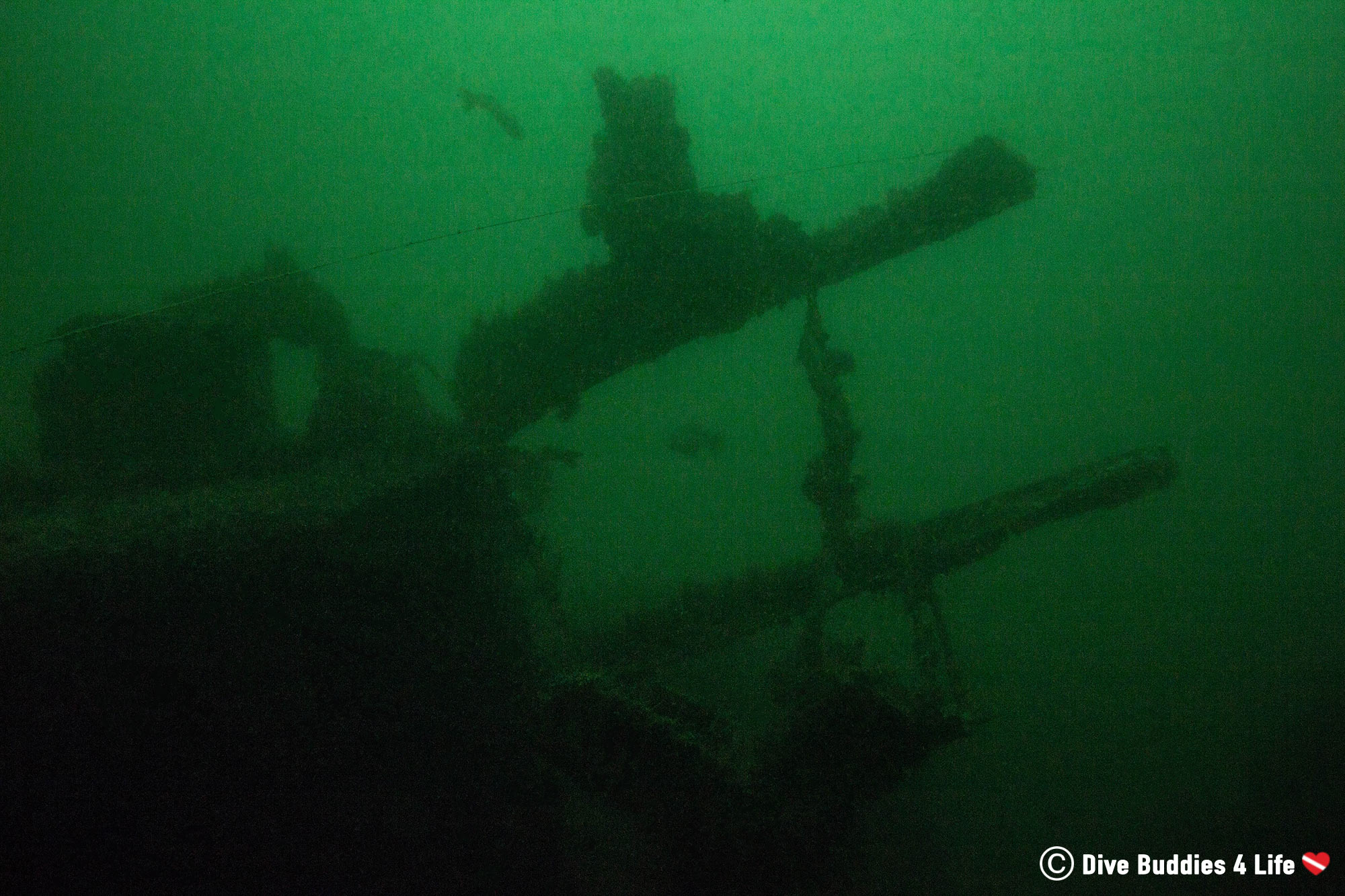 Through the eyes of a scuba diver and underwater photographer, Normandy is not a place with a picture-perfect diving reputation. With open sandy beaches and exposure to the Atlantic, the visibility can be very limited and dive conditions less than ideal, especially after a full moon. As my pictures can attest, at times I felt like I was diving in little more than pea soup. Needless to say Joey and I never strayed far from each other’s side. The current along Normandy is also a limiting factor, making it so that dive clubs typically undertake only one dive per day.

But visibility and current aside, for the brave, the curious and the patriotic, heading under the water is a reverence beyond anyone’s wildest dreams. Even two years later I can still feel my heartstrings being pulled from our subtidal adventures. Being there, underwater, you cannot help but feel a sense of pride and gratitude to the many that have given their lives for our safety and freedom. To visit the underwater resting place of such a monumental world event is moving, stirring and forever life-changing.

I’m sure you’ve heard of D-Day before but did you ever imagine that you could dive some of the wrecks? If you had the chance to visit Normandy would you dare venture into the turbid waters for a glimpse of history at it finest? 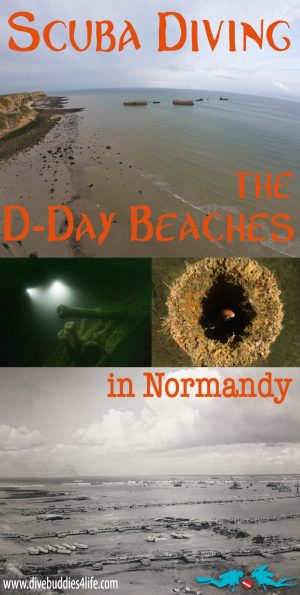