From the Ocean with Love

Tis’ the season of hearts, cupids, romance, and chocolate. And with Valentine’s day just around the corner love is in the air – even underwater.

If marine animals could talk here’s what they would say to you this Valentine’s Day:

Whale you be mine?

Whales are polygamous mammals, meaning that they will have more than one mate over their lives and even during a breeding season. Different species of whales will engage in different types of courtship rituals from battles displaying dominance to gentle threesomes where one whale supports the female for the other.

Of all the different behaviors whales have adapted for reproductive purposes, by far the most beautiful display of courtship is the whale’s song. Some bull whales use a deep throaty song which is a combination of clicks, whistles, groans and other noises to attract females. This song travels over long distances underwater enabling the female to locate a male who is ready to breed. 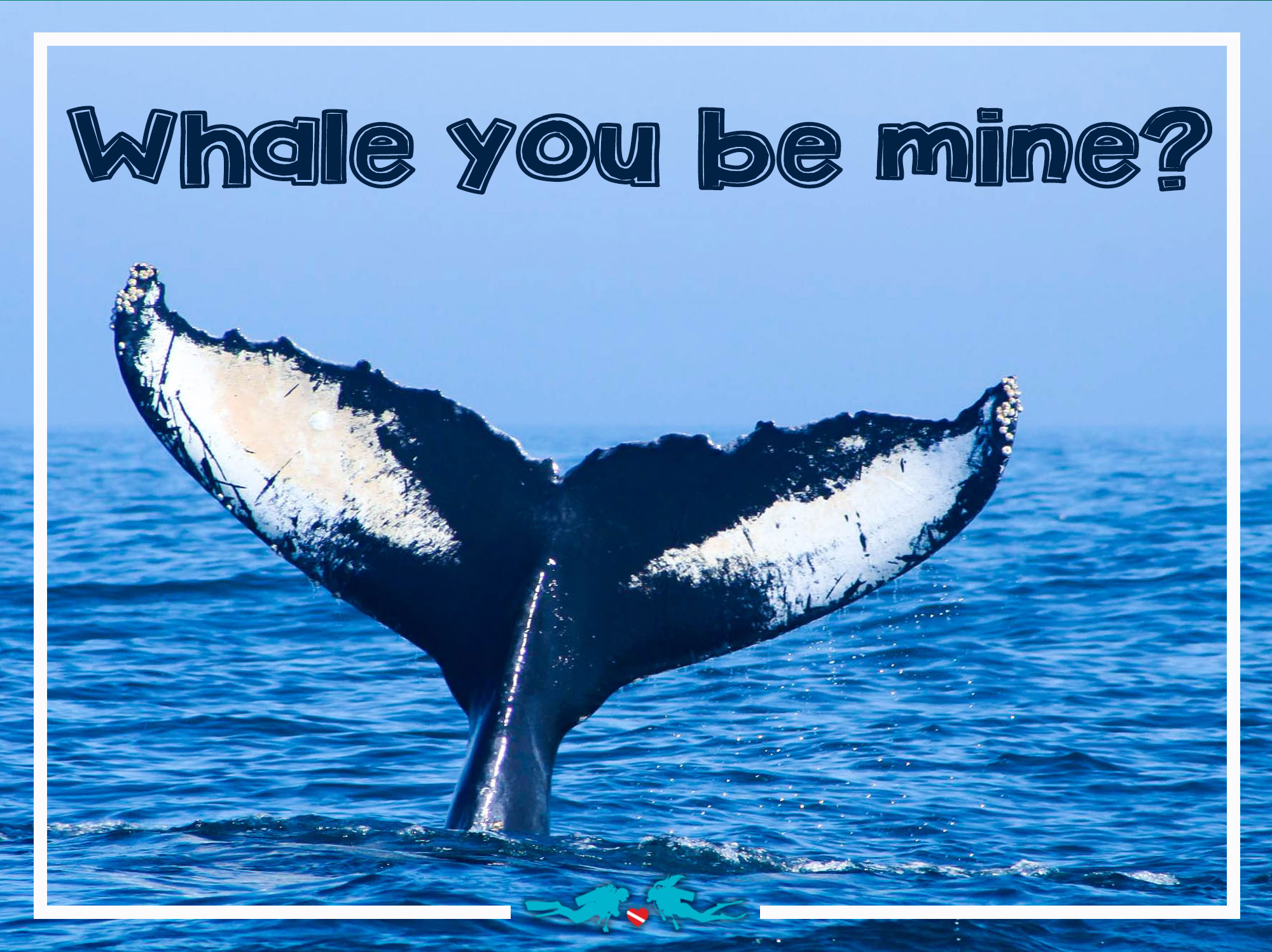 Some species of shrimp find refuge in deep sea glass sponges (Eupectella aspergillum). Due to the limited amount of space in these sponges – only two adult shrimp can generally fit inside and build a home, a male and female.

The shrimp pair will spend their days cleaning and eating whatever bits of food filter through the silica sponge mesh. When they breed, the small offspring will squeeze through the glass sponge holes to escape and eventually find a new home, inside another glass sponge with their monogamous mate. 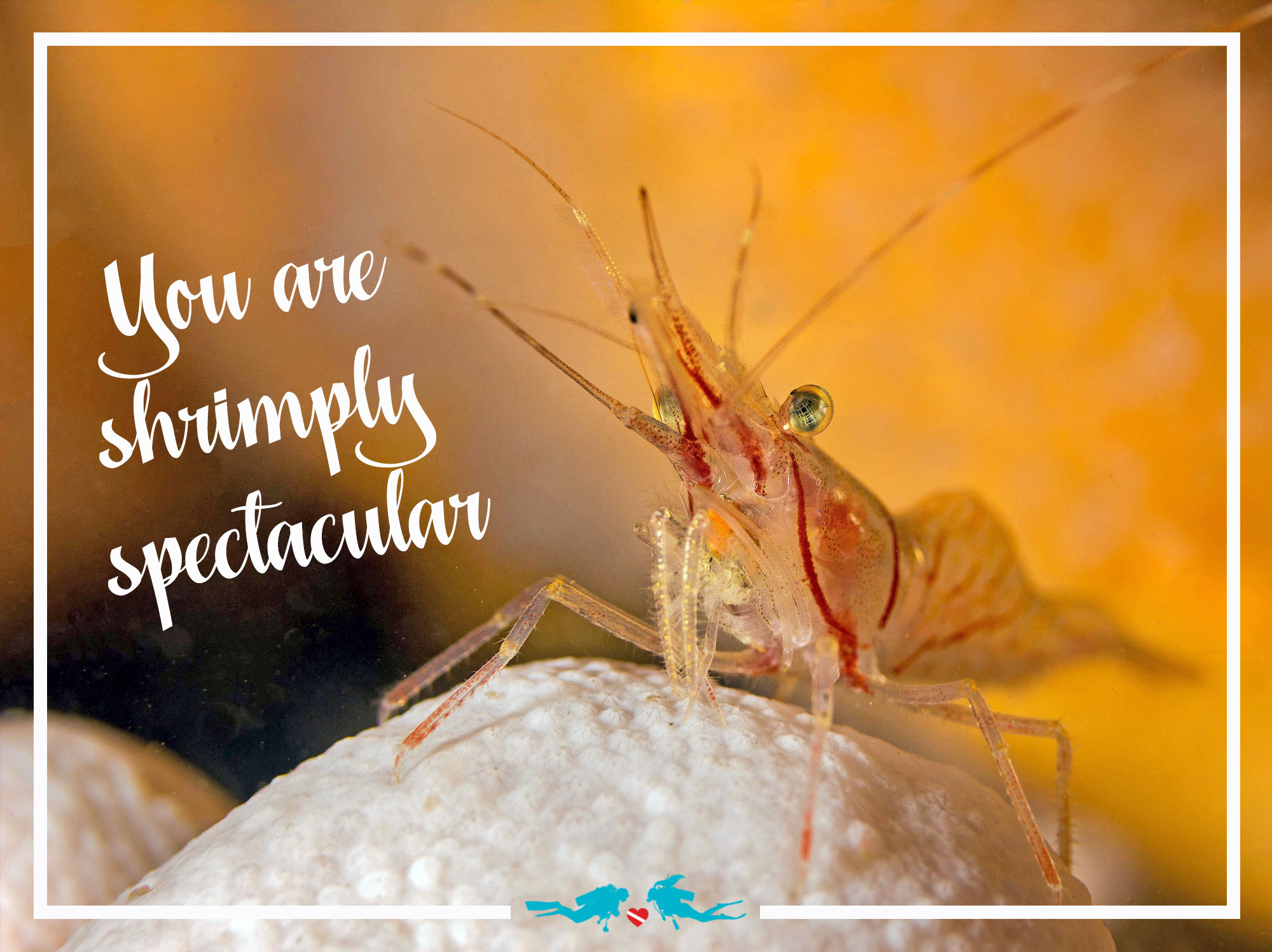 While most species of jellyfish reproduce at random by releasing sperm and eggs into the water, there are a few species of box jellyfish that reproduce through their mouths and fertilize eggs inside their body cavities.

Copula sivickisi is one of these box jellies which displays this bizarre reproductive ability. Researchers hypothesize that the male and female jellyfish are attracted to each other via chemical signals. When Copula sivickisi mate, the male transfers a sperm package also containing some of his stinging cells – only different from his normal ones, lacking the toxic poison. The female will then incubate the eggs for a few days before dropping them off on a reef. 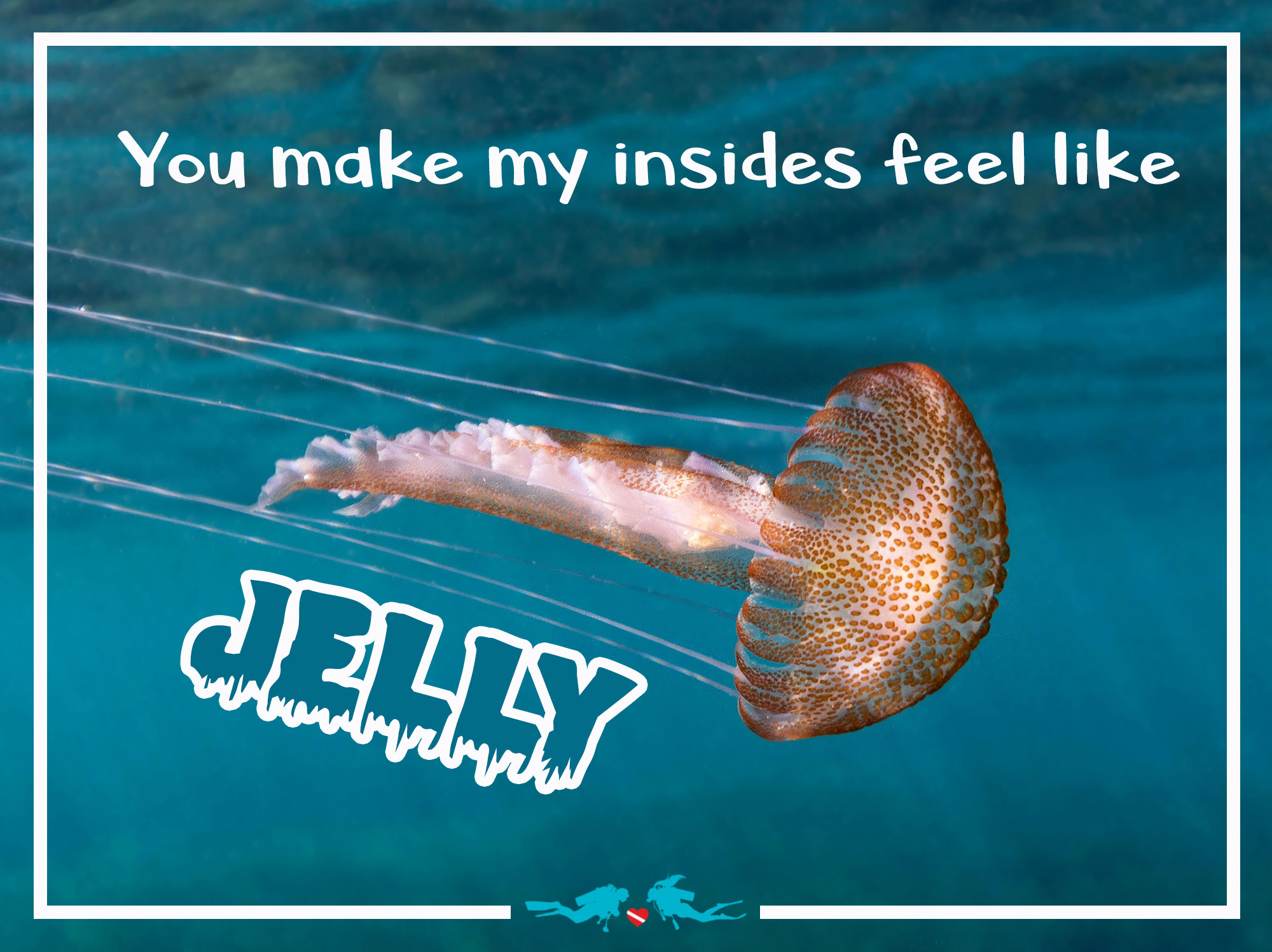 Sealed with a kiss

Most of the time playful seal populations live in harmony. But as the mating season draws near the males become aggressive and very territorial.

Call it hormones or call it natural selection at work, male seals will fight, bite and hit for the right to claim a seaside territory of females as their own. The reward?? Well, in some instances the expanse of land had as much as 50 female seals on it, all of whom the victorious male will copulate. 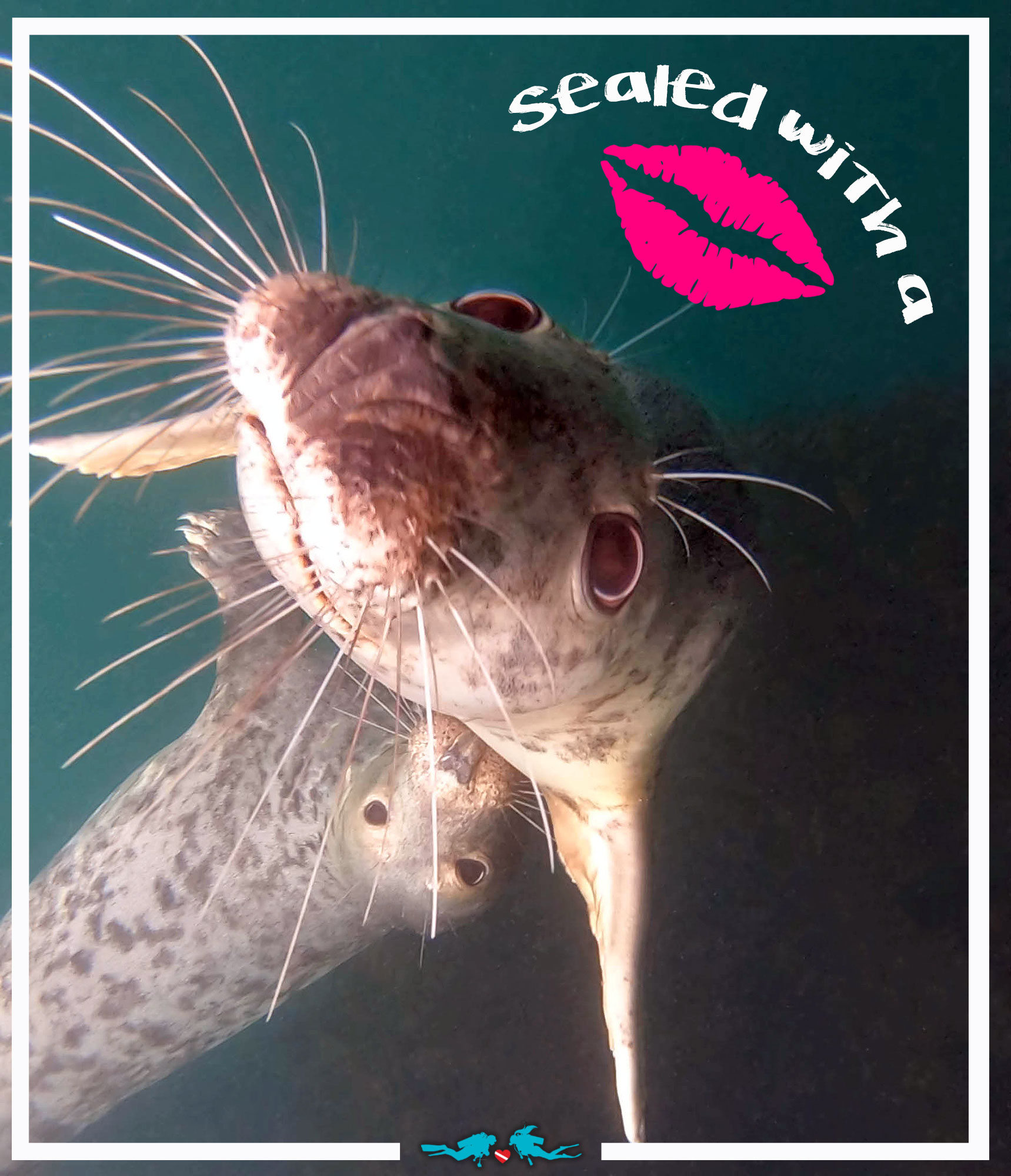 I’m a sucker for you

The spiny lumpsucker stays true to its name, in that it has a modified pelvic fin that is a literal suction cup on the bottom side of its body. However when it comes to lumpsucker romance, it’s not about the suction cup, it’s all about the best nest.

During mating season, males will compete for females attention by creating a nest. The female lumpsucker will pick her favorite nest, lay up to 350,000 eggs and swim off into the sunset leaving the fathers to fertilize and care for brood. Over the course of 4-8 weeks, the male will protect the nest from predators and fan water over the eggs to keep them oxygenated. Once the babies hatch dad’s work is done, and the new hatchlings are left to fend for themselves. 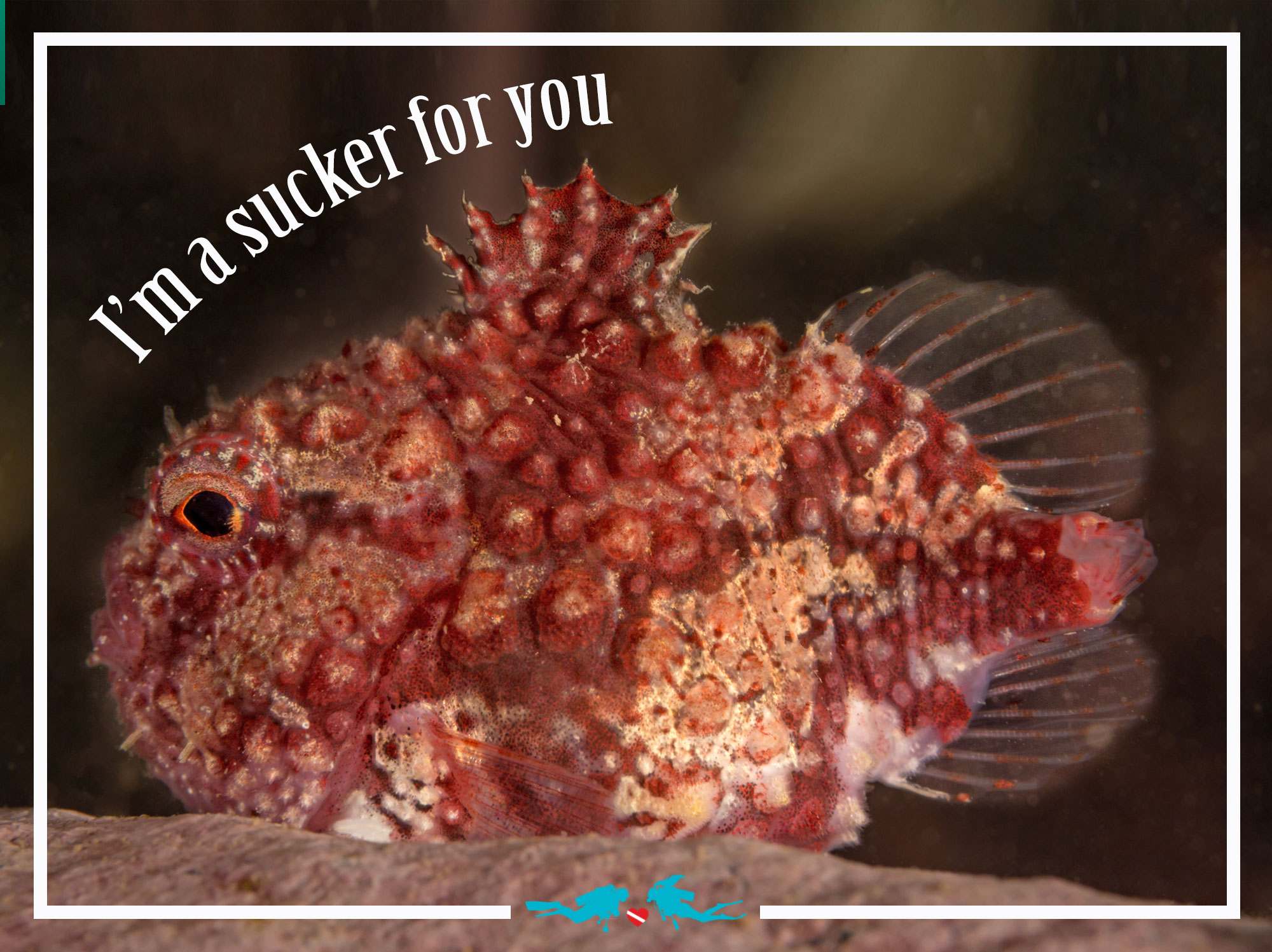 You octopi my heart

Even though octopus are profoundly antisocial and cannibalistic creatures, love still finds a way with these spineless animals.

Male octopus have a specialized arm called a hectocotylus which they insert into the females mantle (essentially her head) to reach her small oviducal gland and reproduce. The problem for the males, however, is that the females are often larger and hungrier, and known to strangle, kill and eat anything that gets too close – even their own kind.

But in spite of the threat on their lives, persistent male octopus have evolved a host of sneaky tactics to get within an arm’s length of the female and mate. Some of these tricks include handing over the spermatophore loaded arm through self-amputation, mating with a female while she is feeding and even entering the females den disguised as a girl. 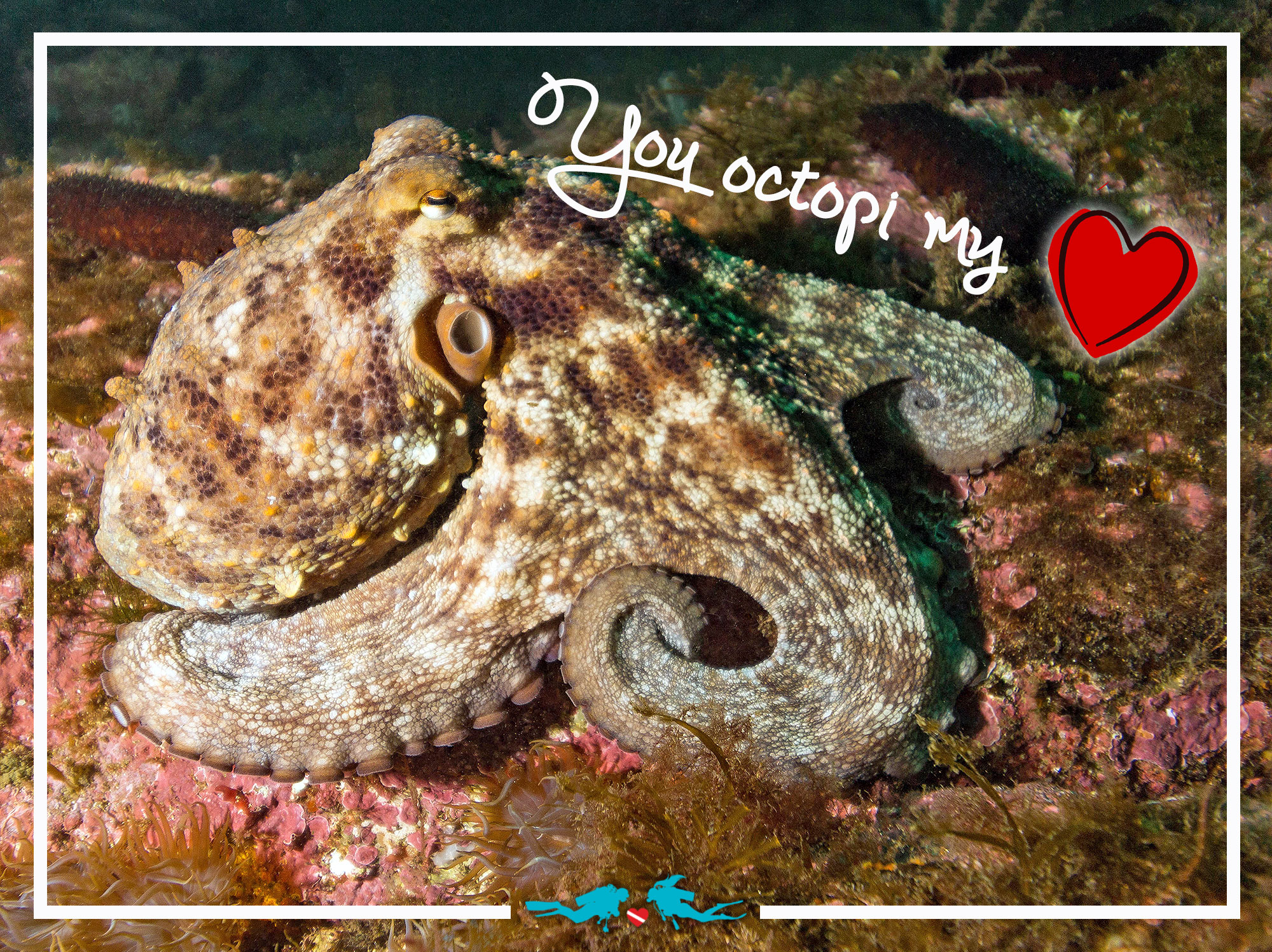 A pinch of love for you

At first glance, you’d think hard-shelled crabs would have a hard time doing it, but that couldn’t be further from the truth.

As a crab gets bigger, it goes through a process called molting, basically shedding its outer shell or exoskeleton. Molting is done to accommodate it’s expanding body. Once the exoskeleton has been removed the crab’s underlayer is much softer and takes some time to harden. It’s during this timeframe that most crabs tend to get frisky.

Some crabs will mate standing up, facing each other, but in most, the female will invert herself under the male – missionary style – wrapped in his clawed embrace. 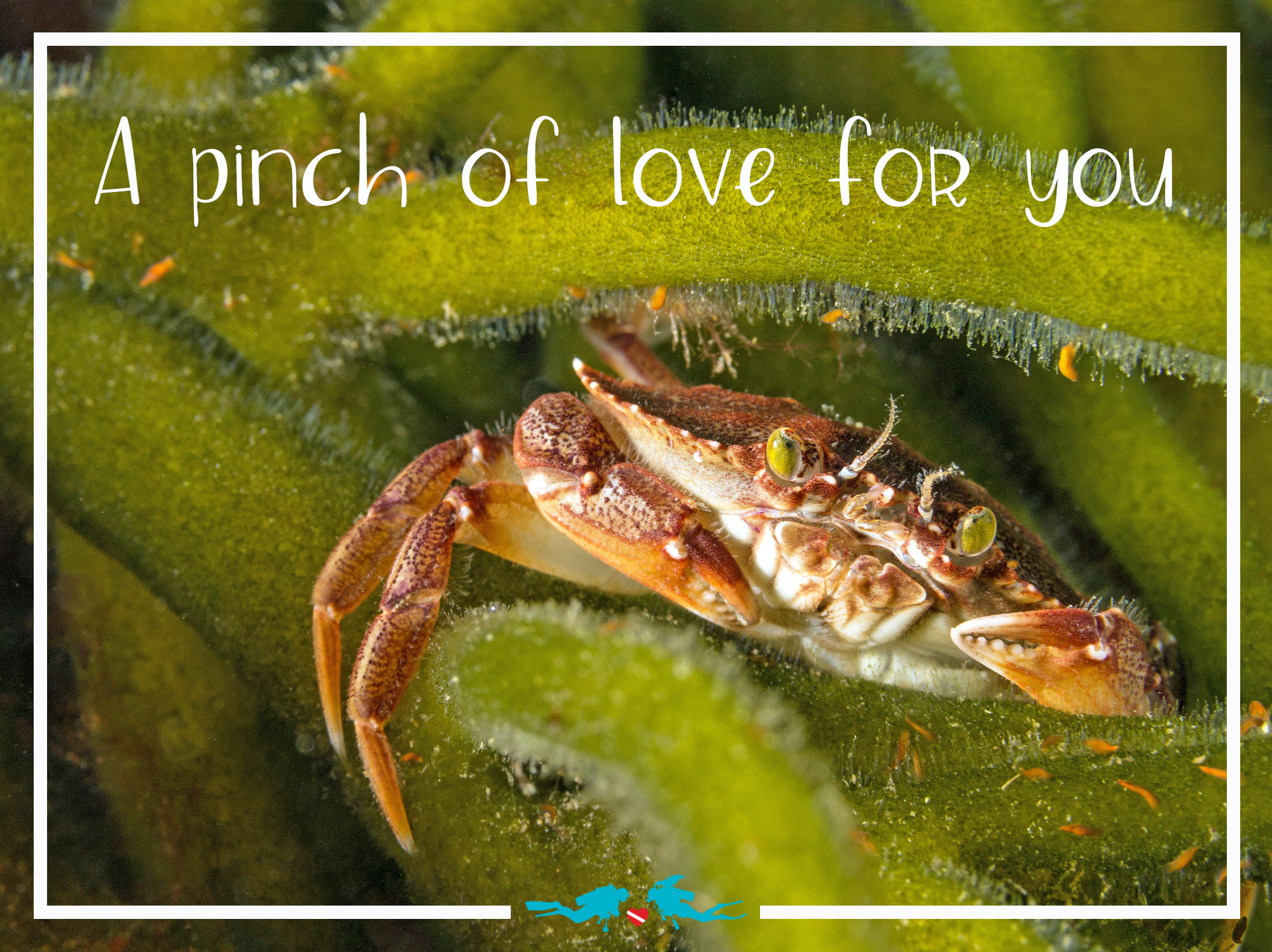 You are turtley amazing

Despite being cold-blooded reptiles, there is nothing that makes you feel warmer and fuzzier inside than to see a sea turtle majestically swimming by while scuba diving.

But when it comes to making love – that is a different story. Sea turtles mate on a first-come-first-serve basis with neither sex being too choosy on who they reproduce with.

In terms of the act itself, male sea turtles will hook onto the back shell of female turtles using the claw on their front flippers. They then use their long tail, which in male turtles is the equivalent of a penis, to insert in and copulate with the female.

Following the act, the male turtle’s job is not finished. He will “hang on for dear life” to the back of the females shell and try to prevent other males from mating with her, an act that can be somewhat painful as others will bite his tail and flippers. 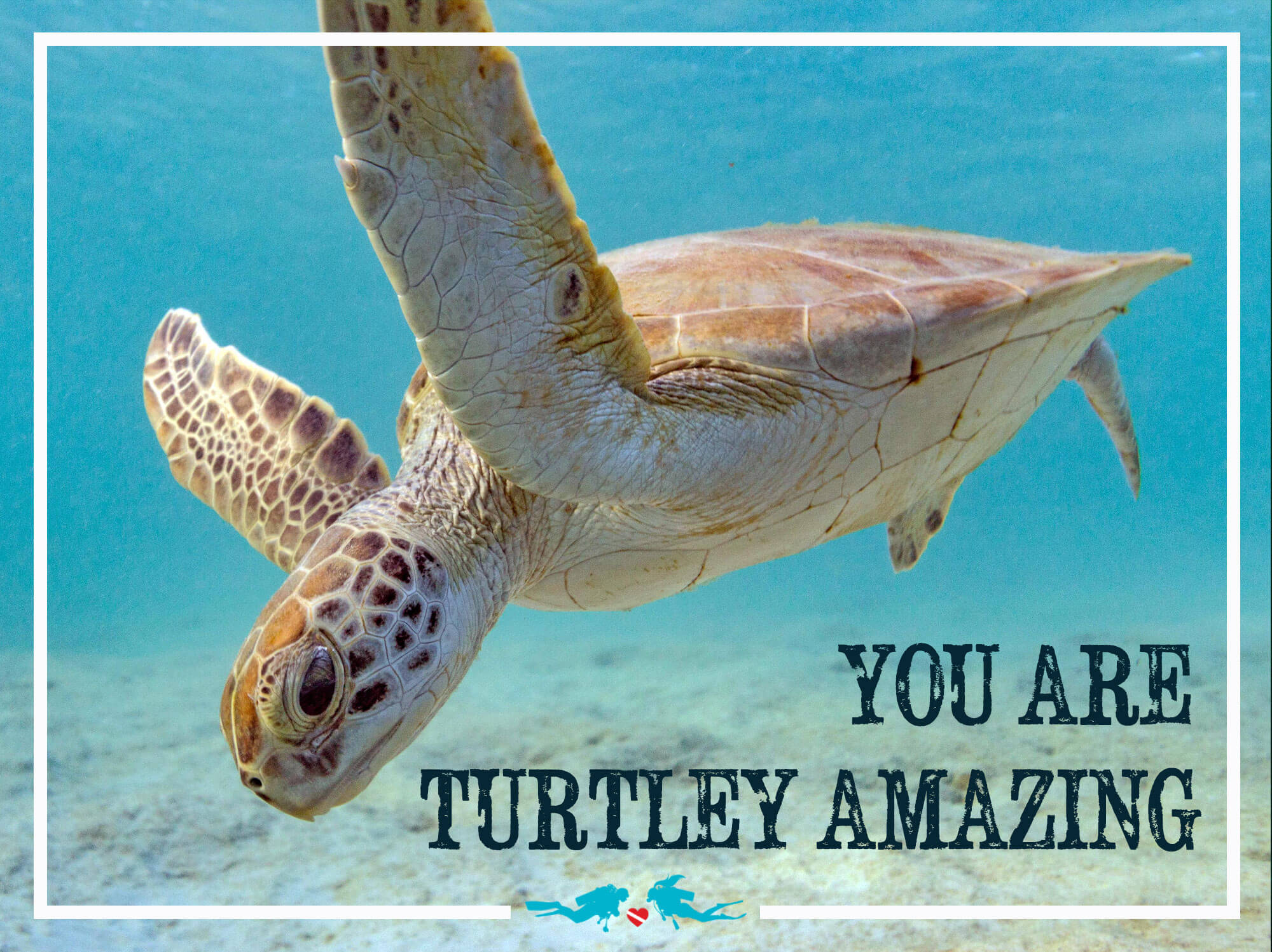 Cuttlefish lovemaking looks like something straight out of a karma sutra book.

To initiate mating, males will spread their arms wide enveloping the female in a head to head embrace. The embrace will last on average 2.4 minutes during which time the male will then inject sperm into the females mouth. With this sperm, the female will fertilize their eggs internally either by depositing it around the lining of her mouth or in a receptacle below her beak. 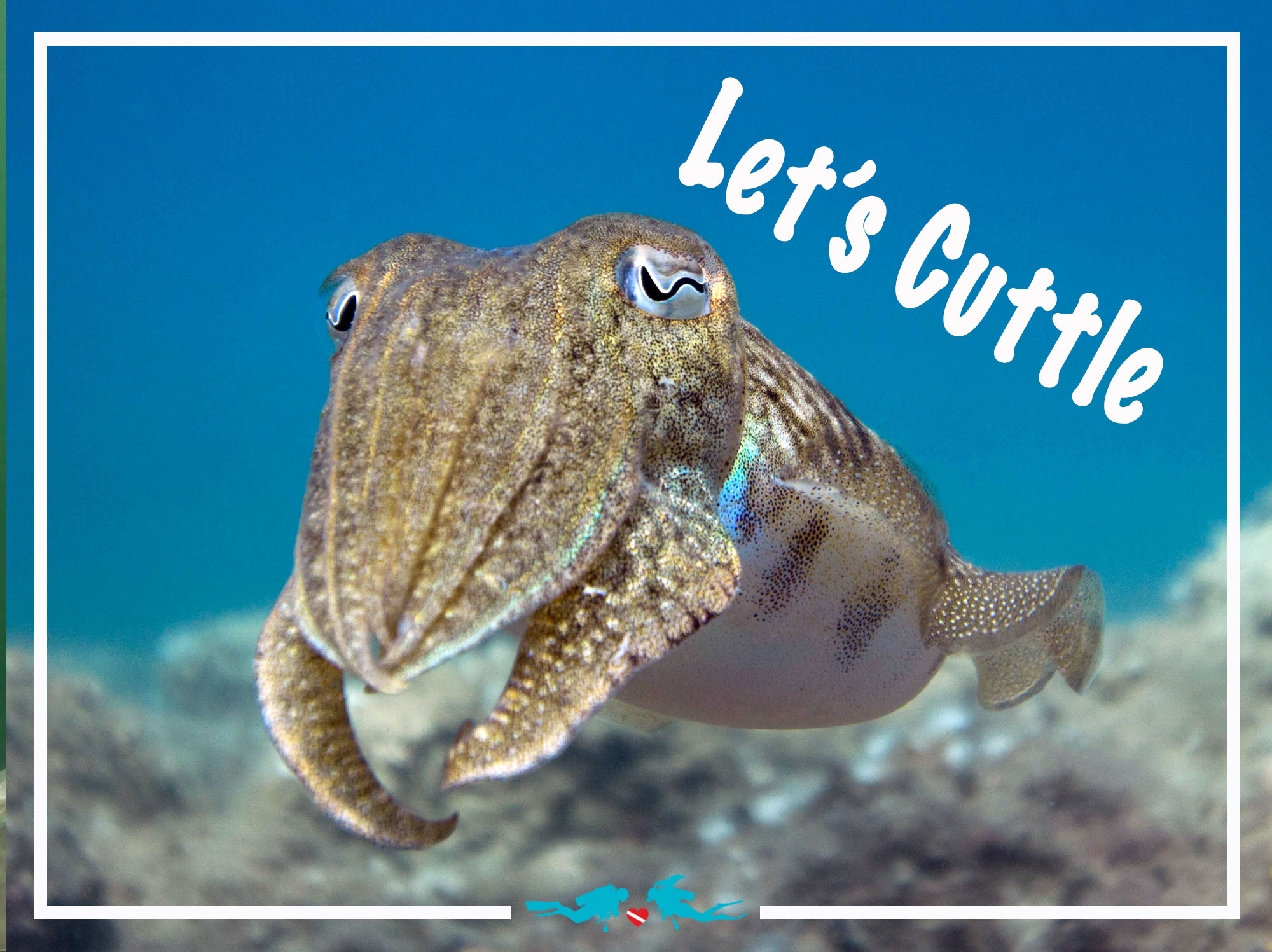 You should dolphinately be mine

Dolphins are known as highly intelligent and social creatures. That’s why it should come as no surprise that these traits extend to their sexual lives.

Under favorable conditions, most species of dolphins can reproduce whenever they want. That being said most dolphins tend to save their lovemaking sessions for after calving season. When the mating time arises, interested parties will engage in playful activities such as head butting and tooth scratching, lying on their side like a log. Some species of humpback dolphins have even been witnessed wooing females with large marine sponges as a gift. 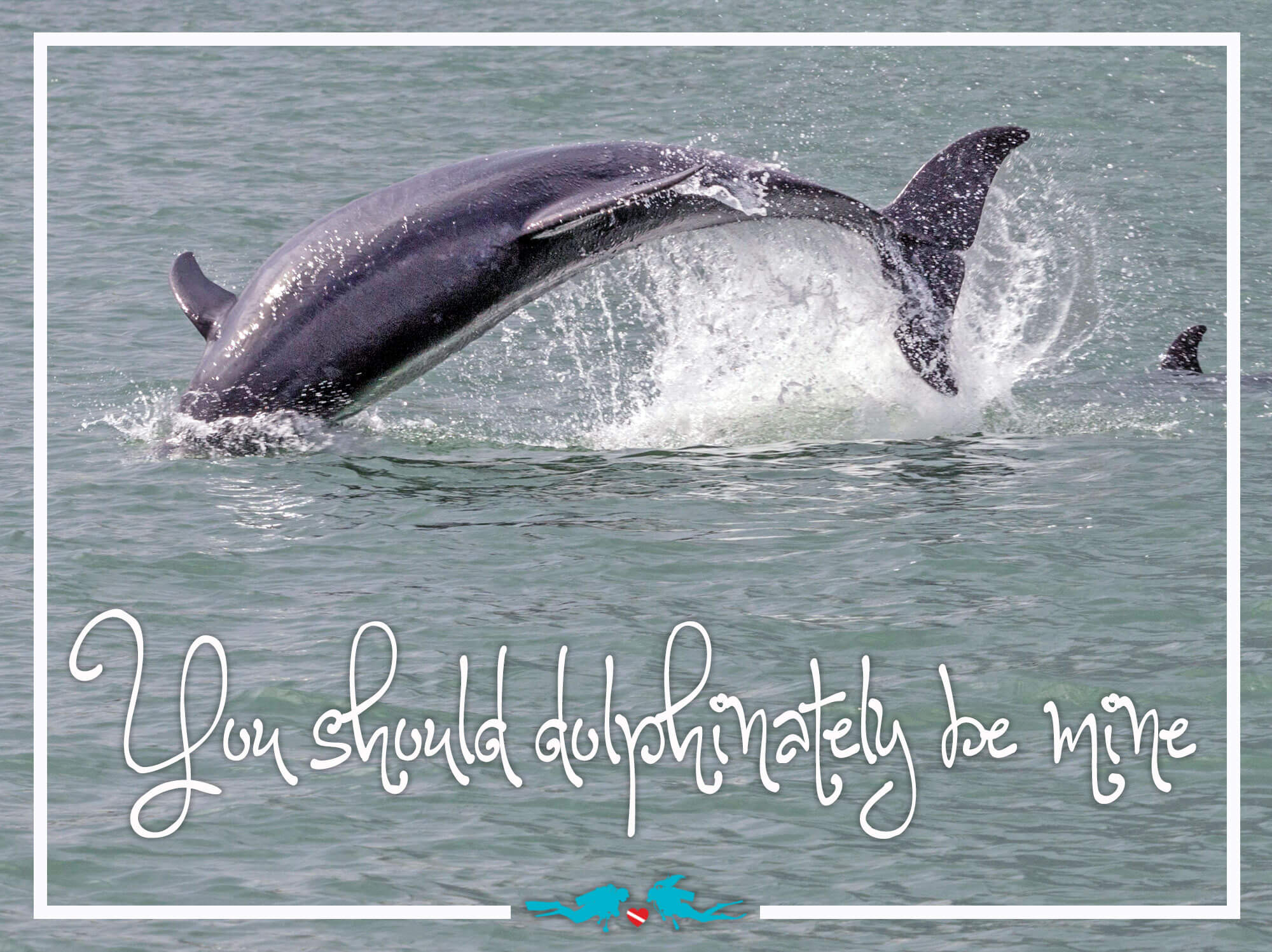 You are somefin special

What do sharks and Fifty Shades of Grey have in common?

Though not much is known about shark reproduction, when it comes to mating we do know that in sharks it can be rough.

Males sharks typically let a female know they are interested, by nipping at her body in various places. Once a female has selected her mate, the males will mount her either by swimming beside or underneath. This involves a lot of thrashing, rolling and biting and can leave the female with huge body gashes, deep enough to draw blood.

Aside from the rough lovemaking, the scandal doesn’t stop there. Some species of sharks can reproduce through parthenogenesis – that is without having sex – making mammals one of the only species in the animal kingdom needing a mate to reproduce. 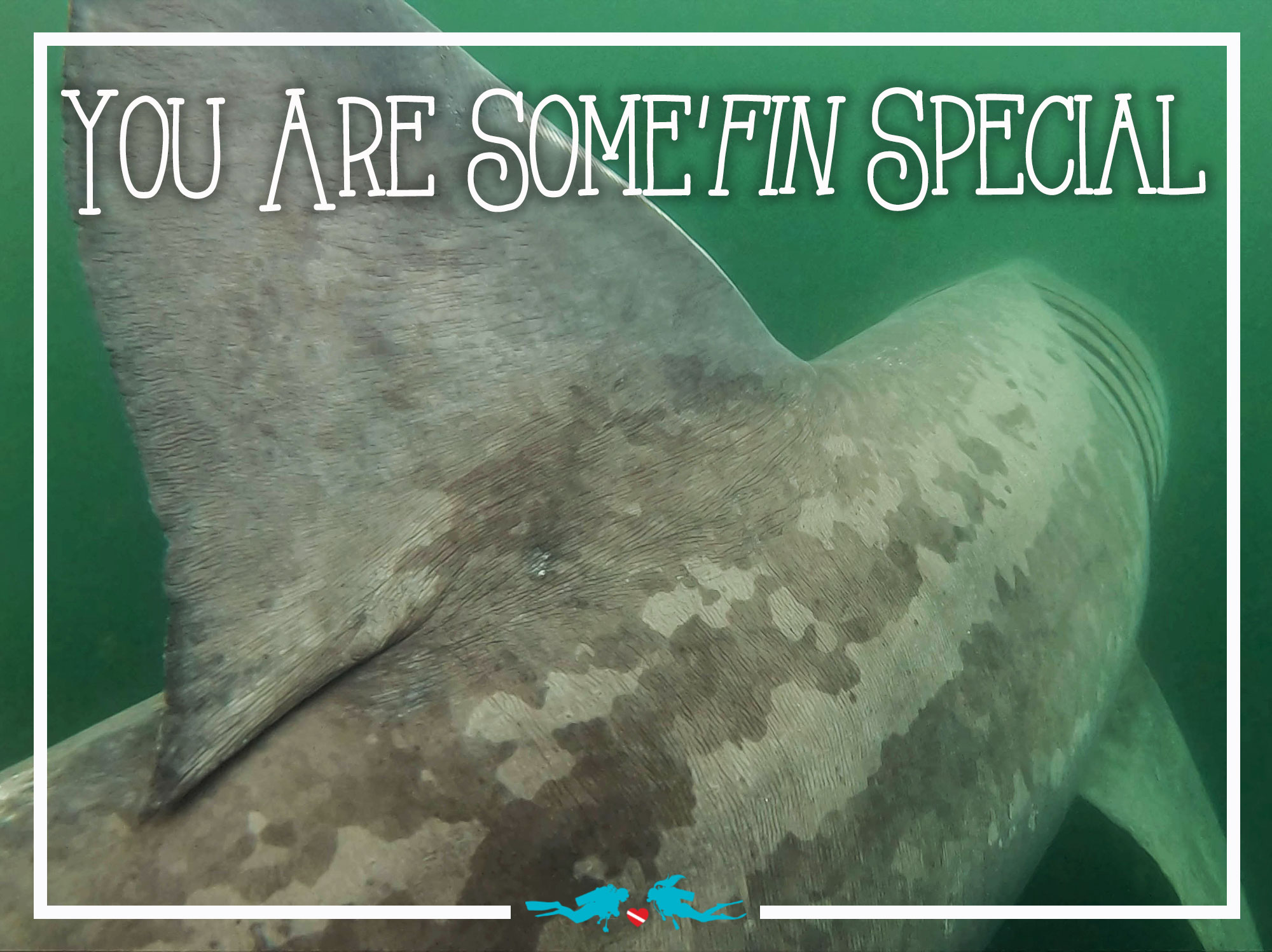 Happy Valentine’s Day everybody! We hope that you find a love that is as vast and deep as the ocean (10,994 meters to be exact).

Got any other funny ocean-themed Valentine’s day puns? Let us know in the comments below and maybe we will feature them? 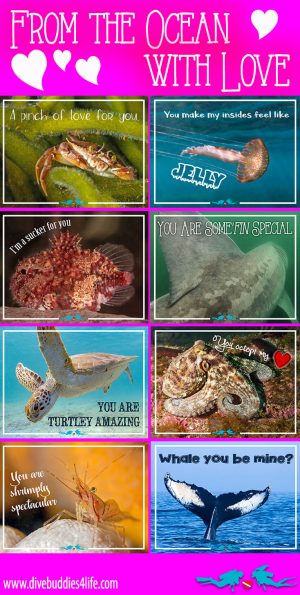