Every now and again, you get to experience something that is not only amazing but also life-changing. For us, this happened in the highlands of Scotland when we joined a research expedition to go snorkeling with the second largest fish in the world – basking sharks.

What are Basking Shark?

Basking sharks (Cetorhinus maximus) are a huge species of shark measuring between 6.5 to 9 meters long and weighing over 5 tonnes. Some can even grow to be over 10 meters. They are part of the Lamniform or mackerel shark order making their closest relatives species such as great whites, makos and porbeagles.

Of all the characteristics found in shark species, baskers are best known for this abnormally large sieve-like mouth, which when open can be up to 1 meter wide. This shark’s gigantic mouth is lined with gill rakers that strain plankton from the water when the shark is swimming. One of these large fish can filter roughly 2,000 tons of water through their mouths per hour.

Did you know? Three of the largest shark species feed on plankton. The largest planktivore is the whale shark, then the basking shark and finally the smallest and less known megamouth shark found in deeper water. 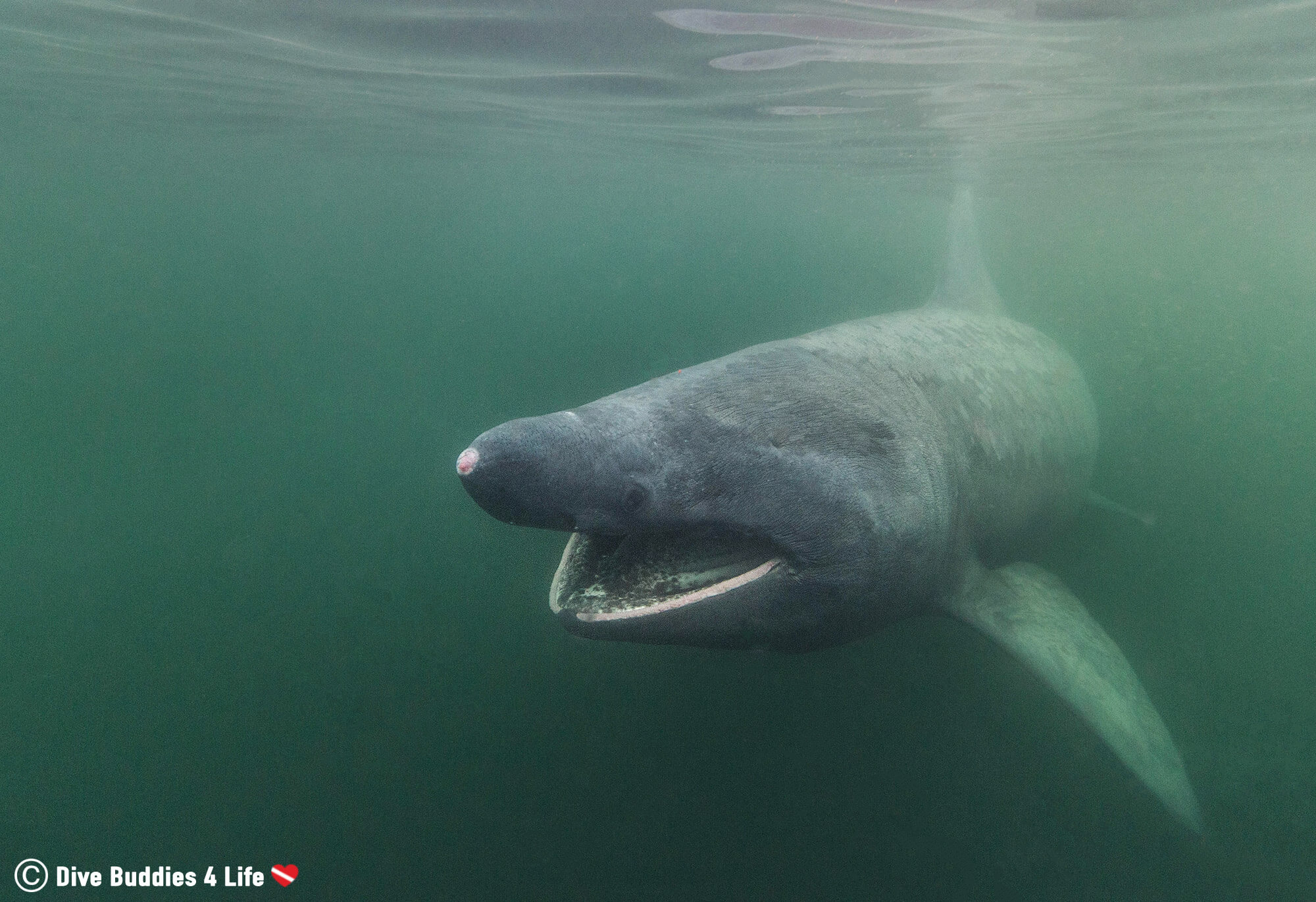 Where in the World Can you Find Basking Sharks?

The ocean is vast and basking sharks are an elusive species. They have a large migration pattern and don’t necessarily need to be at the surface for air. Tracking these animals can be tricky and there are many gaps in the research of these sharks.

We do know that basking sharks inhabit offshore and temperate waters (between 8°C to 14.5°C) throughout all the world’s oceans. They live around the continental shelf and occasionally enter brackish waters. Being a cosmopolitan species, some have also been tracked with satellite tags moving north and south and others across oceans, from one continent to another.

Of all the places that basking sharks roam, the world’s biggest hotspot is in the UK – specifically Scotland – likely because of the plankton-rich waters. Some of the most common places to sight basking sharks are in northern Scotland, in an area called the Hebrides as well as the Clyde. 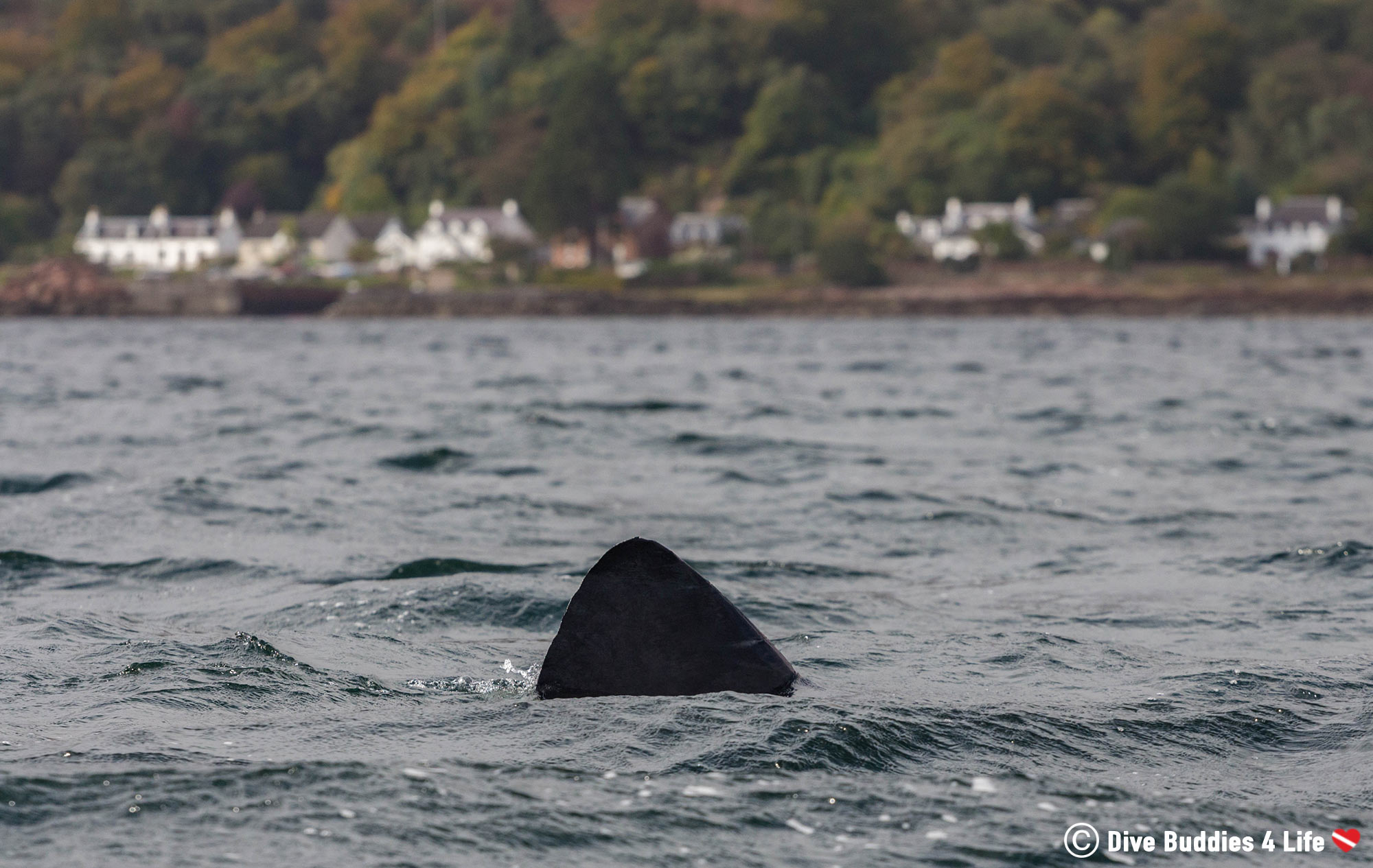 Our research hub was located in the Scottish highlands, about 2 hours from Glasgow in a remote area at the tip of the Dunoon peninsula. We stayed in quaint cottage-style accommodations that had 4 private bedrooms and shared washroom and cooking facilities per house. The farm-property even had two adorable donkeys, Barney and Louis, that would roam the field in search of head scratches and carrots.

Every day our group would board the research vessel and travel to our area of focus, about 45 minutes to 1 hour out of the channel and along the east side of the Isle of Arran.

Working on the boat, our main order of business was patrolling up and down the coast searching out the basking sharks distinct black dorsal. This involved a lot of patience and binocular scanning from left to right. If we were lucky, we would spot a dorsal and once we found one basker, we typically found more. They tended to aggregate and feed together in areas with lots of plankton.

As our trophy sharks would feed, the research vessel would cautiously circle and our group would grab left and right dorsal fin photographs for individual identification. While this may sound easy, sometimes it could prove to be a rather challenging feat as skittish sharks would surface and sink with no rhyme or reason. Once we had secured dorsal photo’s we would then take water samples. The water samples we collected were taken with a plankton net – one near the feeding site and one slightly distanced from the feeding site. These samples would be evaluated at the end of the day back at the lab to evaluate plankton densities and the presence of microplastics.

After collecting the necessary surface information, it was time for my favourite part, to gear up and slip into the water. From beneath the waves we would be tasked with identifying the shark’s gender and getting photo and video images of the pigmentation and body markings for future reference. 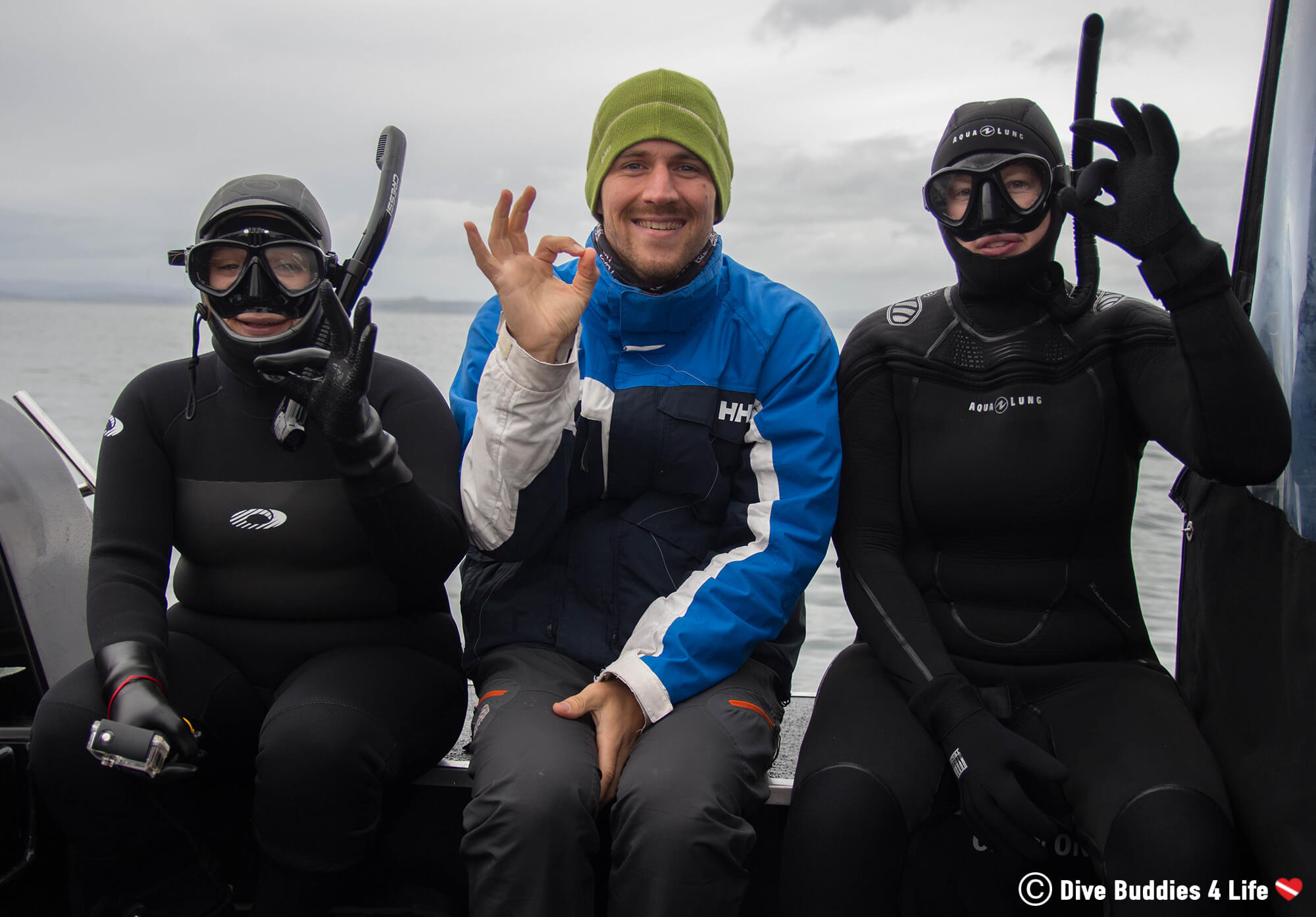 For Joey and I, the first frisson of excitement came within the first hour of the first day. We had found a small group of basking sharks and slipped off the boat into their midst. Almost the instant we turned around to push off the boat, out of the green plankton the largest gaping mouth I had ever seen, came gliding gently past.

It was one thing to see this animal from the dry deck of the boat. It was another to be parked in front of its mouth, small and insignificant, realizing I could be swallowed whole. It really gave me an appreciation for how big these sharks really are.

Following our days spent on the boat, we would return to shore thriving on adrenaline and fresh out of the water. The first order of business was carting all the gear from the boat to the lodge where it would be cleaned and hung to dry. We would them assemble in the main building where we would catalogue the collected shark images (left and right dorsal, body image and sex) attempting to piece together an entire individual. The shark’s dorsal fin is similar to a human fingerprint in that you can use it to ID specific individuals. They can also have unique markings such as parasite scars, notches, cuts, blotches and striations which also assist with identification.

While some worked on sorting the images others would process each plankton sample. We would dilute and count large versus small calanoid copepods (the primary food of choice for Basking sharks) to determine the concentrations found where the sharks were feeding. With that same sample we would also process and count the microplastic contamination in the water. These sharks filter microscopic food sources from the water and with so much plastic entering the ocean broken down into small particles, the effect on the sharks’ gill rakers and from ingesting these microplastics is unknown. Hopefully the data from this study will help showcase how marine debris and microplastics are a significant threat to basking sharks. 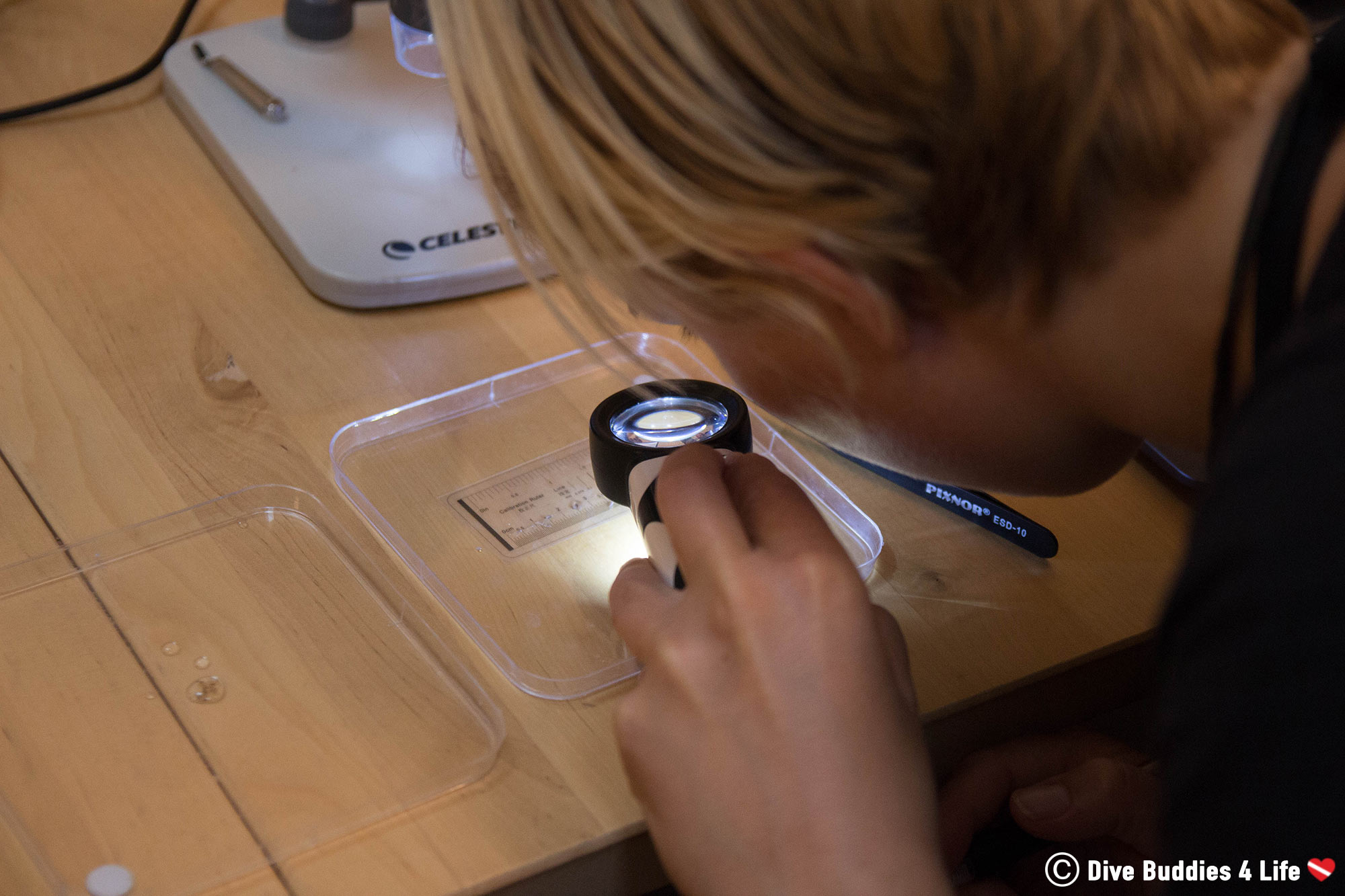 A Recap on Swimming and Studying Basking Sharks

Joey and I were both over the moon to join a basking shark research expedition in Scotland’s Firth of Clyde. We had never been swimming close to something so large and were more than ready to brave the cold north Atlantic for some big-animal excitement.

We can only speculate as to what happens up the political food chain but by admitting there is something wrong ultimately means governments will need to take action and take stronger measures to protect them. No shark finning, stronger fishing and trawling regulations. While the UK is ready to do this the rest of the world isn’t.

Through citizen science projects such as the one we participated in, the research collected can help scientists gain a better understanding of the basking shark as a species. If over the years enough data can be collected proving that significant numbers of sharks are returning to specific areas seasonally, perhaps MPAs (Marine Protected Areas) and no trawling zones will be put in place to ensure the prosperity of this amazing animal. 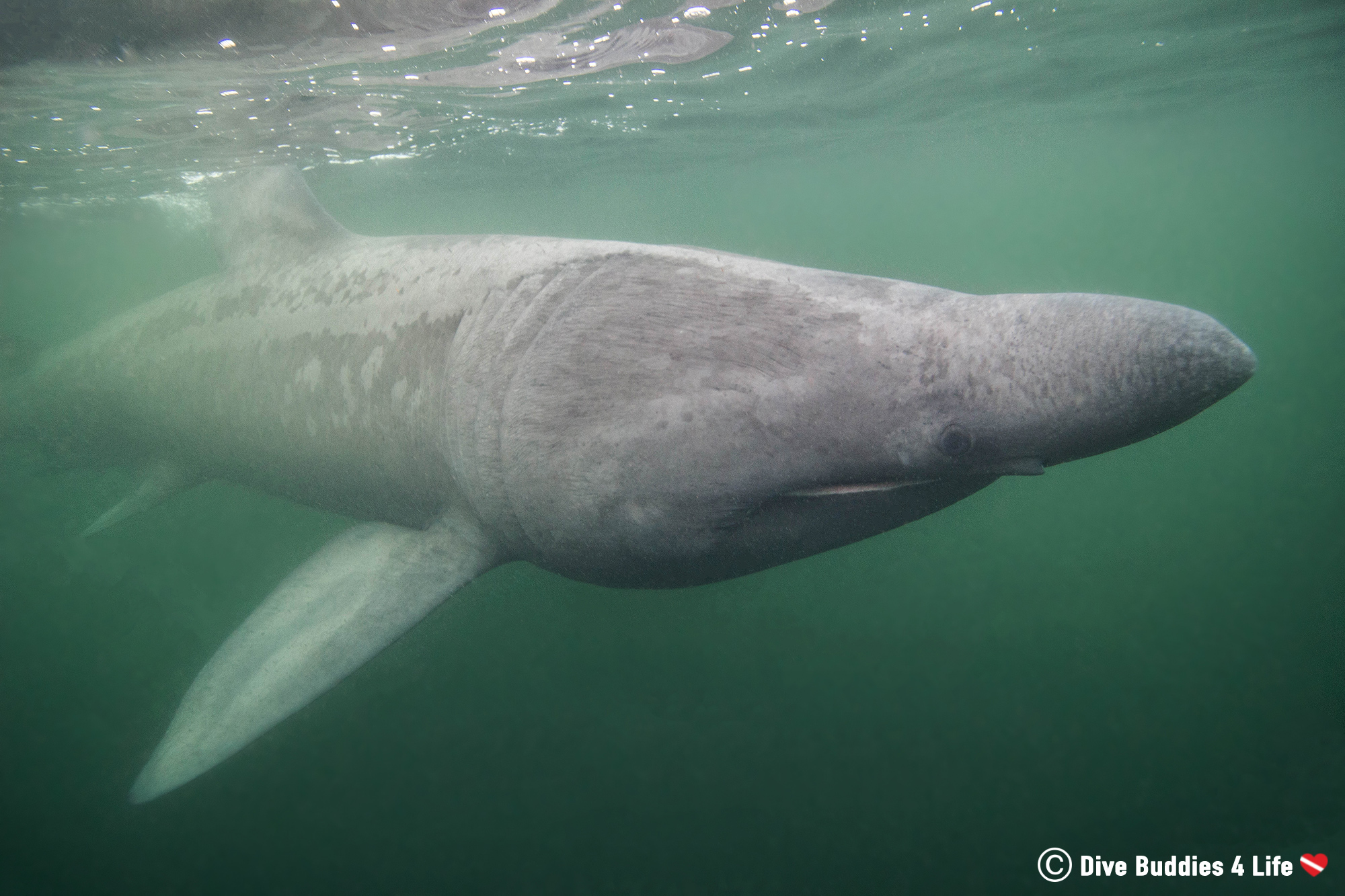 Have you ever gone swimming with Basking sharks? How seemingly small and insignificant did you feel? Where did you get in the water with these gigantic beasts? 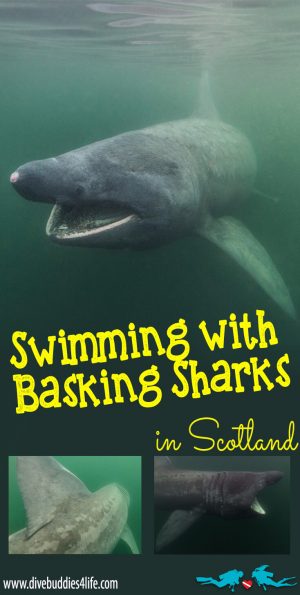