Interesting but sad news for turtle lovers far and wide – a 360 kilogram leatherback turtle was found washed up dead along a lake near Islandview, Cape Breton. 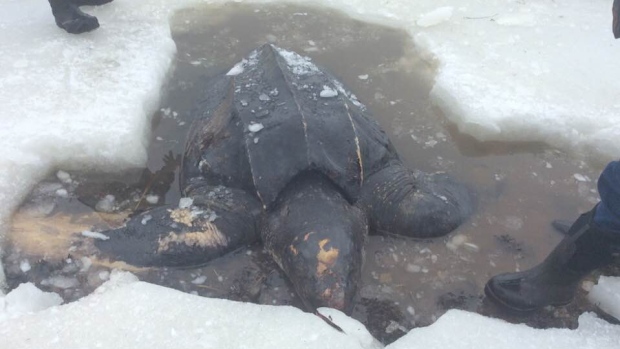 Residents of northern Nova Scotia have seen quite a few strange things over the years but never has something like this washed up from Bras d’Or Lake.

Last week a local Cape Bretoner, Ron MacLean, was out walking the shores in front of his home when he stumbled across this deceased Leatherback turtle, measuring about two meters from tip to tail and one meter across the shell.

When I touched it it was floating a bit, so it wasn’t moving, so I knew it was dead, but it was in good condition. It didn’t look like it was there that long, but that would be because, with the ice and the cold and such.”

As you can probably imagine moving such a large animal from the ice, all while keeping its integrity is no easy feat. The effort required tactful maneuvering and the help of some sturdy wooden ramps and heavy machinery. 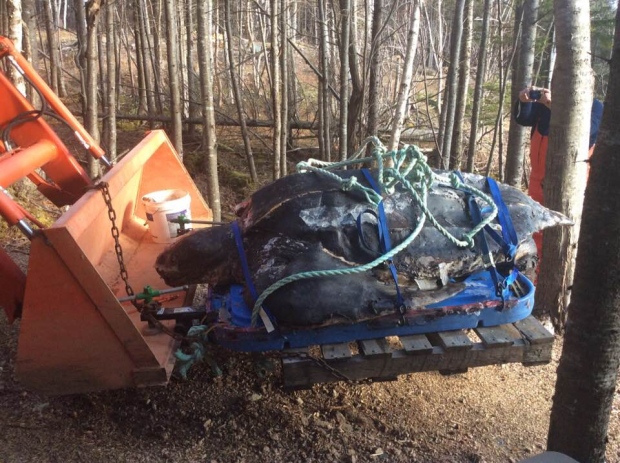 For those who don’t know much about Leatherback turtles; this cold-blooded creature is one of the world’s largest reptiles and can reach more than two meters in length weighing more than 900 kilograms. According to DFO (Department of Fisheries and Oceans), Leatherbacks are known to swim up to 12,000 kilometers a year and dive to depths of up to 1.2 kilometers.

As much as sea turtles have been spotted along Nova Scotia and Cape Breton’s shoreline during the summer, they typically move to warmer tropical waters in the winter time for nesting.

Anytime a leatherback turtle is spotted on the shores of Nova Scotia or Cape Breton, it is important to call DFO or the Sea Turtle Network immediately with as much information as possible. Because these animals only nest in southern countries, it could be very likely that they are in distress.

Why this big guy ended up so far north in the winter, is still a mystery but a few scientists have some very plausible hypothesis.

Given the Leatherback endangered species status, finding one dead is always a blow to the population, but this death will not be in vain. Since its discovery, the animal carcass has been removed and transported to the Atlantic Veterinary College in Charlottetown PEI for a follow-up necropsy.

Here scientists will be able to collect as much information as possible on this species, and hopefully use some of this data to eventually help this turtle population rebound. 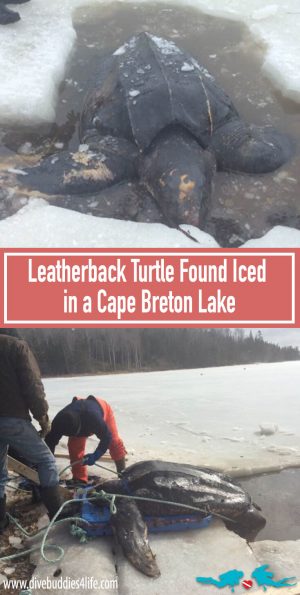