From the dizzying coastal vistas to the ice-cold bergs drifting down from the north, the Canadian province of Newfoundland is a place chock-full of ocean life. As a pair of scuba divers having lived in Atlantic Canada for many years, it wasn’t until Joey and I moved away that we discovered what a diamond in the rough this place truly is. 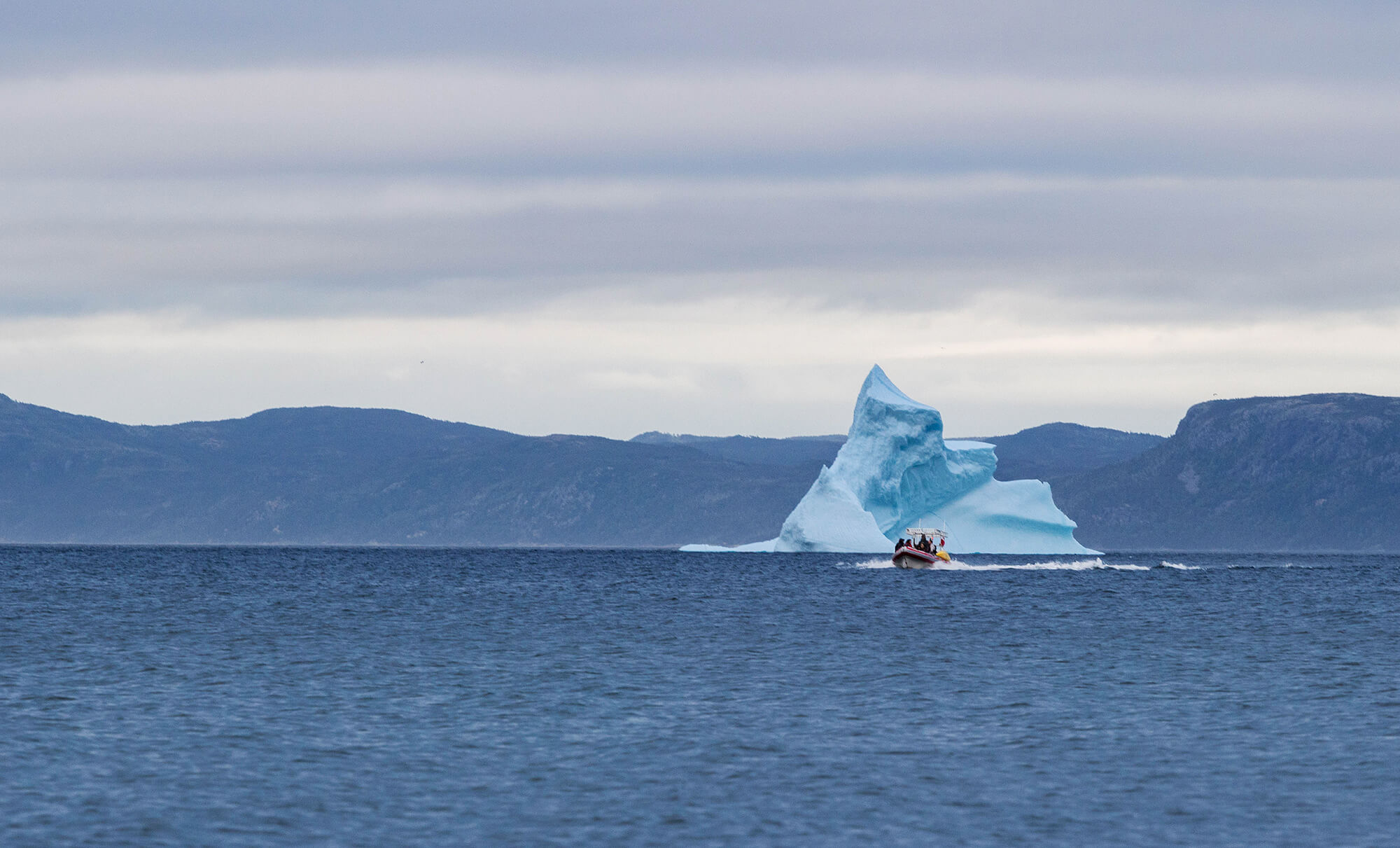 Located adjacent to Conception Bay, a place known for the Bell Island shipwrecks, Trinity Bay is a historic and well-protected coastline running from Grates Point on the tip of the Avalon Peninsula to Bonavista. The bay is at the heart of Newfoundland’s history, where explorer, John Cabot, discovered the Western World when he arrived at Bonavista in 1497.

Trinity Bay shelters superb fishing grounds and is indented with numerous coves and harbours, the largest being Trinity on the north-west shore. Beyond the strong fishing ties that many of Trinity’s villages still hold near and dear to their heart, this snaking expanse of shoreline also has strong ties to the whaling industry. 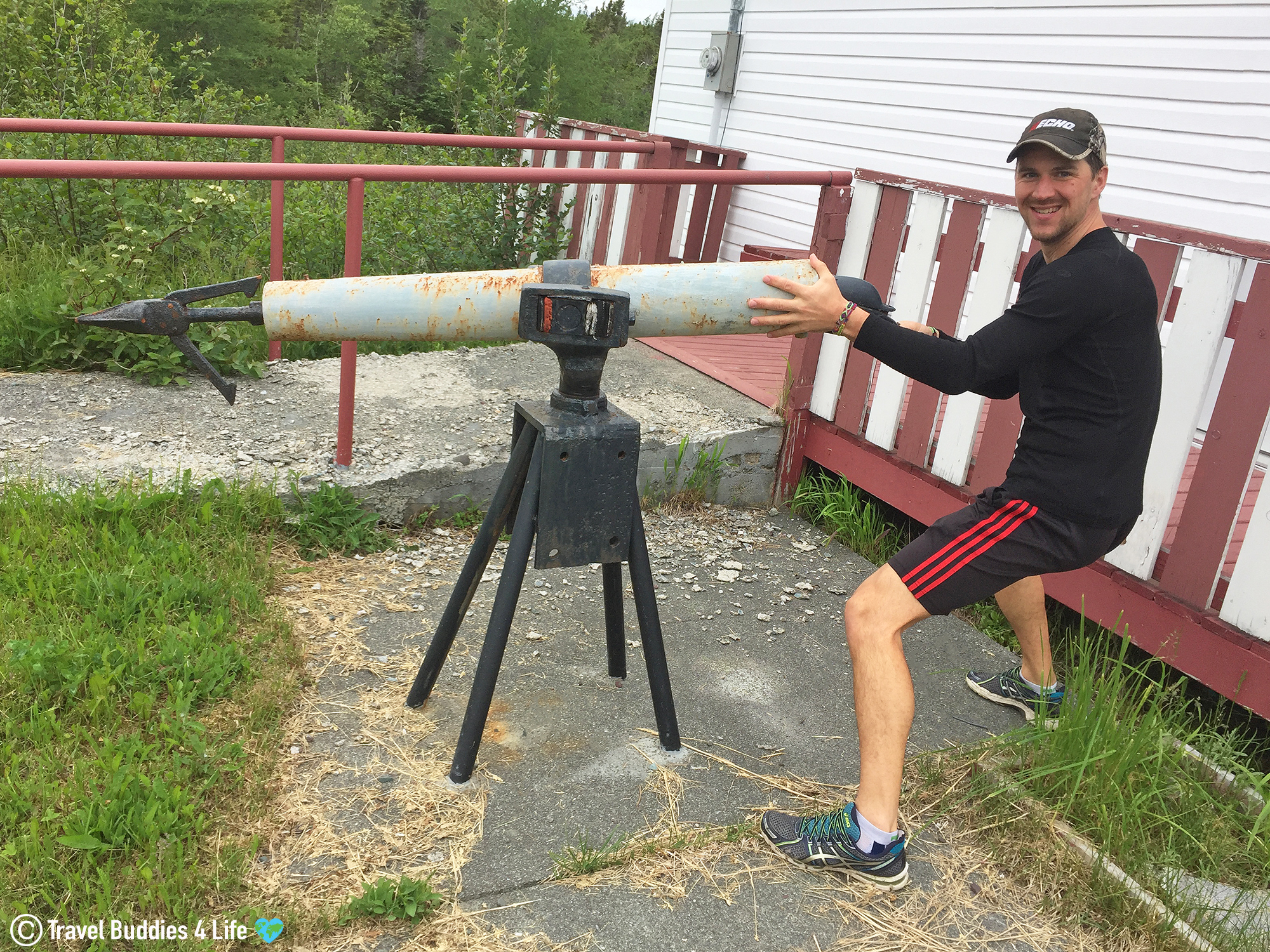 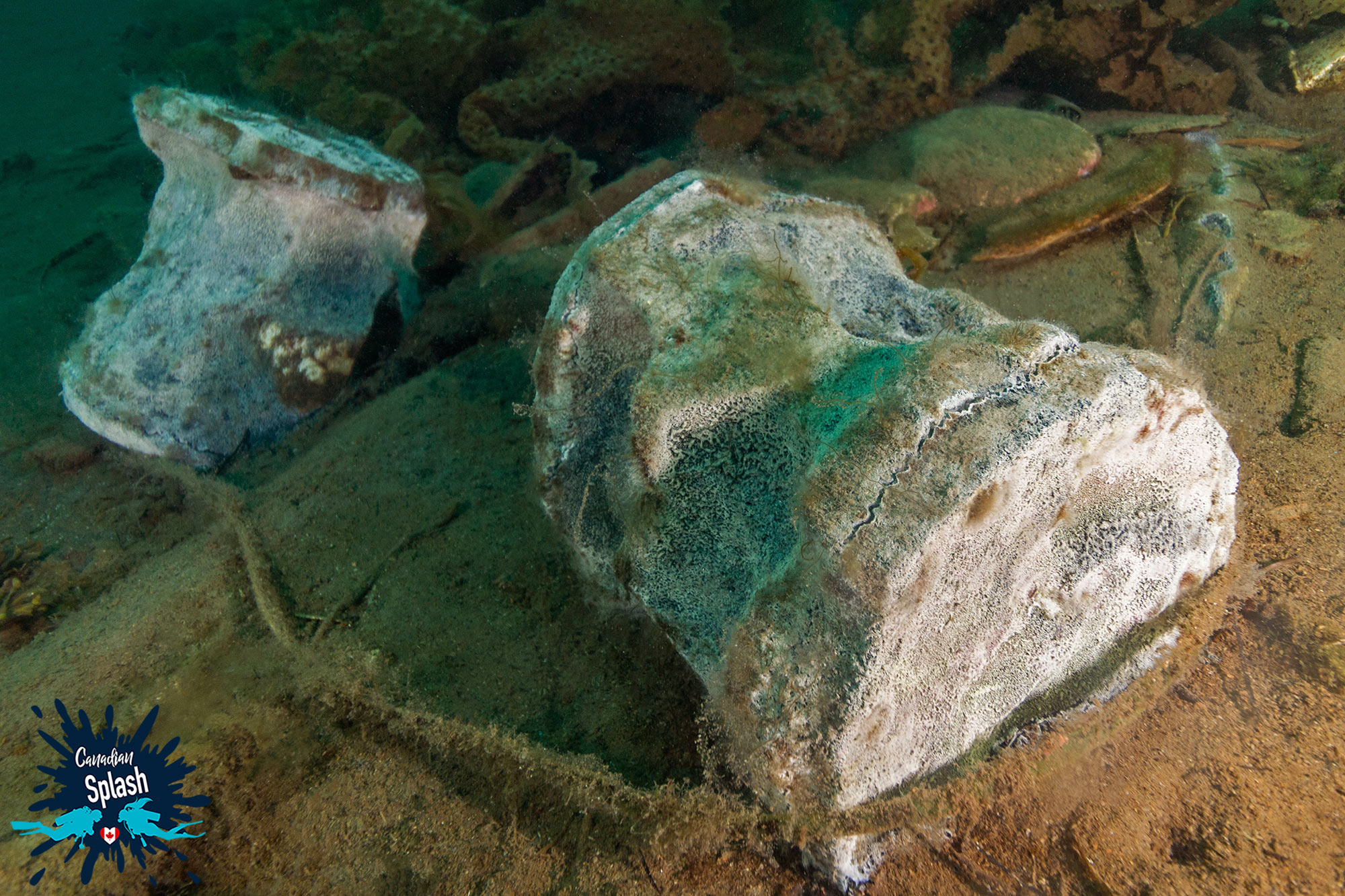 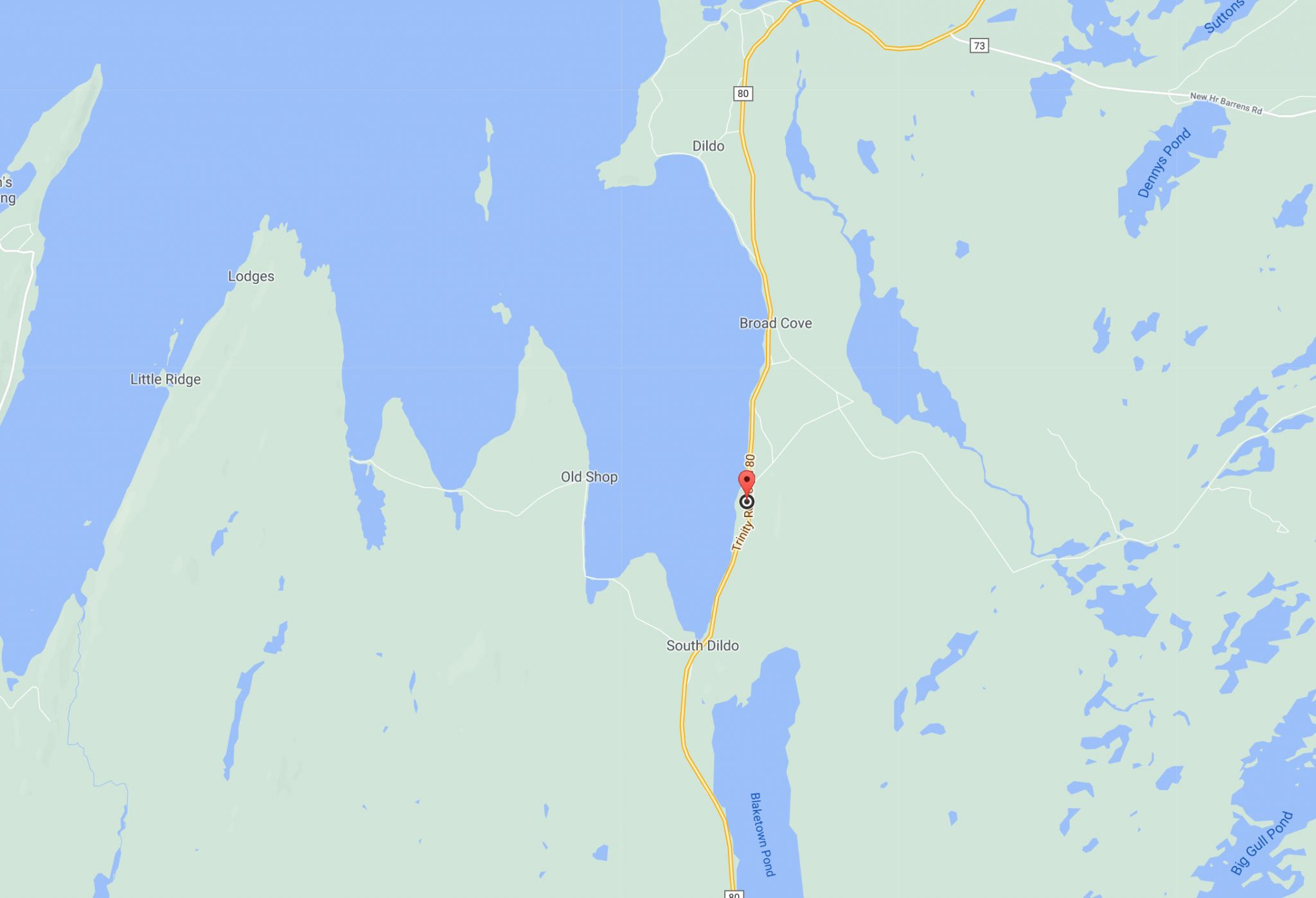 Preparing to dive into Dildo’s blubbery past, Joey and I took advantage of the beach access next to the wharf in order to get into the water. Overall the site had a very industrial feel. We were surrounded by factory-like buildings and had I not been given specific coordinates to the site, I might never have found the place. 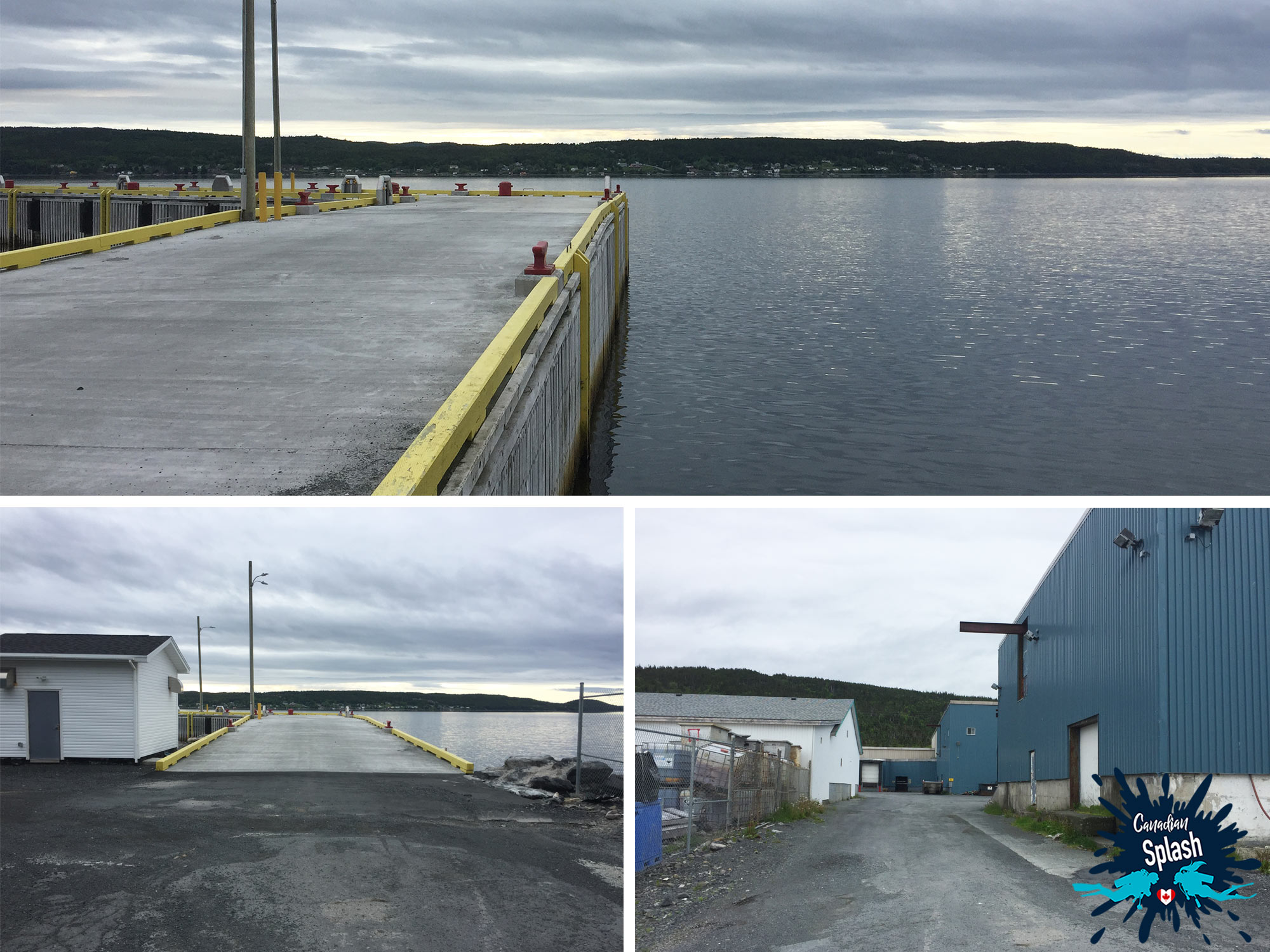 Descending down the sandy shore we waded out into waist-deep water which was eerily still. The gloomy overcast weather, made me feel like I was about to invade some sacred graveyard. In silence, we finished kitting up and slipped below the tranquil surface.

The bottom was muddy, not the sandy mud I’m accustomed to but a dark organically rich mud. It looked thick and goopy and with one fin kick made the visibility next to nothing. On top of the mud, rocks peppered the bottom and hugging those rocks were purple tones of sea stars.

Following the wharf and staying in the sunny 5-meter (15-foot) shallows we took in our first impressions of the dive site. Overall this section of Trinity Bay was darker and murkier than our previous shore dives in Conception Bay. Near the wharf, there was an abundance of kelp waving everywhere. There were also cheeky cunners acting like thieves. It was like being in a snowstorm but every flake was a silver-bodied fish. They loved to frolic in and out of the kelp pieces. 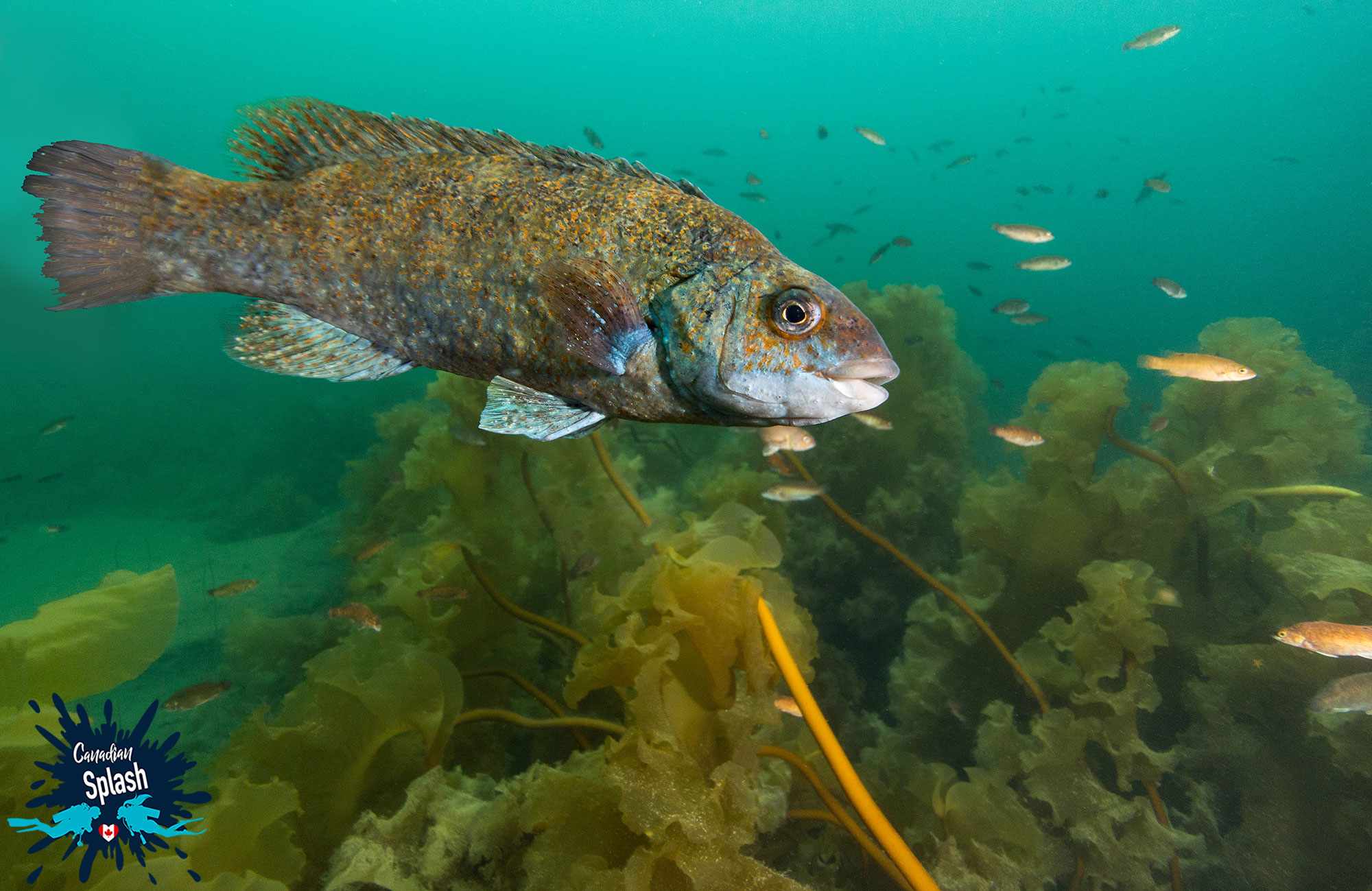 Apart from the flurry of cunners and kelp, there were also crabs, snails and sculpin. The creature lurked on the brown benthos in search of their next meal. I loved to watch them and it was not surprising that these scavengers were unaffected by my presence. As a notable diving location, thanks to the discarded whale bones, I’m sure these critters have had many-a-scuba diver encounters over the years. 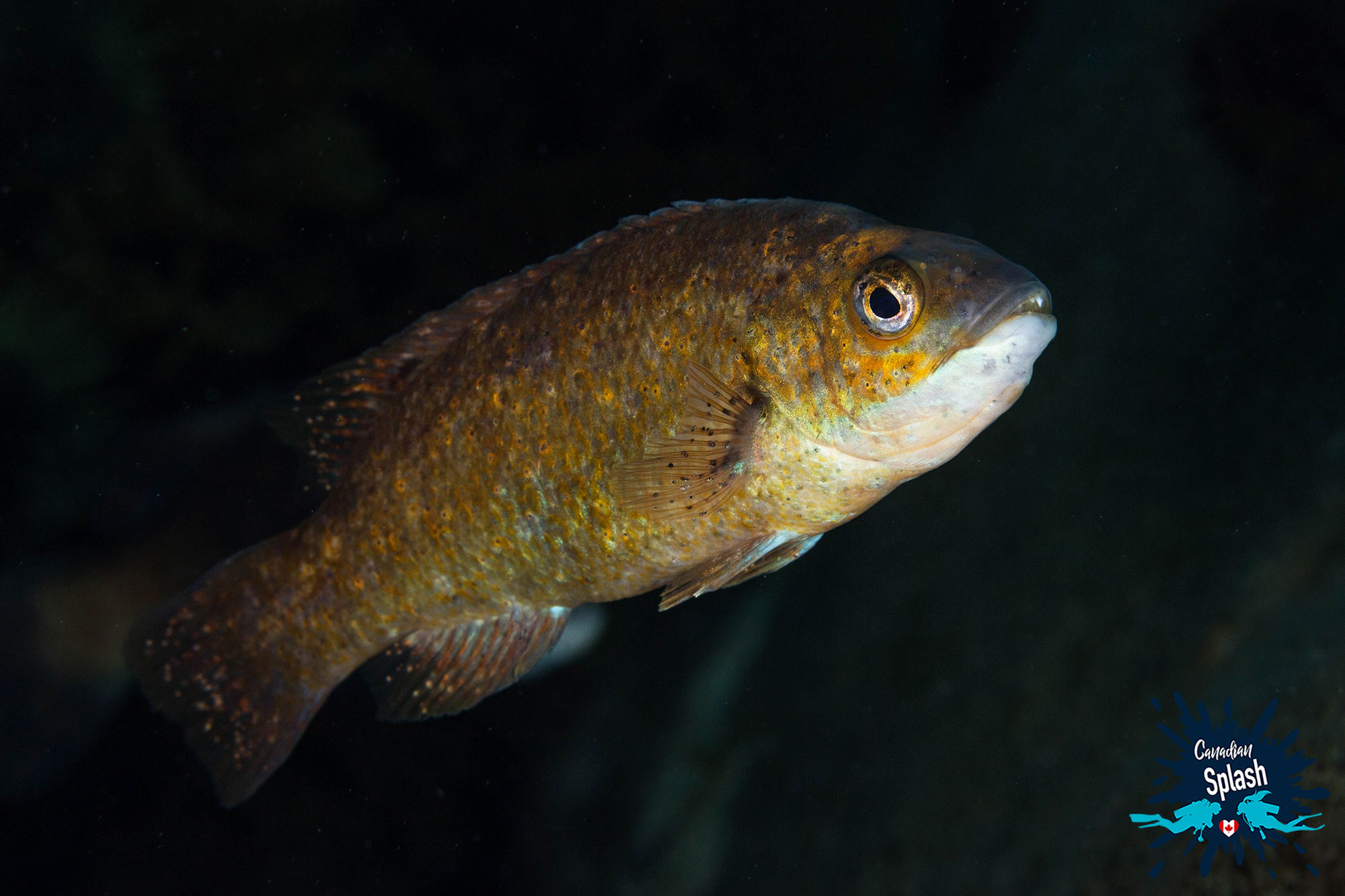 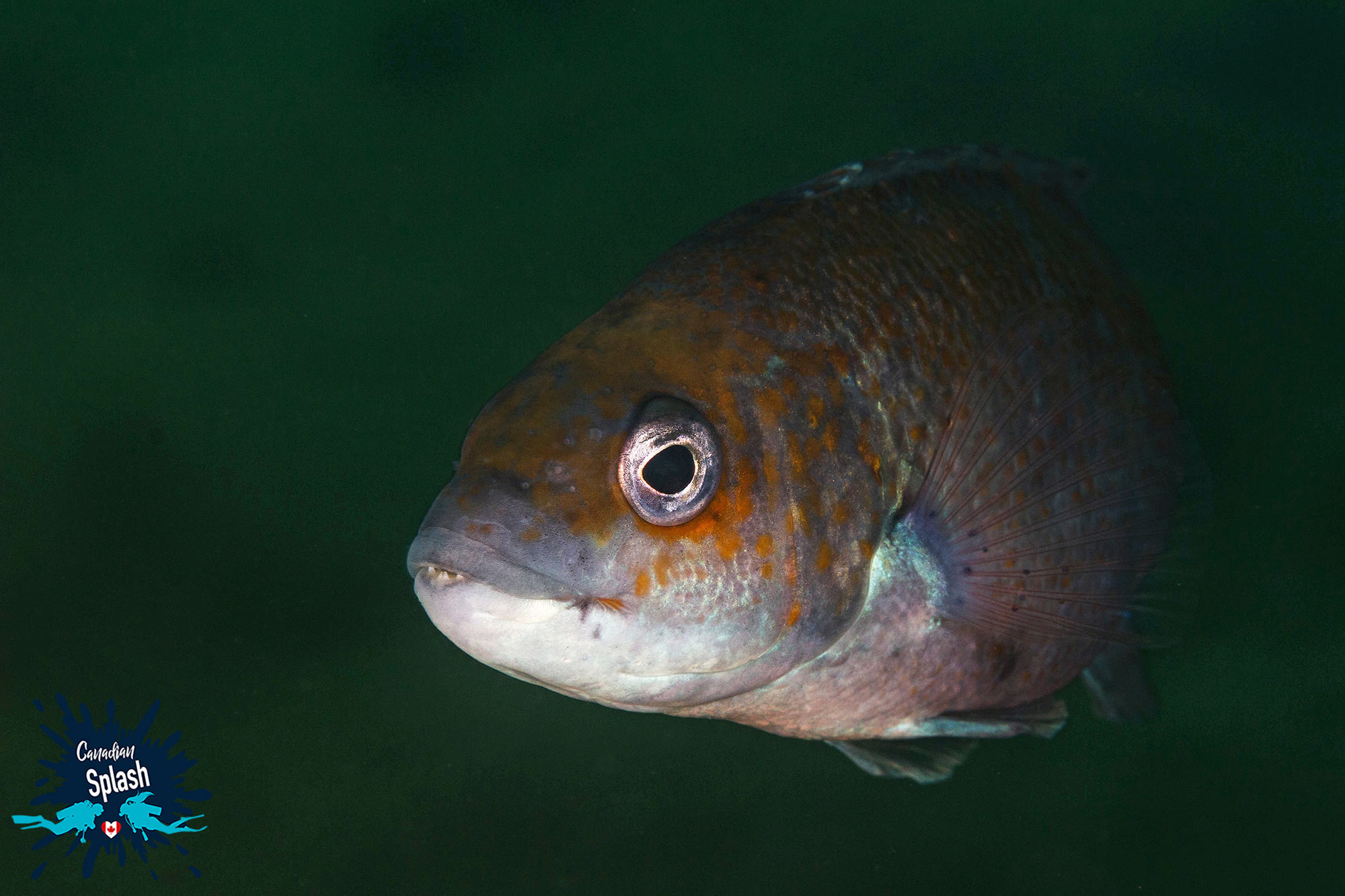 It takes a few seconds to register what I’m floating beside – our first whalebone.

The bones were not what I expected. They were excessively porus – likely from microscopic bugs and worms. It reminded me almost of a sponge. I was surprised at how intact and white the bone appeared even after several decades underwater.

During the dive, Joey and I had the chance to find whale ribs, jawbones and vertebrates. All of the bones had become home to other marine life, over the course of time. It was a humbling experience to see and swim in this bone graveyard and imagine the mammoth-sized animal, from which they belonged. 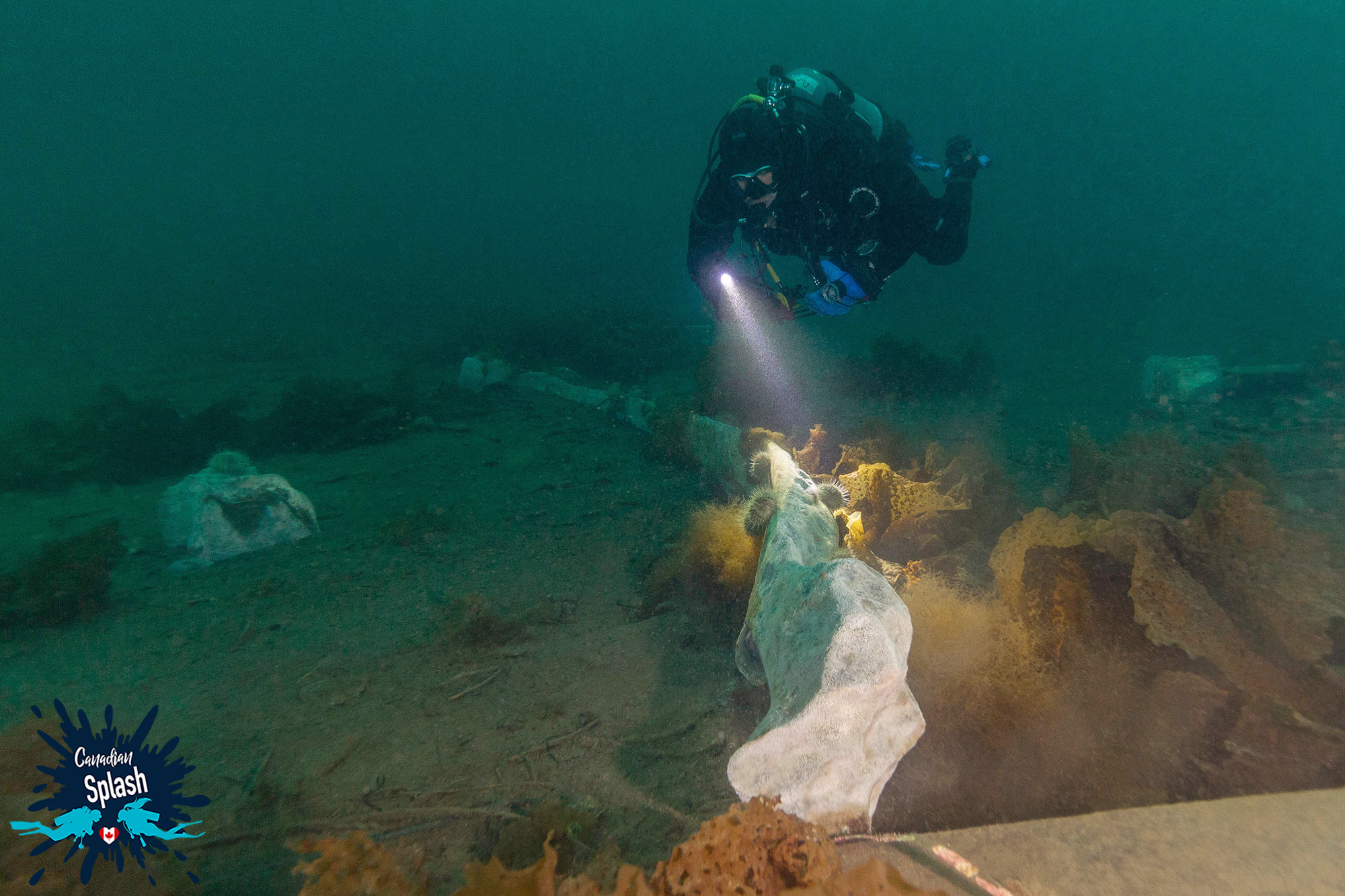 I went scuba diving in a whale boneyard – now that’s something I never imagined myself saying! 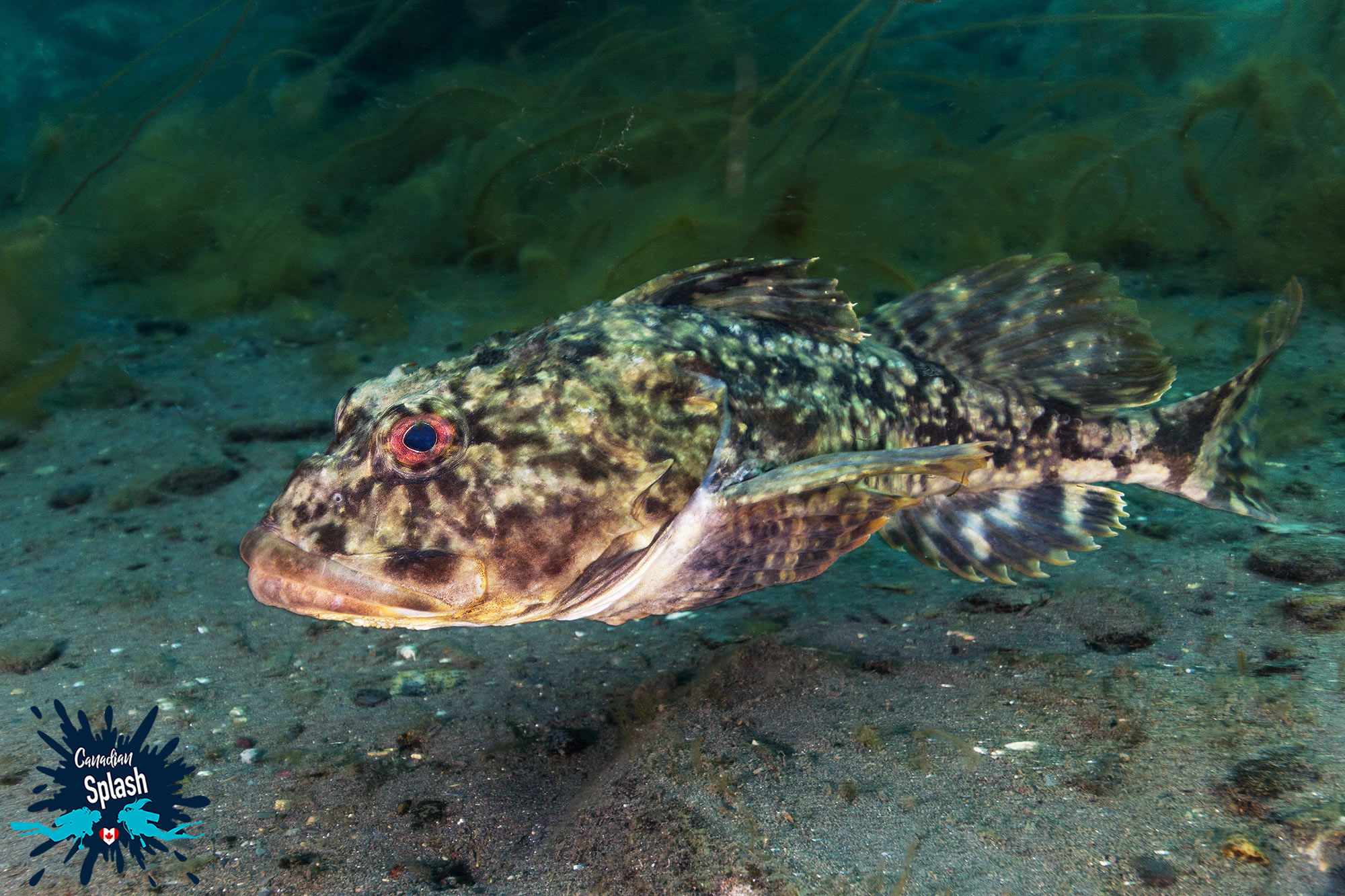 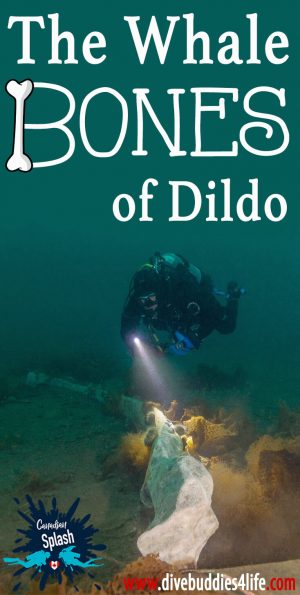