I feel a surge of excitement as the ferry approaches Grand Manan Island. At first, it appears as a barren mass in the middle of Fundy, but as we close in on this lone island, cars, houses and lighthouse slowly materialize. Heading towards our vehicle after 90 minutes at sea, we prepare for docking.

Joey and I are no strangers to scuba diving in New Brunswick. We have dove the Bay of Fundy time and time again savoring some memorable critter encounters and interesting moments. But until now, Grand Manan Island has remained ever elusive. 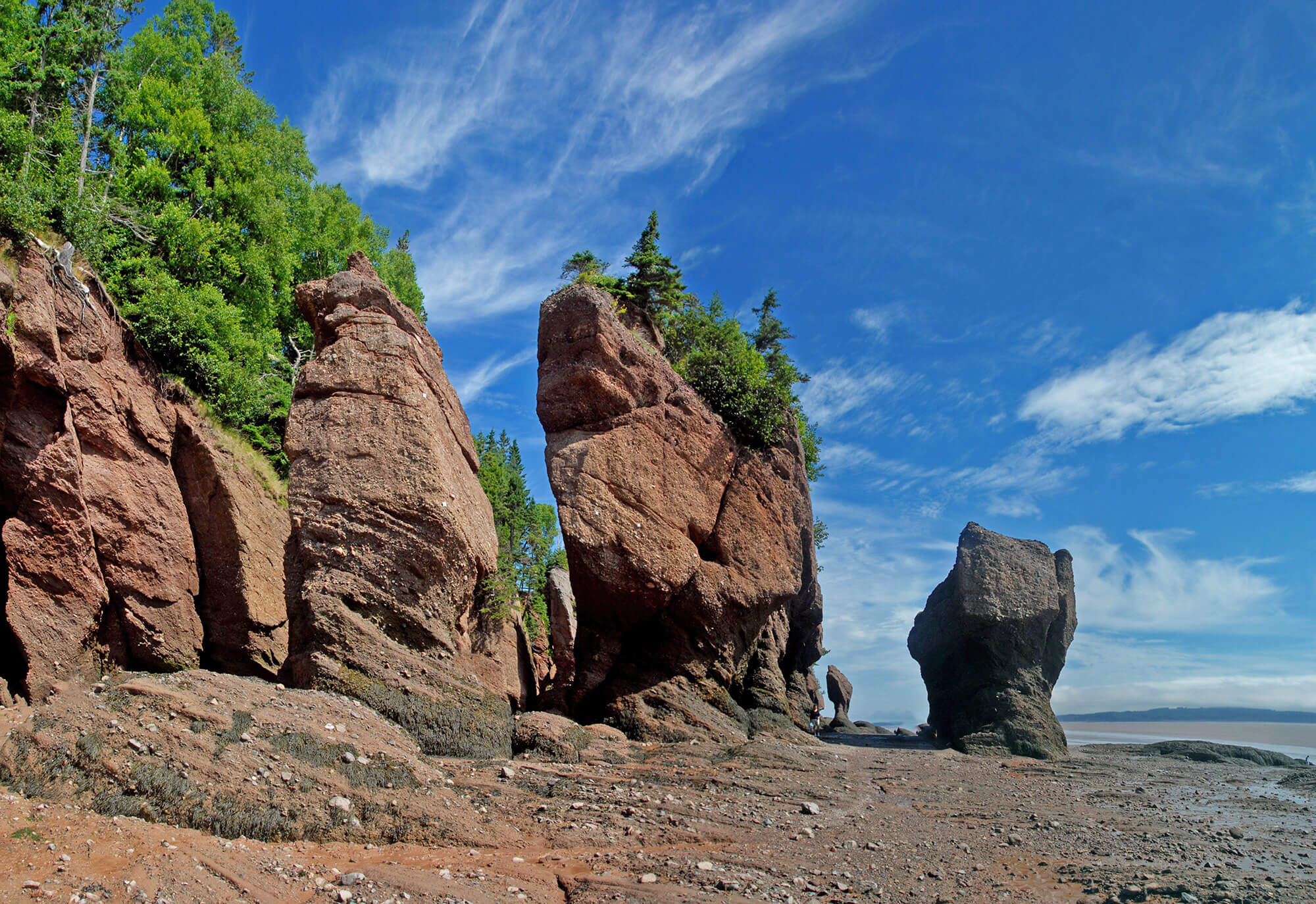 Read More on Scuba Diving in New Brunswick:
You’d be hard-pressed to find a dive place as unique and thrilling as New Brunswick. Located on the famous Bay of Fundy, this Maritime province is home to the largest tides in the world and even larger aquatic fauna.

The Island of Grand Manan

Grand Manan is a picturesque and rugged 34 kilometers long by 18 kilometers wide chunk of rock, resting 32 kilometers off the coast of New Brunswick in the mouth of the Bay of Fundy. Considered the largest of the Fundy Isles, this secluded island is tied to the mainland by a year-round ferry service departing from Blacks Harbour, New Brunswick.

Characterized by its rocky headlands, secluded beaches and countless hiking trails, Grand Manan is home to a population of 2,500 people – many of whom are tied to the fishing industry. Around the island many will find active fishing weirs, migrating whales and playful seals in the summer months. 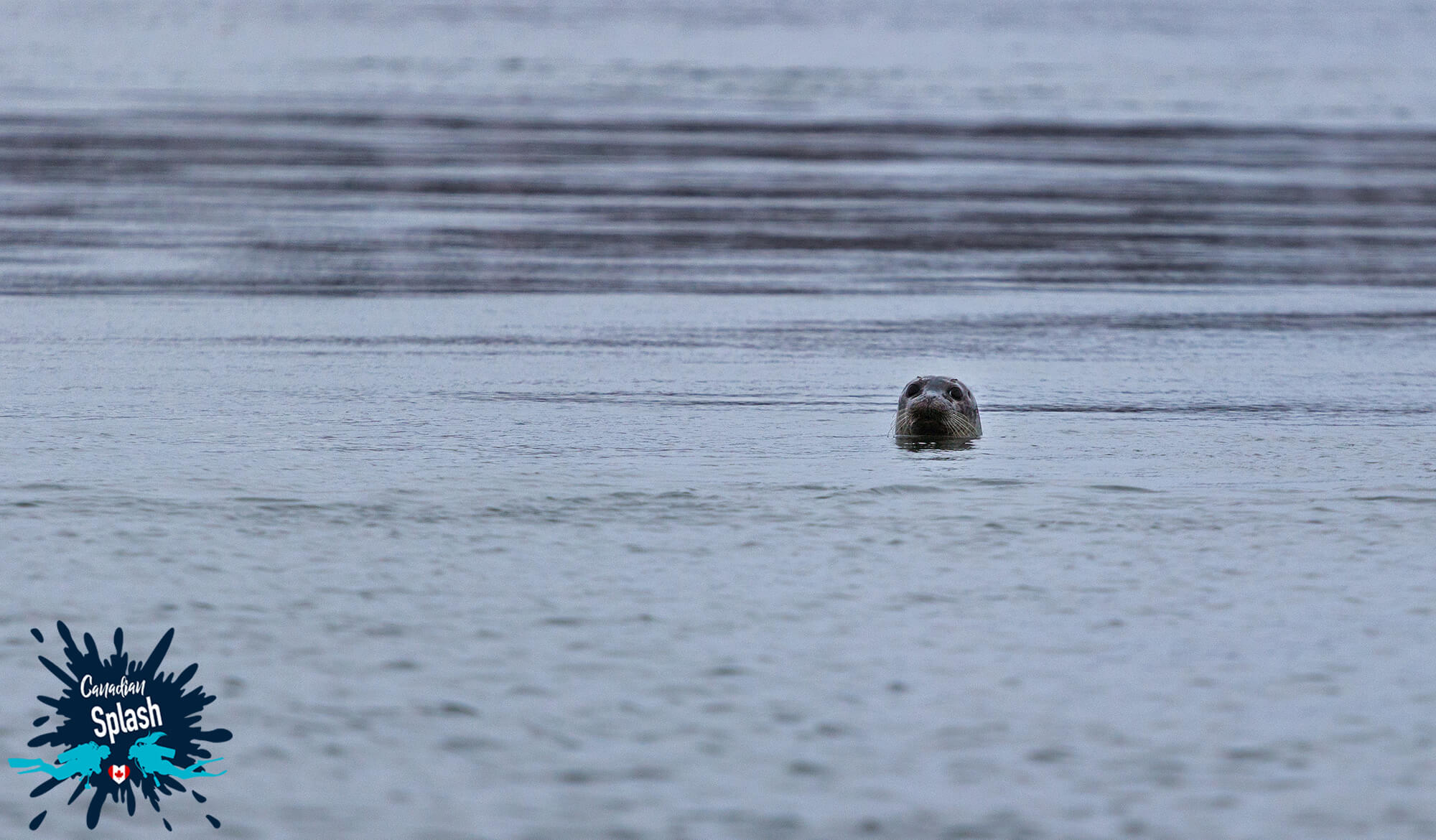 Because Grand Manan is frequently a fog-bound place surrounded by rocky coastlines in the middle of the Bay of Fundy, there are many good reasons that this island would be an ideal candidate for scuba diving. For starters, many ocean-going vessels have met their untimely fate in the waters surrounding this island and now lay in shambles on the seafloor. Beyond the slew of shipwrecks, Grand Manan is also a hot zone for ocean productivity.

Thanks to the constant turmoil and changing tides, the outer Bay of Fundy has some of the most productive waters in Eastern North America. As proof, Grand Manan is well known for its commercial fisheries. That paired with its seasonal summer visitors of seals, whales, puffins, sharks and many other large pelagics, attests to the island’s rich food-chain and incredible wealth beneath the sea.

Thanks to currents and open exposure to the North Atlantic, shore diving on Grand Manan is restricted to two small coves; Pettes and Whale. These low-lying sandy and rocky beaches on the north-east side of the island, provide protection from wind and current enabling shore divers to experience a small slice of the aquatic flora and fauna the Bay of Fundy has to offer. 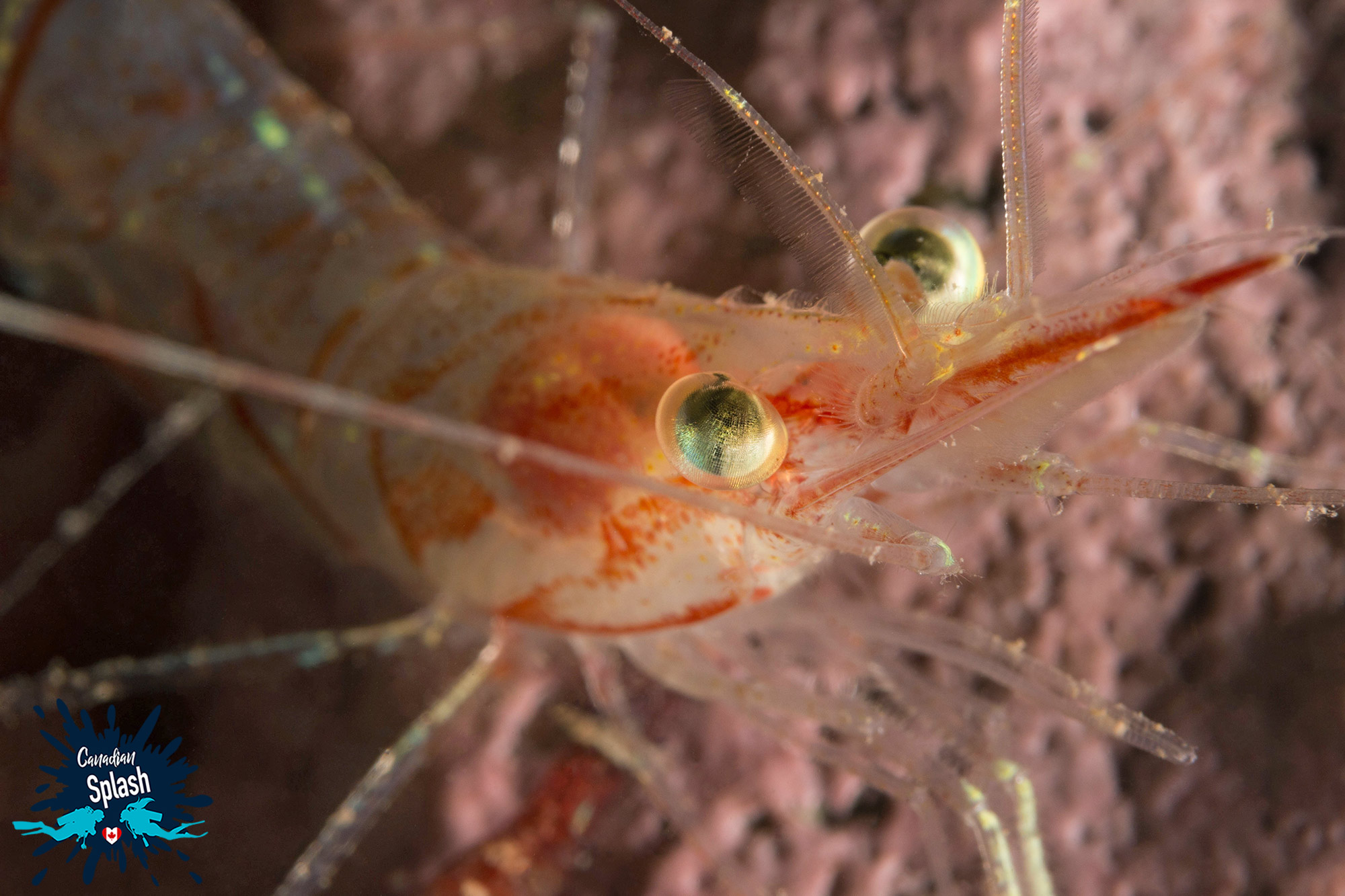 Pettes Cove is a mere stone throw from the Grand Manan ferry terminal at the base of the Swallowtail Lighthouse. This photogenic cove and shore driving location is a spot with beautiful sunrises, a cozy beach and fishing weirs named the “Cora Belle” and “Intruder.” 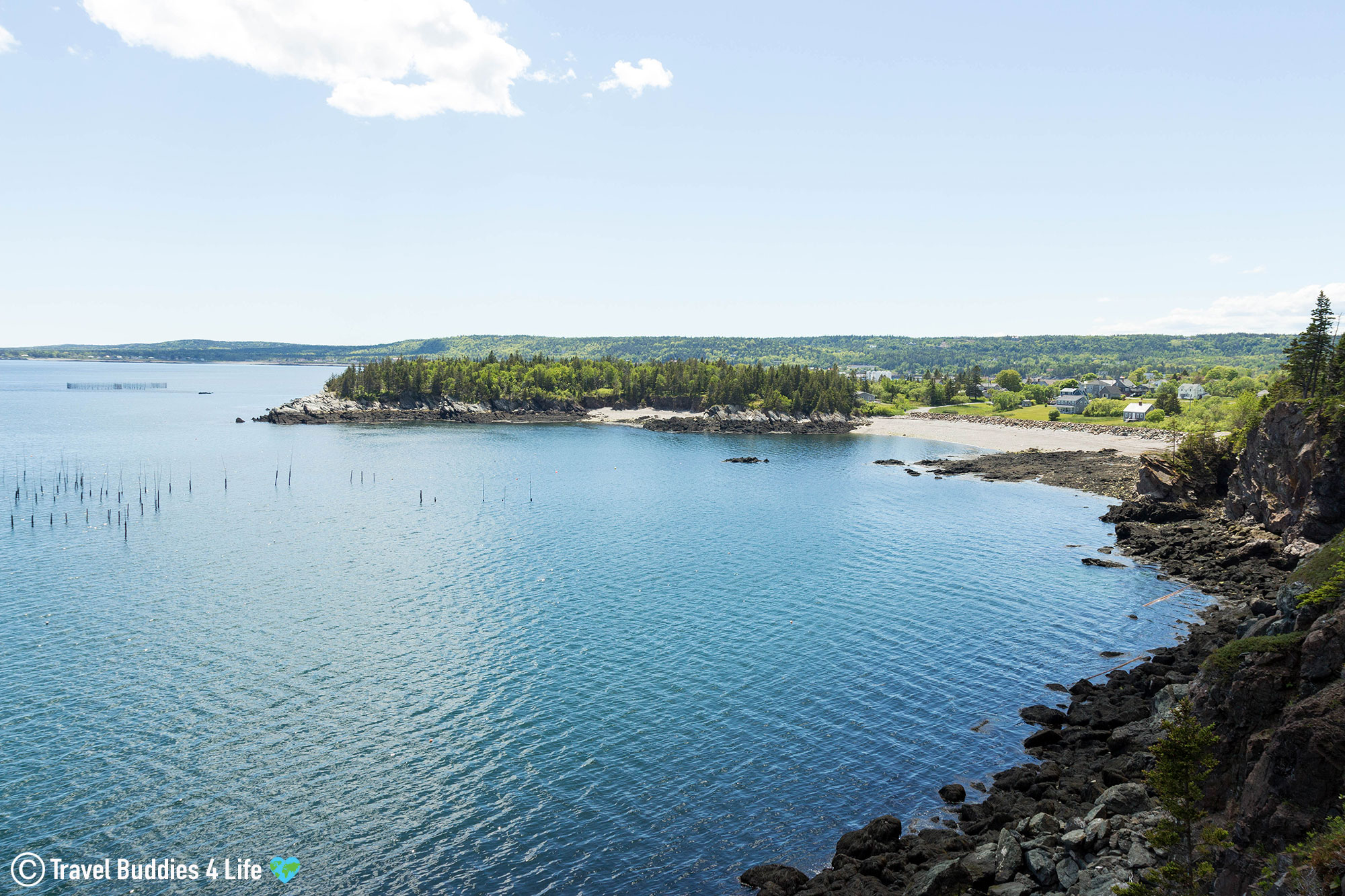 After parking along the road, we geared up and took to the coves shallow water. We timed our dive around the high tide mark, meaning that weighted down in heavy scuba equipment we would have a short walk into waist-deep water. It was moderately wind on the day we decided to dive and.

Once underwater I noticed that visibility was not the greatest along the sandy bottom which was probably due to the brisk wind that had been blowing since the morning. Moving towards the outer proximity where visibility seemed to be better, Joey and I began exploring rocky ledges on the right side. We saw lots of crabs, snails and barnacles but sadly that was the extent of our animal findings at this site. 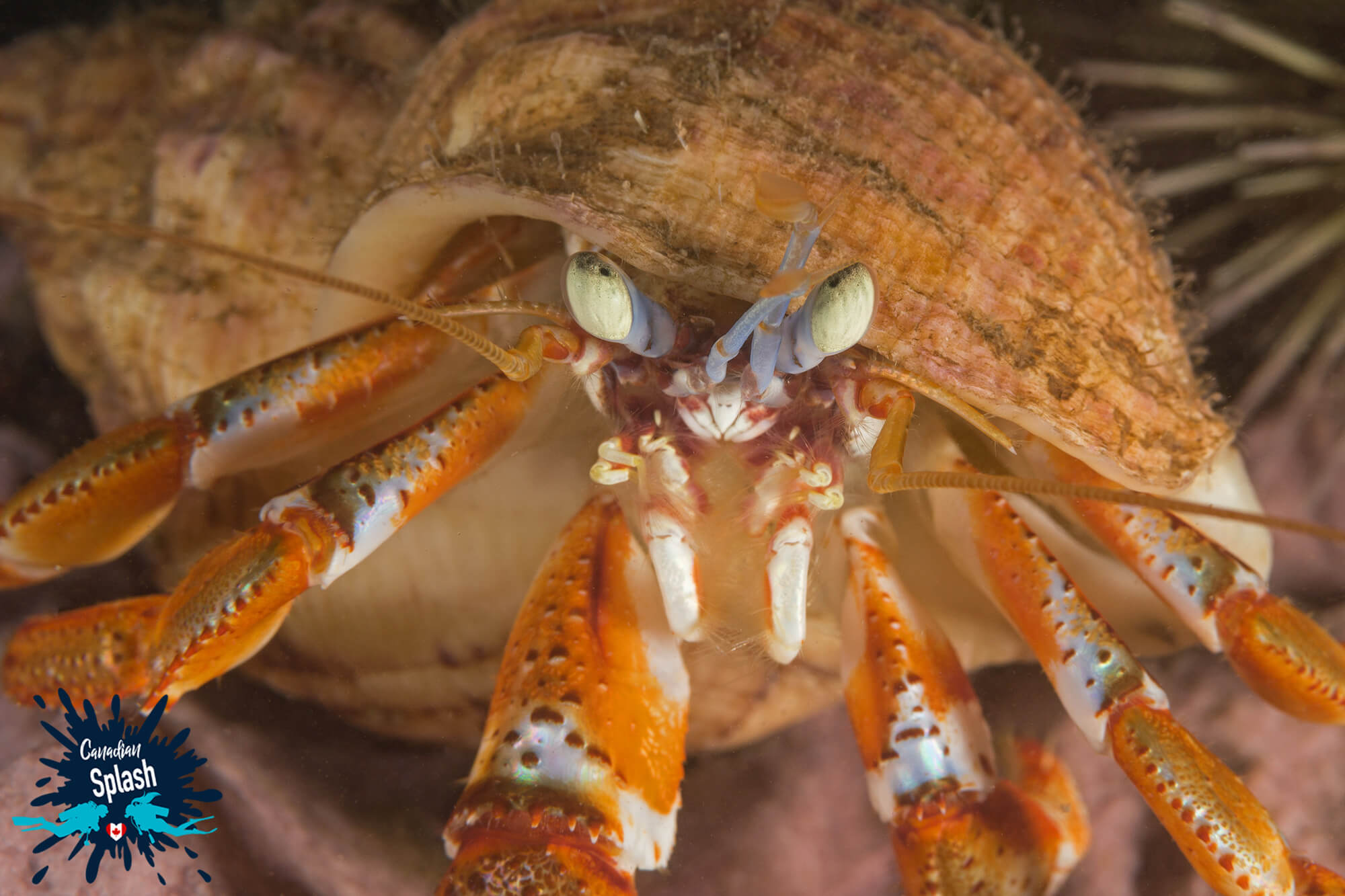 In addition to our invertebrate finds, I also noticed so many kelp pieces floating loosely along the bottom. The green plants seemed to hover just above the sand line giving the illusion of being on the bottom. It was a first for me, but watching the kelp ebbing back and forth over the stationary ground made me feel a tad seasick. 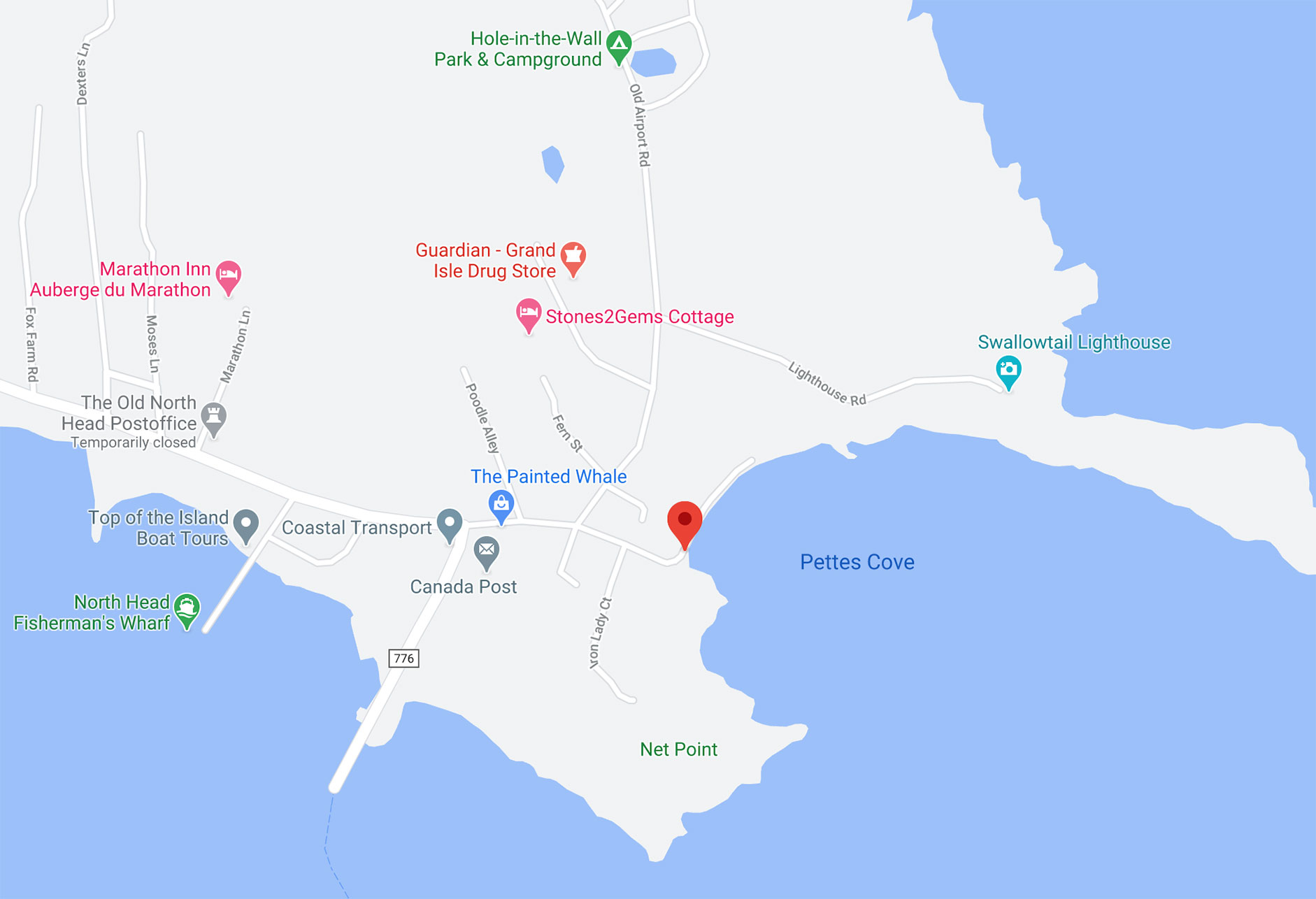 How to Find Pettes Cove and What to Look For
GPS Coordinates: 44.763288, -66.741796
Address: 40 Pettes Cove Rd, Grand Manan, NB
Park along the road but don’t block traffic. Diving is done on the left side of the cove. Bring a dive buoy (especially in the summer) because of boat traffic. 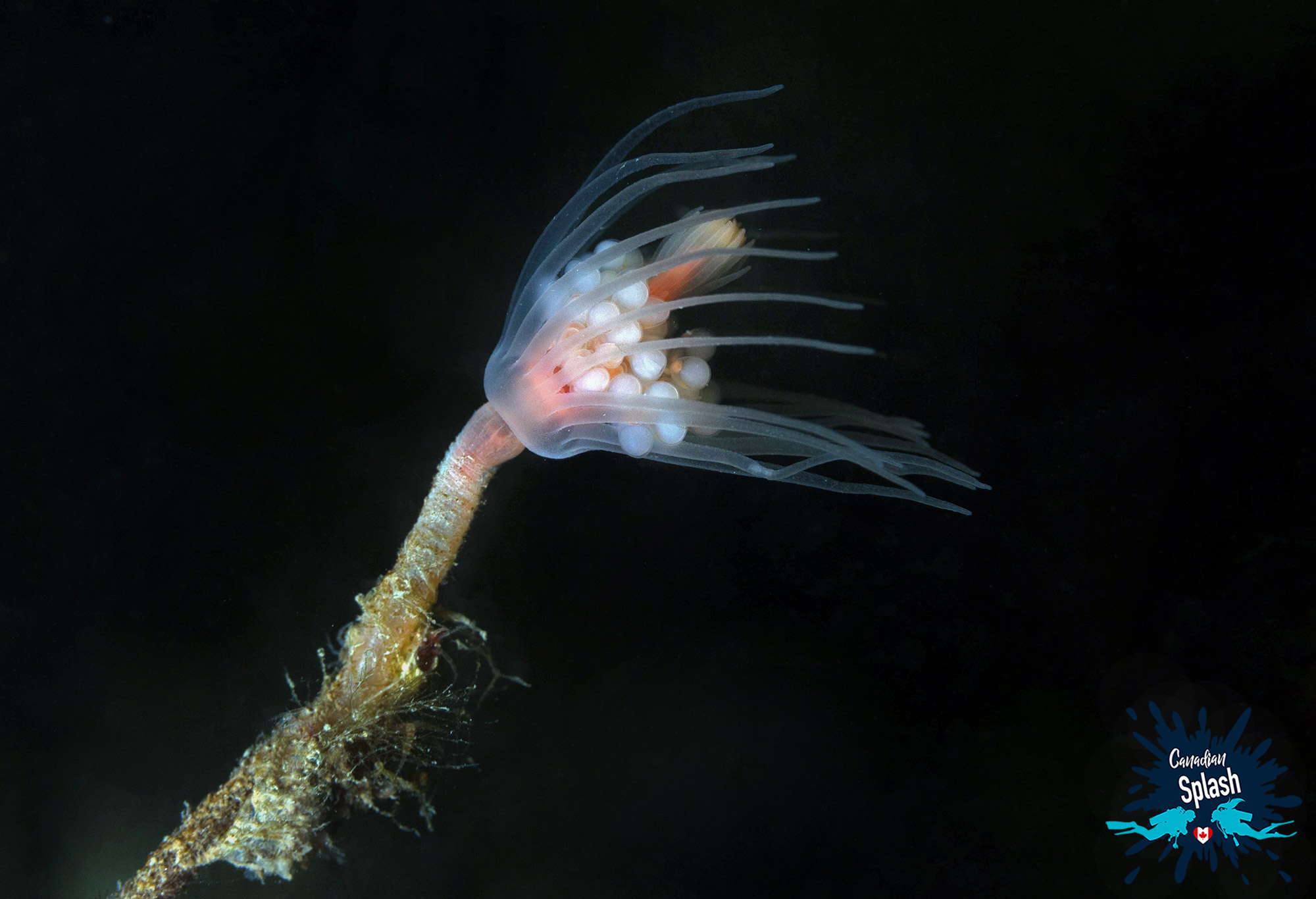 Whale Cove is a beach, dive site and salt marsh all wrapped into one. This region was once a fishing wharf destroyed in the Groundhog gale of 1976. Compared to Pettes Cove, Whale is slightly more exposed to Fundy and a single storm can dramatically change the beach. The cove has two main access points via Whale Cove Rd and Cemetery Lane (a gravel road).

Parking at the end of Cemetery Lane we entered the water on the right side of the cove along the cliffs. Compared to Pettes cove this spot was slightly more choppy and there were also some fishing weirs a short distance out. Regulators clenched between our teeth we submerged into the chest deep water following the contours of the shoreline looking for critters. 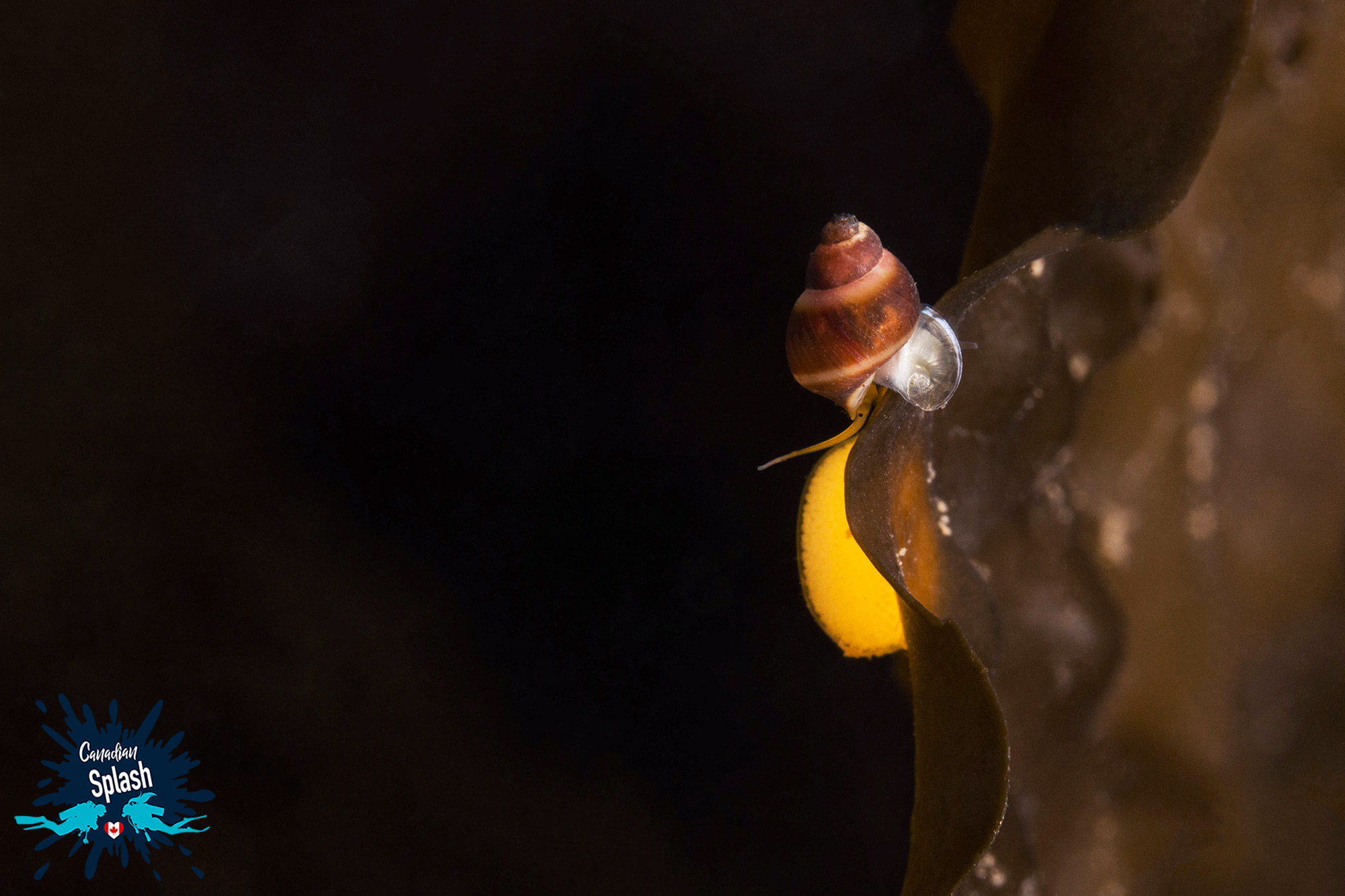 Similar to Pettes cove and many other Fundy diving sites, visibility wasn’t the greatest but we did take the opportunity to hunt out hermit crabs, sea stars and other bottom dwelling inverts. There was an abundance of skeleton shrimp clinging to a variety of surfaces and fragments of kelp pushed into the bay via the wind and wave action. All in all it was a low key dive with limited animal sightings. 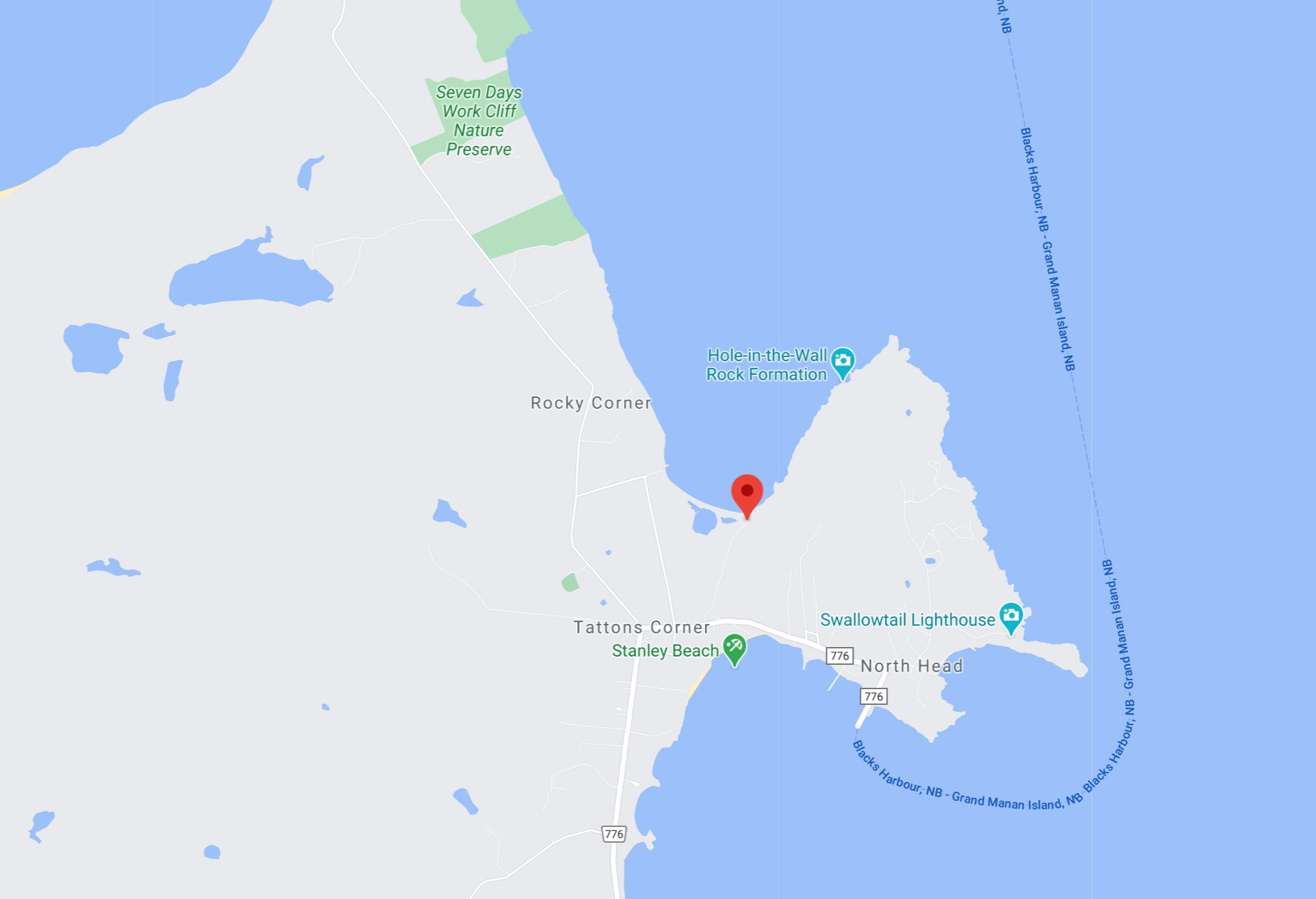 How to Find Whale Cove and What to Look For
GPS Coordinates: 44.770892, -66.755172
Address: 24-40 Cemetery Ln, Grand Manan, NB E5G 4A4
Dirt/gravel road and a small amount of hiking needed to reach the dive site. Park along the dirt road but don’t block traffic. Bring a dive buoy (especially in the summer) because of boat traffic. 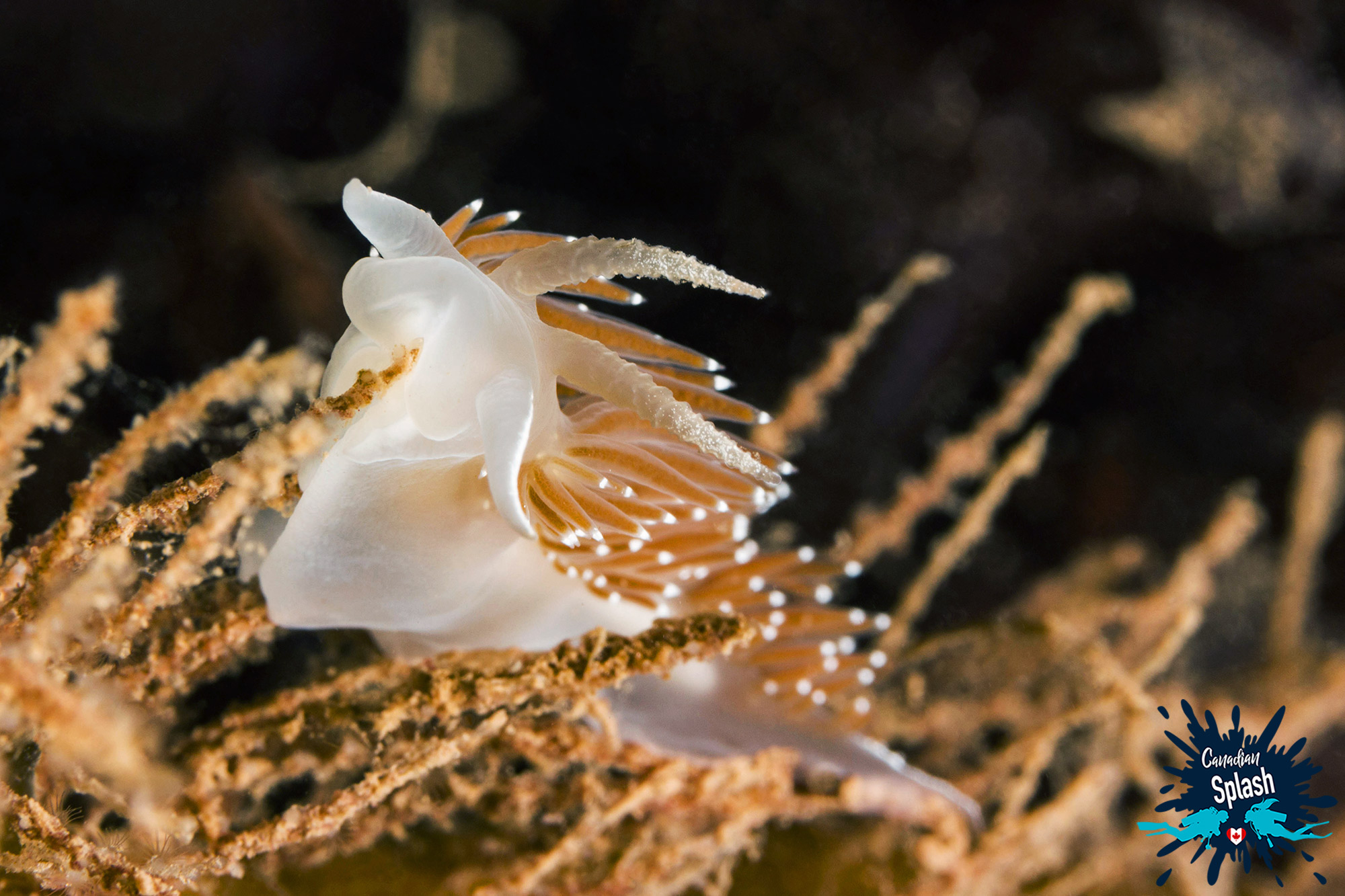 The western side of Grand Manan boasts towering cliffs and a dramatic landscape. The water is challenging if not impossible at places to access from shore. Yet, despite its limited accessibility, this side of the island is also the gateway to some of the best diving Grand Manan has to offer.

On the first of three dives from the RIB, I was shocked by what filled my sight. On this side of Grand Manan, the visibility was much better than our shore dives, likely due to the chunky rock profile. On top of the rocks were hundreds if not thousands of swaying kelp. The kelp was a rich green and anchored to the substrate by their holdfasts. I watched as these plants bounced rhythmically in the surge. 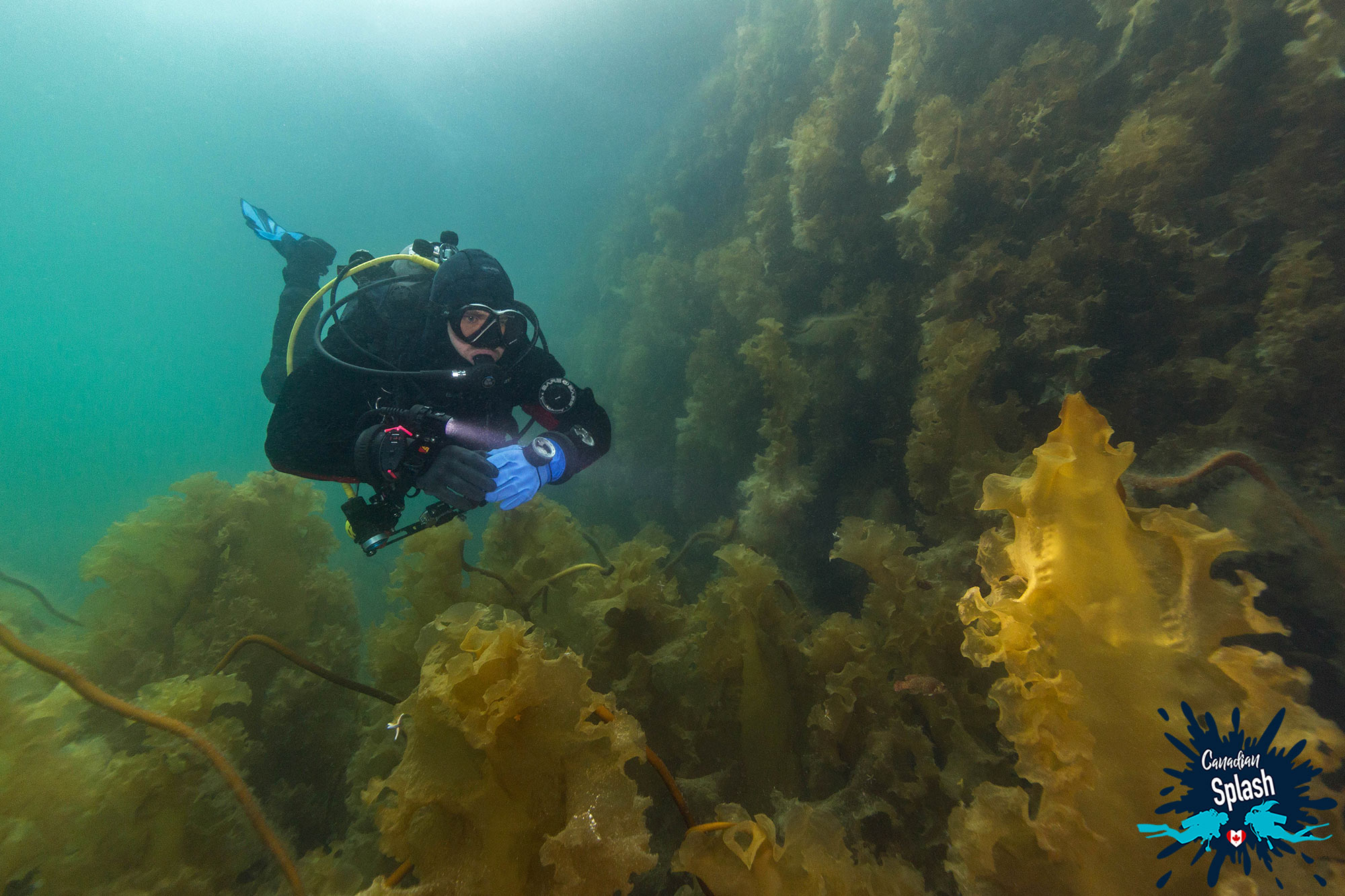 Taking my time and getting used to this incredible environment Joey and I navigated through this underwater forest feeling like we’d landed in the jungle. It was a surreal environment that I had never dove in before. As we progressed through the umbrellas of kelp I trained my eyes on the rock faces. Surely a place as bountiful as this would be home to some interesting finds. I found nudibranchs, snails, crabs, skeleton shrimp, and even a couple of spiny lumpsuckers. 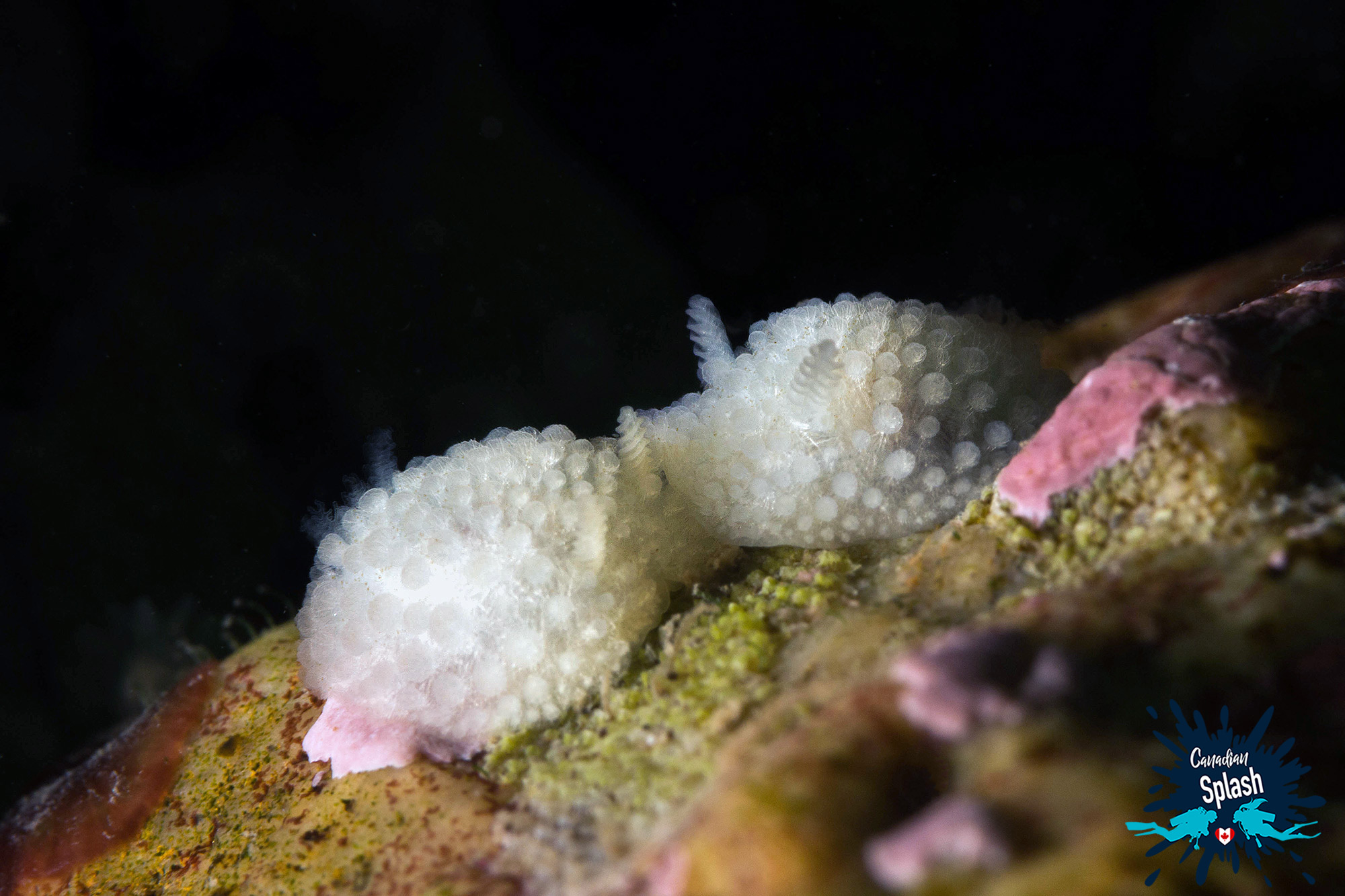 Our second dive unraveled in a similar manner as the first, only it was in a more sheltered location with less pull from the outgoing tide. On both dives, I had really hoped to find a wolf eel or two hidden in the kelp, but try as I might, these reclusive creatures did not make an appearance. What I didn’t know at the time but found out later on our way back to shore was that there was a playful seal lurking around our diving location. The captain was watching it circle and frolic in our exhaled bubbles.

We ended our Grand Manan underwater adventures with a treat, getting the opportunity to dive in the captain’s family fishing weir “Iron Lady”. Having only seen fishing weirs from shore at a distance I couldn’t believe how large these fishing weirs actually were. The captain puttered the boat right into its midsection where we backrolled off the boat into the blue-green water. Finning to the side of the weir, we followed the netting down until we could see the bottom and began scanning its extremities. Baitfish, jellies crabs – there was lots to be seen in this interesting place. 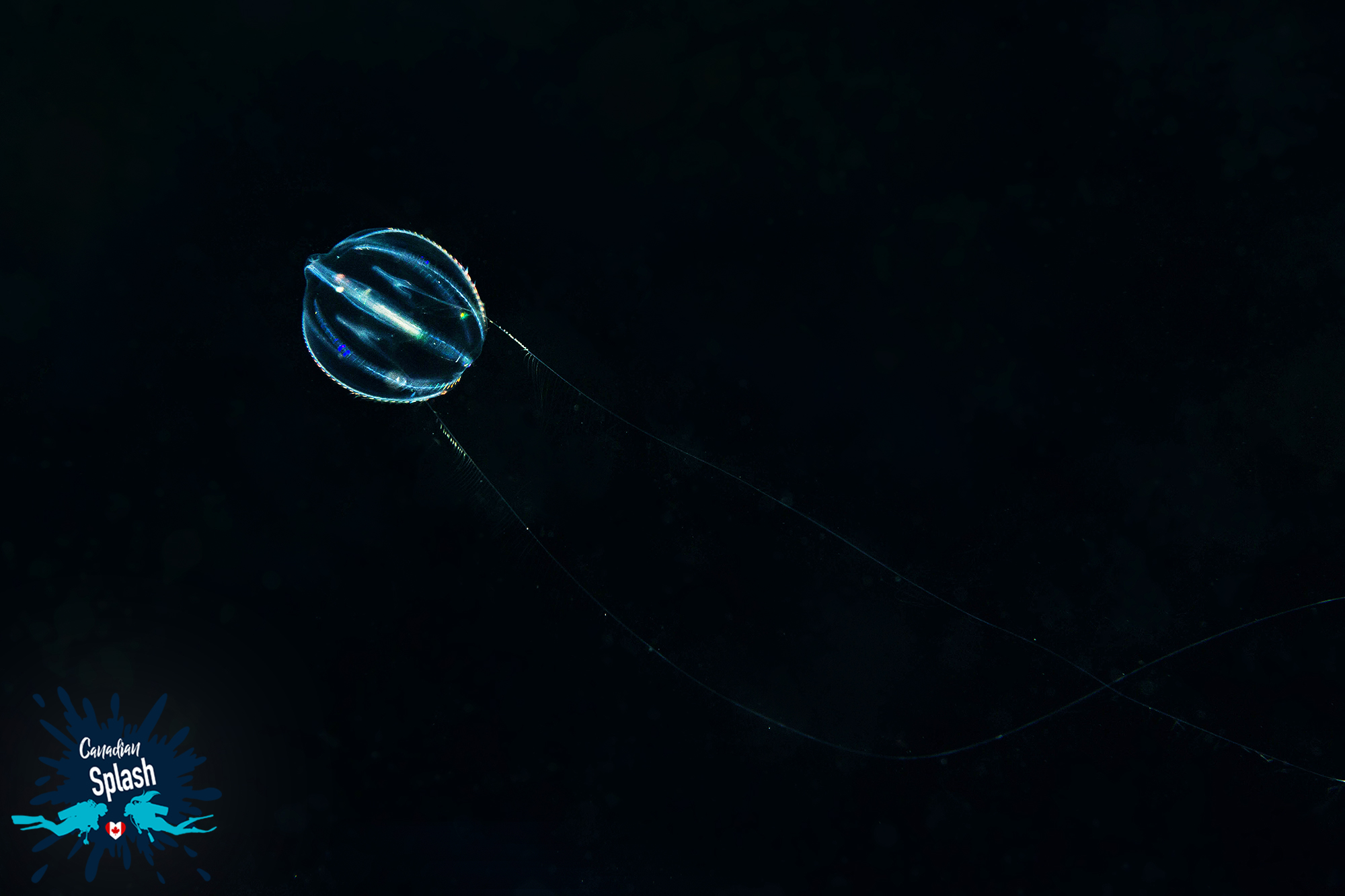 The Low Down on Grand Manan

Prior to this dive trip, I had only visited Grand Manan island once before as a land-based tourist. Given the limited amount of information I could find and the lack of a dive shop on the island, I didn’t have very much to go on and figured I’d play it by ear. Fortunately one of our diving contacts in New Brunswick was able to connect us to a local fisherman and diver owning his own compressor and RIB boat. And so the adventure began…

We visited Grand Manan in early June – unfortunately just shy of the arrival of migrating whales. In terms of diving, while I love a good shore dive as much as the next scuba diver, boat diving on Grand Manan is where we feel it’s at. Both shore diving spots were good for a shakeout dive, however, we found the marine life to be somewhat sparse. Having the ability to travel to the west side of the island offered better underwater topography, beautiful kelp beds that made me feel like I was swimming through a jungle and more richness in the diversity of fauna. 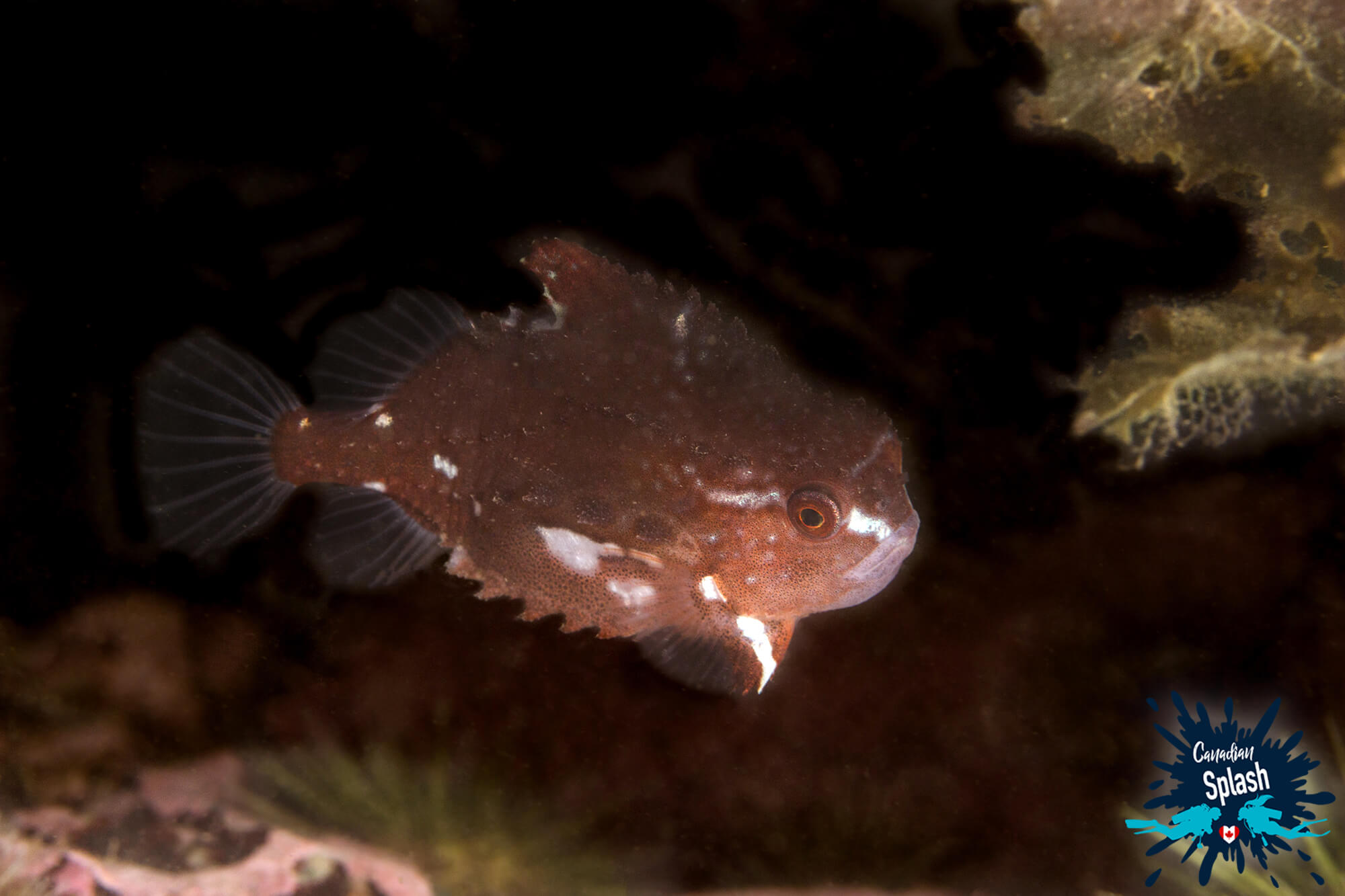 Have you ever been diving in Atlantic Canada and found a site with some great kelp beds? How would you handle bouncing in this plant life looking for creatures? 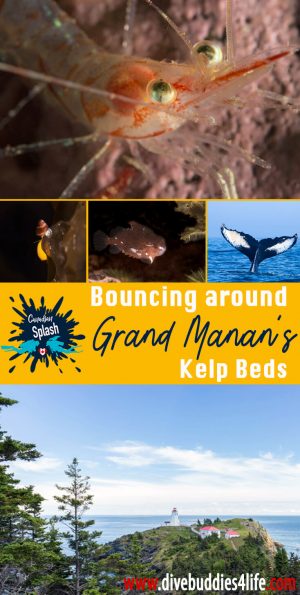