Nicaragua: Dive into the Laguna Apoyo

Diving the Lake of a Volcanic Crater

Joey and I had been in Nicaragua for less than a week before we were joined by Galen, an old friend who happened to be traveling the same country. It had been five years since we’d worked together at the Canadian Ecology Center but as fate would have it, Galen arrived in Nicaragua shortly after we did. Having an extra room in our Airbnb, Galen bunked up with us for a few days while he explored Granada.

On Galen’s last day in the Granada area, we decided to visit a volcanic lake.

The Apoyo Laguna is a freshwater lake occupying the pit of a resting volcano.

This landmark is located between the cities of Masaya and Granada. Its crater was formed over 23, 000 years ago and measures approximately 6.6 kilometers in diameter and 175 meters deep.

Laguna Apoyo considered an endorheic Lake, meaning that there is limited drainage in the basin. Most of the influx and outflow of water comes from underground and plays a major role in the lake’s water balance.

Since 1991, the lake and its surrounding area have been deemed a nature reserve housing a tropical dry forest ecosystem. Over 500 species of plants grow and encircle the crater, and a variety of fish species, including six endemic species of cichlids can be found inside the lake.

Not only is the Laguna a natural reserve for plants and animals, but this unique location also offers die hard scuba fans the chance to dive in the crater of a volcano. 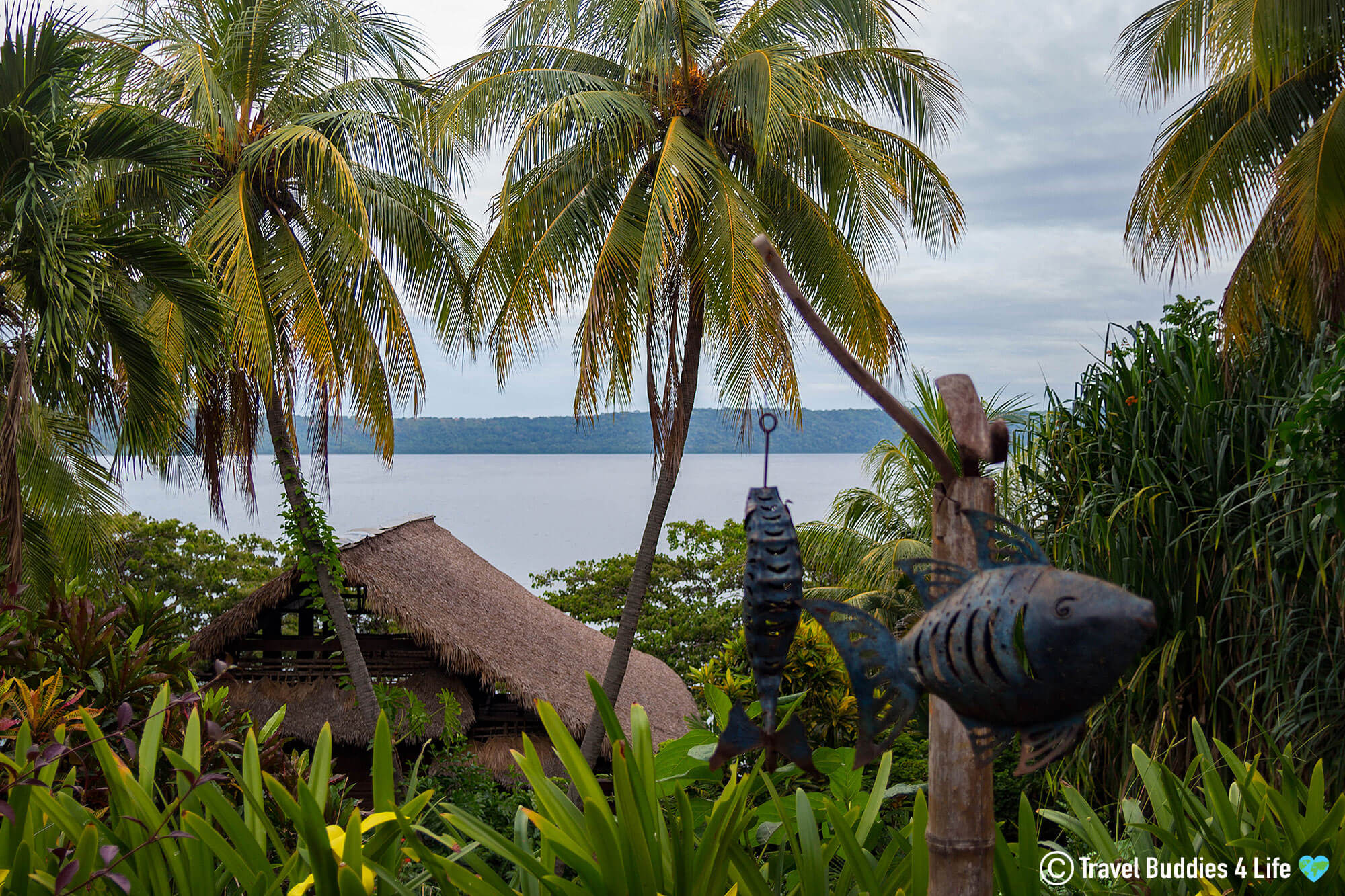 Diving into the Laguna

Dive day was a whirlwind of activity. That morning Joey and I assembled our dive equipment while Galen packed his belongings. We would be making our way to the Apoyo Laguna for the day, and part ways with Galen, who would be backpacking all the way to Honduras.

Our destination was located about 20 minutes outside of Granada and after a shuttle bus mix up, we began hunting for a taxi that would drive us to Apoyo for a reasonable price.

We ended up finding a sketchy taxi that had no seat belts, no speedometer, a ripped out radio and cracks in the windshield. The driver barely spoke a word of English and Galen did his best charade gestures occasionally throwing out one or two words in Spanish to communicate our end destination. At one point I thought we were going to have our organs cut out and sold on the black market. You can imagine our relief when we got there in one piece. 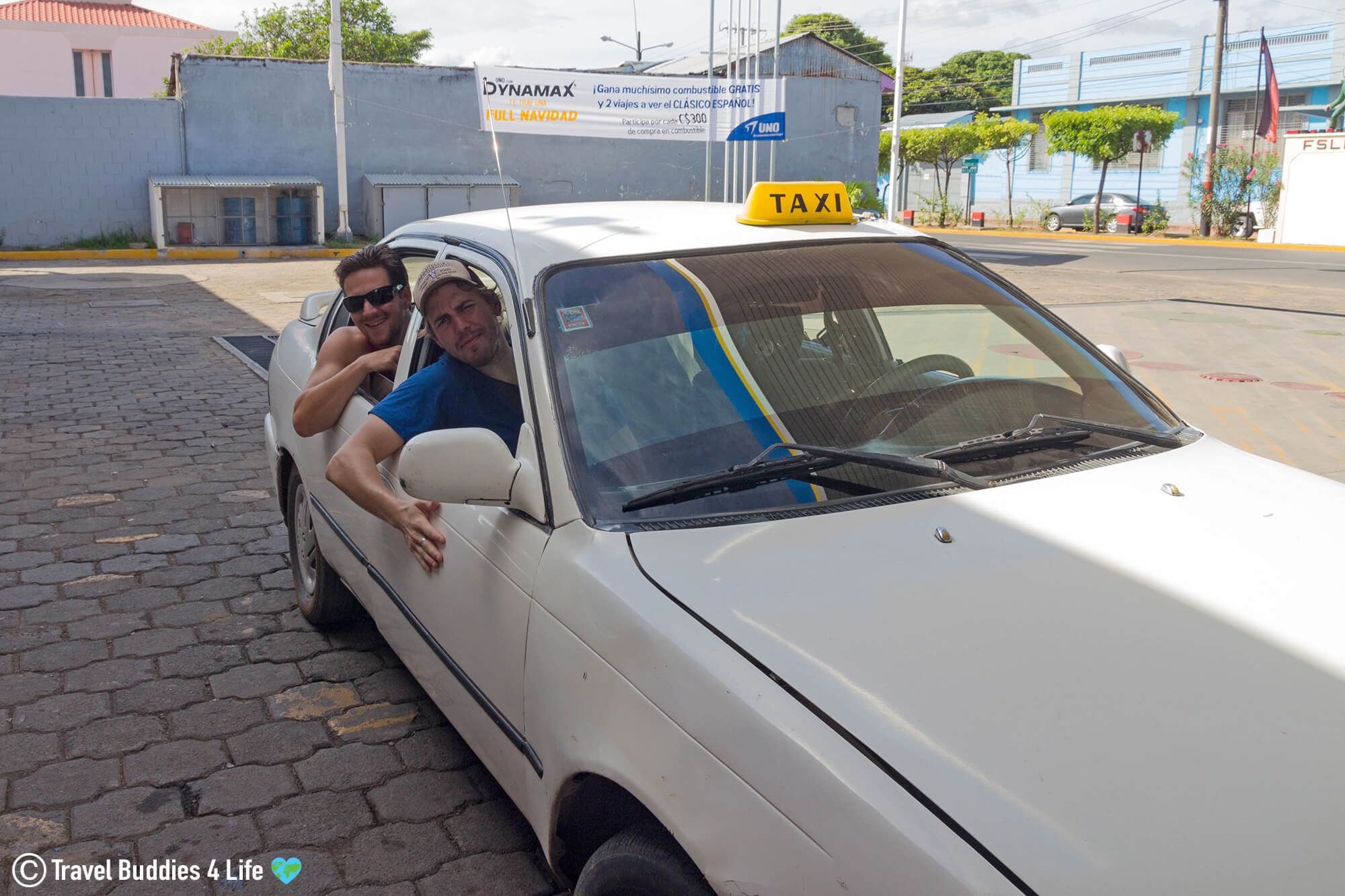 Our dive outfitter was located a hop, skip and jump from the Monkey Hut, Galen’s hostel for the night. The scuba shop couldn’t take us out diving until the afternoon so Galen checked in and they graciously allowed us to hang out at their beach. A restaurant, hammocks, kayaks, a floating dock… The Monkey Hut was well equipped for a day of fun in the sun. We stored our bags with the staff at the front desk and changed into our bathing suits. While relaxing on some of the hammocks we gazed out at the blue lake and crater slope covered in a leafy forest.

The entire morning and afternoon we floated around carelessly in the warm waters of the lagoon stopping only for a pizza filled lunch break at the restaurant. It was a good thing that we had planned to spend the entire day at the Laguna Apoyo enjoying the beach, by the time the dive master was ready to take us out diving it was getting close to sunset. 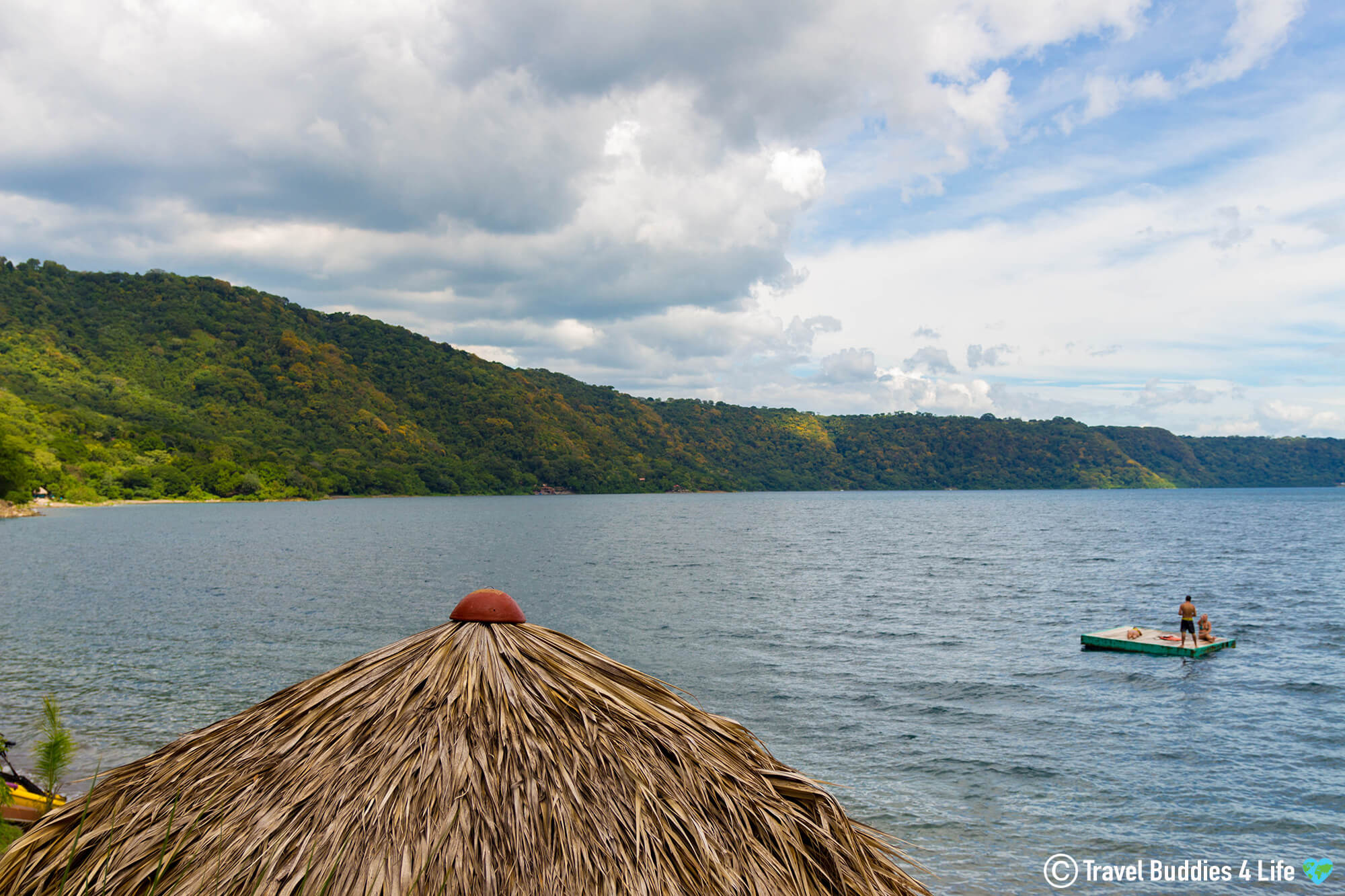 The dive started on a sandy slope at the north-west side of the lagoon.

It was a short surface swim to the spot we would descend below the waterline. Joey, Galen, the divemaster and I inflated out BCD’s, flipped over on our back and kicked our way to the start point. When the divemaster gave the okay signal we donned our regulators and submerged into the watery crater of the Laguna Apoyo. 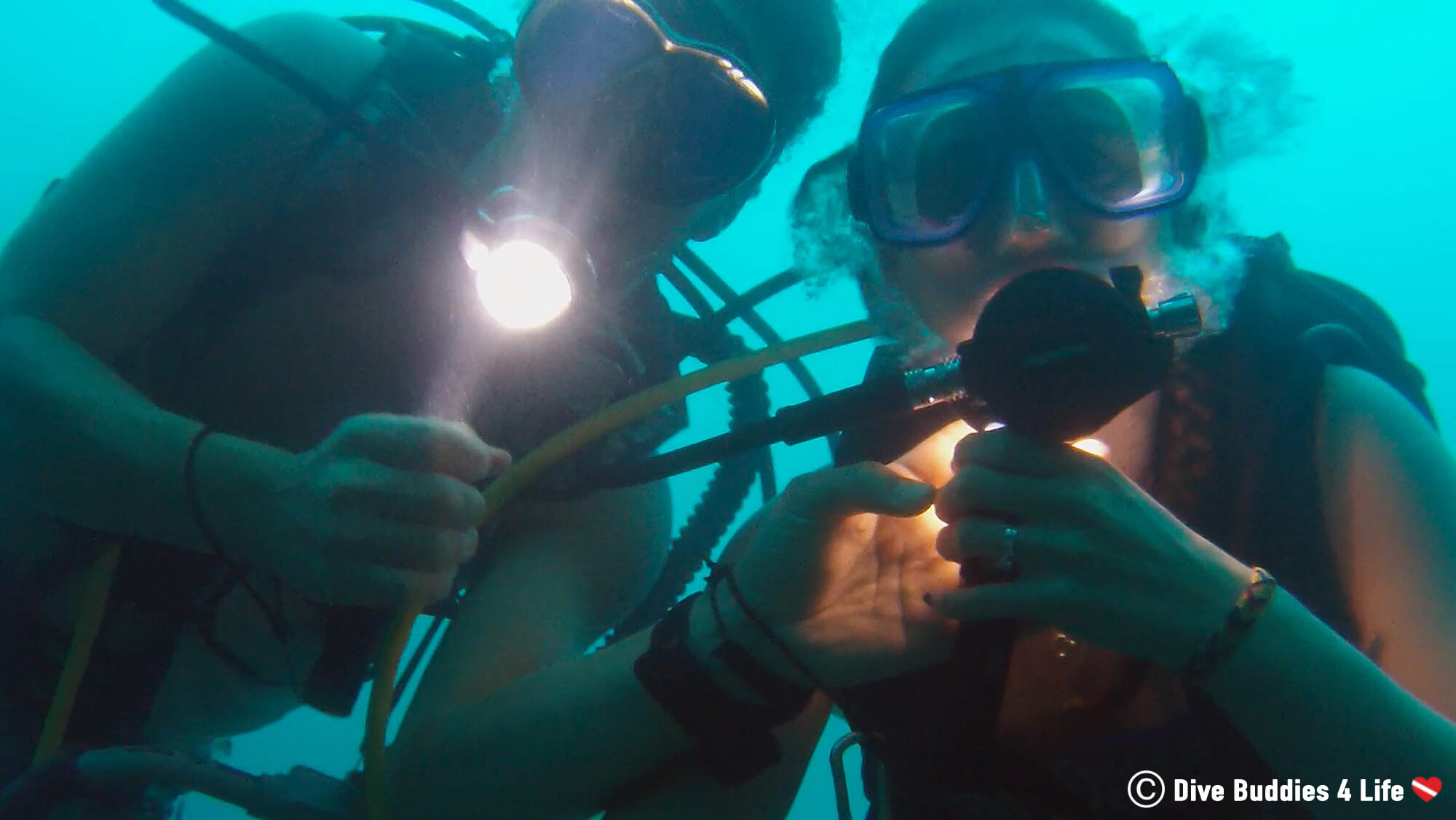 The first thing I noticed as I sunk beneath the watery surface was how peaceful the water was. Free of boats and sheltered from strong winds creating wave action, it was quite unlike anything I had ever dived in before. Utter silence enveloped us.

The group slowly descended several feet, until we caught sight of the mud-covered bottom. Before we could stir up its contents, we leveled off hovering several feet from this muddy plain. 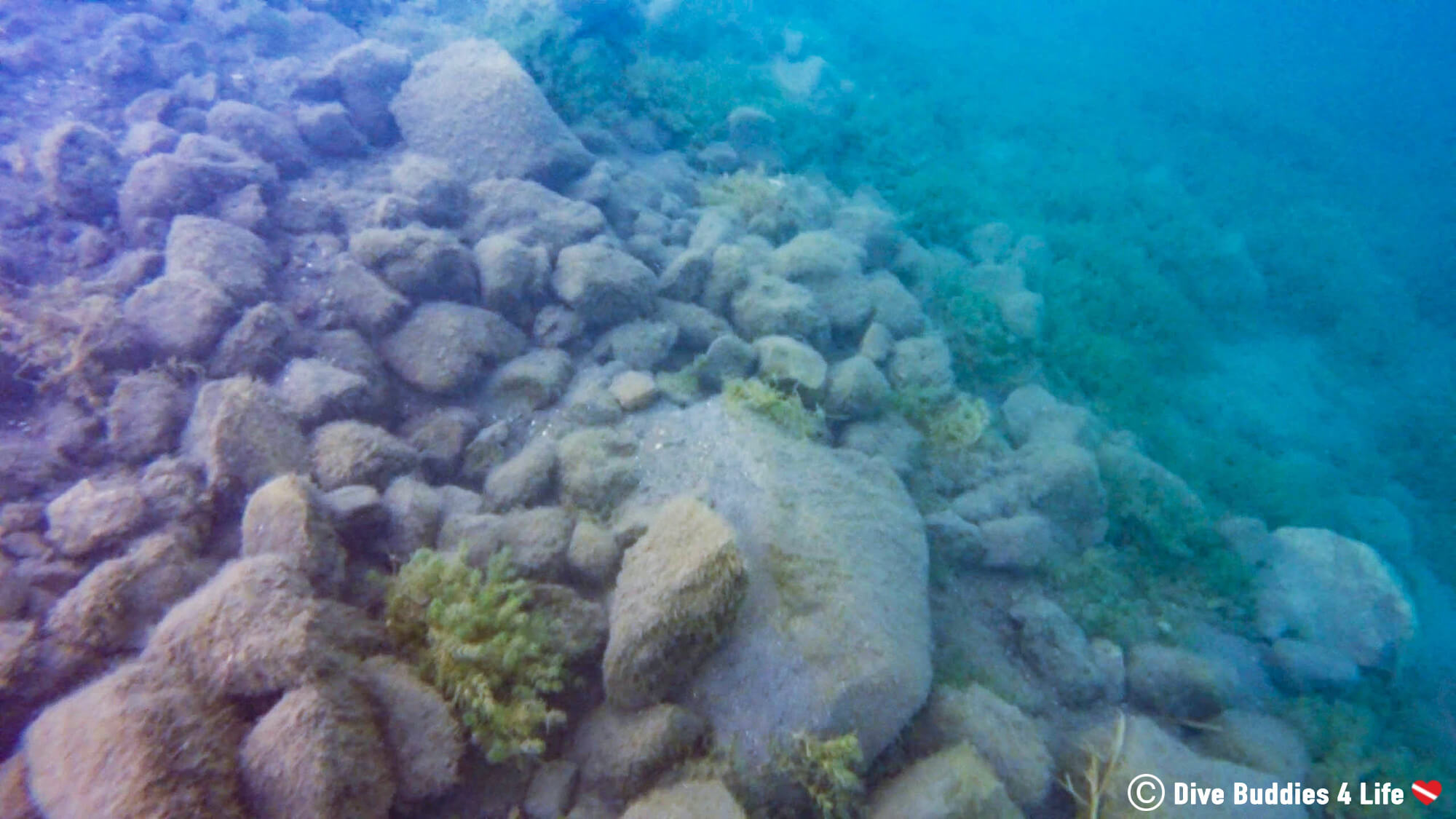 In these initial moments, Galen had a little trouble clearing his ears. It can be such a pain in the butt when that happens! Trying to equalize, he fussed around in the shallows for a bit, but it wasn’t long before the problem was resolved and three of us were at 18 meters (60 feet) tailing the divemaster like little ducklings. 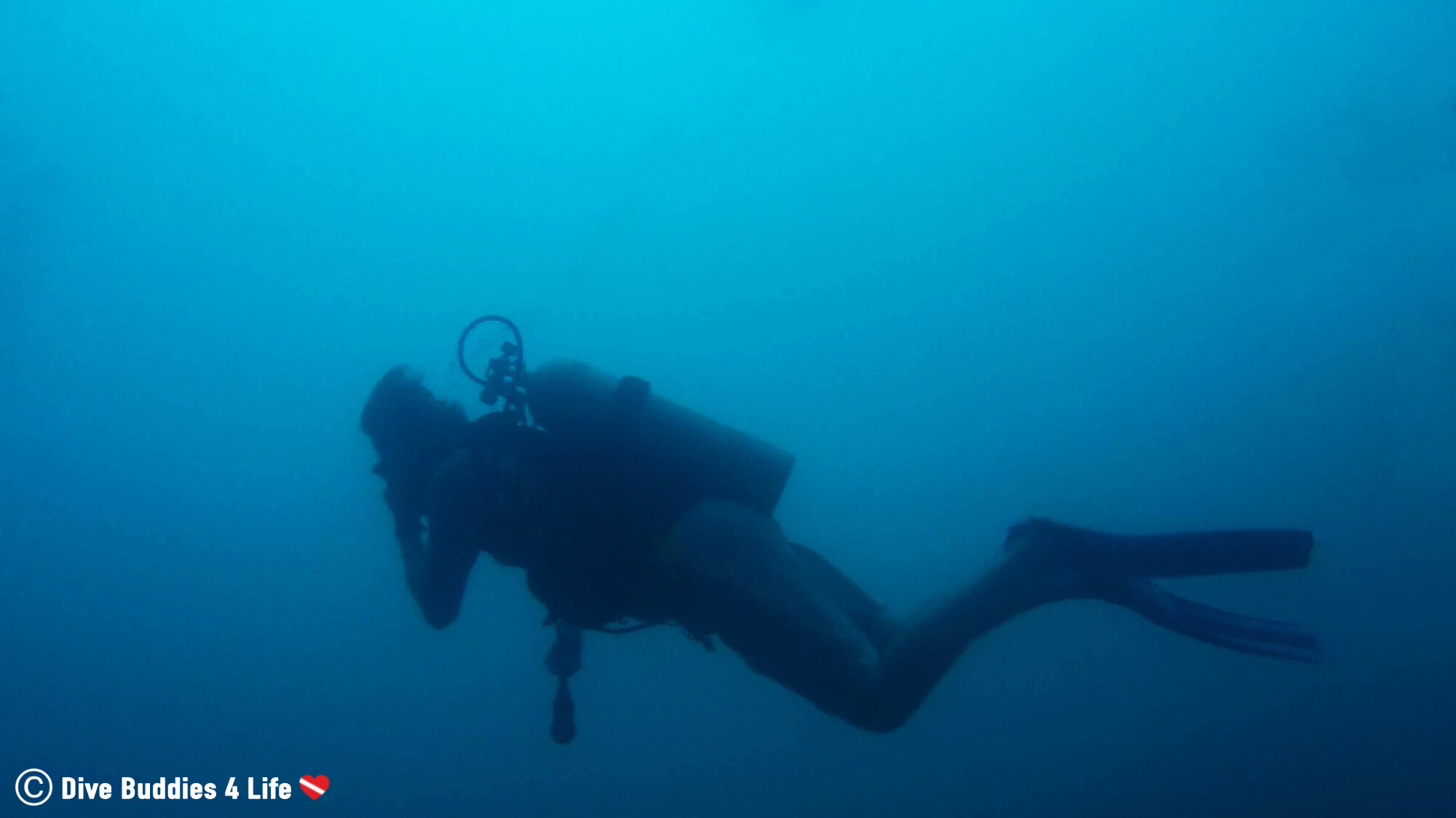 Cichlids big and small could be seen by the dozens near rock formations and along the silty bottom. In some of the more rocky and sheltered areas, we spied a school of little babies no bigger than a grain of uncooked rice. As we panned the flashlight on the babies they scattered in a hurried panic. Glints of silver scattered every which way.

The wide variety of cichlids fish was not the only thing we saw, the divemaster even found a pretty big freshwater crab. We do not encourage handling marine animals, however, the divemaster carefully collected the crab in his hand to show us. Its long stringy legs reminded me of a creepy crawly spider. 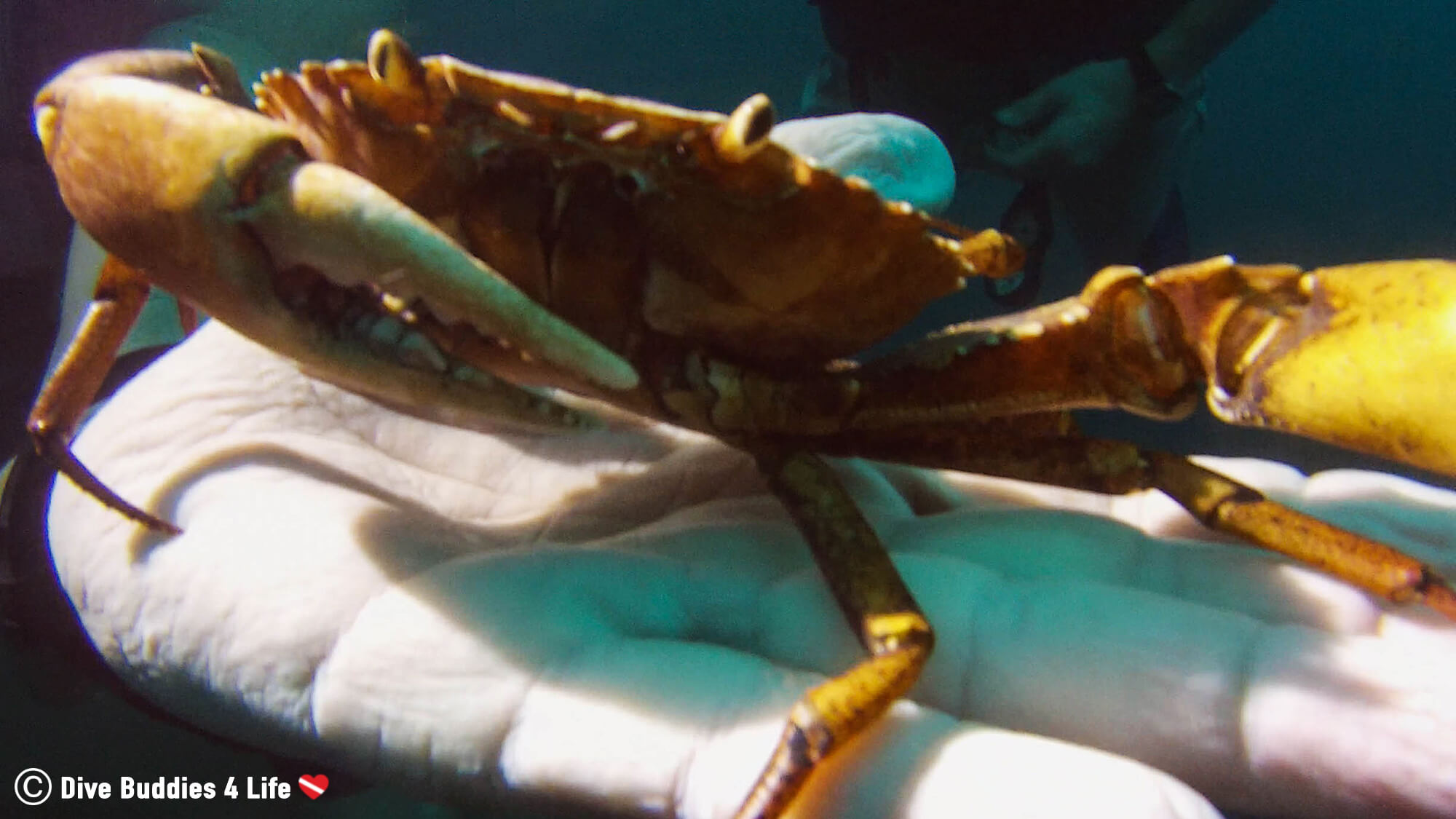 I marveled in the wonderful 27-28°C bathtub-like temperatures of the water, even as deep as 24 meters (80 feet).

No wetsuit and no thermocline. It was strange yet surreal! As we finned through the uncannily quiet waters of the crater we kept on the lookout for small vents of hot water spouting out into the lake. Sadly there were none to be found.

As our tank air dwindled down, we ended our dive with the recommended safety stop and surfaced just as dusk was setting in. 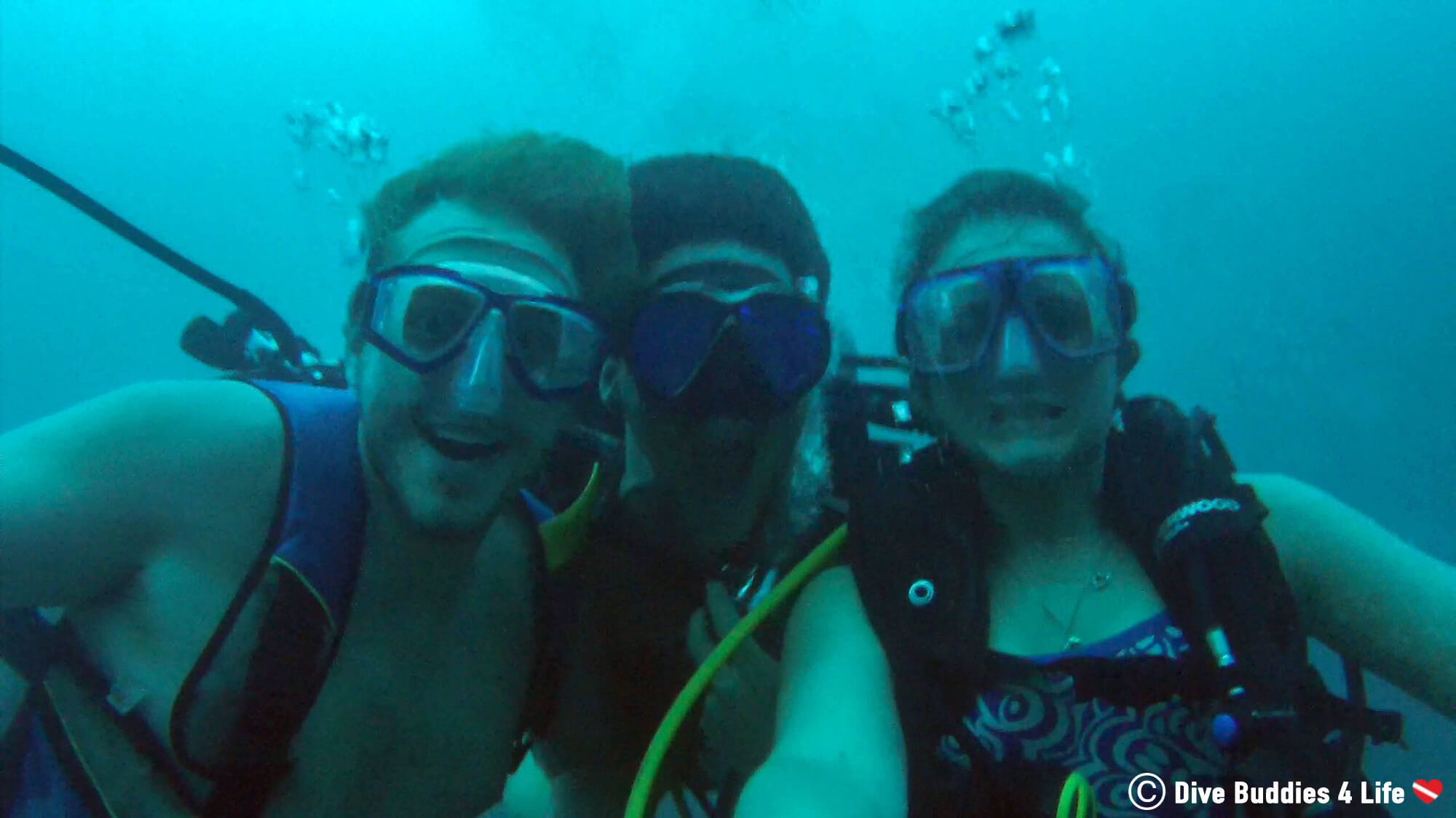 The Apoyo Laguna is a remarkable volcanic crater turned lake in the heart of Nicaragua. While it’s positively stunning from the outside, don’t expect to see very much beneath the surface. 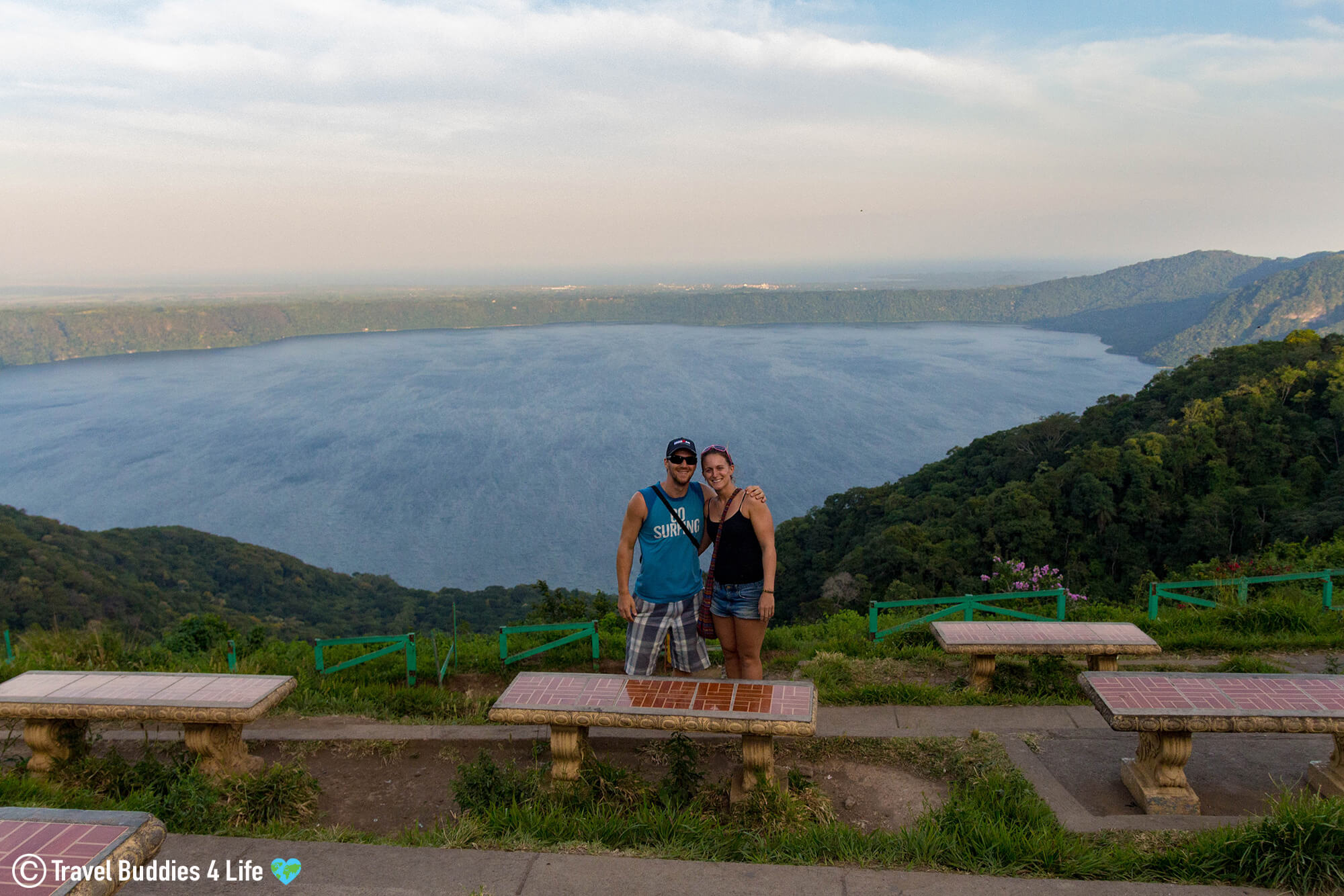 I’m a big animal person but generally speaking, this diving location isn’t a site recognized for its wildlife. This became clear to us in the first five minutes of our dive.

What was neat to experience was the volcanic geology and the ridiculously lukewarm temperatures, especially as we descended deeper into the crater lake.

Apoyo Laguna is first and foremost site of swimming and relaxation, just outside of Granada. However, should you get the urge to go scuba diving in the Laguna, don’t do it for the visibility or animal life. Do it for the sheer adrenaline rush of sinking into the crater of a sleeping volcano.

Would you or have you ever gone diving in a volcanic crater? If so when and where did you dip below the surface? 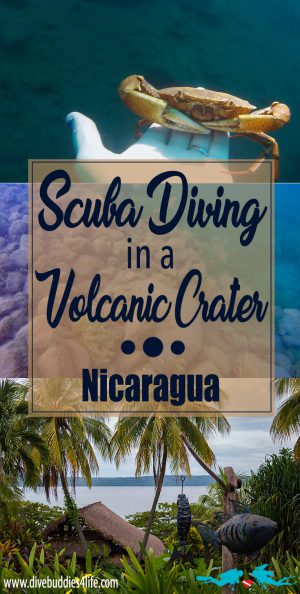