Don’t be Jelly of the Jellyfish

Imagine having no blood, no heart, and no brain yet somehow managing to survive and evolve over five hundred million years. Humans wouldn’t be able to function without ONE of those vital organs, let alone surviving without having ALL of them. 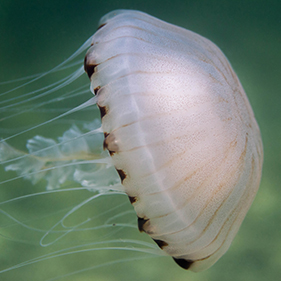 Average Size Relative to a Diver: 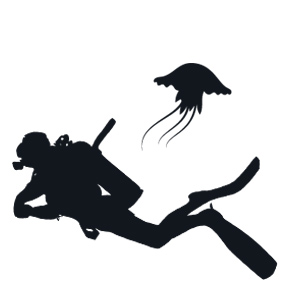 Jellyfish have existed since before dinosaurs walked the earth. As the name implies, jellyfish literally look and feel like jelly. These simplistic invertebrates are composed of up to 95% water and often have a transparent or translucent body.

Jellyfish are part of the phylum Cnidaria, which encompasses over 10,000 species of animals exclusively found in aquatic environments. The most recognized trait animals in the Cnidarian phylum have is their ability to sting through specialized cells. A few other Cnidarian cousins to the jellyfish are animals like; anemones, hydroids, and corals. 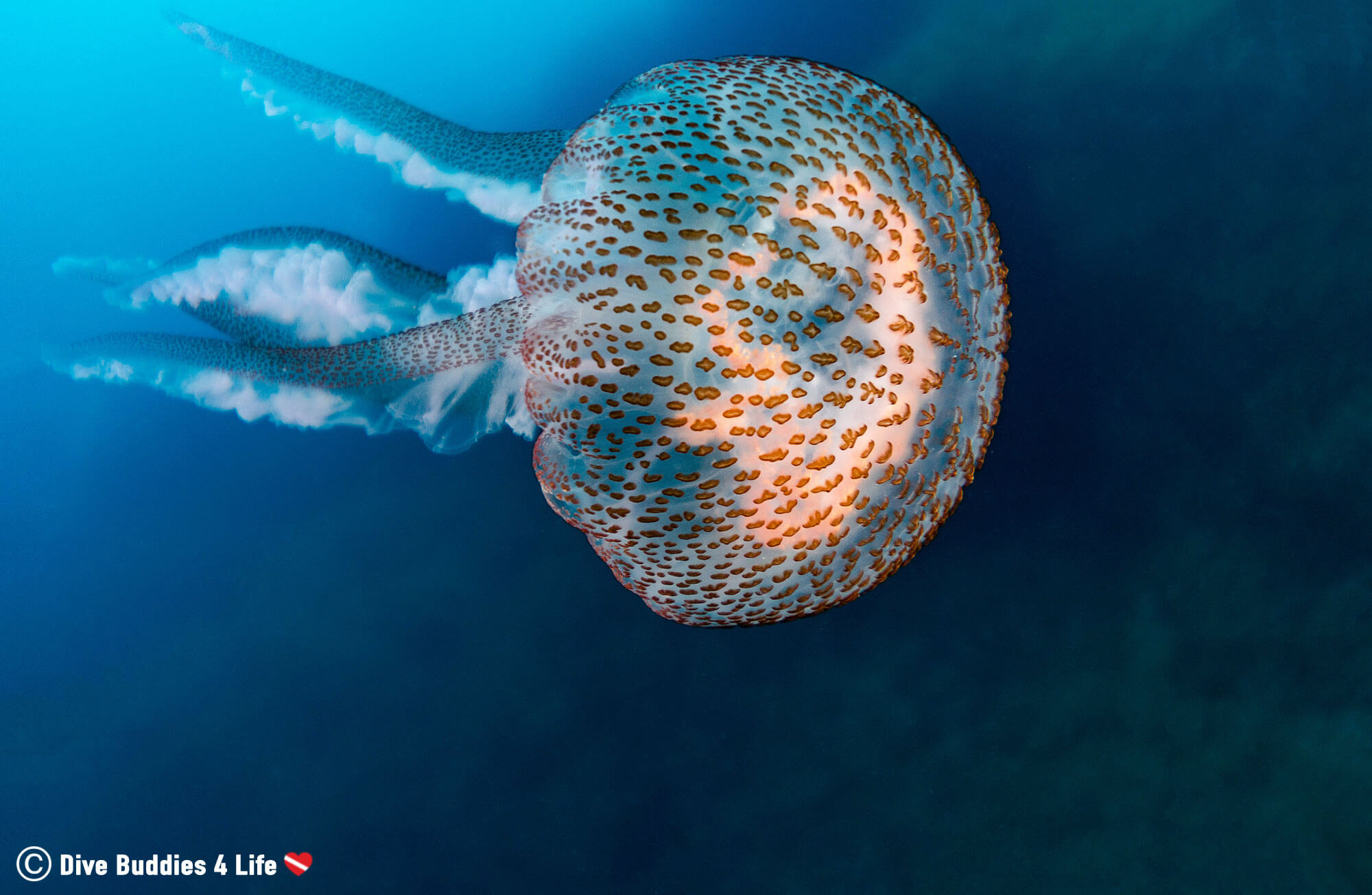 Where in the World can you find Jellyfish?

From the warm sunny waters of the ocean surface to the deep dark sea, different species of jellyfish can be found in every corner of the world. And they aren’t all marine. Some types of jellyfish have even evolved to populate bodies of fresh water like lakes and rivers.

Take a look at the map below to see where they are typically found: 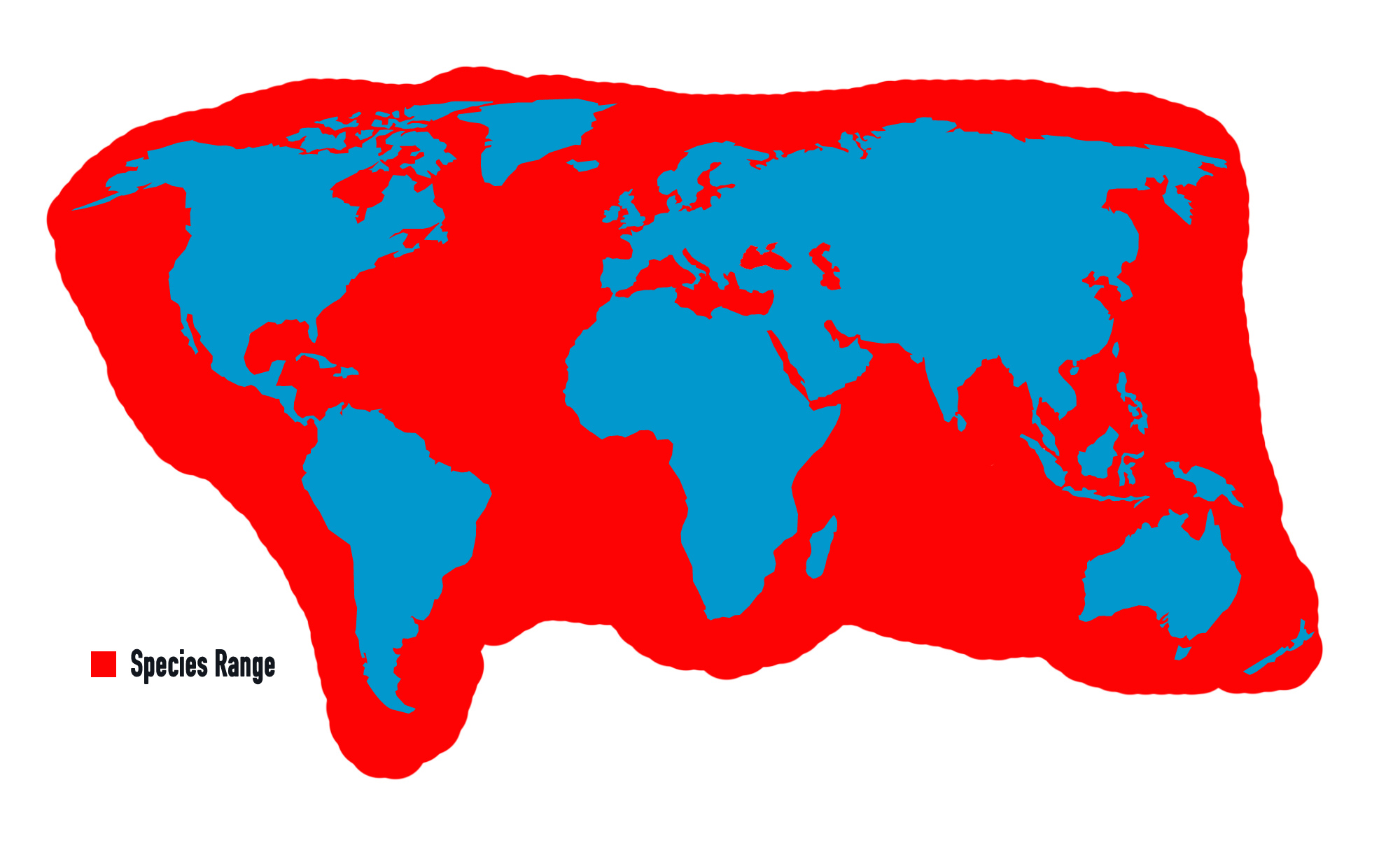 On top of being found in every ocean of the world, jellyfish also come in a variety of shapes, sizes, and colors.

One of the biggest species of jellyfish is called the Lion’s Mane jelly (Cyanea capillata). The Lion’s Mane can have a bell measuring close to 1.8 meters (6 feet) in diameter as well as tentacles and oral arms trailing behind it up to 15 meters (49 feet) in length. Yikes!

While the Lion’s Mane jelly is one of the largest and longest species of jellyfish on the planet, you’d be lucky if you didn’t need a microscope to see the smallest. The Creeping Jelly is considered the tiniest recorded jellyfish species. The Creeping Jelly (from the genera Staurocladia and Eleutheria) has a minuscule bell diameter measuring only 0.5 millimeters across and tentacles that are not much longer.

A jellyfish is made up of three main parts; a bell, oral arms, and tentacles. 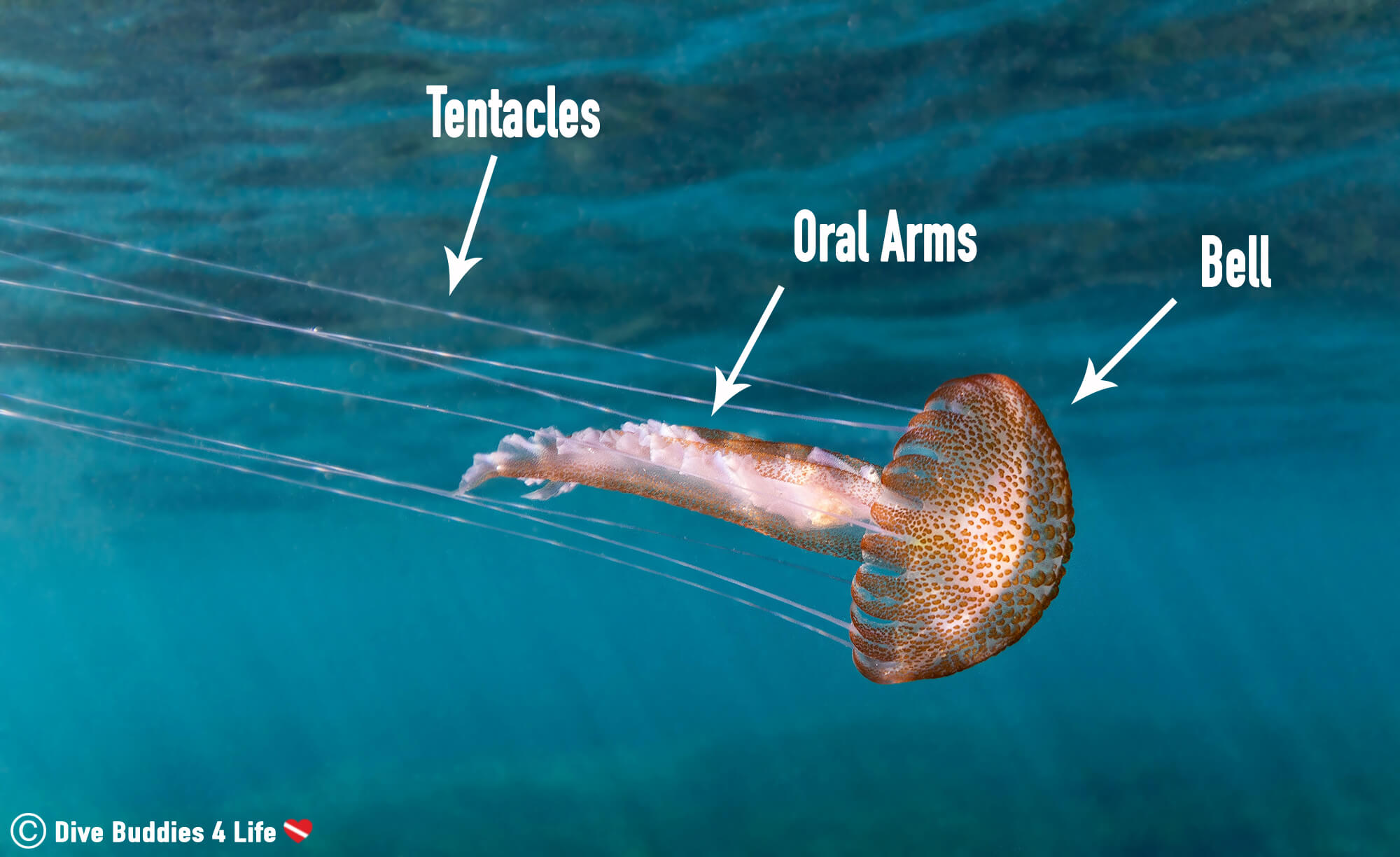 The bell (also called hood) is the primary body portion which often looks like an umbrella. This hood houses all the jellyfish’s simplistic organs including a nerve net (which is a basic version of our brain and nervous system), gut (the digestive-excretory system), circulatory system and osmoregulatory system (used to absorb and filter water in and out of the jellyfish’s body).

The oral arms connect to the main body stalk, encircling the gut in the center of the jellyfish. They help form the opening to the oral cavity where food is consumed and excreted. In case you haven’t figured it out, yes it does mean a jellyfish eats and poops from the same hole. The tentacles are the stringy spaghetti-like filaments that trail behind the jellyfish and catch its prey.

It is sometimes difficult to differentiate between the oral arms and tentacles and most people think they are one in the same. The biggest thing to remember is even though both appendages have the potential to sting; the oral arms encircle to the mouth/anus of the jellyfish, while the tentacles are thinner and form the outer part around the bell. 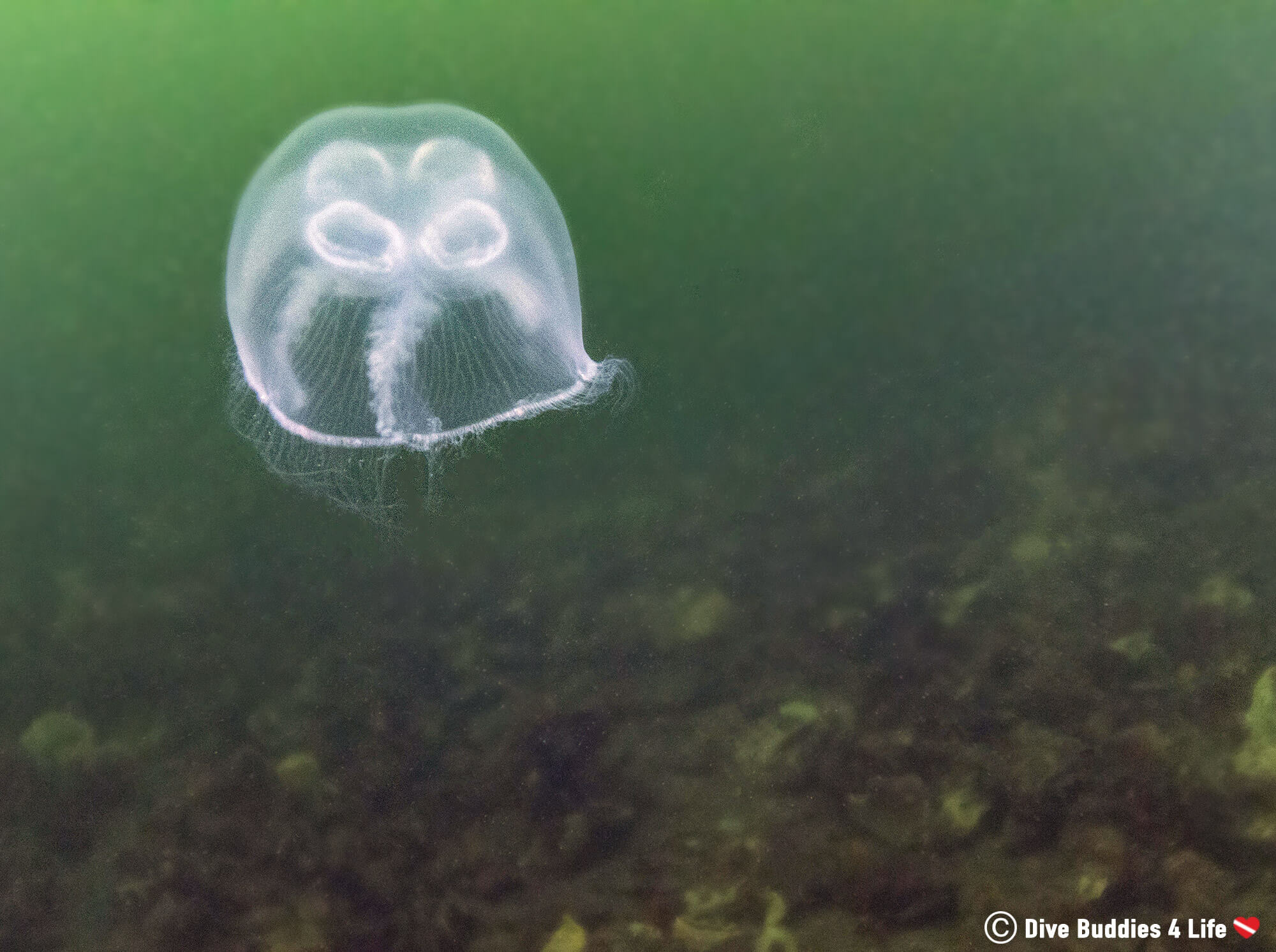 How Jellyfish See and Move

As lifeless as jellyfish may seem in the water, floating along at the mercy of ocean currents, these animals do have a sense of directionality and the ability to propel themselves.

Specialized eyes located around the outer edge of their bells enable jellyfish to sense their environment and navigate up, down and around obstacles. While not as specialized as human eyes, these light-sensing organs see light and dark shadows, and in a box jellyfish, can even go as far as seeing color.

In addition to their eyespots, jellyfish can move throughout the water column by using a combination of muscle and osmoregulation. They radially expand and contract their bodies expelling jets of water behind them to move forward. Jellyfish are so good at propelling themselves around that they are considered one of the most energy efficient swimmers in the animal kingdom.

The Jellyfish and You:

Jellyfish are passive animals do not purposely try to harm humans.

They do, however, possess specialized cells found in their oral arms and tentacles that can sting. These stinging cells are called nematocysts, and they are triggered to sting upon contact.

The potency of the jellyfish sting is entirely species-dependent. Different types of jellies have different lengths of nematocysts as well as different venom toxicity. Stings from species such as moon jellies and nettles could range from a dull tingle to a small rash, whereas brushing up against a highly dangerous box jellyfish could leave you in severe pain and potentially even result in death.

It’s not by choice that jellyfish sting us, their tentacles simply have pressure-sensitive cells that are wired to sting upon contact. 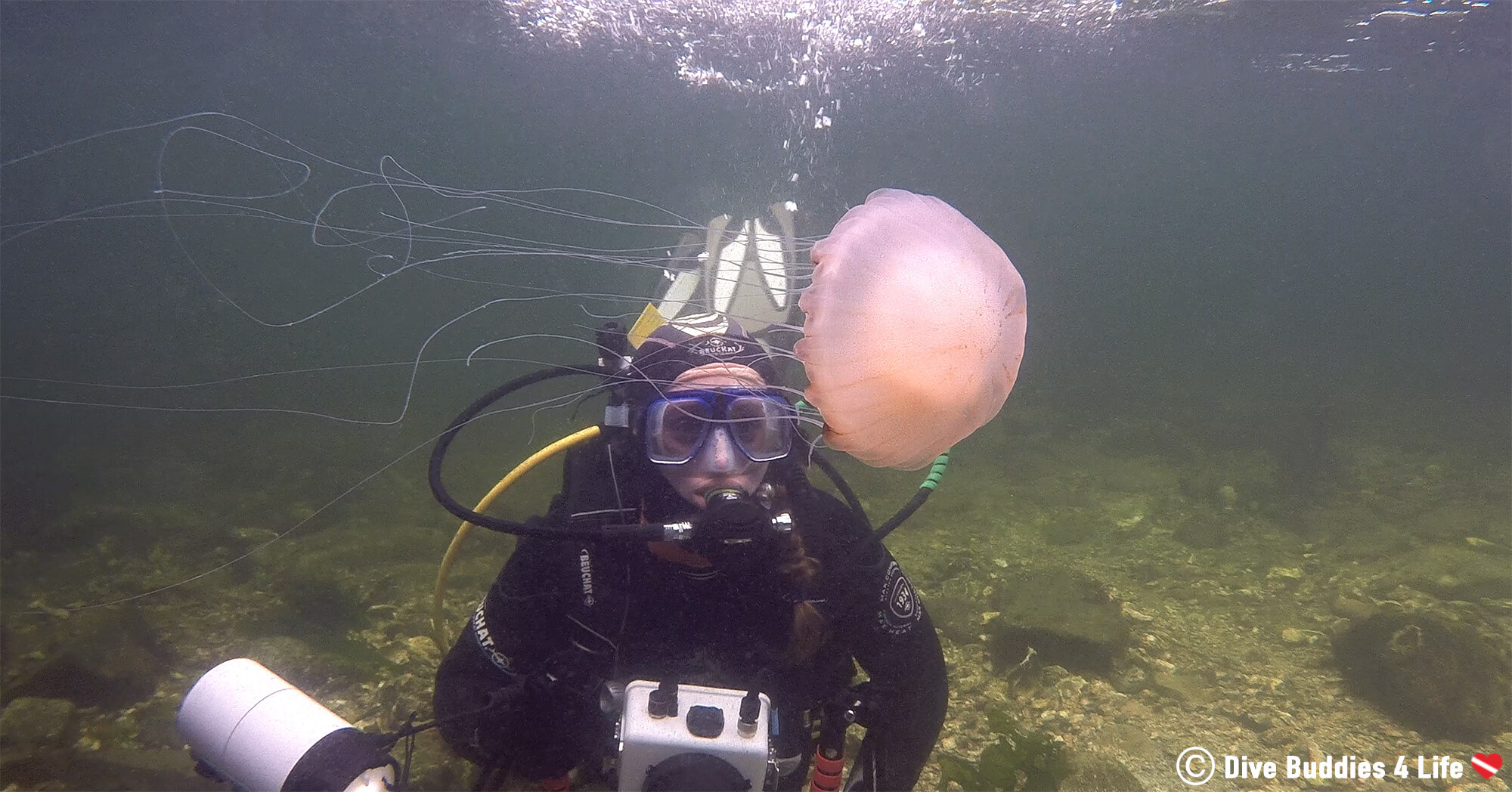 The best way to avoid dealing with jellyfish and the nasty stinging punch they pack is to pay attention and familiarize yourself with the beach you are swimming at. Listen to the news, talk to locals and pay attention to warning signs often posted at beach entrances. These signs are excellent indicators of any hazards in the area. Also, keep in mind that jellyfish tend to move to coastal regions as the water temperature heats up.

What to do if you get stung:

The Blooming Future of Jellyfish

Large pelagic fish and sea turtles are few and far between. The planet is slowly heating up thanks to climate change. Pollution is creating all sorts of inhospitable “dead zones” in the oceans. The aquatic environment is changing drastically setting the stage for the rise of the jelly.

While jellyfish blooms have come and gone in the past, within the last eight years, huge unprecedented blooms have been popping up. Large expanses of coastlines and beaches have been closed in the Mediterranean Sea, the Black Sea, the Gulf of Mexico, and the Yellow and Japan Seas. Nuclear power plants in Scotland, Israel, and Florida have been forced to shut down because of nuisance jellyfish clogging up the water inlets.

The jellyfish is thriving and we are helping it.

With climate change, comes the rise in ocean temperatures which encourages jellyfish reproduction. Because of overfishing, we have caused a shift in the marine food chain and with that, jellyfish predators are less numerous than they use to be.

Jellyfish are adaptable and well equipped to survive much of what the world throws at them. They can survive in conditions with little to no food for months, they can live in oxygen sparse water. They even seem to succeed in all sorts of polluted and fouled conditions.

Will jellyfish be the next kings of the sea? Well, they’re not exactly fun to swim with but the future does look blooming for these spineless animals. 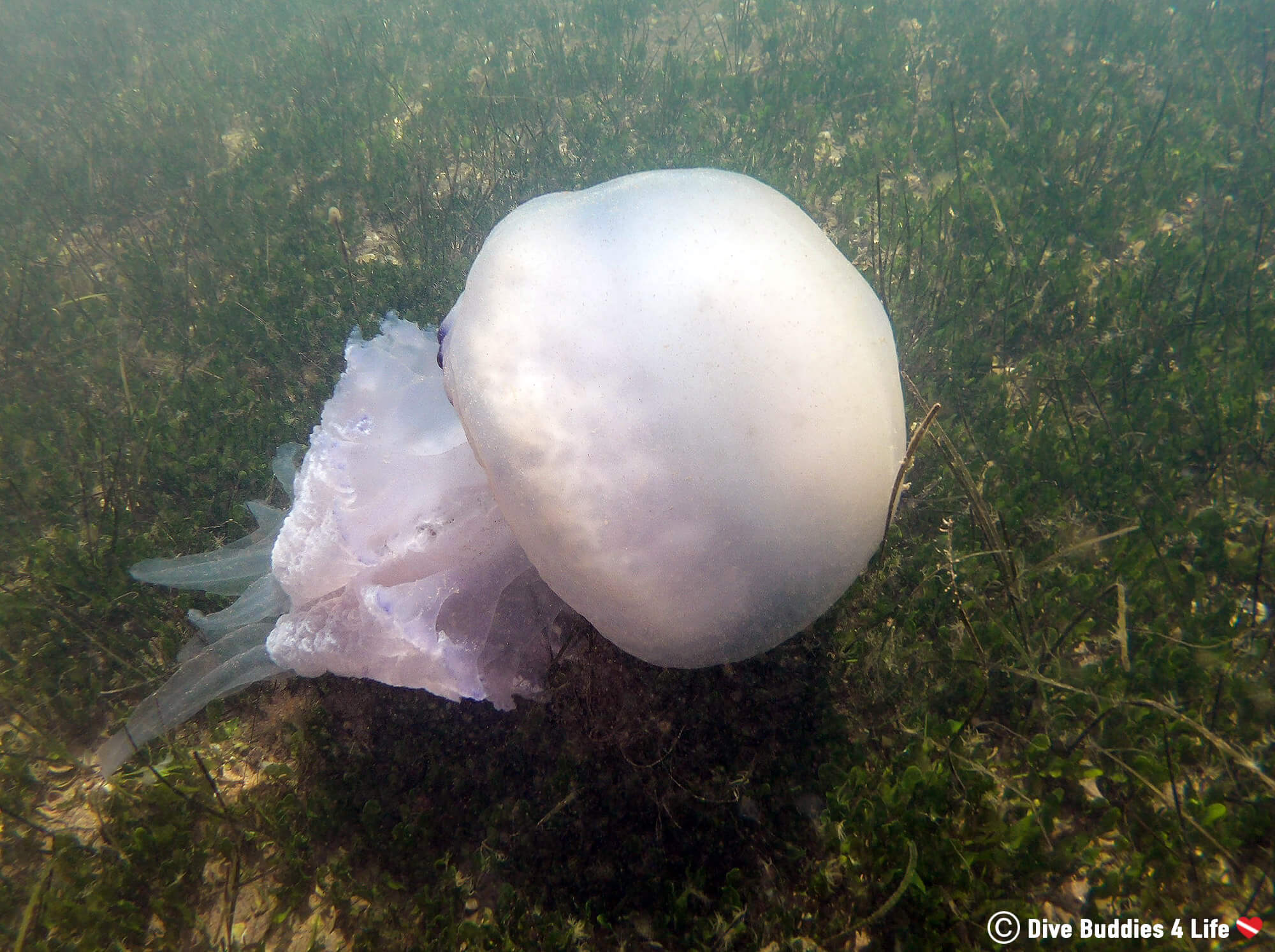 Writers Note: Thank you to the one and only Eric Ng, an aquarist from Ripley’s Aquarium of Canada, for reading over this post and offering improvements and suggestions. Your knowledge and love of all things jellyfish is one-of-a-kind. You truly are the Jelly King! 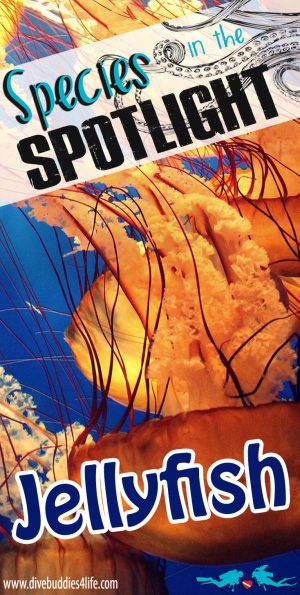